How Mazda matched colour with design 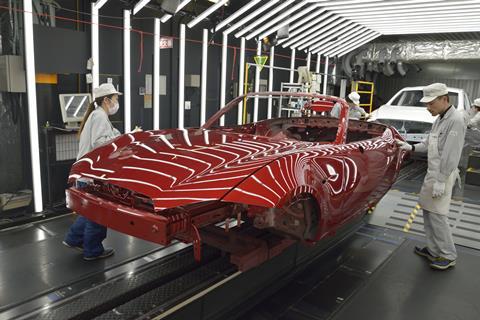 Starting with Soul Red Metallic and later Machine Grey, Mazda created these premium colours to fit its Kodo: Soul of Motion design philosophy. The company says its aim was to create a coating with a mix of translucence and depth of colour. To deliver this, a three-layer coating structure has been devised by the engineering team. This consists of a semi-transparent paint layer coated on a reflecting layer comprised of regularly arrayed aluminium flakes. A clear layer that emphasises translucence is then coated on top of the paint layer.

Mazda says to reproduce the colour intensity of Soul Red faithfully and keep the colour consistent on the whole of the body surface, the thickness of the coating has to be precisely controlled. To achieve this the company has developed a process it calls Takuminuri (Takumi: master craftsman, Nuri: painting). This uses data obtained through the simulation of painting done by experienced human painters – such as the distribution of coating thickness ― to improve robotic painting. 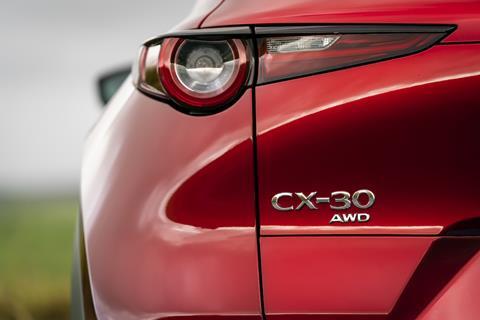 Building on the Takuminuri technology and with the idea to create the “world’s most beautiful red”, Mazda says its designers studied how people perceived colour and light and translated this ideal red into numerical values based on ergonomics to spray with the company’s Aqua-tech system. In light of the data, the painting process for each part was reformed and a new control system was developed. The development of the Takuminuri process has also been important in enabling the application of the Soul Red paint coating in mass production. 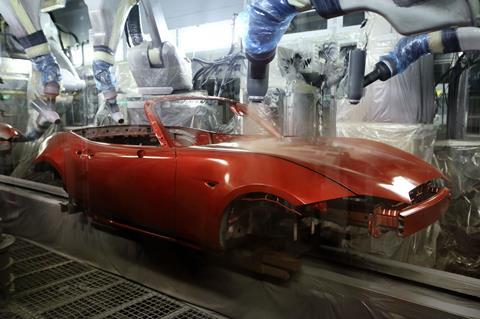 Another important factor in the coating development was ensuring the reduction of the environmental impact of the painting process in keeping with the brand’s long-term Sustainable Zoom-Zoom 2030 vision. Not wanting to add a fourth layer of paint due to its environmental impact, Mazda’s design experts where able to combine light-absorbing flakes along with high-brightness aluminium flakes in a single paint layer to create more depth and saturation while retaining its low environmental impact credentials.

Masahumi Shinoda, a veteran engineer with a 25-year career in car painting, summed up the challenge of creating Soul Red like this: “The accumulation of innovative technologies that Mazda has developed so far. Collaboration among the paint maker, production engineers, technology research engineers, body design engineers and designers. If either of these two had been lacking, it would have been impossible to apply Soul Red to mass production cars.

Evolving the coating and process

The next development of this theme is Soul Red Crystal. The paint retains a simple three-layer structure comprising clear, translucent and reflective coats, but represents an evolution of the Takuminuri painting technology, says Mazda. The reflective layer, which contains extremely thin, high-brightness aluminium flakes, shrinks during the drying process to about one-quarter the thickness of most reflective layers. This causes the flakes to lie flat with regular spacing between each flake for a high-density finish that gives the entire surface a sheen when illuminated and a genuine metallic look. 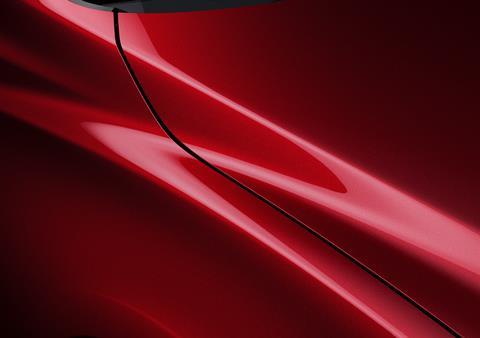 This story was first published on Automotive Manufacturing Solutions.

Last year, CDN spoke to Mazda’s global head of design Ikuo Maeda – the creator of the Kodo design language. He explained the approach in more detail, and outlined the “next phase” for Mazda.