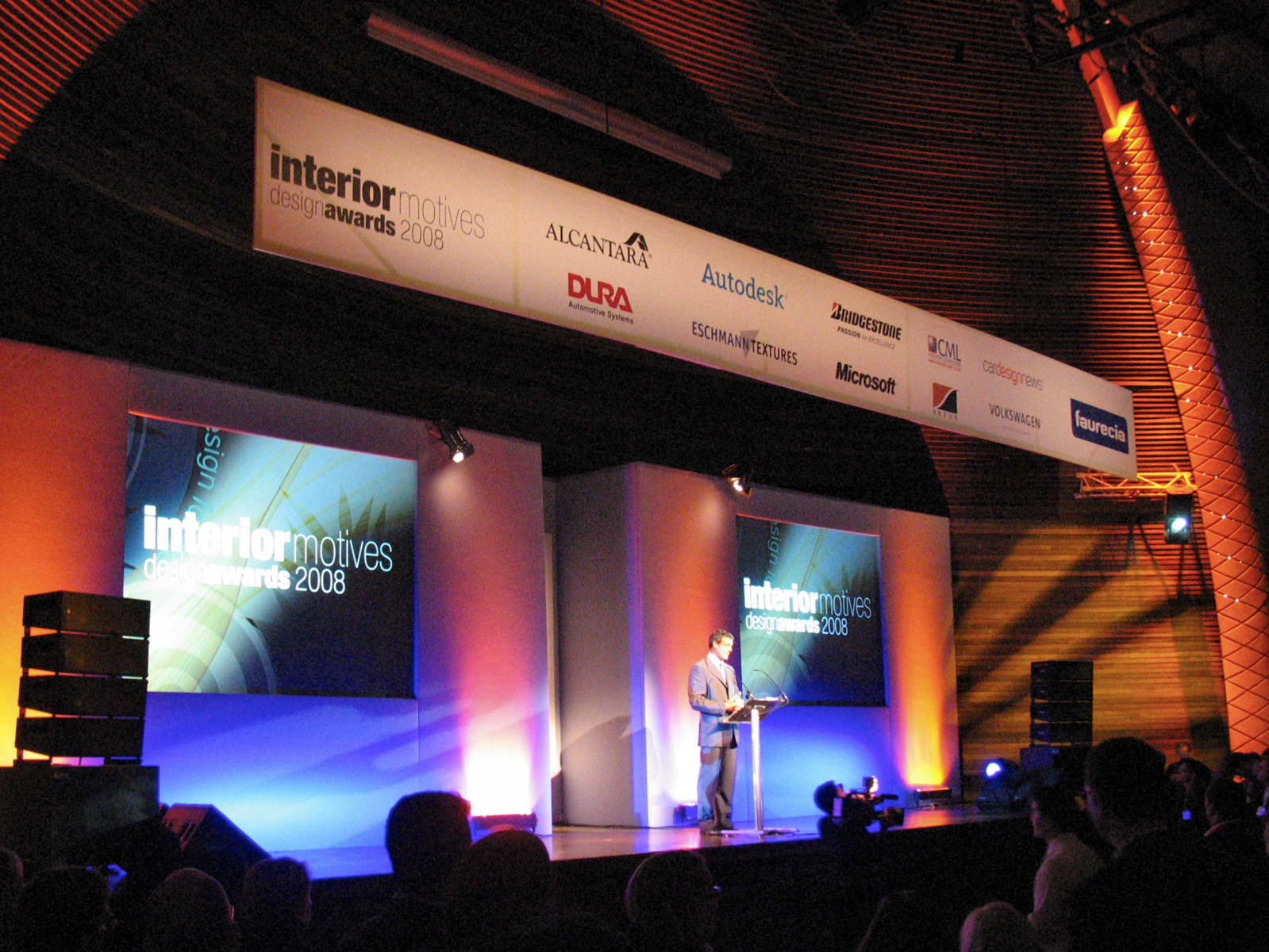 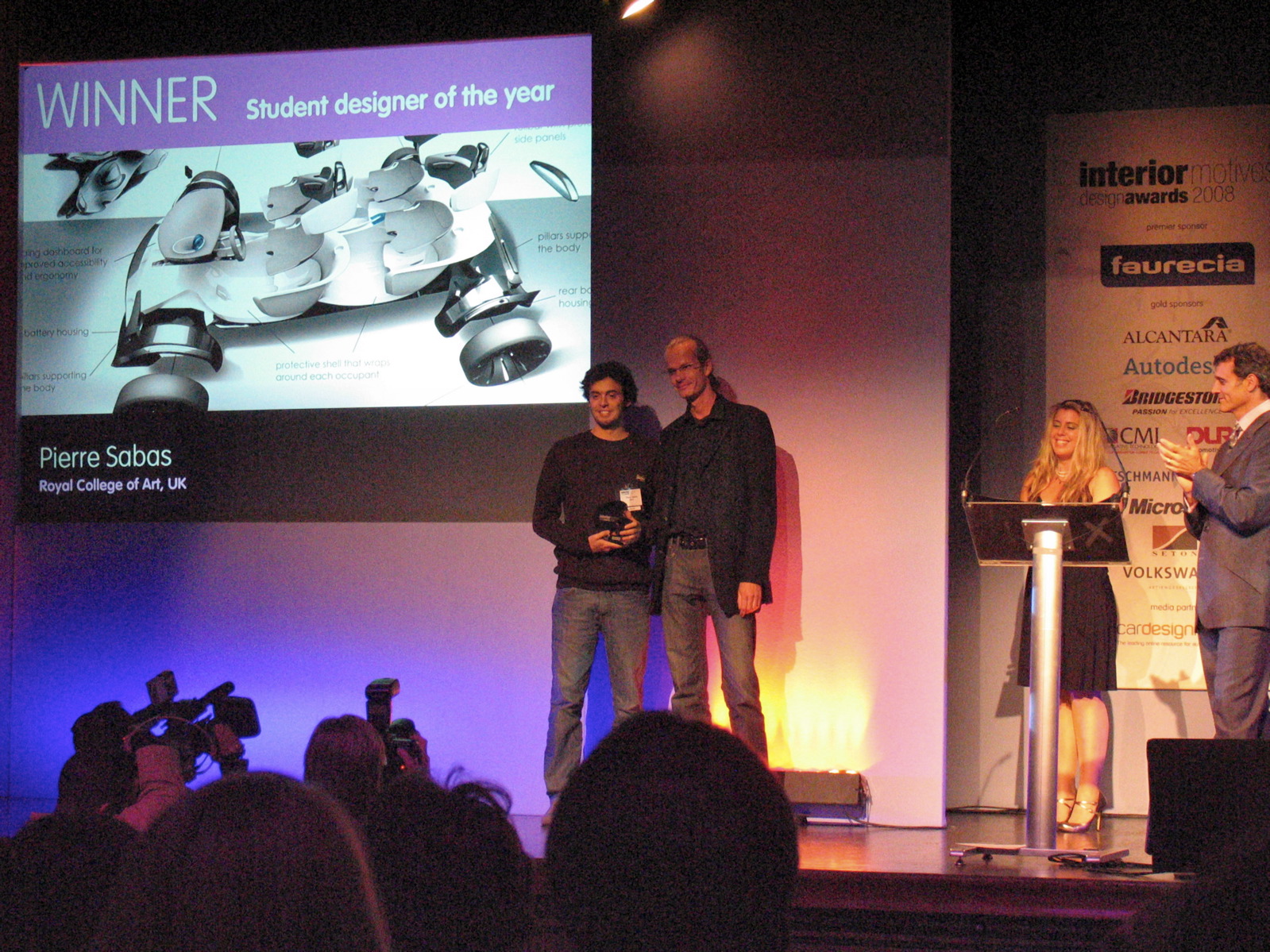 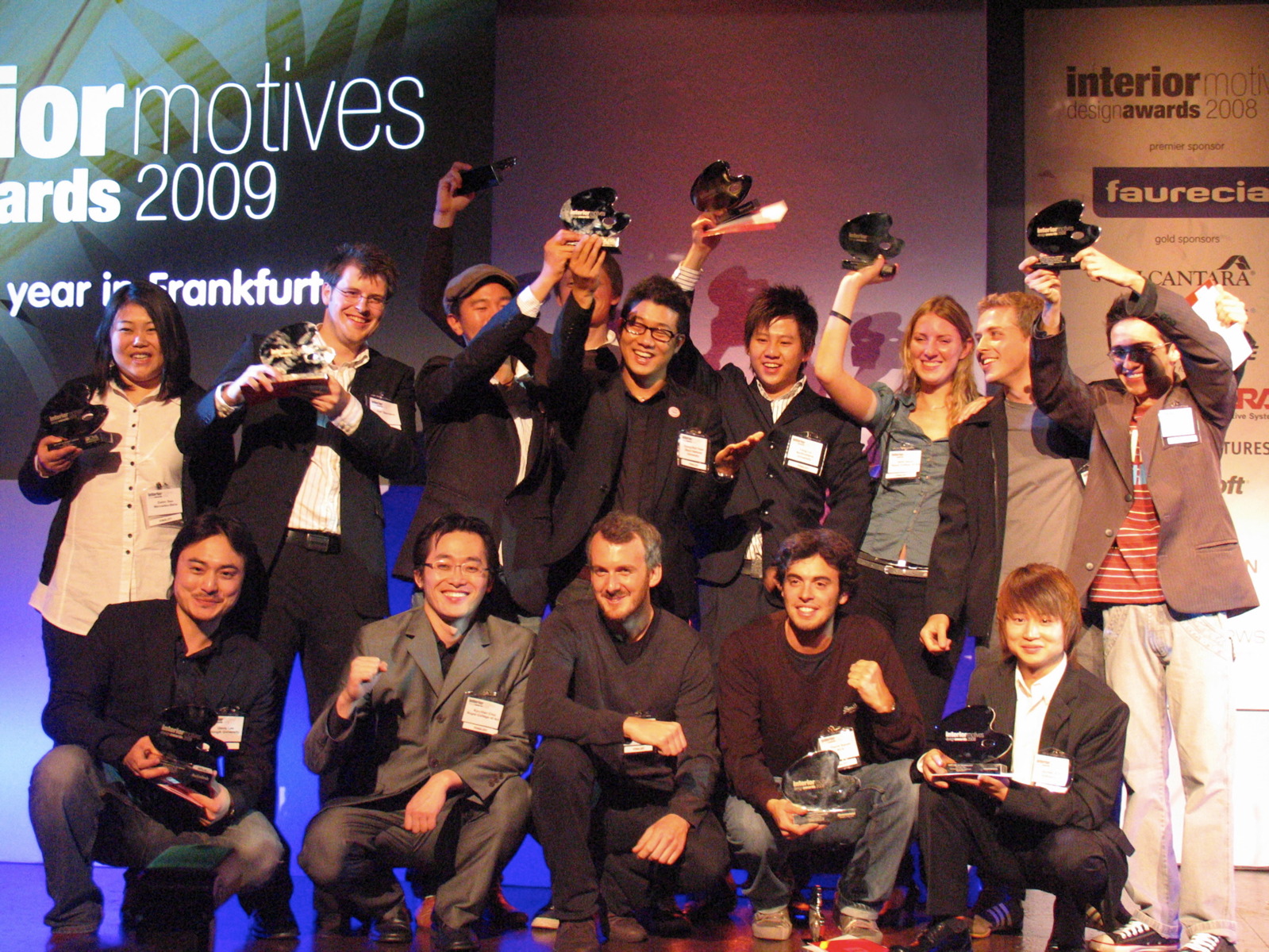 The winning students pose for a group photo 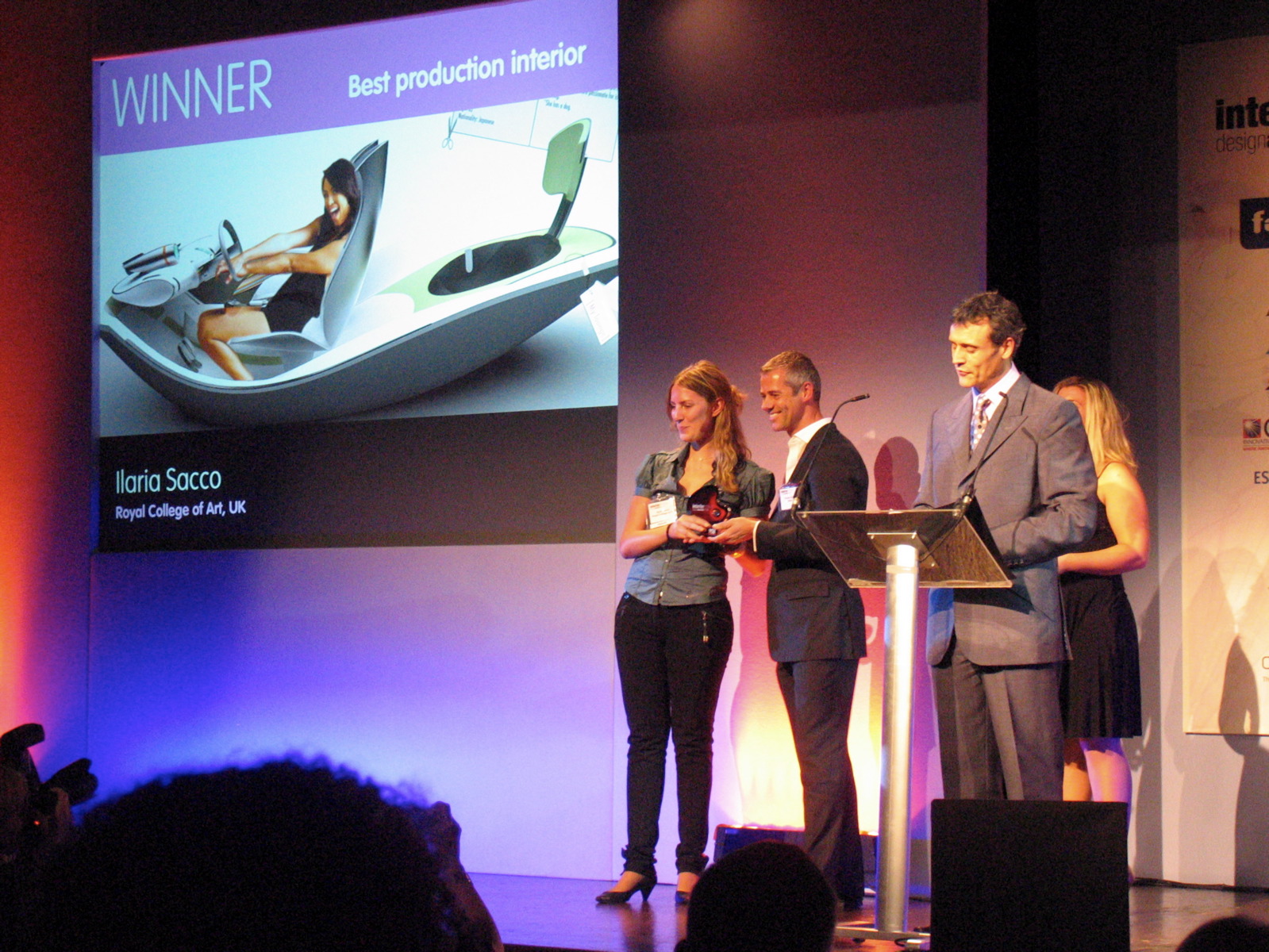 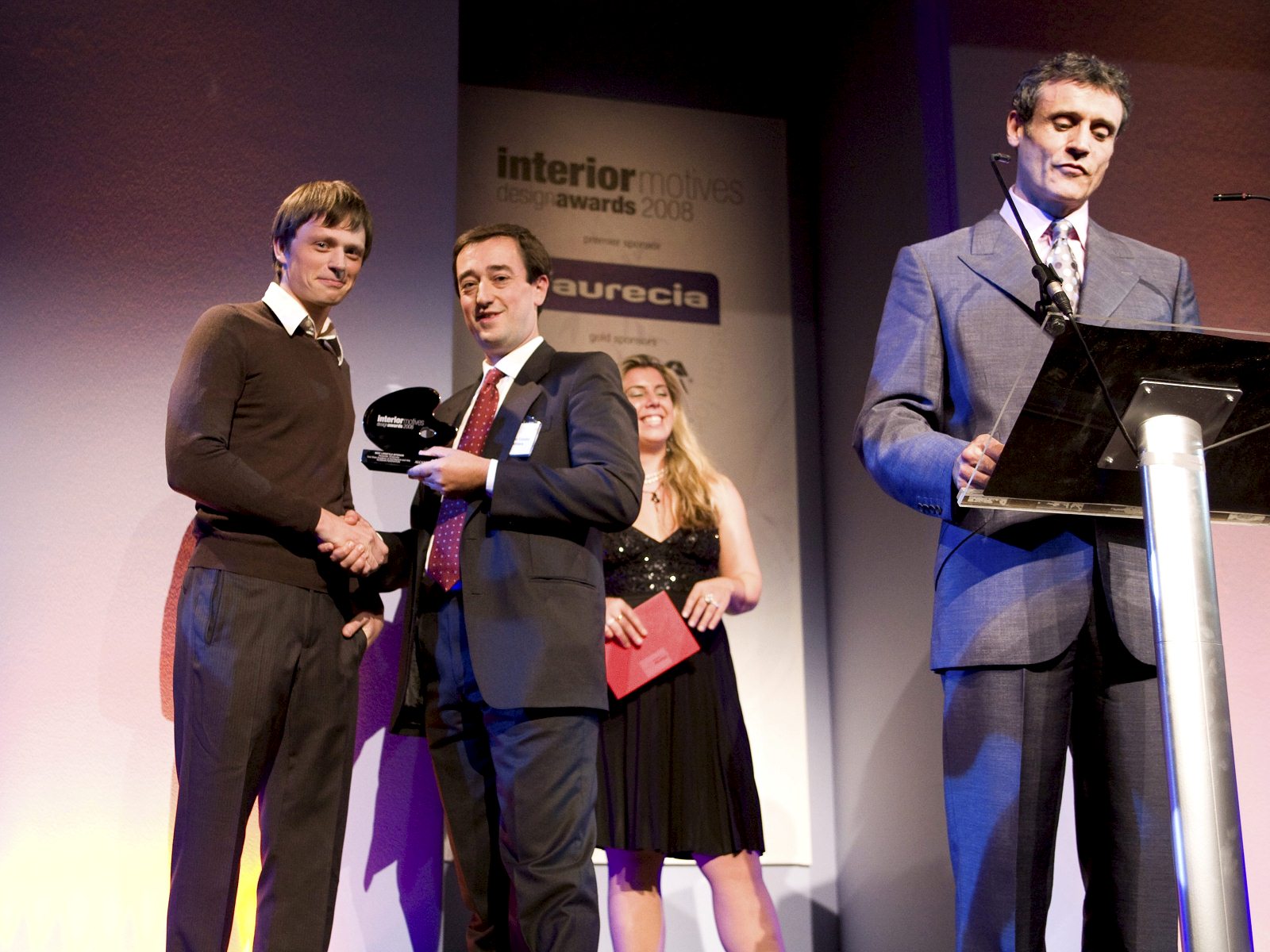 Alexander Zhukovsky walked away with the trophy for Best Lifestyle Interior, presented by Lorenzo Covini of Alcantara 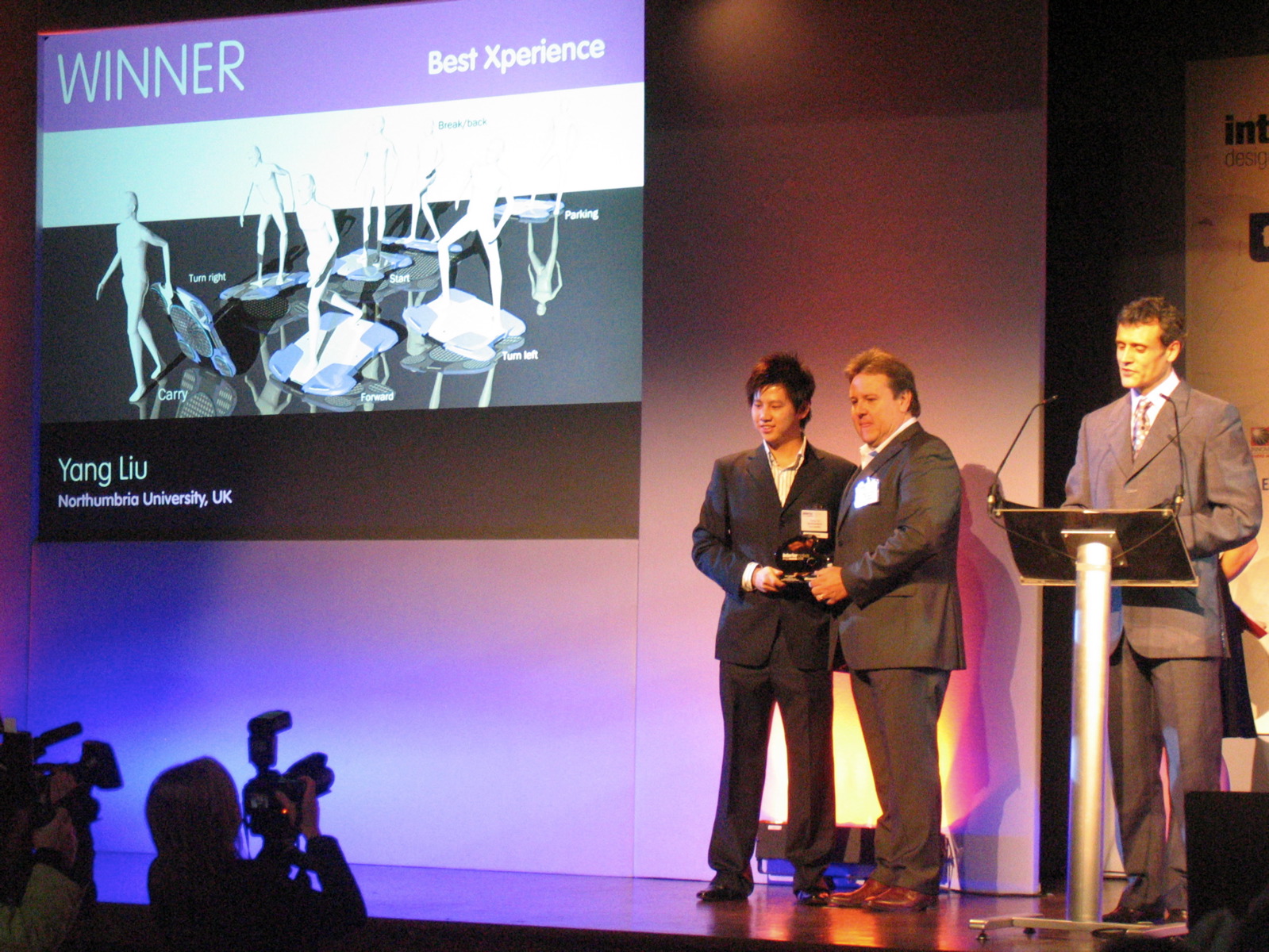 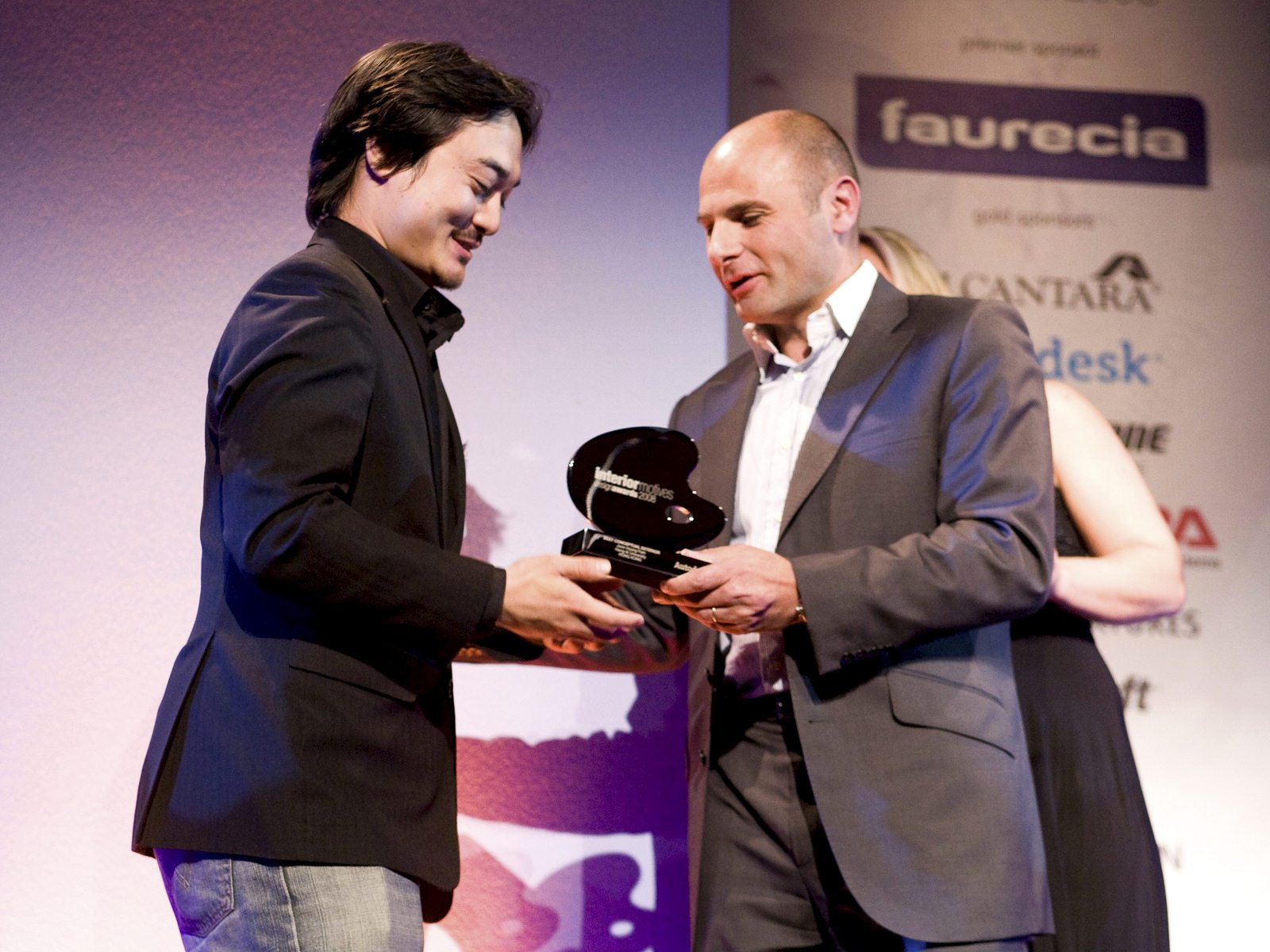 The second press day of the Paris motor show once again coincided with the annual Interior Motives Design Awards, a competition open to student designers around the world and now in its sixth year. A jury made up of high-ranking design professionals, including the likes of VW's Flavio Manzoni and Faurecia's Andreas Wlasak, selected winners in the following 11 categories: 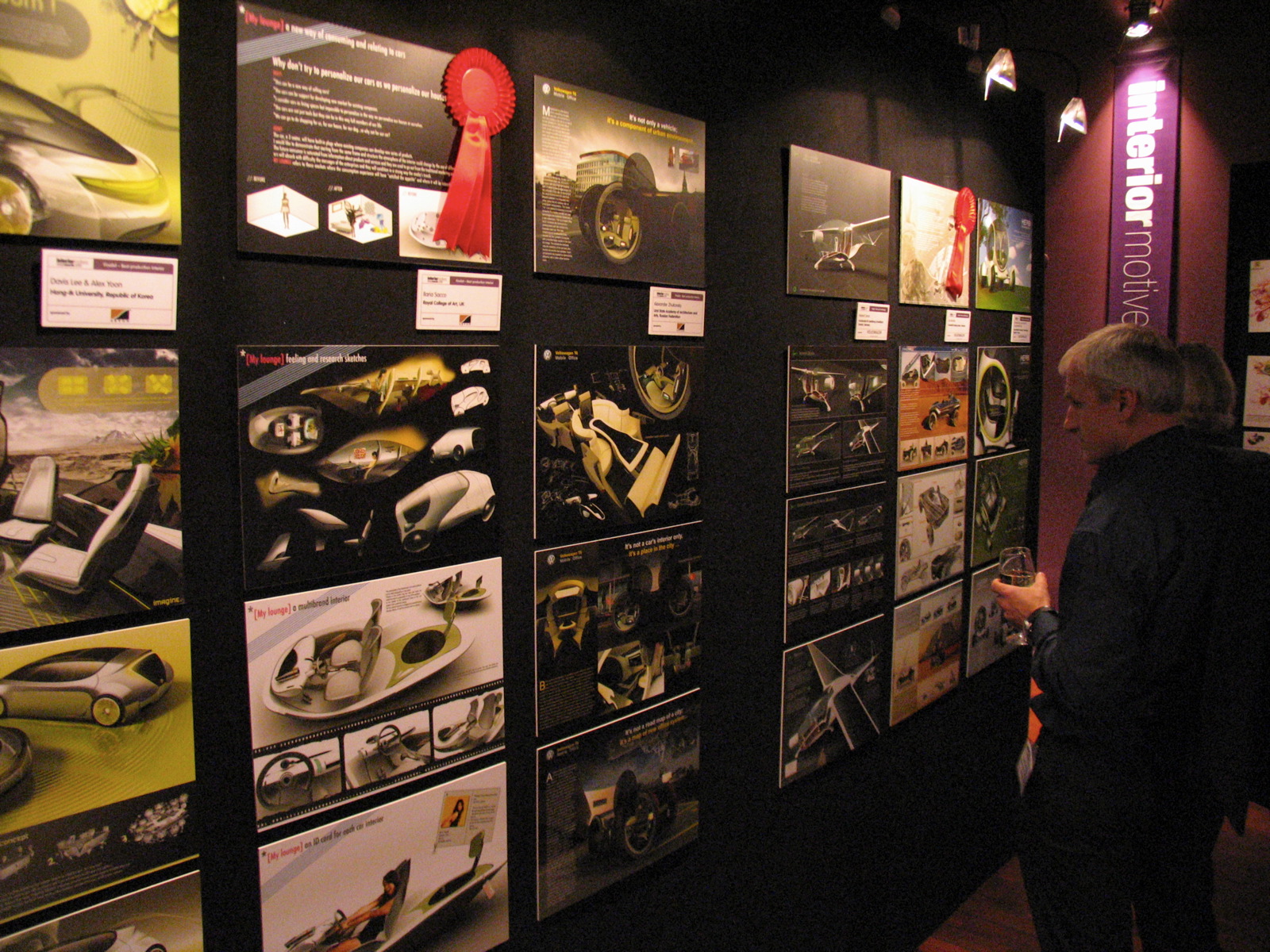 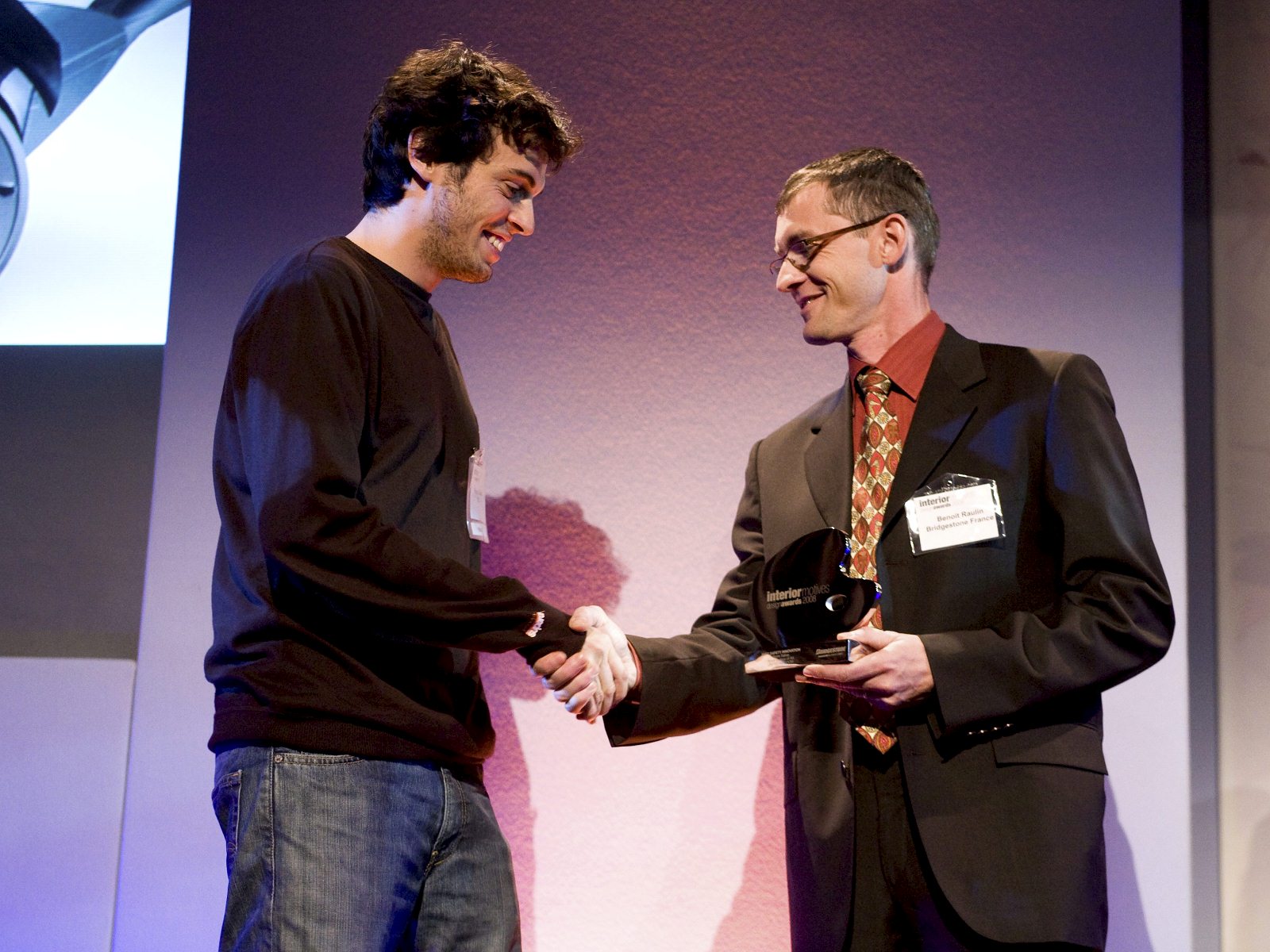 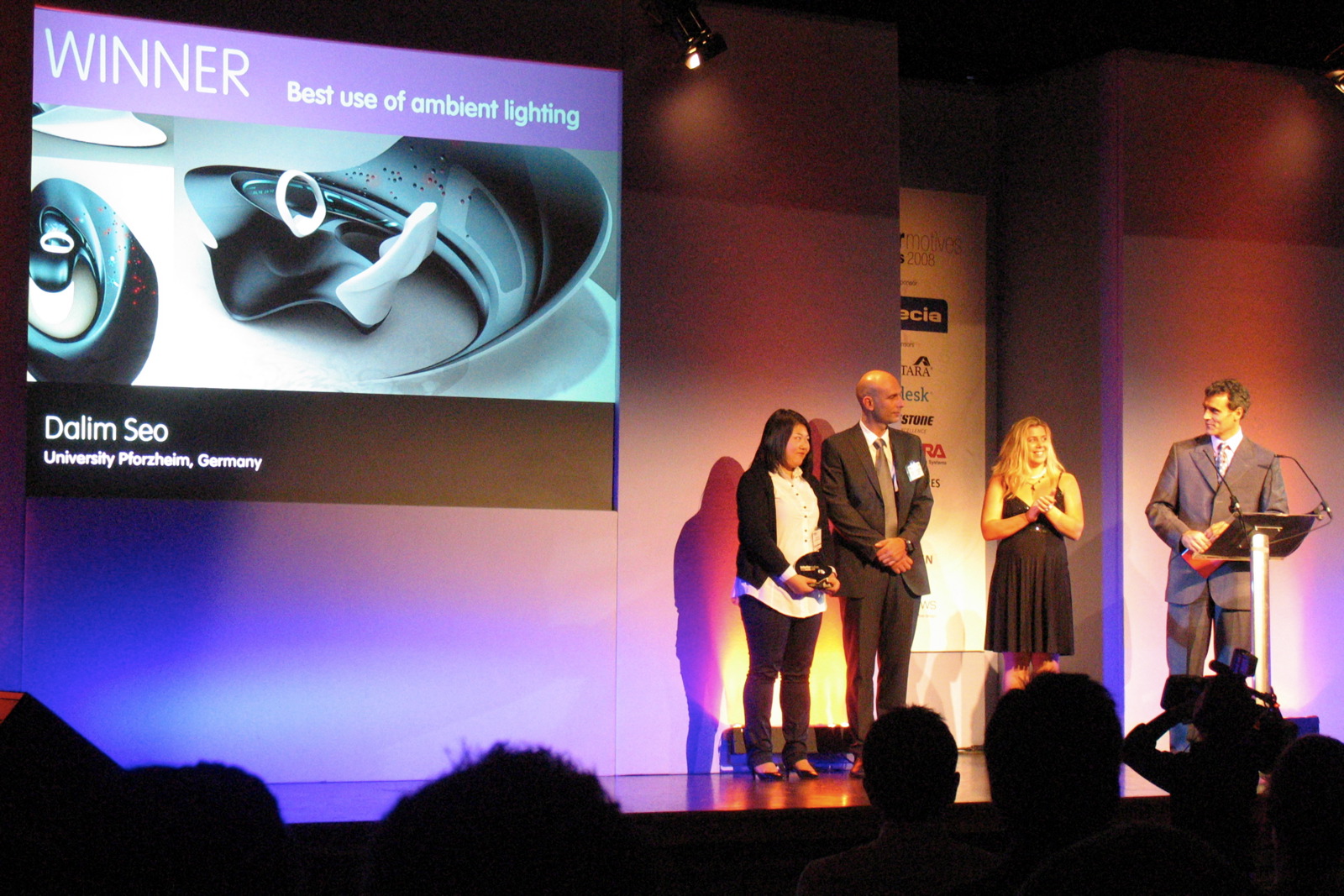 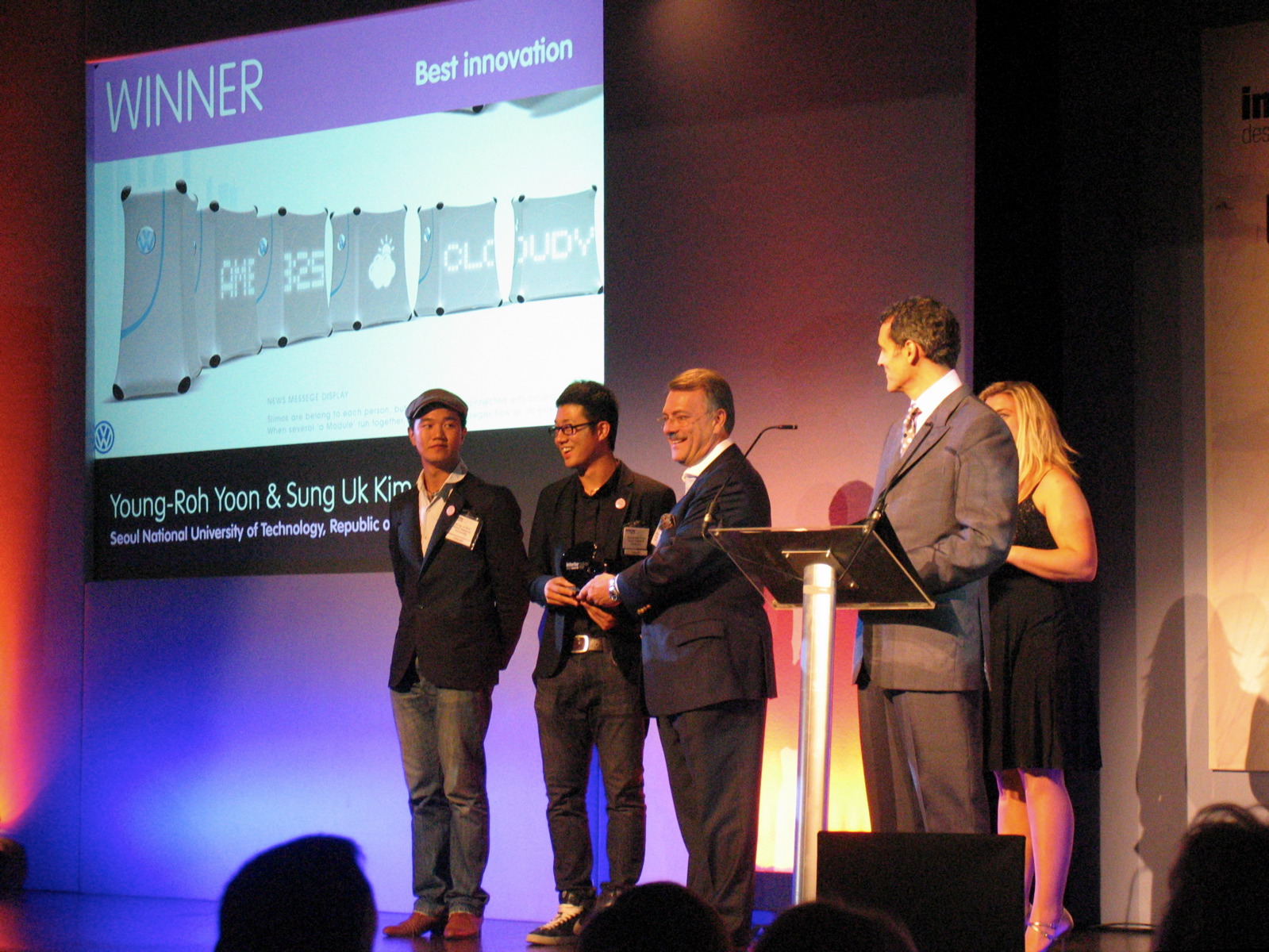 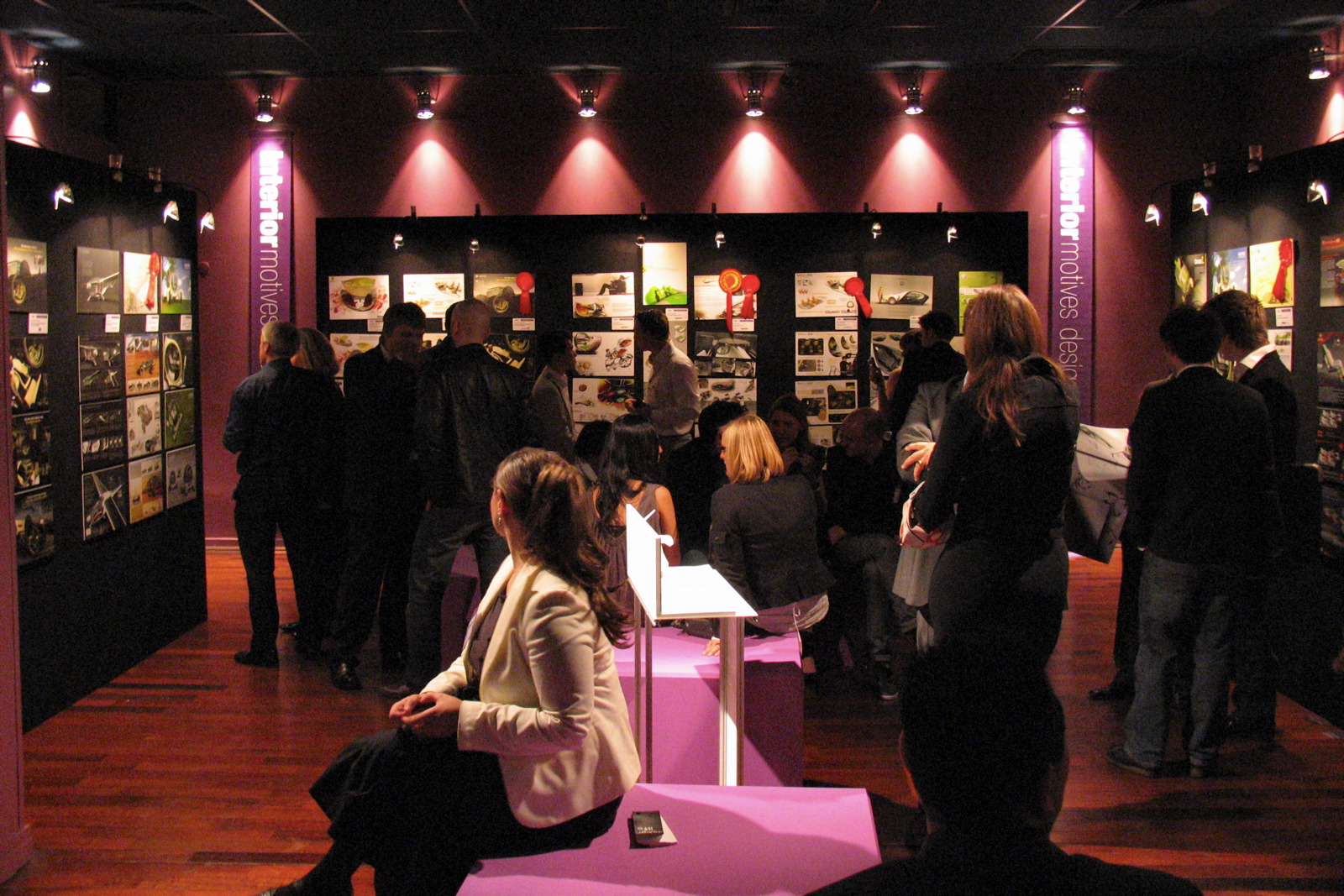 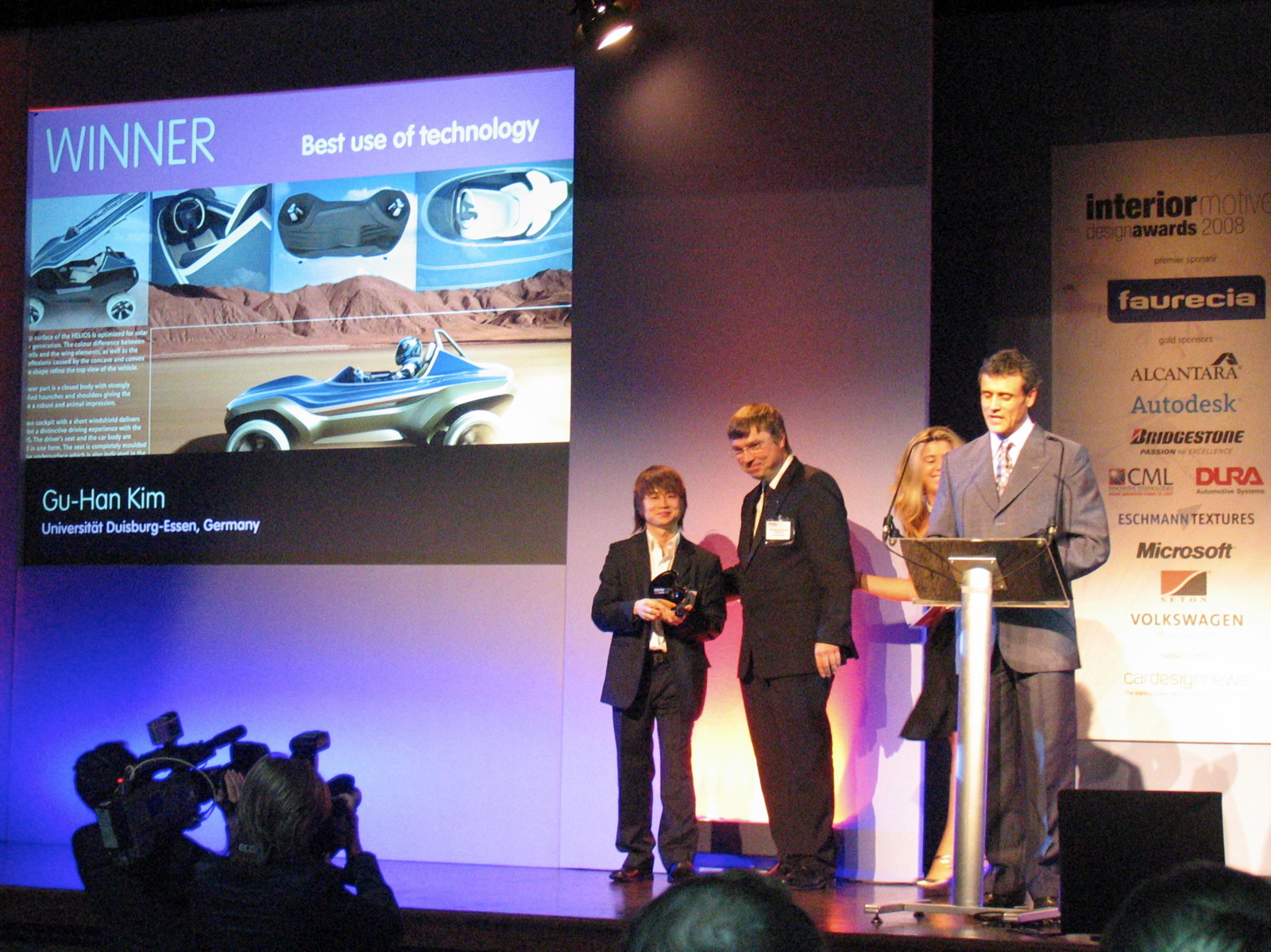 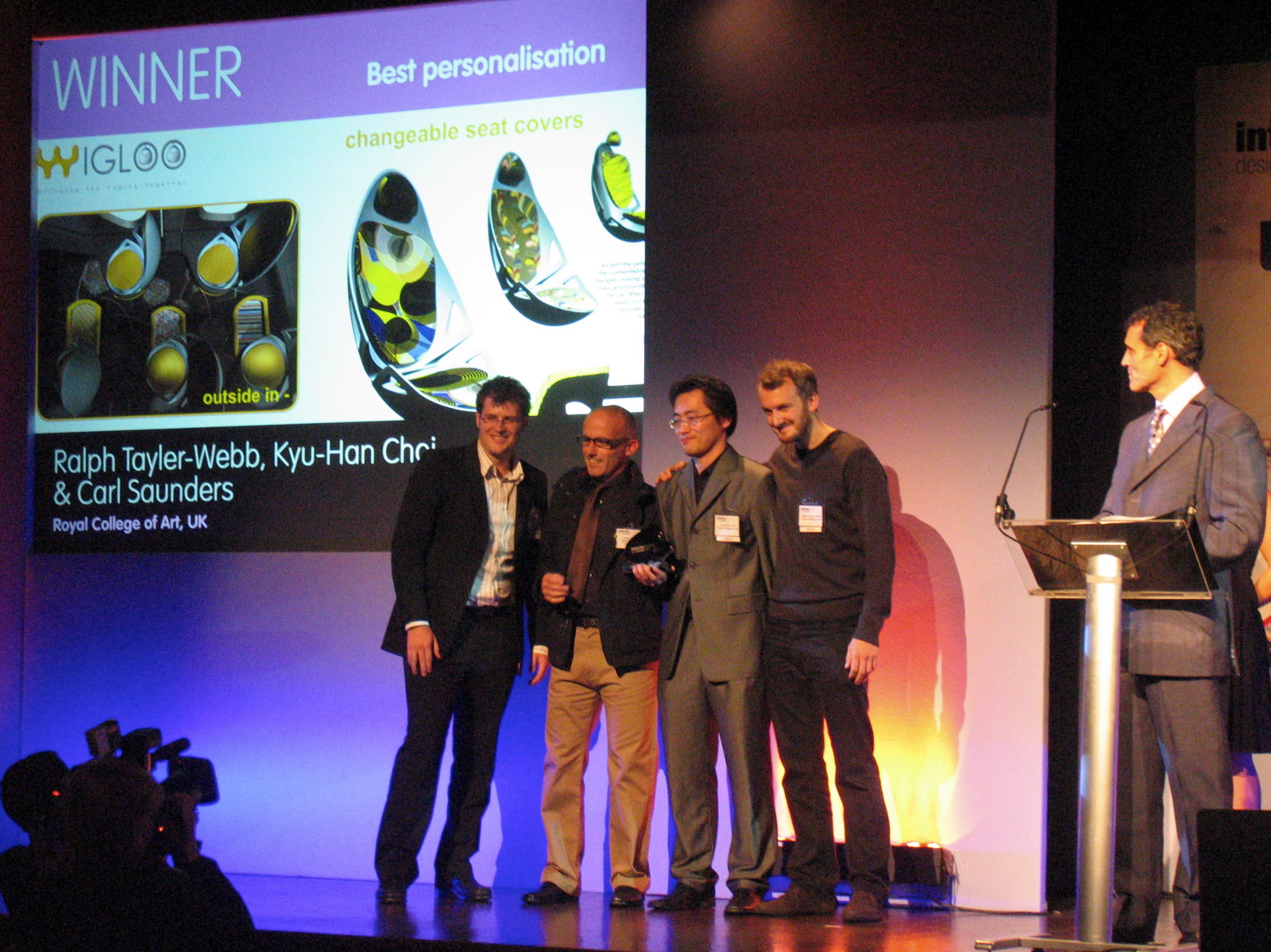 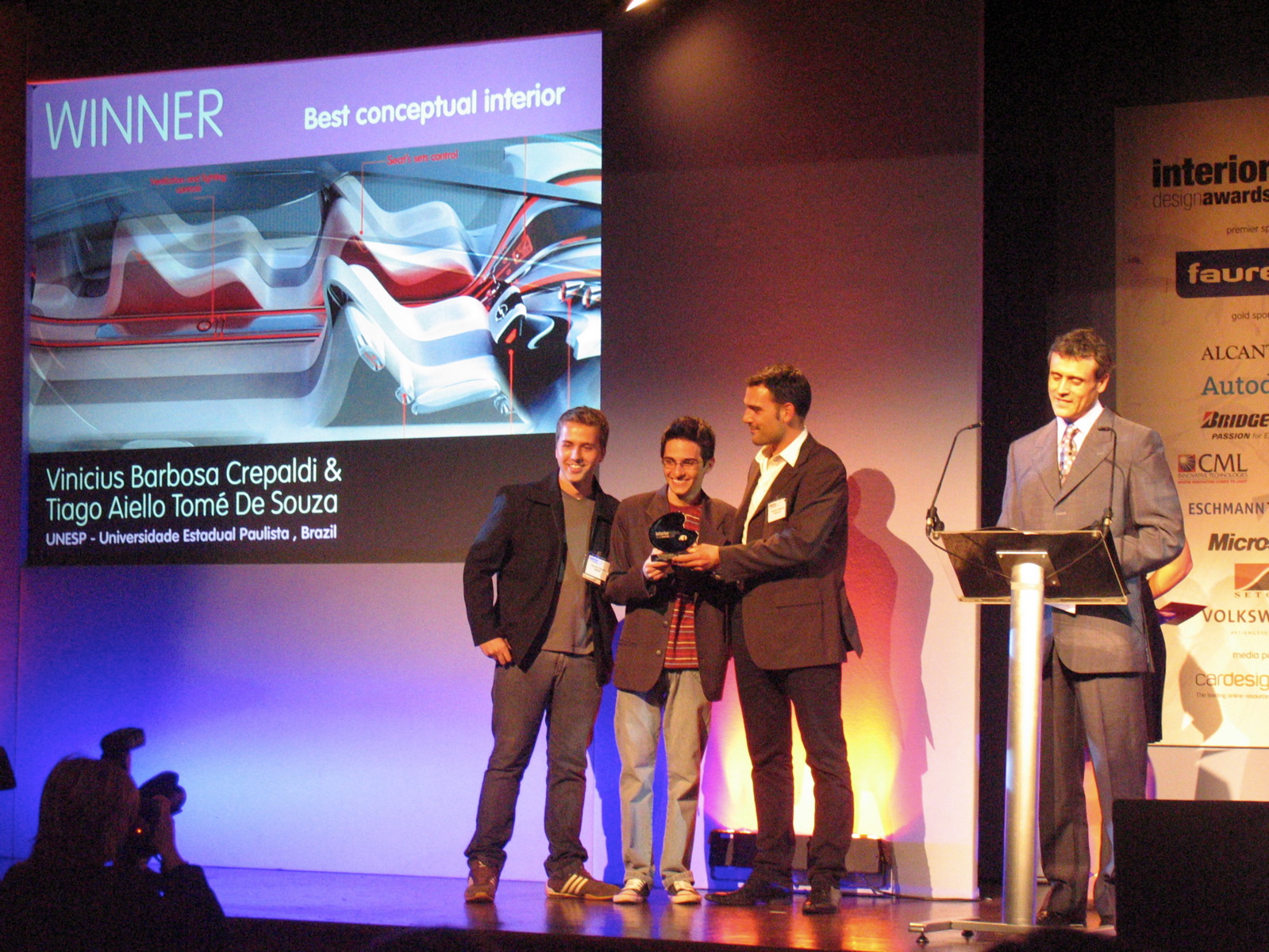 The title of 2008 Student Designer of the Year - and the grand prize of $5000 - went to the Royal College of Art's Pierre Sabas. His four-seater Free Form coupe concept took an inside-out approach to design, consisting of articulated, interlocking seat elements designed to eliminate the need for bulky, constrictive exterior crumple zones, and a sliding dashboard for adaptable ergonomics. Wrapped by a pillarless, transparent four-door body that tapers to a point at the rear like a drop of water, the striking Free Form also won first prize in the Best Safety Innovation category.

The Best Use of Ambient Lighting award, meanwhile, went to Dalim Seo from Pforzheim University in Germany. SOUL proposes a future in which the car interior grows up and adapts as its driver ages, storing experiences as virtual memories that can be replayed at will.

Best Innovation went to Young-Roh Yoon and Sung Uk Kim of Korea's Seoul National University of Technology. Their Slimo concept pushes the boundaries of connectivity to create a scenario in which driverless modules use nanotechnology and shape-memory to create near-limitless interior variations, including a running machine (hamster wheel anyone?) and a mobile movie theatre.

In what was a very strong showing indeed by the RCA, another of its students - Ilaria Sacco - scooped the prize for Best Production Interior with a design study called MyLounge. Equipped with three seats and a series of modular ‘plugs' into which interior elements can be inserted at will, her concept envisions a time when fashion and product design brands will be as common in our cars as our homes.

This year's Best Use of Technology award went to a concept called Helios by Gu-Han Kim from Germany's University of Duisburg-Essen. A futuristic dune buggy, it featured an array of solar panels that fan out from its rear deck like the wings of a beetle.

A student at Russia's Ural State Academy of Architecture, Alexander Zhukovsky, walked away with the trophy for Best Lifestyle Interior. His VW T6 ‘Mobile Office' featured an unusual dual-cylinder exterior and an interior designed to combine luxury with state-of-the-art business functionality.

The title of Best Personalisation was awarded to Ralph Tayler-Webb, Kyu-Han Choi and Carl Saunders from the RCA. Their Wigloo minivan features an interactive robot interface similar to the Nissan Pivo 2's, as well as a versatile seating design and interior panels that use electroluminescent lamps and photochromic dyes to vary their appearance according to conditions.

Best Eco, meanwhile, went to Xiaosong Qian from the Beijing Institute of Technology in China. Their Leaf-Touch single-seater explored the use of light and bacteria as an alternative power source. Two students from Brazil's UNESP, Vinicius Barbosa Crepaldi and Tiago Aiello Tomé netted gold in the Best Conceptual Interior category with Siderium - a two-door, four seat coupe whose chairs are made up of symmetrical, motorised segments that rise up from below a superficial floor layer and can therefore face in either direction.

The Best Conceptual Exterior category was won by Joon-Hyung Park of Korea's Hong-Ik University, whose unusual Nepenthes sports car features a form inspired by a carnivorous plant. A new addition to this year's awards, the final category Best Xperience  (which focused on ‘experiential design') went to a fan-powered, 21st century take on the skateboard called I-Shoes, created by Yang Liu of the UK's Northumbria University.

With a field of entries that displayed real innovation and an excellent grasp of emerging technologies - in particular advanced materials - the Interior Motives Design awards is becoming an increasingly important showcase for student talent.