August 7, 2003 - Students in the senior Transportation Design class at Detroit's College for Creative Studies displayed their work in the annual Student Exhibition in May, the highlight of the academic year.

This years class of 19 graduating seniors were sponsored by the American Plastics Council (APC) and the Society of Plastics Engineers Automotive Division (SPE). Throughout the 16-week project, the CCS students were briefed on the benefits of designing with polymers by members of APC and SPE, and auto industry suppliers. They were then asked to apply that knowledge to some future vehicle of their choosing, using plastics in both obvious and subtle ways to accentuate the vehicles functional and aesthetic qualities.

"The innovative ways in which the students at CCS have used plastics in their designs confirm what we know…that future automobiles will feature a variety of plastics in new, exciting ways," said Bruce Cundiff, director of the APC Automotive Learning Center. Both exterior and interior designs were addressed. The final output from this project included scale exterior models, computer generated 3D models of both exterior and interior surfaces as well as sketches and other ideation. Also shown in each of the students presentations was work produced during previous semesters which included sponsored projects with Michelin, The American Iron and Steel Institute, and the University of Michigan.

Sung Paick’s Audi VDT project features the Audi motto “Vorsprung durch Technik” which roughly translated means: “Lead through technology.” This car certainly looks high tech. It’s overall simple shape, akin to DCX’s PT Cruiser, but sized more like BMW’s X-5, hosts details and surface features right out of Star Wars intergalactic spaceships and battle armor. Probably the most unique and fascinating aspect of Sung’s vehicle is the rear tailamp/ glass treatment. The thin, vertically oriented glass hatch and lower plastic door, along with the vertical 'blades' to either side suggest a very protective structure around the rear occupants, which when added to the slit-like tailamps give the rear a sinister helmet appearance. The vertical theme is mimicked at the front, drawing inspiration from the old pre-WW2 Auto Union racers. Access to the interior is through large gullwing doors. Another interesting feature is the exposed access covers over the strut towers, which allows adjustments to be made without opening the hood or talking the wheels off.

Erik Holmen’s Infinty roadster showcases a variety of plastic finishes and types in a vehicle that is both rolling sculpture and minimalist sports car, with dark Sci-Fi movie overtones in it’s execution. The sculptural aspects are clearly evident in the design. The flowing 'beam' that connects the front and rear fender forms and the graceful curves of the cockpit surround contrast with the more architechtural hood and trunk areas. The body side below the beam swells to accommodate the passengers and then returns on either end to provide entry or exit points for air. The lack of roof, or much else in the way of lighting, or driver protection from the elements, focuses your attention to the fact that this is a vehicle meant to be enjoyed and driven, and not much else matters. The overall mood though is of something more sinister.

Scott Anderson’s reinterpretation of an Auburn coupe was a bold and powerful statement of what this marque’s vehicles might have become had the company survived. Just as the original Auburn Boattail Speedster was inspired by contemporary boat designs by Chris Craft and others, so too does Scott’s design draw from contemporary nautical influences. In this case, some of the brutal form vocabulary, proportions and the “look” of offshore ocean racers is combined with some of the original car’s most prominent visual features, which has been unified by a sleek product design aesthetic. You see the ocean racer ‘s inspiration primarily in the slab sides, and tight radiuses that define the top “deck” of the car as well as in the sleek chop top windshield and cockpit area which is set far back on the body. The prominent “chin”, some of the front end detailing and the graceful curves of the grey center section of the car evoke memories of the original Speedster.

Hanwoo Yoo’s decision to use the Saturn brand as the focus of his project seems like a logical choice for this project, considering that companies extensive use of plastics for all it’s vehicles exterior body panels.

His project is a highly sculptural crossover type, with elements of both a pickup and a sporty coupe present. The front of Hanwoo’s design utilizes separates the fender and hood form remeniscent of cars from the 50s, along with a simple headlight and horizontal lower intake motiff. As on most Saturns, there is no grille. There is a hard crease line that begins at the back of the headlight, flows over the fender and extends down and back, and then disappears near the rear wheel opening which is mimicked in the roofline and lends a gracefulness to the overall theme. The rear fender has similar form language but the crease wraps much more tightly around the wheelwell. This, combined with the short pickup back, and wide B-pillar gives it a pronounced forward thrust. The rear utilizes a contrasting dark gray plastic bumper/tailgate wich works more like a trunk lid and gives superb access to the rear bed area. Another interesting aspect is the removable/retractable hatch cover that allows extended loads to be carried in the bed. A final Saturn feature is the use of small access doors although these have no windows, which is quite unlike anything on the market to date and helps give this vehicle a very sturdy feel.

Gary Ruiz combined elements and inspiration from both pre-1920 automobiles and modern off-road and rally cars into a futuristic multifuntion off-roader. The prewar proportions are evident in the vehicles large wheel, high ground clearance stance. You can also see it in the architectural greenhouse shape and the reinterpretation of the separate, motorcycle-style fenders and the exposed spare tire. The execution of the overall body forms and glass are very contemporary is is the overall product design feel obtained by the designs color scheme and use of mold-in-color plastics for high wear areas.

Steve McCabe's Audi GT is partly based on the original Audi Quattro of the 80s, a car that was for it's time a benchmark in styling, yet tough enough to be crowned a three-time WRC champion. The styling direction was also influenced by Ford coupes from the 30s. Besides dent and corrosion resistant plastic body panels, the vehicle uses polycarbonate panels to replace traditional glass windows. These are also carried below the vehicle in the rocker and floor boards, giving the vehicle a unique feel in the fact that you can see the road pass below your feet. Using comparitively light polycarbonate allows larger doors, opening gullwing style, and rocker and floor boards also swing open with the doors for easier entry/egress.

The College for Creative Studies in Detroit, Michigan is one of the top schools in the world for turning out automotive design talent. It has been in operation under various names since 1906 and offers eight major degree programs with a variety of concentrations possible.

The course benefits from close ties with manufacturers and their major suppliers. The faculty is drawn from both academe and industry to provide students with a balance of theory and practical application. Many of the Transportation Design teachers are practising automotive designers from the Detroit-based car makers. 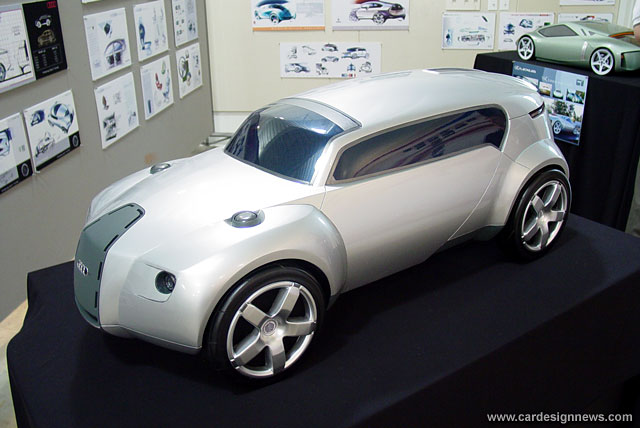 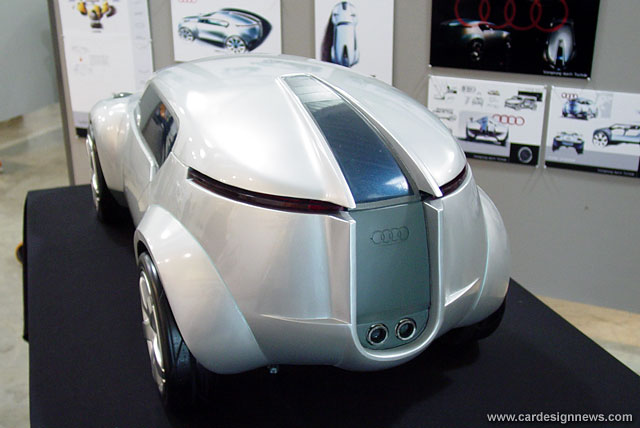 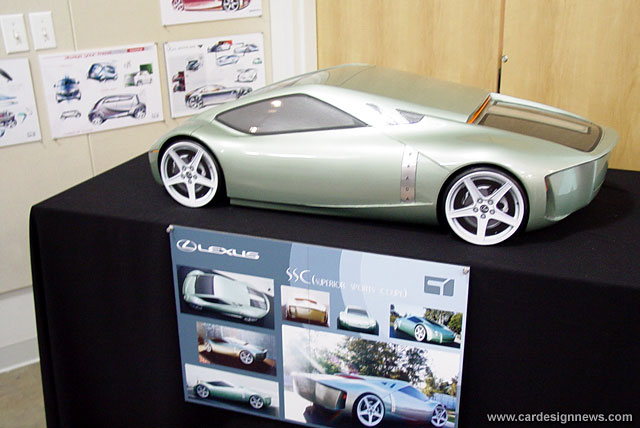 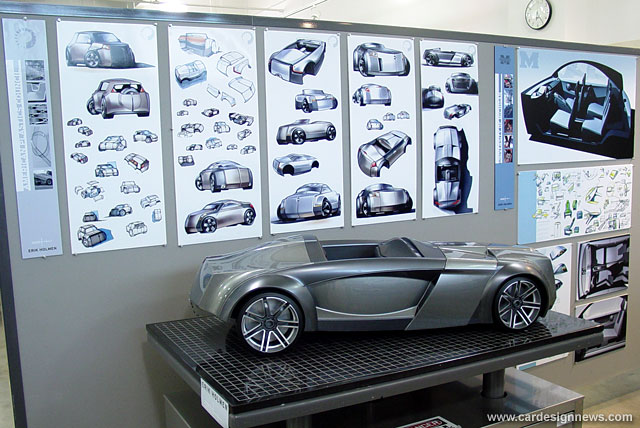 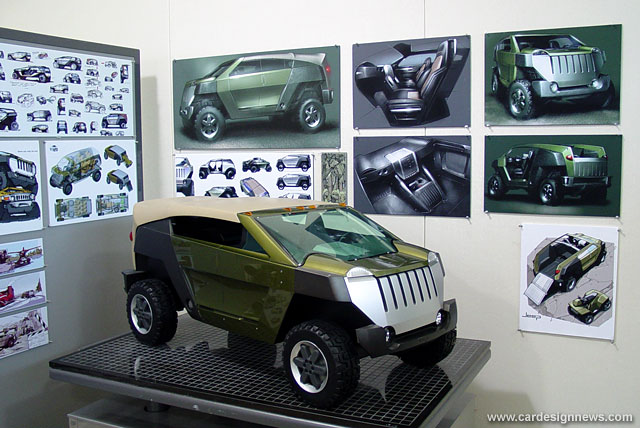 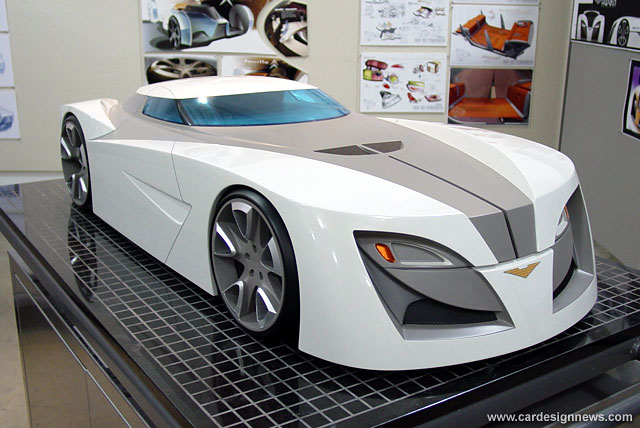 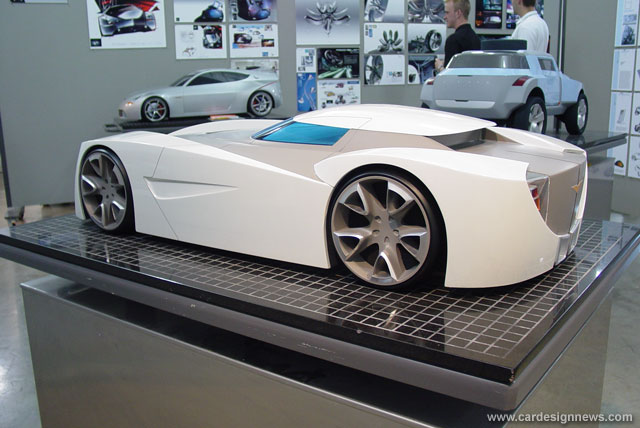 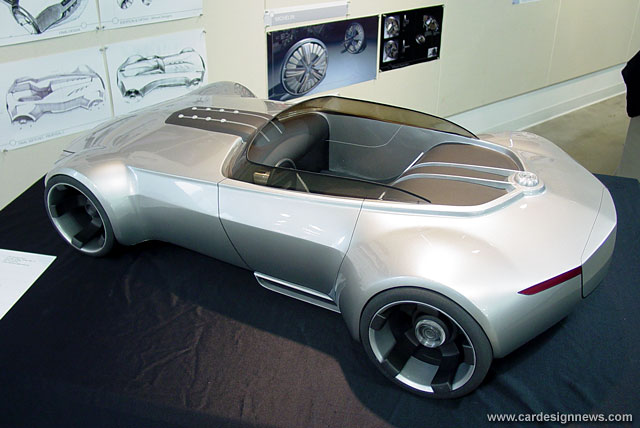 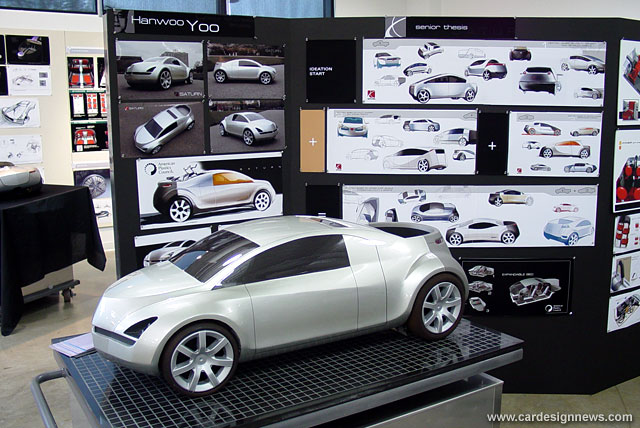 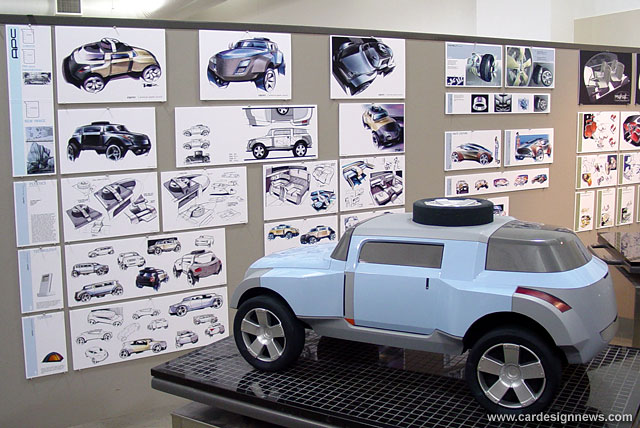 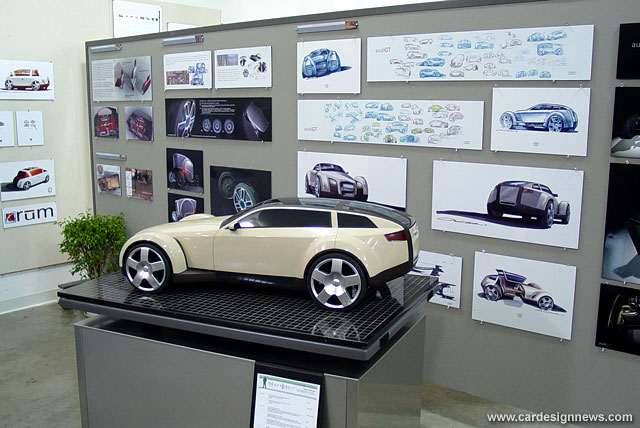 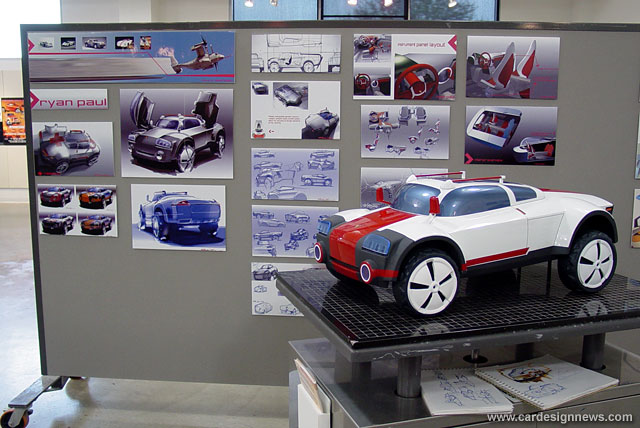 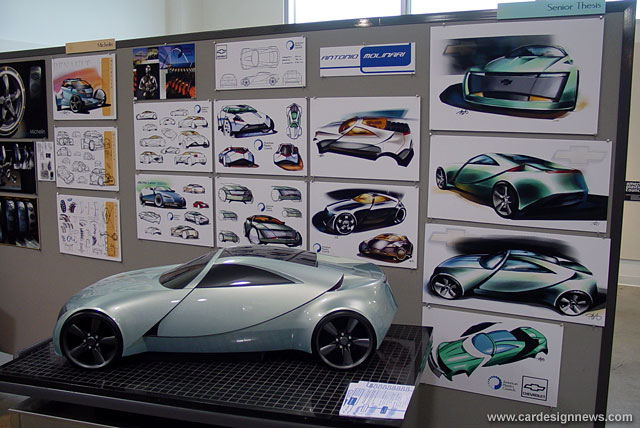 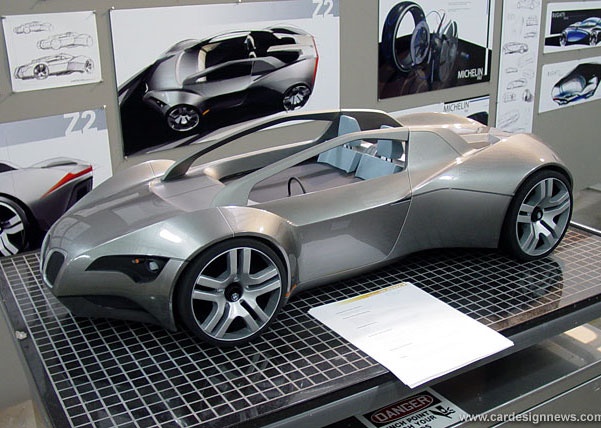 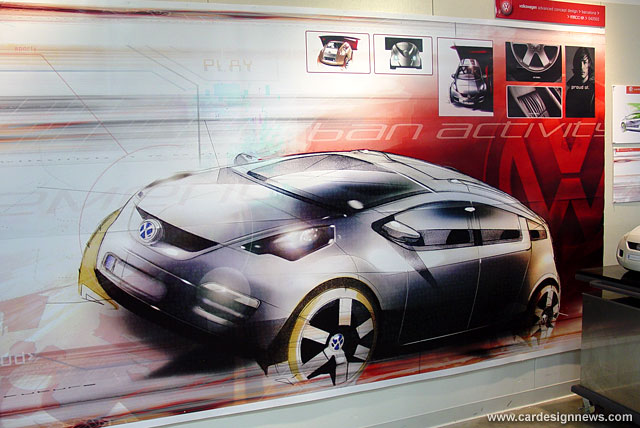 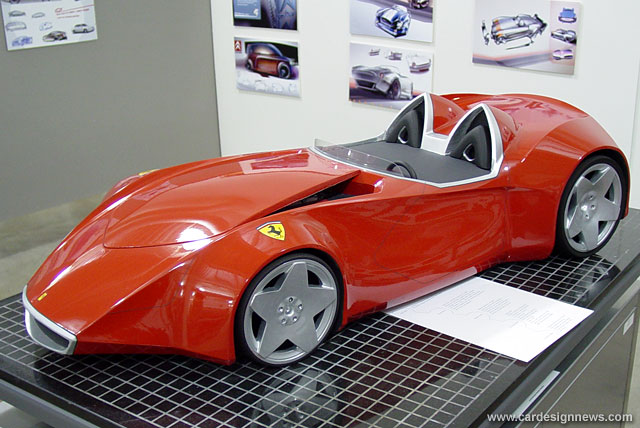