[Sponsored] From The Experts: Pacific Insight

Robert Miller, Pacific Insight: In 2016, there was an exponential advancement of applications with light inside the vehicle. We saw more car interiors having what I call ‘light-scaping’ in all areas. Ambient lighting is important these days, but we are also using this type of light to welcome and create exit scenarios that provide the customer a great user experience. We saw a lot of carmakers aligning with this concept to create their own branding opportunity inside the vehicle – at the click of a fob.

Lighting is getting more sophisticated on the outside as well. Even cars like the new Mini Clubman with its ‘Batman-light-in-reverse’ logo floor projection outside of the driver’s door. We’re not talking Rolls-Royce or Mercedes here. 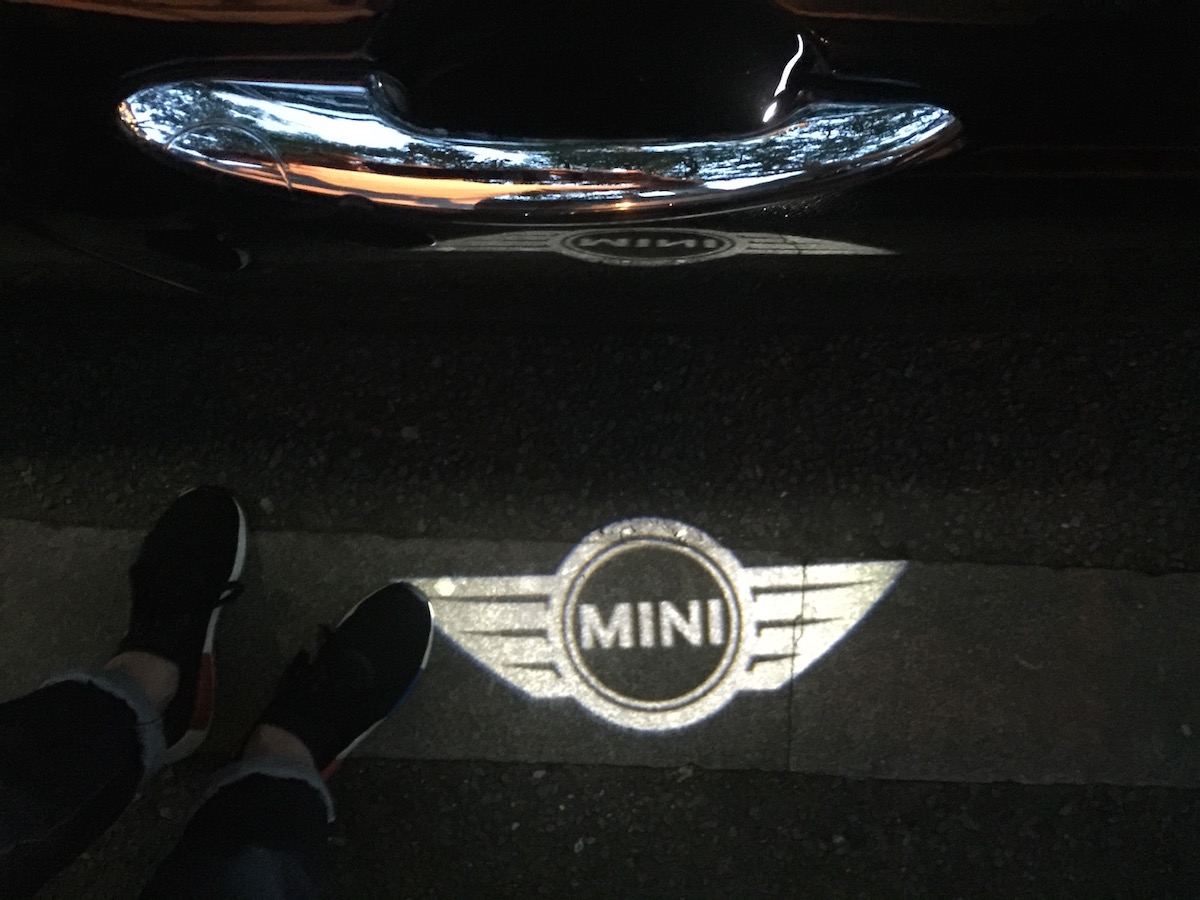 These new lighting features seem to be getting quite democratic?

Yes, lighting is becoming more specialised. Now, when a car is being styled, every carmaker is thinking about light design at the early stages instead of at the end, when they say: ‘Oh, and we have to add light’.

You’ve been in the lighting game a long time. When do you think this change of thinking happened?

I’ve been doing concept cars for almost 22 years, but about seven years ago I saw the pinnacle change. Now in production terms, you’re starting to see ambient lighting become an integral part of the design.

Any memorable concepts from your back catalogue?

The 2003 Dodge Tomahawk motorcycle and a lot of Ford products, like the 2005 SynUS concept [see below] plus the 2002 GM Autonomy. The Autonomy had the longest electro-luminescent panel ever made and used on a concept vehicle. 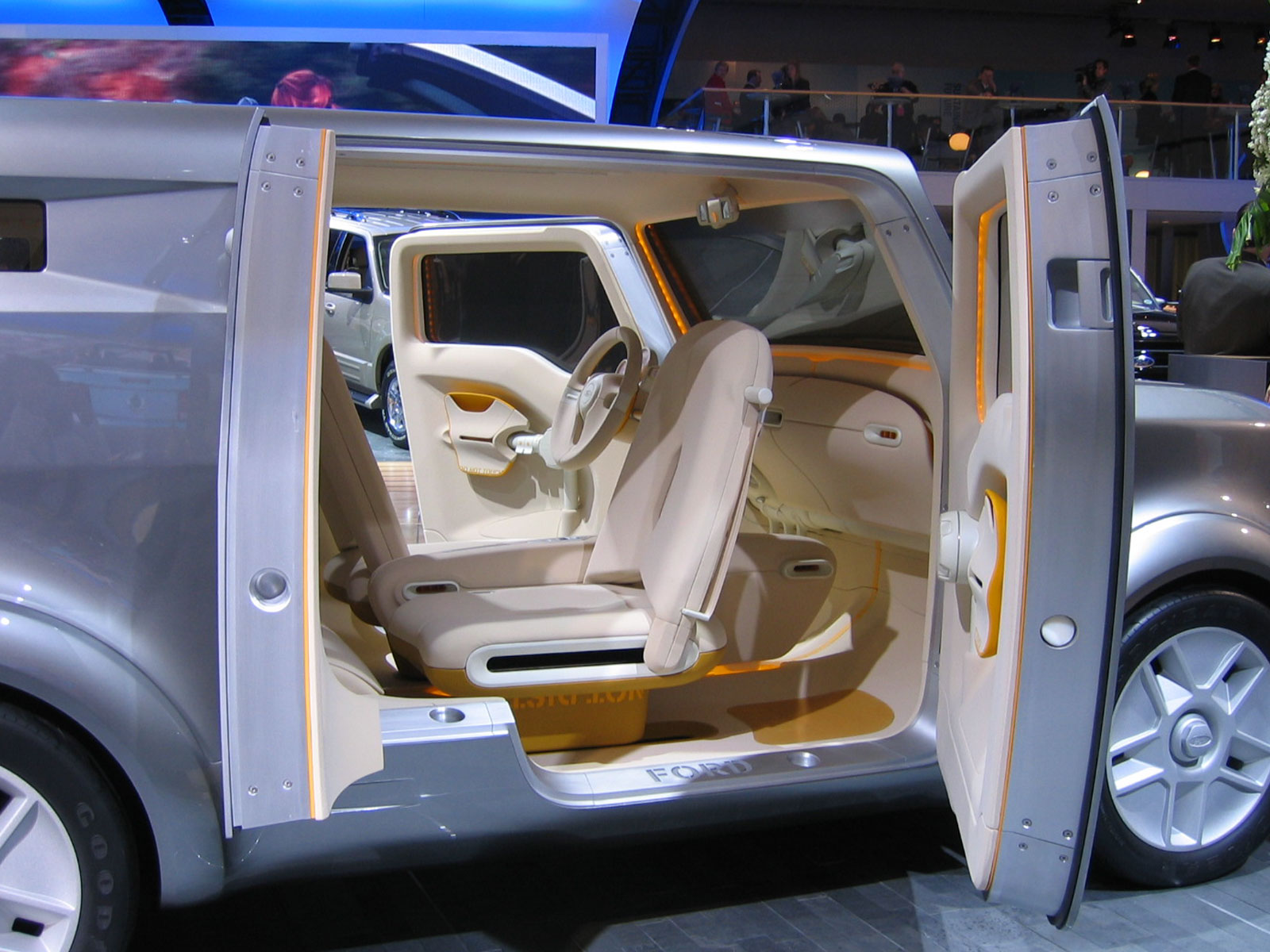 Last year was there anything specific, either concept or production, that you thought, ‘wow, that was a fresh application’?

I think what you’re saying is that before when we used to see lighting in concepts, the concept and the [production] reality were very far apart. More recently, this gap has shortened dramatically and you’re starting to see realities presented at a concept stage, and then an evolvement of that reality into a real production car. Ambient lighting is in all kinds of products now and consumers are incredibly savvy. Within the interior of a car, the way ambient lighting is illuminated makes a difference and determines if people desire it as a feature in their car. If done right, the absence of ambient lighting will be missed when people buy new cars.

Do you think there’s a danger in this race to surprise and delight, carmakers can risk overlooking more functional aspects of lighting?

Yes, exactly. One of the things a good vehicle design should have is attention to detail. This is important in the overall light-scaping of the vehicle inside because if you can’t find the car’s USB port – because it’s not lit – this function becomes the centre of your world. When you design a car, you need to think about how it’s going to be used. How is it going to be lived in and how will that affect what content you as a designer need to put into it? Lighting areas that have never been done before is really a trend that’s starting to happen. 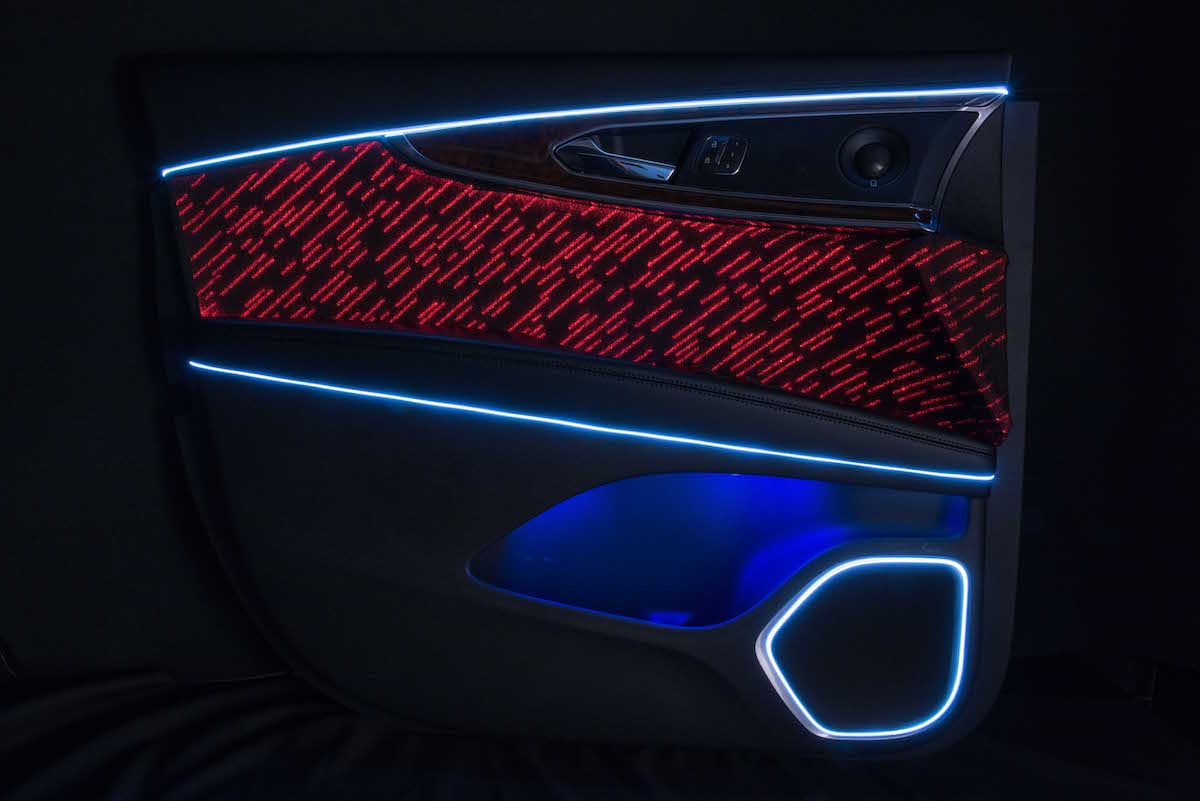 You help carmakers make good decisions with your knowhow, but it seems they are increasingly setting up their own lighting design departments as well, certainly for headlamps but also for interiors too?

They are, because technology has advanced so much now that lighting design is integral to their marketing and branding. Carmakers are dictating what we need to do to satisfy their marketing positioning. The key is to provide fresh lighting innovation that is cost-effective.

In terms of technologies, which ones are you most excited about and when do you think each one will break through? OLEDs have been  talked about for a long time. Are they still relevant?

OLEDs [organic light-emitting diodes] have been around for a long
time, but with little success of wide-scale adoption in car designs.
There are technical issues that are now being solved, but the cost of these devices are limiting them to very special designs found on premium brands. OLEDs are interesting devices that, when combined together, create their own unique design look compared to what is being done now. Basically, if you want to create an OLED tail light you create an OLED specific look that involves using individual ‘chip-lets’ to create a pattern of light. In their own way they are beautiful and will certainly find a more common home as the technology matures.

It is. The fact that carmakers are searching for uniqueness and to differentiate themselves from other designs enables this technology to grow and become adopted. For example, Audi and BMW have pushed the design limits and created some stunning OLED designs with their tail lamps. The niche has been created! 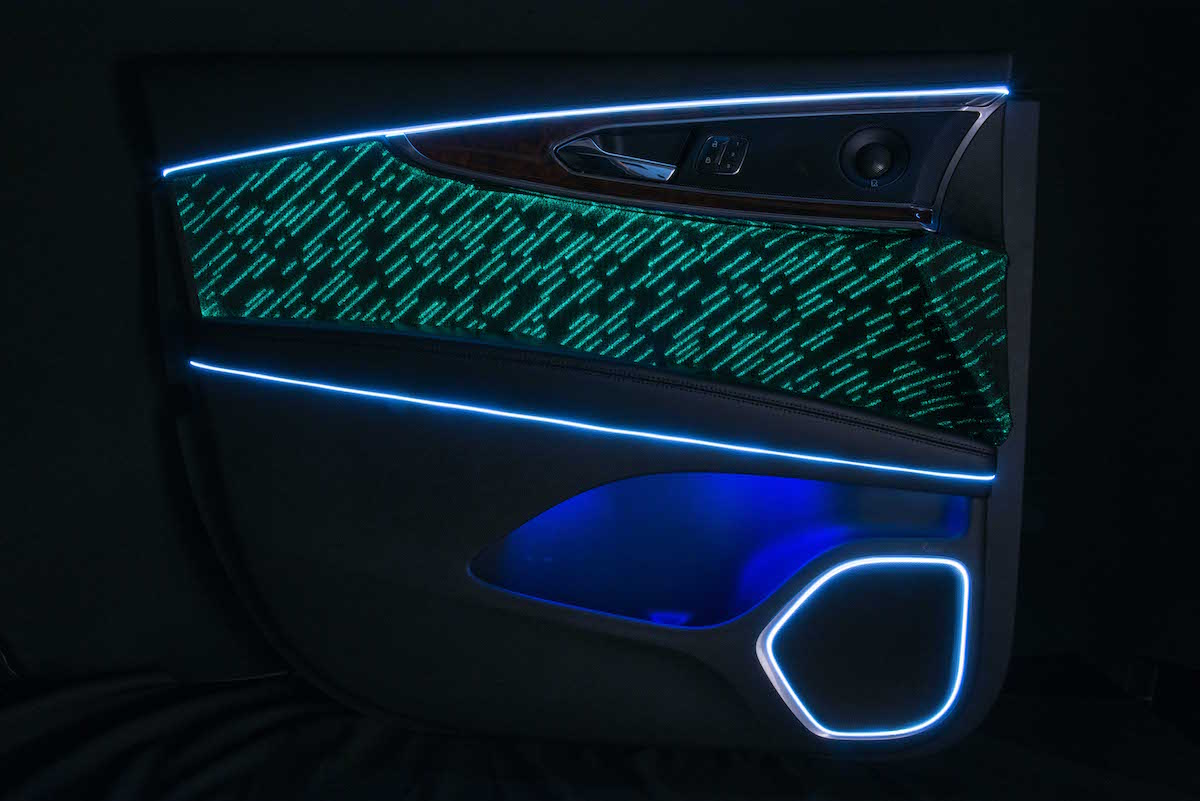 What else is new in lighting?

We’re seeing an advancement of new materials and better light guides. Wave guides, which are flat surfaces that may have light injection in the sides, extend along lines to create different shapes. Pacific Insight is strongly involved in red, green and blue (RGB) lighting, with the ability to do ‘colour on demand’ in thousands of shades to change the car’s interior environment.

Design should be considered in three attributes: First, when you design a car, you have to have ambient lighting, but second, you should be able to use that ambient lighting in a functional way, such as the illuminated USB port mentioned earlier.

The third aspect is safety.  For example, let’s use the steering wheel. You might have a logo on it, but if you add light to the logo, it’s subtle and welcoming for the user. However what might be even more interesting is to have the logo flash to indicate if something is wrong in the car, such as a loss of traction, an open door, or a seatbelt undone. Pacific Insight always considers ambient, functional and safety lighting when it presents these new technologies and the company aims to have one product that can do these three things, to make it adaptable.

Technologies like LED were once were quite exciting but are now commonplace.  How have they advanced?  Has the lack of colour intensity found in some early LEDs been solved now?

I think the majority of those problems are now solved. We are
seeing great colour uniformity with LEDs. The packaging is getting
smaller and the lumens brighter. Because of these advances Pacific Insight has recently designed an illuminated sunroof that uses tiny LEDs that are laminated between glass or polycarbonate.  We’ve managed to manufacture our substrate and then laminate that into the first polycarbonate sunroof, in collaboration with Covestro. Polycarbonate is starting to make its way as a material of choice for cars of the future with some European cars using it for lighter-weight sunroofs, and even some side window panels. The finished sunroof panel is light and strong and has all the benefits of polycarbonate. Pacific Insight’s work with Covestro has enabled new ideas with exterior and interior applications for automotive. 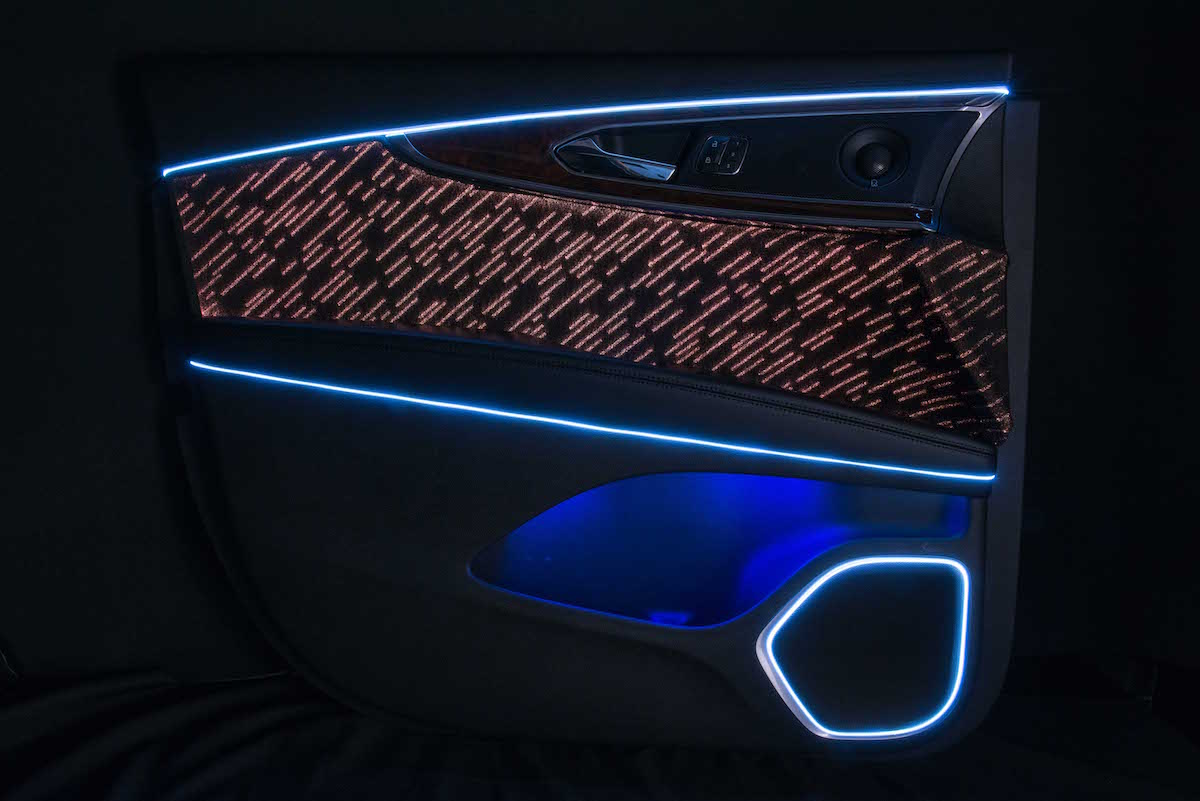 But glass is still a good value product though, despite its weight?

Yes, but the real magic here is we’re able to place light in either
polycarbonate or glass. We see both as essential elements for illumination but realise the use of polycarbonate is increasing and offers other unique applications and designs commonly found on vehicles today. It’s sort of a new lighting canvas that can have lights embedded in it. I can let my imagination go wild with the possibilities. If you look up at Pacific Insight’s illuminated sunroof, you’ll see a real constellation. We took constellation patterns like the Big Dipper [or ‘The Plough’] and put them in there. It’s a beautiful piece. 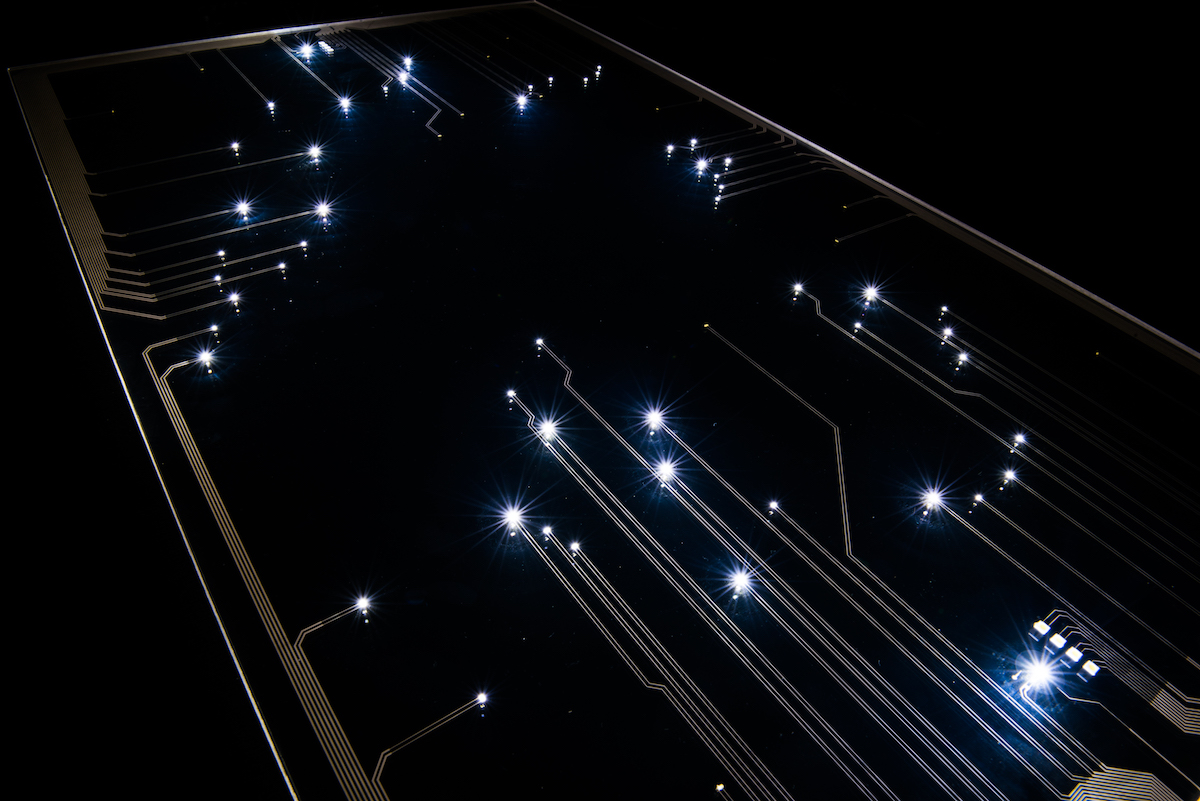 They flicker because each LED is ‘individually addressed’ so we can have dynamic lighting. That’s the magic. We understand the methodology of bringing it all together. Instead of just having these lights that go on and fade we can involve twinkling – one can twinkle and go out, and then another LED can turn on.

What do you predict will be the exciting affordable lighting of 2025?

Lighting interiors that we like today will evolve. I can’t predict the future, but I know that lighting will become much more sophisticated. Previously unlit areas of the interior will become lit. We’ve done designs in the very back of the seat using a light guide with two LEDs to give a surprise and delight opportunity. When a customer sits inside, the light can project onto their lap to create a perfect opportunity to read a book or magazine. That’s where we feel light is going. The other area is holographic-type imaging. We have demonstrated some great cup holders that have a holographic material inside, moulded right in. When you add light to it, it shimmers and shines with different patterns. Lighting will become more visually complex but it will also become more beautiful as LEDs and materials mature. 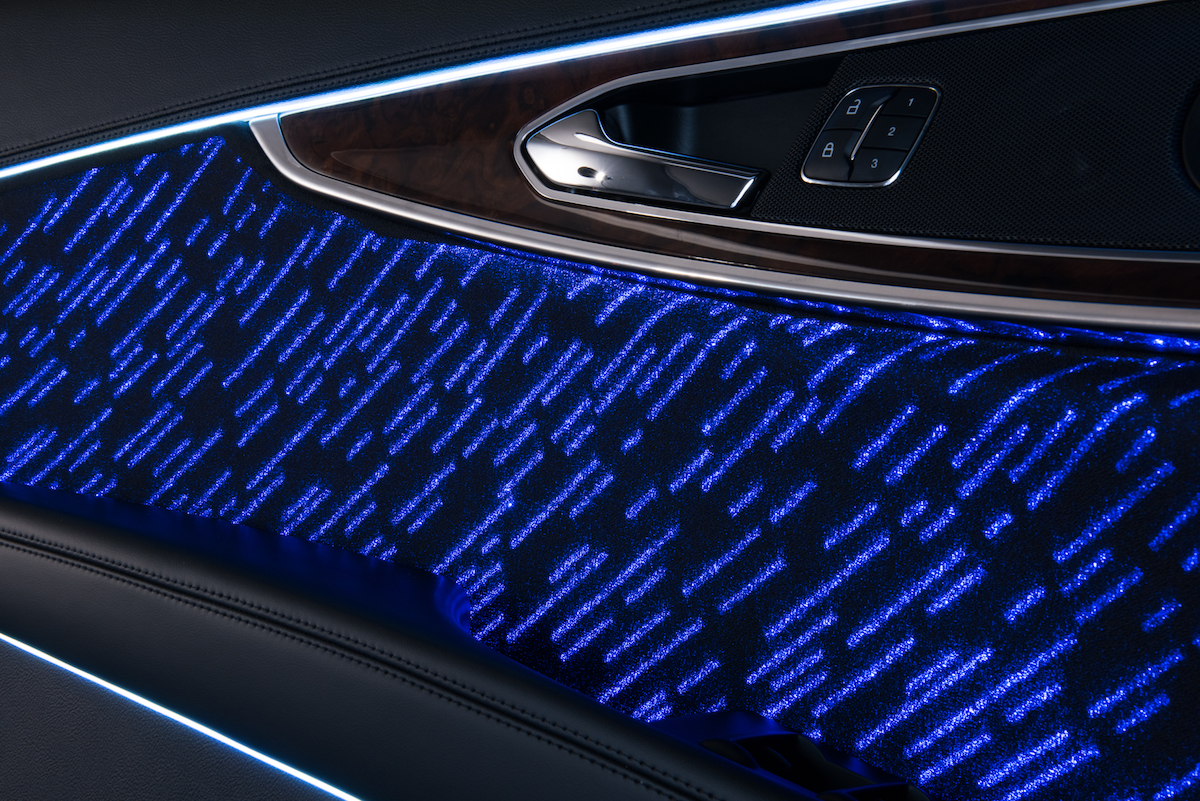 Will LEDs still be the driving force in ten years’ time? Or OLEDs or something else again?

LEDs will be the driving force for the next five years unequivocally. OLEDs may play a part but in specific design areas that require a flat surface area light.

So OLEDs won’t be used on a bigger scale like on some older concepts?

Most likely the LED will be the base of all future lighting designs. But new materials are being developed that can drastically alter and enhance LED performance. I believe OLEDs will find their spot as well. Innovation will lead to other ideas and technologies that aren’t on our radar yet. It’s an exciting time.

As we head towards autonomous vehicles are there more options for interesting lighting, as potentially there won’t be as many distraction issues – because the customer won’t necessarily be driving any more?

Autonomous driving is definitely going to be an enabler for ambient interior lighting. It’s hard for my generation to imagine what it will be like in a car without control. It’s more like being on a train. I’ve ridden in autonomous vehicles and understand but it’s the young who will benefit from and experience that. It doesn’t have to be dark any more. The future looks brighter.