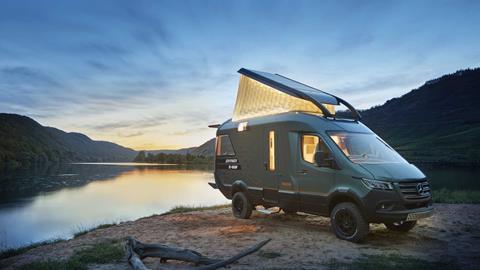 While all the automotive show excitement was at the IAA in Frankfurt this week, another important vehicle show was just drawing to a close some two-and-a half hours to the northwest, in Düsseldorf. The Caravan Salon is Europe’s largest RV show, drawing 250,000 visitors in a sprawling 200,000+ square metres of exhibition space. 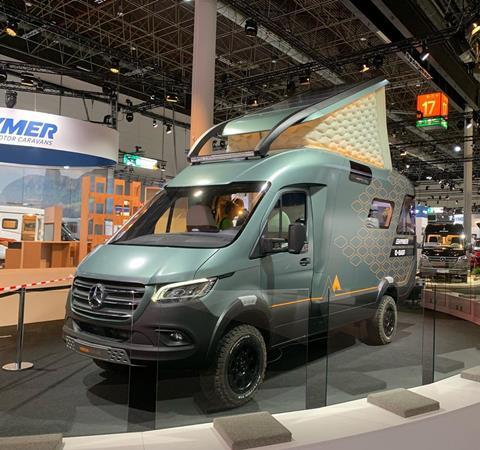 The VisionVenture at the Düsseldorf Caravan Salon last week

Most of the vehicles on display are your garden-variety holiday fare, but a few stand out at every show, and this year one concept in particular seemed every bit as exciting as the offerings down in Frankfurt. It was the Hymer VisionVenture, an RV for new generation who demand something different from their grandfather’s hopelessly outdated recreational vehicle. 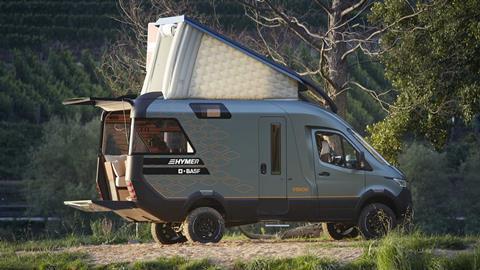 The VisionVenture was built to get out into nature

Let’s face it: When we take our annual vacations, we see the RVs or caravans on the road, and they give even the most settled of us a bit of Wanderlust. Wouldn’t it be great, we think, to ditch our house or apartment and go on the road, free to wander at will?

But we are designers, and most of the “design” we see in the RV world is conservative, if not downright retrograde. This is particularly true in the United States, as the four largest RV manufacturers are clustered around Elkhart, Indiana; a small, homey Midwestern town southwest of Detroit that also boasts of being the “musical instrument capital of the world”.

Make of that what you will.

There, in bucolic Elkhart, RVs from different brands are built with much of the same engineering and design in mind, as they are all chasing the same customer demographic: older Baby Boomers and the last of the Greatest Generation customers. The engineering is clever, with all sorts of retractable awnings, slide-out lounges and myriad clever cubby holes for all that stuff you want to get away from, but somehow feel compelled to bring along. But the design – rolling mega-boxes with the same ‘supergraphics’ on the side, and an interior aesthetic that would charitably be called “Grandma’s Parlour” – makes for a rather muted celebration of the touring freedom RVs provide. 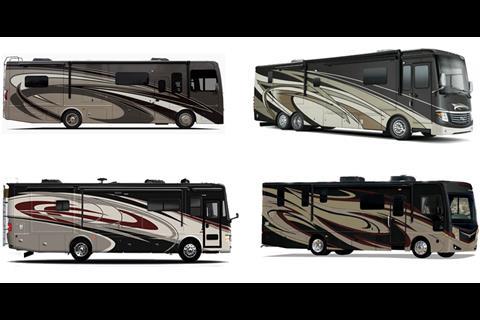 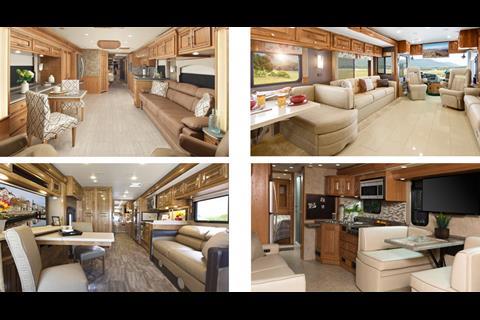 Four Class-A RVs, inside and out. Can you tell who made what? Do you care?

Indeed, Airstream’s CEO once quipped, “the Europeans are about fifteen years ahead of us in design”. This from Airstream, which makes the most iconic RVs in America.

The Europeans will now pull even further ahead with the VisionVenture concept. Designed to sit on a Mercedes Sprinter van chassis, Hymer modified the cab, adjusting the A-pillars and rake of the windscreen, along with shortening the bonnet to make the vehicle seem more monoform, even with the bespoke camper box which is larger than the standard Sprinter. 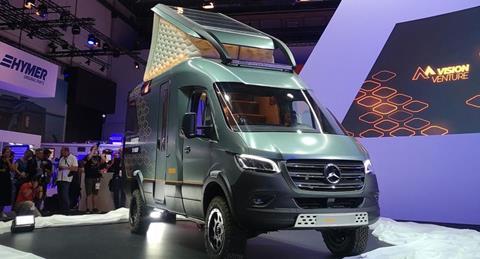 The Sprinter chassis was modified to accept four-wheel drive, as well as the all-terrain tyres mounted to bead-lock style wheels, plus sharply raked approach and departure angles on the body, complete with skid plates. This means you could actually park the VisionVenture off-road, instead of manoeuvring a traditional massive camper into a suburban-like RV park. 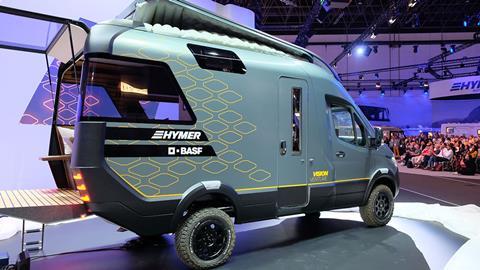 Up at the top, an LED lightbar extends over the roof of the cab, while a solar panel over the roof gives extra power to the vehicle beyond the on-board batteries.

The top pops up to create a sleeping loft. Baffles on the sides of the top inflate to create an air cushion that acts as insulation to maintain warmth on chilly nights. Projecting from the roof behind this bedroom is a little pop-out balcony, perfect for those sylvan re-enactments of the Romeo and Juliet balcony scene – and yes, there is a ladder for Romeo’s romantic ascent. 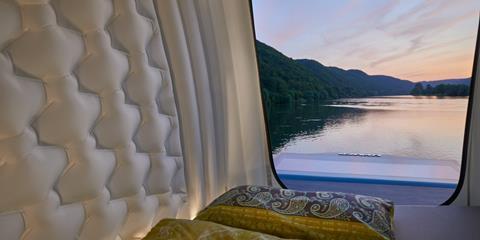 Plenty of view from the sleeping loft

Stepping into the interior, a pair of captain’s chairs are placed in the cab for comfort on those long trips along the motorway. Swivel the passenger chair around and unfold the desk and lamp to make a convenient office. 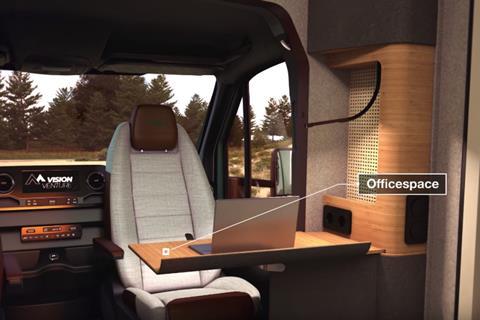 Stepping further back, one finds a lounge with two settees, with storage and a dining table stored underneath. Unlatch the back wall and fold down for a convenient deck that opens the VisionVenture to the view. In front of the lounge are the cooktop and the sink that sit flush into the countertop. A refrigerator sits below this to complete the tiny kitchen. In front of this and immediately behind the driver is the staircase that leads up to the sleeping platform created by the pop-up roof. 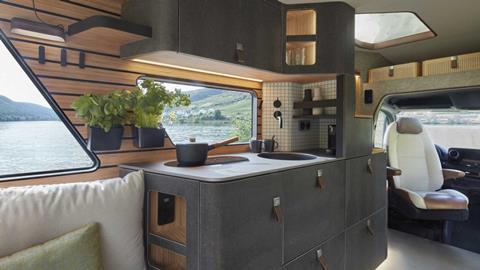 The kitchen and storage cubbies. Refrigerator is one of the drawers

The bath is especially ingenious. Entering it in its “closed” mode, it looks like a standard lavatory – a sink, a toilet and a bit of storage. But a couple of strategic pulls and the sink folds over the toilet, the room expands, and a shower is created (see video below). Lining the shower is Veneo Slate® an ultra-thin stone veneer product that can be bent into curves. Another BASF product, it is one of a number of innovative surface solutions crafted especially for the Vision Venture. 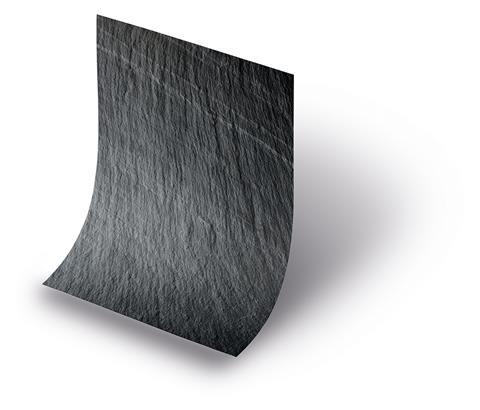 The VisionVenture’s numerous clever design features drew inspiration from the Tiny Homes movement, the yachting world, and input from the custom camper world.

“Innovation has always been part of Hymer’s DNA, and the concept VisionVenture is our take on modern van life,” Christian Bauer, CEO of Hymer, commented. “A major source of inspiration for this project was the camper community, who has given us new impetus with their creative ideas and DIY conversions.” 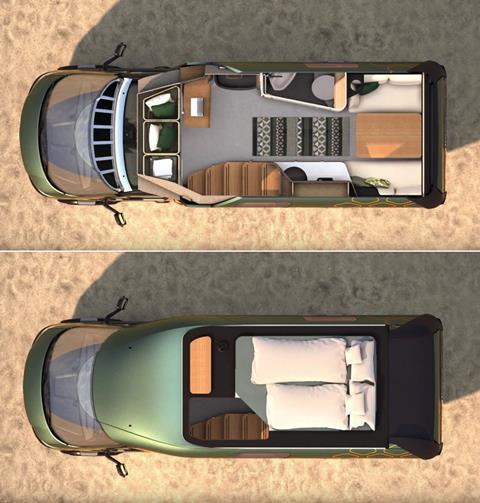 The VisionVenture, sadly, is just a concept. Hymer has no plans for production, although it is certain some of its features will make it into production vehicles over the next decade. Given its reception by the crowd and the media at Düsseldorf, Hymer could probably sell every one it could make.

Take an extensive tour of the Vision Venture here in this video made at the Salon (19 minutes):