MG takes a step forwards with the MG ZS, giving premium features in a non-premium car

It’s fair to say that the MG brand has been through a few phases in the last decade or so. Its rise from the ashes of MG-Rover in the mid-2000s involved picking up where they left off at Longbridge, then shedding the old models in favour of Chinese-built cars – which themselves were initially adapted from parent company SAIC’s spiritually-related Roewe brand.

Now we have original, unique MG Motor models, albeit still made in China. The MG 3 supermini boosted the company’s UK sales from the hundreds into the thousands when it arrived in 2013, while the GS mid-sized SUV has helped get them above 4000 sales in 2016. Of equal importance to MG Motor is that these two cars have also successfully reduced the mean average customer age from over-65, to 45 years old. 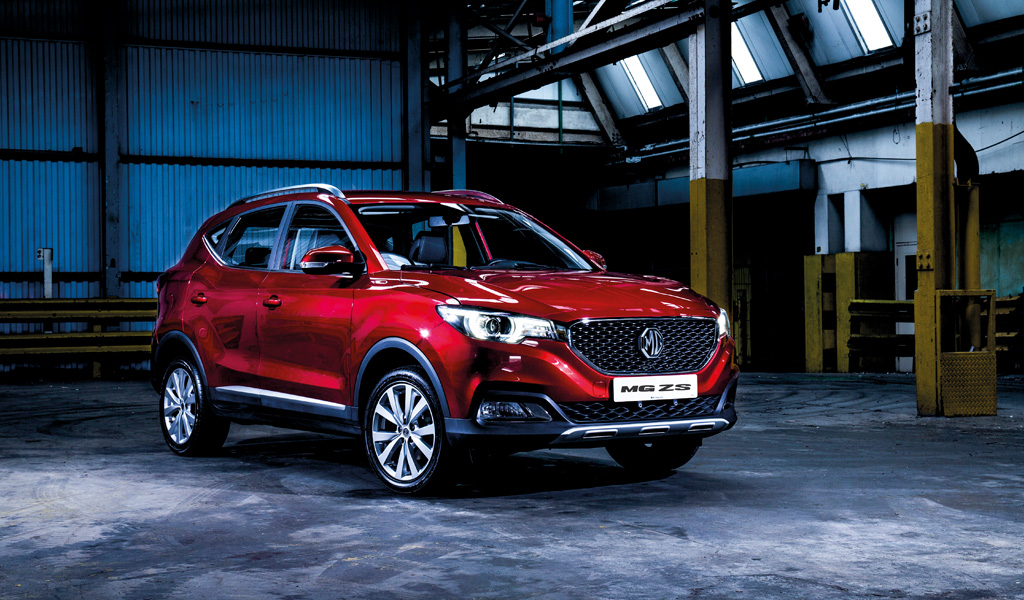 Now that the Octavia-sized MG 6 has been quietly withdrawn from the UK, the smaller ZS is the third model in their current range and, given its claimed potential to double MG’s sales, represents an important next step. As an upshot of this, the ZS features an evolved design language referred to as ‘Emotional Dynamism’. There is thus a new face, to be used on all future models in the next few years, comprising a large trapezoidal mesh grille whose frame reaches into the swept-back, rectilinear headlights (as is fashionable these days). 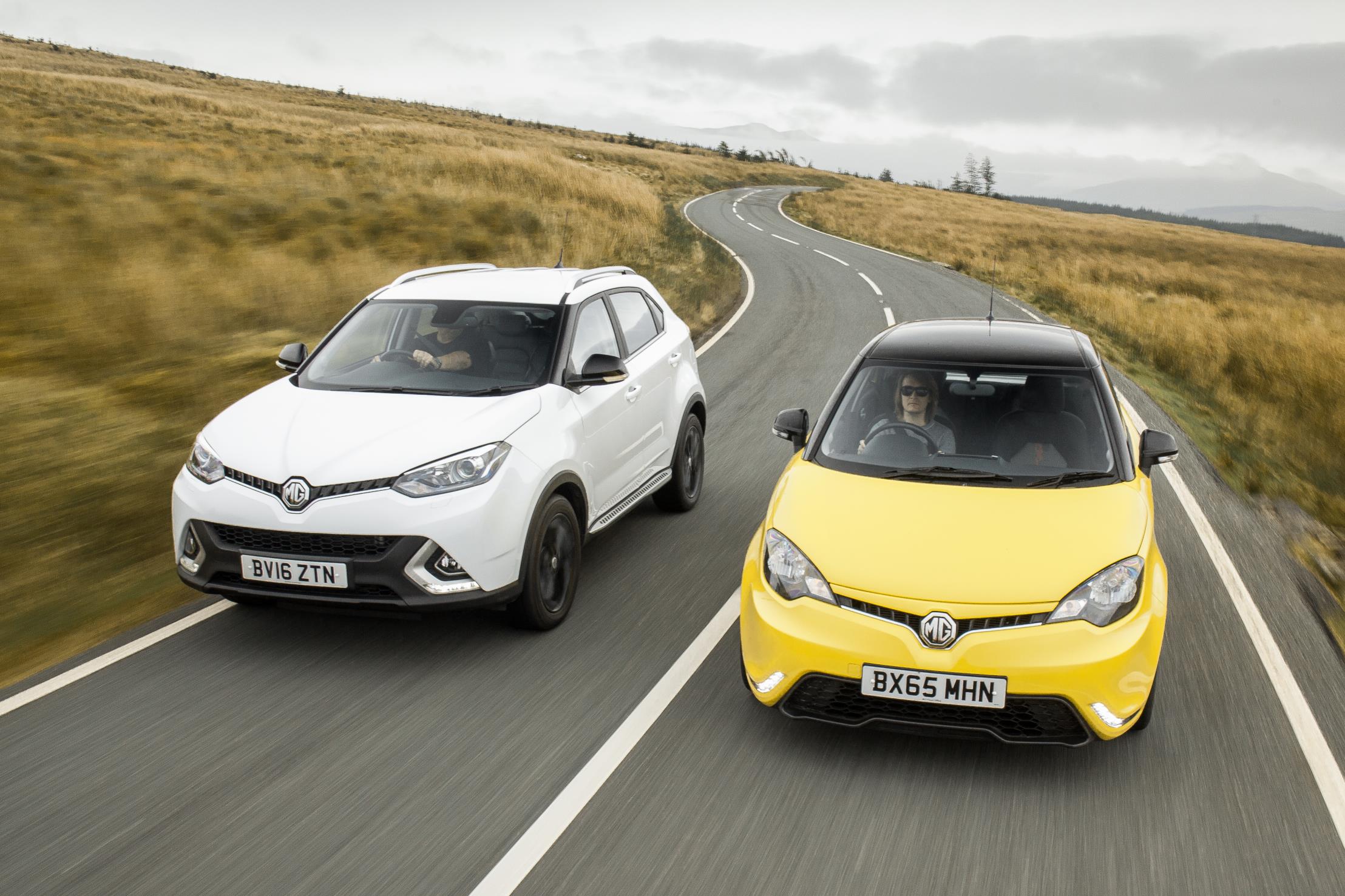 In a way, this is a bit of a shame; the previous face, which featured a dominant centre badge and only skinny grilles joining it to the headlights, was arguably more distinctive in a world where nearly every car now has a vast main grille.

It’s also a little concerning that the way the leading edge of the bonnet’s surface sits on top of the chrome grille frame is strikingly reminiscent of the same area on the Mazda CX-3. The DRL signature which hugs the main projector headlight and sweeps along the upper edge also warrants a Mazda 6 comparison… 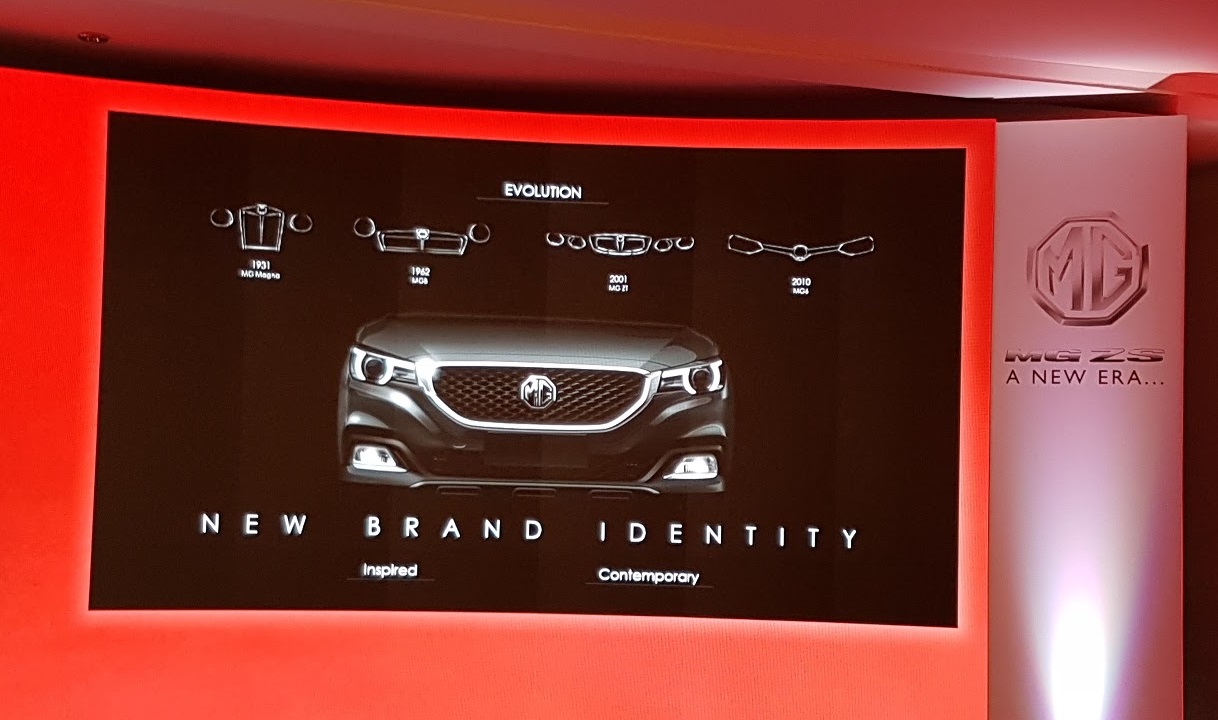 …however, MG are clear that the inspiration came from their own history, and sure enough that grille outline does also resemble a much-enlarged version of what featured in the 2000s. Perhaps a vertical dividing bar would’ve made the historical connection more obvious. 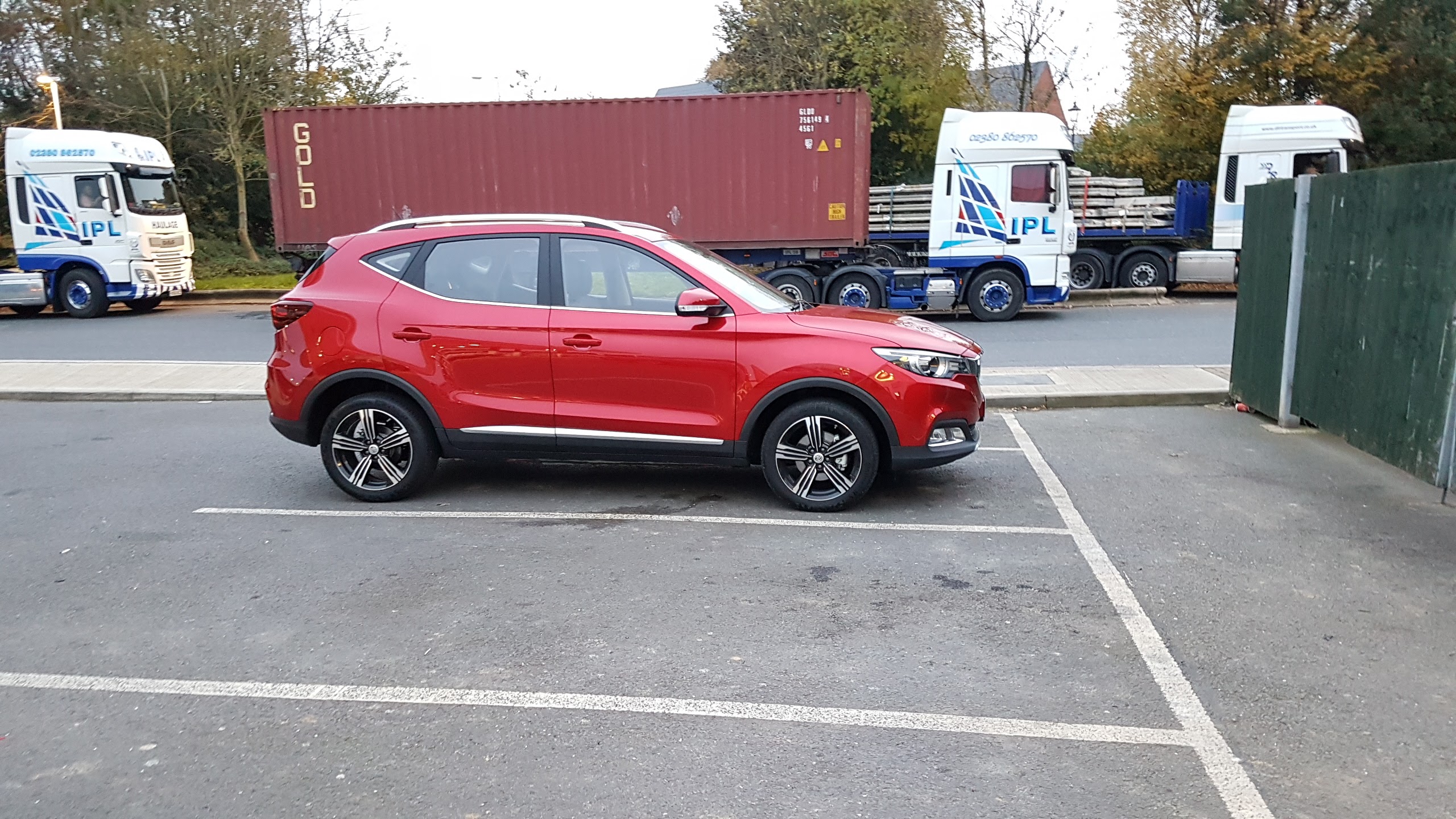 As for the rest of the exterior, the side surfacing is chiefly characterised by what head of design Carl Gotham called a “leaping shoulder line,” which is really two lines – one from the headlight to the rear door handle, and a higher one reaching forwards from the tail light over the rear wheelarch, which blends into a subtle shoulder kick. Perhaps as pen strokes on a piece of paper, these would together echo the lines of an old MGA roadster or ‘50s Bentley to some degree, but in the metal, on crossover proportions, it’s nothing groundbreaking. 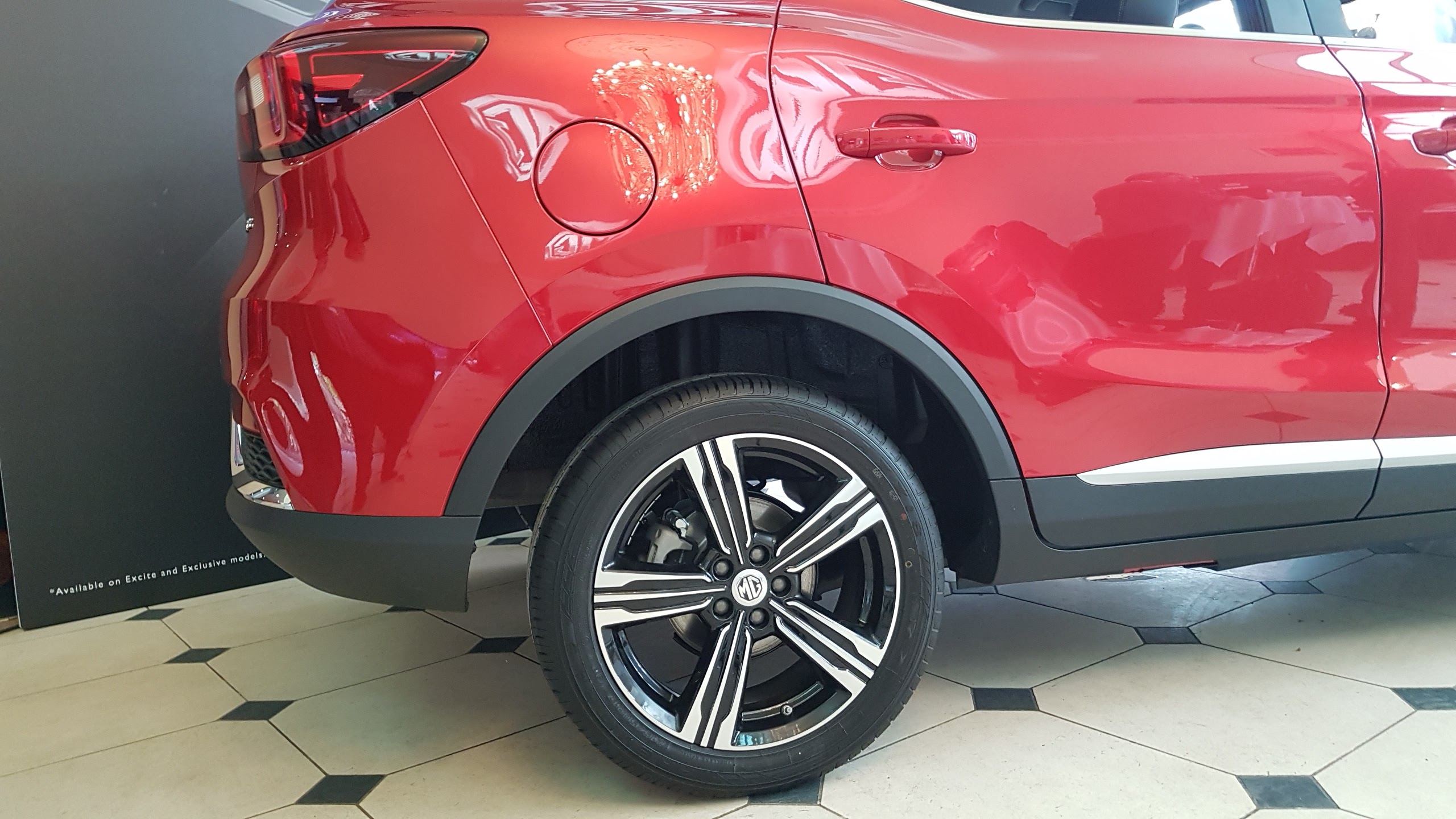 Meanwhile, even the top-spec model’s 17-inch wheels look lost below all the body volume, particularly at the rear. Higher-profile tyres or an 18-inch wheel option would help improve the stance of the car straight away.

With all due respect to the efforts made by MG to add “design quality” and move forwards from where they’ve recently been, it’s perhaps a good thing that the badges at each end are so large (the rear one opens the tailgate, by the way). There’s nothing distasteful about the ZS exterior, but overall it’s a little safe and merely reflects what’s already trendy in this sector. 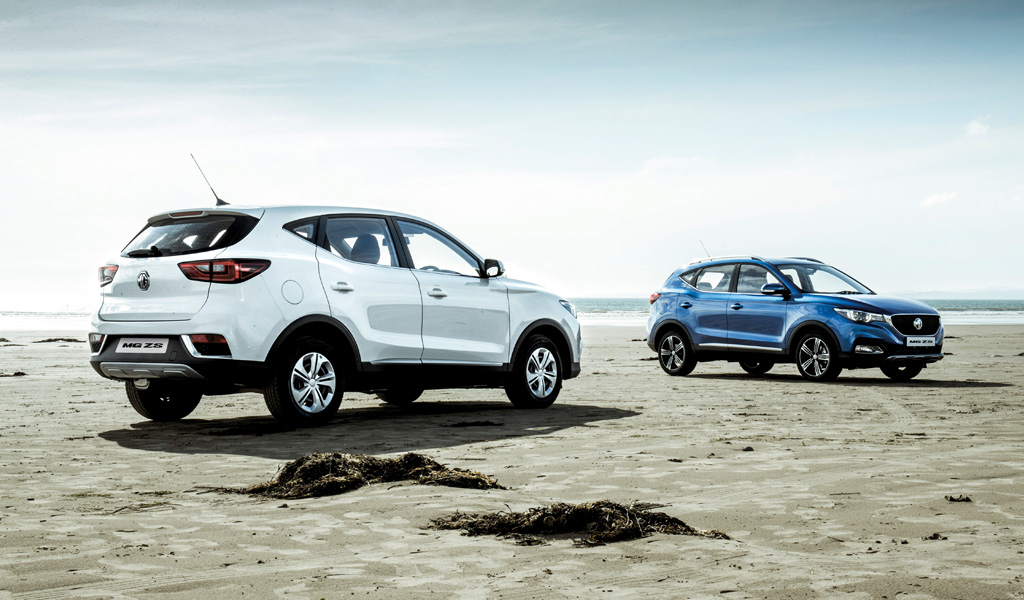 In fact, it’s such a trend magnet that head of sales Matthew Cheyne managed to fit the buzzwords ‘fun’, ‘sporty’, ‘versatile’, ‘lifestyle’, ‘millennial’ and ‘bang for your buck’ into a single sentence when describing the car’s targets. In fairness, it makes a lot of sense for a small-but-growing company to devise (in theory) a guaranteed seller. Nevertheless, we hope the next MG pushes the new style further and displays more confidence. 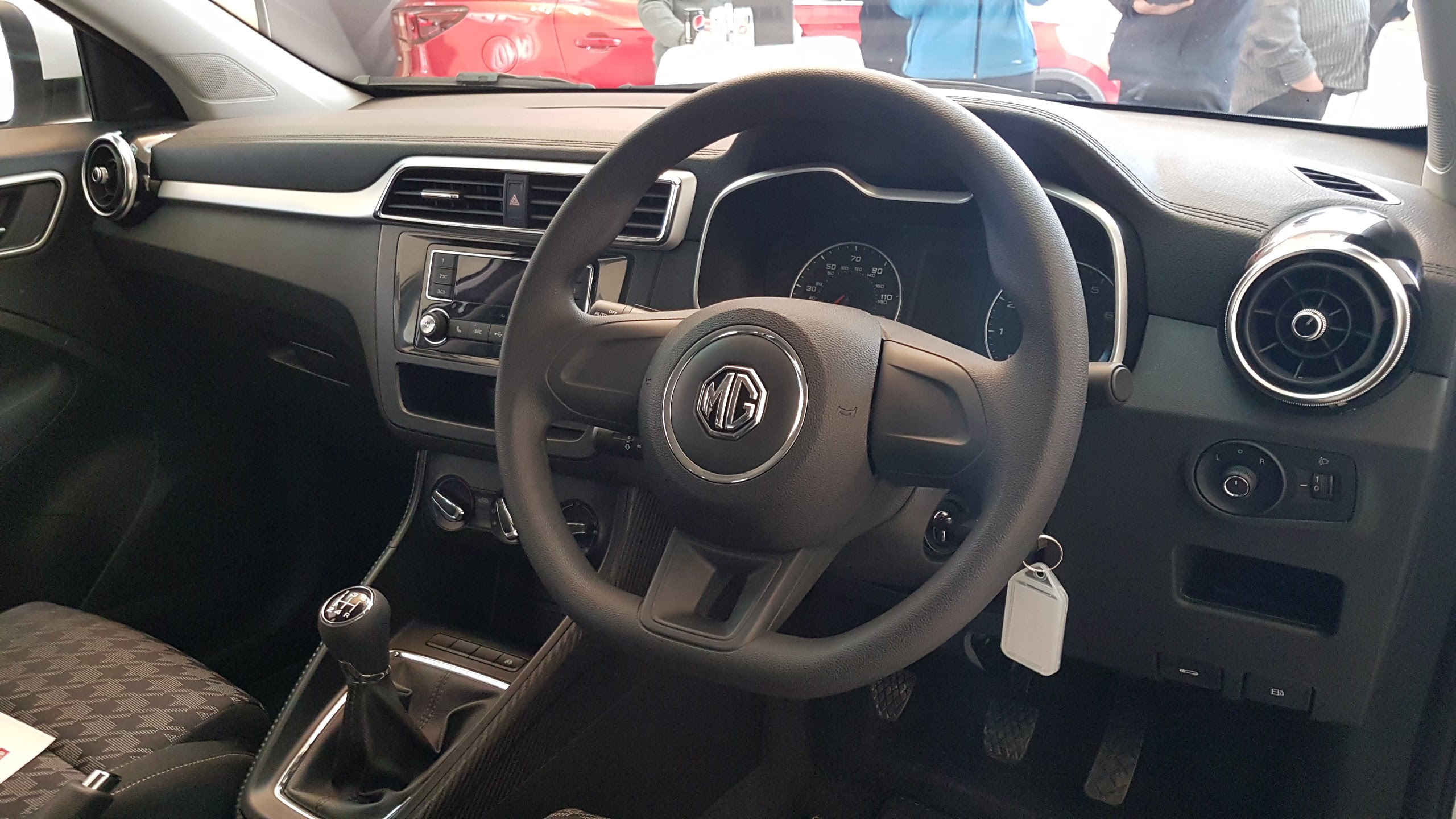 Base model loses the touchscreen, gains a little cubby hole

The interior is of greater significance. MG have put some real effort into raising the quality of its interior, boasting of their more sculptural, slush-moulded dashboard the likes of which is not found in other cars of this price range, as well as the eight-inch infotainment touchscreen that’s standard on two of the three trim levels. Aesthetically it’s again largely predictable, but mature and clear.

While there is class-leading head and leg room to be enjoyed, the glovebox isn’t big enough to fit an A4 folder. If you find there’s nowhere to put the paper User Manual either, rest assured that the touchscreen system contains an electronic one. 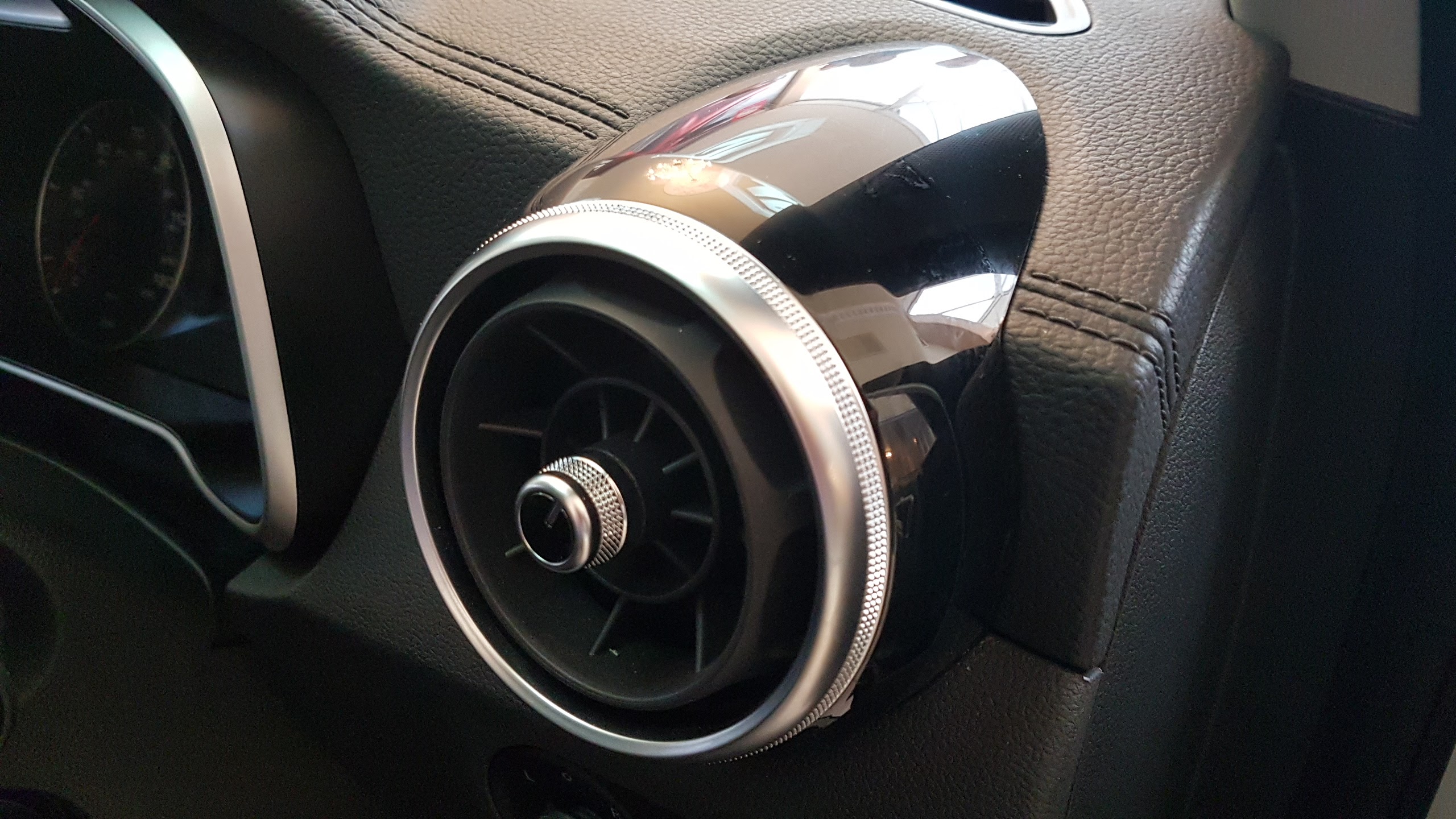 There are some more thoughtful details, such as ticket slots near the cupholders to avoid littering, while the soft-touch plastics are generally acceptable for a car at this level (less-than-solid knobs aside) and the “turbine vents” are a pleasing design touch – although the inclusions of carbonfibre-effect vinyl on the centre console and stitching on the plastic dash top are somewhat dubious… 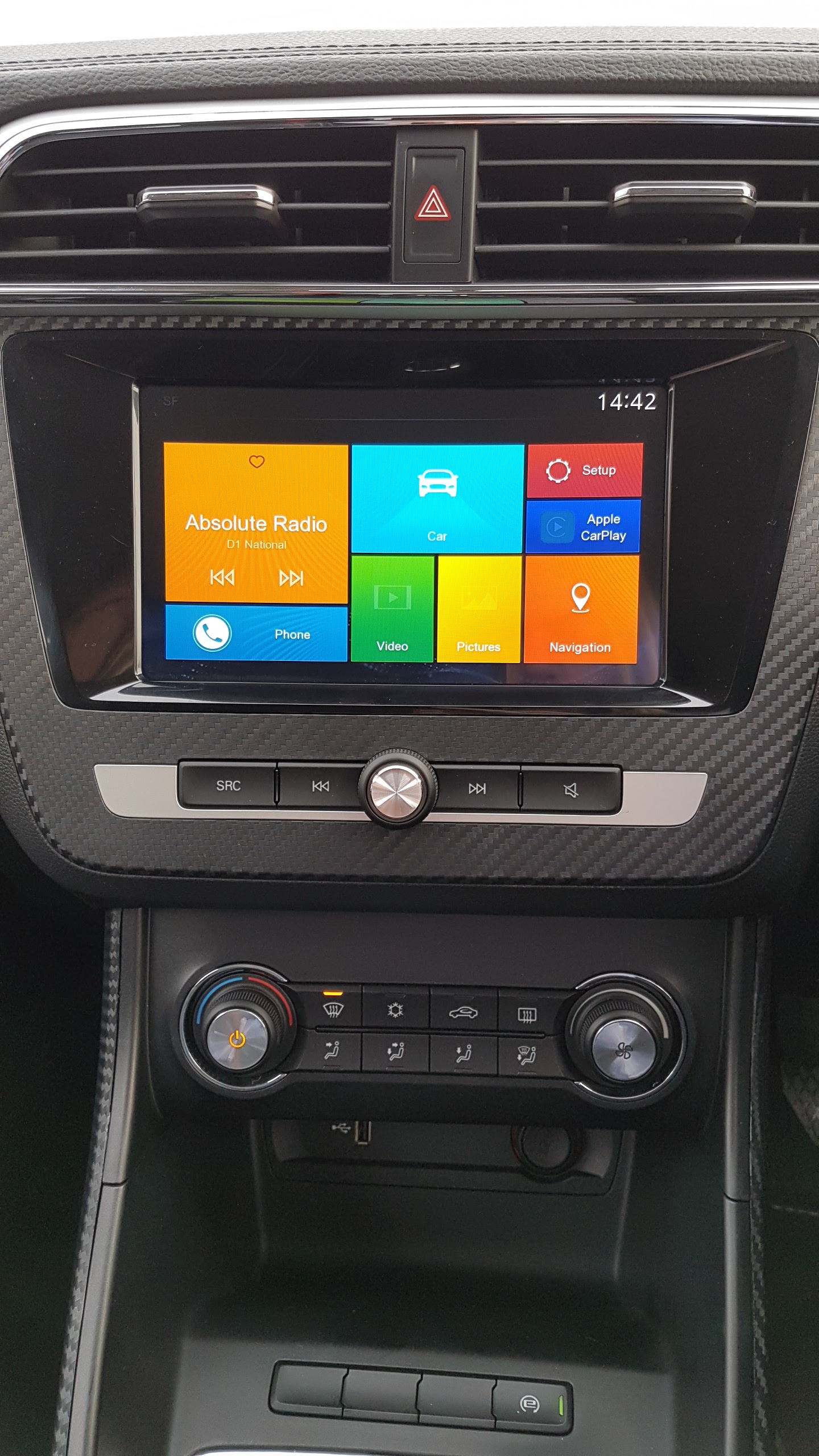 The touchscreen is really the main interior feature. It is also the best one. Meant to be as intuitive as a smartphone UI, the Windows 10-esque home screen is filled with bright, colour-coded rectangles for each area. Having the visual aid of different colours is a helpful response to the issue of drivers not being able to rely on muscle memory when making adjustments on the fly, as, with a quick glance, one can aim their finger sufficiently well at the correct large icon for the function required.

If there isn’t time to even do that, buttons on the steering wheel adjust the stereo and cruise control in the usual way as well. The HVAC controls are, mercifully, separate physical buttons and knobs, which trigger a small info bar at the bottom of the screen when used, showing the new setting. 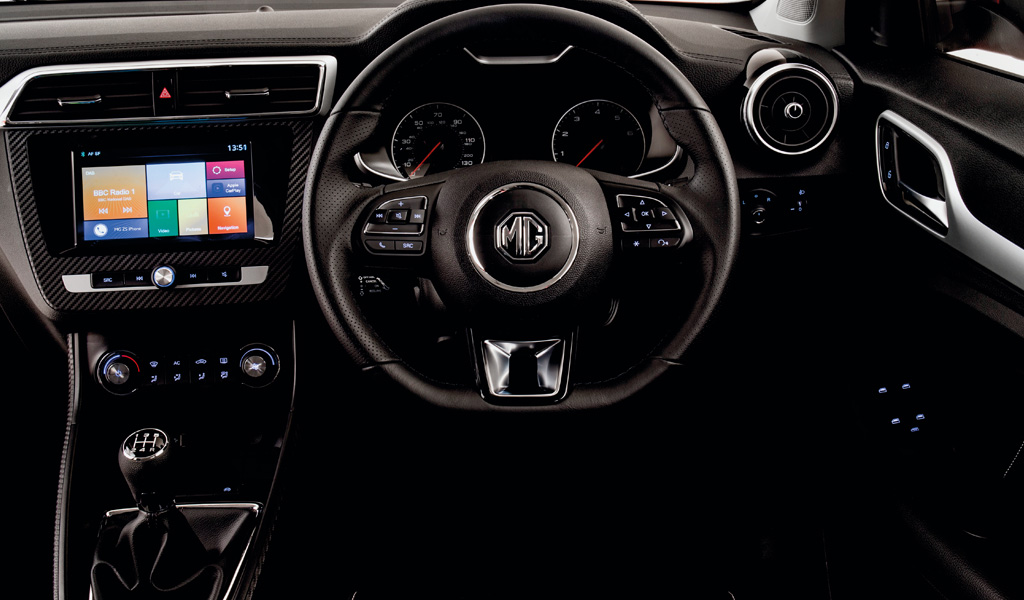 On the move, there are three steering modes, selectable via the touchscreen. This feature (along with the dashboard being angled slightly towards the driver) is meant to mark the ZS out as a crossover for the keen helmsman, but all three settings are far too light and numb, so a keen driver simply turns one corner, puts it into Dynamic and then leaves the settings alone. Said drivers will also be disappointed that the manual gearbox can only be had with the gutless 1.5 non-turbo engine. The other option of a 1.0 turbo three-cylinder, with its smooth six-speed automatic ‘box, is a better fit for the car. The ride is stable and well-damped regardless, but the long and short of it is that the ZS is anonymous to drive. 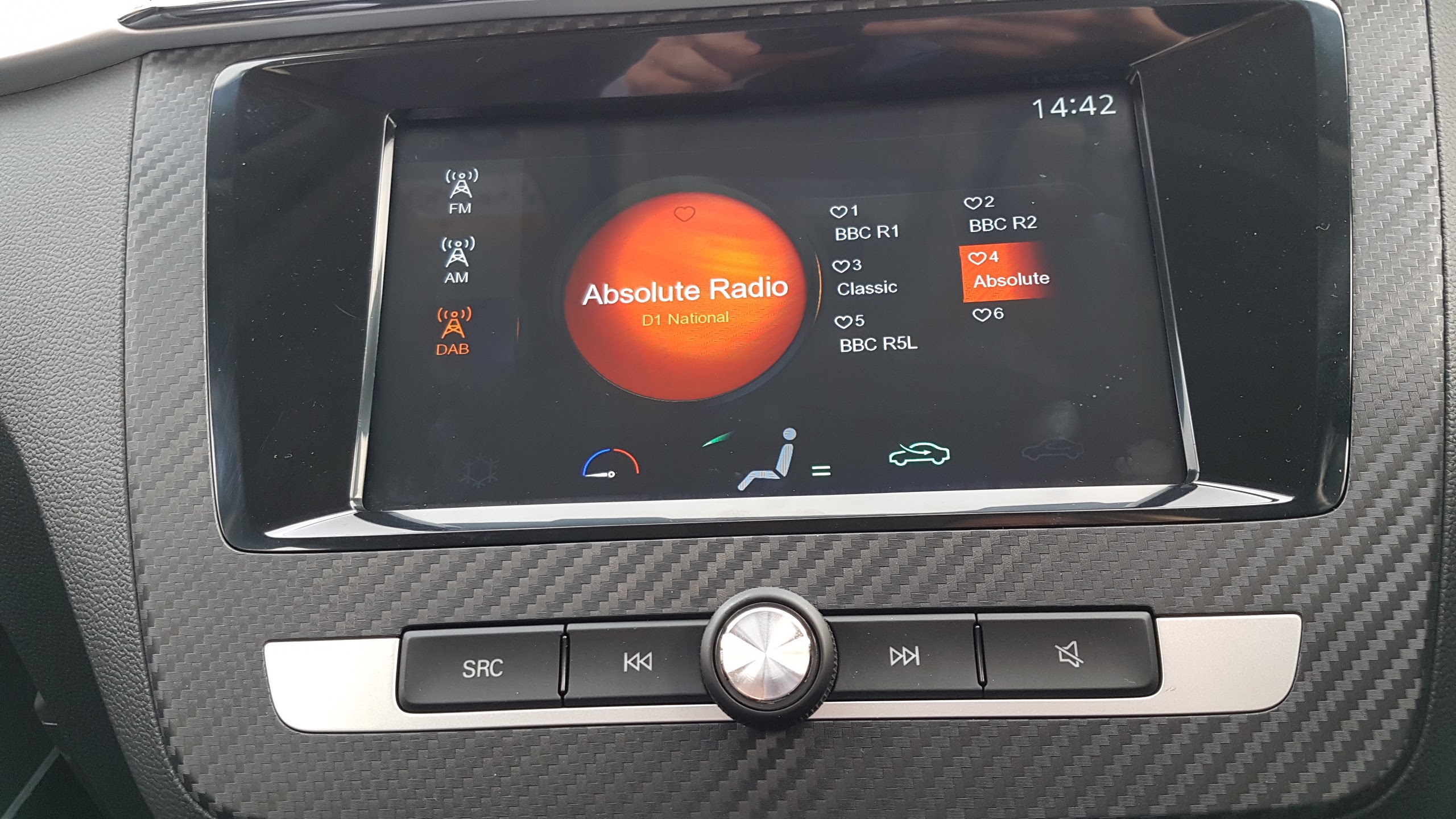 The radio proved simply intuitive to use, a positive which is offset by a somewhat tinny, bass-less sound quality which cannot be resolved by diving into the audio settings and playing with the EQ, nor the fancy ‘sound stage adjuster’ in which you drag your finger across a diagram of the four seats to aim the focus of the speakers at a particular area of the interior. Meanwhile, the slightly less intuitive satnav features clear graphics, which switch to an orange-on-black ‘night mode’ when the headlights are on, to make it less distracting in darkness. 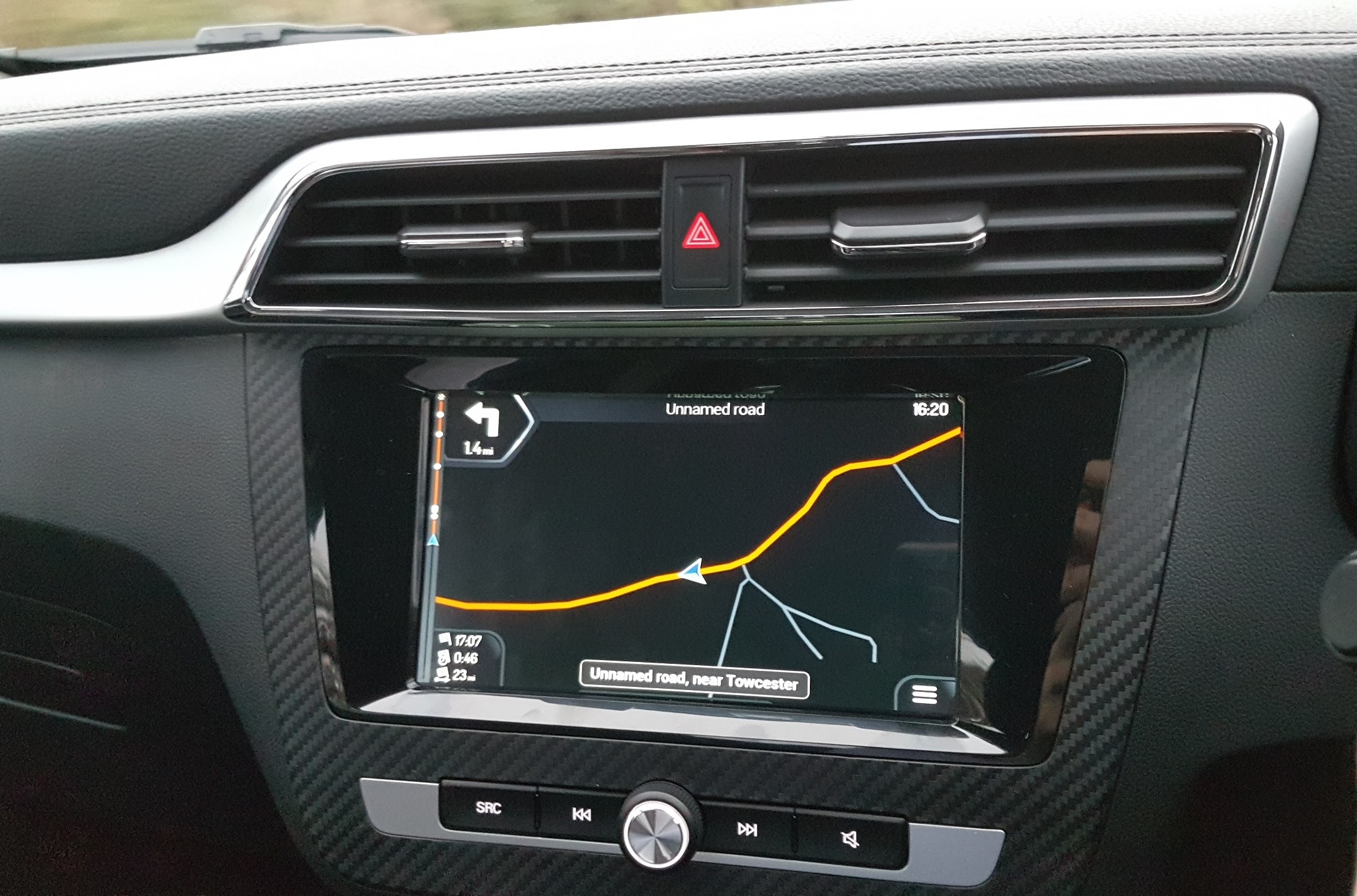 Ultimately, the key appeal of the MG ZS lies in how good a buy it is more than how good a car it is. The company proudly states that, spec-for-spec, their new compact SUV undercuts the likes of the Mazda CX-3, Nissan Juke and Renault Captur by £2-5k while providing more equipment than all of them, plus a consistently-full seven-year or 80,000-mile warranty.

Getting premium features for a non-premium price is a very popular idea, but for your money you nevertheless get a vehicle that’s comfortable, competent and on-trend, albeit not very soul-stirring or distinctive. 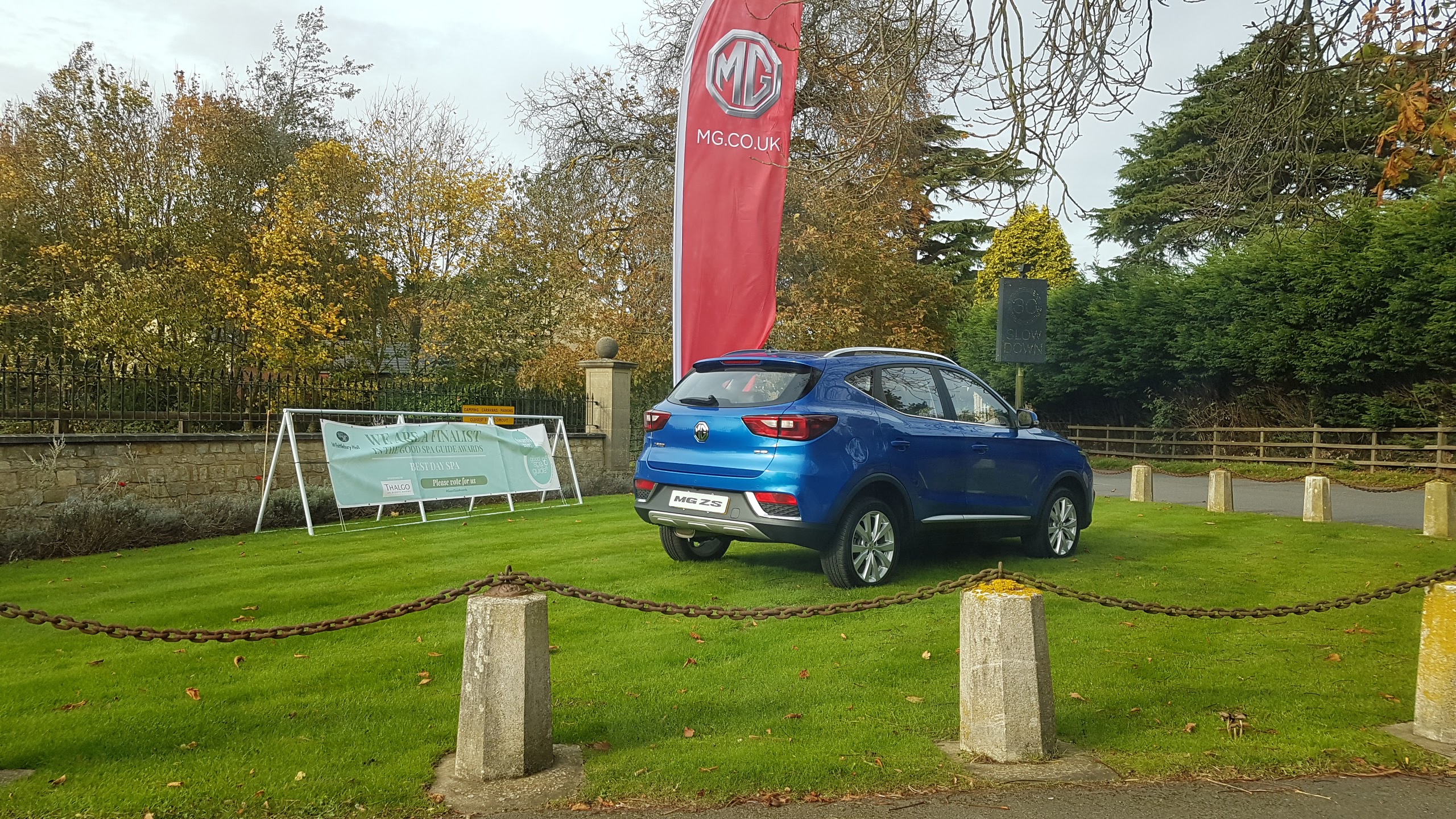