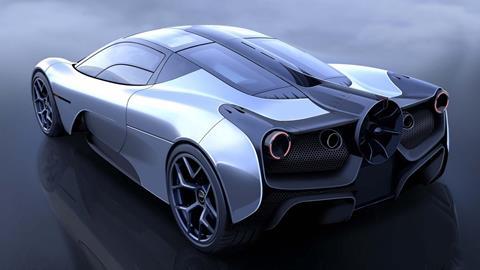 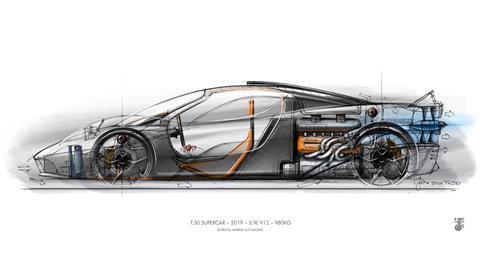 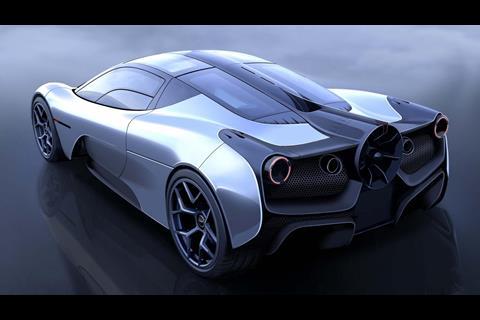 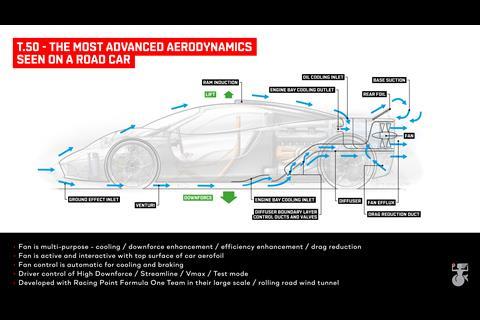 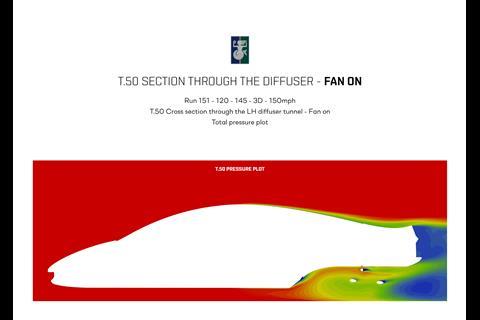 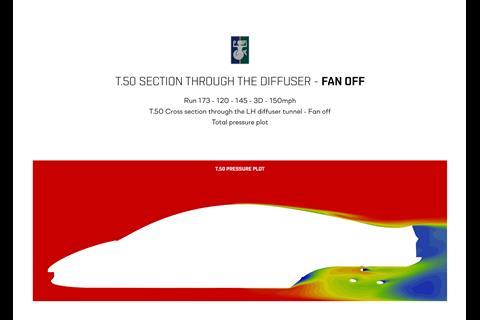 GMA have just released a full rear-3/4 image and some aerodynamics diagrams of the cars (along with some extra stats – see below). Clearly the shape suggested by the original teaser was very accurate, as the same proportions, haunches and dominant rear fan are present. The rest of the rear fascia is basically all grille, with some structural carbonfibre elements holding things together above the obligatory enormous diffuser – and housing relatively modest high-exit exhaust pipes. Simple single-ring taillights have their graphic broken up into three sections – possibly to make them look a little less… Italian. A central, low-profile roof scoop for the V12 evokes the McLaren F1, along with the divided-up side windows where only the lower section opens. The line created by the huge air duct behind the front wheel runs into a shutline between carbonfibre panels.

The British company has now announced its technical partnership with the Racing Point Formula 1 team (formerly Force India; formerly Spyker; formerly Jordan…) which includes access to their aerodynamics facility neighbouring Silverstone Circuit. The latest press release also stated that an ‘integrated starter-generator’ can harvest energy and use it to add around 50 horsepower – bringing the total, momentarily, to 700bhp.

(The rest of this article, below, was originally published on 5th June)

Of course, having been penned by a former racing car designer, the sketch shows a technical crossection of the car rather than some swoopy, moody artwork of the exterior or interior. GMA has confirmed that this car is a spiritual update of the legendary McLaren F1, from its 1+2 seating arrangement and dihedral doors, to its V12 engine, manual gearbox and a focus on envelope-pushing ‘lightweighting’ and aerodynamics. 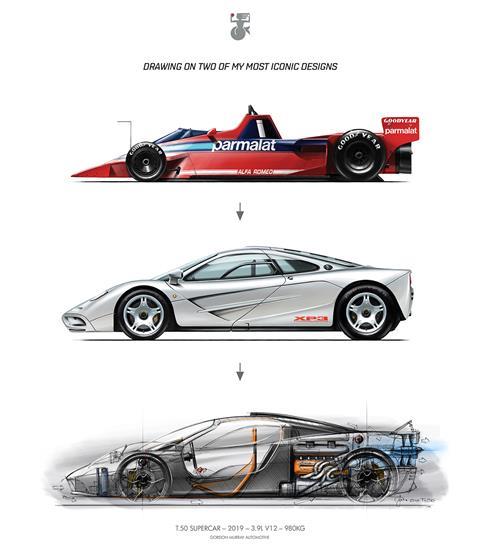 While the proportions are typically cab-forward and low-slung in the mid-engine supercar mold, one stand-out feature is the fan system at the rear of the car, taking up the blue-shaded space above the vast venturis. This is an aero device that first appeared in motorsport in the 1970s and was promptly banned due to the tremendous advantage it could provide (see Murray’s own Brabham BT46b of the 1978 Swedish GP, or Jim Hall’s Chaparral 2J).

Essentially, air from under the car is drawn up through channels and fired out the rear end by the spinning fan, effectively sucking the car down towards the ground to give a constant level of downforce at any speed – as opposed to the effect generated by wings, which is speed-dependent. There is some debate about the extent to which the McLaren F1 employed this idea, but if it didn’t, then this will be the first time fan-based ground effect is being used like this in a road car. The T.50’s fan measures 400mm across, and its presence will dominate the rear end’s design, sitting above the large rear diffuser.

The company states that this approach “allows the upper surfaces of the car to retain purity and beauty, eschewing the exaggerated scoops and spoilers familiar in the segment and equipping the T.50 with the most advanced aerodynamics of any road car.” 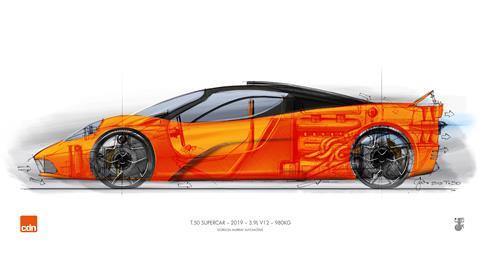 Some speculative colouring-in of the T.50’s suggested bodywork

Other than that, an arched line running through the DLO area suggests a split window for the dihedral doors, much like the McLaren F1… and indeed the new McLaren Speedtail, which uses the same seating layout and is inspired by the same car. More like the F1 is the T.50’s short, high tail of minimal overhang.

Gordon Murray Automotive has said that the car is being engineered, designed and manufacturered completely in-house – although the V12 illustrated in the car says ‘Cosworth’ on it, as the British engine builder is the confirmed powertrain supplier (the 3.9L naturally-aspirated V12 is unique to this car). GMA is clear that any and all additional suppliers will be sourced within the UK.

The claimed technical specifications are somewhat astonishing, with the car’s 980kg claimed weight a full 450kg lighter than the aforementioned Speedtail, and the V12 engine revving to an unmatched 12,100rpm rev limit.