Transport design students at Pforzheim university have exhibited their final major projects for the summer exhibition, featuring some adventurous solo projects in amongst the sponsored semesters. While we will focus on the MA students’ projects, there was also a sponsored project for the BA course with Changan, wherein students had to combine an SUV with a sport. There was plenty of variety and the standard for a BA course was high, so you can find a quick look at those projects on this page.

The first and second semesters of the MA course – the former an exteriors module and the latter focused on interiors – were set a brief by Maserati, dubbed ‘Bipolar,’ in which they had to combine luxury, sport, and Maserati’s brand identity. All these projects were exhibited via an animation featuring a CAD model, alongside the usual printed display board. You can pick through those in the links to the right, along with the third-semester MA Thesis students’ works as well. 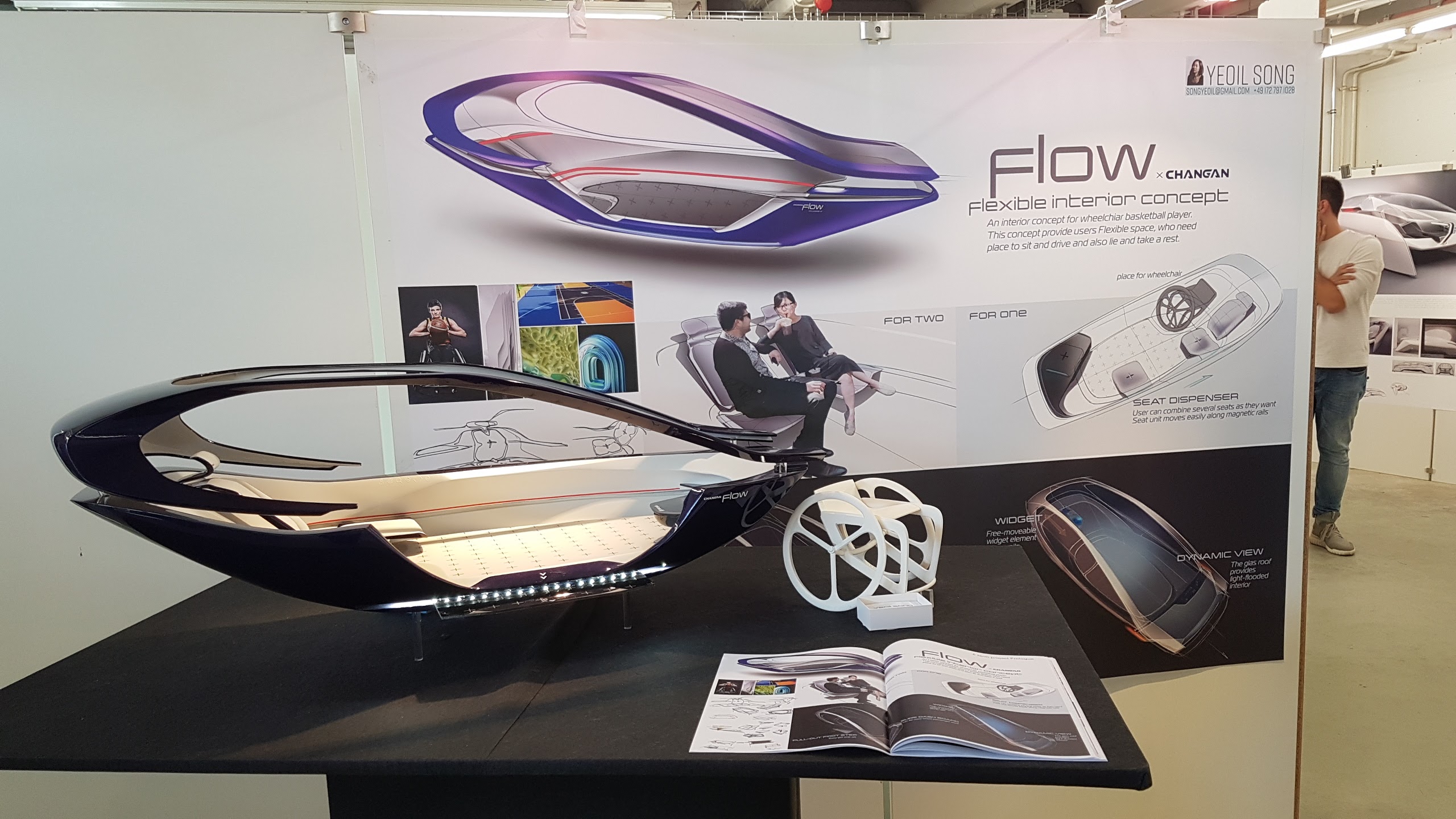 Song devised an interior concept for someone who plays wheelchair rugby. Players of this most brutal of sports can place their chair next to a reclined seat, as well as adding extra seat bases that move along magnetic rails, to make this open plan interior configurable. 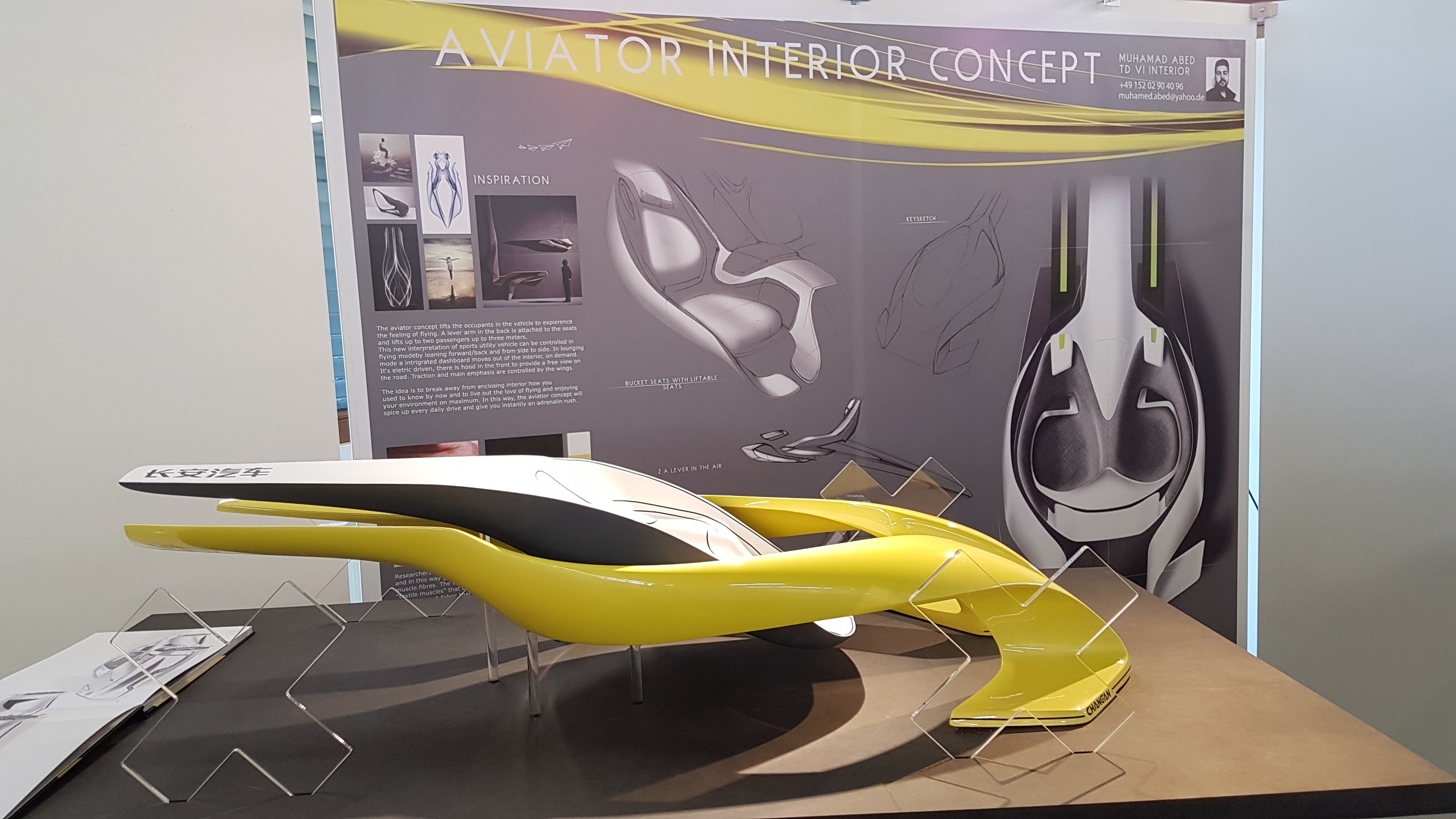 Abed tried combining driving and flying, with an interior concept built around a central two-seat spire which can be raised on a robotic arm by up to 3m. The point of this is to give a sensation of flying above the ground, with a feeling of openness and connection to the environment. When raised up, the vehicle is controlled by leaning, otherwise it just acts as an electric AV. The rest of the model is minimalist and meant to be aerodynamic. 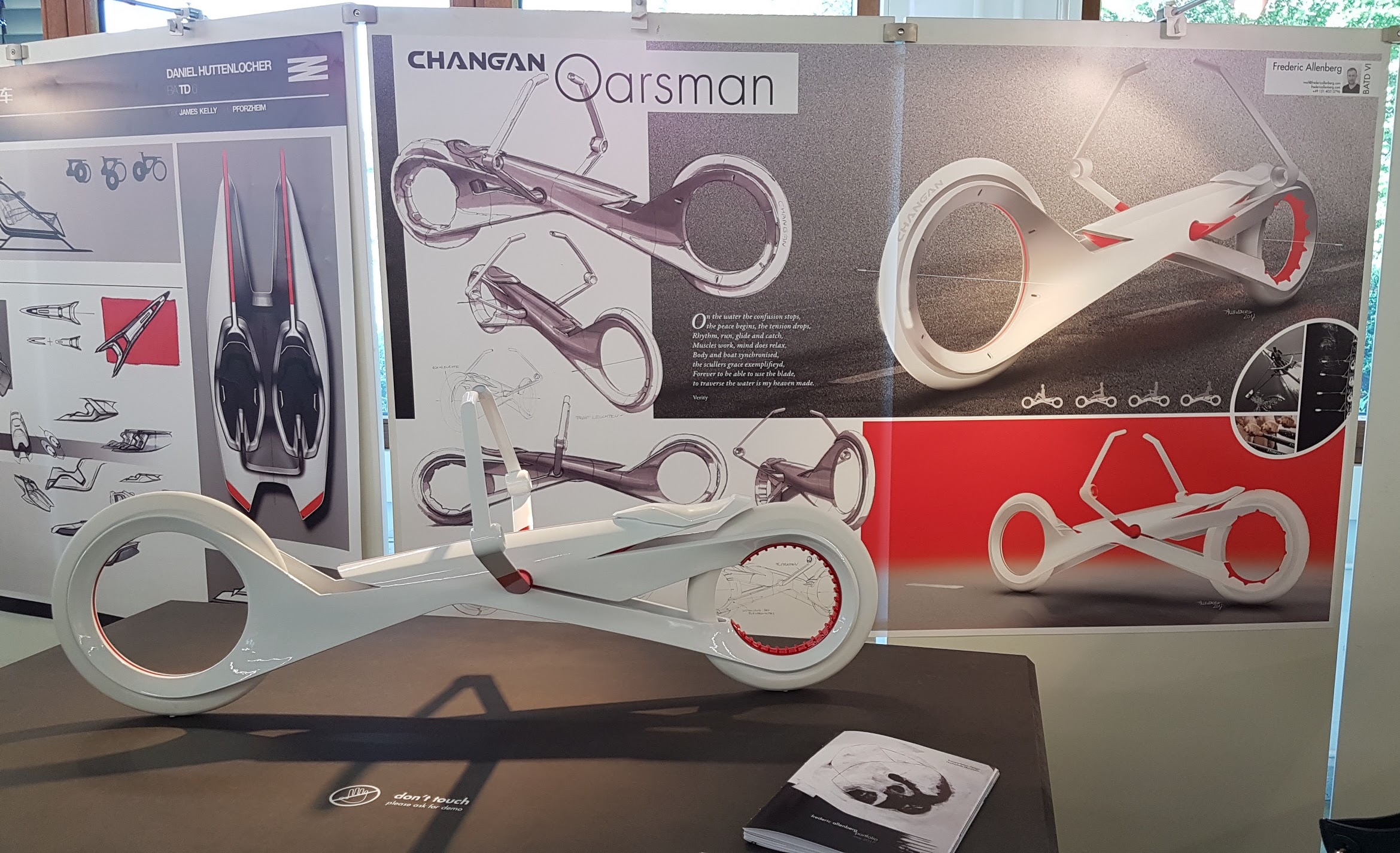 Allenberg’s project is essentially a mobile rowing machine. The bike is propelled either by the rider sliding fore and aft on top of it, or by an electric drive system. The rider can charge the battery and then be transported the rest of the way autonomously once they’ve worn themselves out from all that healthy exercise. 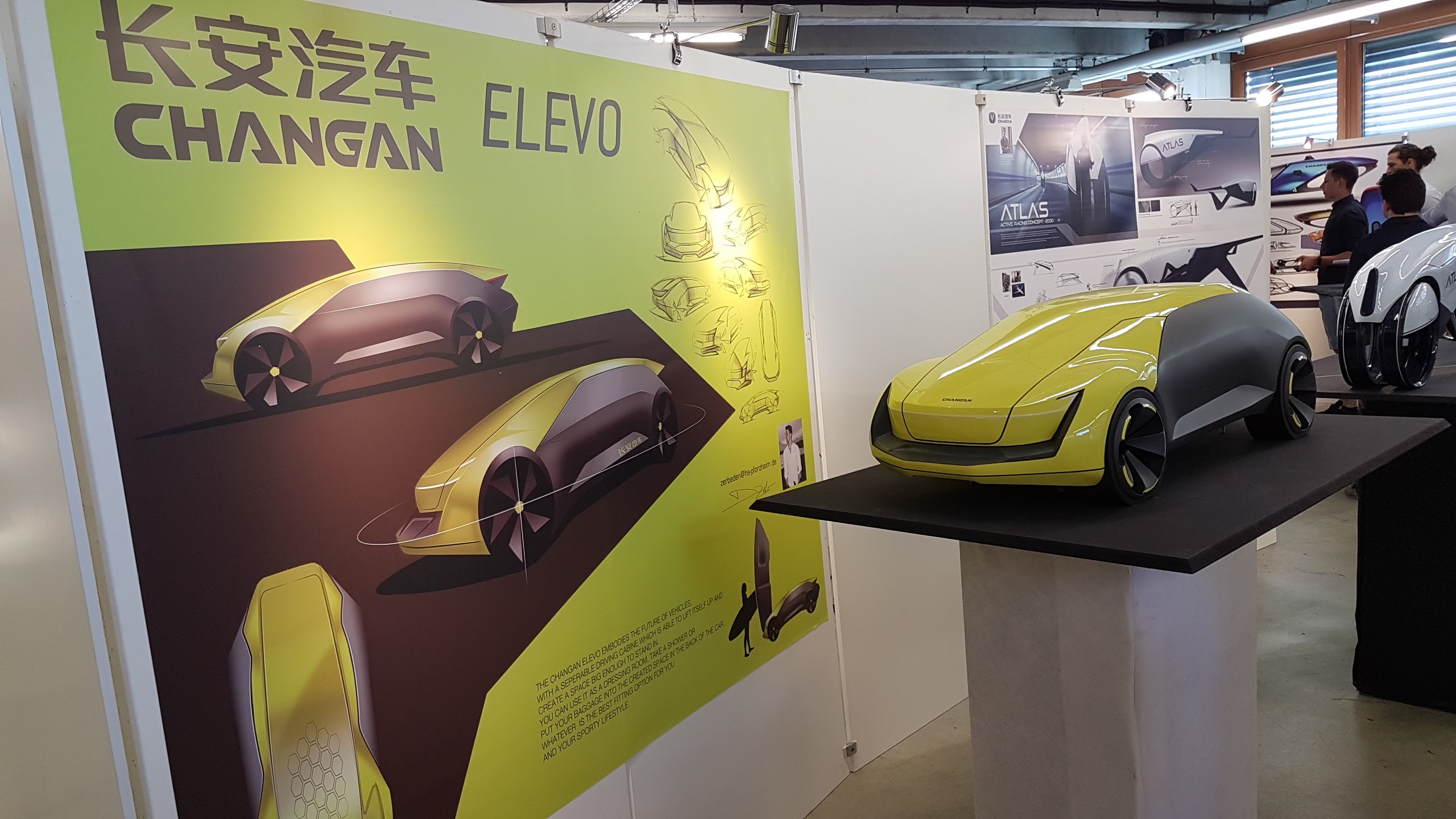 This project is aimed at people who enjoy water sports. The vehicle’s central section (in highlighter green) is hinged at the front and can become a vertical cubicle to use as the user sees fit. The vehicle is carefully weighted at each end to keep it stable once the centre of it is standing up at the nose. 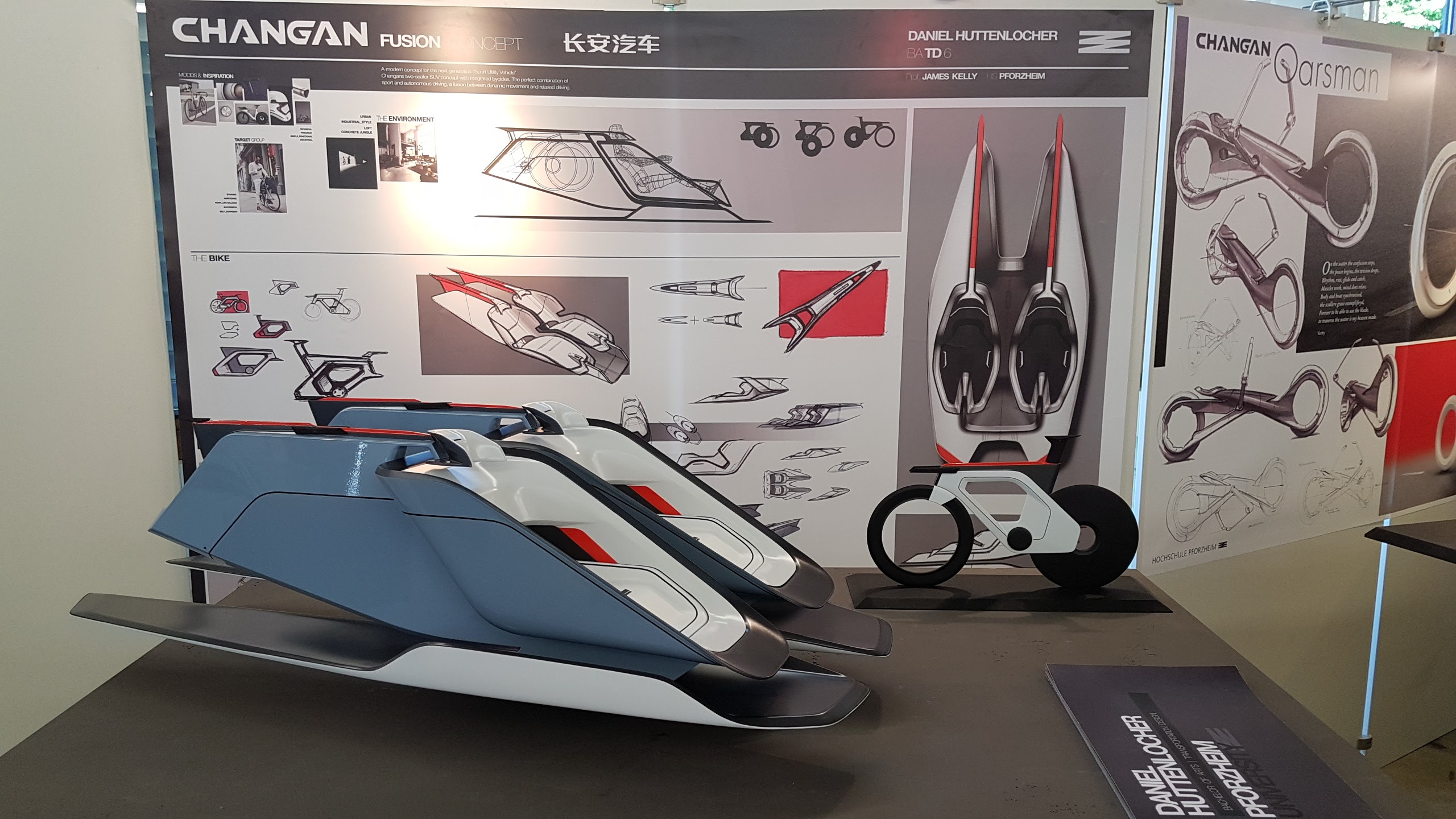 Huttenlocher’s two-seat SUV integrates a pair of custom-designed folding bicycles into sail-like vertical slots in such a way that they seemingly disappear. The bike itself has a rear wheel that uses the chainring mechanism to swing forwards and save space. 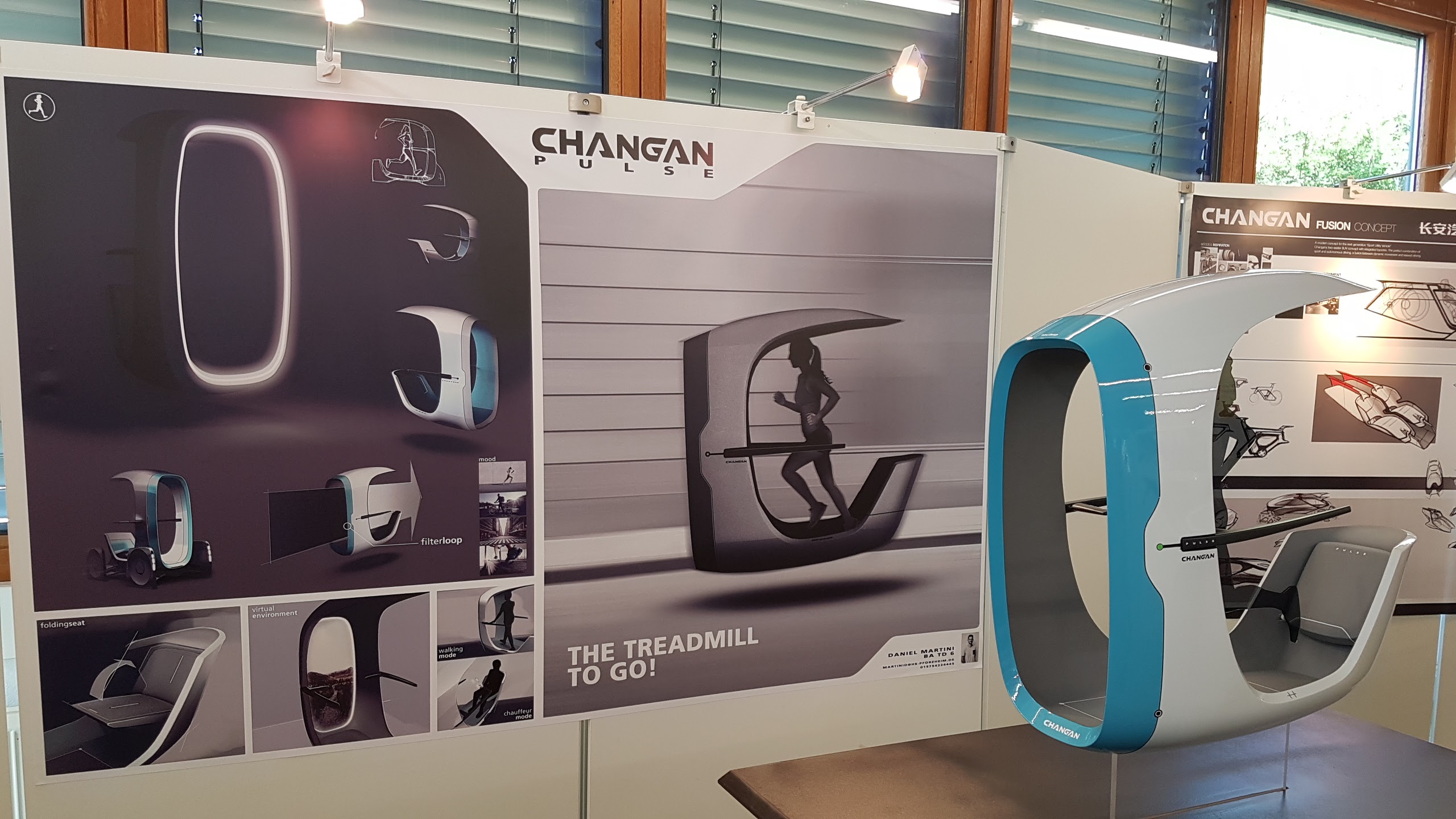 This one-person concept combines the car with the sport of running, by use of a treadmill. The standing-height module includes an air filter to protect one’s lungs from traffic fumes, plus a complimentary HUD, while a cinema-style fold-out seat allows for some rest and recovery. The module could conceivably sit on an EV chassis. Seems like a missed opportunity for some Martini Racing stripes, though… 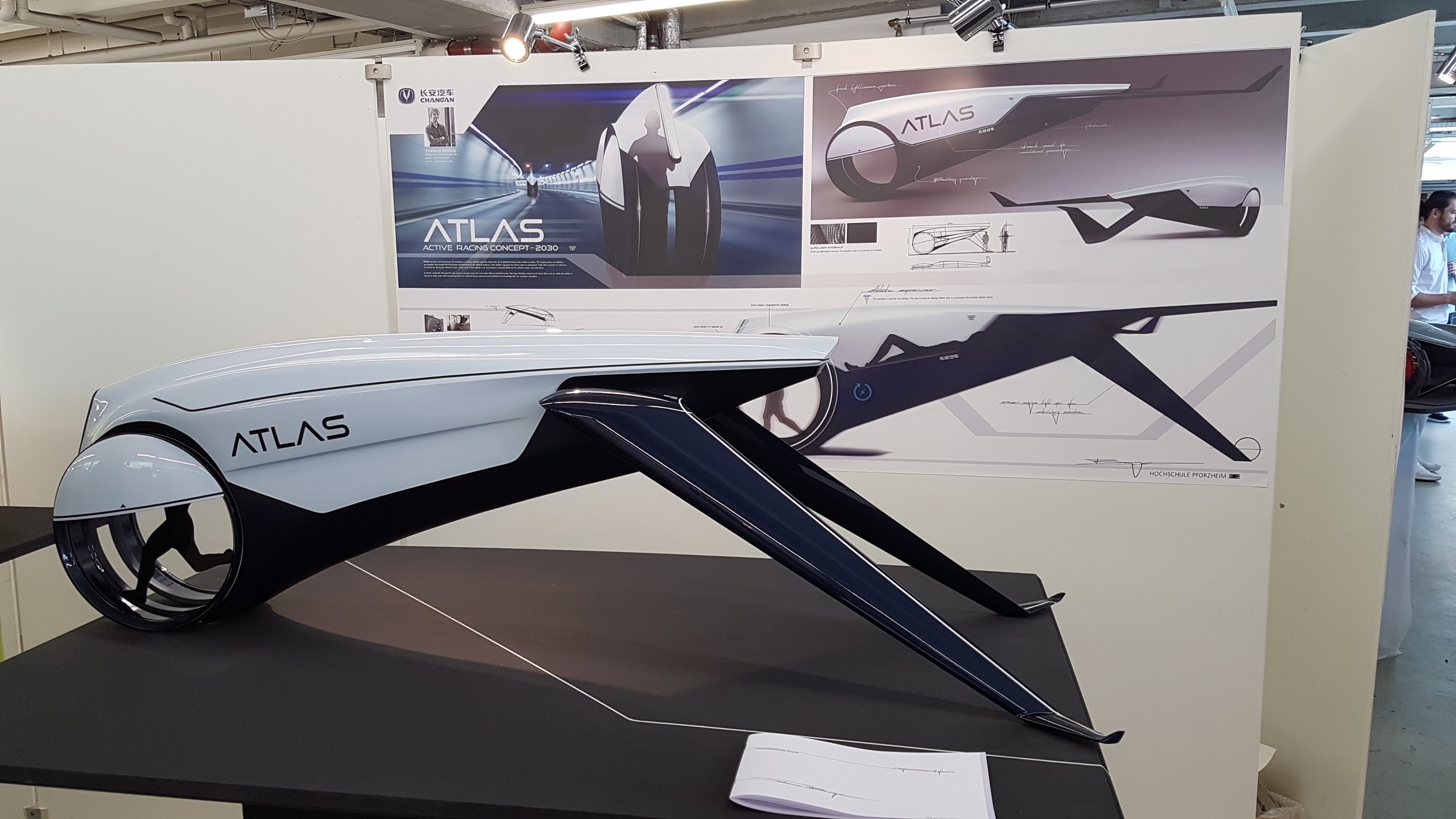 Berge’s take on augmenting running with a vehicle involves the user running inside a hub-less front wheel to propel themselves. At the rear, a pair of wings initially act like skates at low speeds, before lifting up to use airflow to hold up the long tail. A compartment inside the vehicle lets you recline and relax. It is envisaged that these vehicles would be raced against each other in cities. 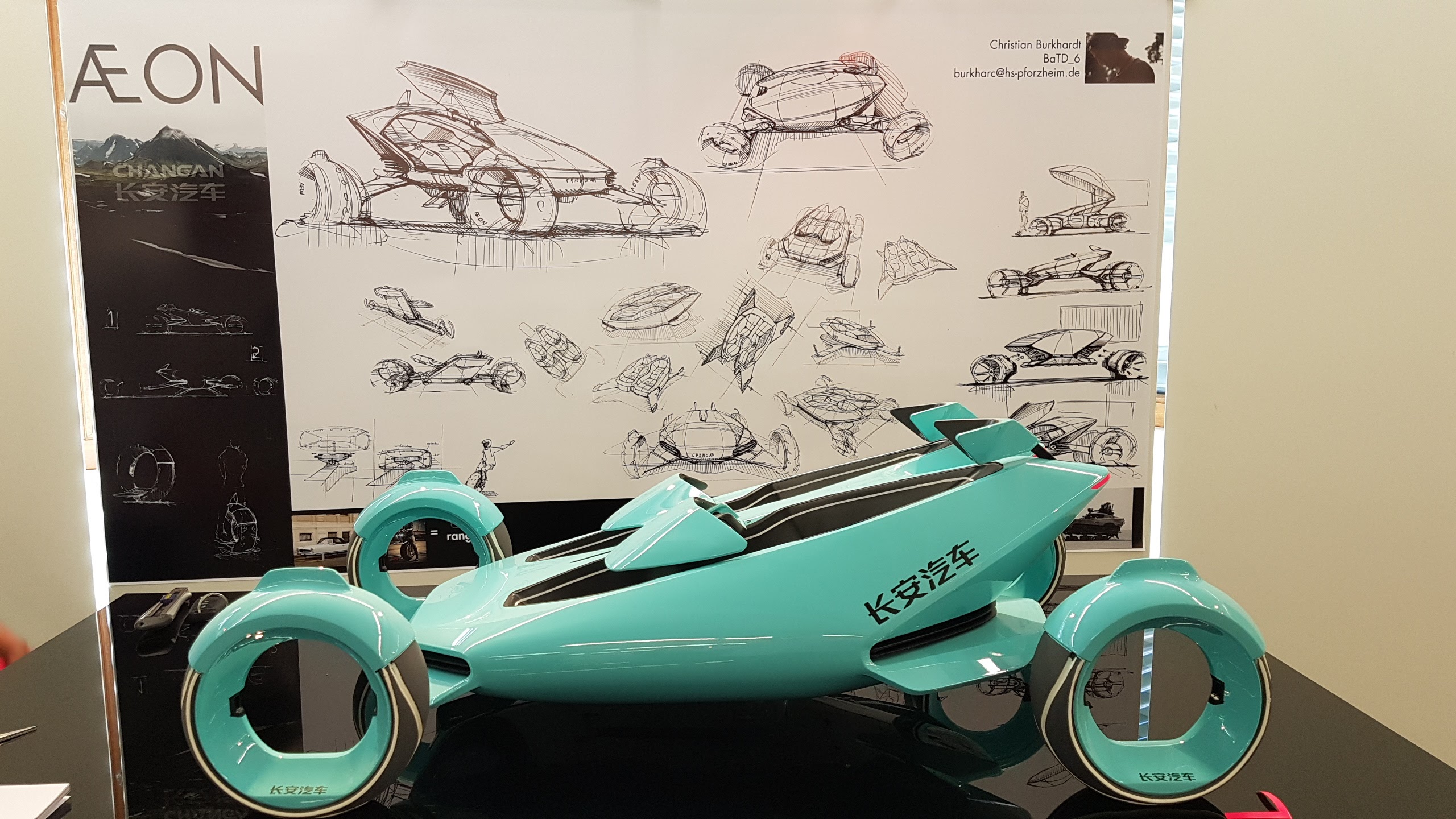 The USP of this project is its claim to effectively have an infinite range. Each wheel hub is its own self-contained electric AV, which connect to the main chassis to drive the car – but if the battery level is too low in one or all of the hubs, they can detach from the vehicle (when stationary, of course) and whizz off to a charging point while freshly-charged ones appear to take their place. Some complex background communications system(s) would be needed to coordinate all of this, though. Less complicated is that a motor hub can double as an electric unicycle. 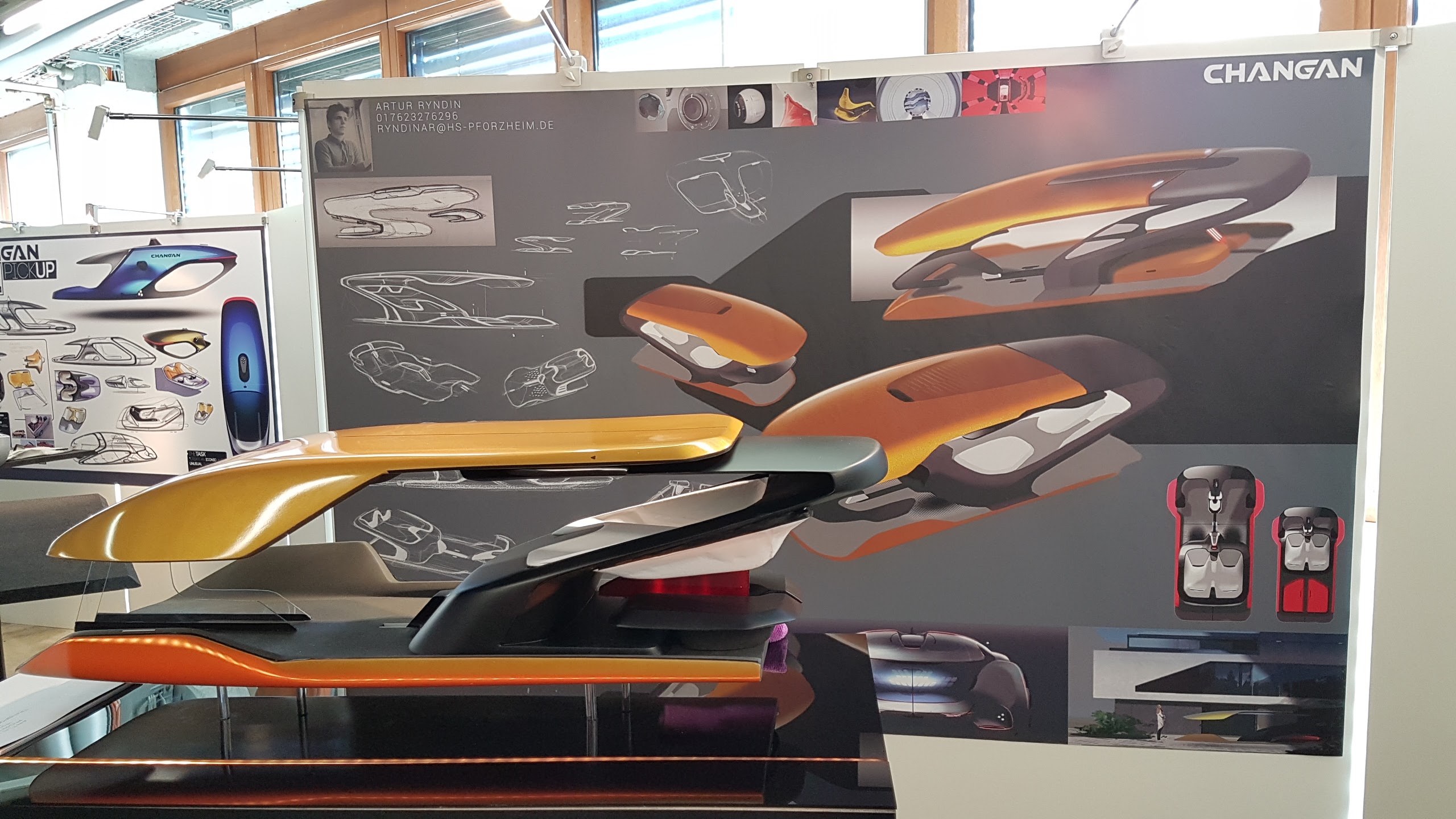 Regardless of what armchair pundits tell you, motor racing emphatically is a sport. As it experiences the same shift that road cars are (albeit a few years behind the curve), Ryndin wants to keep the essence of fast driving alive, with a vehicle that either lets you recline at the rear end, or slides you forwards to let you take back control, during which transformation the vehicle gets shorter for better direction changes. 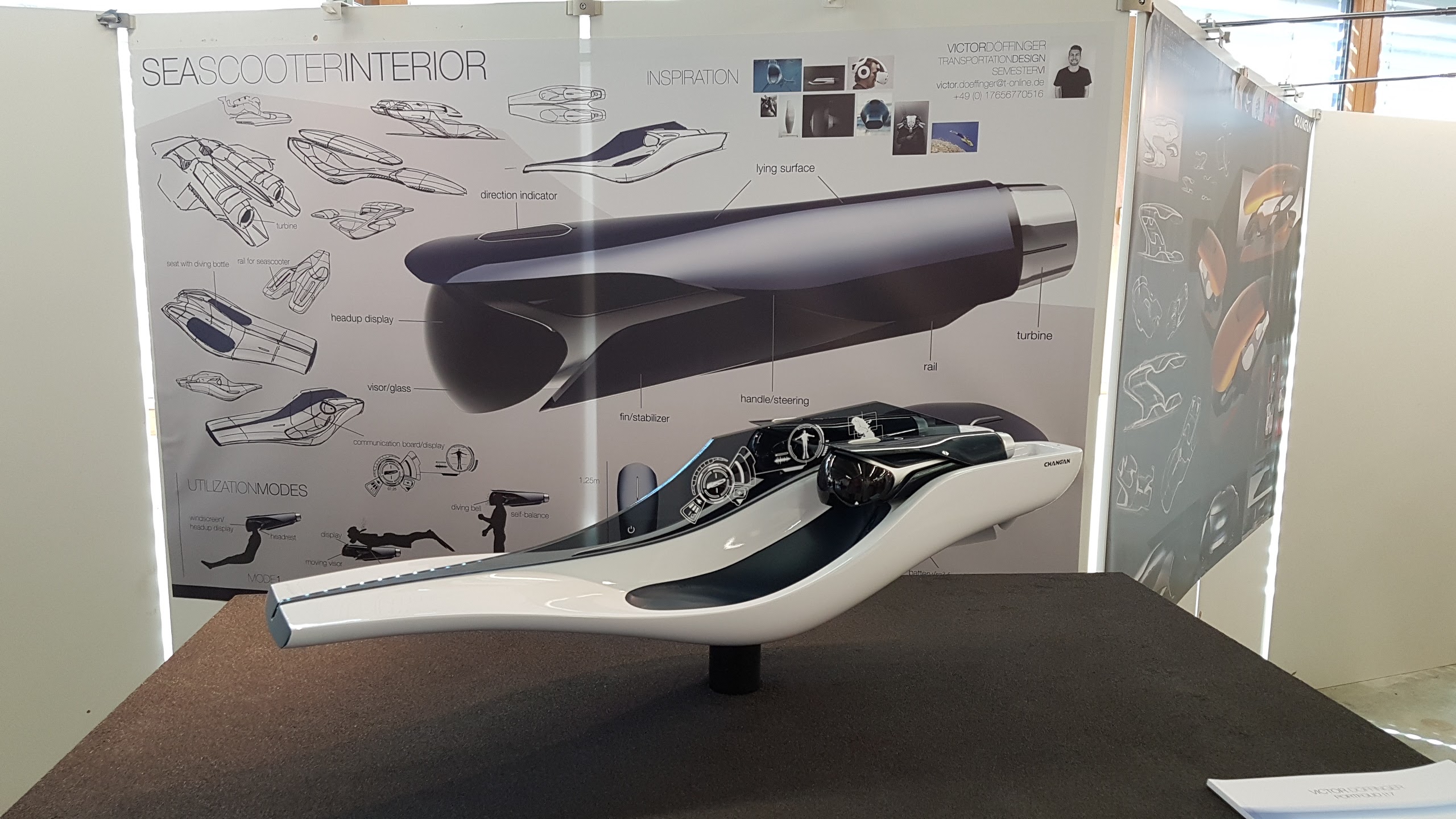 Döffinger’s combination of driving and diving involves integrated sea scooters behind each seat. When part of the vehicle, they act as a helmet-sized windscreen and HUD over the heads of each occupant (although they can still share information with each other via the central dividing touchscreen). They can then detach to either act as electric sea scooters, or fitted with an air tank to work as a very long, self-balancing diving bell. 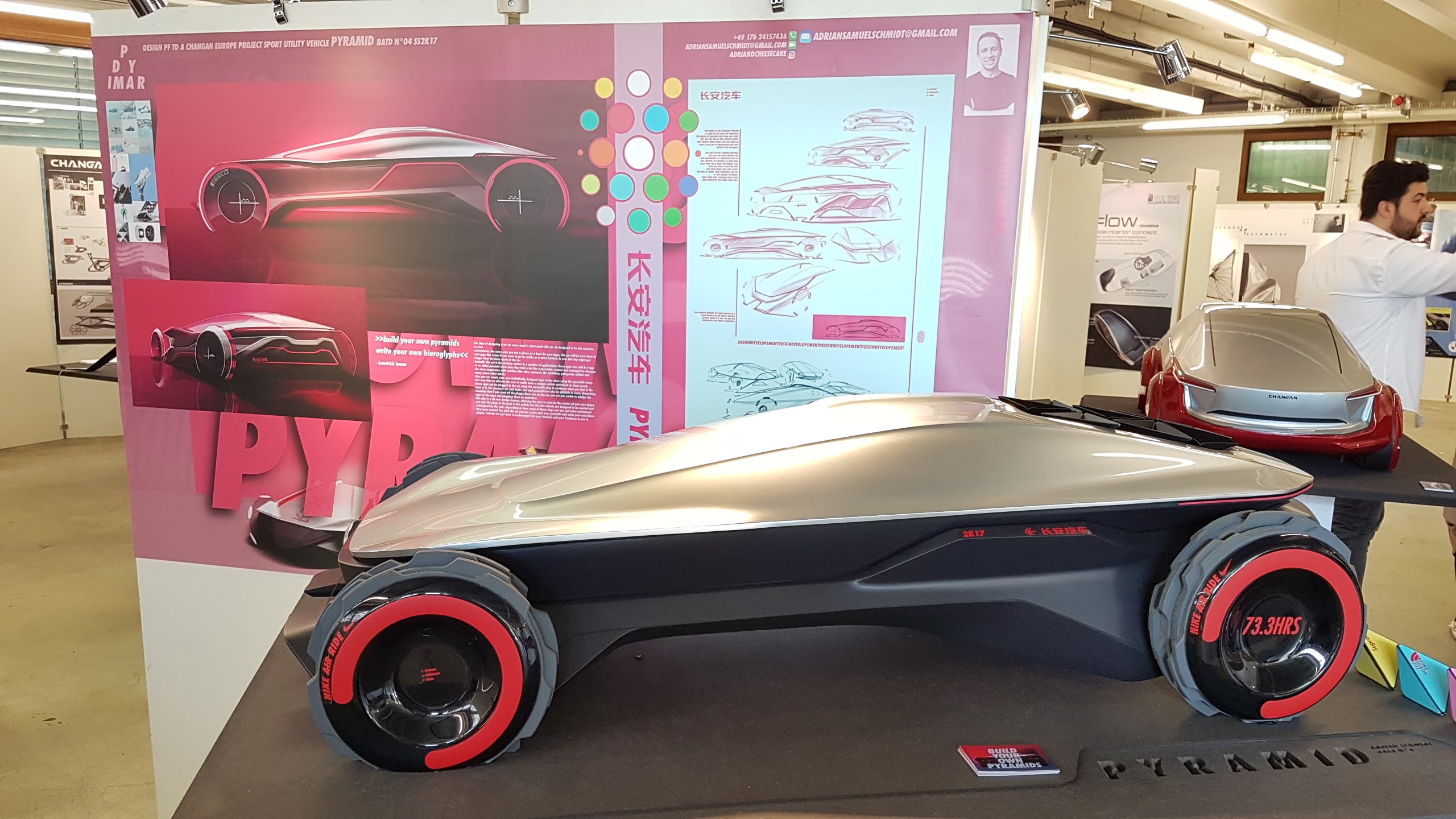 This vehicle can be combined with any sport the user fancies, by way of app-like pyramids the user buys separately to plug into triangular slots at the back. The car then transforms accordingly to add app-specific functions. With nine slots for app pyramids, you can even combine functions. Similar configurability is found at each corner, with data screens on the wheel faces and modular tyres comprising multiple slide-on rings, with a light ring in the middle of them for night visibility. 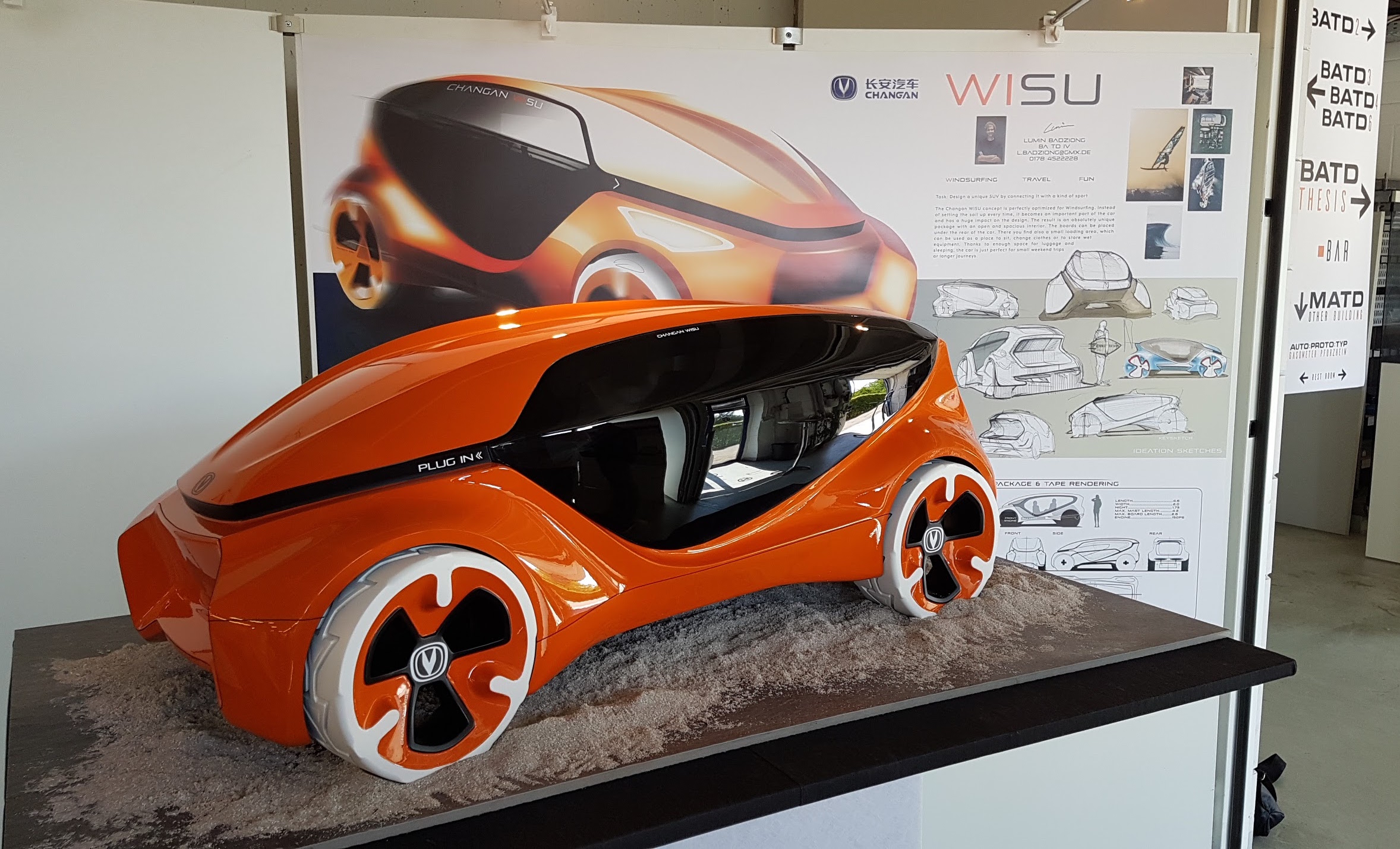 Badziong’s ‘WiSu’ concept is made for windsurfing. The three-metre-long side DLO, while it resembles an insect’s wing, actually detaches from the car to become the sail for a board that’s slotted into the rear bumper, on each side. Above the boards is an area for extra equipment that doubles as a bench. The display model, whose window sails really did detach, had a minimalist, open-plan interior with a large screen front and centre, represented by Badziong’s phone. 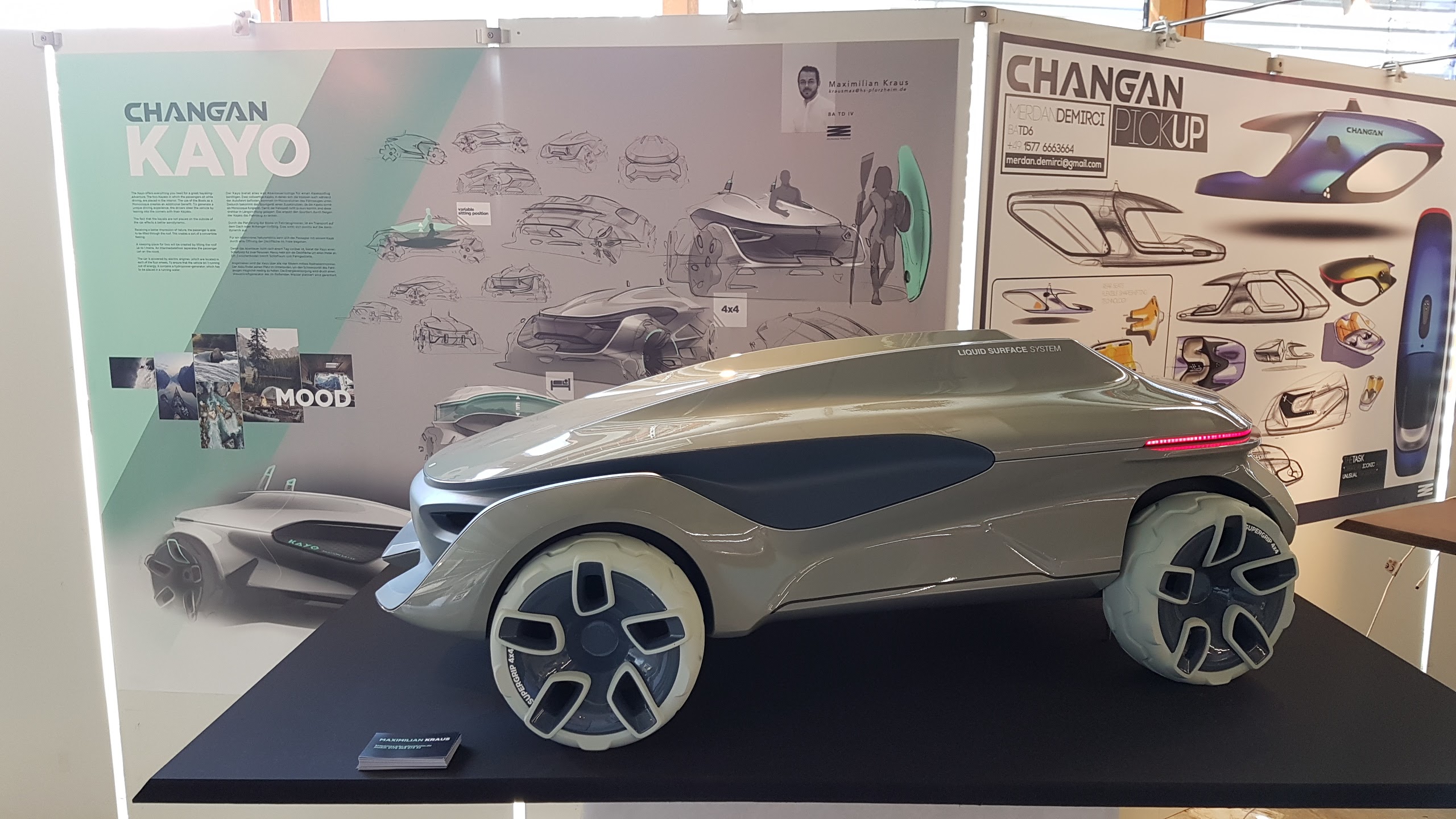 Kraus has merged driving with kayaking, creating a two-seater with a fabric-like top surface that ‘unzips’ to reveal the seats, instead of having doors. Each seat tilts during cornering to add to the feeling of kayaking, while that flexible top surface can also rise up like the roof of a camper van, during a weekend away. 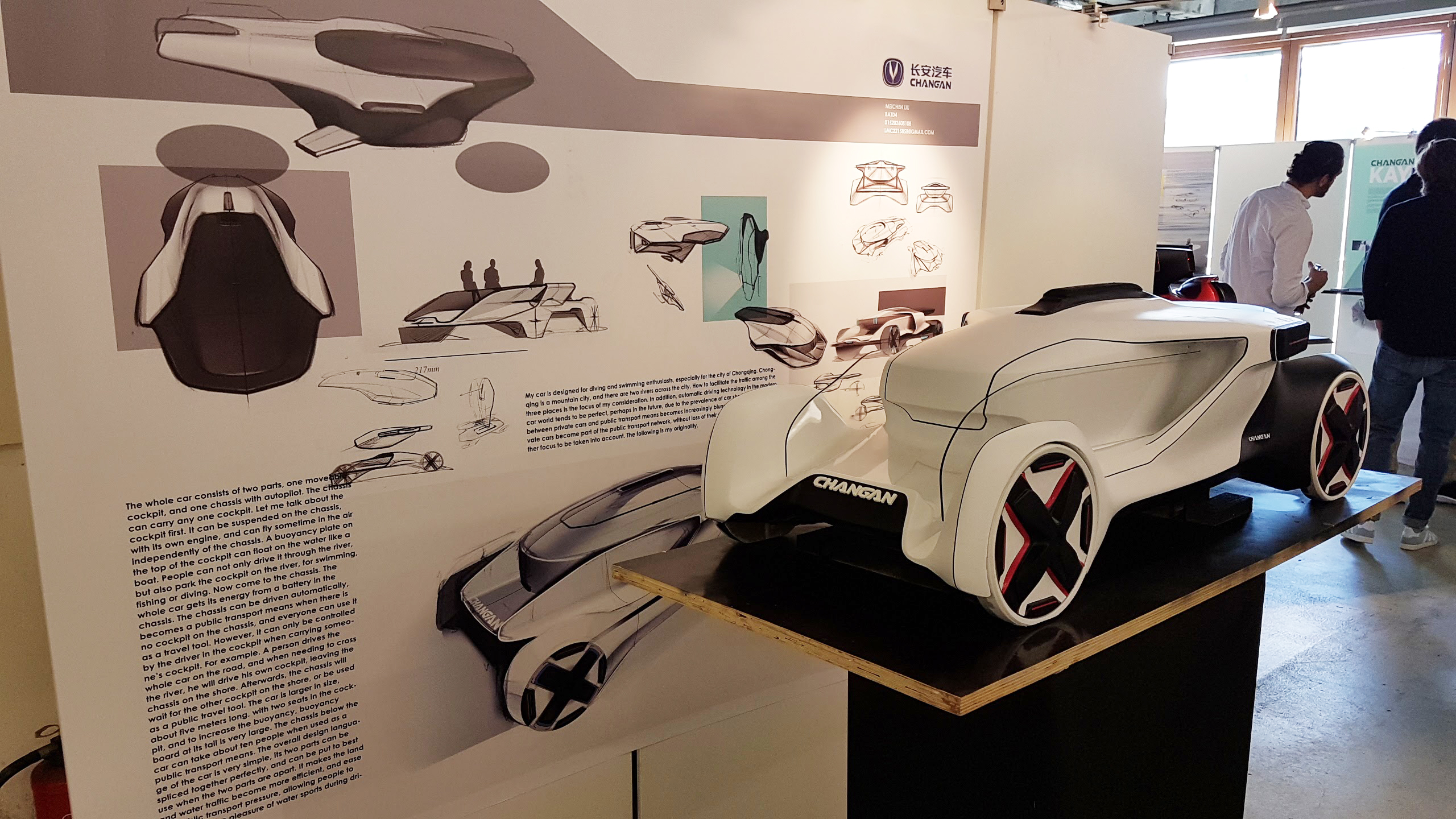 Liu’s electric AV has a body that can separate from the chassis for use in the water. To keep the whole vehicle useful, the chassis, instead of sitting idly by the waterside, can be used as an autonomous taxi, or alternatively just act as an area to sunbathe. 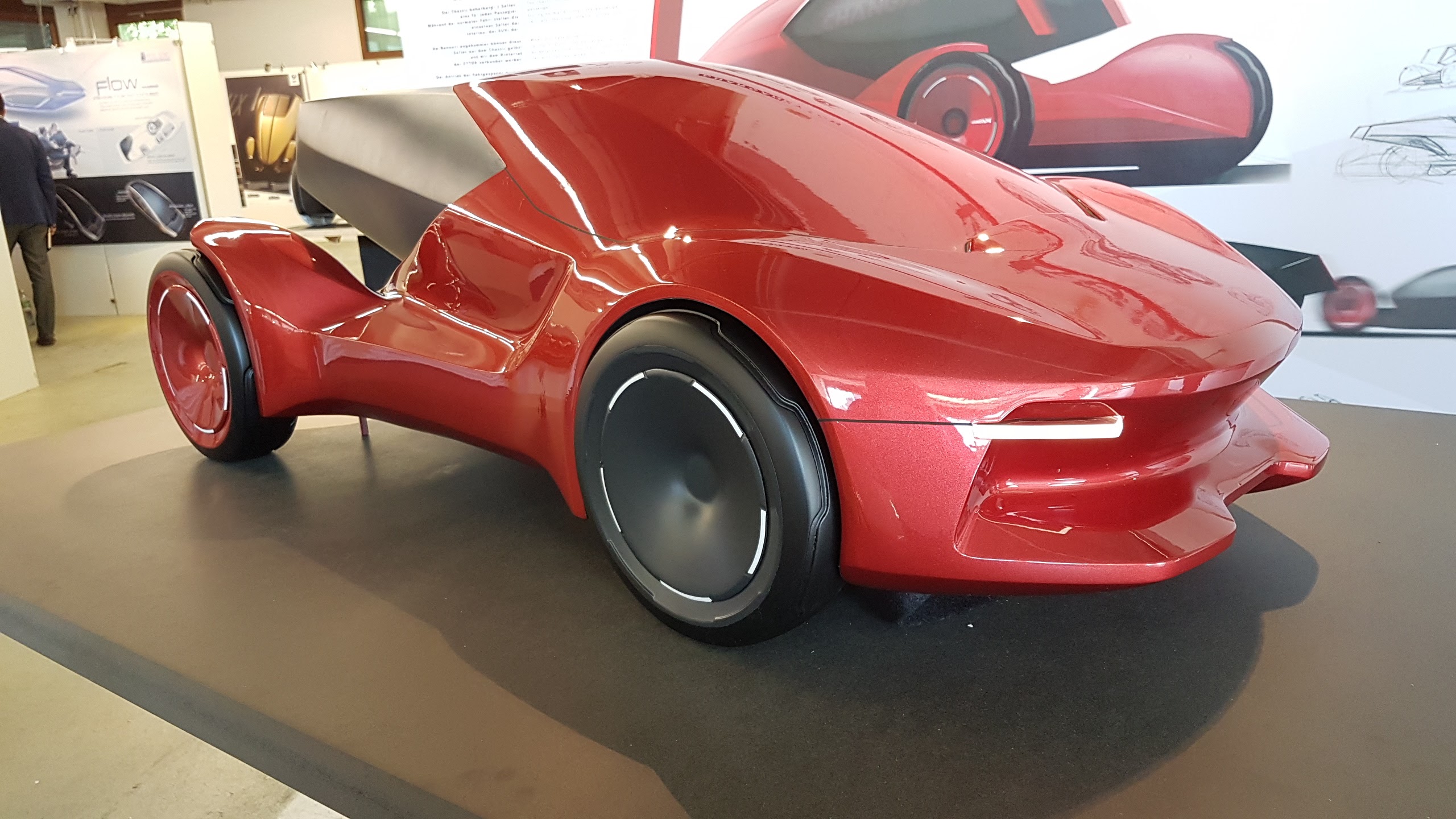 To bring back the brutal thrill of Roman chariot racing, the black pods in the back of Faulhaber’s vehicle pull out, taking the rear wheel with them, to become electric motorcycles for use on an appropriate track (the rear end sits on two concealed inner wheels when the ‘chariots’ have taken the drive wheels away). The rest of the time, it’s a head-turning electric SUV. 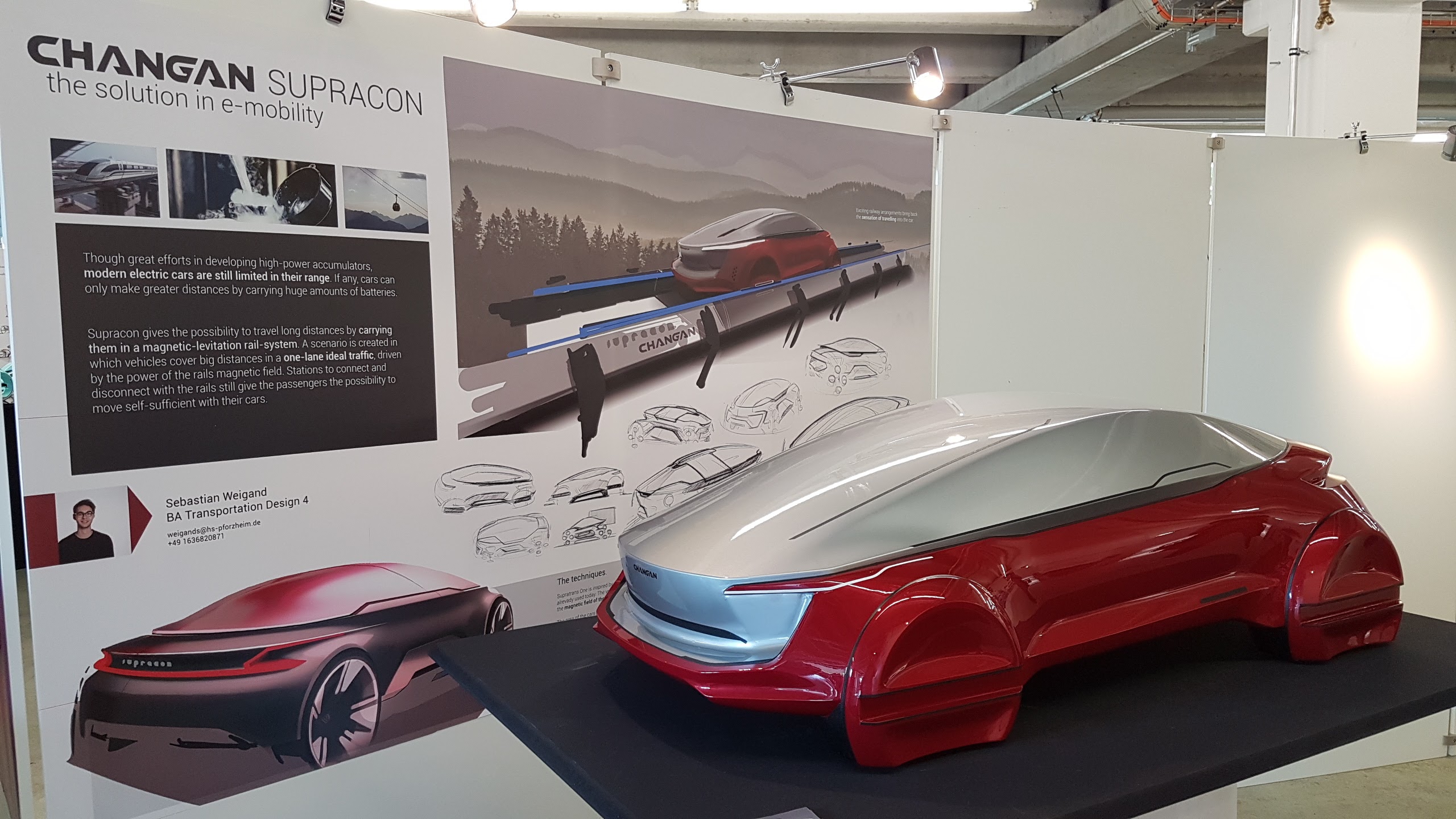 Weigand’s ‘Supracon’ tackles the thorny issue of battery longevity. For long-distance journeys, the electric two-seater can connect to a monorail system and draw power from that, avoiding use of its own onboard battery until you’re back on the road nearer your destination. 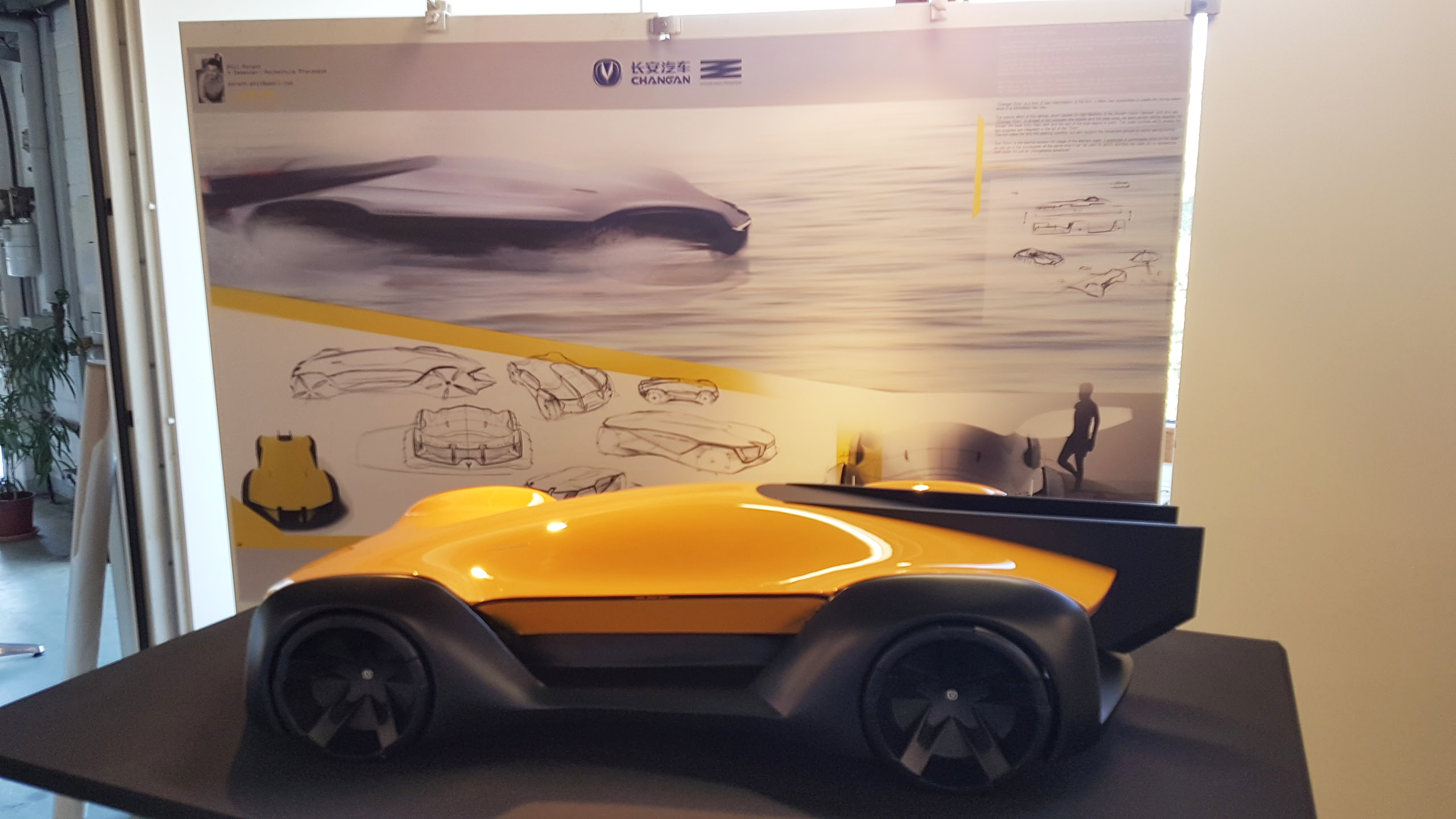 Porath’s project is the intersection between a supercar and a powerboat racer. Once it’s arrived at the waterside, the body slides off the chassis and what were previously active air rudders at the back become, well, just regular rudders. A pair of turbines provide propulsion in the water. 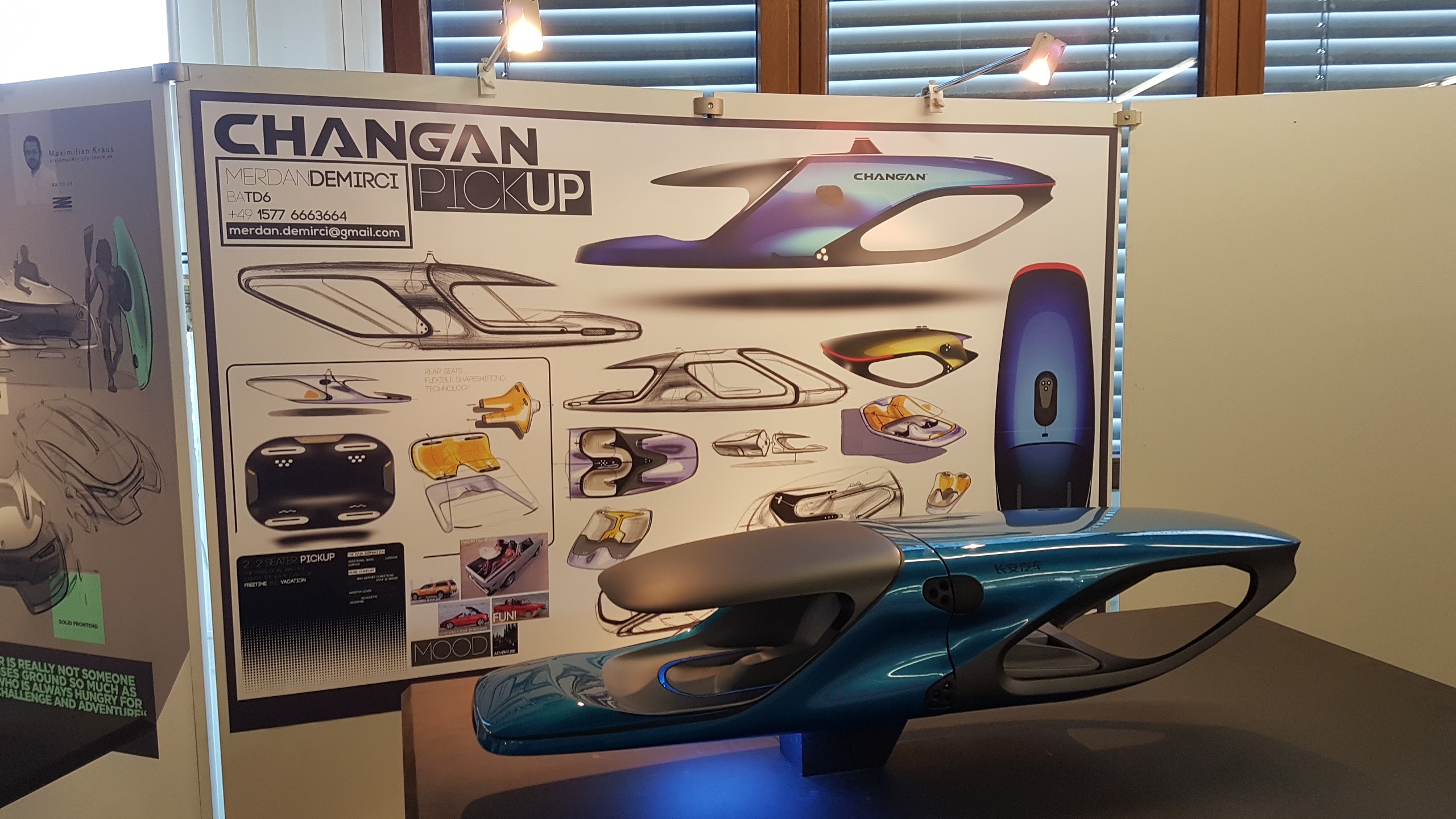 Demirci’s ‘Vacation’ project is inspired in part by the loophole-exploiting Subaru BRAT, with its rear-facing jump seats behind the cabin. Less like the old pickup is the fact the chassis is comprised of two halves, the rear of which twists around to turn from a covered rear seat area to an open-top sunbathing deck. Up front, a dashboard rises out of the floor when required.

Don't forget to look through the list in the sidebar for all the MATD students' works.