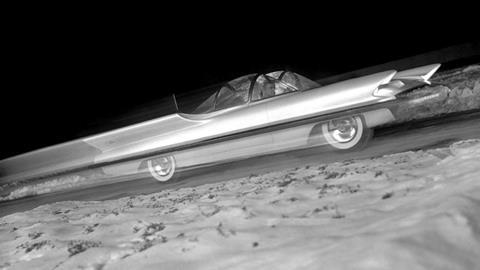 The Lincoln Futura concept car is most widely known in its later incarnation as the Batmobile in the 1960s television series Batman. But that is just one part of its long life, and the car is proof that some concept cars can lead interesting lives far beyond the motor show circuit

The Futura story begins with William (Bill) Schmidt, who was the head designer at Lincoln in the early 1950s. He started his career at a Ford trade school in 1940, worked on the B-24 Bomber in World War II, moved into design following the war and then became lead designer at Lincoln in 1947. By the 1950s, he was a respected ‘old hand’ in the relatively small world of Ford design, though only in his early thirties.

Schmidt had the idea for a concept car that would represent Lincoln design as it moved towards 1960. He sketched out some ideas for a flashy coupé and showed them to Benson Ford, Henry’s grandson and head of the Lincoln-Mercury division of Ford. Benson had a weakness for concept cars, and Schmidt was confident he could sell the boss on his ideas.

Sure enough, Benson liked what he saw and asked Schmidt to make an estimate of the cost of the project. He then gave his approval, allowing the use of Lincoln-Mercury discretionary funds to design and construct the car. By this time the car had acquired a name – Futura – the name of a typeface Schmidt liked.

The idea for the car had come to Schmidt on fishing trip to the Caribbean with his friend Bill Mitchell, who was Harley Earl’s second-in-command at GM Design. On a winter vacation in 1952, Mitchell and Schmidt were escaping the frigid Detroit winter floating on tropical seas and marvelling at the sea creatures they saw (and caught) there.

On one memorable dive into the crystal blue of a lagoon, Schmidt found himself face-to-face with a shark, and its terrifying beauty made a lasting impression on him. He and Mitchell marvelled at the sharks, marlins and manta rays – so graceful, so fluid in their movements, and so menacing in their presence under water.

Both men would retreat to frozen tundra of Detroit and began sketching cars that had a similar presence. At the same time, every designer in Detroit was influenced by jet fighters and rockets. The Streamlined Moderne, a remnant of the 1930s, was rapidly fading as a design language in Detroit. The emerging forms were crisp, and sharp, sleek and menacing.

Schmidt’s ideas would emerge in the Lincoln Futura. Mitchell’s would take shape in the form of various Sting Ray, Manta Ray and Mako Shark concepts.

From Schmidt’s original drawings, designers John Najjar (later of Mustang fame) and Ken Spencer, a clay model specialist, began constructing models to find the right form and proportions. A surprising number of models were made. A 3/8 scale study model, a full scale clay model, and a full scale plaster model were all constructed. A clay interior buck was also constructed to work out details of the interior.

Finally in the Fall of 1954, the detailed plaster model of the Futura was shipped, along with plans and detail drawings, to the Carrozzeria Ghia studios in Italy, along with an experimental Continental Mark II chassis on which the constructed body was to be placed.

Schmidt and Najjar, knowing full well Ghia’s reputation of taking liberties with the implementation of plans, travelled to Italy to oversee the progress of the car’s fabrication. But there were few hiccups, and the process moved forward smoothly. Only the wheel wells had to be slightly modified.

The dramatic double-bubble canopy was constructed by Ford back in Dearborn with the help of master craftsmen working in Plexiglas. The completed canopy was then sent to Italy for Ghia to install on the car.

Ghia constructed the Futura in only three months, and soon the car was being shipped back to the United States, arriving in January just in time for the Chicago Auto Show. From there it would go to the Detroit Show, and then to New York in early March.

The car was very well received at every show. Crowds thronged to the vaguely menacing futurism of the car with its jet fighter canopies and tailfins. The strong horizontals drew the eye along its long flanks. At 5765mm, the car was extremely long for a coupé – even then – and its height at slightly less than 1500mm made it look even longer.

Inside the canopy, the cockpit featured aeroplane-style gauges, with a compass at the centre of the instrument panel. The speedometer was mounted at centre of the steering wheel – not an ideal location, but who cared how fast you were going?

Other instruments and controls were found behind roll-top desk style aluminium doors that, when closed, gave the instrument panel a clean, unadorned look. Between the seats there were more control switches, and a telephone between the seat backs.

Benson Ford met the Schmidt and his team in New York where they took the Futura for a ride through the streets and to Central Park. The air conditioner and venting system gave up during the journey, and even though it was still winter-cold in the Big Apple, the men sweltered in the cockpit, broiling in the sun.

But no matter, crowds gathered around the car and Ford basked in the glory of his new spaceship on wheels. The Futura would continue a very successful show circuit and appeared at exclusive gatherings all over the country. The car was so popular that Ford sent it out to tour the next year – and the next – and the next.

From Concept Car to Movie Star

After touring for four years, even the most enthusiastic fans of the car sensed its time was passing – a bit ironic, as production cars had finally caught up to its glaring mask and oversized tailfins. But Ford was already looking ahead. The La Galaxie concept of 1958, though heavy and ponderous, previewed some of Ford’s styling themes for the 1960s. The face of the La Galaxie was much friendlier, while the tailfins were integrated smoothly into the body.

As for the Futura, it made its way to Hollywood. George Barris, the ‘King of Kustoms’, would later claim it was his idea to bring the car out to Tinseltown to try its luck in television or film work. Either way, the car found work almost immediately, as an exotic prop in a movie called It Started With a Kiss, starring Glen Ford and Debbie Reynolds.

The Futura almost stole the show, much like the Mini Coopers in The Italian Job a decade later. Painted bright red (better for filming, it was claimed), the car played the part of a glamorous prize won by Glen Ford’s character. With plenty of screen time and a race against a classic Mercedes, there was plenty of flamboyant Futura goodness on screen.

As the film was released, the Futura went on the publicity circuit once again, and then MGM pictures returned the car to Ford, who let the car languish outside of Barris’ shop, along with the Mercury D-528 Concept. A few years baking in the California sun took its toll on the car and it looked like Futura would be on its way to the scrap heap.

From Back Lot to Bat Cave

Then in 1965, ABC Television came calling looking for a car for their upcoming Batman show. There was already a Batmobile in existence, built in 1963 by a young 23-year old Batman enthusiast, Forrest Robinson, who customised a 1956 Oldsmobile. Robinson’s car was located on the East Coast, where it made the promotional circuit with DC Comics. For whatever reason, ABC decided to try to find something more local to Hollywood and gave George Barris a call.

Barris knew just where to find the perfect Batmobile – in his back lot. He contacted Ford, who sold him the car for $1.00 and “other valuable consideration” (Barris was working for Ford on several other projects), and set to work transforming the Futura into the Batmobile.

The Batmobile became an instant icon of television and comic book culture, almost as big a star as the Caped Crusader himself. It was so popular that Barris created five copies, and there were others created by individual craftsmen over the years.

Barris cleverly retained the original for himself, leasing it to ABC and keeping it as a centrepiece in his private museum/showroom. He finally sold it in 2013 for $4.62 million dollars. Add in the original cost of fabrication ($2.174 million in today’s dollars) and the Futura becomes one of the most expensive cars in history.

The Futura in its original incarnation still has its followers, many of whom decry the Batman years as a desecration of its jet-age design purity. There have been replicas built from original plans.

It is a long way from Bill Schmidt’s fishing trip with Bill Mitchell back in 1952. The Futura’s long life, with numerous incarnations, makes for quite a fish tale in itself, one that quite a few people have had trouble believing over the years – a shark/jet/bat/crime fighter car? Come now…

But such is the nature of fish tales, and, occasionally, the lives of concept cars.

Sometimes a story is so strange, it’s true.