The development of the ‘personal luxury car’ produced some remarkable concepts

In 1960, General Motors found itself on top of the industrial world. It was the largest corporation with the greatest reach and broadest product line of any corporation in the world. It produced everything from home appliances to cars and trucks, to heavy industrial machinery and military vehicles. True to its name, if it had a motor, General Motors probably produced some version of it.

But times were changing at the opening of the new decade, and a new era was underway at GM. Harley Earl, the legendary design chief of more than three decades had retired at the end of 1958. Taking his place was his top lieutenant, William “Bill” Mitchell, another big man with an outsized personality and a taste for the dramatic. 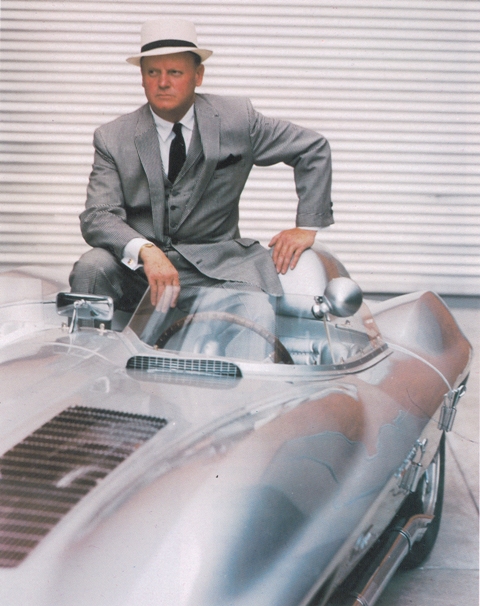 Mitchell was eager to imprint his design philosophy on all of GM design. Harley Earl had been fond of large forms with generous amounts of chrome and lots of ornamentation. Mitchell was fond of bold, but more tailored forms, without all the efflorescence of chrome and space age decorations. Even tailfins, a standard part of any Earl project of the last decade of his career, were reduced, then eliminated, in Mitchell’s early years. 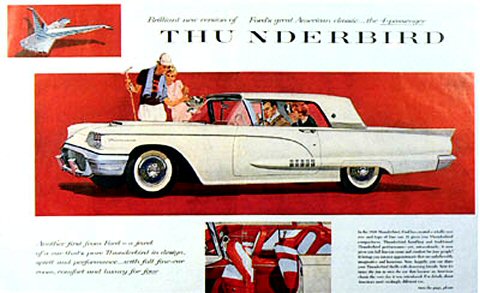 One project that needed undertaking immediately was an answer to the Ford Thunderbird. The Thunderbird had started its life as a sort-of competitor to the Corvette, but by 1958 had grown larger and added two more seats. The four-seat format turned out to be a stroke of marketing and product-planning genius and the Thunderbird was soon outselling the Corvette 24-to-1. 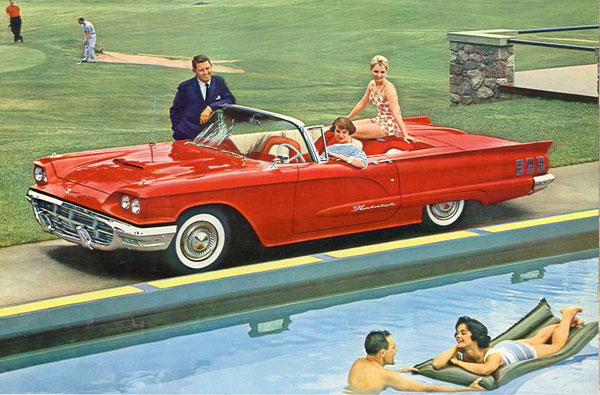 The Thunderbird was the first ‘Personal Luxury’ car, a format that would prove both popular and profitable over the next three decades. It is important to note the general characteristics of the format: it was always a four-seat coupé (with a few notable exceptions, like the disastrous four-door Thunderbird of the mid-1960s), with a large engine and glamorous exterior styling.

Internal components were off-the-shelf wherever possible – the cars would not have been profitable otherwise. Luxurious appointments were standard, but not in a number or quality that would threaten more upmarket sister brands like Cadillac or Lincoln. The overall character of a personal luxury car was one of glamour, not performance; it was a car to be seen in, not a street racer. 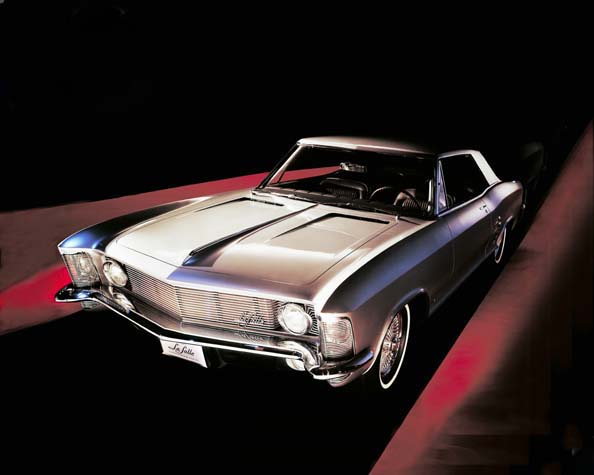 GM, though still leading in overall sales, needed an equal to the Thunderbird. Mitchell’s team, after numerous prototypes, began project XP715 and developed a four-seat coupé, with sharp-edged styling that was initially planned as part of a revived LaSalle brand. LaSalle had been a ‘junior Cadillac’ that was part of GM’s lineup from 1927 to 1940, and was still fondly remembered by many of the motoring public. Mitchell was a strong proponent of the LaSalle idea, but GM management was cool to it and the project was offered to each division in an internal competition.

For those divisions interested (Cadillac and Chevrolet passed), a prospectus had to be drawn up and presented to management, outlining how they would build and market the car. The winner was Buick, a division that was hurting in sales and needed a hit. The XP715 was then developed into a production form and became the 1963 Riviera, an instant classic that would ultimately become Mitchell’s favorite design. 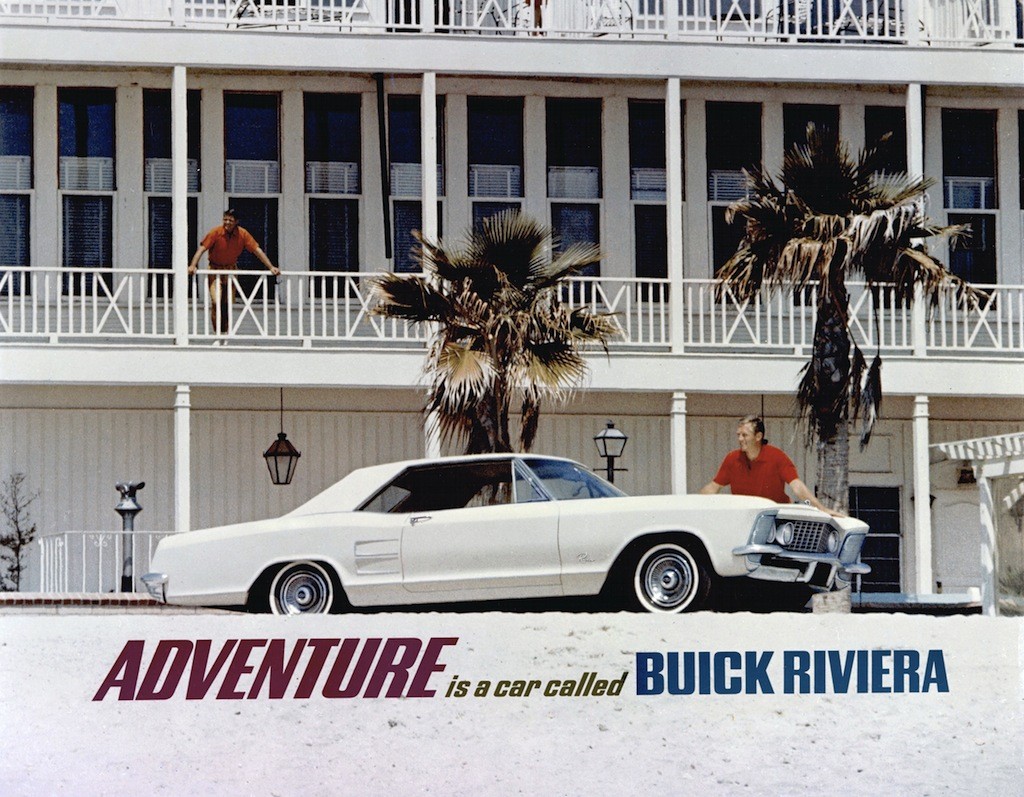 Mitchell and his team weren’t done, however. The Thunderbird, the Riviera and Studebaker’s Avanti, also released in 1963, had proven that a personal luxury car was a viable and profitable format. Cadillac, jealously observing the success of the Riviera, wanted a more “personal” Cadillac, so designers from the Cadillac and GM advanced studios were commissioned to bring a luxury coupé design forward for consideration. 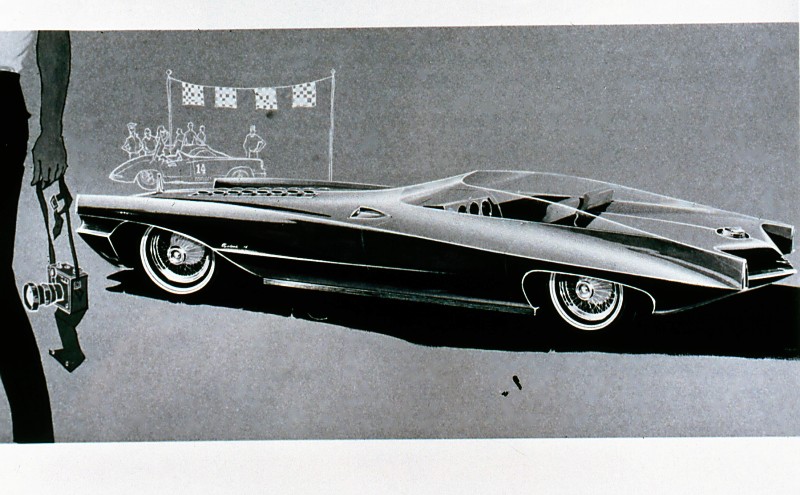 Thus began a remarkable period of design exploration that would last for some six years and produce many remarkable concepts. Cadillac demanded that their coupé not be a revised Riviera – the division had already passed on that concept. It needed something bigger and bolder. Enter the element that was planned to be the game changer: the V16 engine.

GM already had a V12 and had planned a prototype V16, built from two V8 engines merged together. No other car in production would have it. It would be an unparalleled personal luxury statement, recalling the classic Cadillac Sixteen of the 1930s.

At first, the designs riffed on existing Cadillac styling motifs. A fastback design from 1961 showed future Cadillac front-end details, a cartoonishly long hood to shelter that V16 and vestigial tailfins at the rear. Its most notable feature beside the hood was the fastback body shape – a crisp, more tailored version of the Cadillac fastbacks of the 1940s.

By 1963, the designers were hitting their stride with better proportions and more elegant massing. The proposal shown here (in 3/8 scale) has a long, massive, but clean look with a certain menacing, supervillain-like presence. In this scheme the V16 projects the long nose, but is counterbalanced by the enormous cockpit, which has a large lifting canopy like a fighter plane. 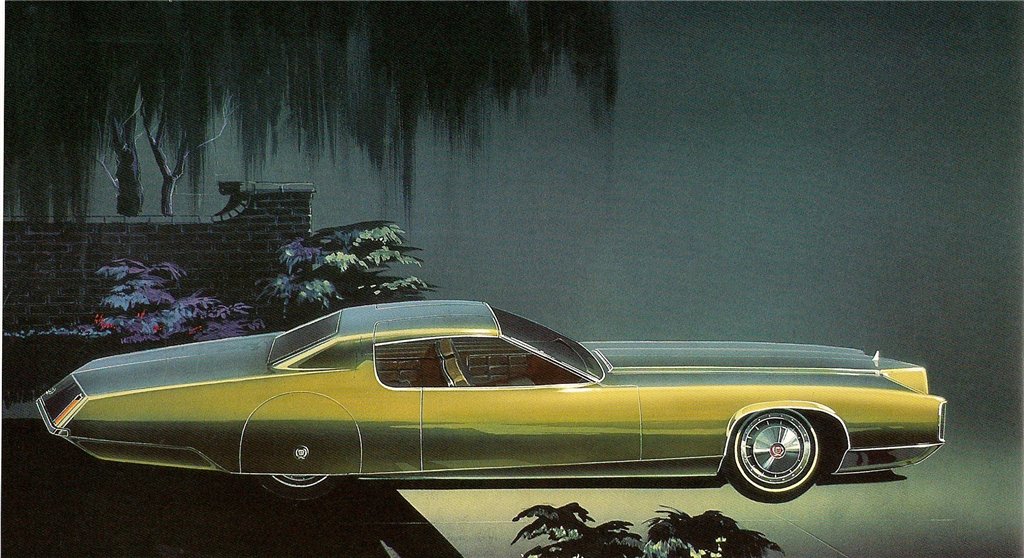 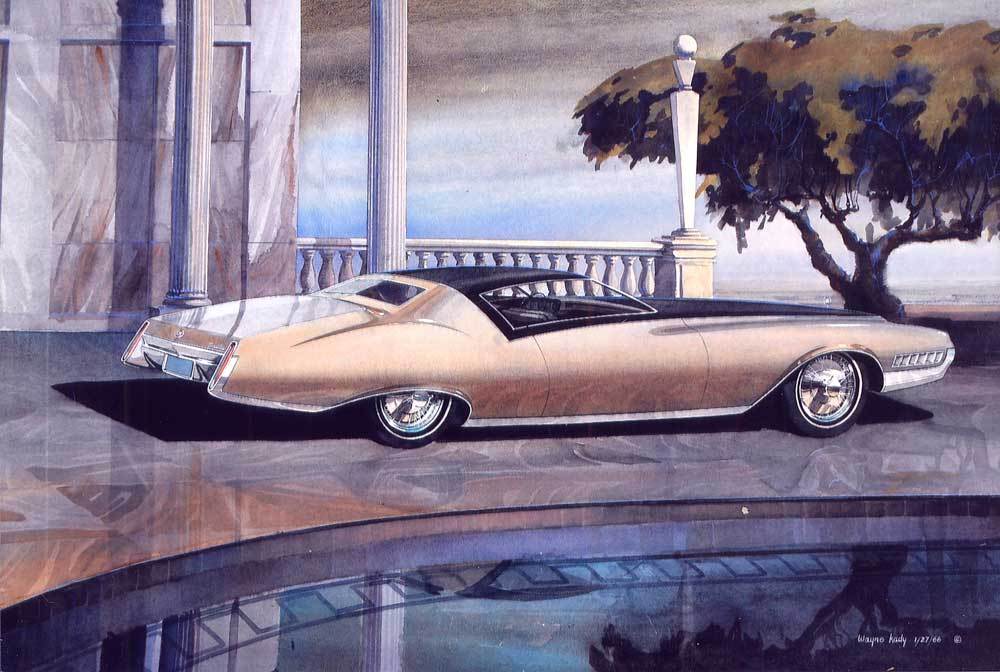 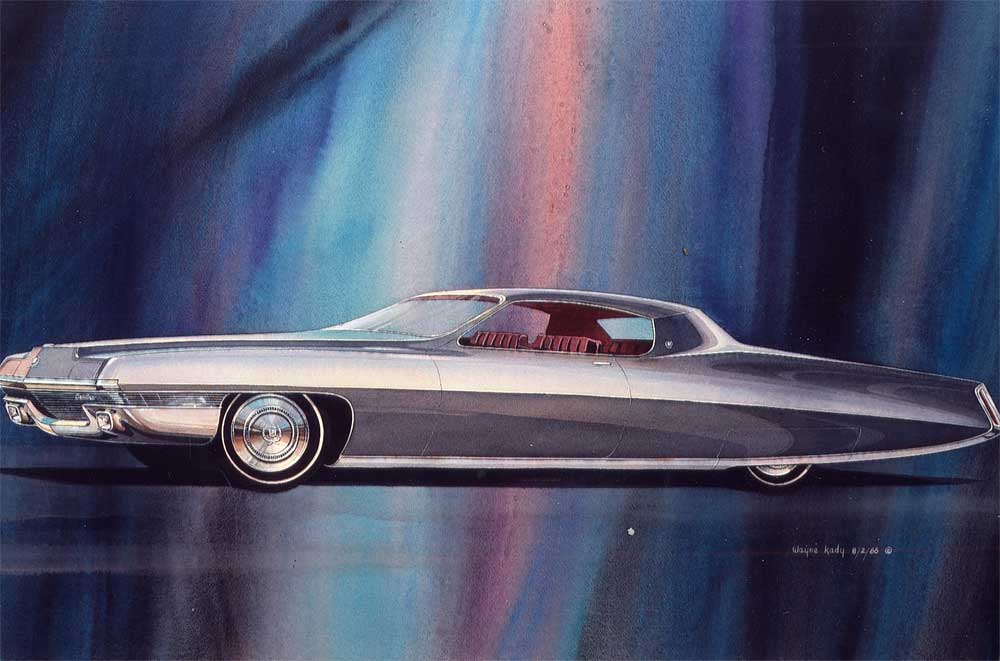 Those years produced some remarkable renderings too. Wayne Kady, a Cadillac designer, produced some particularly strong watercolor renderings of his designs. Besides illustrating the glamourous persona of the designs, the renderings show the exploration of form and proportion, given that the long nose was a fixed point in the composition. Both short and long rear decks are proposed, as well as fast- and notch-back tails. Classic details like bustlebacks and long sweeping lines – elements of cars from the 1920s and 1930s – were much in evidence in these designs, to the delight of Mitchell, who wanted to recapture some of the glamour of the jazz era and project it forward into a new generation of luxury automobiles. 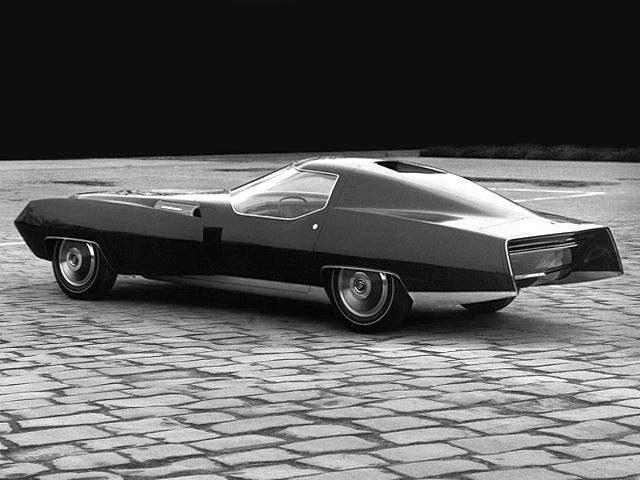 Finally, GM would wrap up the project with a full-scale mock up of a V16 personal luxury car, the XP840. Many of the design elements shown in the renderings of Kady and others were on display here. The fenders were muscular pontoons, while the front mask was strongly undercut and bisected by an angular prow. The windscreen was also V-shaped like the nose. The roof was a fastback with a tiny rear window. It was assumed that cameras would be used for side and rear viewing. The rear fascia was also undercut, reinforcing the ‘bladed surfaces’ aesthetic around the car. 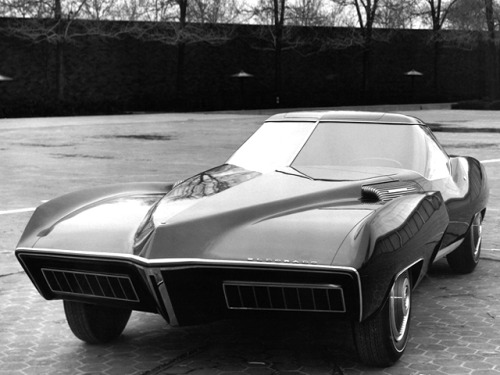 The XP840 was the high point for the V16 coupé programme – and sadly, the end, as GM management would decide to pass on the V16 and use a traditional V8 instead. The renderings and models would go into storage, but enthusiasts of GM cars of the period can see design motifs that reappeared in Buicks, Pontiacs, and Oldsmobiles of the late 1960s and ‘70s. 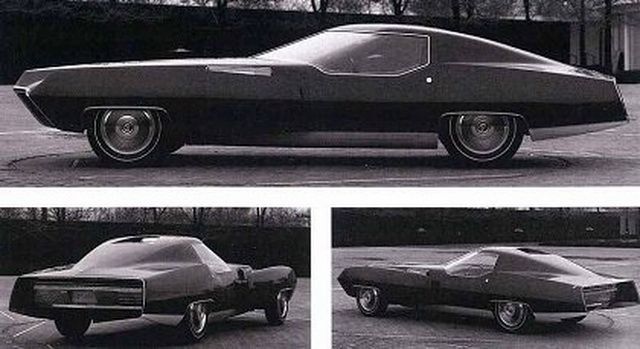 Looking back on the project, Chuck Jordan would recall, “It was a two-passenger Cad with 16 cylinders all right, but it was done just to make a statement about the heritage of Cadillac and where we were going with the image.

“We built several scale models and one full-size clay. The concept of all was invariably the same: a long-hooded car to contain the long engine. These designs were exaggerated, almost cartoon-like, but exciting to work on. This was one of our pet advanced projects at the time.

“We finally dropped the project after the full-sized model was completed. We had a lot of other things to do, and here we were playing with a full-size clay we never intended to expose. It was strictly a styling exercise.”

Pivot to the E-Body 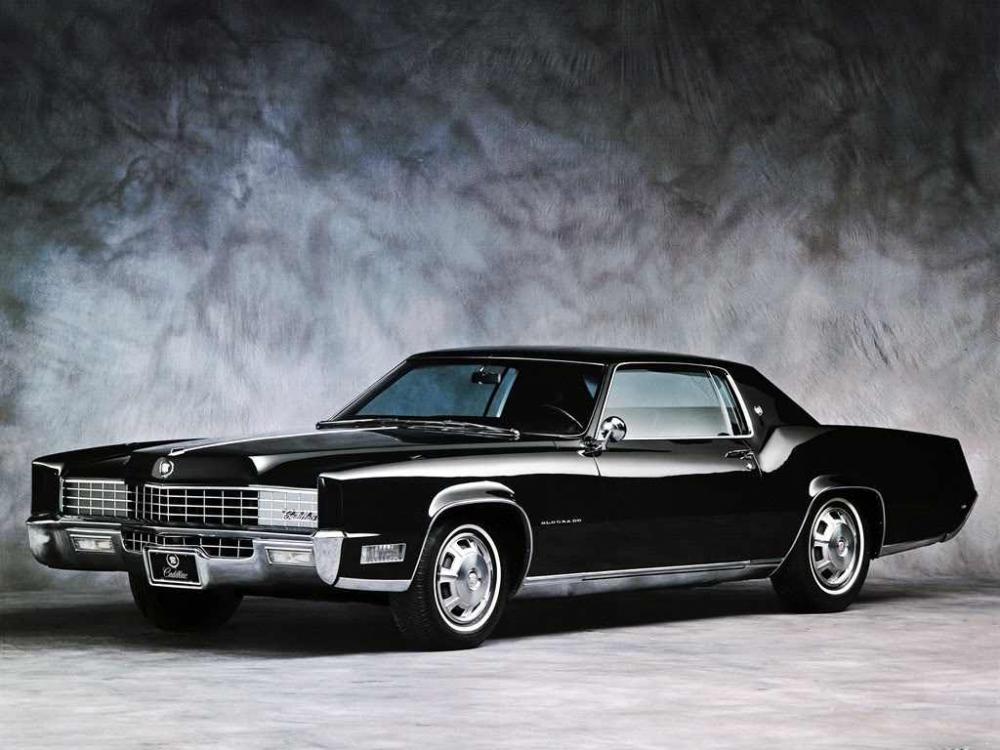 While most of the concept studies noted above were done in the Special Projects studios, the Cadillac and Oldsmobile studios continued to work on personal luxury car projects. Cadillac had early Eldorado models completed by 1963. Oldsmobile had prototypes a few months ahead of Cadillac. Both cars would use the GM ‘E-Body’ platform first introduced by Buick on the Riviera. Both cars would use Oldsmobile’s front-wheel drive system known as the ‘Unified Power Package’, a unique engine/transmission package that had been in development since the 1950s.

Styling work from these studios shows an evolution towards a production car – no flights of fancy here – but interesting design cues trickled over from the special projects studio. The Toronado in particular looks like a smaller, less evil version of the 1963 V16 proposal, while the Eldorado carries a good many of Wayne Kady’s design motifs from his renderings. 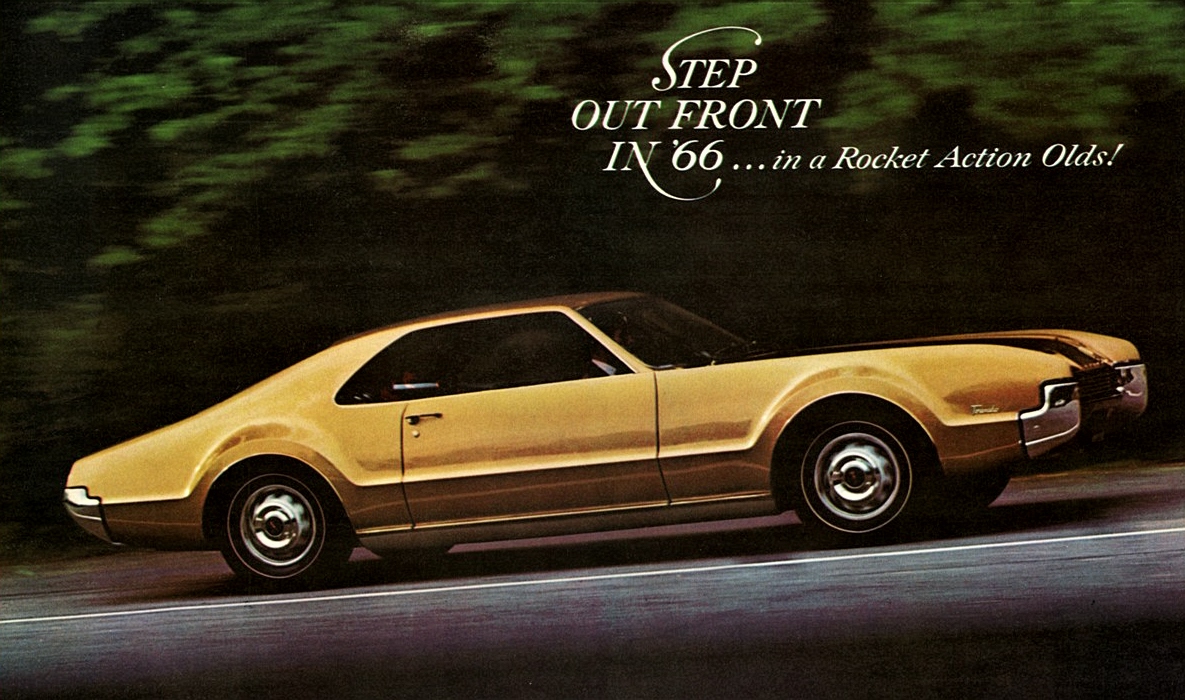 The Toronado was introduced to wide acclaim as an innovative luxury design that is among the most radical production cars ever produced in the U.S. Meanwhile the Eldorado, like Riviera before it, was an instant classic. 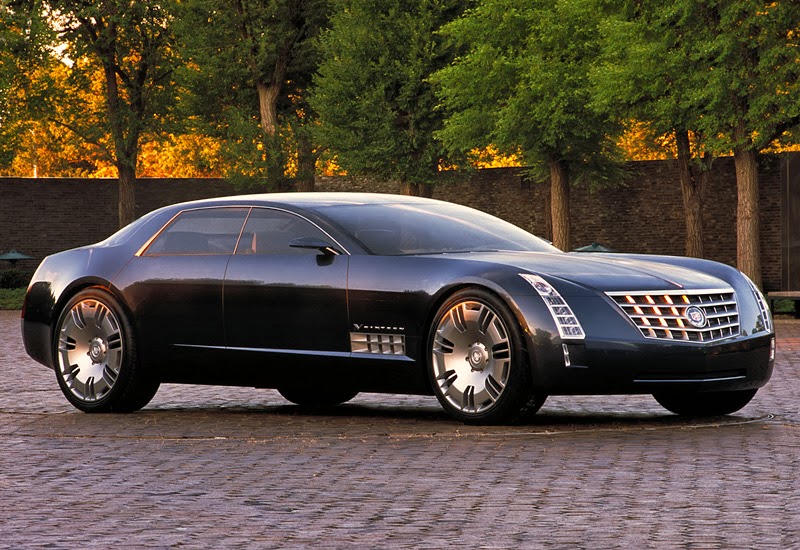 As for the V16, it seemed it was gone forever, but in 2003 GM created the Sixteen concept under the leadership of “Maximum” Bob Lutz. Unlike the 1960s concepts, this was a fully functional car powered by a massive 1000-horsepower, 13.6-litre aluminium V16 engine. There was much hope for a limited production run, a halo car for the marque, but it was not to be.

Read the story of that car next week…