American Motors Corporation was an also-ran to the Detroit Big Three – not in their league or ever even close – but it stayed in business from 1954 to 1987,  producing solid small and medium-sized cars of occasional brilliance thanks to the design expertise of its styling director Richard Teague. AMC was always at the edge of a big breakthrough in the market but never quite got there. 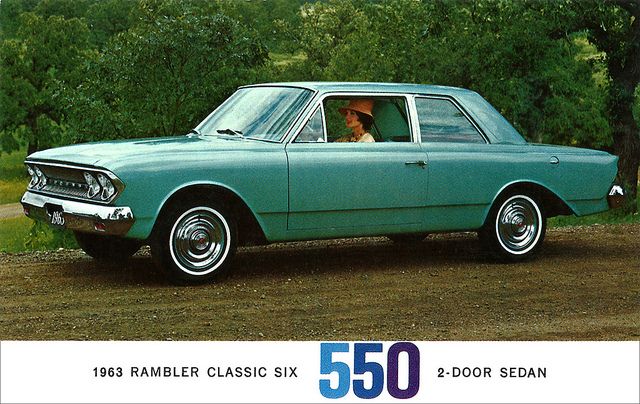 The AMC Rambler – Plain, but solid and reliable, it was the bedrock of AMC’s business model

Finances were always tight, even in good years. AMC projects proceeded forward with just a fraction of the funding that the Big Three could afford. By the oil crisis-plagued 1970s, the stress was beginning to show. At first AMC was well placed in those years, as their stable of small cars seemed ready to meet hard times and thinner pocketbooks. But the Big Three soon caught up and could outsell AMC even in its most cherished market segments. 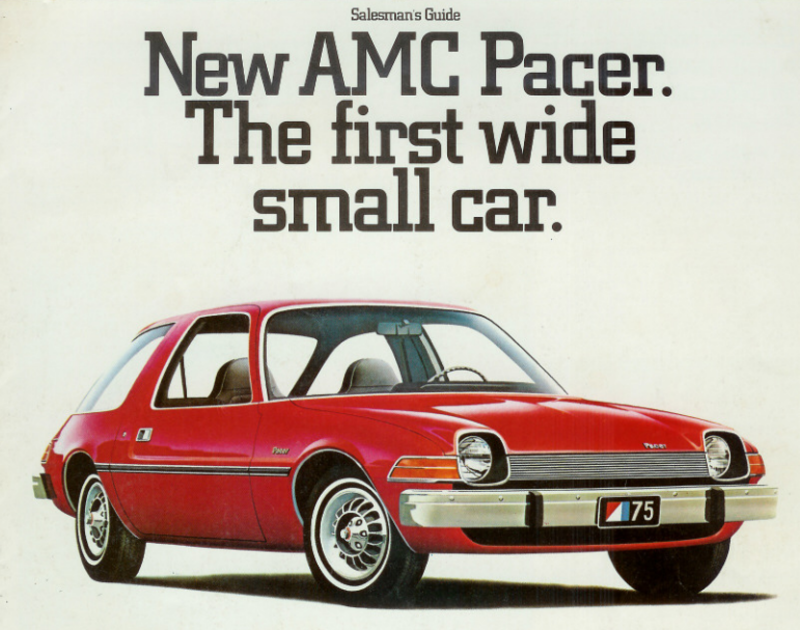 The AMC Pacer – now an automotive punchline, but quite an innovator in its day

By 1977 AMC was in real trouble. Their car sales were down, and only the Jeep and AM General heavy truck divisions were keeping the company afloat. Alarmed, CEO Roy Chapin called Teague and his staff together and devised a plan for a special show that would project a near-future line-up of cars to express AMC’s talent and vision for the 1980s, in the hope that this display of AMC design virtuosity might drum up support from investors. It was to be called the Concept 80 show.

Here’s a short news clip of the Concept 80 show – the ’70s dress and décor is a priceless bonus.

The Concept 80 show was to travel to seven North American cities: Atlanta, Los Angeles, San Francisco, Toronto, Detroit, New York, and Chicago. The events were invitation-only, to select dignitaries and the press. The general public – the intended customers of the concept vehicles on display – were not invited. This was a fundraising tour, and the hope was that the invited press would spread the word among the customer base.

Once inside the show, attendees would hear an introductory speech by Roy Chapin, then CEO of the company. In his introductory remarks he would outline the future for the automobile – increasing urbanization, longer commutes, and permanent energy shortages with accompanying high petrol prices. Small cars, he claimed, would rule the automotive landscape in the 1980s, and AMC was prepared to meet the challenge. Then he would introduce the concepts. Attendees would meet six vehicles: two small commuter compacts, a small Jeep, an upscale compact coupe, a small van, and a tiny electric car. 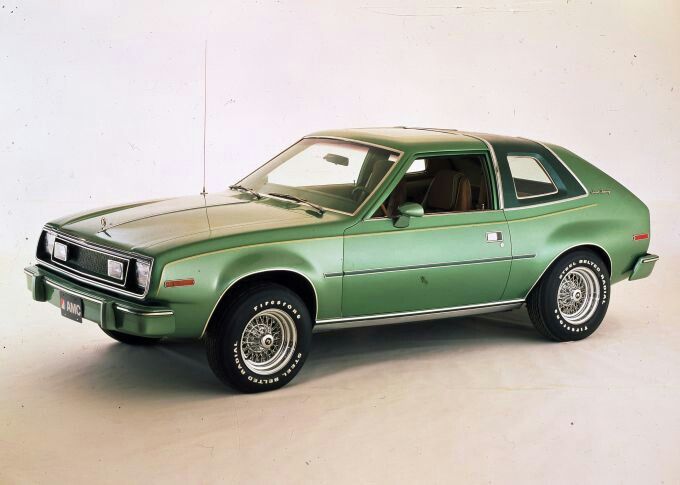 Concept Tourer Coupé – a reworked Hornet concept that fooled no one. Nice wheels, though

The two commuter compacts were restyled Gremlin cars, and were so bland as to be instantly forgettable. The Concept Tourer Coupé was a reworked Hornet concept from a few years earlier. It had received a new paint job and interior and an unfortunate vinyl roof. Its only redeeming feature seemed to be the custom wire wheels, which were probably worth more than the rest of the car. 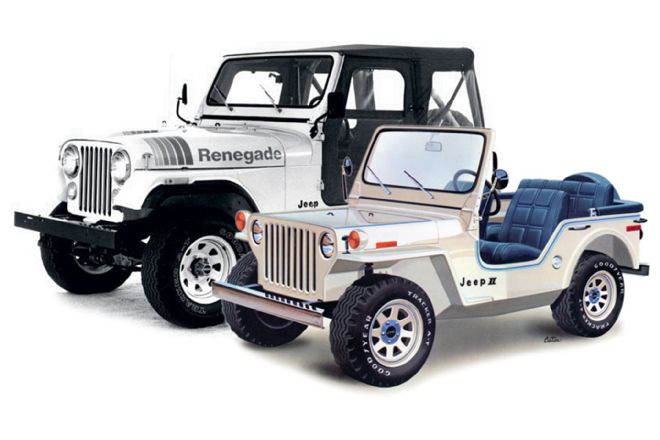 The Jeep II concept – tiny when compared with its production brother. The most unpopular vehicle at the show. (Rendering: FourWheeler.com)

The small Jeep presented was by far the most negatively received. As the rendering above shows, it was fraction of the size of a regular Jeep CJ (now Wrangler). It looked like a resort car- a sort of FIAT Jolly designed in Toledo ( Ohio) rather than in Torino. It was too toy-like for Jeep purists, and the press. Even before the tour was over, it was known that the Concept 80 show would be this concept’s first and last stop. 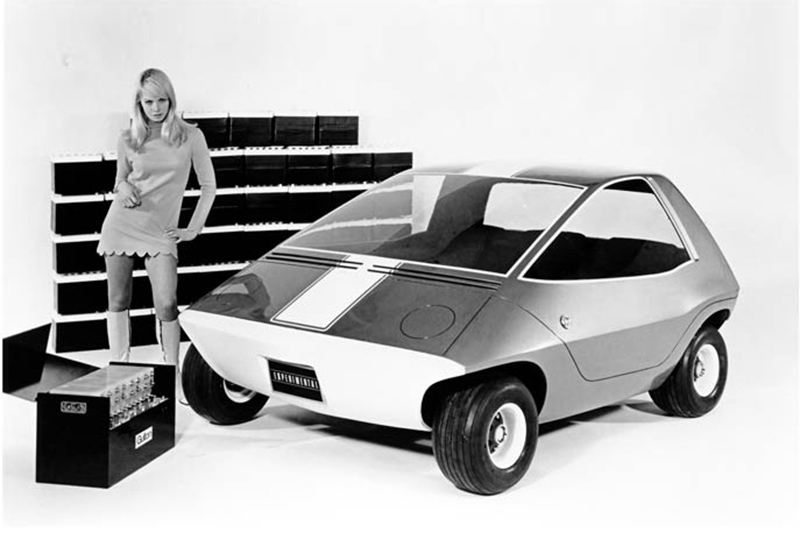 The cute little electric, called the Electron, looked strangely familiar, and sharp–eyed journalists with good memories and decent filing systems were quick to expose it as a repainted AMC Amitron concept from 1967. When introduced, the Amitron drew a great deal of attention for its diminutive size – just over two metres long and almost as wide – and its interesting electric powertrain. It had an impressive 150-mile range, and employed the first regenerative braking system. The tiny car could seat three abreast under its canopy-like roof. There were no traditional doors. It was the perfect city runabout. 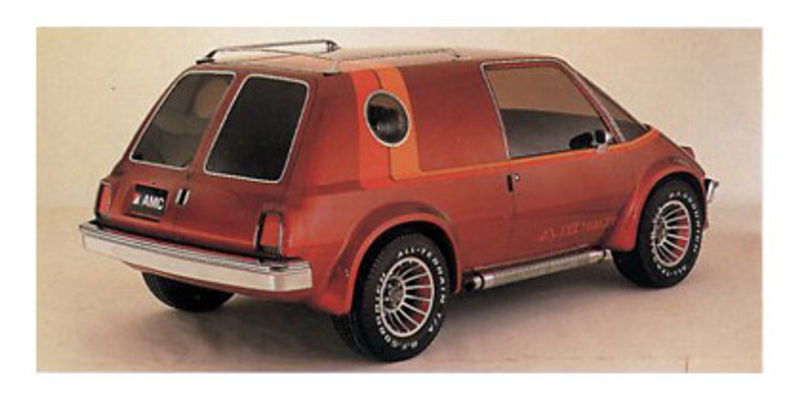 The AM Van perfectly captured the spirit of the times

And finally the most memorable concept of the show, the AM Van. It was a small monospace concept that looked like an AMC Pacer that had morphed into a van. The van craze of the 1970s was hitting its peak at the time, and idea of a van that could embody the hedonistic fun of van culture without being a noxious petrol hog was very appealing indeed. 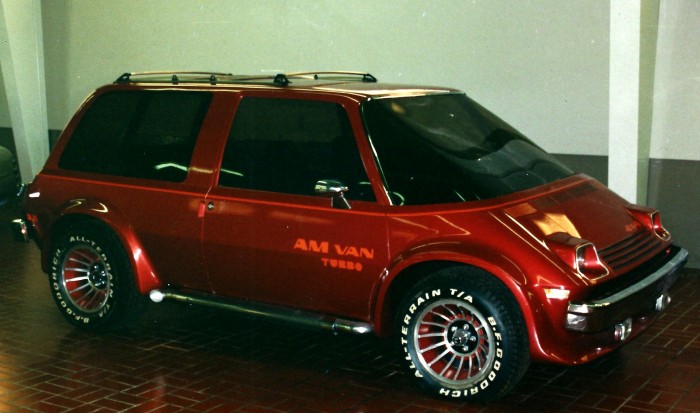 The AM Van was a squat Pacer-like monospace that sat three or six people depending on the configuration. As shown at the Concept 80 show it had an incomplete but suggested interior for three plus a cargo area in the back.

True to the times, it had porthole windows in the rear and strong graphic element overlaid on its red paint. The whole ensemble sat, of course, on mag wheels and wide tires, the better to fit in with the van crowd. 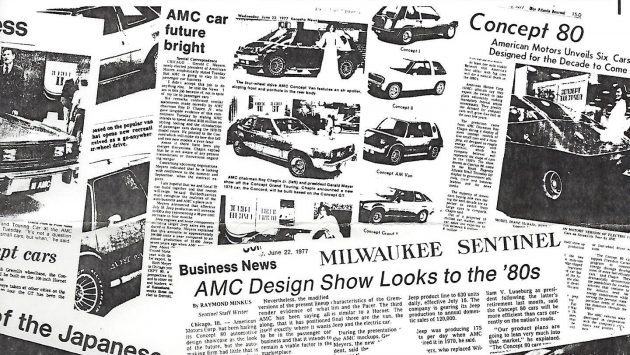 As the Concept 80 show toured the country, it did achieve its goal of raising the profile of American Motors. The AM Van in particular got a lot of press, and there were talks of bringing the concept to production.

But it was not to be. The show concluded its tour without finding the ‘angel’ investor necessary to keep operations going. That angel would eventually come in the form of Renault, who entered into an unfortunate alliance with American Motors which brought both parties to grief in the 1980s, despite some good cars.

It would take the newly resurgent Chrysler, under the leadership of Lee Iacocca, to bring about a new era for the company, but it would mean the end of American Motors as a brand. Then, as now, it was Jeep that was the valuable part of the company. The rest was just extra baggage that went along with the prize. 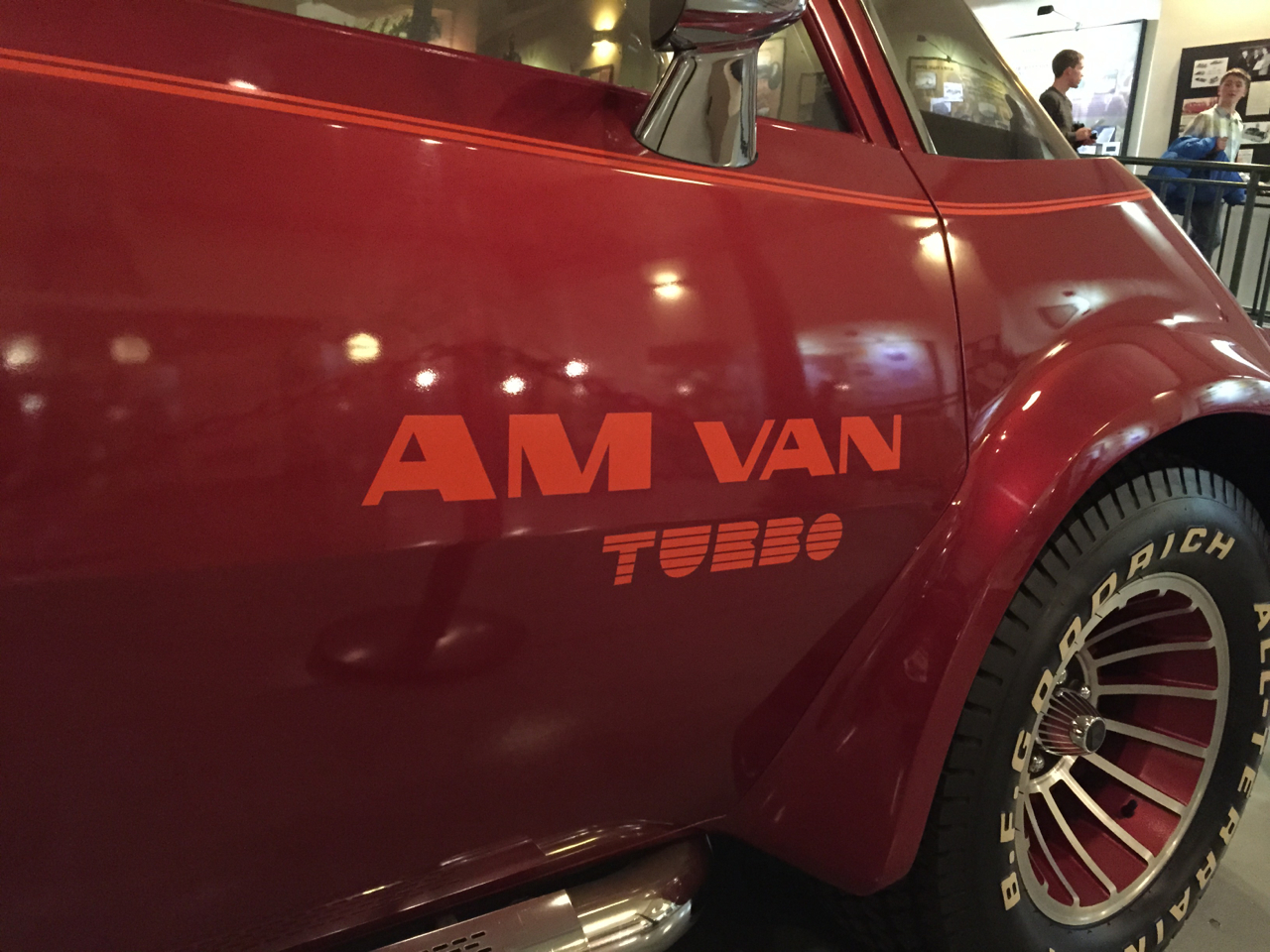 Don’t be fooled. The Am Van was neither turbocharged nor four-wheel drive. It was a fibreglass model. The wheels don’t even roll

Looking back from four decades distant, one has to admire AMC for their vision of a more efficient and appropriately-sized automotive fleet. Most who visited the show, especially the press, saw straight through to the dog-and-pony nature of the affair, but like the rest of American Motors’ efforts there was something homespun, courageous and even a tiny bit futuristic in the Concept 80 cars. And to produce an entire potential line-up of concept cars was almost unheard of. Not since the glory days of GM’s Motoramas had such a complete vision of the future been introduced.

It would be nice to see a similar show organized today by a manufacturer or even a group of manufacturers. Maybe Concept 30? 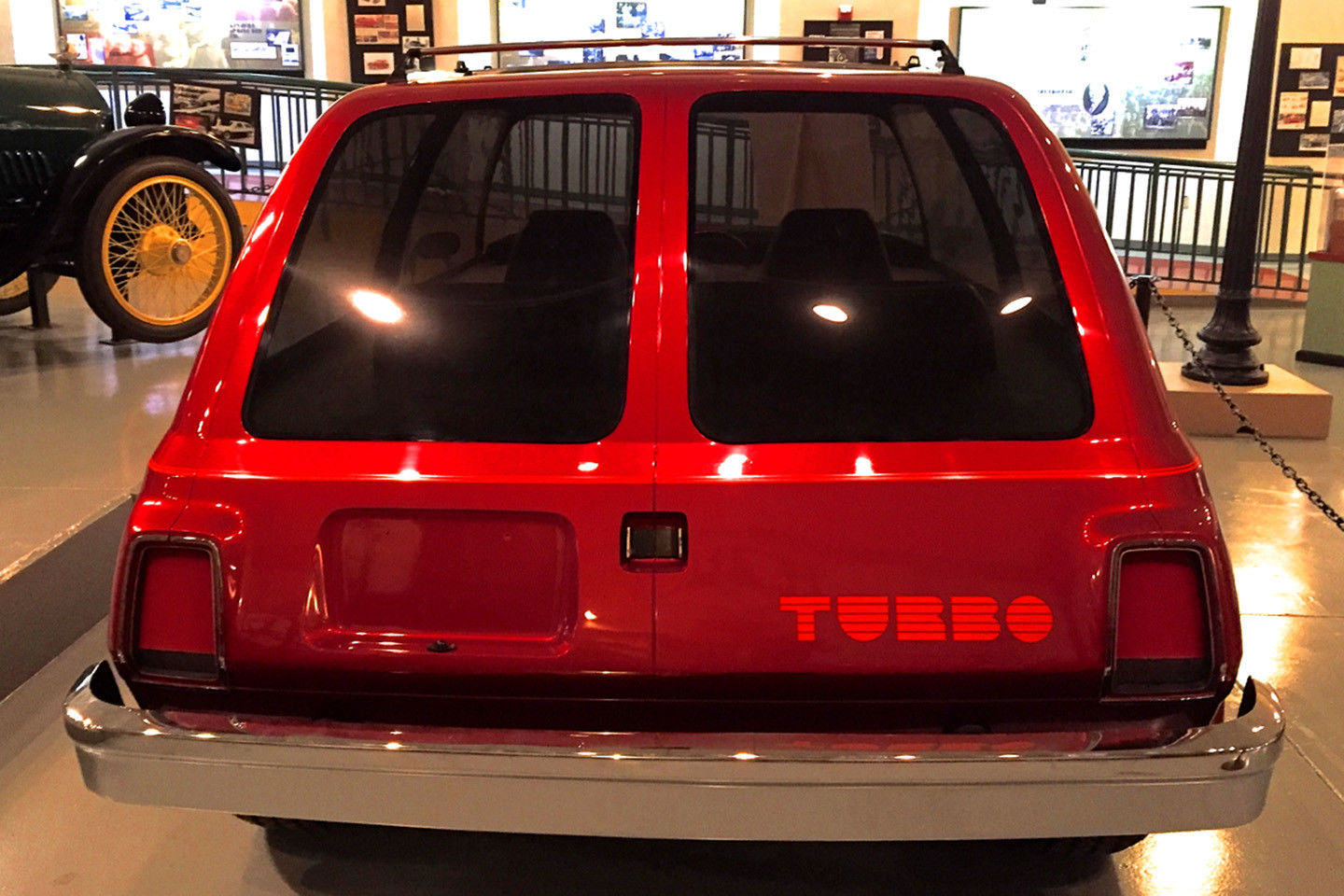 BONUS: Some lunchtime viewing, a fun documentary about the AMC Pacer ( 25 minutes)