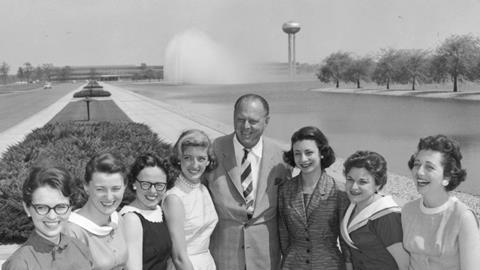 Last weekend, the ‘Eyes on Design’ weekend included a special emphasis on women in design.  This week, our Concept Car of the Week recalls Harley Earl’s program to integrate women into the automotive design process, and showcases one of the concept cars that was produced from that programme.

In 1955, General Motors sent a recruiter to Pratt Institute in New York to hand-select a special group of designers for an initiative that Harley Earl, Vice President of Design, wished to advance. The designers were all women, nine in total. Six would go to various GM vehicle divisions, and three would go to GM’s appliance division, Frigidaire – back then a plum assignment in itself.

Earl had drawn on GM research that indicated that seven in ten cars purchased had the input, and even the deciding vote, by a woman. Families were increasingly buying a second car, and women were often the drivers. Earl predicted an increasing role for women in the marketing, design, and engineering of cars, and wanted to be at the forefront of a trend. 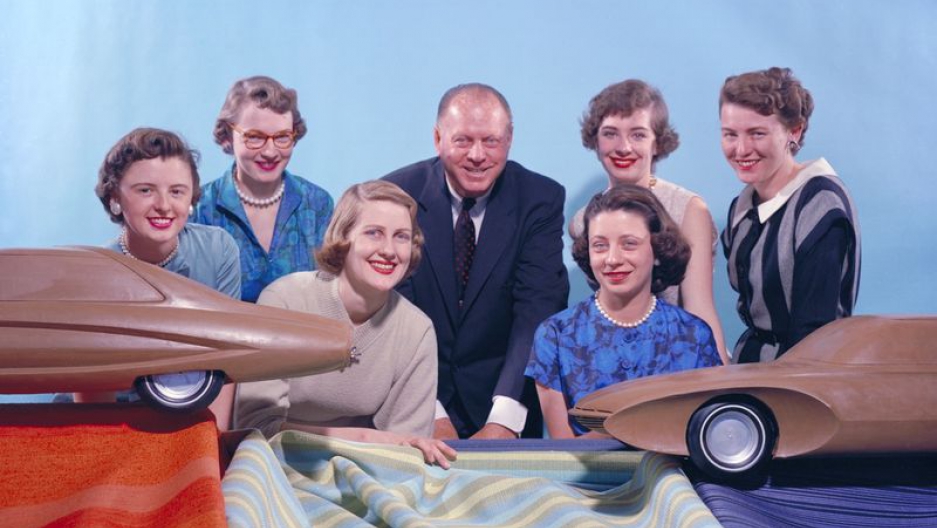 Harley Earl and his ‘Damsels in Design’. Ruth Glennie is second from the left

The group of women selected from Pratt had interesting backgrounds. All had some fine art and industrial design training, and a few had worked for manufacturers in other fields. But most had never worked in an automotive design setting of any kind, and some did not even own a car. Others had never travelled beyond the East Coast.

One designer, Jeanette Linder, was newly married to another recently-hired designer, Peter Linder. In an interesting role reversal Peter would go to Frigidaire to design refrigerators and Jeannette, who could not even drive, went to Chevrolet. The couple was featured in Look magazine, unpacking boxes in their tiny apartment and preparing to go to work at GM. 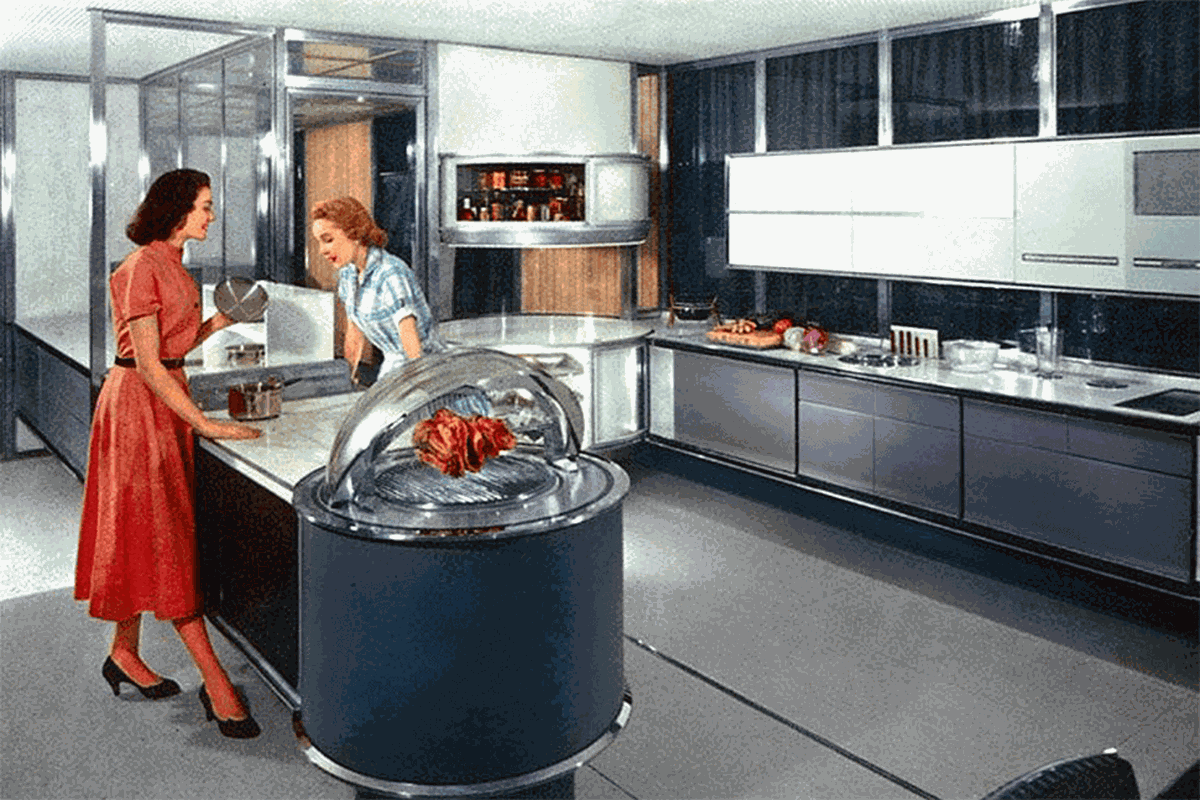 The GM Kitchen of the Future – some of the Damsels were assigned to Frigidaire, a coveted assignment at the time

But the designer of this week’s concept car was Ruth Glennie, a Pratt graduate who had had a fine art and industrial design and drafting background, having worked for a lighting manufacturer in Massachusetts.

She, like many of the single designers, were a bit hesitant to go all the way to distant Detroit but the GM opportunity seemed too good to pass up so the women moved to Michigan, most rooming and eating together, at least initially. 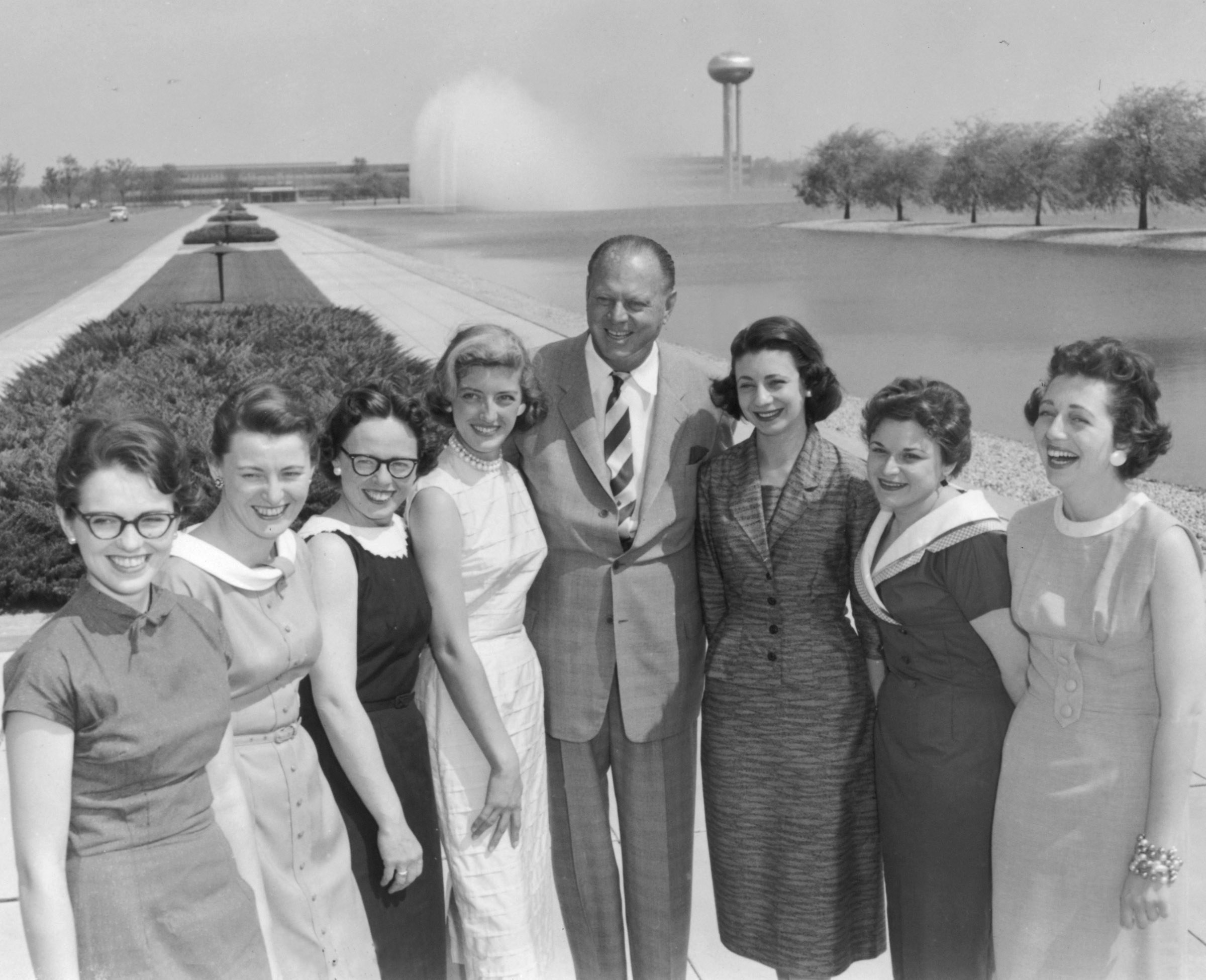 The GM Technical Center, the ‘Damsels’ and their benefactor, Harley Earl

The women were treated as curiosities in the studios, but generally (though not always) with respect. Still, Earl called them his ‘Damsels in Design’, a term which rankled the group, who wanted to be treated as equal members of the extensive team of studio designers.

Much of the work of the team was, predictably, on interiors of various GM cars. None were assigned exterior design roles. But their work went far beyond fabric selection and color swatches. Many worked on advanced projects, including secret research into technologies and interior improvements, including safety innovations that would become an important part of automotive design in the following decades. 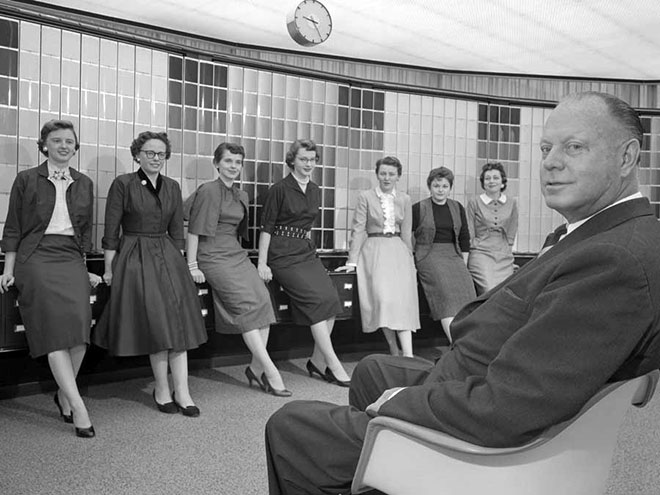 Harley Earl and the ‘Damsels’ in the Color Styling Studio at GM Technical Center. The round structure is still there, and still functioning as the colour studio

Of course, GM publicised the more mundane ‘interior decor’ chores. They were easily photographed and consumed by the popular press and made for good publicity. Harley Earl took every opportunity to insert himself into these photo-ops; he loved posing with his ‘Damsels in Design’ and clearly enjoyed being their benefactor.

And despite Earl’s well-deserved reputation as a ladies’ man, he was respectful of his design team. Suzanne Vanderbilt, one of the Damsels, later recalled: “Harley Earl… was a gentleman, in spite of stories that you hear. He was always a gentleman with the women. More a father figure, maybe, than boss, and commanded – as I said before – a great deal of respect.”

In 1958, a year that that saw GM take a break from the Motorama circuit, Earl decided to hold a ‘Feminine Show’ of the design talents of his Damsels. It would be an internal show for GM executives and company representatives from all over the country. The show would be held in the General Motors Styling Dome on the Warren, Michigan campus, and thus would be an opportunity to show off GM’s Technical Center and some fresh design talent to a wider GM audience. 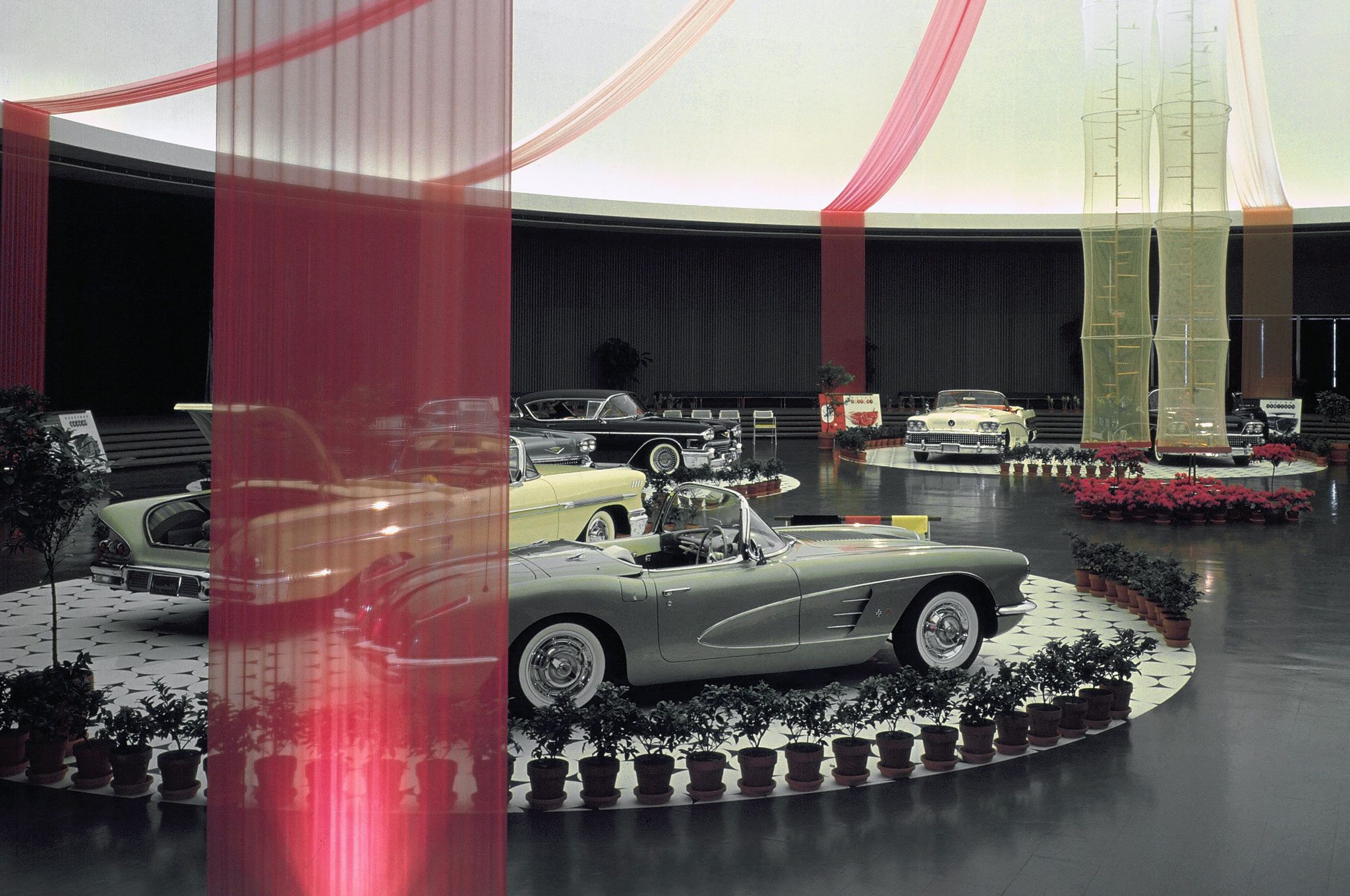 The GM Styling Dome as exhibit space for the ‘Feminine Show’

The Damsels were given at least one car each to redesign – 10 in total. Much of the work shown was colour and trim selection, but each one included some interesting technical innovations. All were shown in the Dome, which had been decorated by Damsel Gere Kavanaugh with great fabric streamers and circular display areas ringed by potted flowers and trees. In the center of the Dome three full-height fabric cylinders were filled with a hundred chirping parakeets. 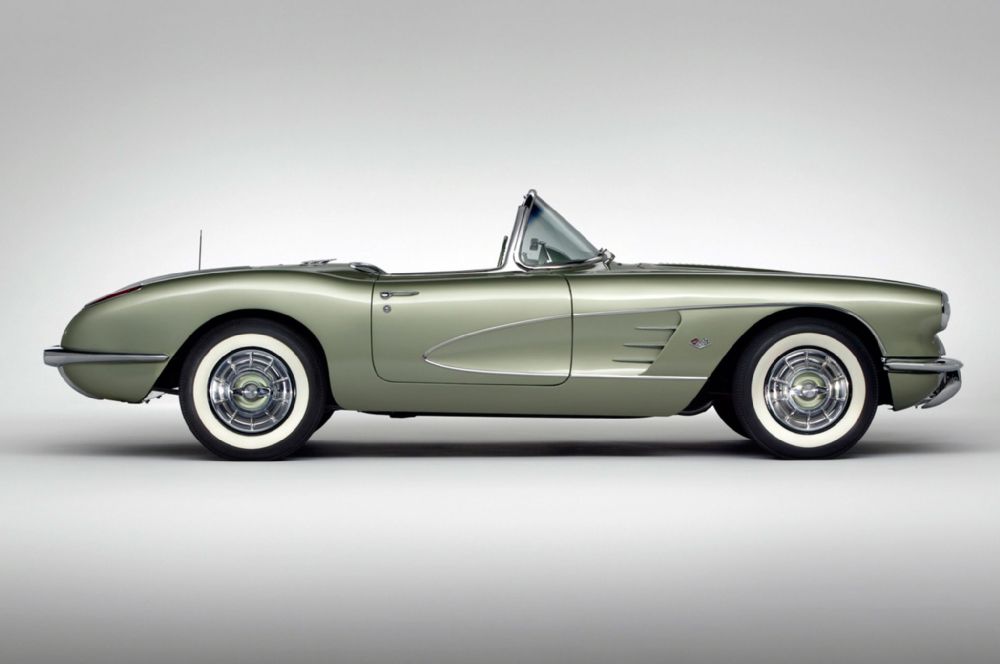 The Fancy Free was a standard Corvette with subtle, but significant, improvements

Ruth Glennie was assigned a Corvette to customise. Without some context, this might now be seen as the plum assignment of the whole group. But GM, along with other manufacturers, had signed a pledge to limit horsepower and to stay out of sponsored racing activities, so the Corvette program was on life support. Some at GM were in favor of retiring the car from the market. Still, Earl wanted to see what she could do with the sports car. 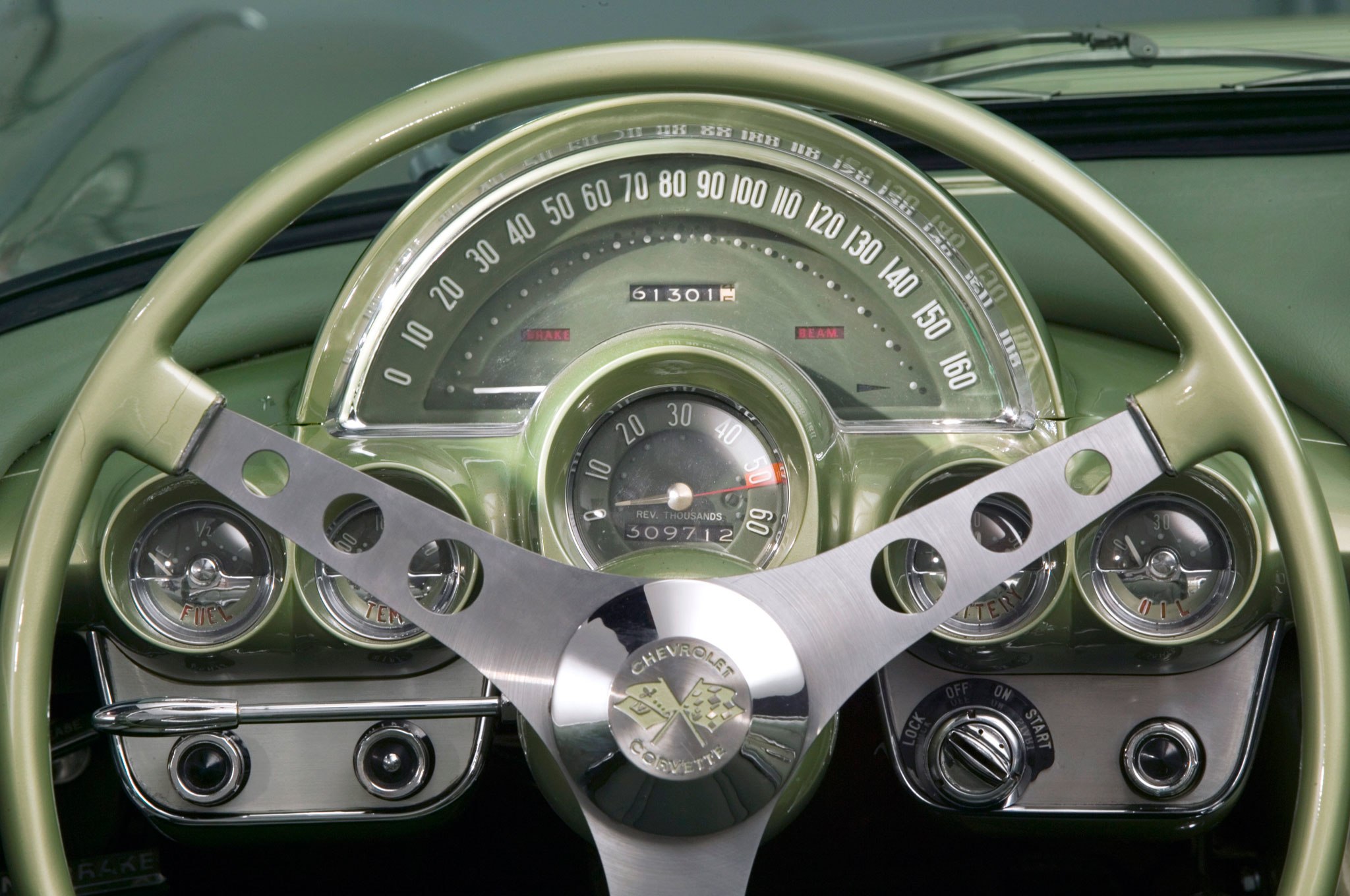 The silver-olive colour scheme extended even to the instruments, which were painted brushed aluminum with phosphorescent numerals and pointers

Glennie’s design kept the standard Corvette form (the women were generally forbidden to redesign anything on the exterior), but painted it in a single tone, a silver-olive color. Just the mention of silver-olive as a color recalls some of the worst abuses of color design in the 1950s, like coral and anthracite. But actually the silver-olive color worked very well. Its metallic sheen looked rather golden in the sunlight, and on cloudy days it seemed to be a soft silver, which complemented the chrome. The olive tint seemed to give the silver some interesting depth and helped subtly define the form of the car. But there is no denying it was still a product of its time. 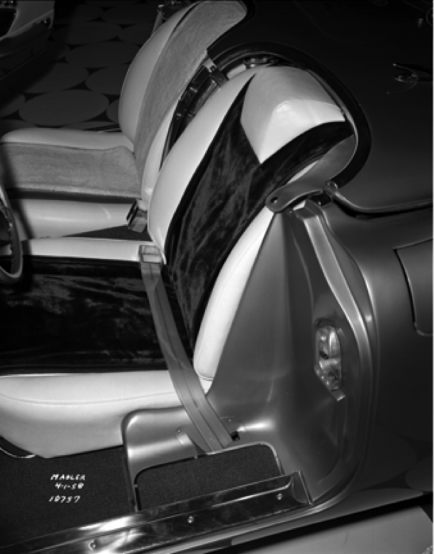 The interior had a different seat cover for each season. Here the black was winter and the light (yellow, actually) was summer

Glennie thought the Corvette might be a car one could customise for each season, and so she designed a set of three seat covers for each season that covered the standard olive-coloured leather.

Seat belts, a hotly-debated issue at the time, were installed in Glennie’s Corvette, and, in an industry first, were retractable. When the doors were opened a flashing light blinked where a reflector might normally be placed. 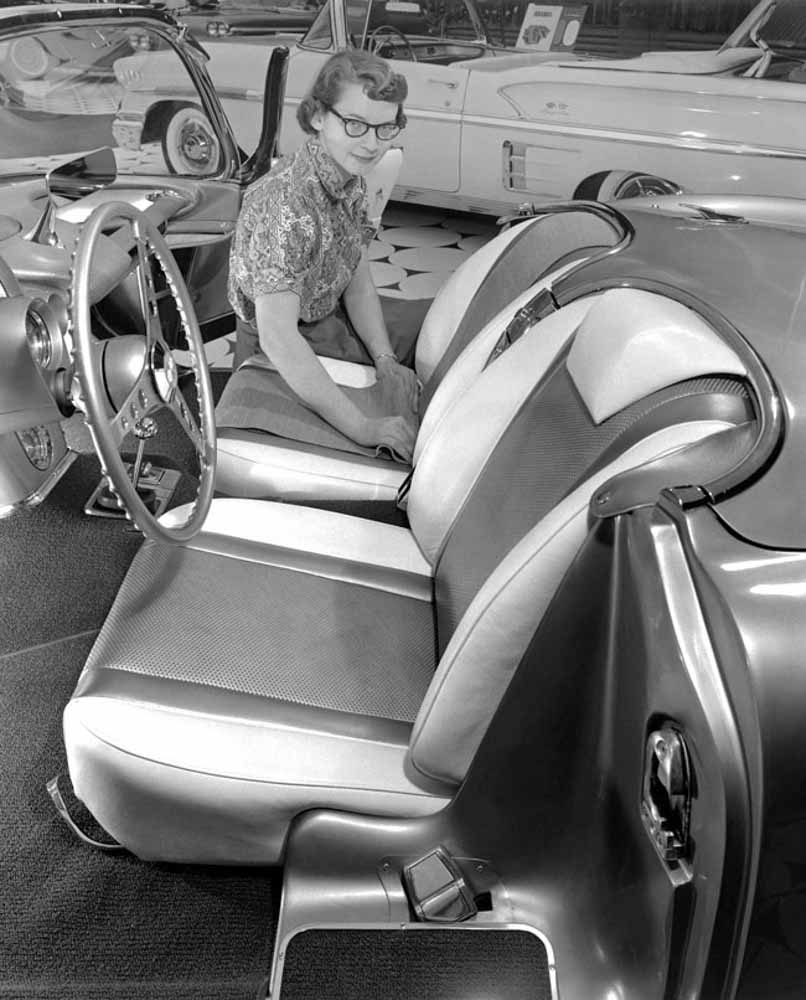 Glennie fitting a seat cover (autumn – orange tweed) to the passenger seat of the Fancy Free. Note the retractable seat belt at the bottom of the photo

Glennie’s Corvette, a convertible, was named the ‘Fancy Free’, a name meant to evoke the freedom and joie de vivre of leisure travel (and to deflect attention from GM’s secret desires for high-powered Corvette racers). It was the smallest and sportiest car in the show, and held its own against larger Chevrolets, Pontiacs, Buicks and others. To make things even more interesting Earl set up a competition; to ensure that all the cars got seen by visitors to the show, the guests were asked to vote for their favorite car. 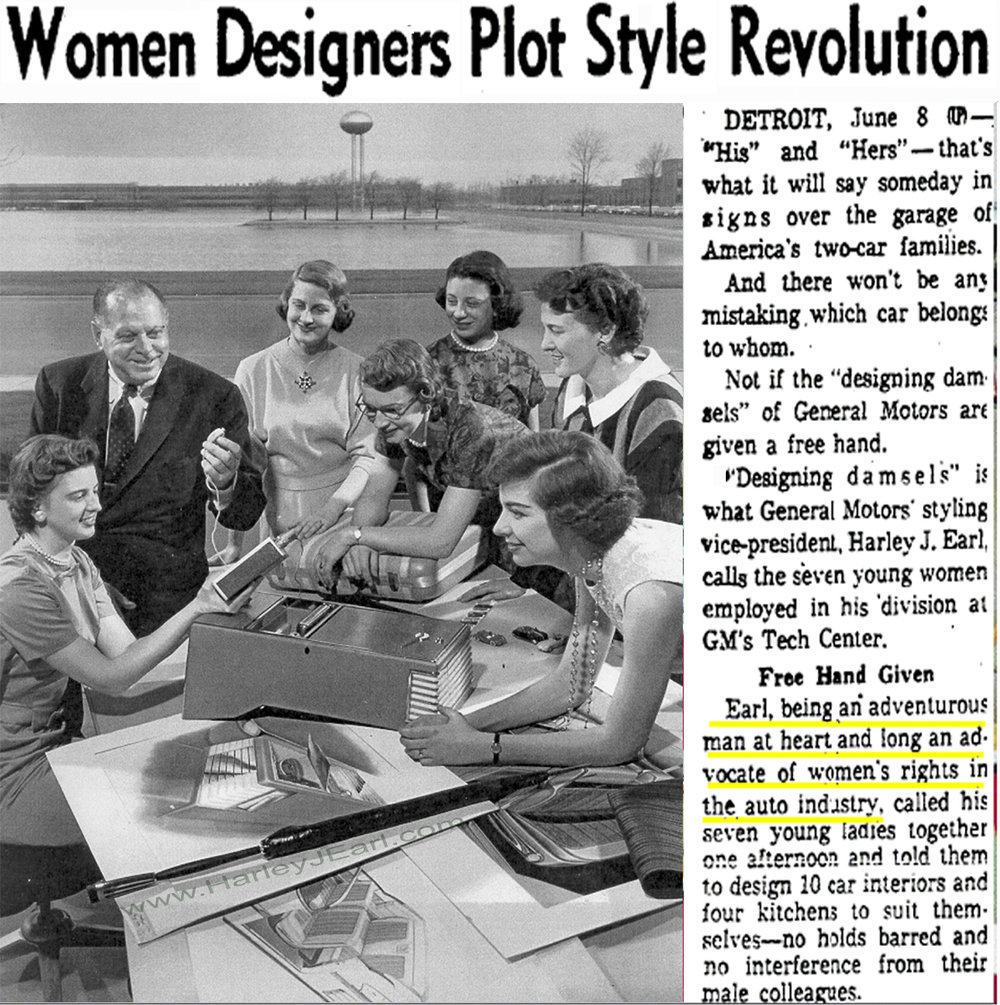 The show was an enormous internal success, and photos of the exhibit and its cars were distributed to national magazines for publication. It seemed like a defining moment for women in automotive design, and a vindication of Harley Earl’s instincts about the future of GM design.

But then, suddenly, it was all over. Earl retired after the show, and his successor, Bill Mitchell, made no secret about his opposition to women in the design studio. The Damsels knew their days were numbered.

Another ‘Damsels’ publicity photo. Jeanette Krebs is seated on the ladder. She would become the wife of Tony Lapine, of future Porsche 928 fame

All of the Damsels except Suzanne Vanderbilt would leave GM to go on to other design jobs. Several set up their own design consultancies. Some would go to work with architects. Margaret (Peg) Sauer designed a Motorama concept car, the ‘Flamingo’, and  would then leave GM to work with Raymond Loewy , where she was part of the Studebaker Avanti design team. Dagmar Arnold would go on to IBM.

Jeannette Krebs would marry Tony Lapine, who would move on from GM to Opel to Porsche and become famous for his role in the creation of the 928. And Suzanne Vanderbilt would stay at GM, working there for her entire career, at a number of divisions and on a wide variety of production cars. Tragically, cancer would cut short both her career and her life, as it did her fellow Damsel Peg Sauer. 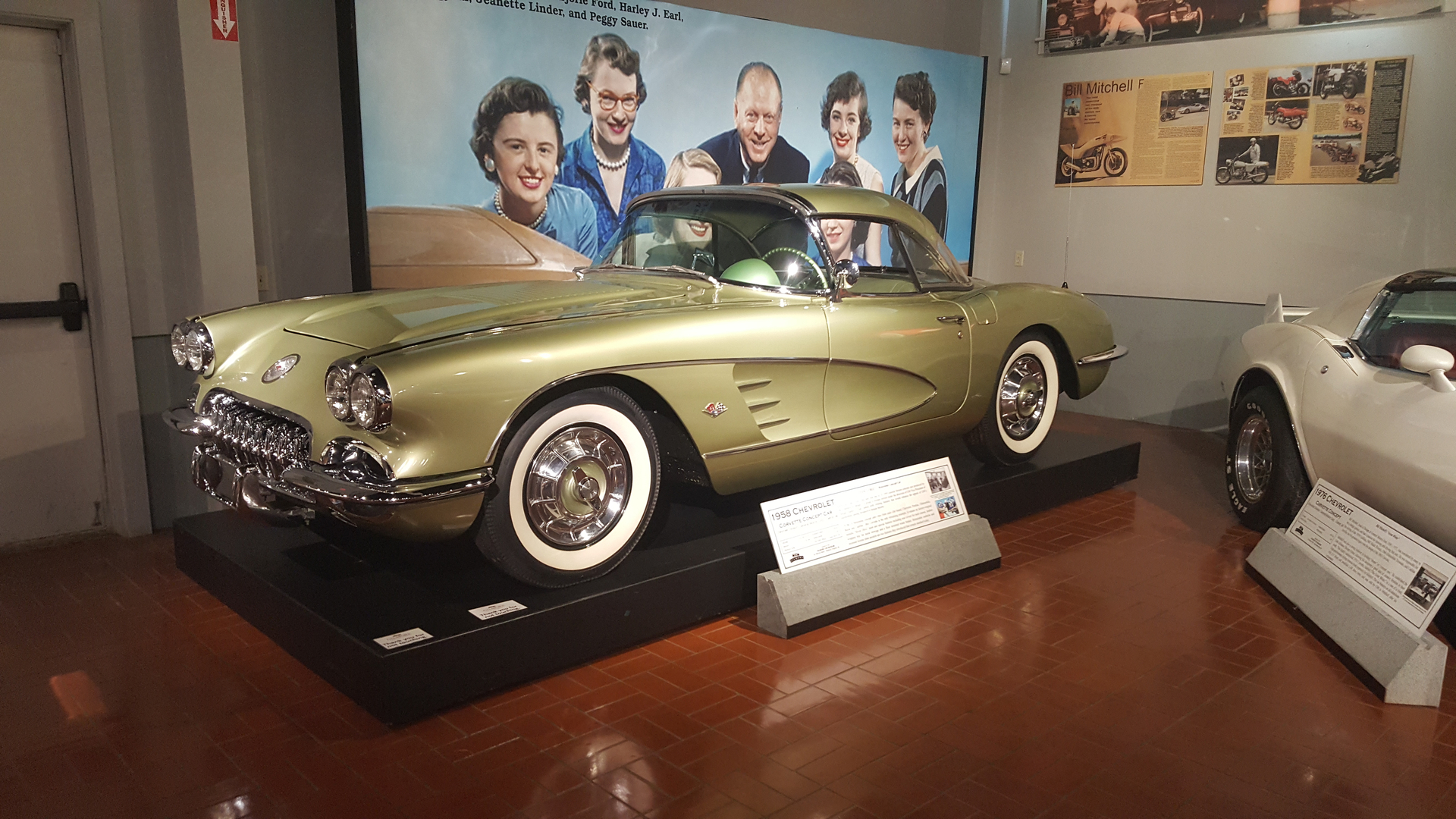 The restored Fancy Free on display at the Gilmore Car Museum. A bit more gold in the colour, in this lighting

Ruth Glennie would stay for a while at GM and then transfer to Vauxhall, working on interiors for the Victor and taking some time off for a tour of Europe. She became Ruth Glennie Peterson in 1962 and soon left to raise a family. GM wanted her to return, but she declined. She would later work for GTE Sylvania, returning to her lighting manufacturer roots and would work on a number of advanced lighting projects, including lighting for automobiles.

Most of the Damsels would look back with fondness about their years at GM. Yes, it was the age of Mad Men, but the women got professional and personal opportunities that eluded other women of their generation. They met and worked with the designers of some of the greatest cars in American automotive history. They also worked with fabric and furniture manufacturers and got to interact with designers in the most important fields of the time. Some flew to Paris to attend the fashion shows and all kept abreast of the latest fashion, colour and interior design trends. 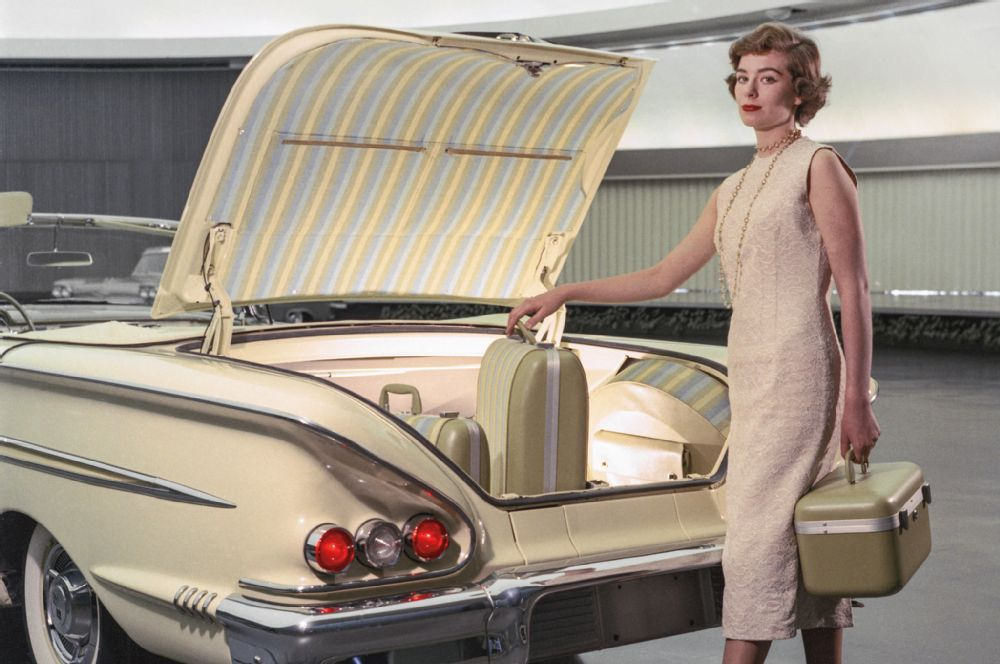 In the competition at the 1958 ‘Feminine Show’ Jeanette Linder, the designer who could not even drive when she came to GM, enjoyed a moment in the spotlight as her car ‘Martinique’ took top honors. Glennie’s Corvette finished a disappointing third. But in the end, the ‘Fancy Free’ won: it is the only car to survive until the present day. It has been fully restored – even its selection of swappable seat covers – and was recently shown at the Gilmore Car Museum in Michigan. It remains an elegant artefact of a pioneering moment for women in design, even in the midst of the Mad Men era. 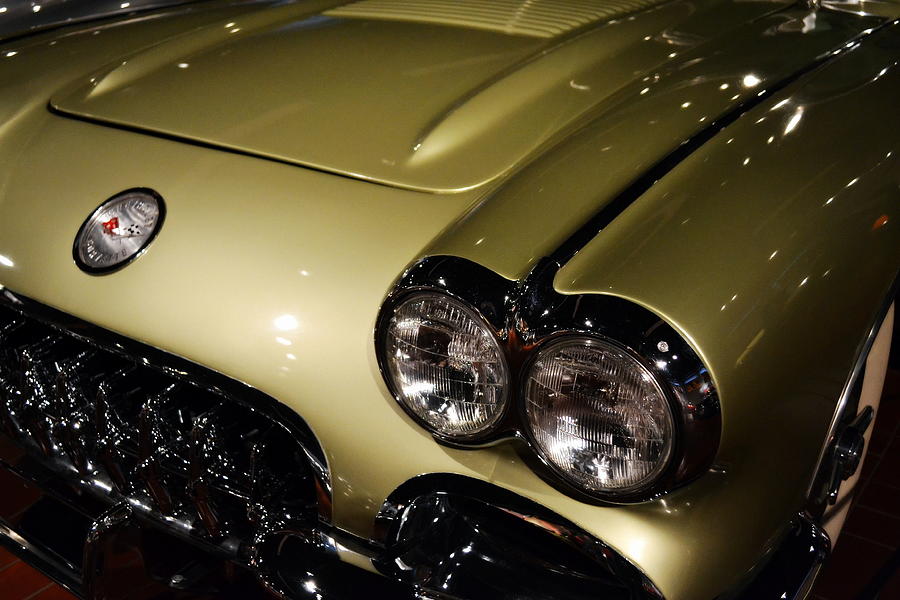 If you would like to read more about the Damsels and other pioneering women in American automotive design, we highly recommend the book Damsels in Design by Constance Smith. We’ll be featuring more about this book and its fascinating stories in the very near future, so watch this space…