The car was conceived and designed by Leonardo Fioravanti and built for the 1998 Geneva motor show. Named the F 100, it was designed to be a near-future mid-engine Ferrari coupe.

The project was conceived as a surprise for the Ferrari team and family. As such, it was developed under the codename Priamo, the name of a famous king of Troy. But the name had nothing to do with Troy; it was actually a combination of the Italian words Primo and Amore – first love. 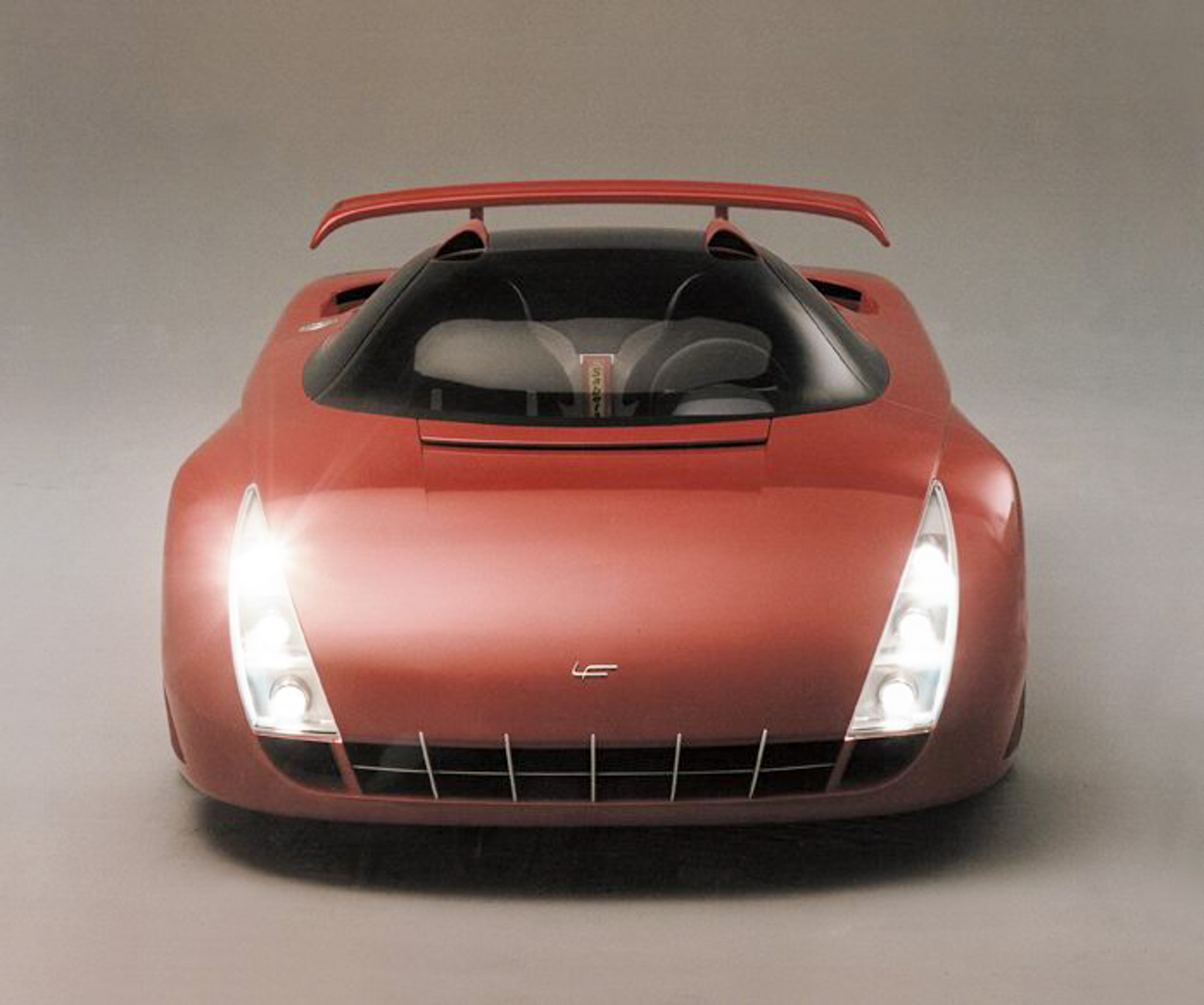 Fioravanti had a long and successful career at Pininfarina where he worked extensively with Ferrari designing such classics as the Dino, the Daytona, 308GTB, the Testarossa, and many others. The F 100 was a coda of sorts for Fioravanti, his way of summing up a quarter-century of design thinking about what Ferrari should be.

The proportions of the F100 were slightly different than many of its Ferrari predecessors. The F100 sported a longer, curving nose, an elongated wheelbase and a short tail, just barely enough to cover the rear wheels. Classic Ferrari design touches still featured, most notably the round tail lights – although, unusually, these used neon as the light source and were formed of free-standing hoops. 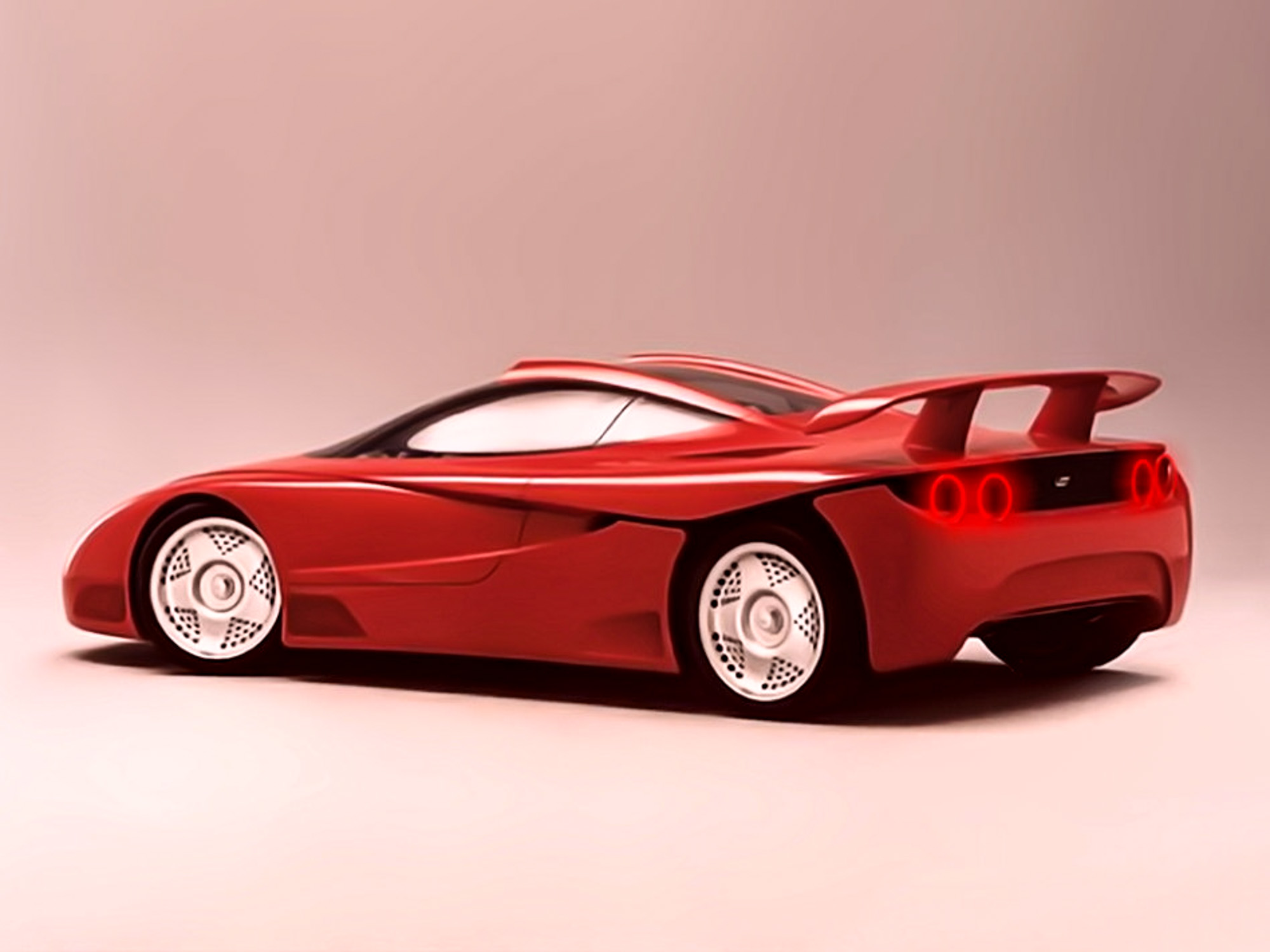 The car's bodyside was dominated by a character line that emerged from the headlights, and sliced across the bodyside to give emphasis to the flowing sheetmetal.

The rear of the car also featured extendable air brakes which deployed upward from the rear deck and down from the rear bumper, doubling drag and increasing stability when braking from high speeds. 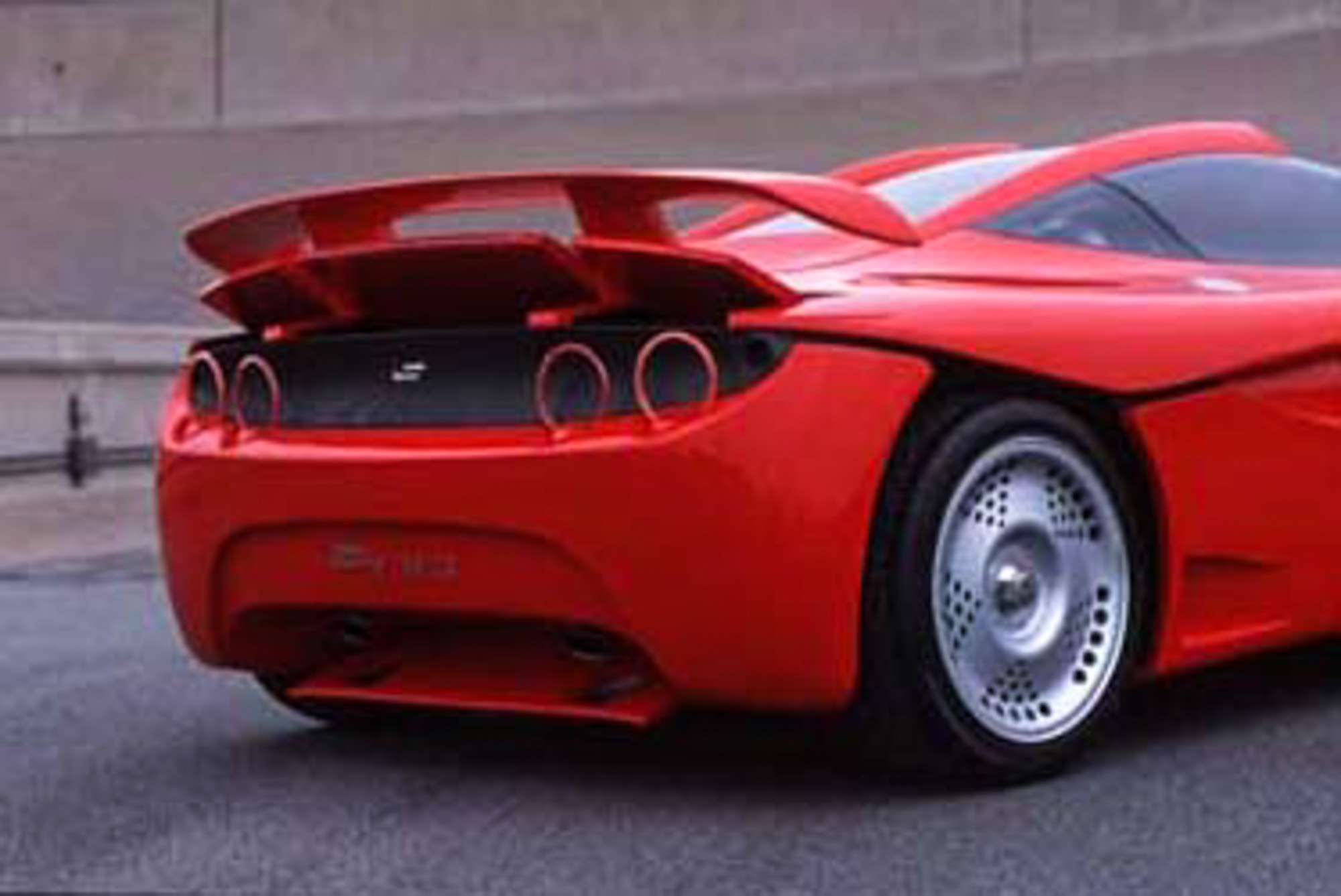 Although the car was intended to be powered by a detuned version of Ferrari's contemporary V10 Formula 1 engine, the interior was built more for comfort than speed. The seats were designed to keep each occupants whole body relaxed, and included integrated leg supports that, on the driver's side, included the brake and throttle pedals. 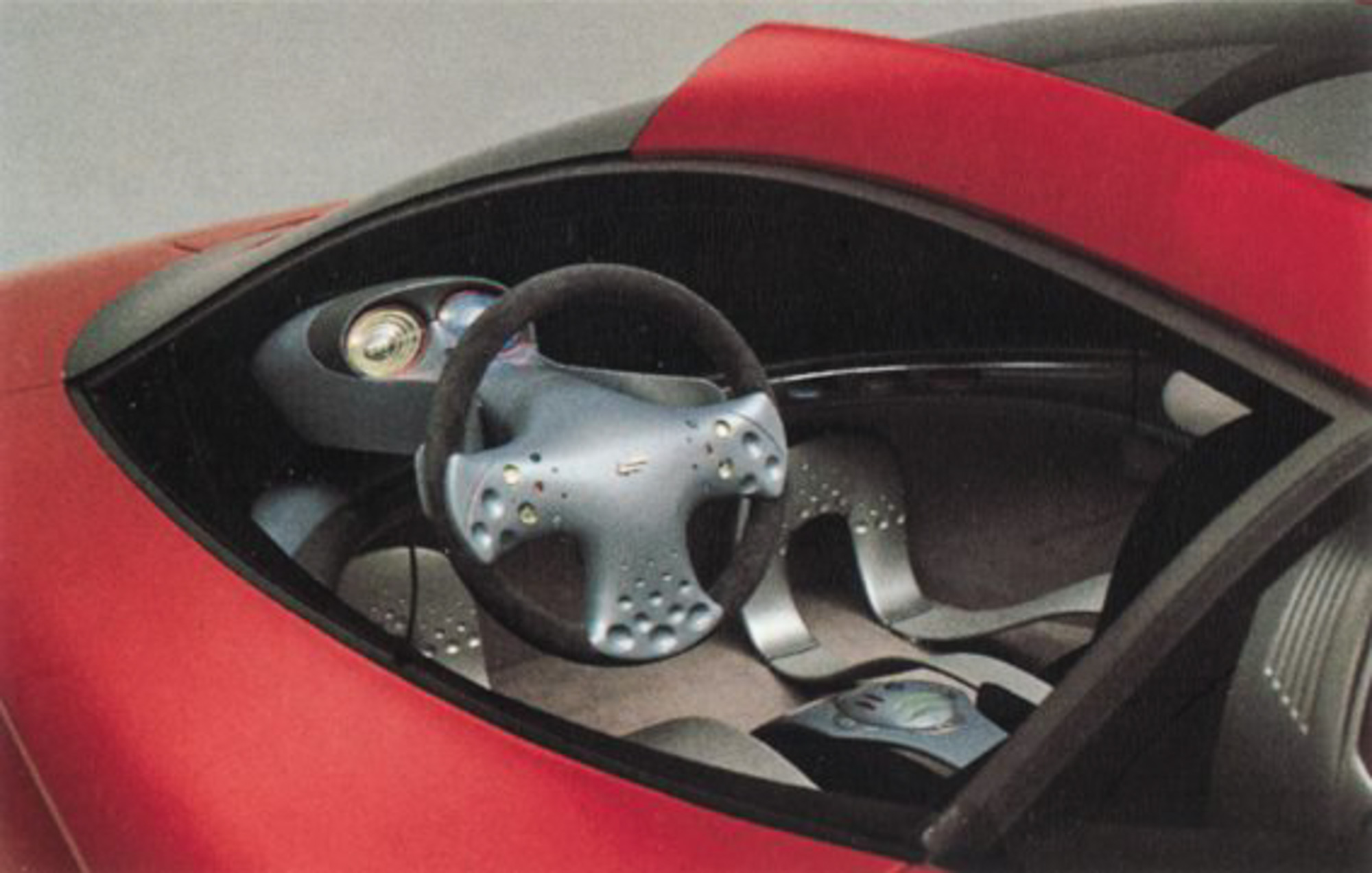 Shifting was done through F1-type paddle shifters that curved behind the steering wheel, while most of the car's remaining controls were integrated into the wheel itself. As the car was intended to reach high cruising speeds, Fioravanti added digital and analogue instruments that were designed to be easier for the brain to process. The passenger compartment was covered by a retractable glass roof that slid between the engine's roof-mounted air intakes. The mid-mounted engine could also be seen beneath a glass cover. 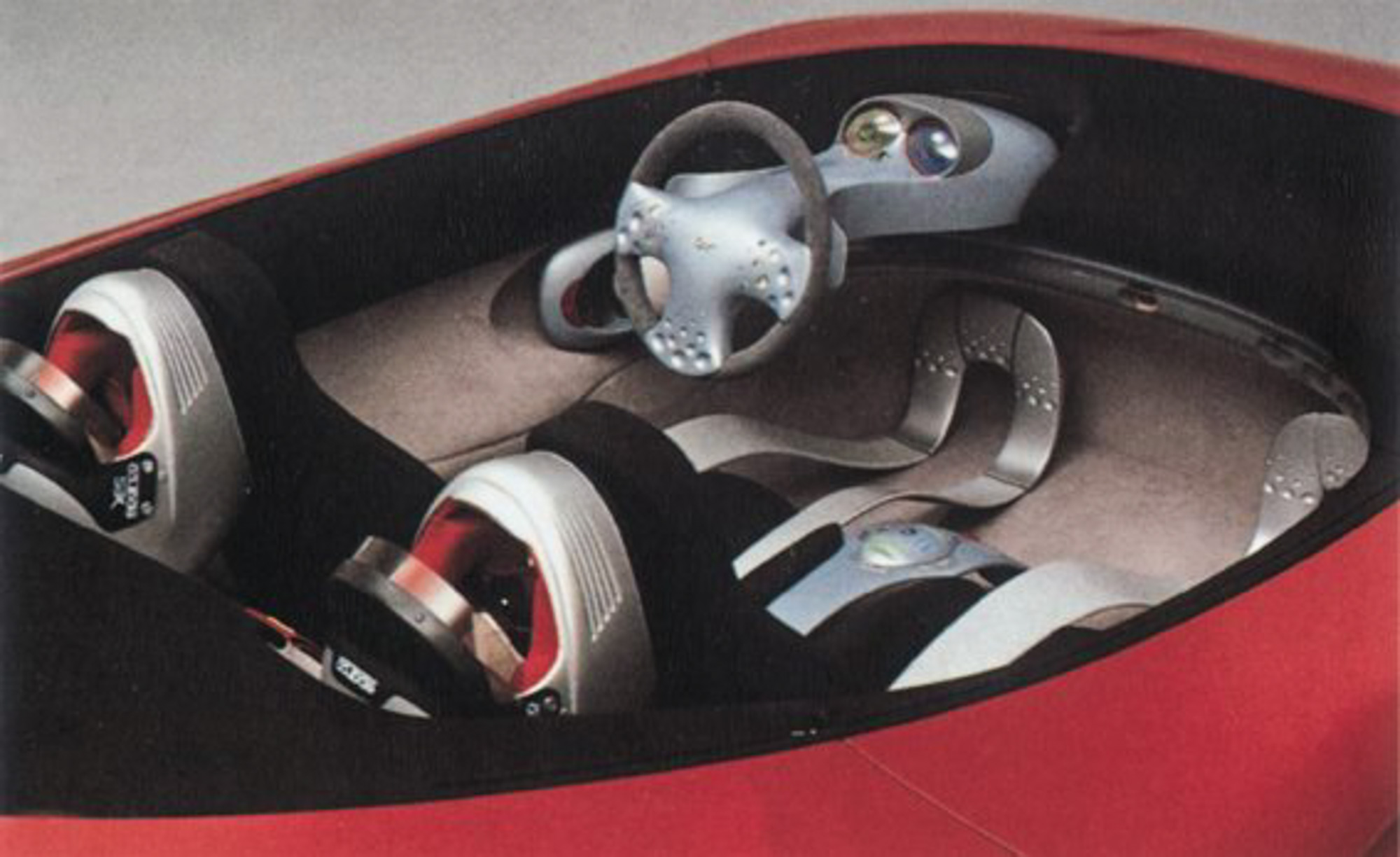 Ten years after the F100 was first launched, and twenty years after Fioravanti’s design practice was was formed, a Japanese customer commissioned the firm to make a new design for a one-off Ferrari F430-based road car. Dubbed the SP1, it includes some elements of Fioravanti's original design, although the modern reincarnation lacks much of what made the F100 such a fitting tribute to mark the occasion of 100 years since Enzo Ferrari's birth.

If you would like to read more about Leonardo Fioravanti’s career and his design process, we highly recommend his autobiography, published last year. Illustrated with technical drawings and rare photographs, as well as great stories of working with some of the greats of the Italian design profession and industry, the book covers Fioravanti’s entire professional career.