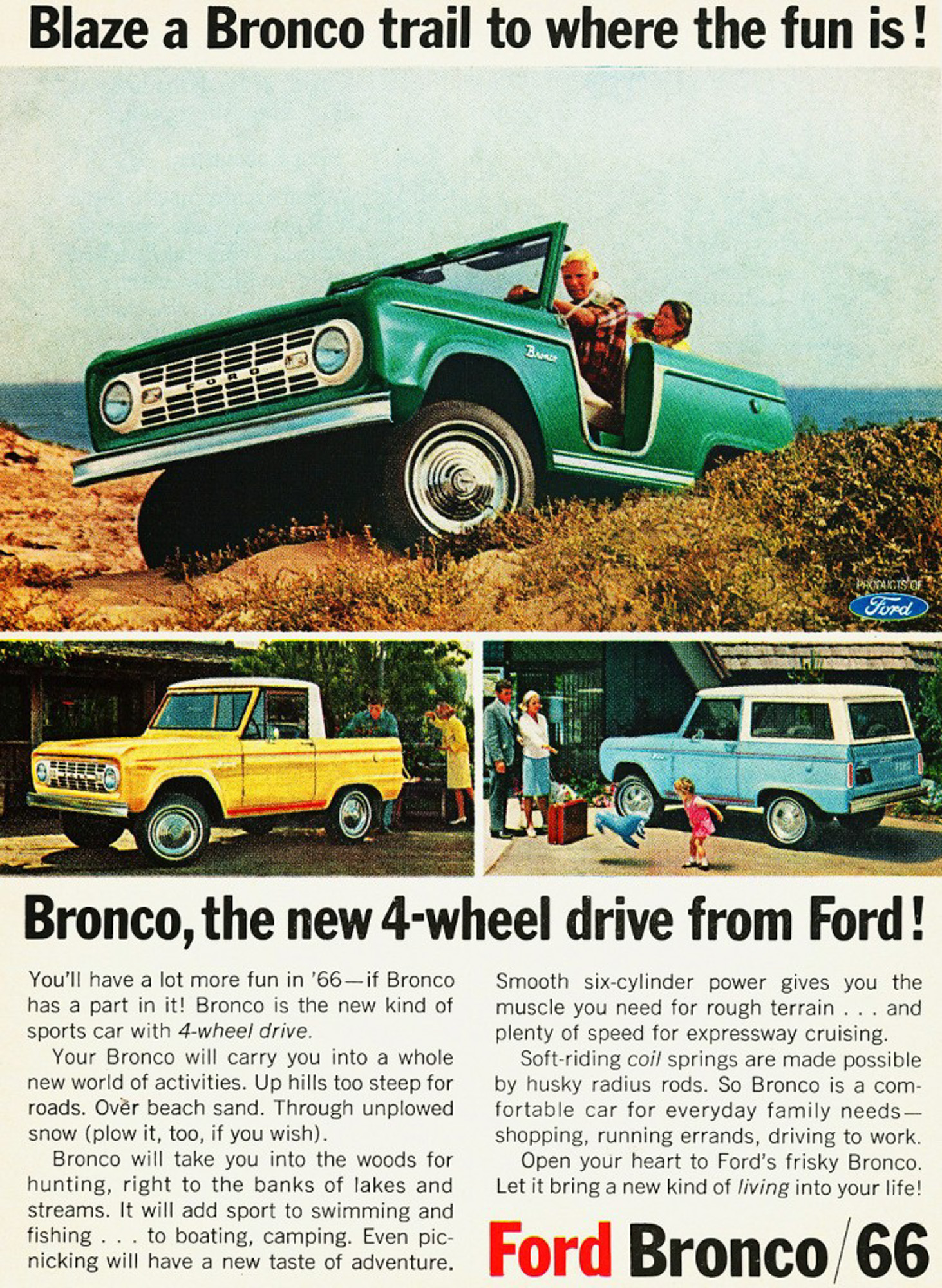 The original Ford Bronco was, and still is, a cult classic, attracting an enthusiastic fan base that kept Ford’s first compact SUV in production for 30 years. Conceived by the same product development team that created the Mustang, the Bronco was introduced in 1966 to compete with the Jeep CJ, and the International Harvester Scout.

The packaging of the Bronco was very straightforward: simply a box on a box on four wheels, with a light application of brightwork to add visual interest; its simplicity reflecting its role as a functional tool. However, owners were loyal to the homely but reliable Bronco, and its infinitely customisable platform, and the fan base was greatly dismayed when it was discontinued in 1996. 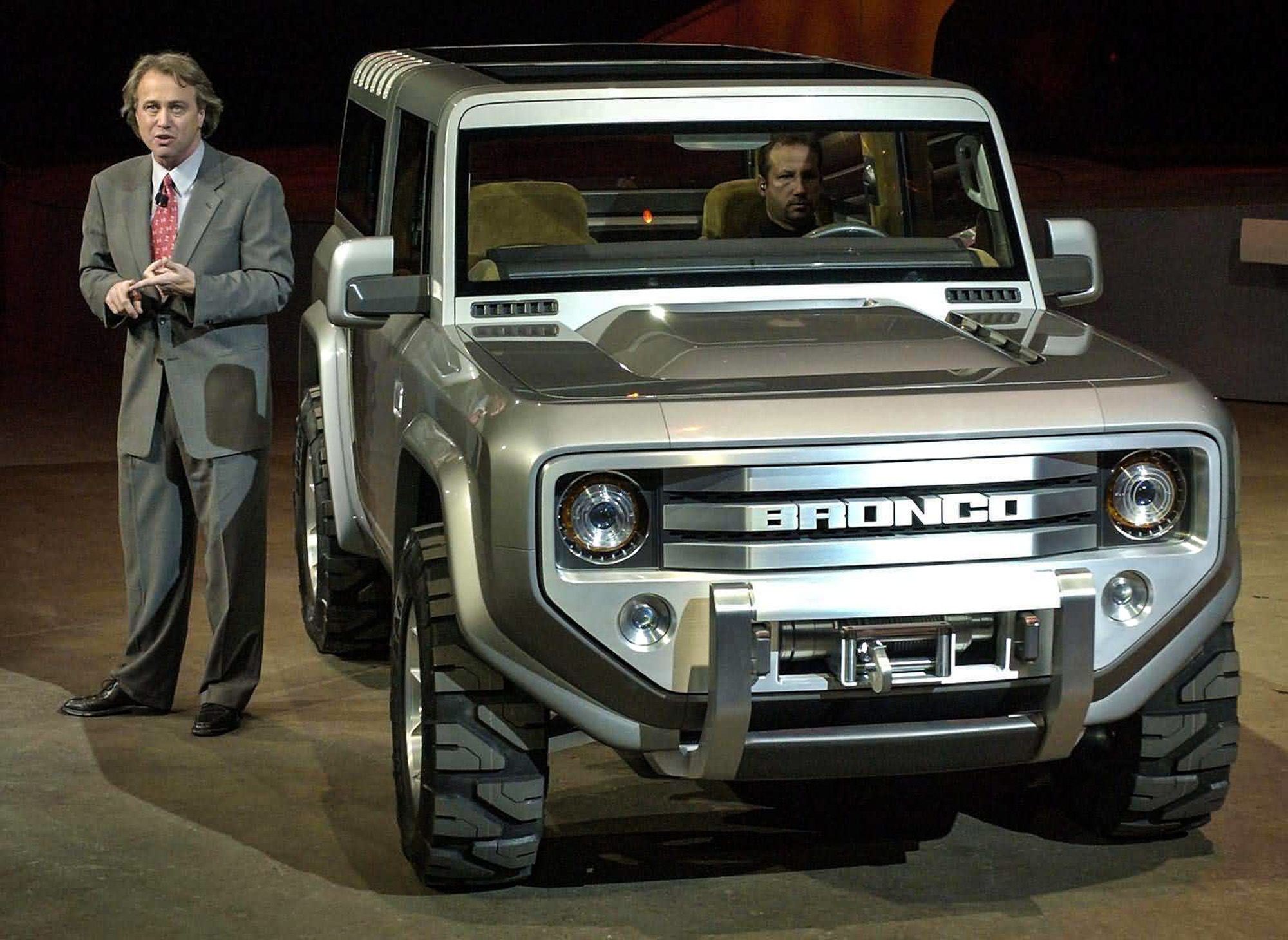 Eight years later, at the NAIAS in Detroit, hope of a return was rekindled with the introduction of the Bronco Concept, a two-door SUV of the roughly the same size and shape as the original. Indeed, at first glance, the Bronco Concept seemed like another retro styling exercise from J Mays and his team. 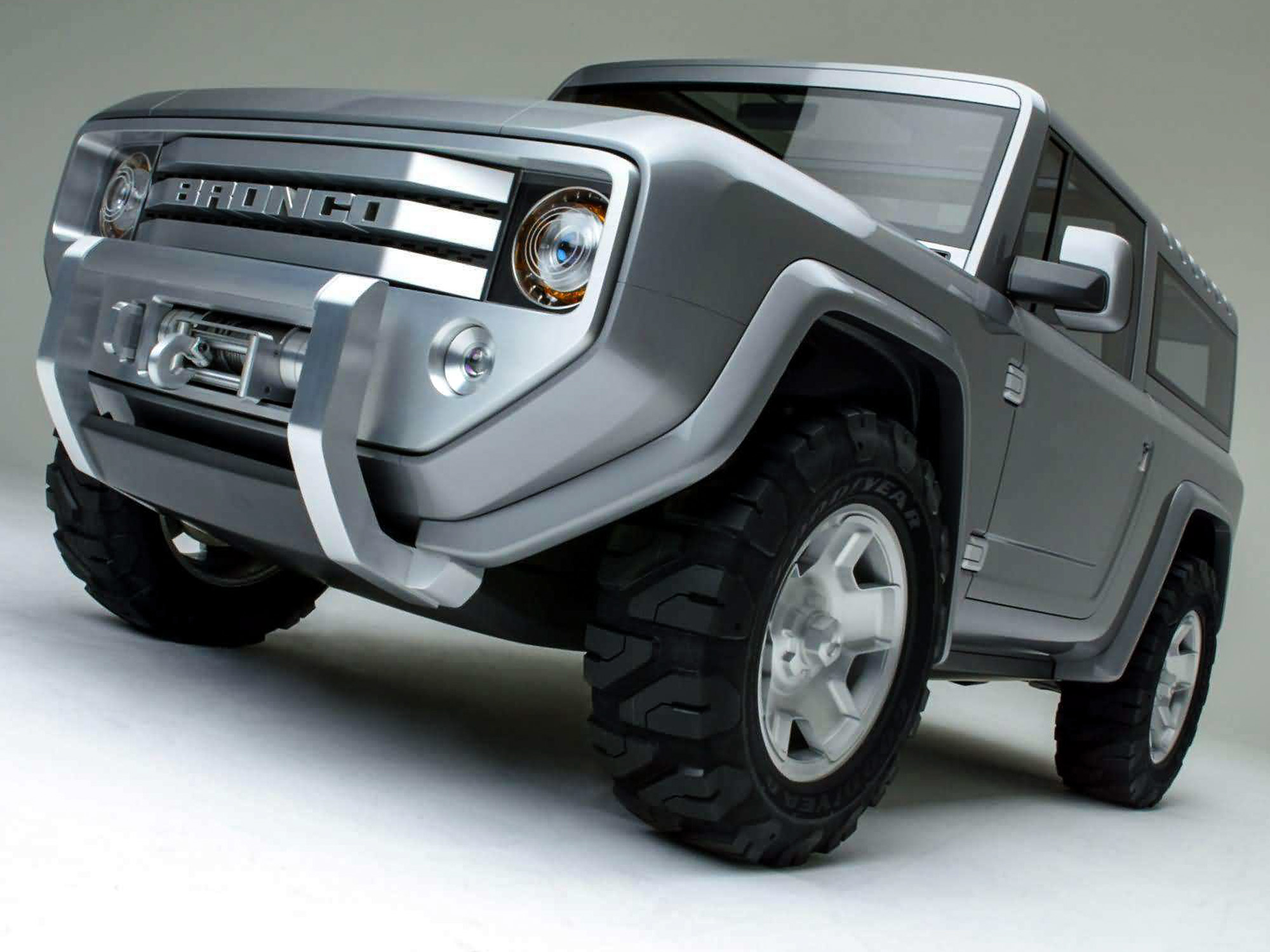 Certainly there were strong design cues to the 1966 Bronco: The upright glasshouse, with flat glass, returned, as did flat, simple surfaces, exposed door hinges, and the short wheelbase. 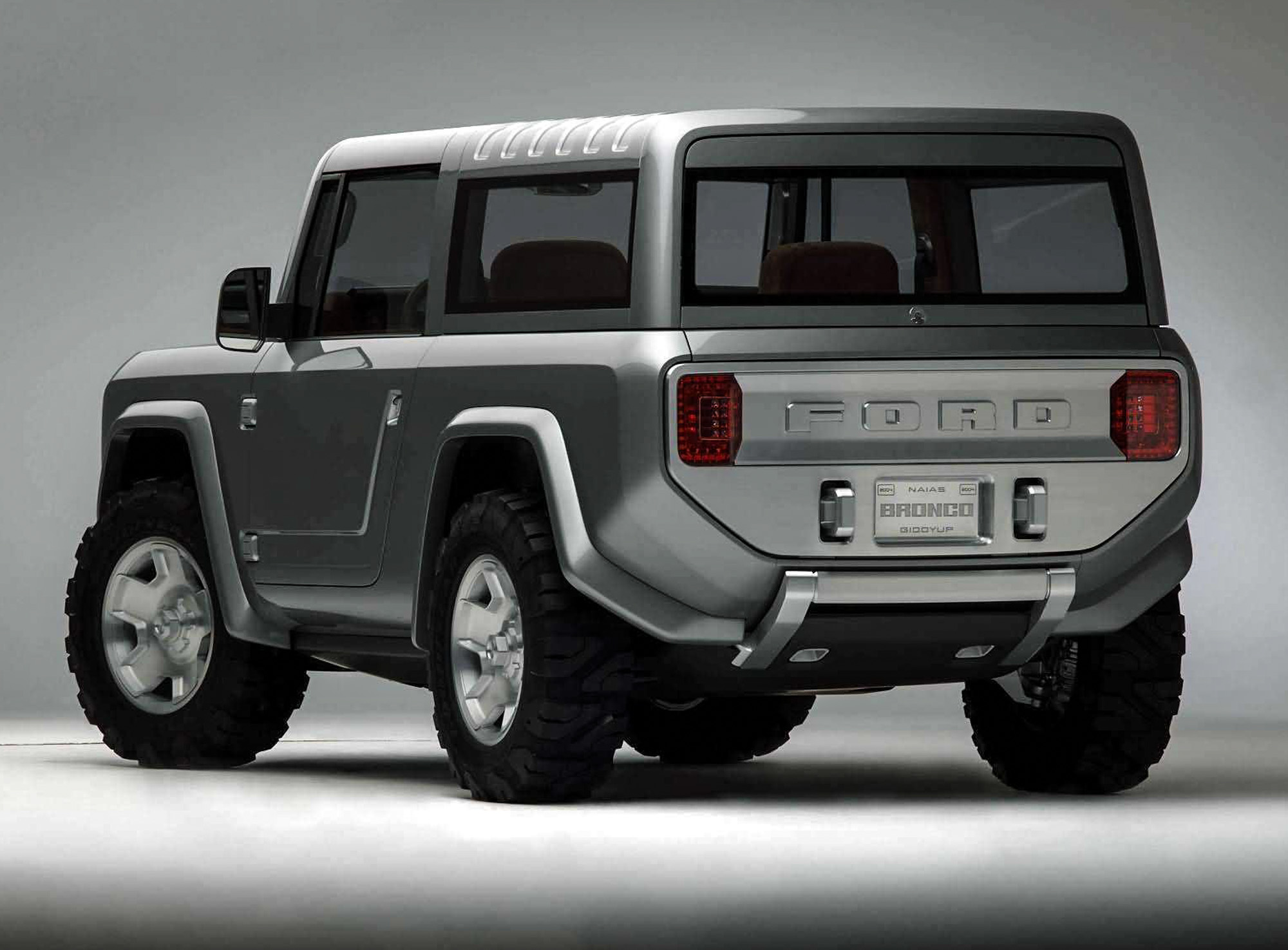 But a closer look revealed a much more sophisticated exterior design, more nuanced in proportions and in details than the original. From certain angles, the Bronco did not look so much constructed as machined out of a solid block of aluminium. 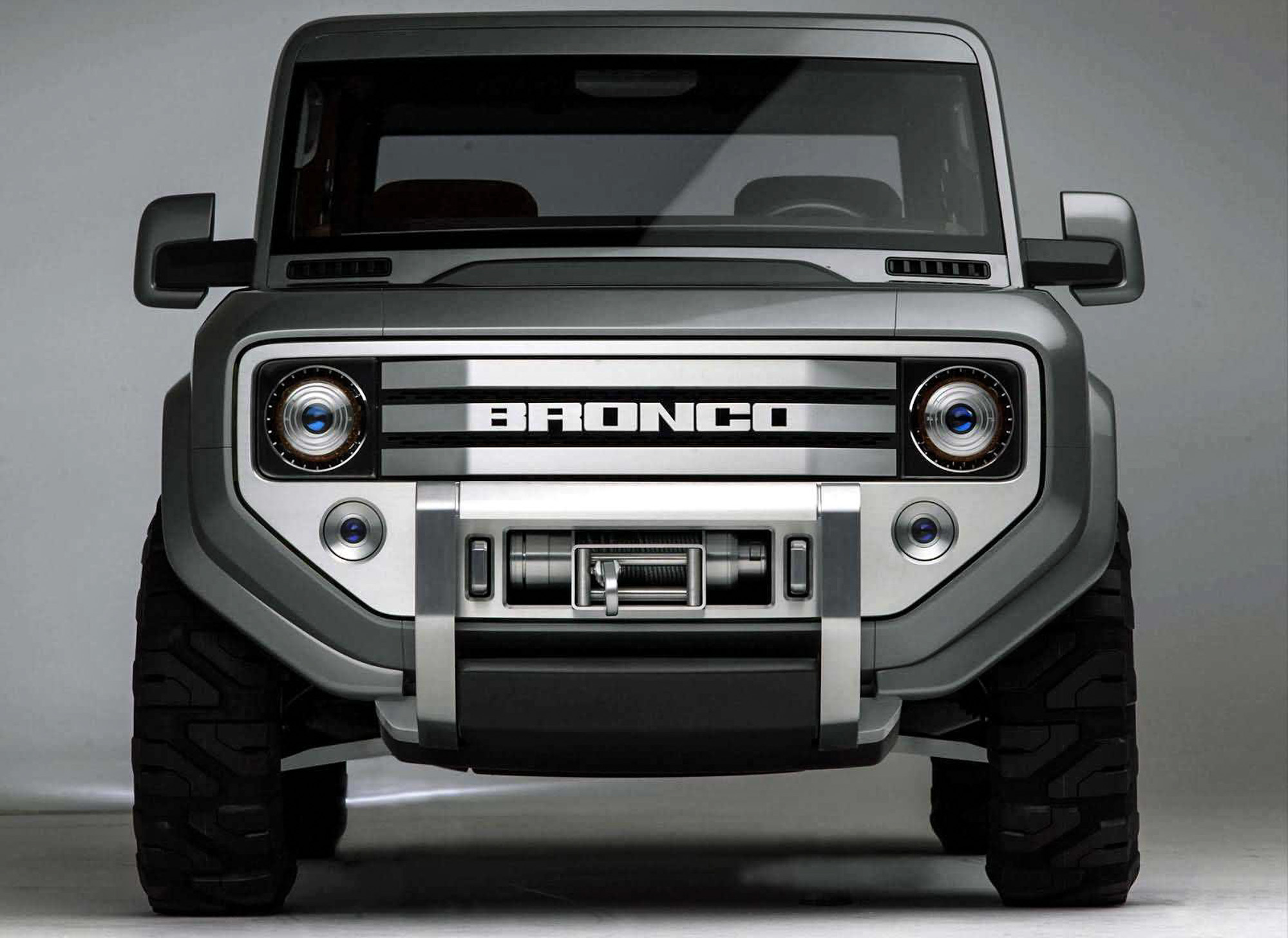 The front elevation was composed of bold, simple elements: circular lamps, and rectangular grille bars, with the “Bronco” emblem centred in bold type. The bottom of the fascia was cut in at angles to form a trapezoid shape and revealed the heavy off-road tyres beneath. Dual push bars framed a built-in winch. 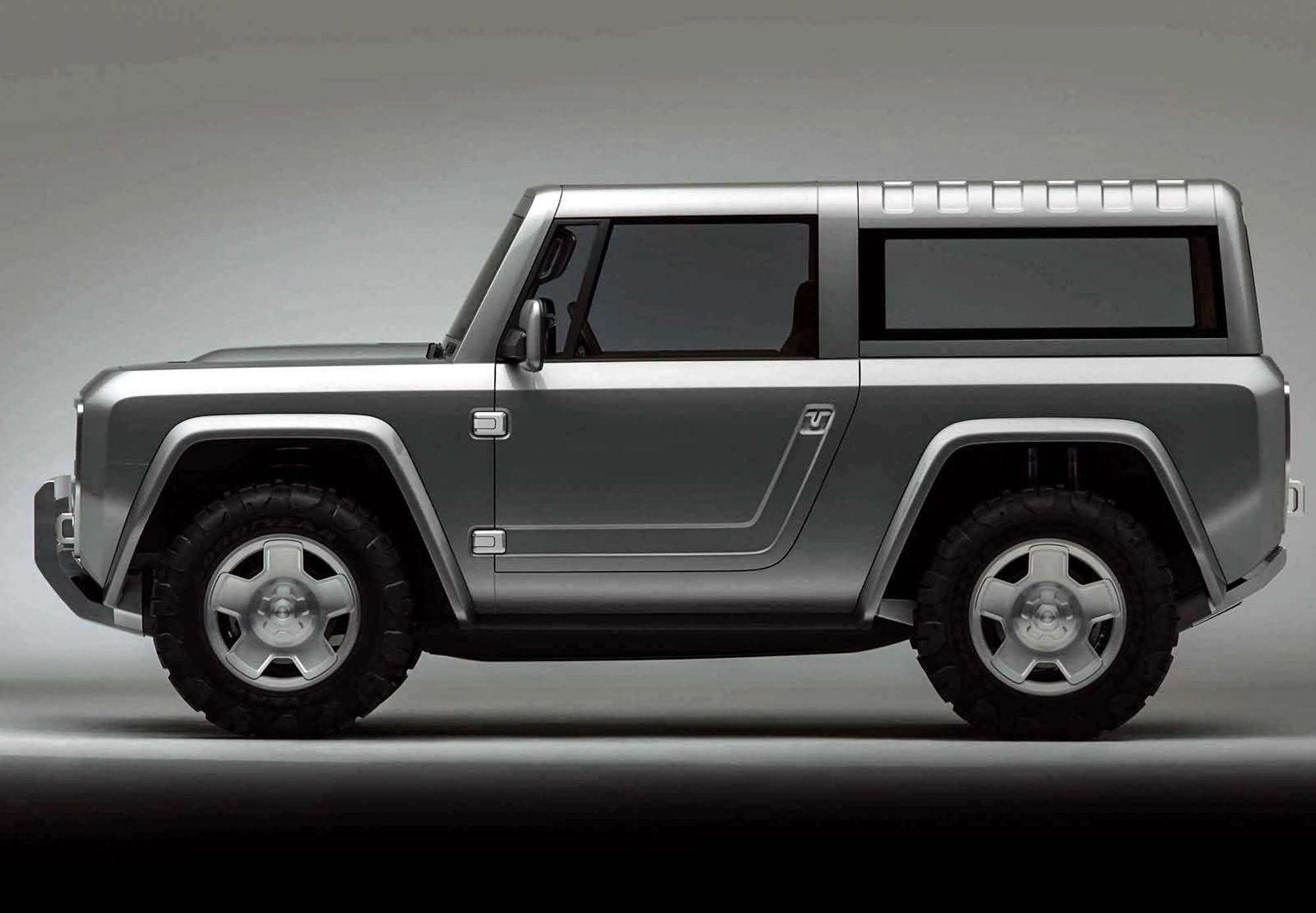 The squared-off side profile revealed the strong relationship to the original in overall form. However, new features included a hockey-stick-shaped character line that extended from the lower exposed door hinge to the rope-like door pulls. Strong chamfers that ran from nose to beltline to tail acted as strong visual connectors between adjacent surfaces, and contributed to the milled-from-a-solid-block look. 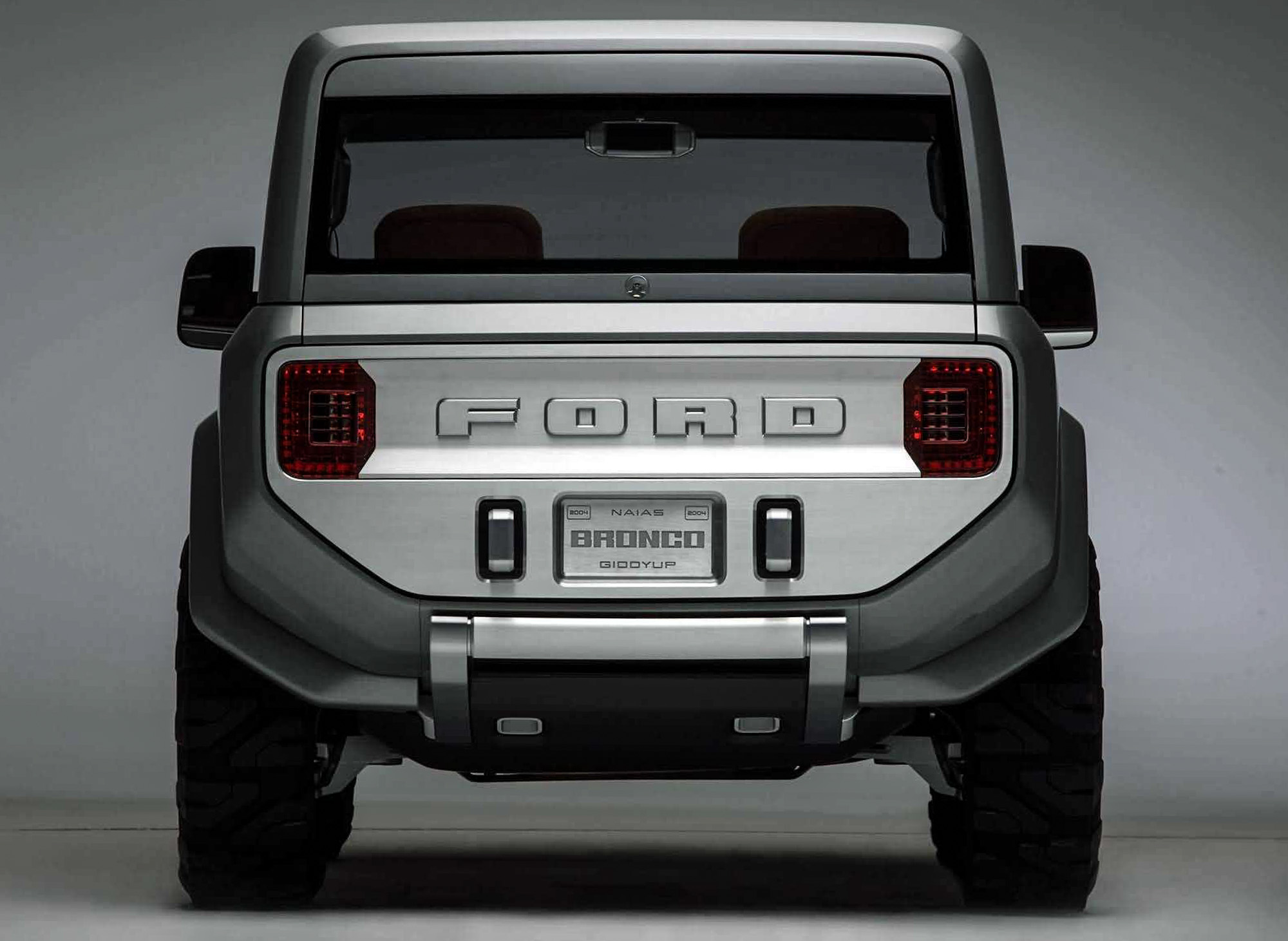 The rear repeated the trapezoidal shape of the car's front, with an embossed Ford emblem and swing gate giving easy access to the rear luggage space. The rear of the roof could also be removed for open touring, and a roll bar assembly could be bolted in for safety and to emulate the off-road Baja racers of the 1970s. 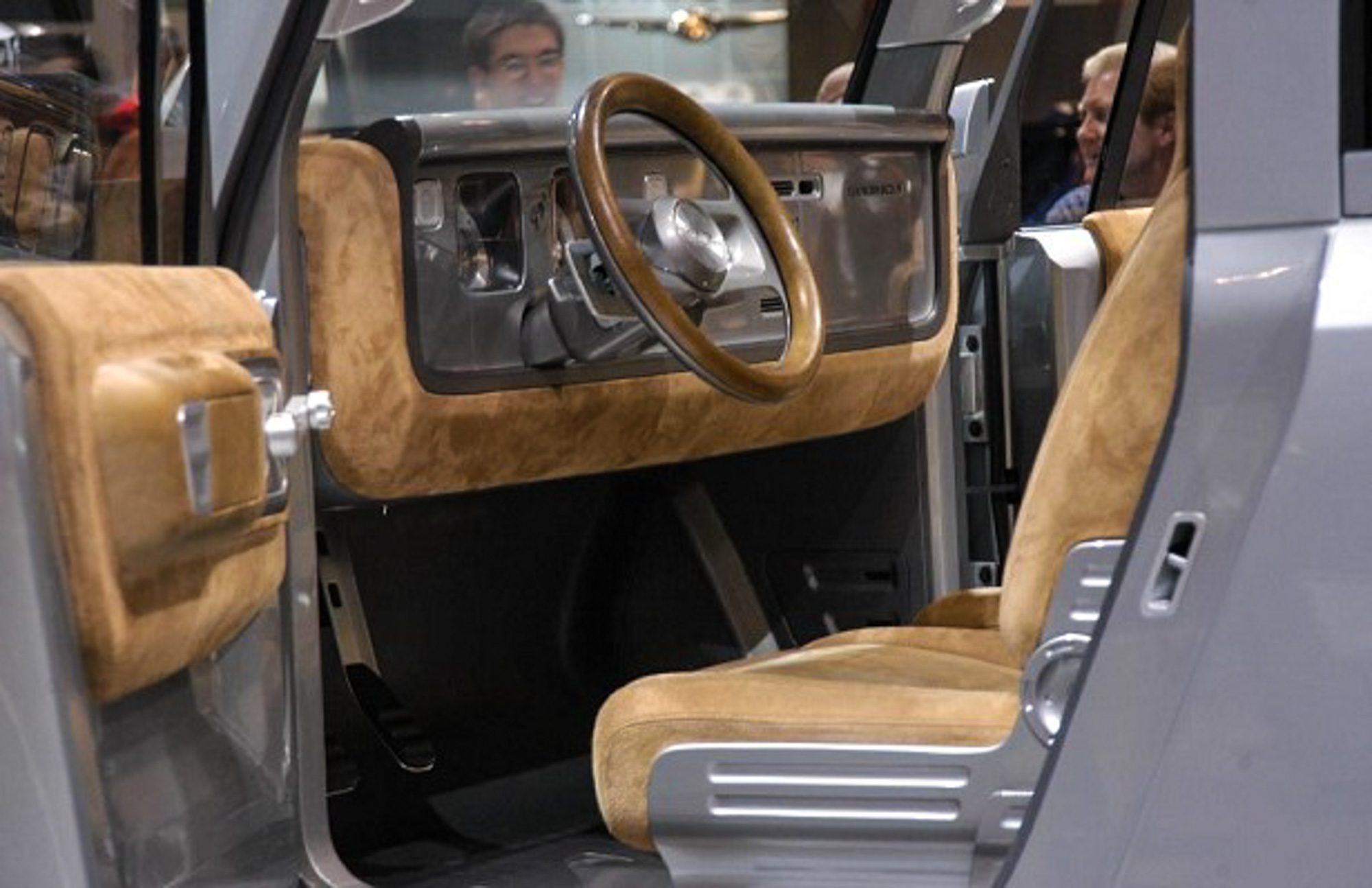 The interior was spartan: a simple steel slab formed the IP, while the steering wheel was finely machined with a wood rim. Circular analogue instruments complemented the steering wheel as a counterpoint to the strong rectangular elements in the interior – including the flat glass as the front and sides. 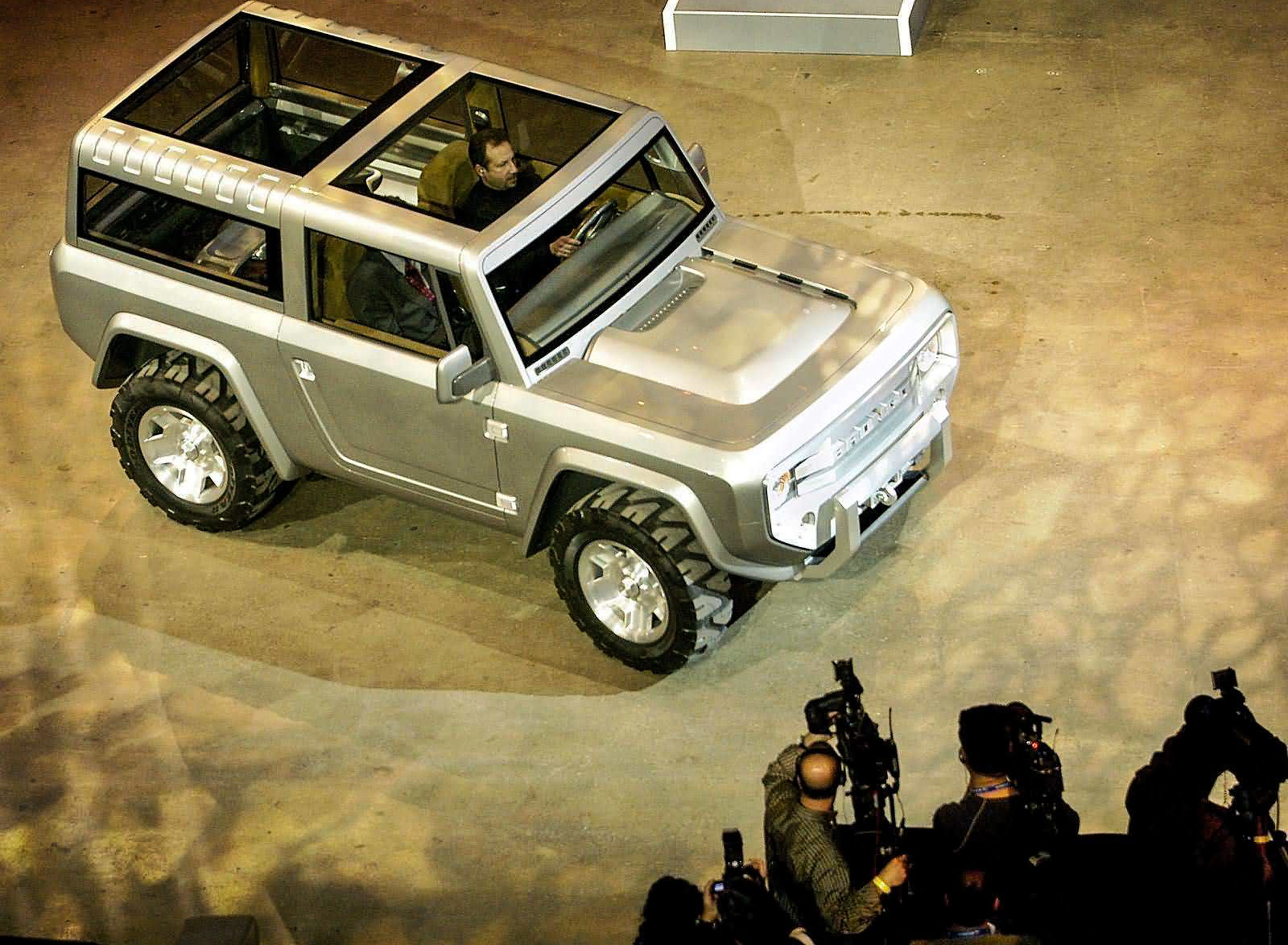 The roof was also made of glass for a full panoramic view of the great outdoors. The IP surround, seats and door cards were the only parts of the cabin to be upholstered. This was done using a mixture of ginger-coloured suede and leather, and was intended to look like materials used for work gloves and tool belts. 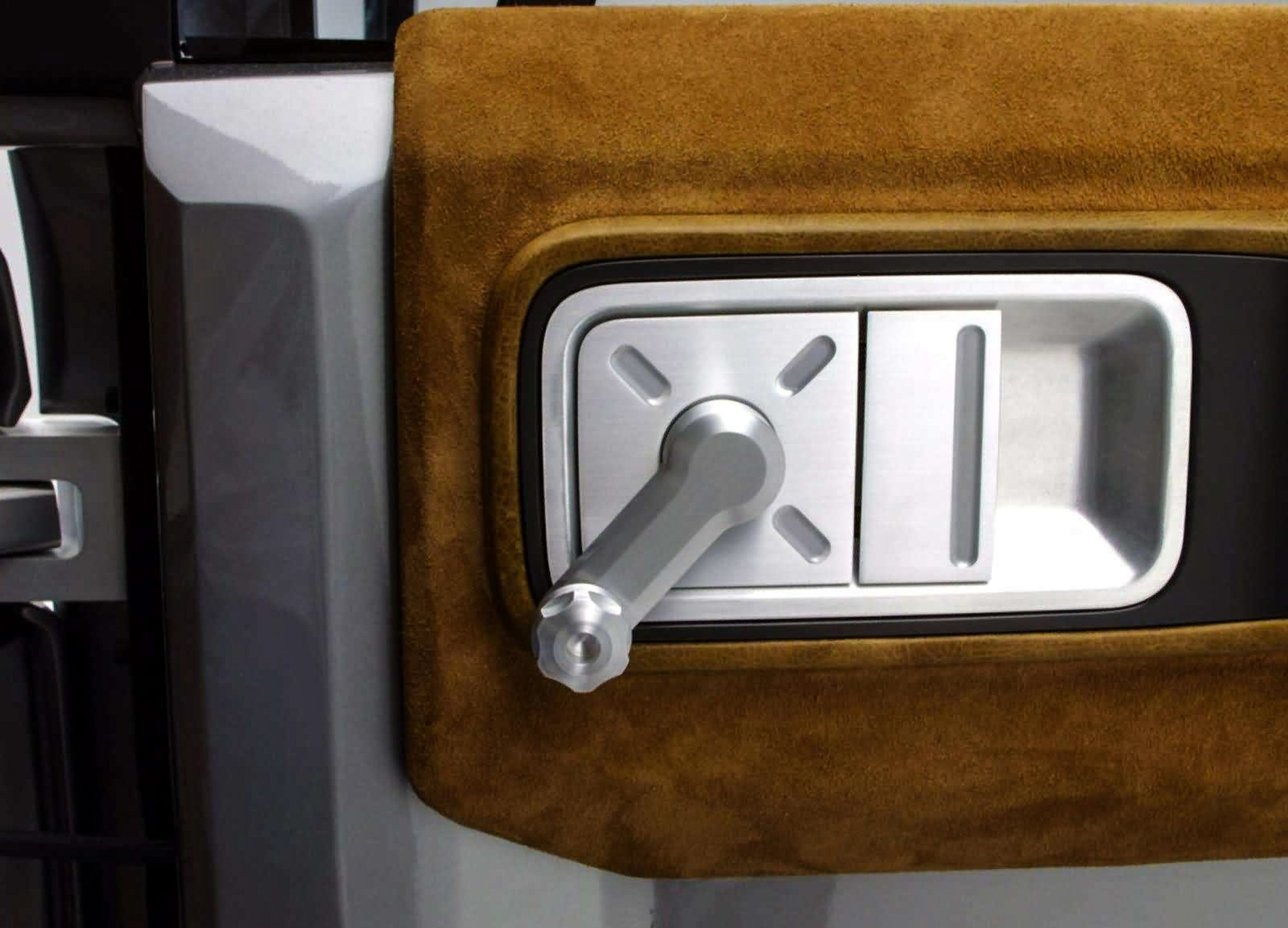 Speaking about the Bronco at its introduction, J Mays would emphasise the functional aspects of the concept, rather than the design: "True to its heritage, the Bronco concept is a tough, genuine SUV that’s all about function. It’s like a claw hammer in a box full of department store, battery-operated, plastic, power tools."

Looking back on the design from a decade later, there was a kind of Dieter Rams/Jony Ive sophistication to the design of this latter-day Bronco. However, while rumours of the Bronco’s imminent return continually circulate, the vehicle always seems a generation away. It remains to be seen if Ford research will sense a strong enough market for a Bronco for a new generation. Given the success of the latest, global Mustang, we wouldn't bet against it, to capitalise on the retro fever created by the wider availability of the resurrected muscle car. 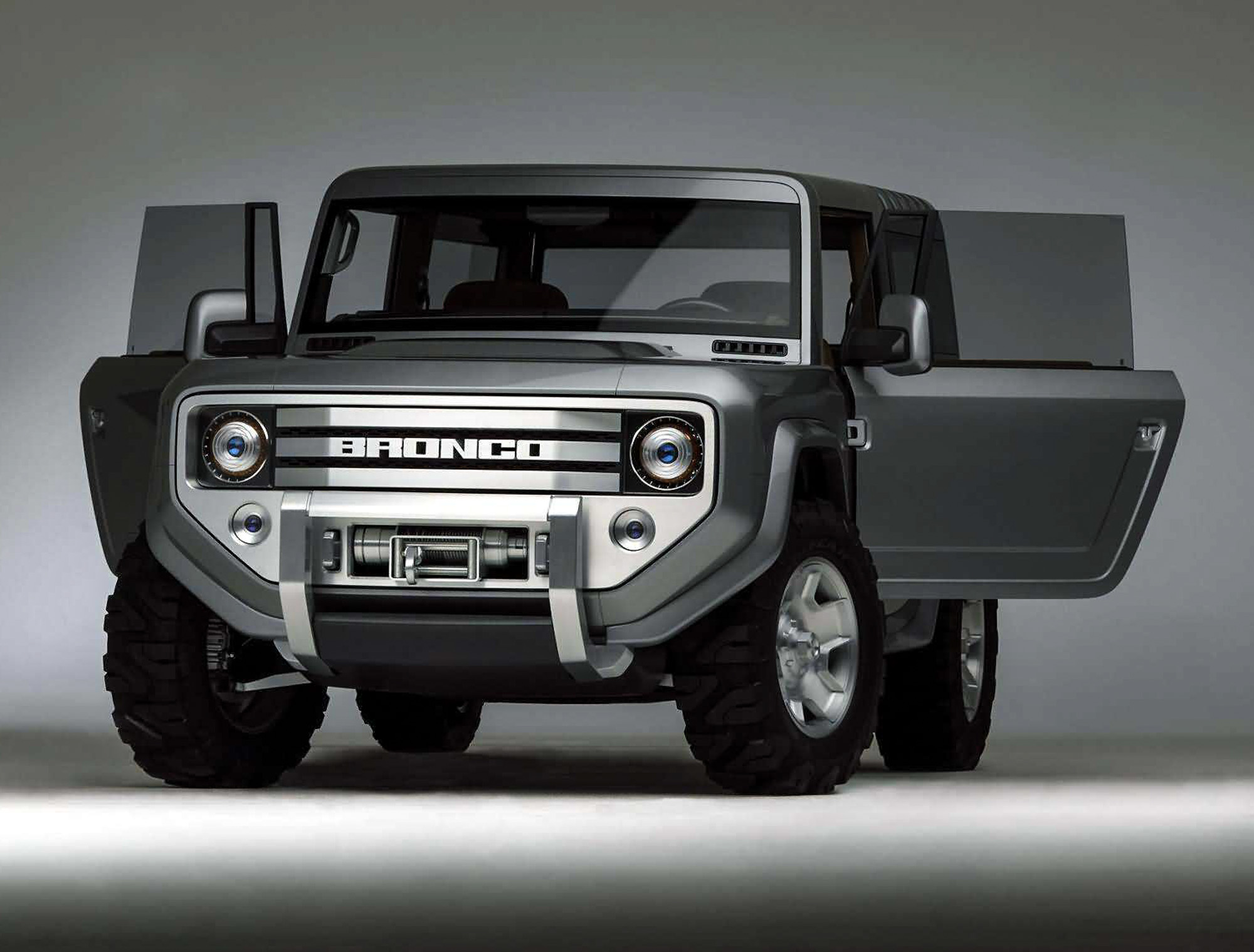