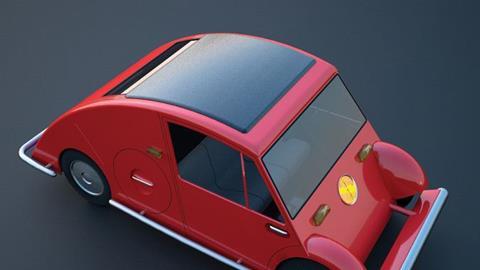 2015 marks the fiftieth anniversary of the death of Le Corbusier, the famous Swiss-French architect who ranks among the great modern masters of the craft

Le Corbusier, whose real name was Charles-Édouard Jeanneret, was frequently inspired by the transportation of the time, particularly the automobile, and often used it to inform his modern architecture theories. Le Corbusier practiced at a time when the automobile was just emerging from its horseless carriage days and was becoming an expression of itself, with its own machine logic and its own, distinct style. 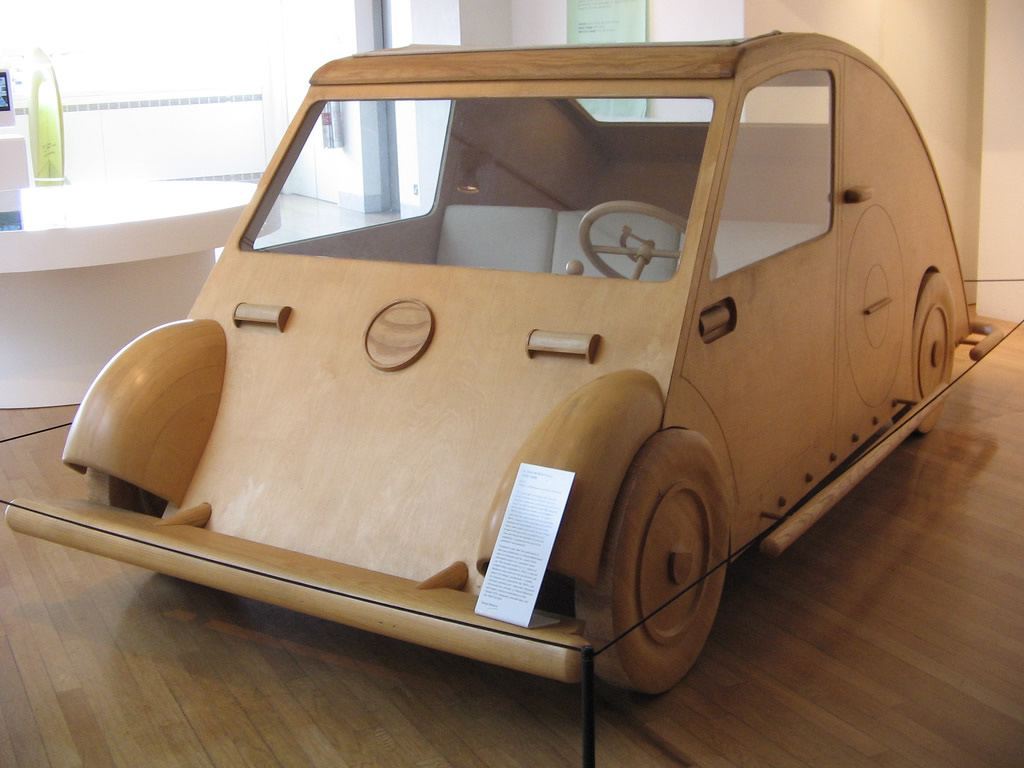 The young architect thought that the automobile represented an ideal metaphor for the future of architecture, a future where the home would be a ‘machine for living’, expressive of modern materials and methods and lived in with great modern style.

Like many architects, he longed to design his own car, and in 1936, he got his chance. A competition, sponsored by France’s Société des Ingénieurs de l’Automobile (SIA), sought to stimulate the country’s industrial base with an inexpensive simple car for the masses to cost no more than 8000 Francs. 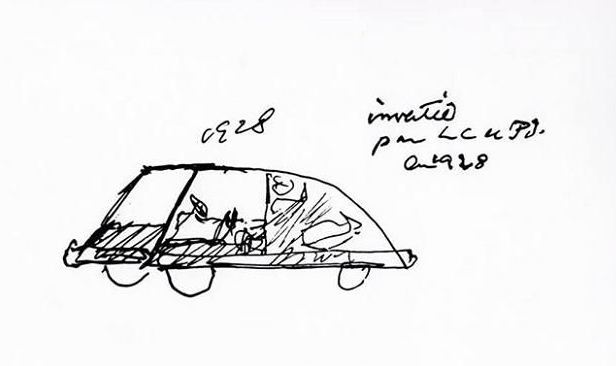 Le Corbusier, and his cousin and business manager, Pierre Jeanneret, jumped at the chance to design a car, and submitted their proposal for a Voiture Minimum. 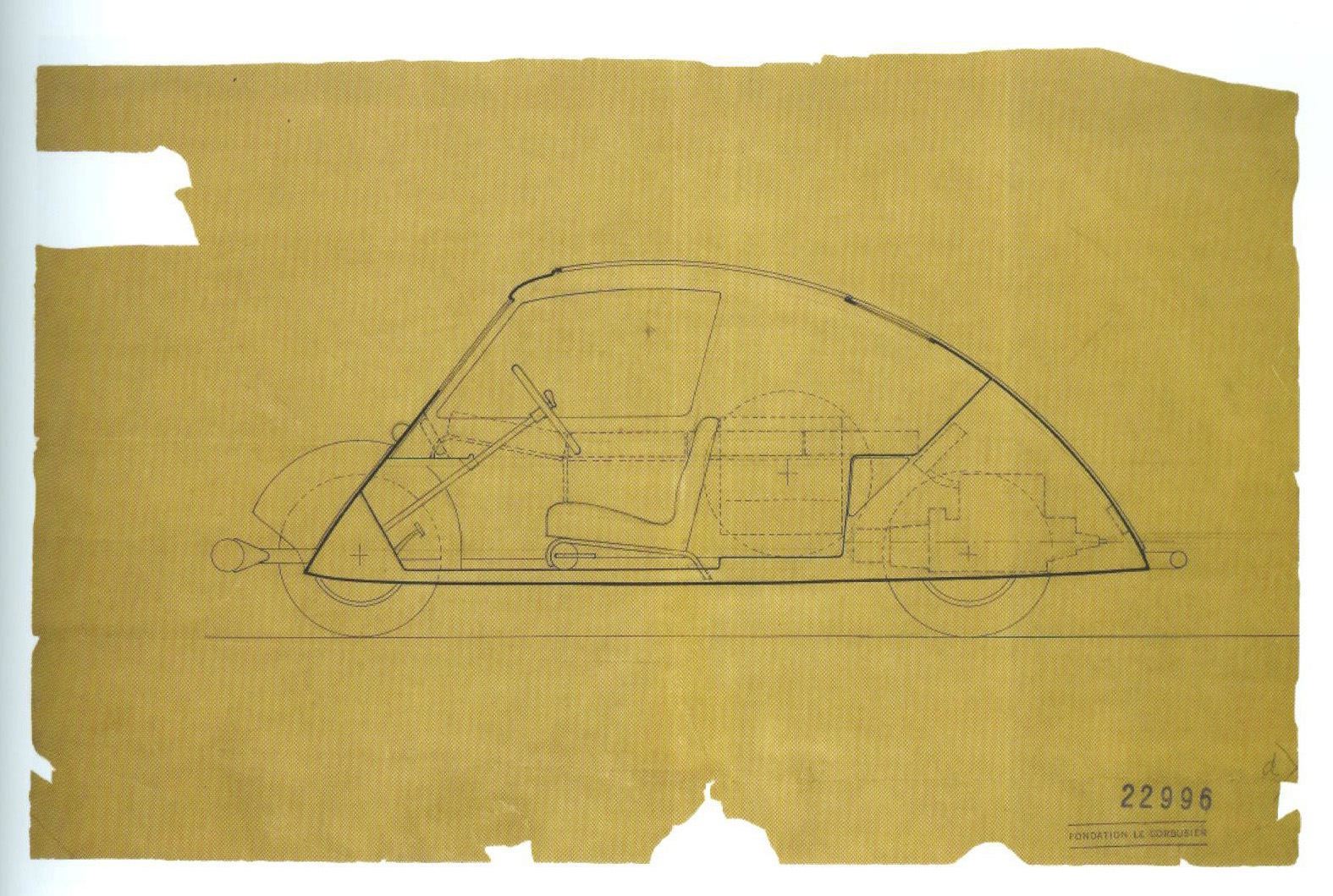 A car described by its designers as “a minimalist vehicle for maximum functionality”, the Voiture Minimum was a squat, frog-like car that looked, quite rightly, as if it had been designed with an architect’s drafting tools – a compass, a straight edge and a triangle. The car’s front end featured a shear panel containing the windcreen. The met the leading edge of the roof, which curved over the passenger compartment and rear-mounted engine. 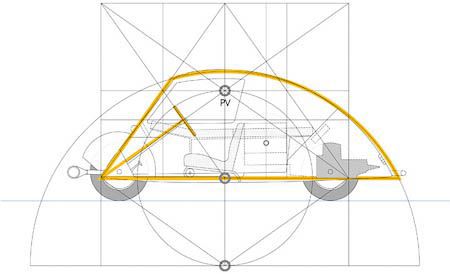 A glance at the side elevation shows proportions that were both odd and strangely correct. Le Corbusier was a devotee of the Golden Ratio and religiously proportioned everything he designed by that ancient aesthetic and mathematical formula. 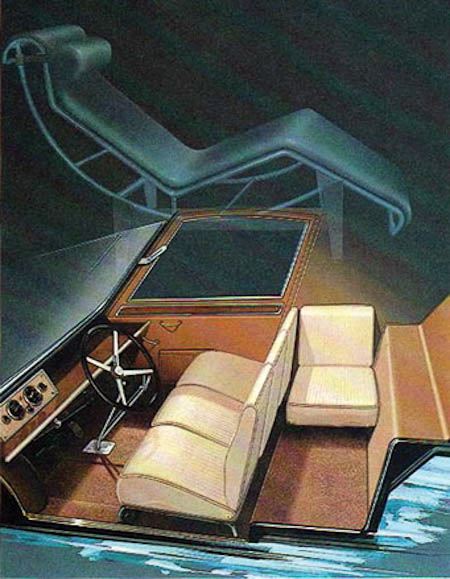 The car was 3750millimeters long, 1850mm wide and about the same in height. As proposed, it had a surprising amount of interior room, with three-abreast seating in the front, and a single, side-facing jumpseat in back for an extra person that could fold down into a camp bed.

There was a luggage compartment, and further space for two spare tyres – a smart feature given the state of European roads at the time. The curved roof had a sliding panel to open in nice weather.

The exterior surfaces were an essay in flat planes, enlivened by the great curving roof. It looked like an early model for a Volkswagen Beetle or a Citroën 2CV, and Le Corbusier often claimed it was the inspiration for both of those iconic vehicles. 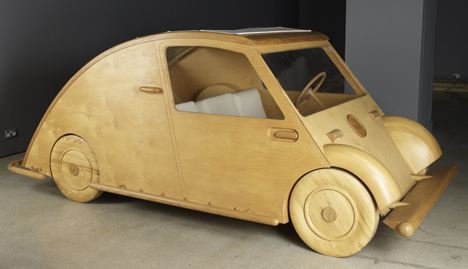 More likely, the architect, who followed the development of the car passionately, managed to tap into the prevailing zeitgeist – an affordable car to replace the extinct Model T, nascent aerodynamics, and other movements in automotive design popular at the time.

Despite Le Corbusier’s best efforts however, the design was not a competition winner, and though the architect tried, he could not sell the idea to a domestic or even foreign manufacturer. The little car’s design seemed destined for the dustbin, remembered by only a few close associates of the architect. 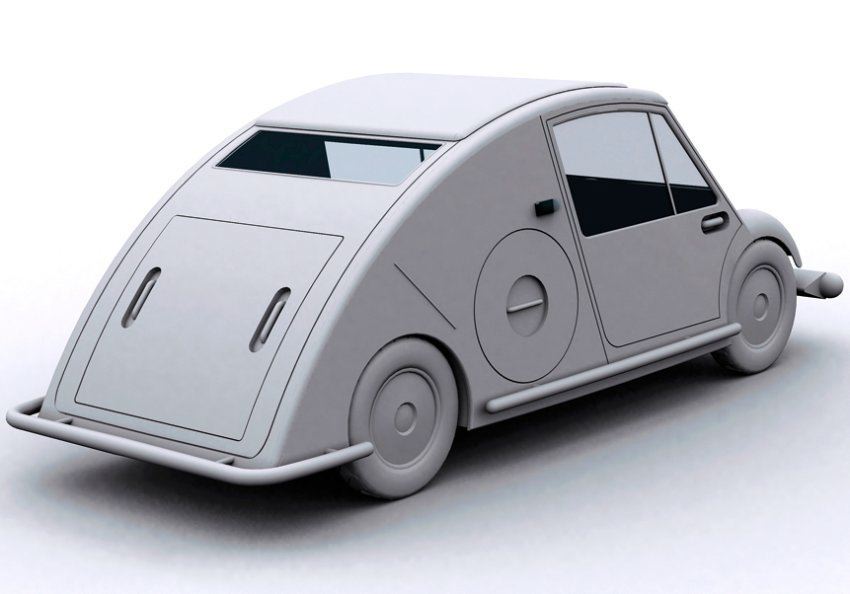 Render of the car’s rear three-quarter

However, decades later, Giorgietto Giugiaro of Italdesign created a full-scale model in 1987 for L’Aventure Le Corbusier: 1887-1965, an exhibition held at the Pompidou Centre in Paris. Giugiaro was fascinated with the little car, noting, “it is so full of inventive touches that even nowadays they are among the most advanced proposals”, pointing out that it was “following the principles of aerodynamics that were sensed long before prototypes were placed in wind tunnels”.

Two years later a similar prototype was constructed to mark the opening of London’s Design Museum. 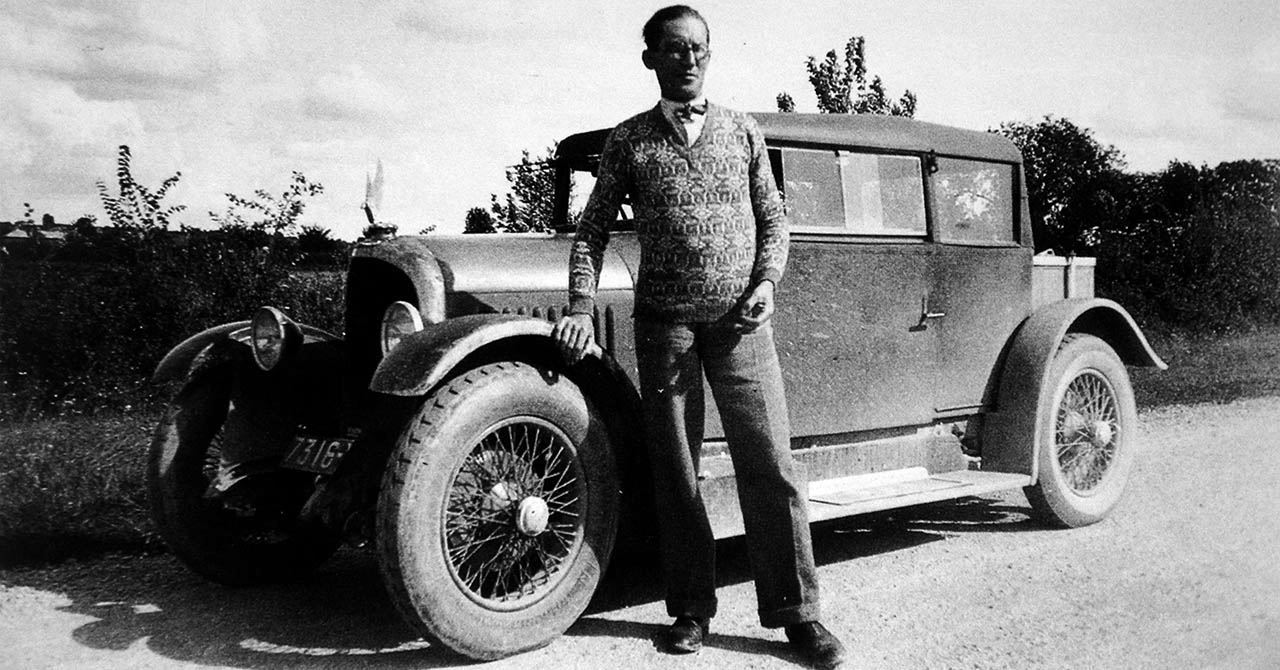 Scholars who study Le Corbusier’s work generally dismiss the Voiture Minimum as a mere footnote in his career. But the architect always considered the little car one of his most cherished projects – a simple, functional car to drive home to the house of the future, that machine for living. 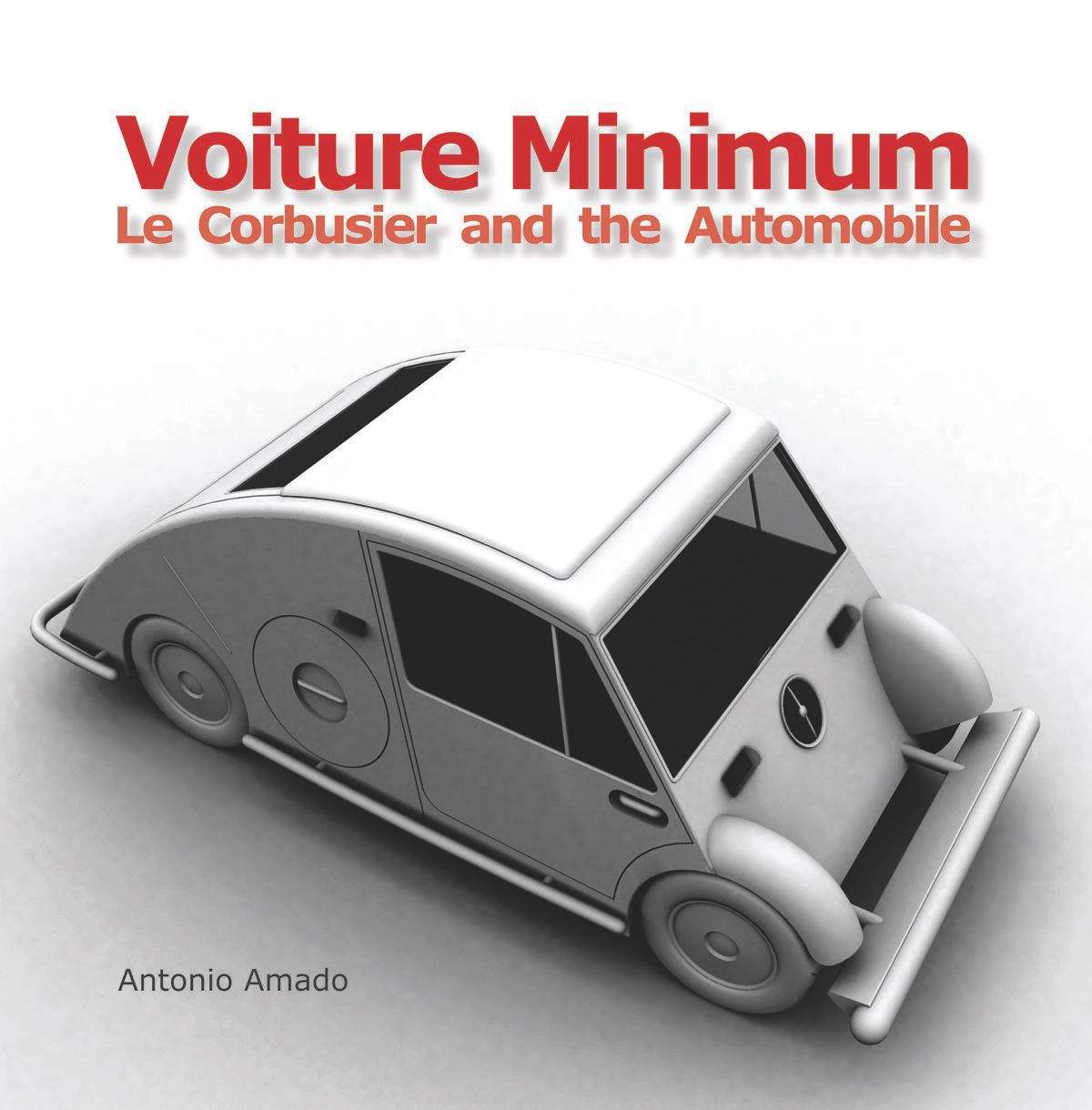 There is an excellent book, published by MIT Press, called Voiture Minimum – Le Corbusier and the Automobile. It offers an excellent history, not only of this project but of automotive history and development between the wars, as well as reviewing the influence of the car on architects and urban planning at the time. The author, Antonio Amado, is a natural storyteller and an architect, and the individual chapters make for excellent reading in themselves.