Concept Car(s) of the Week: The early Ford Fiesta concepts

Looking back on early concept versions of Ford’s flagship supermini

From Wolf to Manx

This week is the 41st anniversary of the introduction of the Ford Fiesta. Now about to enter its seventh generation, Ford has sold over 16 million Fiestas worldwide since its introduction in 1976. Conceived as a competitor to the Fiat 127 and Renault 5, the Fiesta has managed to outlast all its competition for a generation now. But what is often overlooked is how robust a platform the Fiesta has been for interesting concept experiments. 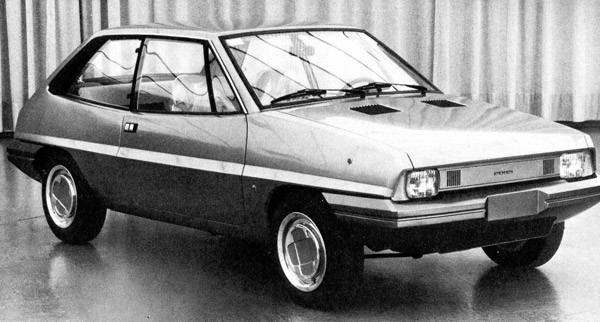 The Ghia Wolf – the ur-Fiesta. Though not as celebrated as others, it remains one of Tom Tjaarda’s finest designs

The Fiesta had its origins in the Tom Tjaarda-designed Ghia Wolf concept of 1972. That project, which created a small car with a crisp modern design, was an exploration into the possibilities and challenges of a B-Segment car. A hatchback coupe and a boxier estate wagon (in 1973) were created, both with the idea of maximizing volume and interior space and also of bringing a modern expression to a supermini. 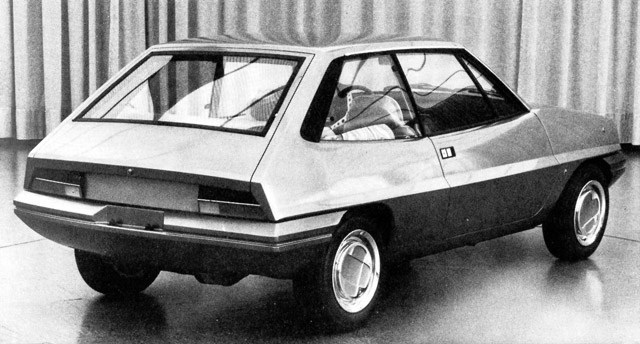 The Ghia Wolf hatchback – smartly tailored with a generous glasshouse 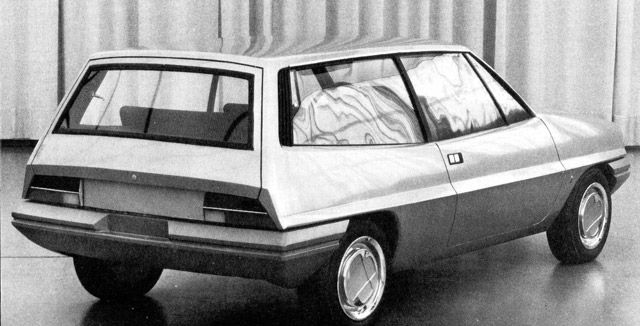 The Ghia Wolf Estate wagon –completed in early 1973, it expanded on the themes of a spacious interior and generous glazing

A careful study reveals the Wolf to be one of Tjaarda’s best designs.  The car was a surprising architectural statement. The trapezoidal glasshouse of the coupe and the glass cube of the estate were generous, sitting over a well-tailored body that saw elements like bumpers and wheelwells smartly integrated into the overall composition. 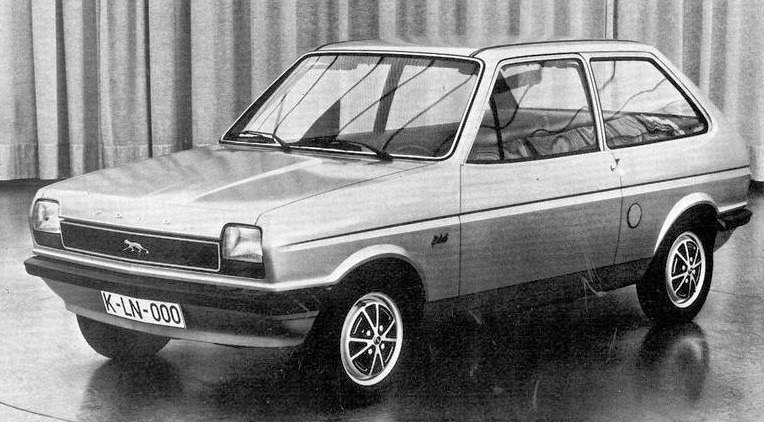 The Ford Bobcat. Note the kitty emblem on the grille. The Fiesta was taking shape

From the Wolf, Ford began Project Bobcat, approved personally in 1972 by Henry Ford II. Ford would spend some 55 million (1972) dollars in its development, the largest sum ever invested in a single car until that time. It was perhaps Ford’s first ‘world car’, intended for multiple markets – including North America – with minimal variations. Also, during the process, the car’s name was changed to Fiesta. Ford’s Mercury Division in North America had appropriated the previous name for its Pinto-based subcompact model. 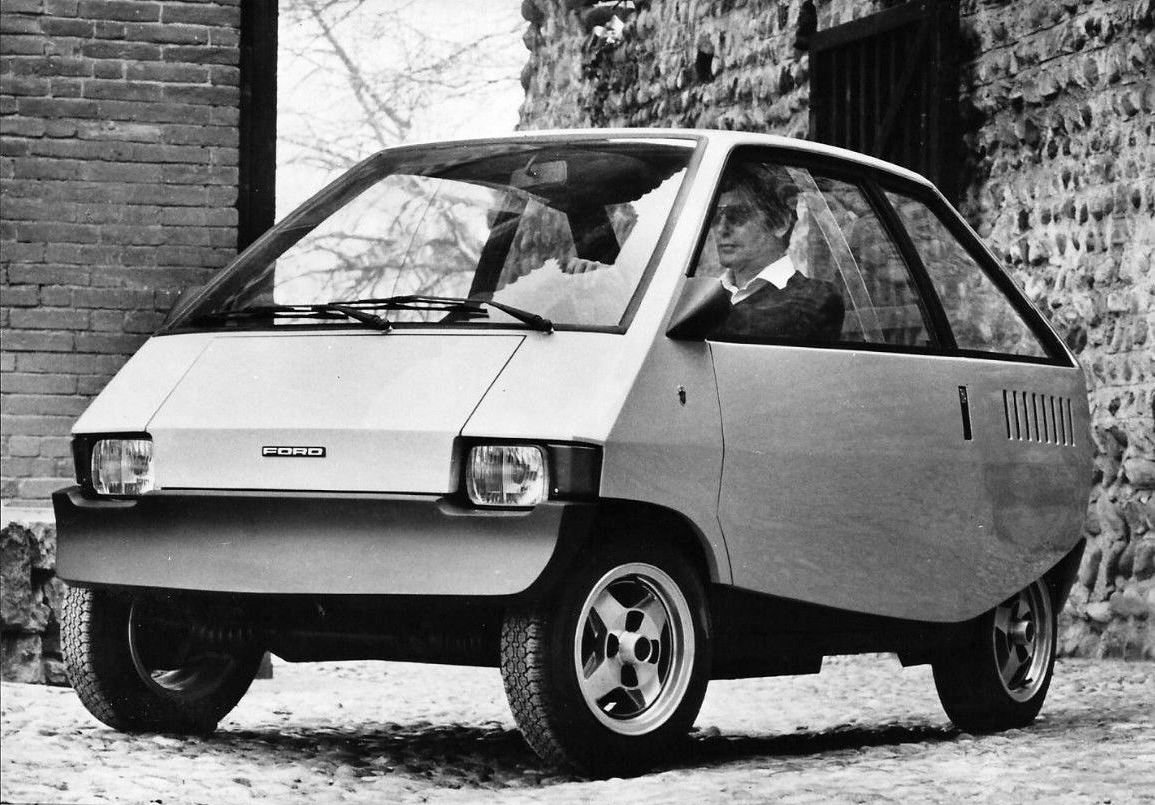 Even before the production Fiesta was introduced, it managed to underpin a concept car. The Ghia Urban, later called the Manx, was a city car concept built on a modified Bobcat/Fiesta platform. At only 2600mm (103 inches) long, and 1400mm (54 inches) tall, the Manx was like a cubist version of the BMW Isetta, with dimensions only slightly larger. And despite its diminutive size and only two doors, the rear-engined Manx could hold four people and a bit of luggage in the ‘frunk’ in front of the driver. 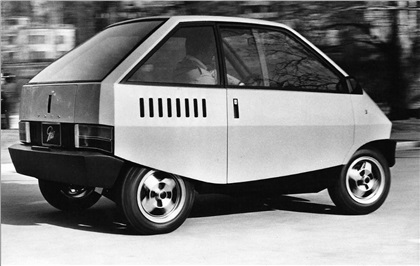 The Ghia Manx – an architectural form for an urban environment

The Manx was architectural in shape, much like its Wolf predecessor. It’s a fitting look for an urban car. Its form might be schematically described as a trapezoid sitting on a cube. The lower part, the cube, is mildly sculpted while, above, the trapezoid is a surprisingly generous glasshouse. 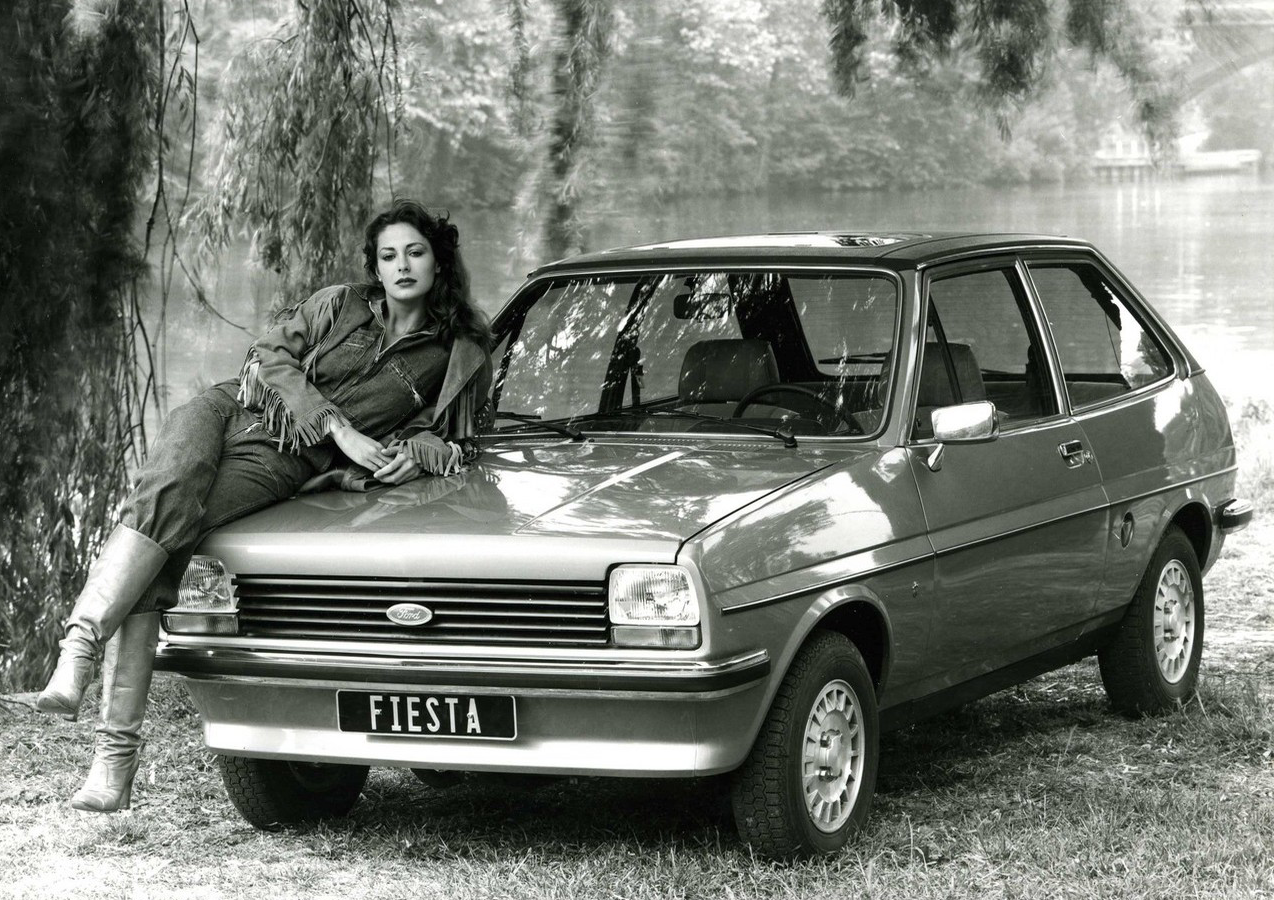 When the Fiesta was introduced, it was met with wide acclaim. It had been a poorly-kept secret for years, and the little car soon received lots of attention and mostly positive reviews. Within 32 months, Ford had sold a million Fiestas, and was well on its way to recouping the Blue Oval’s considerable investment. Still, Ford was a bit uncertain what might lie ahead for the Fiesta. Sales were strong, but there was a sense that there might be untapped potential in the creation of Fiesta variants . And so the first in a long series of concept cars was developed, even as the production car was introduced. 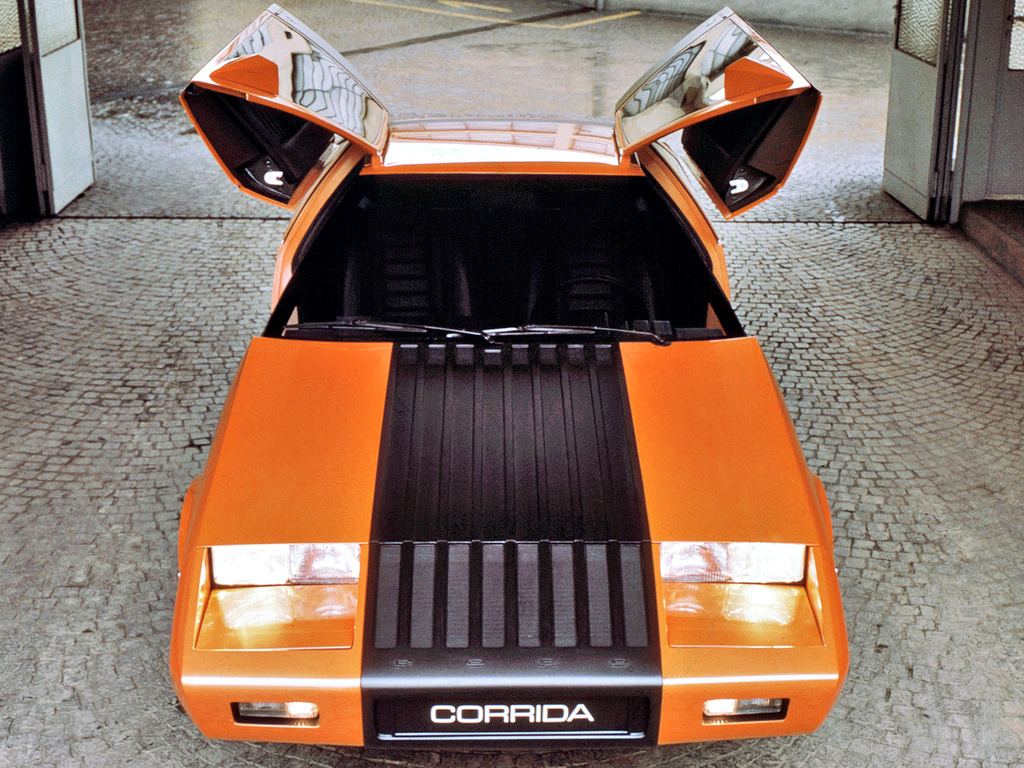 The Ford Corrida – a possible Fiesta-based sports car that, sadly, never moved beyond the concept stage

The first Fiesta concept was the Corrida, a sports car built over standard Fiesta underpinnings. Introduced at the Turin Motor Show in 1976, just after the production model was introduced, the Corrida (Spanish for bullfight), was a ‘what if?’ proposal for a sports car version of the Fiesta. In contrast to the boxy architecture and gentle curves of the production car, the Corrida was a straight-edged, wedgy composition. The front was a long angular snout with headlamps hidden under covers that were hinged in the front. The headlights were deeply recessed in the angular snout. 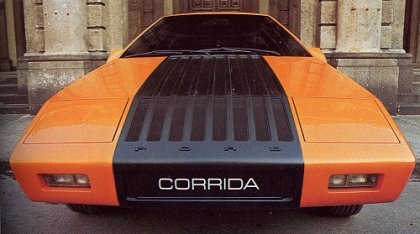 The Corrida had a long snout and a bold front graphic

The most dramatic feature was the pair of gullwing doors, hinged at both the top and middle. These were spring-loaded for ease of use and created a yawning entryway for an easy ingress and egress. The folding gullwing arrangement meant no movable side window was possible. 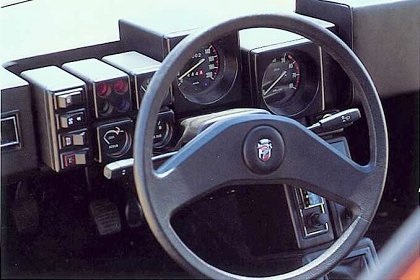 Corrida interior –chunky instrument blocks made up the IP

Inside the Corrida was a pair of sculpturally contoured bucket seats, and the standard Fiesta rear seat – here in a more 2+2 arrangement. The instrument panel was a composition of chunky instrument blocks that, theoretically, could be attached and detached as desired. 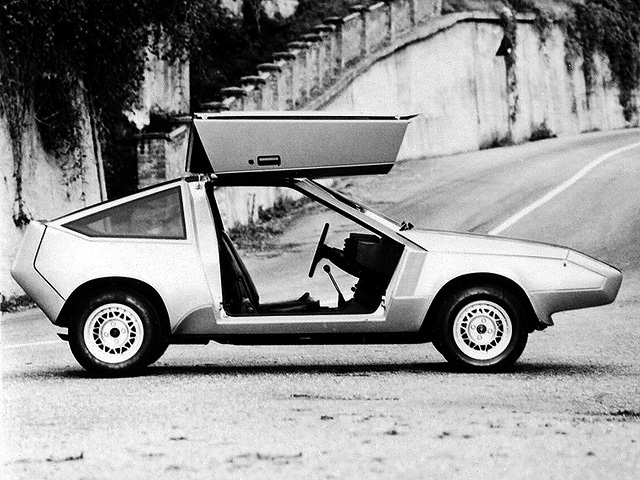 The wedgy, origami-like shape of the Corrida was quite a departure from the standard Fiesta. Note the tailgate at the rear of the car

At the rear, a glass hatchback opened for upper access to the cargo area, while a separate tailgate, containing the rear fascia and tail light assembly, could independently drop down like a truck so that you could easily transport that flatpack settee home from Ikea.

The Corrida had a strong graphic presence, especially with its extended snout

The Corrida, sadly, would not survive beyond the concept stage. But its influence was certainly seen a few years later in Ford’s Mustang RSX concept of 1980, with its wedge design and orange and black colourway. 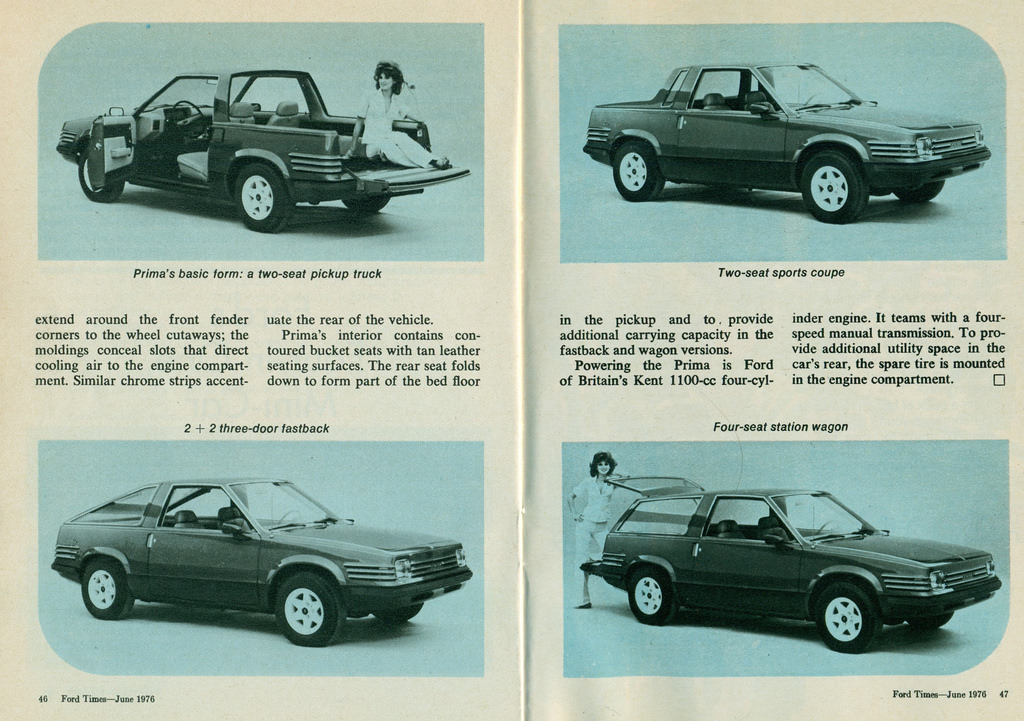 The Prima, introduced soon after the Corrida, was an exercise in a modular car

The Prima, introduced not long after the Corrida, was an experiment in a modular car, and a theoretical proposal for a second generation Fiesta. The basic unit was a Fiesta-based pickup truck onto which different tops could be mounted. The idea was that an owner could buy and mount different tops for different occasions – a wagon for all-weather hauling, a formal notchback coupe for a night on the town, a hatchback for everyday driving, etc. 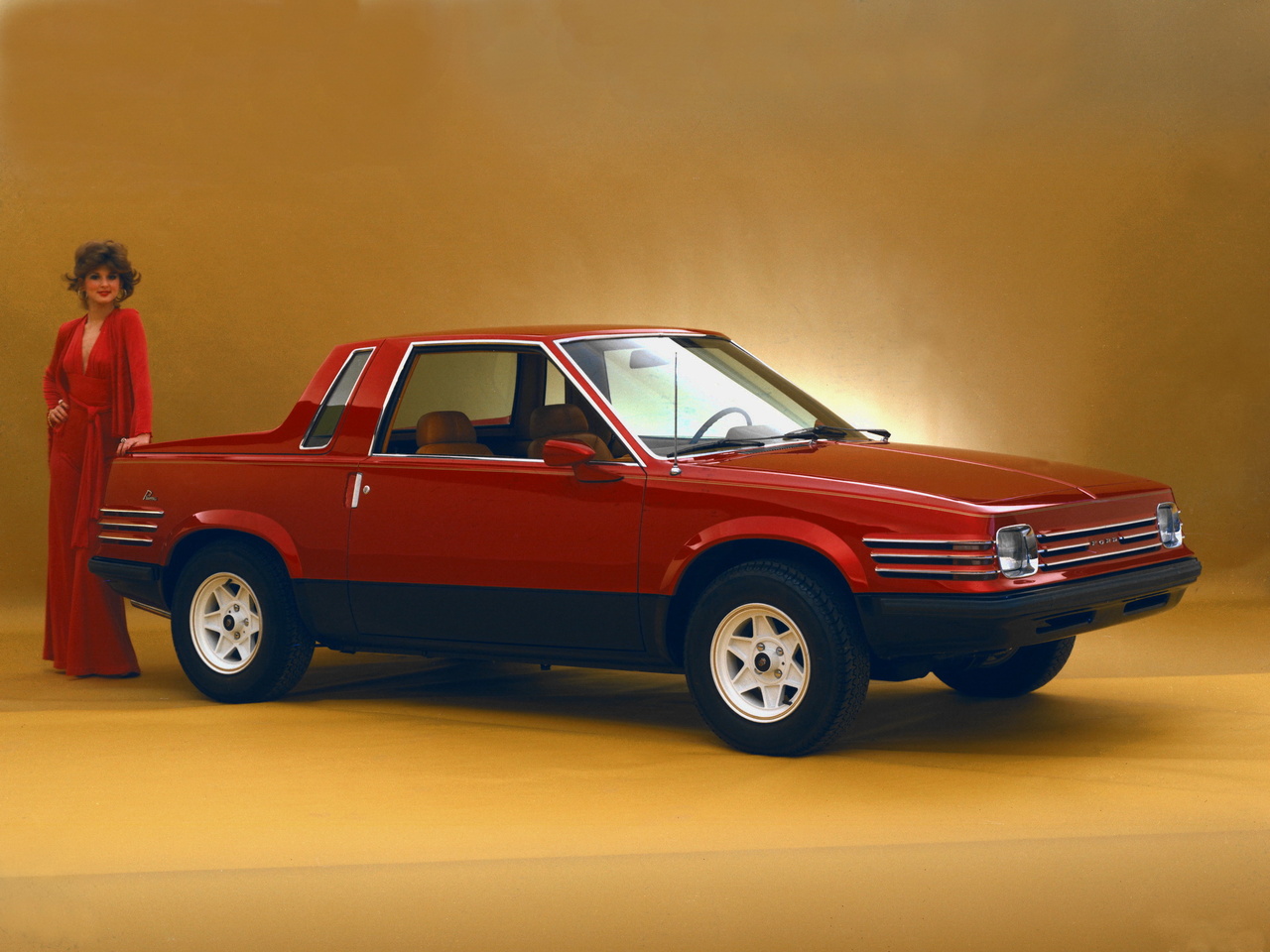 The Prima – chunky styling, animated by louvres. But styling was not the point of this car

The styling was bland, but still showed a degree of resolution for the many roles the car would be expected to play. Its chunky massing, louvred trim, ventilation and light covers and rectangular headlamps vaguely suggested a Lego-like modularity. But it wasn’t styling that drove the design of the Prima, it was the shape-shifting capabilities that the roof modules suggested.

The Ford Fiesta emerged from one concept car program and then gave birth to a host of others. The concepts of those early years probed new directions for the supermini to explore. The Corrida is clearly the most exciting of this group. One can imagine that with some styling and powertrain updates, this car could find a place in the market today. 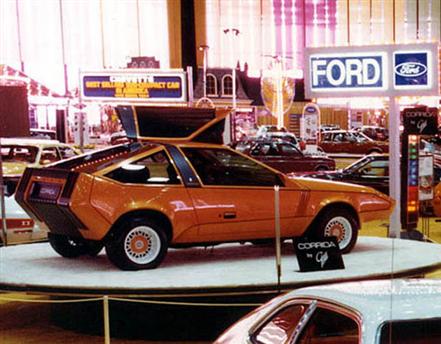 The Ford Corrida at the Chicago Auto Show

Perhaps the most significant of these concepts, besides the Wolf itself, is the Manx. Its packaging speaks to issues surrounding city cars today, and its simple massing and surfacing is quite a departure from the overstressed modeling of some current cars in the market. 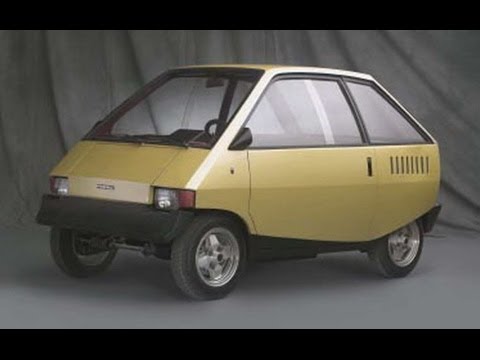 The Manx in gold and black colourway

The Prima, which was never a classic design, has not aged well. Although the concept of a modular car can still intrigue us, the opportunities offered by 3D printing and mass customisation seem the technologies to pursue as we look into the future.

But each one of the Fiesta ‘freshman class’ of concept cars speaks to issues that still inform the design of superminis today. What are the potentials for packaging and form? What is the best styling expression of an urban car? Could there ever be a true shape-shifting car, flexible in its architecture, according to our needs?

Perhaps the Fiesta could still form the basis of some more interesting concepts that will challenge our thinking of what a supermini could be in the 2020s and beyond. 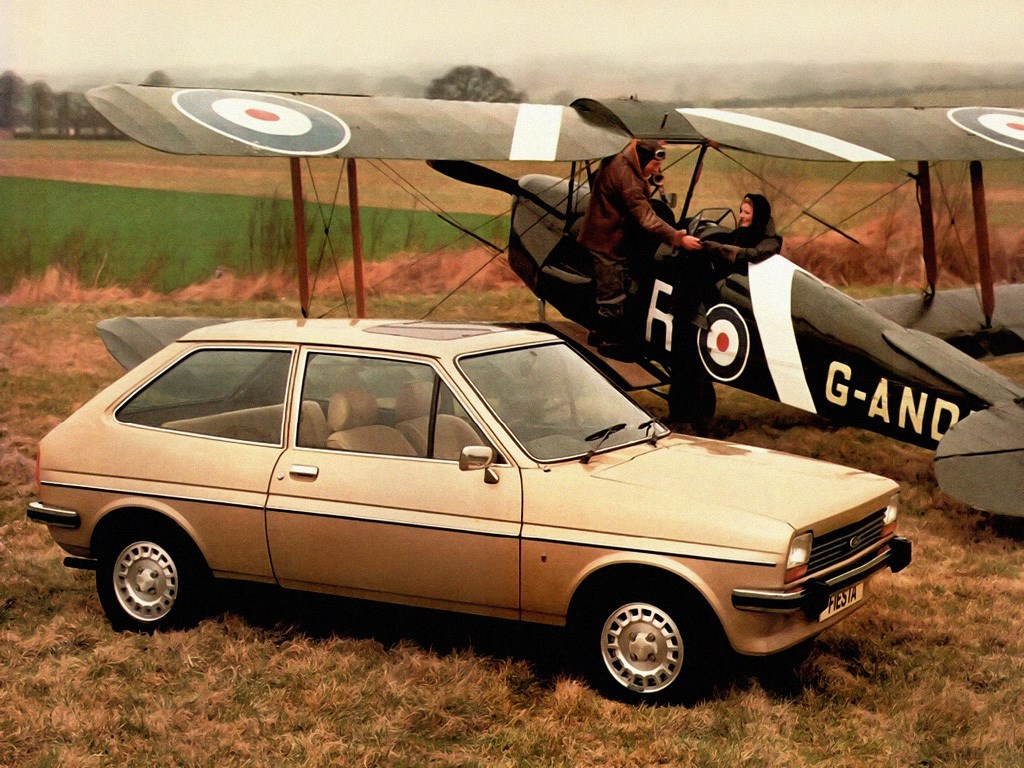 Still interested in Fiesta-based concepts? See our piece on the Ford Zig and Zag.