Truck concepts are tricky assignments. While car concepts, given generous imagination and even more generous funding, can veer way into the realm of science fiction, trucks are grounded in utility. They not only have to be something interesting, they have to do something practical. 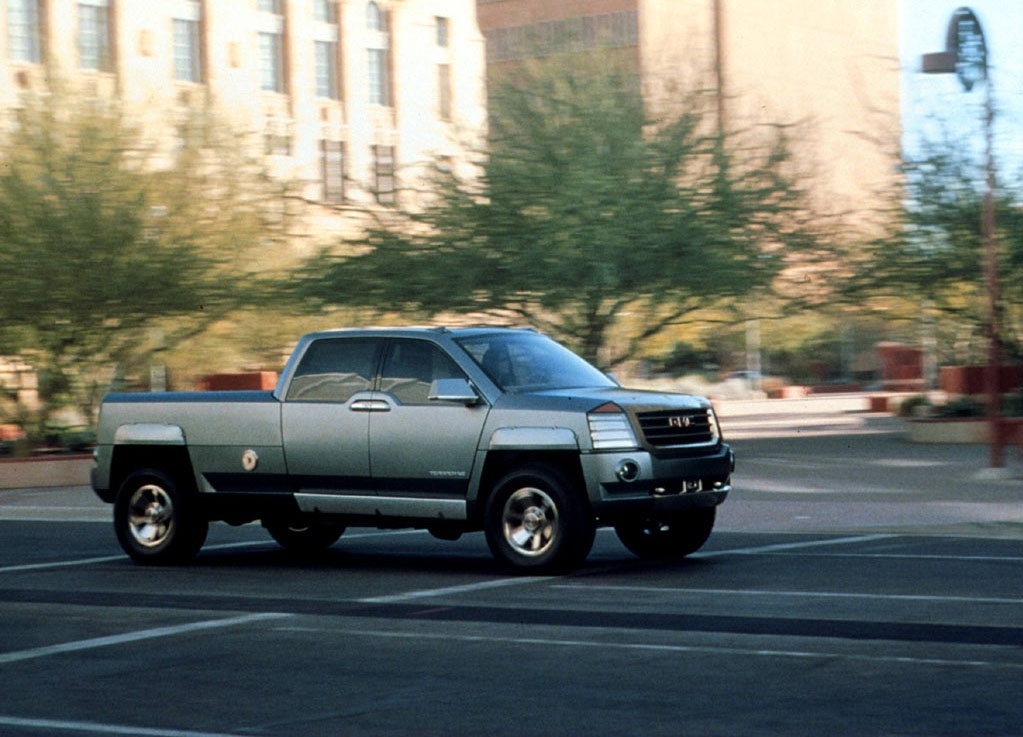 GMC, General Motors light truck division, has been the place to go for hard working utility trucks for over a century (unless you need your grille badged with a blue oval). With a strong practical bent and little tolerance for frivolities such as styling exercises, the division has been largely content to leave blue-sky thinking to other divisions.

The notable exception, way back in 1955, was the L’Universelle, a utility truck in the Motorama era that was notable for its porcine massing and innovative packaging. 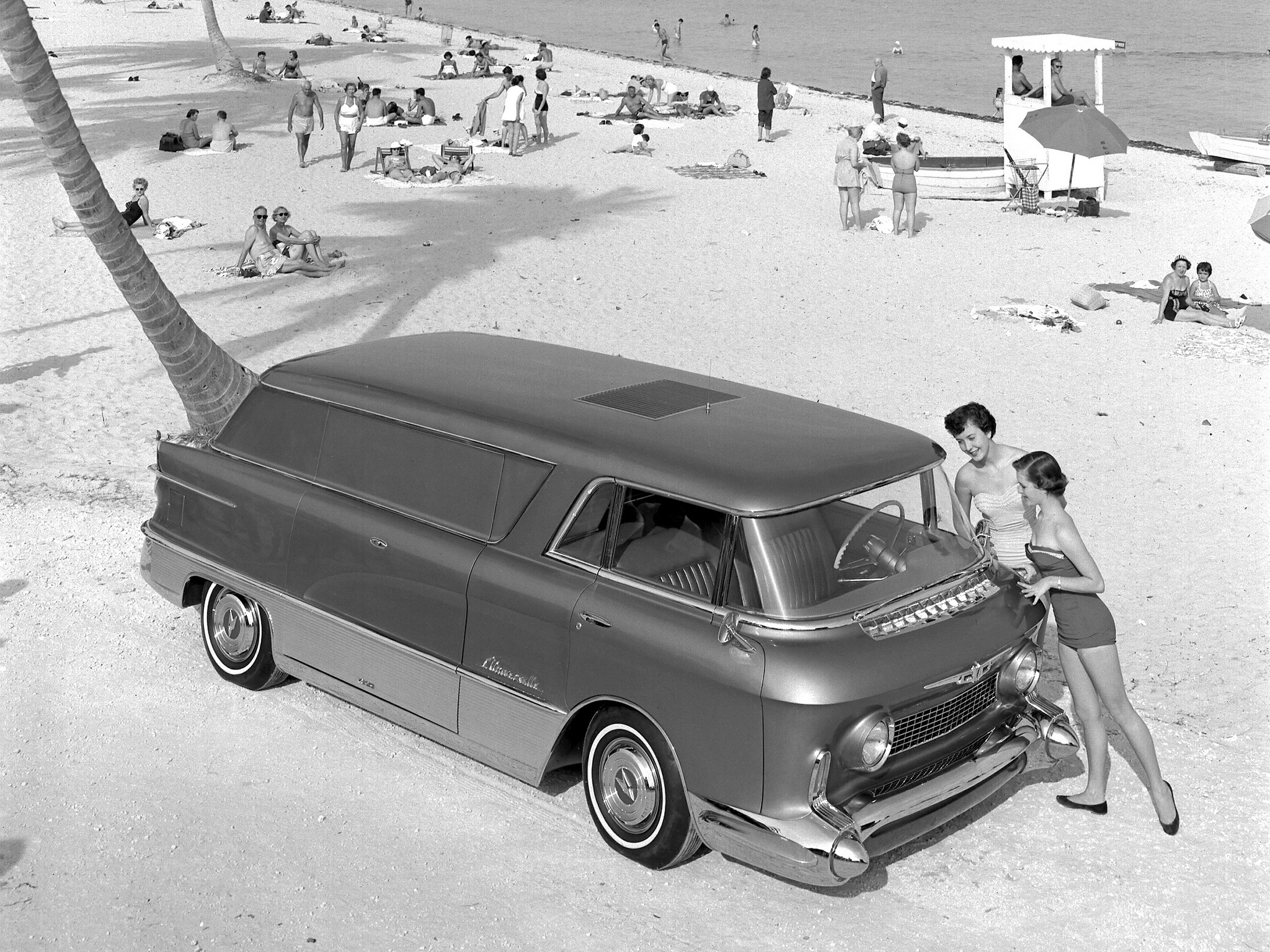 1955 L'Universelle was homely, but innovative in drivetrain and packaging

At the 2000 NAIAS in Detroit GMC introduced a concept truck for the near-future, one that not only reflected trends of the time, but looked forward to truck usage in the near future, which as it turns out, includes our time as well. The name Terradyne was a combination of ‘Terra’ (Latin for earth) and ‘Dyne’, which is Greek for ‘strength’, or ‘power’. 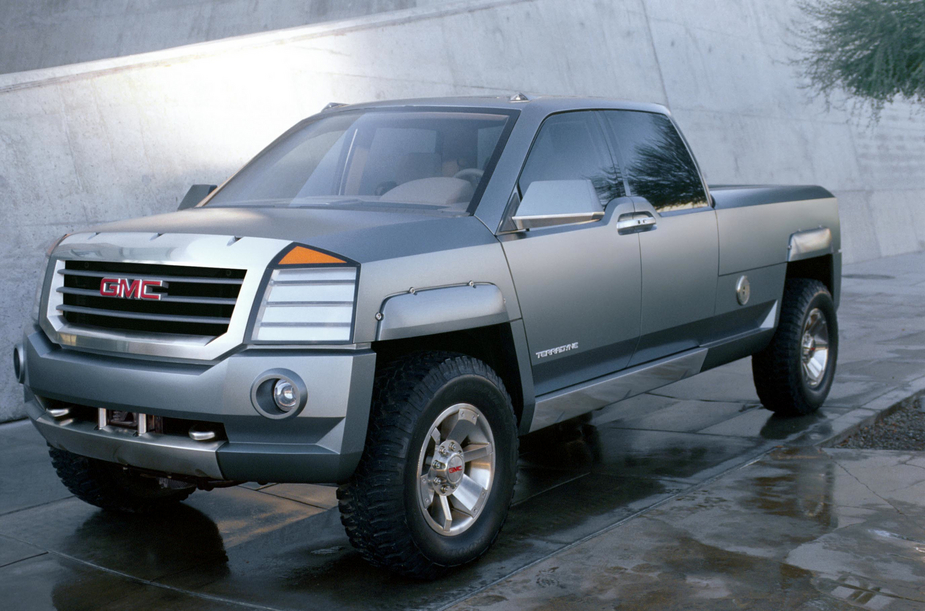 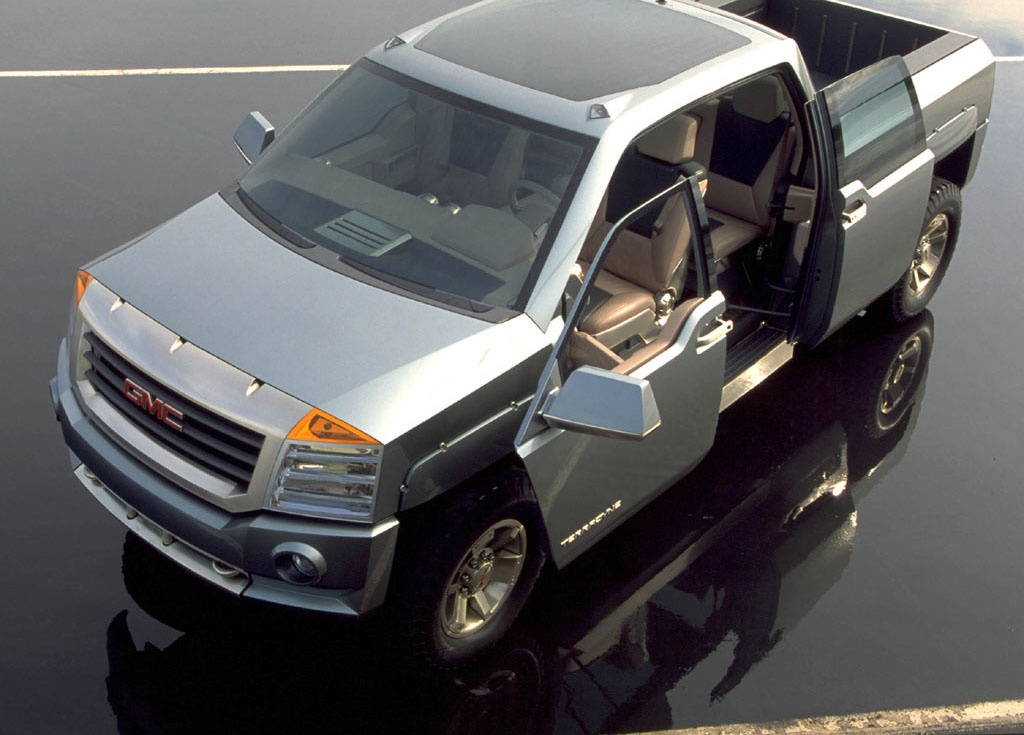 Toward this end, GMC designed the Terradyne for increased manoeuvrability and ease of ingress and egress. The cab height was raised two inches and moved forward for better driver visibility. Pantograph doors opened forwards and rearwards like train doors to give full access to the cab. A step descended when the doors were open. 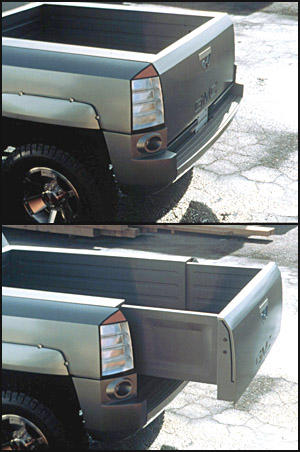 Just in case your child decides to start playing drums...

The cargo bed was six feet (standard ‘short bed’ dimensions), but had a ‘drawer’ extension that would pull out for a full eight feet of bed length. The Terradyne was also first to feature GM’s signature ‘QuadraSteer’, a four-wheel steering system which allowed amazing turning dynamics in a large vehicle. This was coupled with a back-up camera, almost unheard-of in a truck concept of the time.

Carl Zipfel, GMC design manager, described the massing and styling of the Terradyne as “billet cut styling,” which emphasized “clean, bevelled forms” and which “draw precise lines around strong, solid volumes.” There is a certain solid cohesiveness, as if the whole body was milled from a solid block – appropriate for such a vehicle.

The Terradyne featured a unique ‘cab forward’ architecture, which along with the short bed, made it seem smaller than its full-size dimensions. 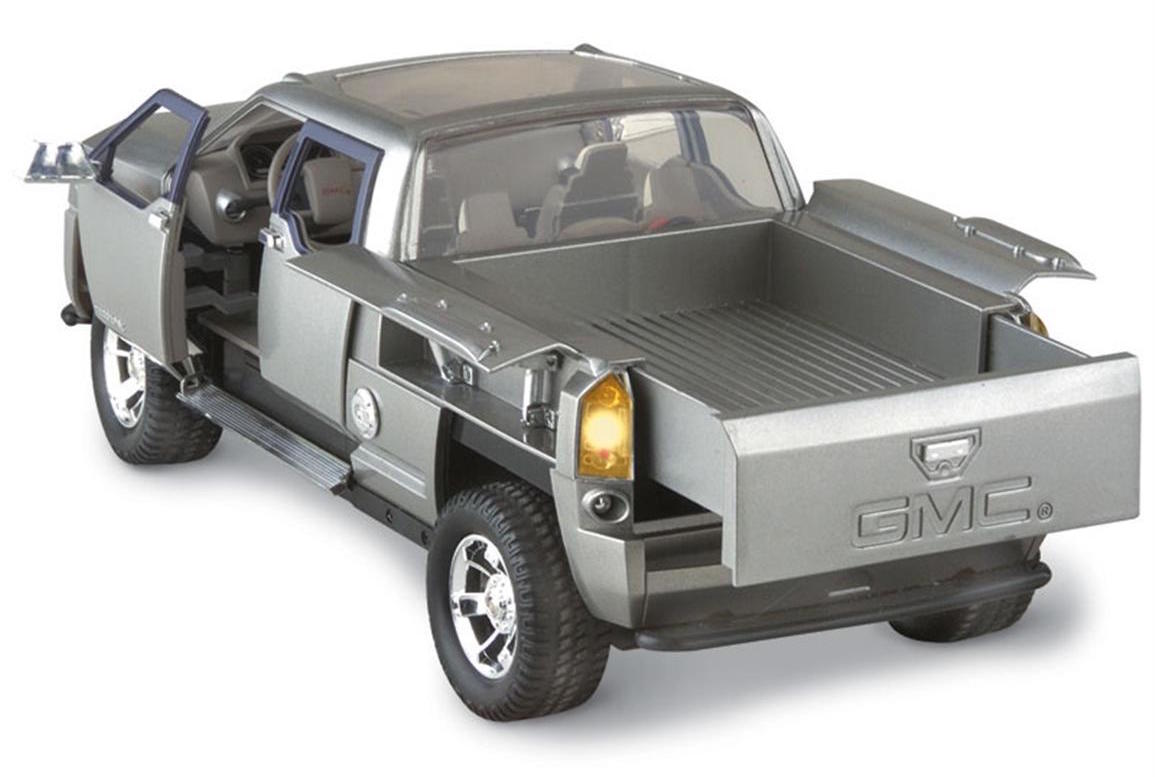 Clever storage features throughout the Terradyne

As mentioned above, the short bed has a drawer that can extend its length from six feet to eight while above the rear fenders, clever built-in boxes were designed to hold tools and accessories. 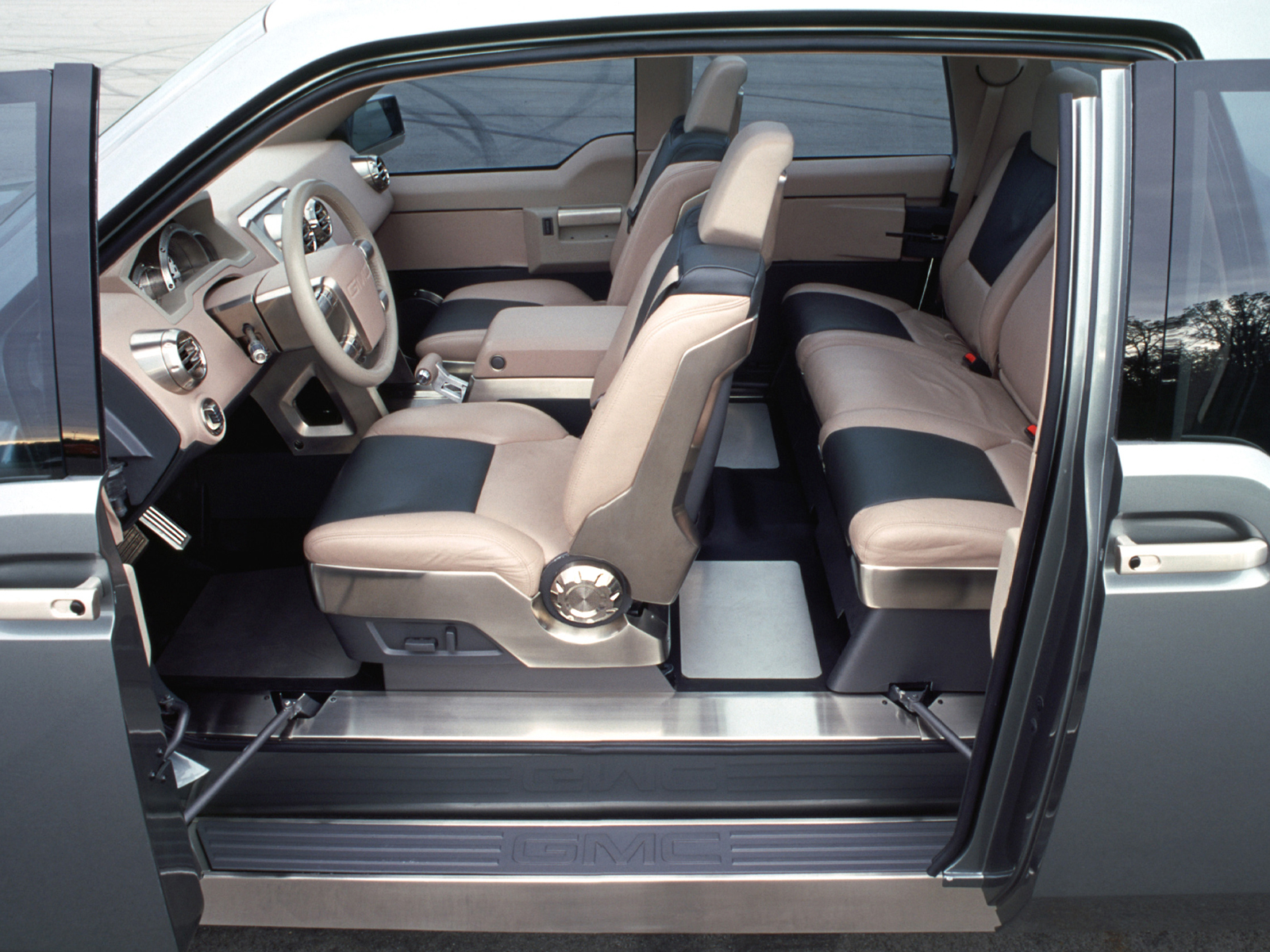 The pantograph doors opened to reveal a spacious cabin that looked even more generous than one would expect in a full-size luxury truck. Much of this was due to the lack of a B-pillar, which allows a huge open area not only for loading passengers, but also whatever freight the Terradyne might need to haul in the cabin. 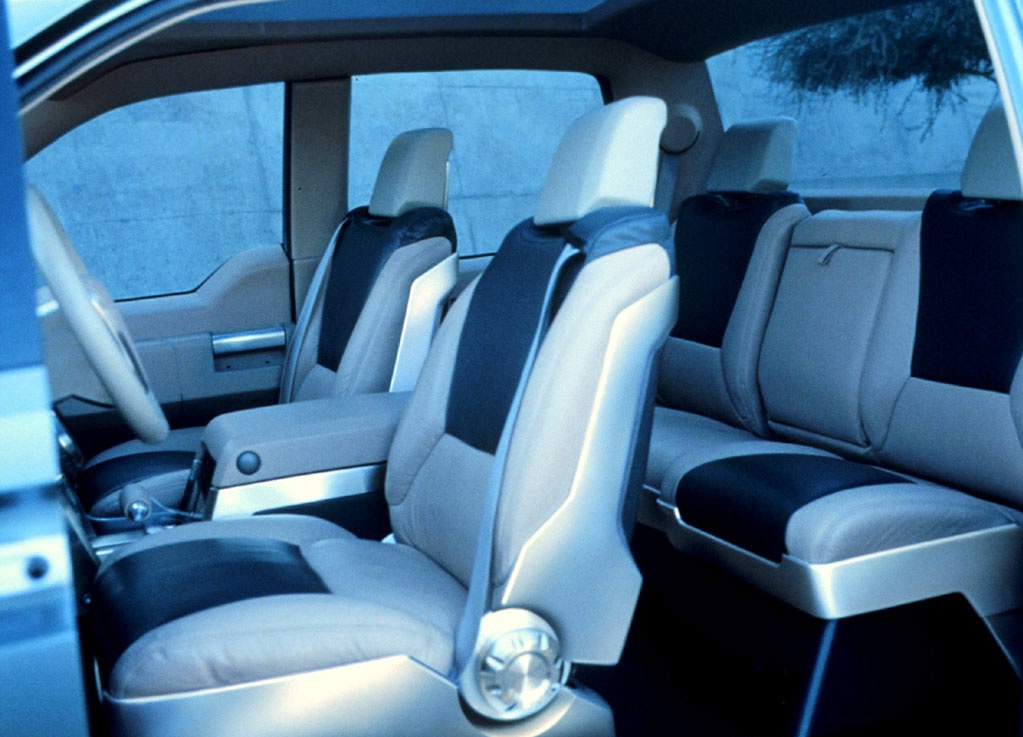 The seating was generous and reconfigurable, taking advantage of the volumes created by the higher, forward cab. Electronics dominated the IP, along with a console-mounted Compaq laptop that would allow the Terradyne to act as a mobile office. 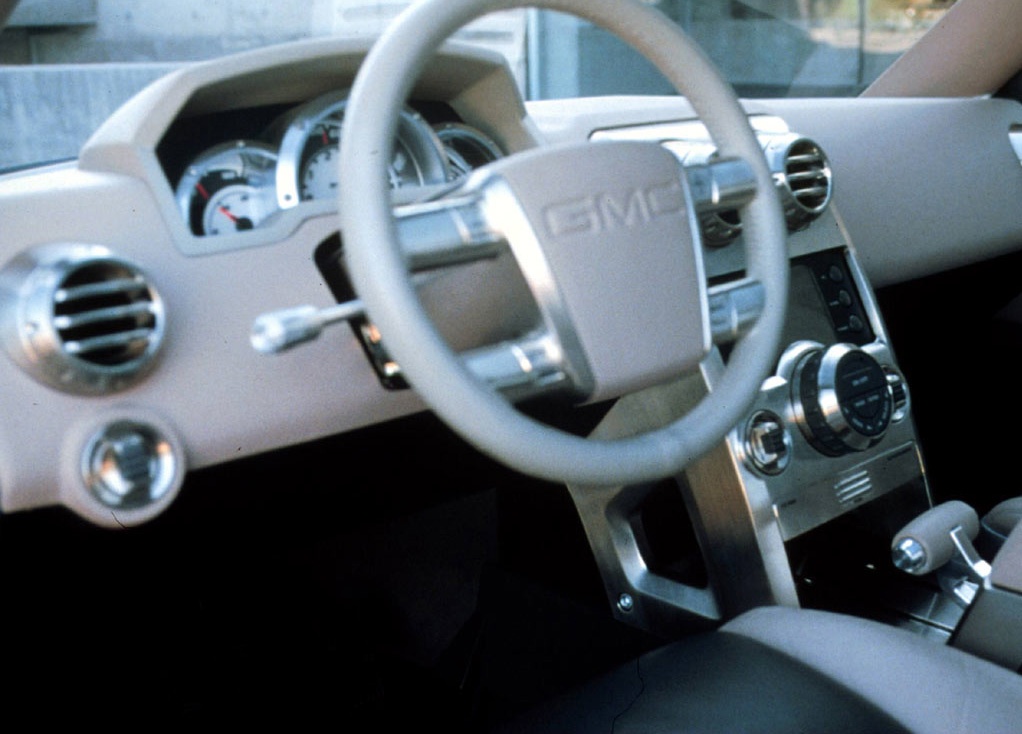 Terradyne’s instruments and controls had a dieselpunk vibe

The Terradyne was powered by GM’s Duramax 6600 diesel engine and a heavy-duty Allison transmission designed for towing. What was unique, however, was the engine-powered 5kW generator, which could provide temporary power to a house, or to a bunch of tools at the job site. Electrical outlets in the tailgate made for an easy hook-up, even if you just needed to charge your electric car. 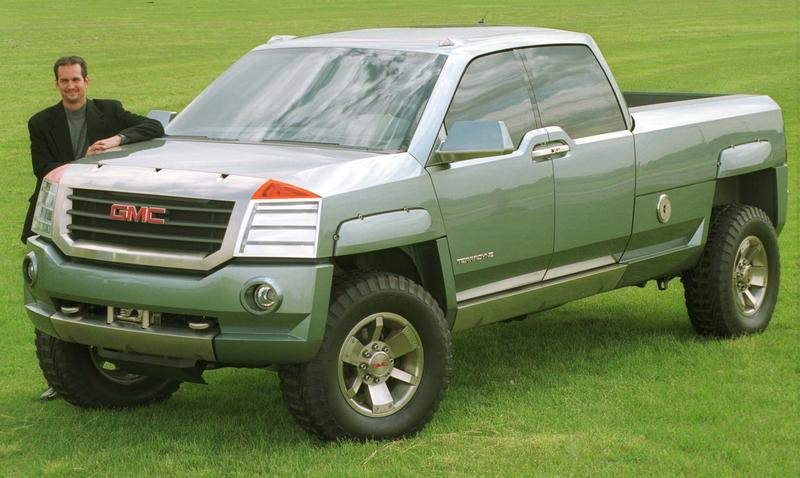 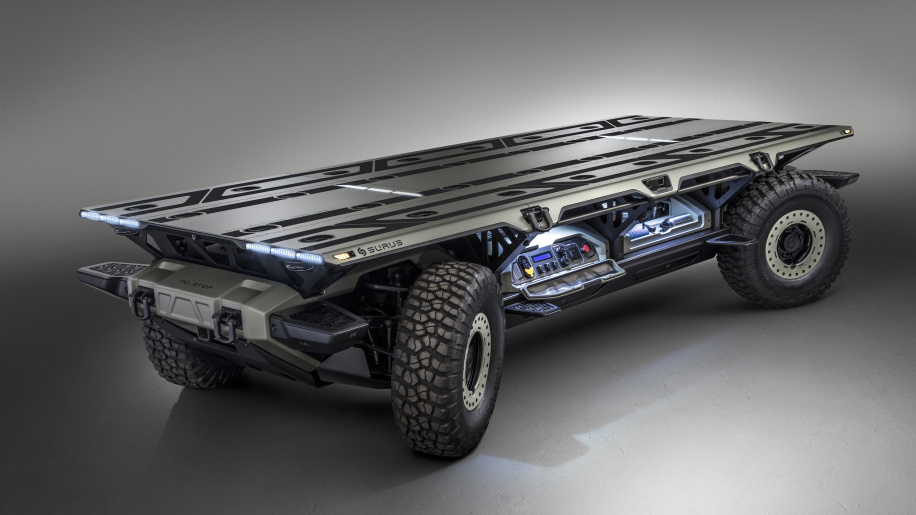 Meanwhile, General Motors continues to consider the future of the truck, most recently with its SURUS concept. Meant for heavy cargo or military usage, the ‘truck’ is actually a Hy-Wire-style hydrogen fuel cell and lithium-ion battery-powered rolling platform, which could have a cab attached to create a traditional flat-bed truck, or perhaps act as a self-propelled trailer that is part of a larger caravan of trucks. It can also be a mobile power station, like the Terradyne. Unlike the Terradyne, though, the SURUS exhaust produces only water, so its byproduct could be purified for drinking. 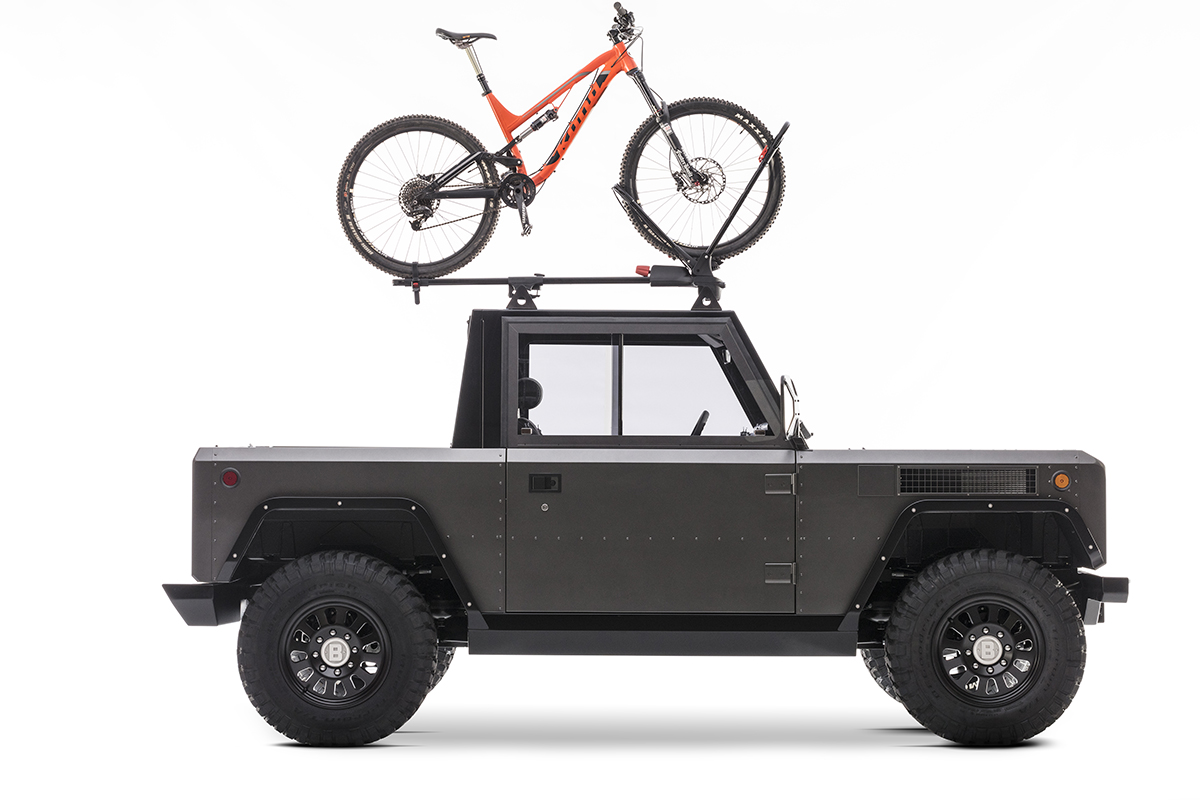 The electric Bollinger B1 – the future of the pickup?

As for the future of the consumer pickup, we might look to American start-up Bollinger and their B1 truck. With electric power, a flat floor and wheel-mounted motors, this no-frills truck with its blocky massing and minimal styling harks back to Land Rovers of old, and to the toy trucks of our youth. Like the SURUS, and to a lesser extent the Terradyne, the B1 takes advantage of powertrain innovation to revisit the fundamentals of packaging and utility. 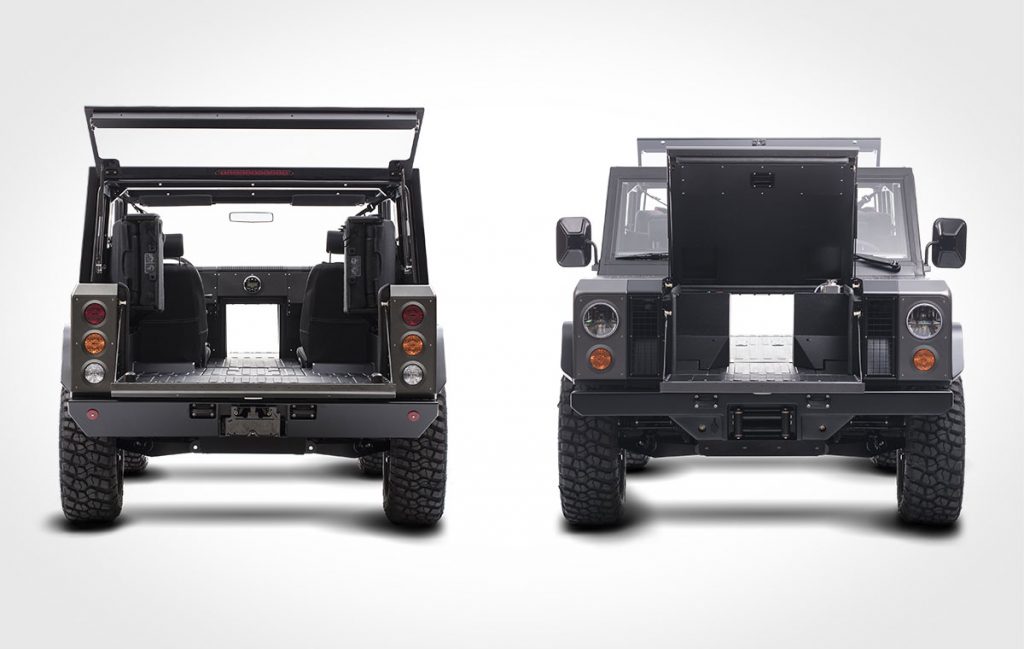 The B1 cleverly takes advantage of its lack of combustion engine

The Bollinger puts the traditional OEMs on notice by showing that the traditional pickup space has lots of room for innovation. The Terradyne, in its own way, did too, but the Bollinger is more radical, more fundamental. It has an elemental quality to it, like the Model T. You have the sense that its designers drilled down to the very essence of a utility vehicle. GMC, along with every other truck manufacturer, should take notice. 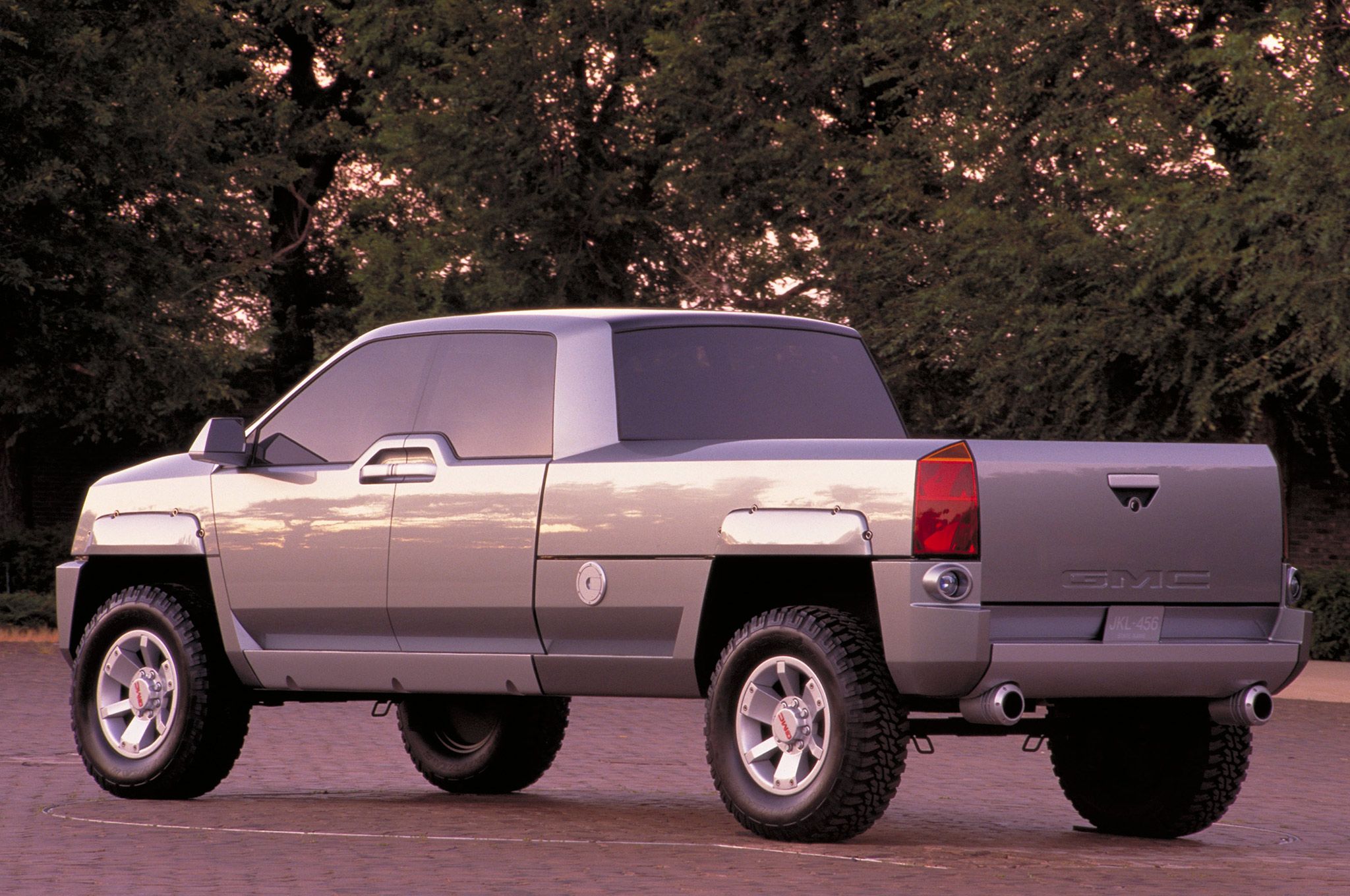