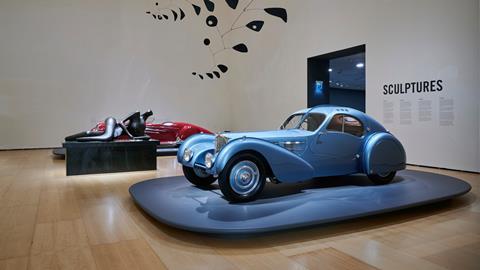 Curated by architect Norman Foster, Motion: Autos, Art, Architecture at the Guggenheim Bilbao is an visually stunning and elegiac tribute to the golden age of the automobile

The car is the most influential design object of the 20th century. A great liberating force, it purged city streets of the pungent detritus that went with the era of the horse, reshaped cities and mobilised populations. But times have changed. In today’s world of swelling urban demographics and gridlocked streets, the car, much like the post-war generation that embraced it, is now seen as a roadblock to progress on climate change. It is the great polluter – the liberator turned oppressor. The car’s oft predicted end, however, is far from a done deal. Though cities across the developed world would prefer to see cars driven out of the urban realm and are concocting policies intended to do just that, for many of us life without one would be impossible. 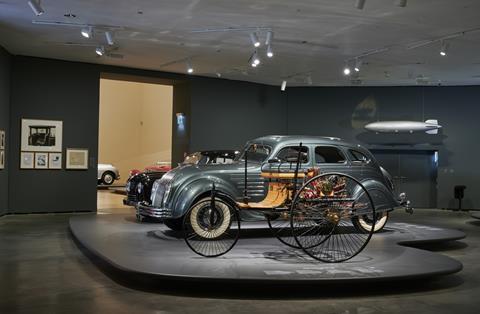 From horseless carriages to Jazz-Age curves

And so Motion: Autos, Art, Architecture held within the rippling steel form of the Guggenheim Bilbao is both completely of its moment and one that flies against the prevailing winds. The story of the car is the story of the 20th century – curator Norman Foster, at 86 the UK’s greatest living architect, described the exhibition as a requiem to the age of combustion. And though there are some truly jaw-dropping machines on display, the attempt to join the car, on the evidence presented here the pinnacle of industrial design, to the art and architecture it inspired and took inspiration from adds a very necessary extra dimension.

Taken in sequence the 7 sprawling rooms – Beginnings, Sculptures, Popularising, Sporting, Visionaries, Americana and Future – are packed with all manner of cars (40 if you are counting): from early wheeled boxes to sinuous futurist beauties, Jet-Age improbabilities and everyday transport. Many of them have never been released by their private owners, and a handful, the 1953 Bentley R-Type Continental and the 1925 Voisin C7 Lumineuse designed by French aviation pioneer Gabriel Voisin are from the Foster Family collection. The latter is one of those early wheeled boxes that heralded the dawn of mass individual transport.

The wind tunnel revolutionised automotive design – it seems incredible that under a decade later cars went from little more than motorised stagecoaches to what Arthur Drexler described as “hollow rolling sculptures”. A breathtaking quartet of these moving artworks are arranged around Henry Moore’s reclining figure in Sculptures while an Alexander Calder dangles above. 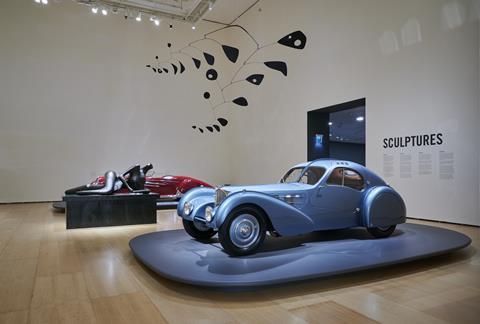 Though the link to both Moore and Calder an element of ‘because we can’ from the curators the juxtaposition underlines the point that the curvature of the Hispano-Suiza H6B Dubonnet Xenia or Bugatti Type 57SC should be regarded as works of high culture. And as well they might. Crafted by hand, they are to the Fordian vision of democratised mass transport as a Vauxhall Cavalier is to the Voyager satellite.

Popularising moves the story into the inter and post-war period with a cheerful collection of characters: Fiat 500, the Renault 4, the Citroen 2CV Sahara, and of course the Mini. Austerity shrunk the product while enlarging the audience. The touchstone was the Volkswagen Beetle, Adolf Hitler’s car for the masses subsequently adopted by surfer types, Ted Bundy and Goldie Hawn. Hitler’s vision was realised by German Jewish car designer Joseph Ganz has a peculiarly grim irony and marks the exhibition’s rare foray into the political arena. Also present is architect Le Corbusier’s Voiture Minimum, which is and always has been charmingly crap.

Futurism, uncoupled from its dark political backdrop but not its embrace of the car as a ‘the vehement god of a race of steel’, still has astonishing visual power

As motor racing hit top gear, the technological advances needed to produce ever greater velocity found their way into road going sportscars, marking a divergence in approaches to car design. The new way found its ultimate expression in cars like the Jaguar E-Type or the Aston Martin DB5, which is as much a part of James Bond lore as Sean Connery. 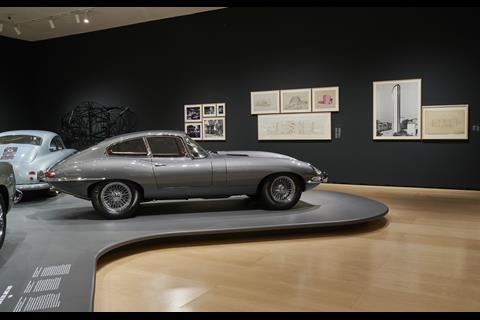 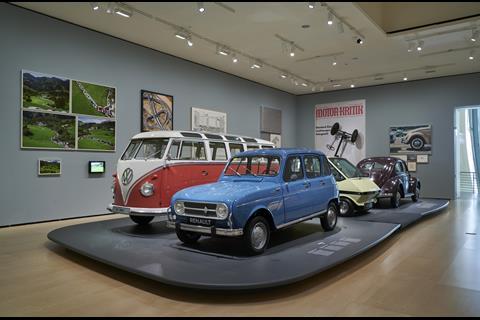 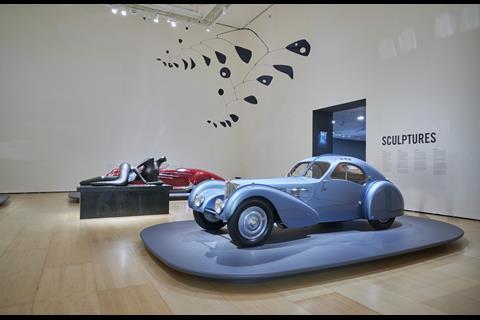 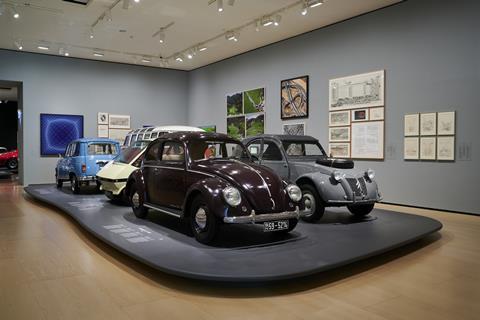 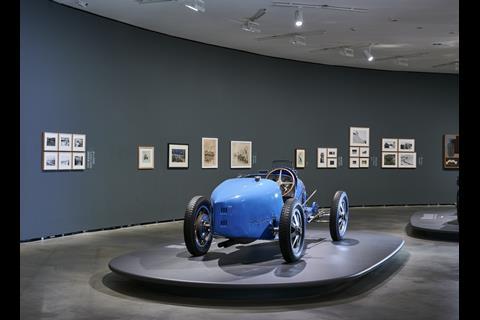 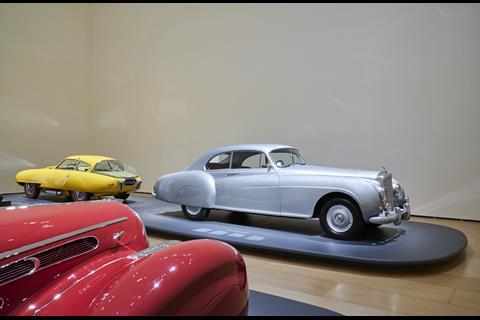 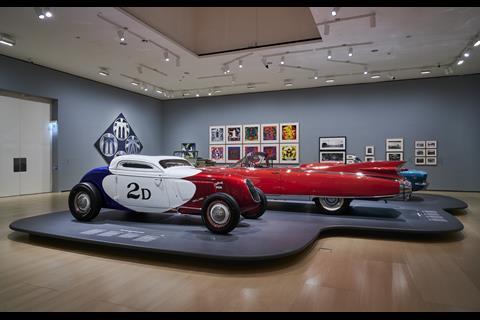 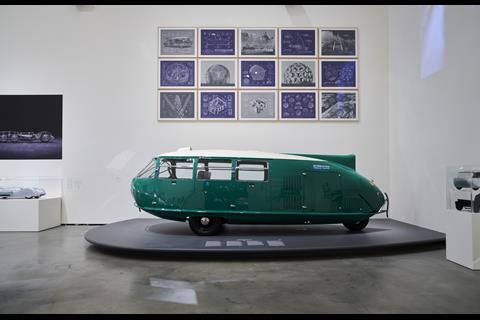 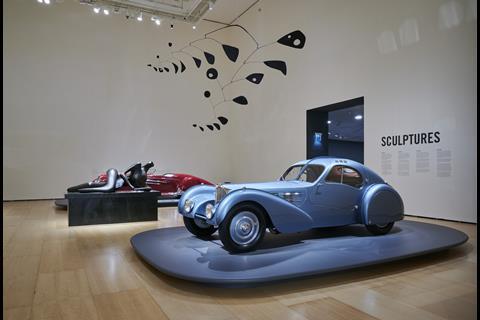 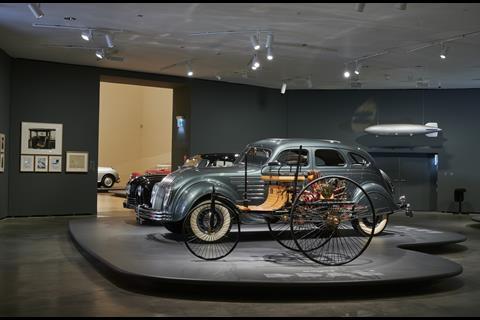 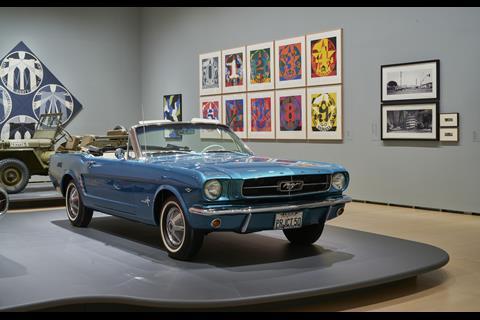 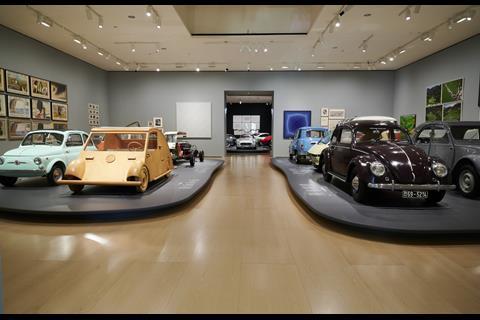 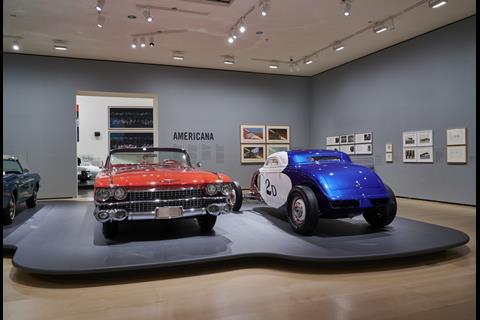 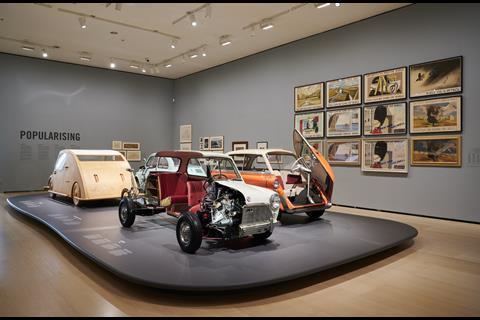 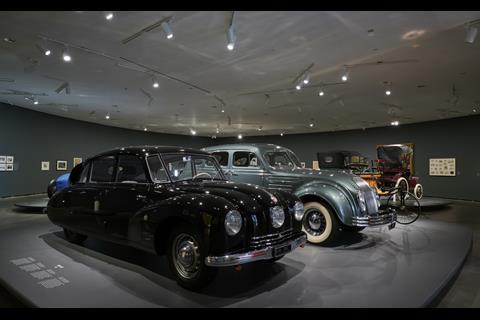 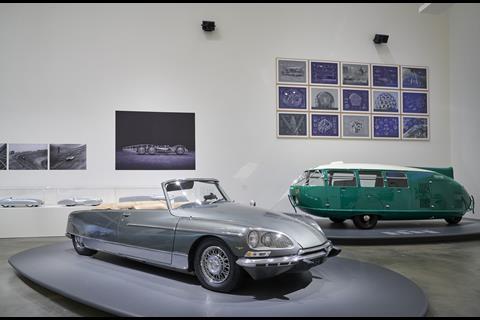 Gio Ponti’s Pirelli tower – the great icon of the Italian Economic Miracle of the 50s and 60s – and the dynamic graphics of the tyre companies advertising campaigns captured an idea that industry could acually improve society rather than destroy it. Belief in the machine has its roots in the first great artistic movement of the century, Futurism, uncoupled from its dark political backdrop in Visionaries but not its embrace of the car as a ‘the vehement god of a race of steel’, still has astonishing visual power. Marinetti’s Velocita di motoscafo reverberates with expansive energy while the streamlined form of Tullio Crali’s Le Forze della curva (The Forces of the Bend) is thrillingly intense. Both paintings overlook the Lancia Stratos Zero concept car from four decades later, itself bordering on an abstraction as designer Marcello Gandini sought to distil the ‘vehement god’ into its purest form.

There is also a triumvirate of Jet-Age beasts, General Motors Firebird series – turbine-powered, bubble-domed utopianism, which was met with scepticism even amid the technicolour optimism of the 1950s. Implausible yes, but these visions of the future seem a great deal more fun than the automated pods that dominate current futurecasting.

The machines here have an indefinable quality – there are the progeny of a less complex and more optimistic time. Flawed yes, but undoubtedly worth celebrating

That optimism, born from booming post-war America, which reconfigured its entire society around the automobile, is captured in Americana where the car and its surrounding mythology meet. Wyoming (Train and Car) shot by Elliot Erwitt in 1954 strives in its bracketed title to reserve judgement, but in placing the car alongside a steam train, there was only going to be one winner. The romance of the trip – an American rite of passage – is embodied in elongated tail fins and dual ‘bullet’ lights of the 1959 Cadillac Eldorado Biarritz. Missing is the representation of the car on film, which feels like an oversight. 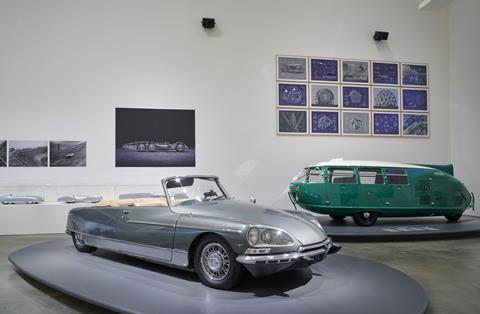 And so to Future, which sees 16 universities from across the world speculate on what the world may look like in 50 years time. The work features infrastructure brought on by climate change, autonomous pods, flying vehicles and urban design. Predicting the future is of course impossible, but on this evidence the car as we know it is destined to become an exhibition piece. Indeed, it is tempting to see the decline of the automobile as emblematic of the decline of the West. With a few exceptions, there is little to touch a Citroen DS 21 for example in terms of contemporary European or American automotive design. Beyond that uncomfortable truth, the machines here have an indefinable quality – there are the progeny of a less complex and more optimistic time. Flawed yes, but undoubtedly worth celebrating. Motion: Autos, Art, Architecture is an irresistible swansong.