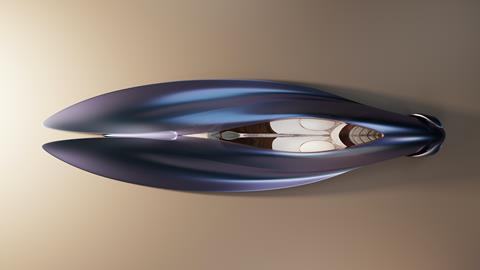 Five RCA students present their final major projects at an online event, with the overarching theme of purposeful, human-centric design

Human-centric design and the way in which people interact with vehicles is evolving. Data and AI are changing the user experience, allowing designers to create increasingly refined and often immersive interiors, while the introduction of autonomous driving technology offers a dramatic shift for the future.

But it’s not all about fancy cabins full of screens, smart surfaces and retractable steering wheels. Human-centric design can also endeavor to identify simple solutions that address real-world challenges, with the goal of making life easier or more efficient. These two different approaches were on display during the second Royal College of Art postgraduate showcase of 2022.

Led by the Intelligent Mobility course directors Dale Harrow and Chris Thorpe, the event provided an opportunity for five students to show their final projects in detail, with time for them to explain their thought processes and execution. Special guest J Mays, the former VP of global design and chief creative officer at Ford, was on hand to offer his thoughts and critique of each project. He opened proceedings by commenting on the rise of electric vehicles and the impending introduction of autonomous driving technology.

“We see companies like Tesla, Lucid and Rivian leading the way with EVs, while companies like Volvo have pivoted on a dime and changed the direction in which they will create vehicles for the future,” said Mays. “I would offer up that the companies stepping up and leading the charge on EVs will also lead on shared, connected and autonomous mobility. Therein lies an opportunity for the future. Just as EVs have come into the mainstream in a much shorter space of time than we thought it might, so too will shared, connected and autonomous vehicles.” 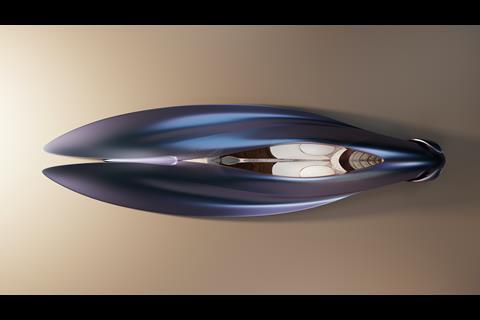 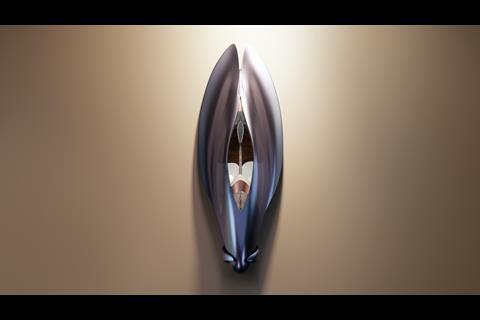 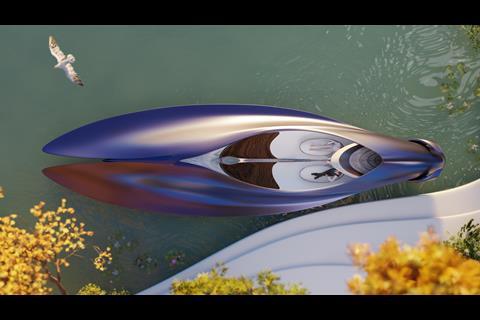 The first project to be shown, titled ‘Yuj’, was designed by Jay Ramji Asundaria. This futuristic vision of mobility is centred on a large living room-like area for occupants to unwind and relax. It is wrapped inside two sculpted metal wings, described by Asundaria as “layers of morphic skin that can detach so that the vehicle can become one with the environment.”

Key to Asundaria’s design is its relationship with water. “As a philanthropic action, Yuj breathes in water, which filters and heals physically and emotionally as it flows within Yuj. How should vehicles be part of the natural rhythms and create an immersive experience? Yuj regenerates the connection to the natural rhythm of living animals, and creates emotional value for the user and their journey.” 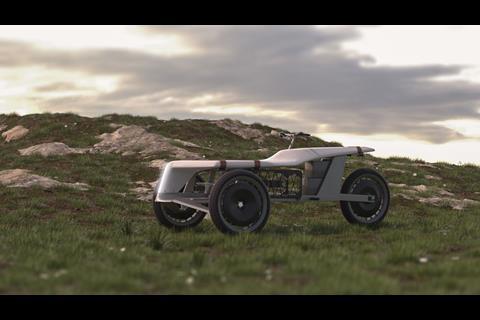 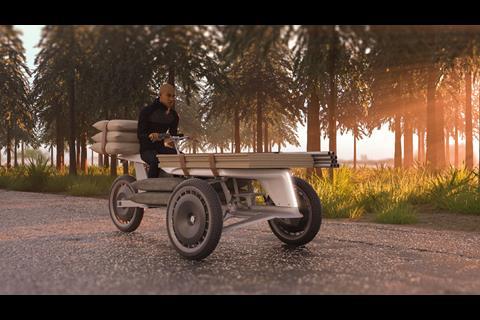 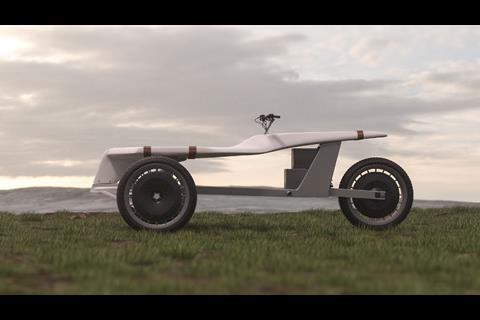 In complete contrast, Cheng Qian’s concept, ‘Mycelium Trike’, highlights the possibility of tackling real-world issues through simple design. His idea for the trike started to form after watching a documentary on Africa.

“I saw how transporting goods by bike can be a life-threatening job,” he said. “So I worked with a team of engineers and scientists around the world to analyse materials. We landed on mycelium, which is a mushroom, and then used aluminium from recycled matter to optimise the chassis for bad road conditions. When I started the final major project six months ago, I had four options in mind, and this was the most challenging because the budget is very low and the functionality very high. But I could also see how the project could change the world now for the better.”

Commenting on the two projects, Harrow praised the students for their ideas: “As designers, we are inherently empathetic and want to improve the world. It’s absolutely key to what we do. There is so much discussion on areas like sustainability, and although we are only a small part of the picture, an inspirational piece of work can make a big change. Design can bring that influence.”

He also suggested that the way in which the projects were explained through the use of short films is extremely important. “Both the students showed very evocative films. This is the way design is being sold now. A static model on a plinth is no longer telling a story - we need to have a narrative. It’s really important that we embrace this, because design needs to operate at a different level,” he said.

J Mays weighed in to give his thoughts on Asundaria’s and Qian’s projects. “I always think new technology has the habit of trickling down from the rich to the poor. What Qian showed is an exciting series of new technologies that start with the poor and could have a major influence on the rich. And what I love about Asundaria’s vehicle is its pure sensuality. It creates the experience far beyond a beautiful shape, with a cocoon-like environment for the occupants to sit in. I was thinking that I would love to sit in there.” 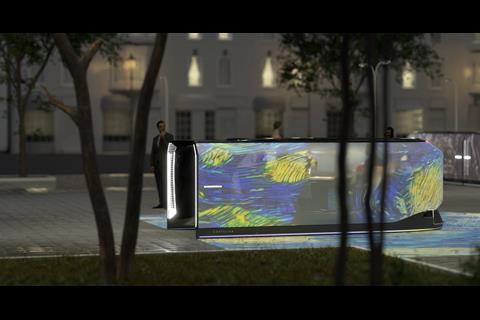 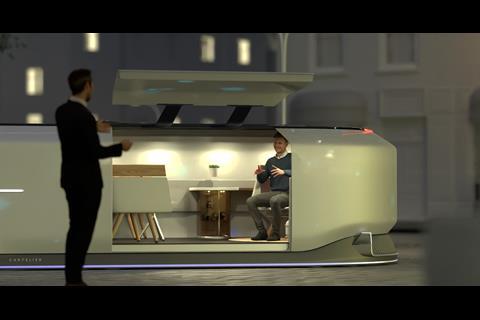 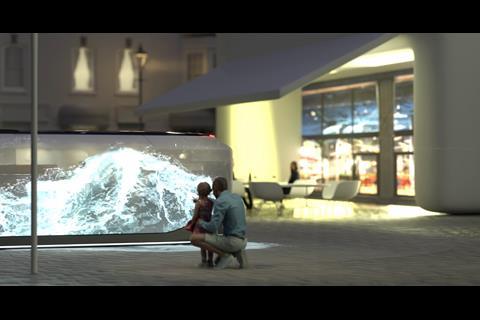 The third project shown during the event was from Min Keun Choi. Called ‘Cartelier’, the pod-like structure aims to provide mobility for city dwellers while also doubling up as a digital canvas for artistic expression. It has a large lounge-like space, ideally suited for commuters that need relaxation before entering work, or a social space for groups and families.

“Usually, when I start to design something, I try to find a trend,” said Choi. “With this project, it was shared mobility and the three-way interaction between people, architecture and the vehicles in the city. I focused on identifying the wants of artists, as well as the experience of people passing by and spectators.” 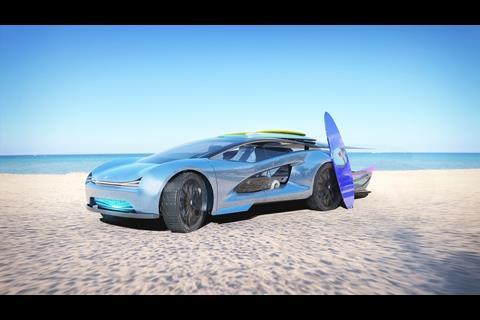 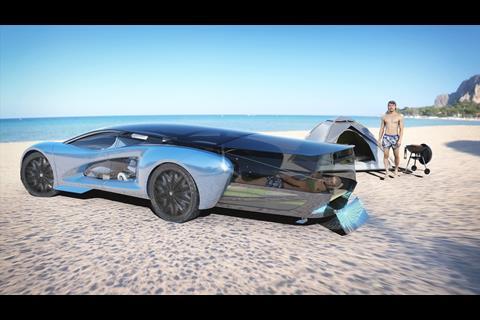 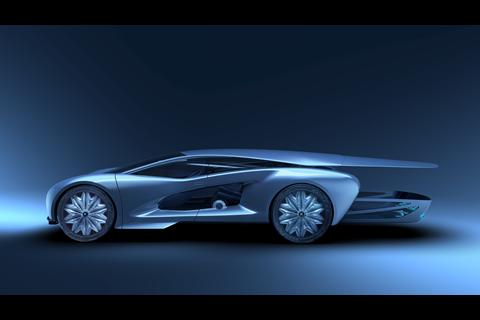 Kelly Holder’s project, titled ‘Totum’, offered yet another approach to human-centric design. In this case, Holder examined the wants and needs of young and adventurous individuals, focusing specifically on surfers in Australia. She highlighted several practical requirements while also creating an expressive design.

“My project is an example of bringing people together in remote areas by using innovation and technology,” she said. “It combines emotional with practical. The form is lightweight and pragmatic, and displays structural integrity. The flowing roof and bonnet is inspired by the ocean. The totum makes long-distance travel efficient with a hydrogen electric powertrain. Water filtration system is featured at the front, delivering clean water on the move. Finally, I used innovative autonomous driving technology but still kept the freedom of driving to make the vehicle appealing.” 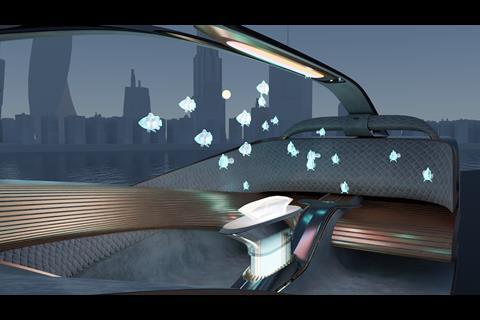 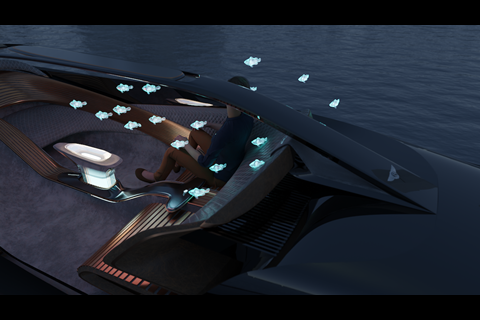 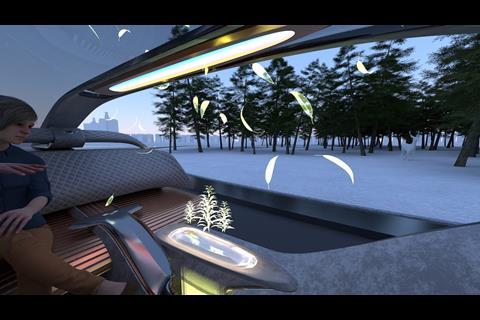 The final project on display, titled ‘Patronus’, was designed by Zixaun Zhao. A roomy and relaxing cabin, the concept leverages virtual reality to deliver unique user experiences, with the centre console doubling up as a projector.

“My project aims to create an awareness of nature and a connection between passengers and the environment,” said Zhao. “At the beginning, I found it tricky to combine sustainability and luxury together. I thought about the world that we will leave behind for the next generation, and I came up with this idea of having a virtual environment inside the vehicle that links to the natural environment.”

Harrow was keen to highlight Zhao’s use of virtual reality, and how it could potentially offer new ways of delivering user experiences inside the vehicle. “We have had a period of transition from analogue to digital for many years,” he said. “Most of us are overloaded with screens and digitalisation. So the question now is, how do we introduce technology that is beautiful and that we actually want to interact with, not just technology that is imposed on people? We have to find a human connection.”

“There are many interesting ideas as to how technology can play a 360-degree role,” Harrow said. “There are discussions on the metaverse, how we have a relationship with it and how it builds brand experience? We saw some complex ideas of digitalisation within a physical space, and some more simple ideas that could make the world a better place. These are all excellent projects and I congratulate the students for doing them. I think that design has immense power, and we have to be brave.”

Bringing the showcase to a close, Mays voiced his satisfaction with the innovative and alluring work shown by each of the students. “I find it heartening. We are going through a phase in automobile design where it seems like it’s okay to do ugly design. But what I saw in all the projects today – first and foremost, they are all beautiful. And if you think about how that relates back to the environment, there is an almost umbilical connection.”