Recently at the Future of the Automobile Forum in Los Angeles, Klaus Bischoff, Executive Director of Design at Volkswagen, discussed the forthcoming Volkswagen ID, which will, in various formats, represent the future of the brand. 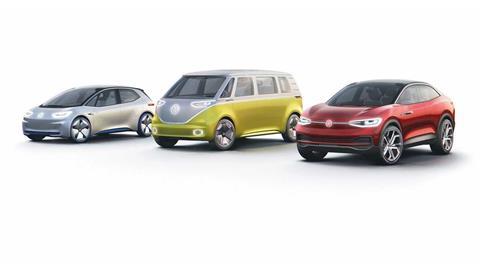 But when the production ID3 was recently announced by Volkswagen, a number of posts popped up on social media networks highlighting another car that was once considered the future of the brand.

The car was the Volkswagen Futura, introduced at the IAA at Frankfurt in 1989. Placed at the VW stand in a teal-ish blue hue with a white and fuchsia interior, the rounded and very compact monospace was presented as a preview of a future Golf, perhaps to appear in dealerships after the turn of the century. 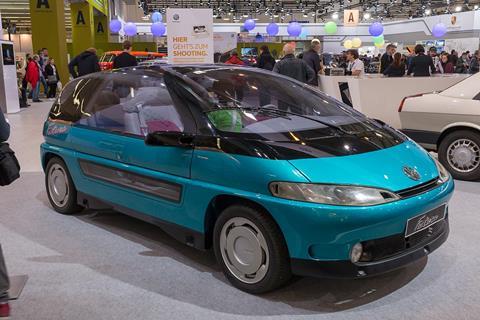 The exterior employed a clean monospace typology, an evolution from the two-box solutions of the so many Volkswagens of the time. The curving monospace was quite a contrast to the boxy, geometric Volkswagen design language of the time as well. The glasshouse was very large, and employed low emissivity glass, as well as holographic filters that blocked some 60% of the insolation of the sun.

Two dramatic gullwing doors (top photo) offered generous access to both the front and rear seats, provided you could step over the tall sill. Both doors and the rear hatch could be removed to create a T-top open car for fun weekend outings. 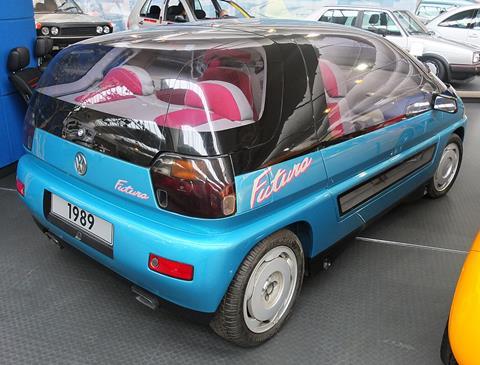 Unlike the sloping nose, the removable rear hatch was nearly vertical

The interior contained four padded seats, one of which could convert into a child safety seat, previewing a feature that would appear a decade later in Chrysler minivans. The IP and console were traditionally laid out, but the instrumentation was displayed on LED screened and could change colours, according to road and traffic conditions.

The aforementioned glasshouse provided a panoramic view from every seat. The cabin was kept quiet by means of an special noise cancellation system. 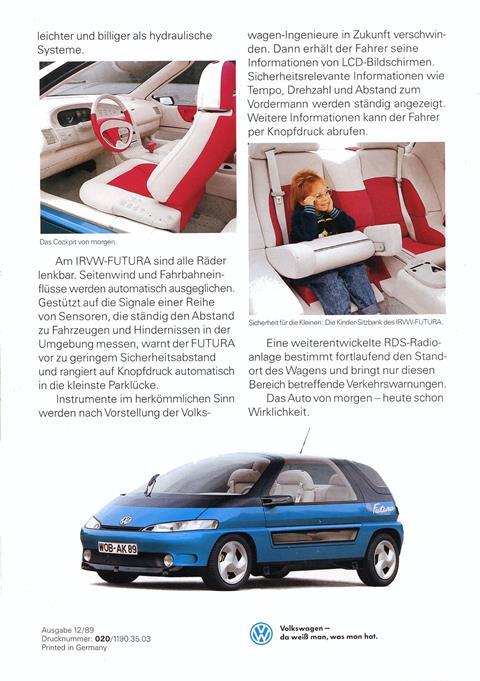 From the Futura brochure; good views of the interior, including the integrated child safety seat

A bit of context helps explain the Futura’s design. The late 1980s was abuzz with the possibilities of an aerodynamic monospace. The Renault Espace and the Chrysler minivan had introduced a new (and very successful) typology for family travel.

Soft aerodynamic forms were emerging, in a part as a reaction to the strong geometric wedge and box shapes of late 1970s and early 1980s concept cars. 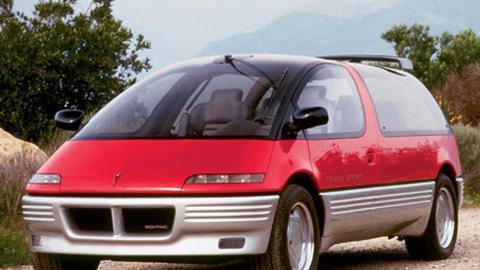 These two trends were combined in the Pontiac Trans Sport concept of 1986. A curvaceous monospace, with a huge glass house, the Trans Sport was, appropriately for Pontiac, a sportier version of a people hauler, and one that turned heads at car shows wherever it was displayed.

Other critics noted the bubble-top craze of the late 1950s and several science fiction TV concepts the displayed large glasshouses and gullwing doors. 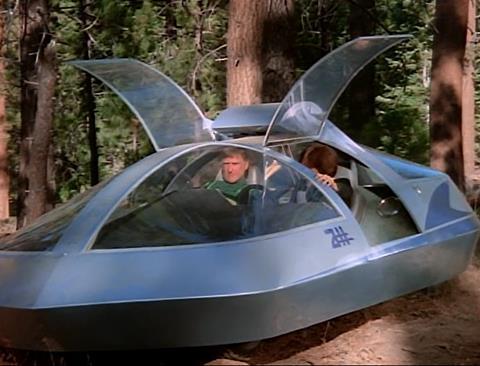 Others noted the Ford Splash and Pontiac Stinger concepts of the same year, which sported removable tops like the Futura. 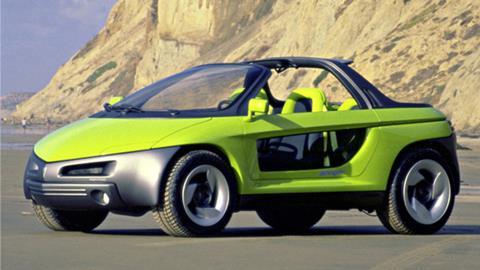 But the Futura was not just a beach cruiser; it was meant as a family coupé that could have a sportier weekend side to it. Its technical innovations were meant to ease travel in increasingly crowded urban and suburban driving conditions. The validity of the Futura concept was perhaps best shown by the Toyota Previa which brought a production ovoid to the MPV market in 1990. 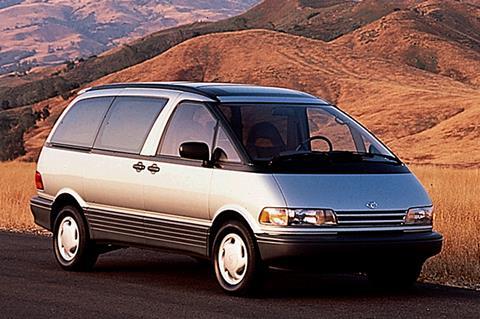 The Futura was not just a styling exercise. It was created by the Volkswagen Integrated Research team and was equipped with innovative technologies that we are finding on our cars now three decades later. The engine was a 1.7-litre petrol engine with a scroll-type supercharger – similar to a version of the famous Volkswagen “G-Lader” found on certain Polo, Golf and Corrado models of the time.

It only produced 82 horsepower, but economy rather than speed or acceleration was the goal. Volkswagen claimed the Futura achieved an average of 61 miles per gallon of petrol (not diesel!). 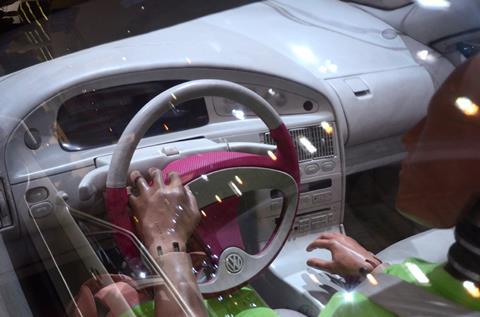 The interior featured a now-common info screen with navigation

A host of sensors scanning the surroundings notified the driver of encroaching cars or pedestrians. These sensors also fed information into an early navigation computer, which had a LED screen for displaying information to the driver.

Four-wheel steering enabled the Futura to maneuver in the tightest of urban driving situations. Volkswagen noted in a press release that the steering was “programmed according to vehicle speed to improve stability in side winds, over ruts and with variable tyre grip under braking”. Advanced anti-lock brakes, also new for the times were placed at each wheel. 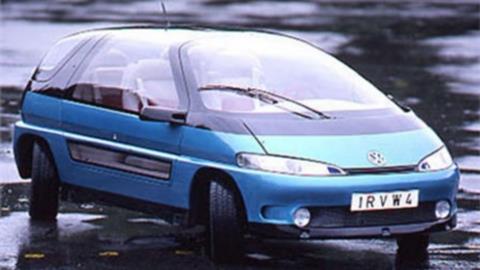 Not a great photo, but it shows the four-wheel steering system in action

The steering enabled the Futura to perform its signature technical trick: It could park itself at the touch of a button, in a space barely wider that the car itself. It was a pioneering use of this technology which is just now finding widespread application.

Autocar’s technical editor at the time, Howard Lees, explained the system: “It pulls this trick off by combining electronic throttle, parking brake and automatic transmission control with the electrically powered steering of all four wheels. Laser sensors scan the parking space, while ultrasonic distance sensors provide the control system with obstacle clearance information. Having built up a picture of the parking space, Futura decides how best to park itself and then simply gets on with it.” 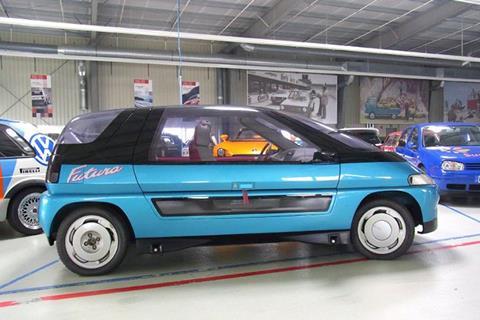 In photos, the Futura often looks longer than its 3780mm length

Sadly, Volkswagen could not just get on with it, and the Futura remained a prototype. Many of the Futura’s signature features- glasshouse, gull wings, four-wheel steering, etc., were just too expensive to mass produce. Much of the engine and sensor technology, however has trickled into production Volkswagens, especially in the last decade.

Could the curvaceous monospace ever see production? The electric car could certainly make a case for the typology, but a more blunt-nosed SUV type like Faraday Future’s FF91 seems the format for the car of the next decade. Still, the Trans-Sport and the Futura are interesting case studies in what-might-have-been, and for the dreamers, what might yet be.

For our German readers, here is a video comparing the Volkswagen ID Crozz Concept with the Futura Concept. Even if you don’t speak German it is worth a watch to compare the two cars in scale and detail.