People have been saying that hydrogen fuel cell vehicles (FCVs) will become commonplace in around 5-10 years for… well, a good 10-20 years, actually. Hyundai are saying it in 2018, but they say it having joined the likes of Honda and Toyota as one of the forces pushing the super-clean powertrain technology closer and closer to mainstream production cars. 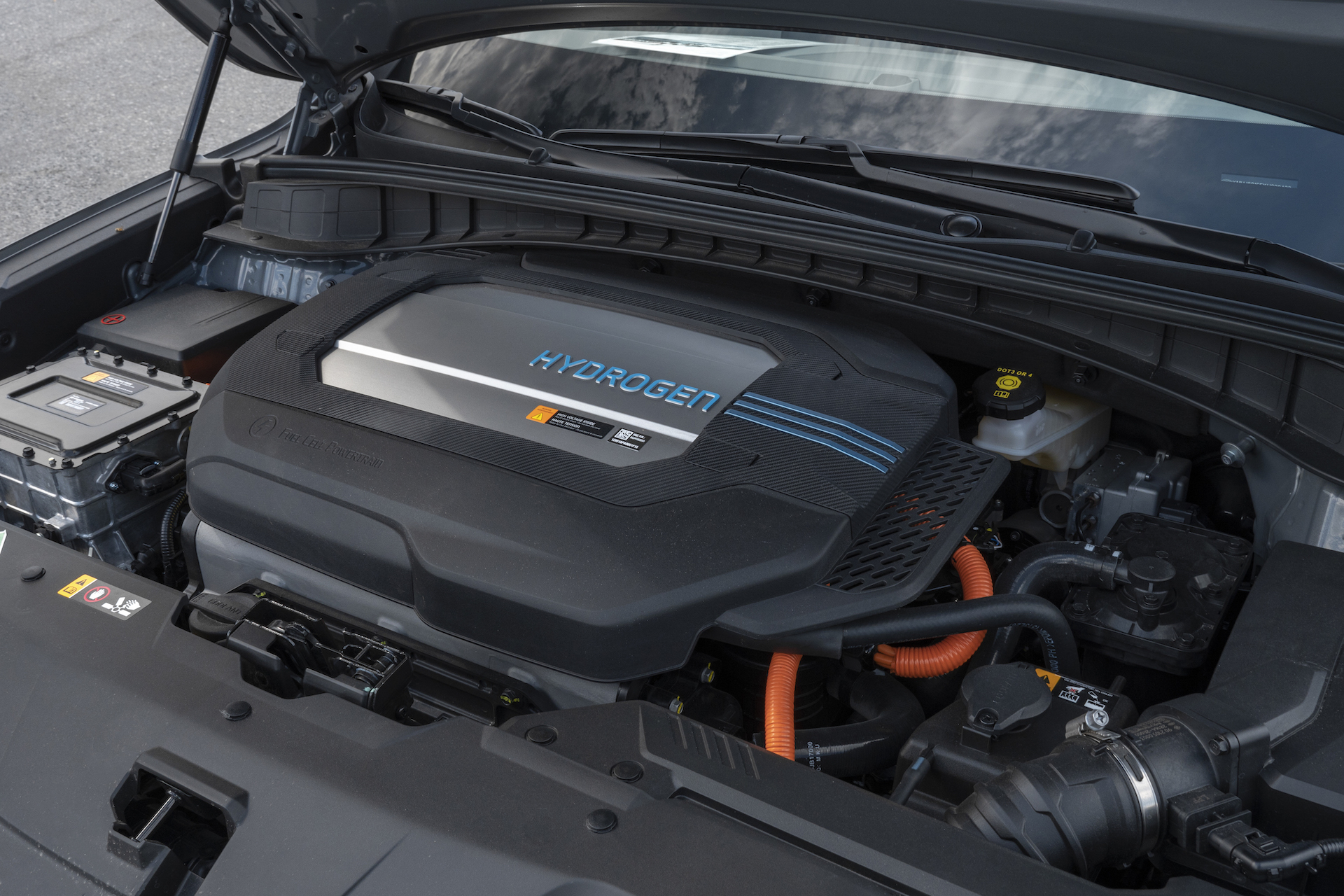 Having previously adapted an ix35 crossover to run on hydrogen, they have now created a dedicated model developed for fuel cell power from the start: the NEXO.

Already on sale in mainland Europe, it’ll reach the UK in right-hand-drive early next year. However, we got an early chance to drive a pre-production RHD car. 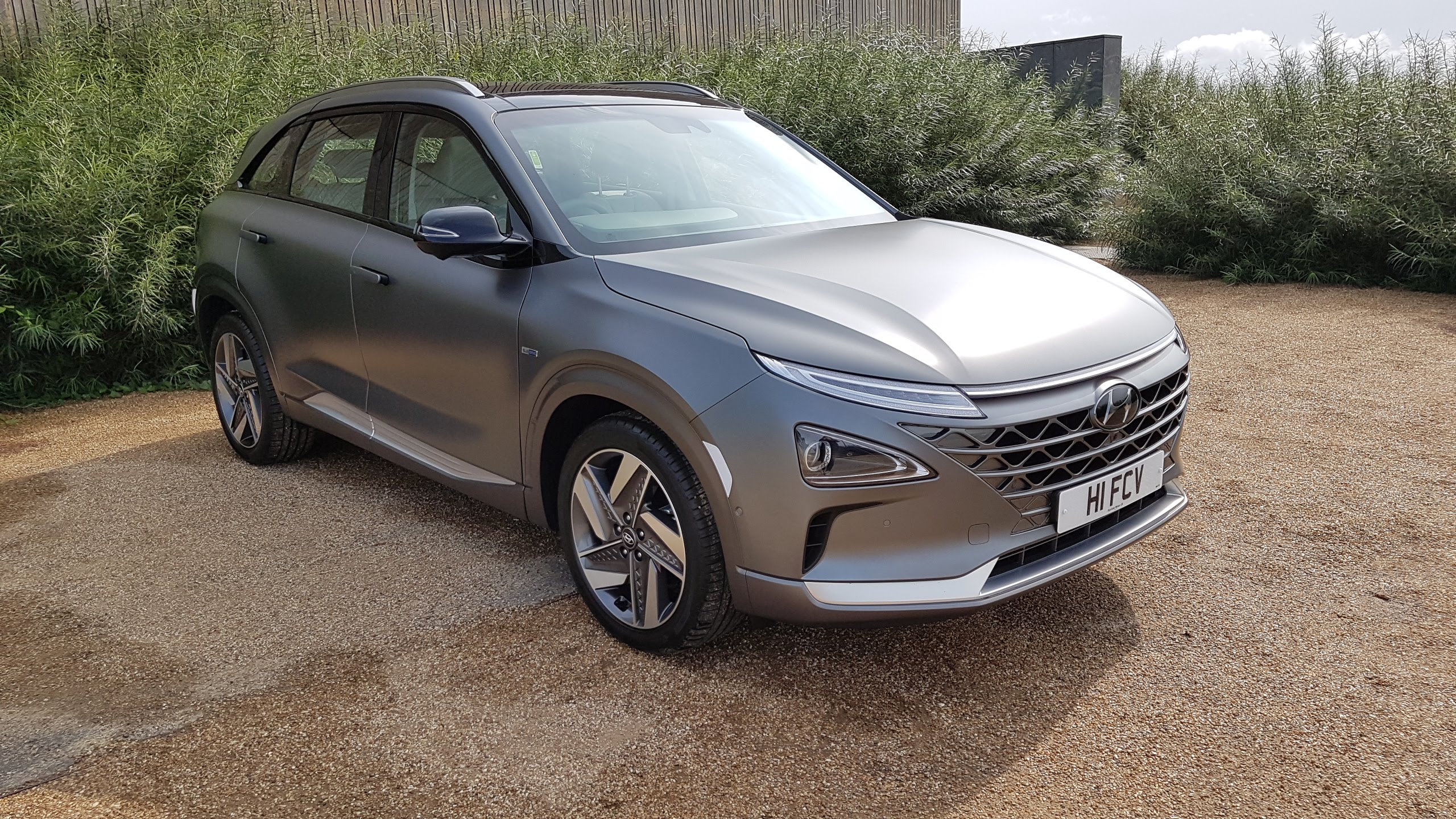 The NEXO (henceforth written as ‘Nexo’) is unique within the trio of big-brand FCVs for being a crossover SUV, rather than a sedan like the Honda Clarity and Toyota Mirai. Its appearance is also less, ahem, ‘challenging’ overall, not doing anything to look overtly futuristic or unconventional despite its next-gen power source – although there is some aerodynamic sculpting and ducting to reduce drag and thus add range.

Its interior, too, is very tidy and mostly intuitive – although certain elements raised our eyebrows, for reasons we’ll get to later. 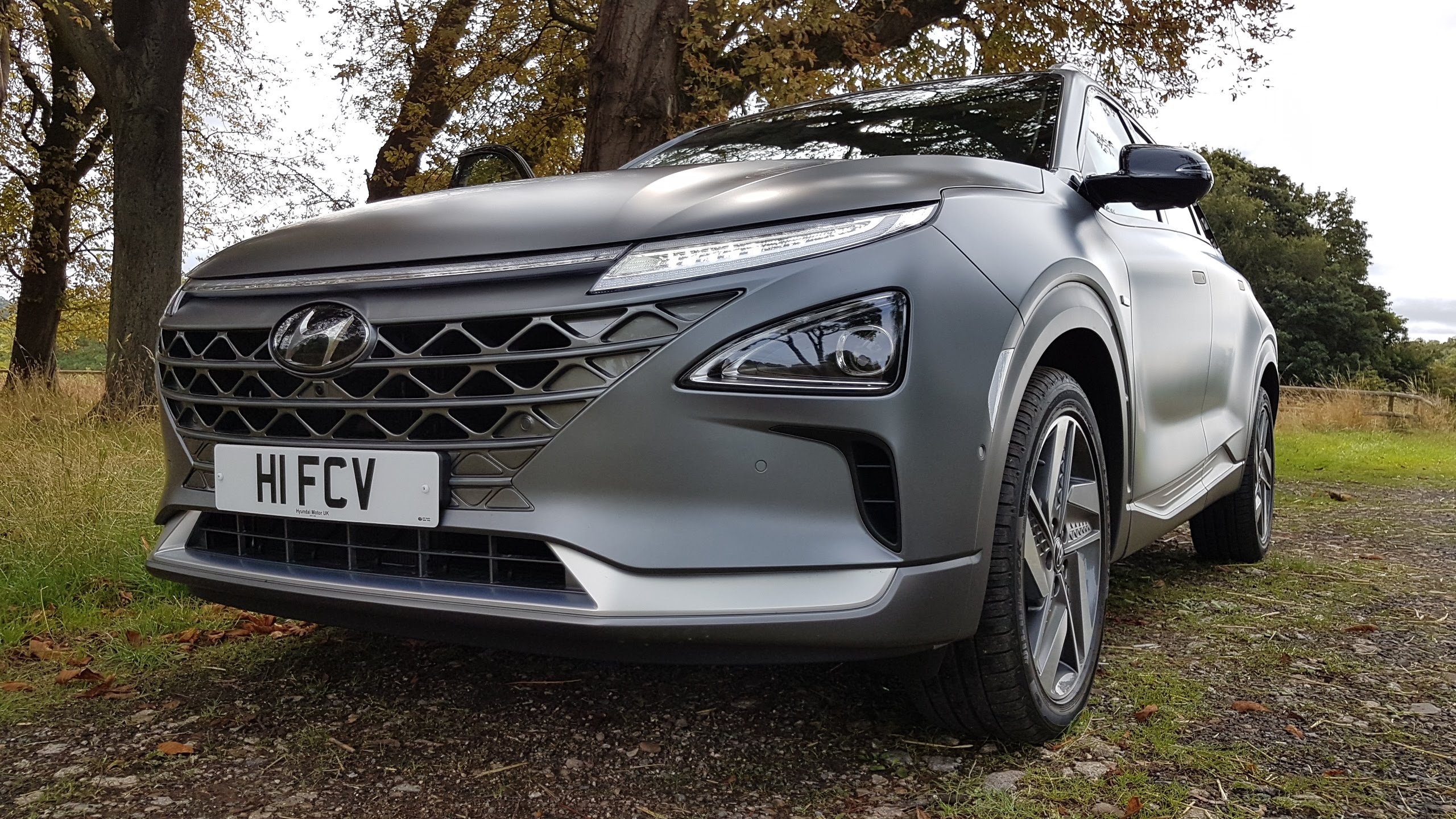 The exterior, meant to ‘flow like water’, uses a lot of on-trend design cues and tactics to add some visual interest to the largely standard-issue midsize SUV proportions – although it has to be said that the grille, despite being wider than necessary, is relatively subtle in a world of chrome-festooned monstrosities.

Above it is some glitzy-looking LED strip lighting which expands at the sides to house the daytime running lights. The way they sweep quite noticeably upwards as they wrap around the corners would fall into the same trap as the facelifted Citroën Cactus of making the car look unnecessarily angry, were it not for the ‘smiling’ main grille. Also like the Cactus (among others), more powerful headlights sit mid-height at the outer edges, here in a triangle graphic that’s repeated in the mirror-mounted turn signals and the clear-lens LED tail lights. 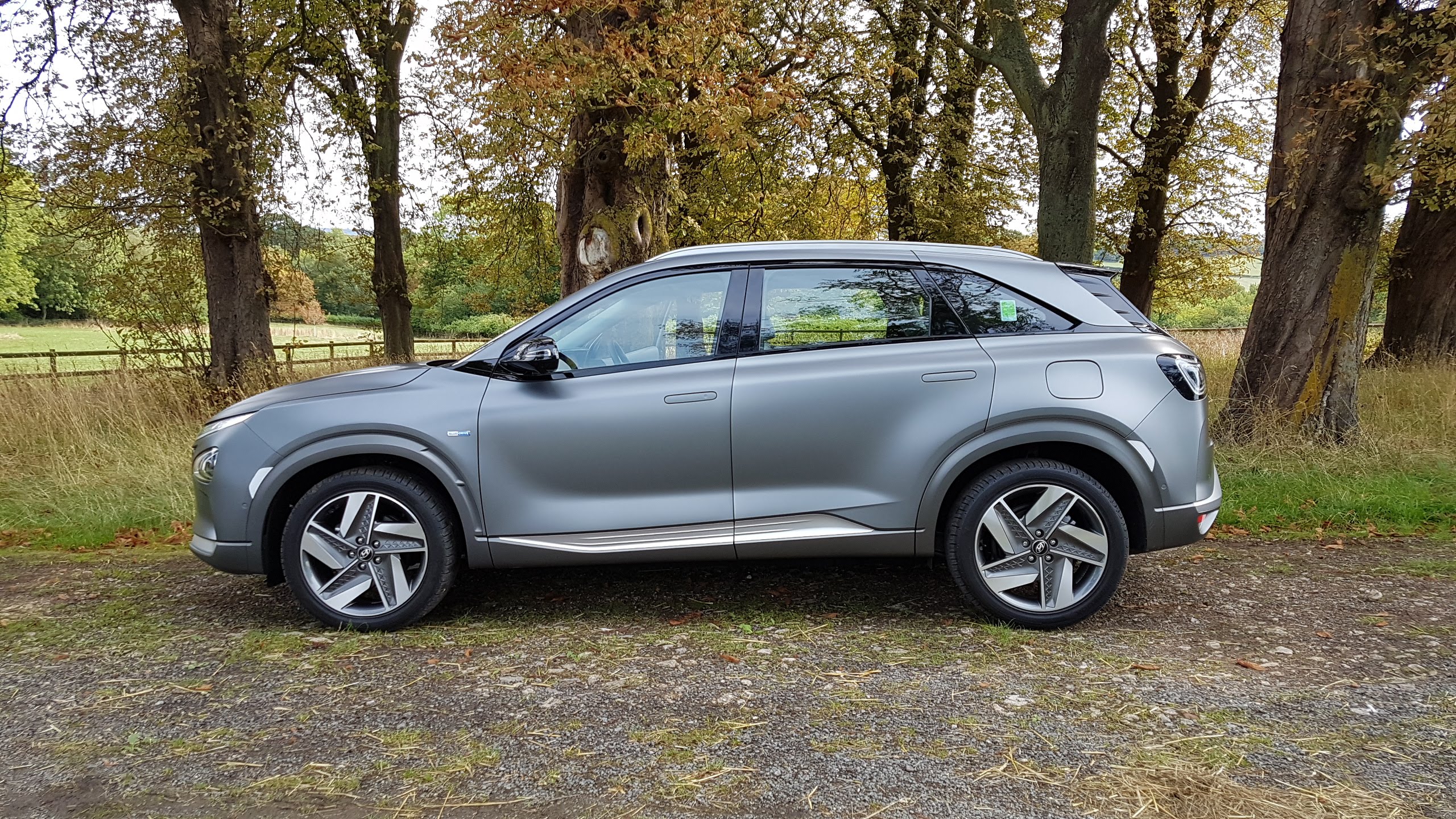 Between the irregularly radiused front and rear wheel arches, the surfacing is soft – an effect possibly aided by the matte grey finish on this car – but sharply punctuated along the side skirt by a silver blade sitting beneath the light catcher. The shoulder fades smoothly in behind the front wheel and follows the beltline steeply upwards to wrap around the rear.

Meanwhile, the optional ‘aerodynamic‘ 19-inch wheels look like somebody’s lifted up five scissor blades to reveal a starfish, which goes nicely with the aesthetic theme of being inspired by water. 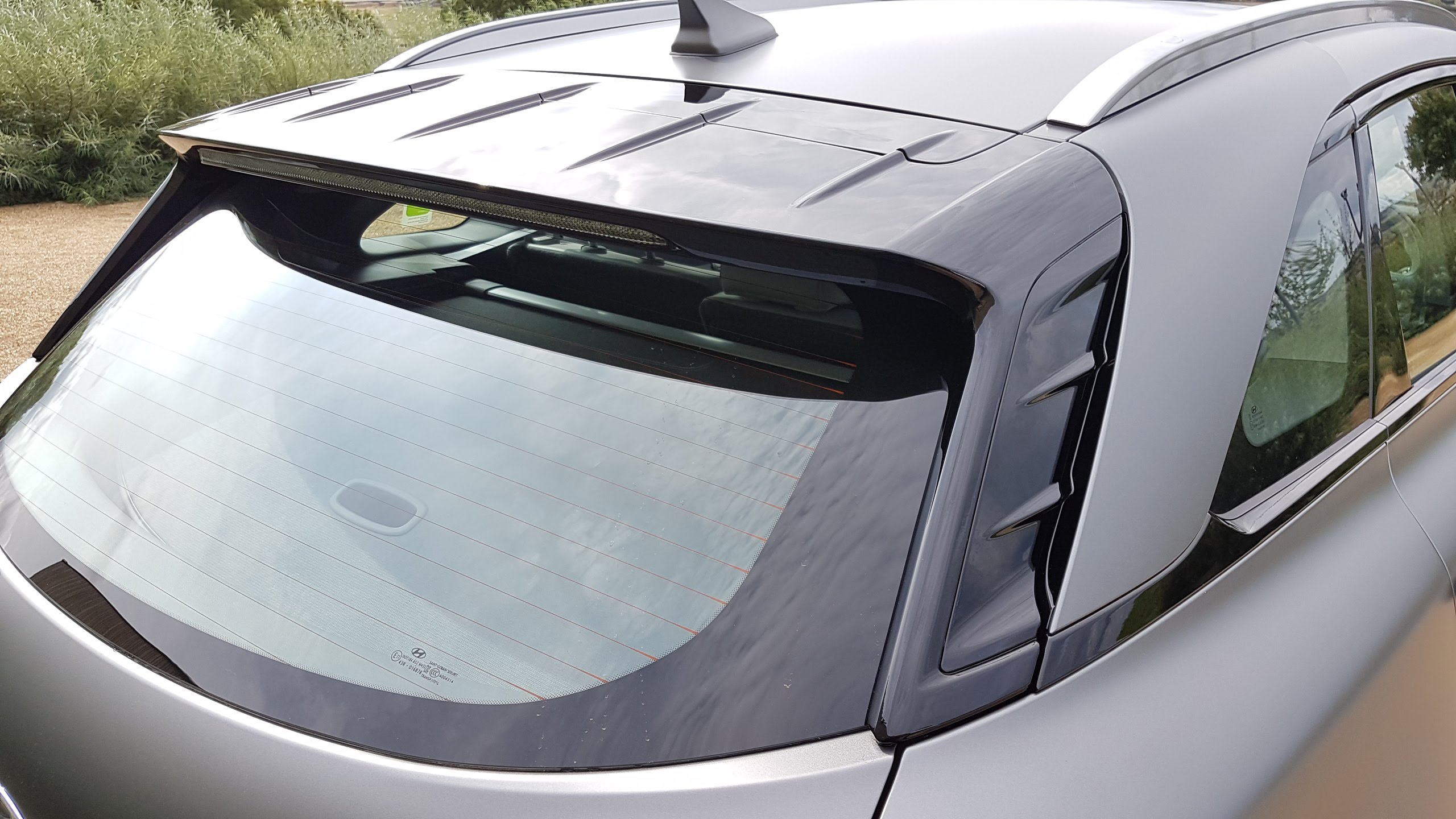 The roof profile appears multi-layered, as the black window trim appears to run ‘underneath’ the wing-like D-pillar that drops down, before reappearing as a long spoiler with aerodynamic strakes on each surface. In fact, the roof is graphically separated from the lower volume, thanks in part to a somewhat brutal horizontal cut at the base of each A-pillar – although curiously Hyundai doesn’t appear to offer its floating roof in a contrasting colour on the Nexo. 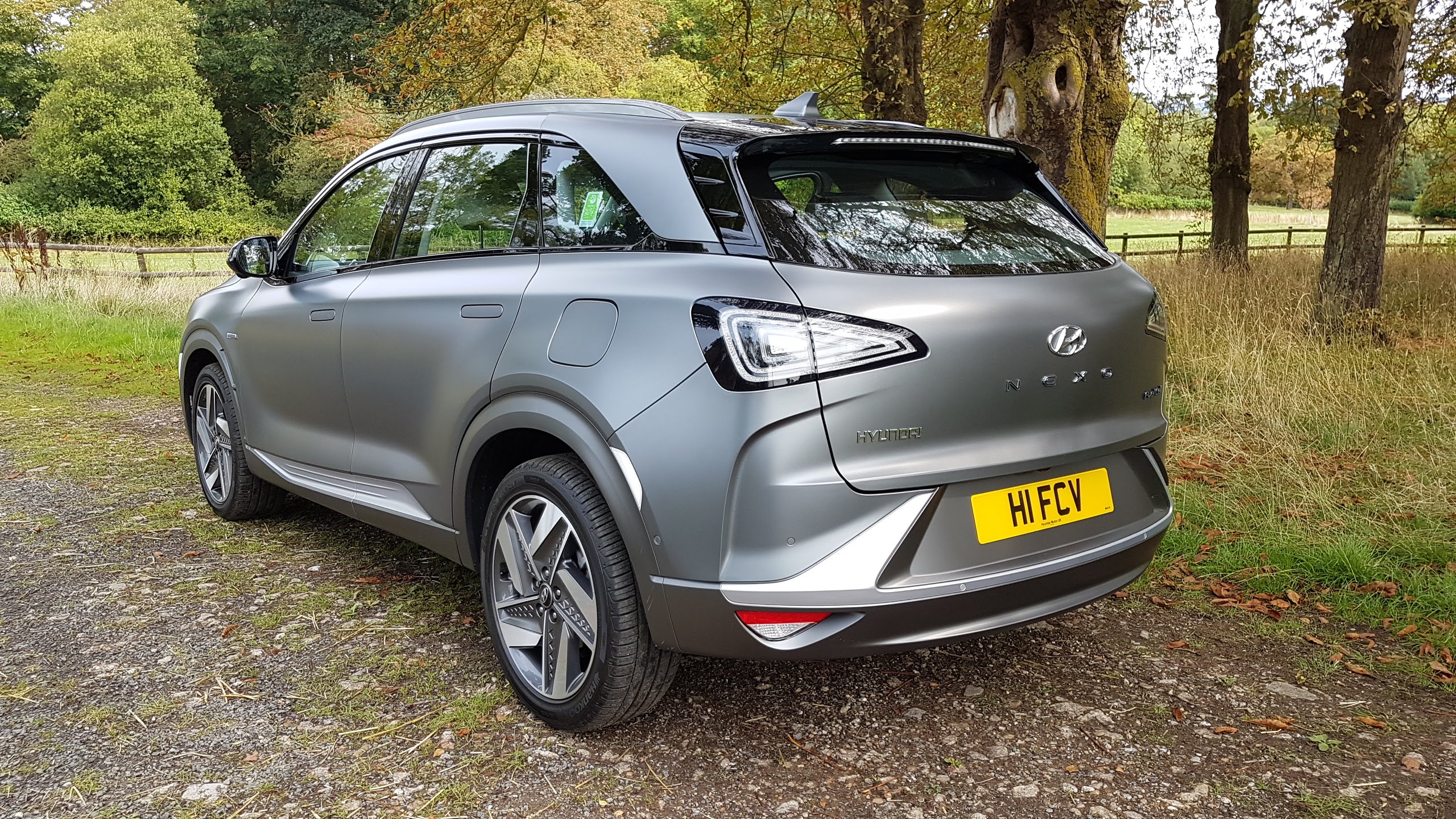 The rear end hides any water-emitting exhaust pipe under a smooth rear apron, above which is a double-sharkfin piece of silver plastic trim to coordinate with the side skirt blade and front lower grille surround. The line on each side, which sprouts out of it to reach up and under the taillight cluster feels a little unnecessary, although it could be there to create cleaner separation of the airflow from the bodysides. 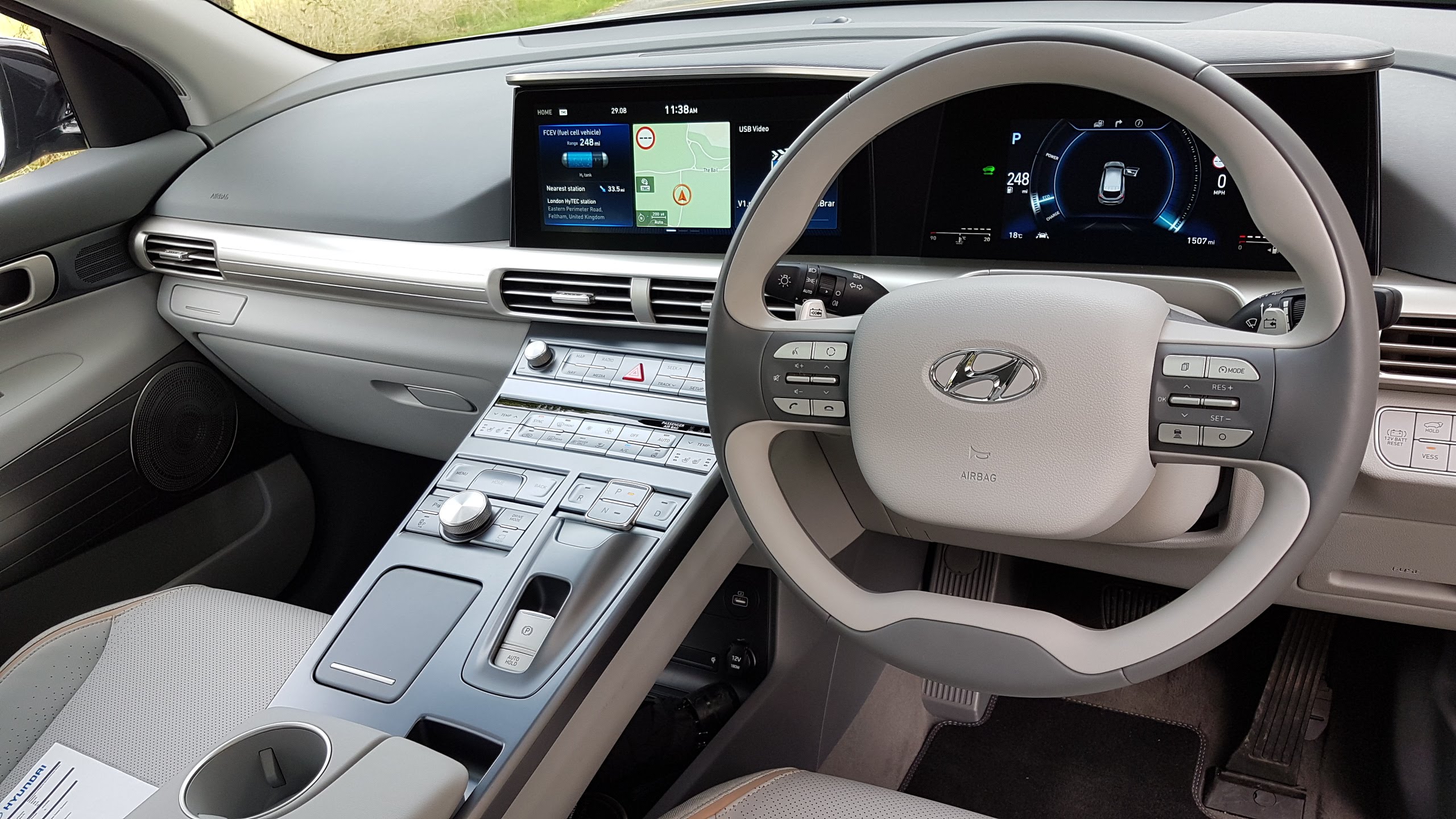 Pull on the retracting door handle to get inside, and you’ll find a very clean, very grey cabin, with metal trim in the doors and across the dashboard to break up the plastic and leather areas – “vegan leather,” no less, according to Hyundai.

They also boast of “eco-fibres based on cane sugar” being used for the headlining and floor mats, and “eco paint” for various trim bits, as part of a drive to reduce the Nexo’s carbon footprint by 20 per cent via the use of sustainable materials. 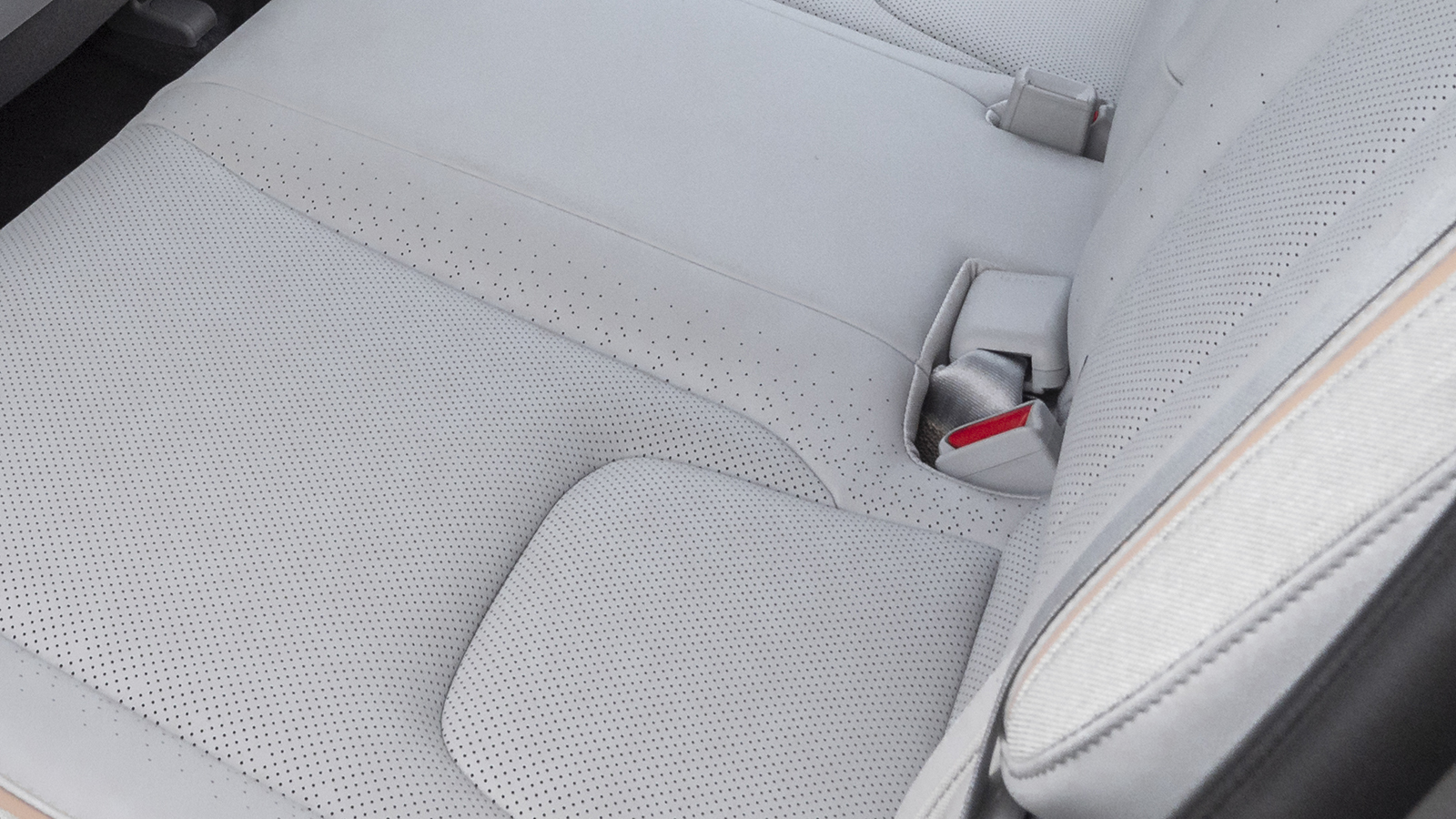 The comfortable seats are all perforated, but only the front ones are ventilated. Hyundai have used the perforations to create a fading pattern around the edges, like tiny bubbles in sparkling water. It’s just about the only thing that isn’t uniform and rectilinear inside the Nexo.

Rear legroom is good enough for this five-foot-nine writer to sit behind the driving position with a couple of inches between knees and seat. 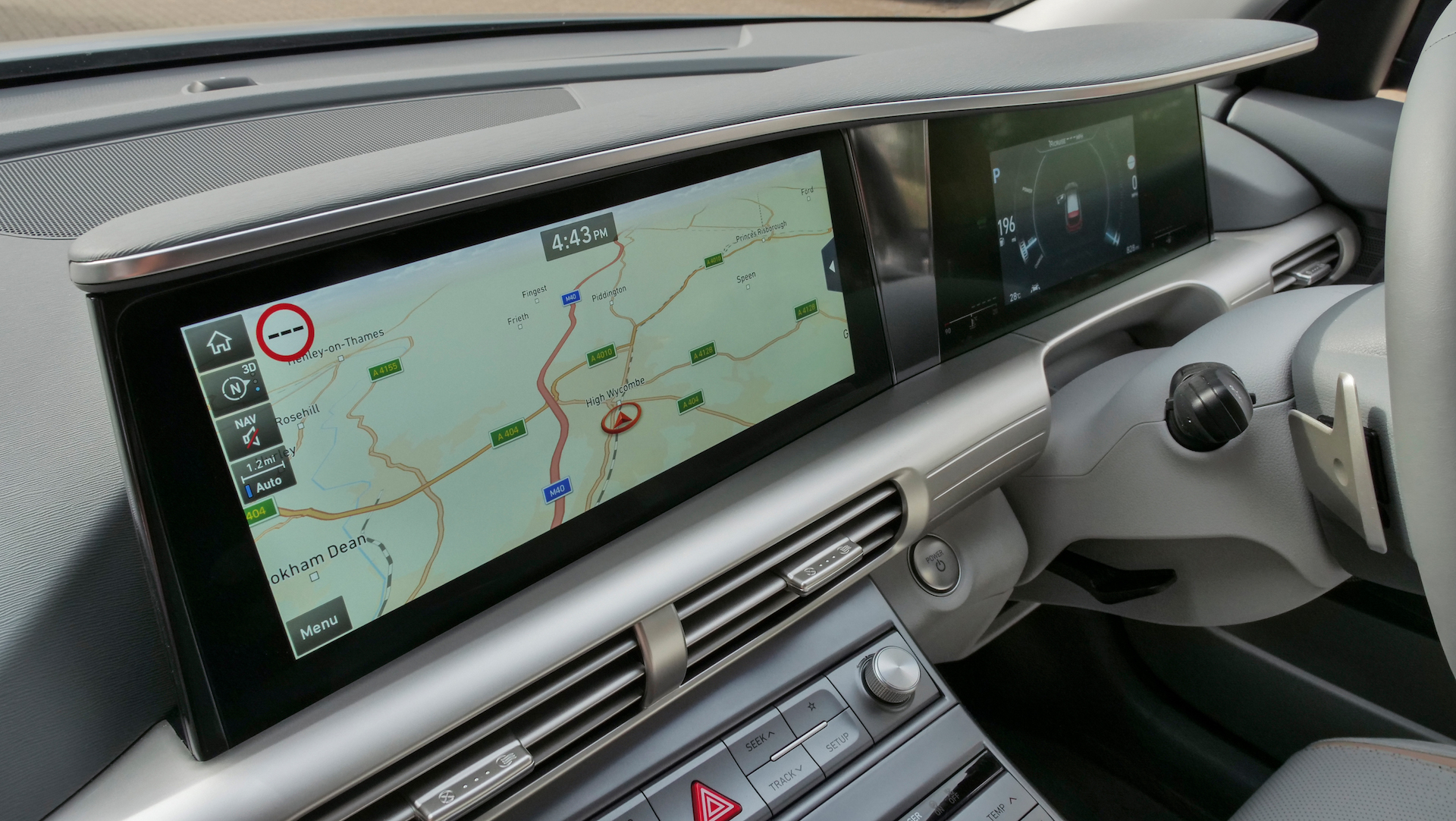 The two-in-one screen unit – not dissimilar to that of a Mercedes-Benz, but with a sun shade on top – boasts detailed graphics and is intuitive to interact with, but the centre console below was initially concerning. The infotainment screen measures in at 12.3 inches, while the driver’s screen is a more modest seven. 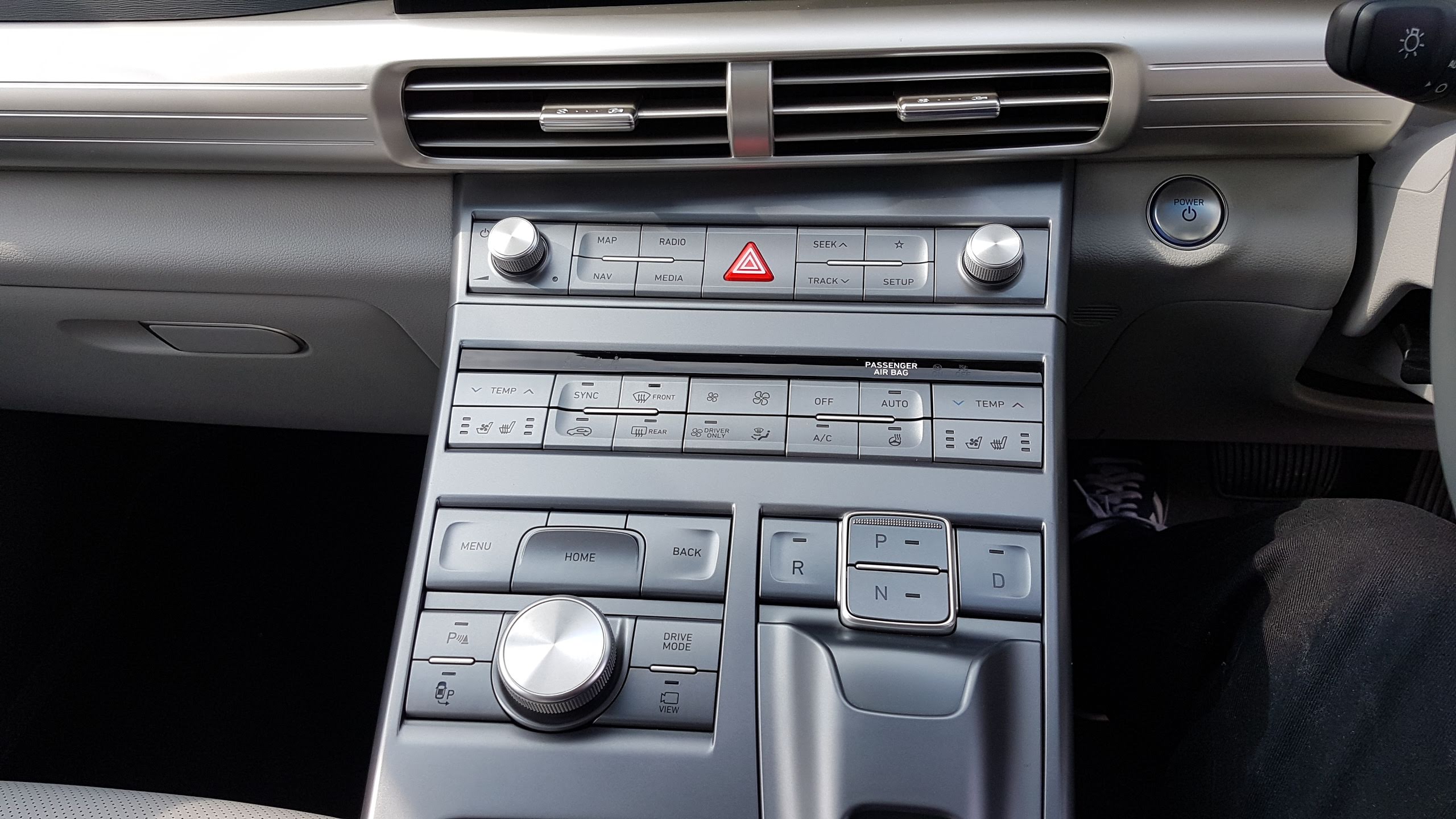 At first glance, it’s a baffling array of flush, anonymous buttons that all look basically the same… but take a closer look and they are at least grouped together to separate out each area of functionality, with some buttons getting extra shaping to help you find them without looking.

However, we feel more could have been done in this regard as it would take quite some time to learn by muscle memory where everything is – and looking down from the road for multiple seconds to find the right control is never advisable. Still, at least they don’t demand that you root through sub-menus on the screen for everything. 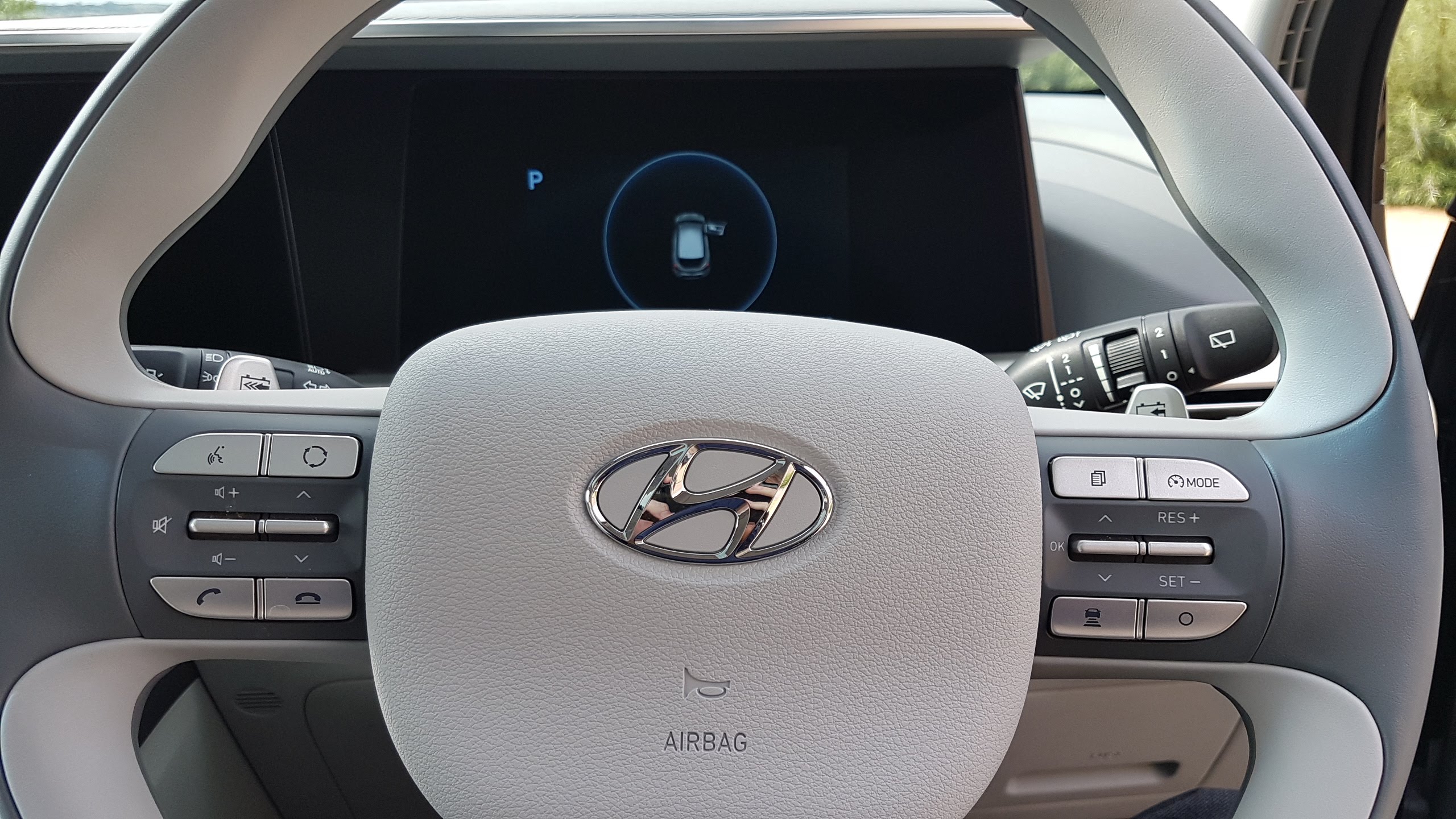 Meanwhile, the two-spoke steering wheel arranges its thumb-tip controls in simple, straight lines and wears its vegan leather smoothly, although the wheel itself didn’t quite have the ‘weight of quality’ in this pre-production example. 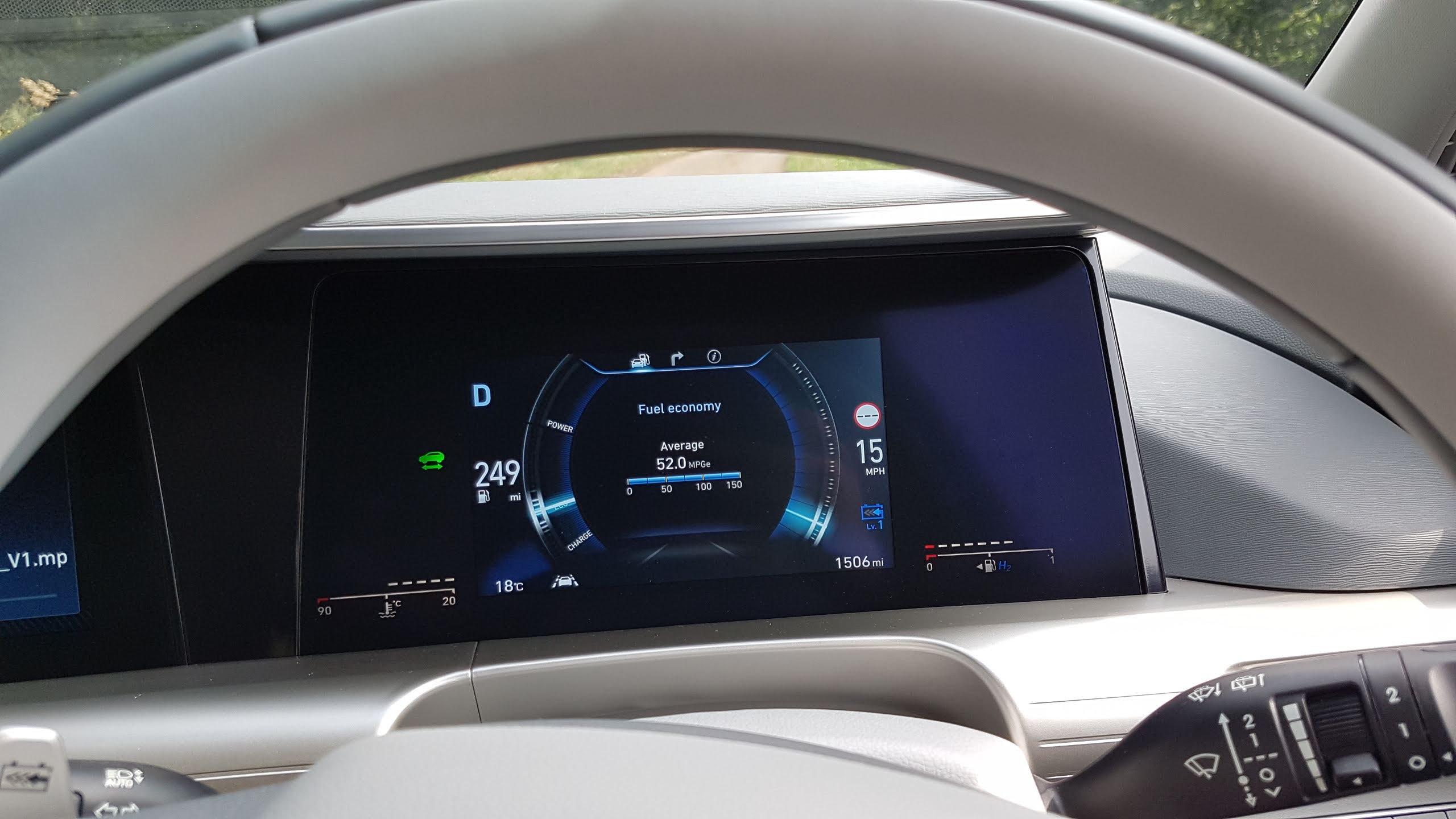 We didn’t get a very lengthy run in the Nexo, primarily due to range concerns as much as it being a rare prototype – the screen revealed that the nearest known hydrogen refuelling station was 33 miles away. Our test venue’s private roads were thus our playground for the short drive, and we respectfully left the car in Eco Mode. 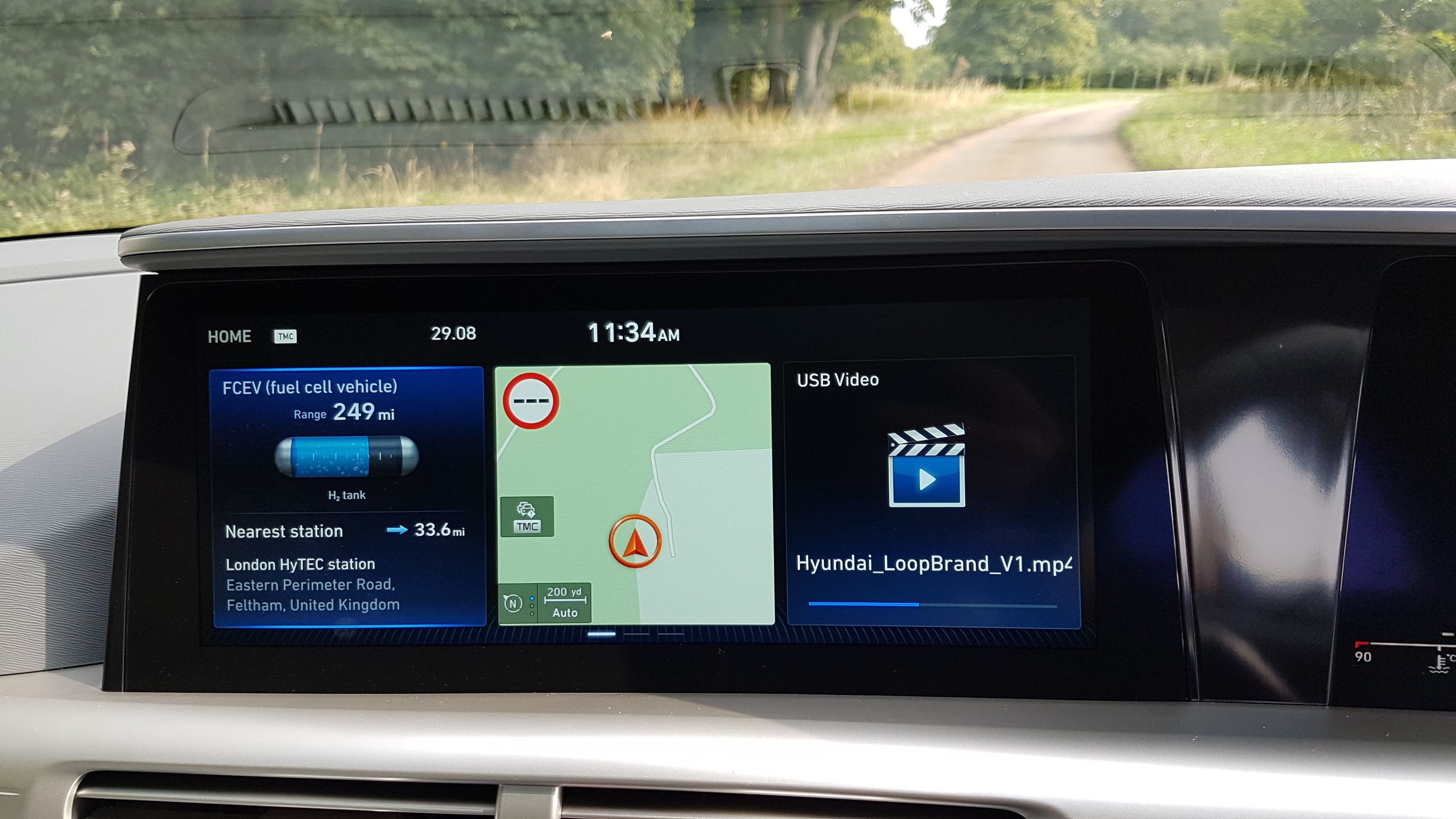 Once you’ve found the Power button by your left knee, which is completely obscured by the steering wheel (sadly a standard issue in all new Hyundais), the screens wake up with a mildly sci-fi-style virtual IP, while the home screen to the driver’s left is split into three areas – fuel cell info, maps and media – any of which can be picked and expanded to fill the whole central screen for deeper diving (or you can scroll right using the largest twist-and-press knob for more specific options).

The most entertaining screen is the Prius-style realtime power distribution display within the Fuel Cell section, which shows you how power is being used, generated and recuperated.

As those fuel cells are generating electricity which then powers a 120kW motor at the front axle, the Nexo drives in very much the same way as any battery EV – smooth, whisper-quiet and responsive (although Eco Mode lacks the razor-sharp throttle response one might expect, in order to conserve battery). 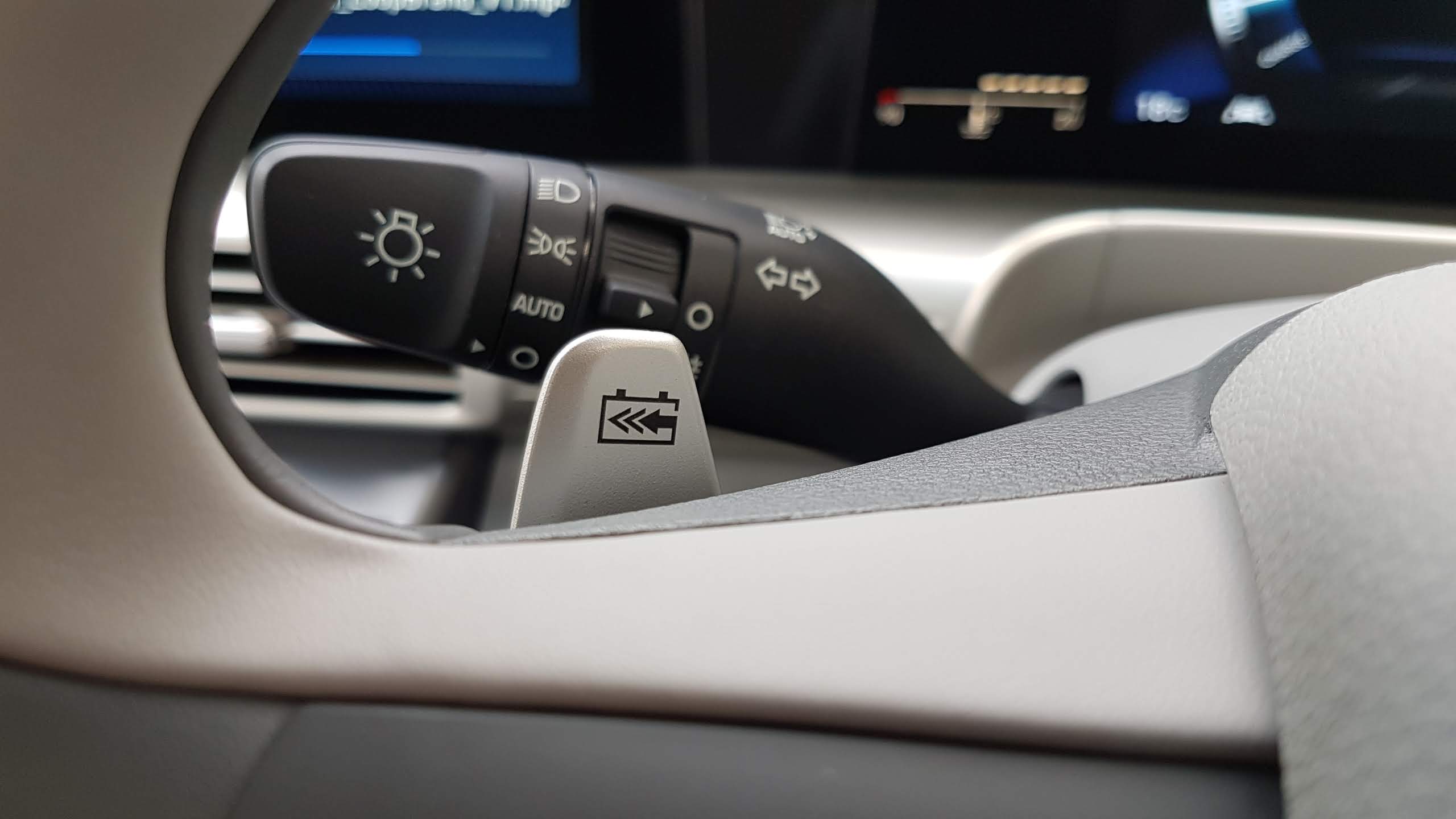 This also means that, just like the Kona Electric (road test coming soon), there are two paddles behind the wheel to adjust the energy recuperation strength. The more energy you ask of them to recuperate while coasting and braking, the stronger the braking effect created by the system. We found ourselves playing with this quite frequently.

The virtual IP swaps a rev counter for a condensed version of the power distribution display on its left, with a green bar jumping up and down between Power and Charge as you press and release the accelerator.

The speedometer, however, is arguably problematic as it uses a similar, unlabelled, bar graphic with a small number offset far to the right of the screen. This does leave space for additional journey information in the centre, but it is not where the eyes naturally point when looking to see how fast you’re going. We didn’t get used to it within the time. Perhaps a head-up display would help. 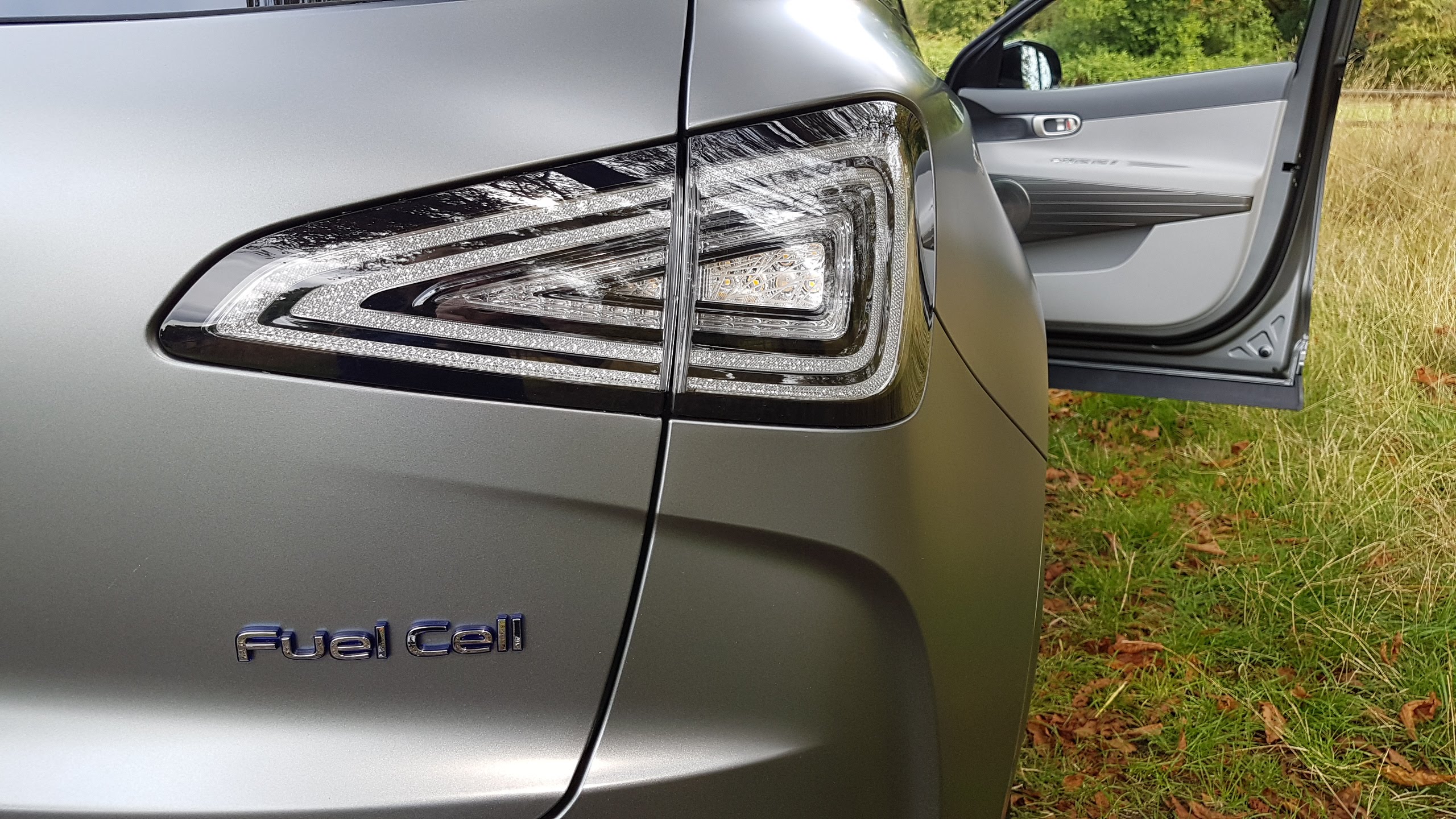 Using a mid-size crossover as the medium through which to develop and promote fuel cell technology doubtless has packaging benefits and suits what the market is looking for better than a sedan or coupé – but one could equally argue that, in such a competitive and saturated market segment, it will be difficult to stand out when the kerbside USP is effectively little more than some blue-edged badges saying ‘Fuel Cell’.

The exterior design, while ticking all the trendiness boxes, only goes some way towards adding distinctiveness; how many crossovers now have split-level headlights, a large grille and an elaborate D-pillar? The interior befits the clean, modern feel that an FCV should have as a futuristic zero-emission vehicle, but isn’t without its ergonomic imperfections. 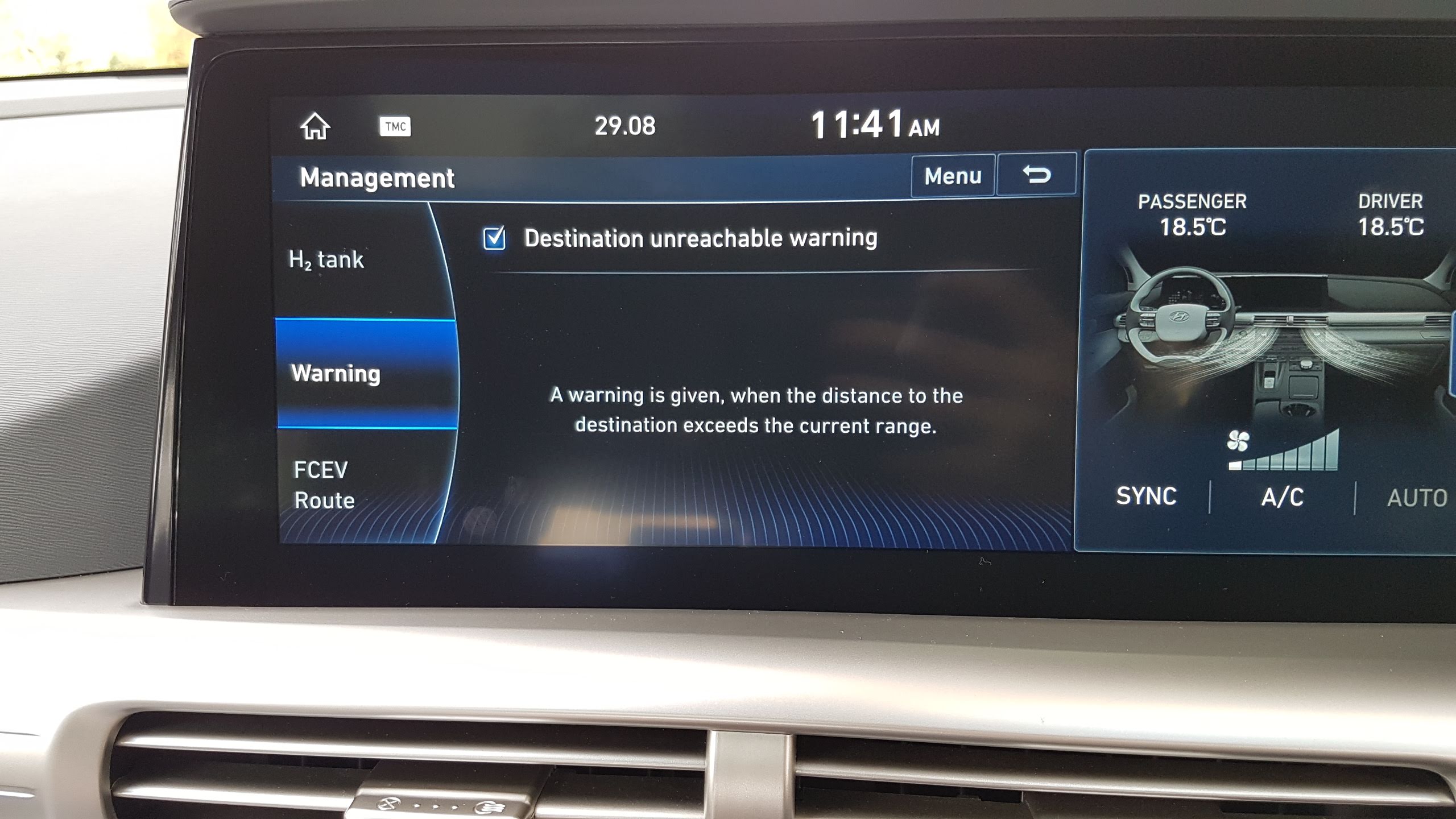 Acknowledge the elephant in the room that the infrastructure simply isn’t there outside of a major city, and it’s hard to imagine the Nexo changing the market forever and rattling the industry like the Tesla Model S did for battery EVs – although, to be fair, that was hard to believe before it happened as well.

Hyundai counter-argues that, just like EV chargers, as more people buy FCVs the demand for greater infrastructure will rise and it will start to appear… but that relies on a sufficiently large number of dedicated early adopters, just as EVs did. What’s more, the Hyundai doesn’t really have the benefit of Tesla’s smooth yet high-tech visual appeal, nor its uniquely enthusiast-driven brand image (although perhaps a powered-up ‘Nexo N’ would help with that bit).

Will enough of the people who are moving out of diesel also dodge the growing crowd of battery EVs to buy an FCV instead?

In any case, those who feel strongly about hydrogen power, and can already justify it in 2018, will find themselves in a comfortable, relaxing car with a state-of-the-art interior, and more clever design touches than concerning ones. 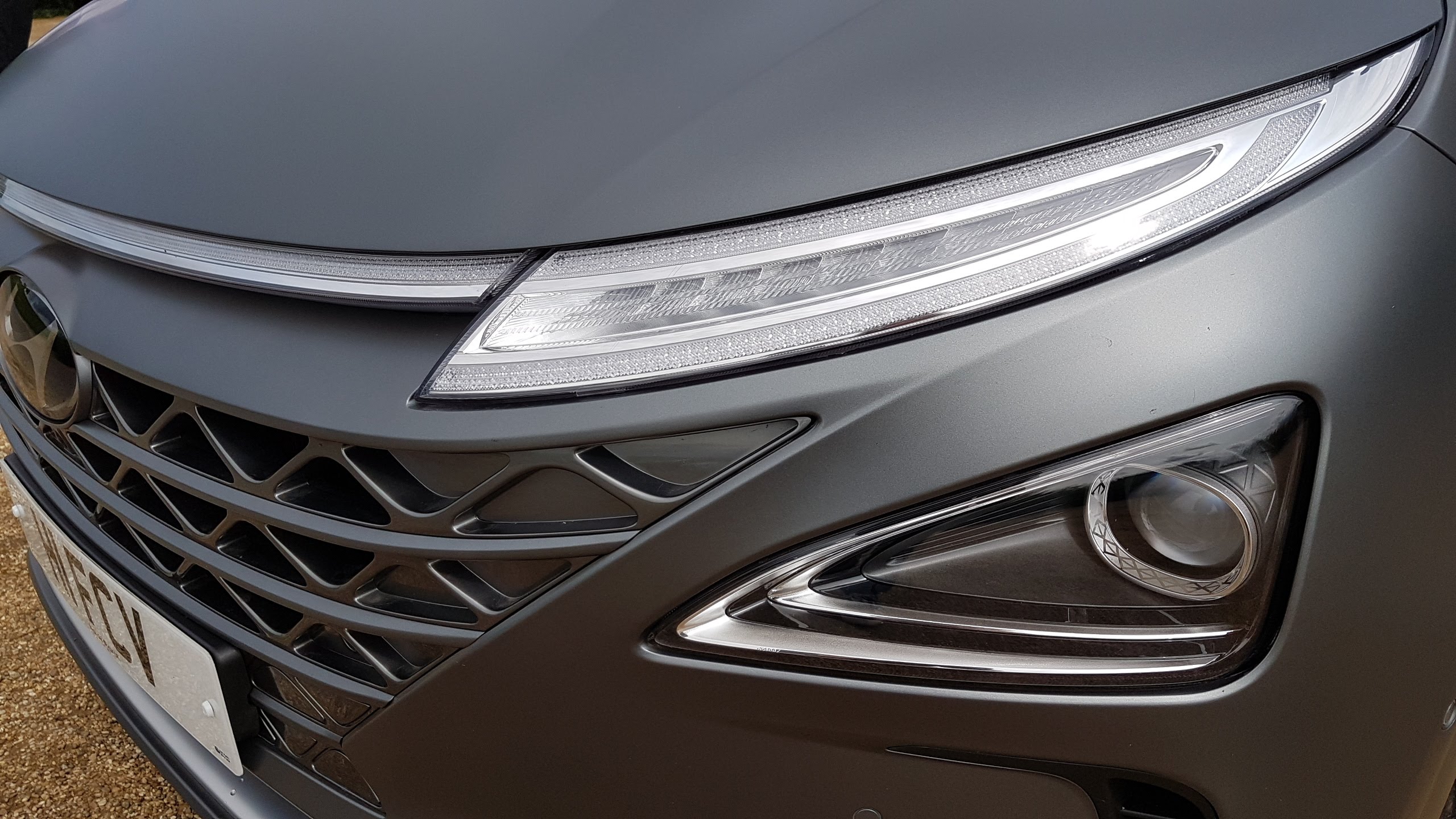