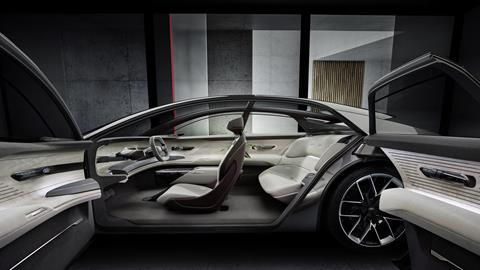 Further showcasing Audi’s all-electric future is the Grandsphere concept – a grand touring saloon with Level 4 autonomous driving capability and reimagined proportions inside and out.

Although clearly a showcar, the Grandsphere isn’t quite audacious as the Skysphere we saw last month in California, and hints more closely at a future production vehicle. It could even be an eventual replacement for the A8 luxury flagship.

“Our first brief from Marc [Lichte] was: “It should be first class – and I don’t want to see business class,’” Audi exterior designer Amar Vaya tells CDN. The exterior team in Ingolstadt had some “crazy” ideas but eventually settled on a theme that he describes as more relatable for today’s customers. “So, building on the history of Audi trying to create something new on top of that,” he says. 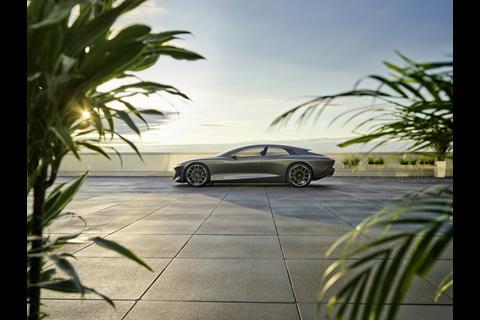 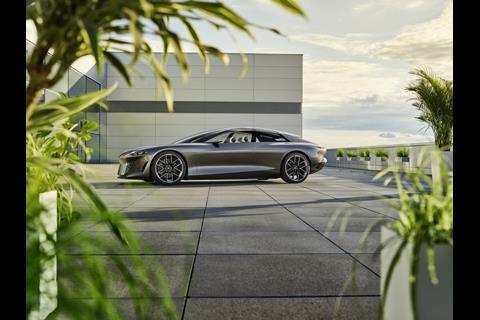 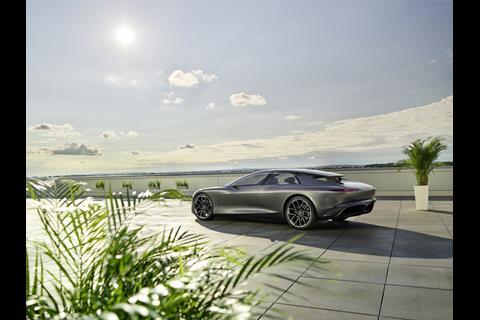 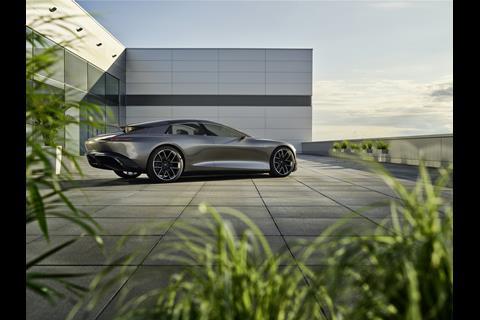 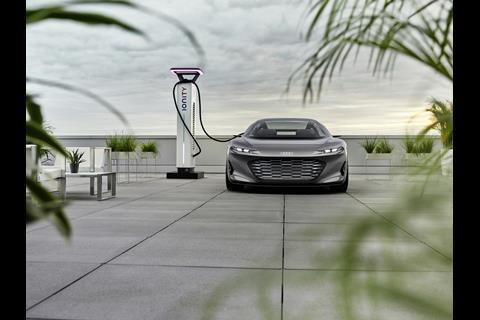 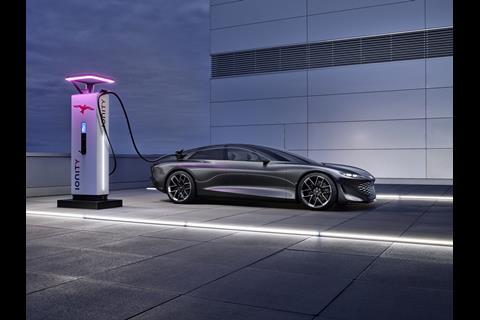 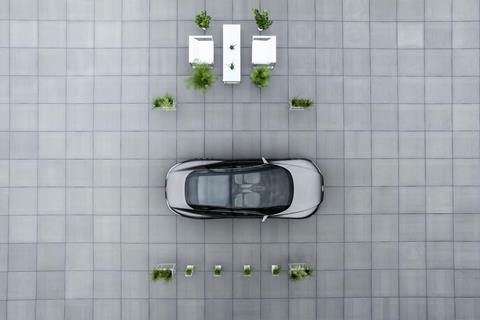 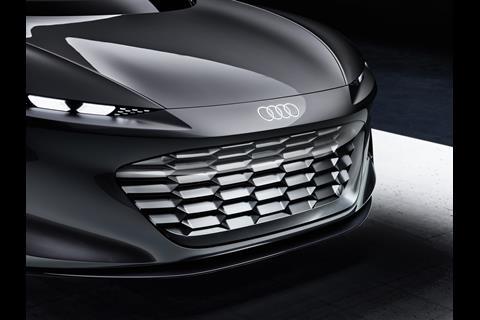 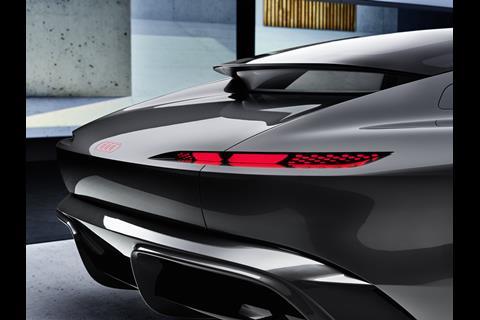 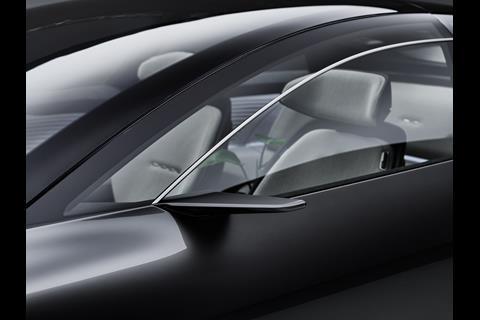 For Audi’s trio of new concepts, the design process began first with the interiors, and then exterior designs were created around the cabins. In another break with tradition, the Grandsphere offers the most spacious and well-equipped seats in front, while the rear bench seat is minimalist and utilitarian. “In the beginning we thought, first class is pretty cliché,” interior designer Maksymilian Nawka tells us. “We were looking at pictures of first class cabins from airplanes, but then we found these pictures from the cockpit with the pilots and the sunset, and we thought, isn’t this better than flying first class? Isn’t it better to fly the plane by yourself? So in this case the idea was born where we combined these two worlds.”

Suicide doors (without a B pillar) open to a large and airy cabin with horizontal lines running through wood trim that loop around the car and emphasise width. “The challenge was to create a lounge, a room, and just architecture, with some very defined lines in between just surface,” Nawka says. Wool and synthetic textiles cover the Grandsphere interior surfaces, and the centre console features a bar complete with water dispenser and ice cube box (and yes, in keeping with show-car-kitsch, there’s also a plant). Instead of traditional screens, an image is projected on to the wood where the IP would typically be.

“This is a really nice example of how material becomes function and how function is part of the architecture,” Nawka says. “It is exactly this Bauhaus thinking we always have in the DNA of Audi. You can still update it and bring it into this new age.” He also points out the physical buttons on the car, which allow for a tactile experience that he likens to an expensive watch. As with the Skysphere concept, the Grandsphere has a retractable steering wheel that disappears when in autonomous mode. 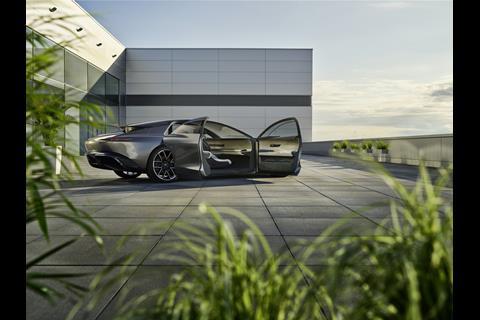 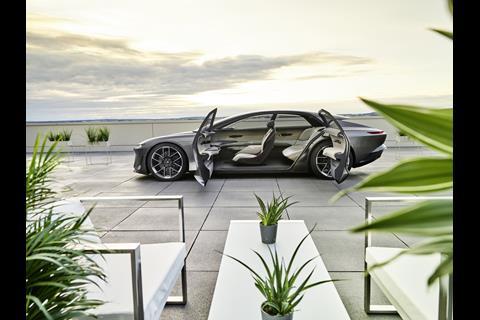 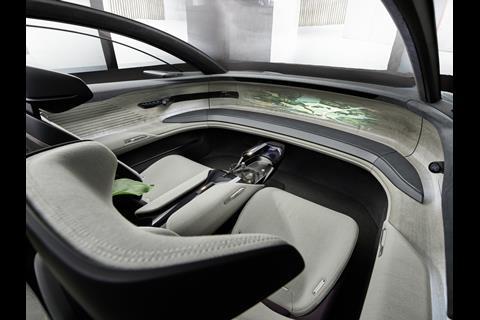 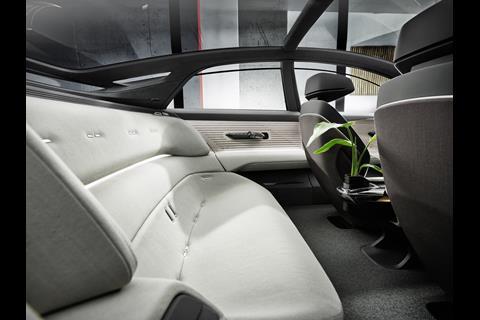 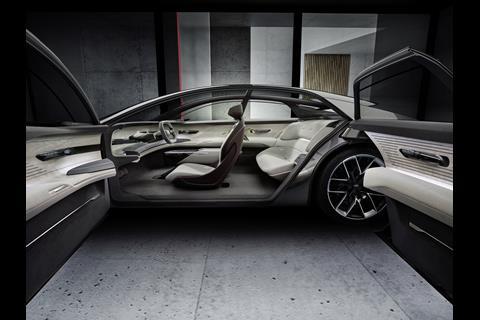 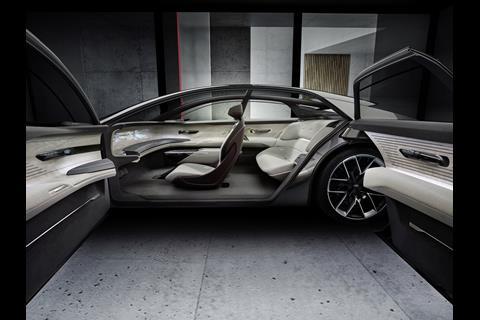 Vaya explains that putting the emphasis on the first row in the cabin allowed the exterior team to give the car a fast, GT-like silhouette. “Because the front seats became the first class row, we could do something in the rear where we could sacrifice a little bit of space,” he says. When creating the exterior, Vaya first focused on the idea of Quattro, Audi’s all-wheel-drive system, visually denoted on Audi’s vehicles by musculature above the fenders, (which Audi calls blisters). “The muscles have the biggest visual impacts from the exterior point of view,” Vaya says.

Those are connected by one clean line that runs all the way around the car without being interrupted by the rings or the lights. “Its only task is to tie the four muscles together,” he explains. “And you can so easily tie that in with traditional Audi cues like how the shut lines are so nicely ordered and placed in the most logical places.” Vaya says he wanted to clean up the front end, to give the lamps their own identity and space to breathe, and for the signature four rings have an uninterrupted position. The wide front grille is a new take on Audi’s singleframe design, but instead of cooling an engine, the design is used to hide the cameras and sensors needed for autonomous driving systems. “We didn’t want to get rid of it because we want to keep our brand identity, so we created a structure that’s jewelry-like, but it has a new purpose and it’s got a reason to be there.”

The Grandsphere concept will be on display next week at Audi’s stand at the Wittlesbacherplatz in Munich during the IAA motor show. Exhibits will be split between the indoor Messe and various outdoor locations around town. Of Audi’s latest concept, Nawka confides, “It’s the best thing I ever did and maybe the best thing I will have ever done.” And Vaya adds, “It’s like, what do you do next from here? How do you better this somehow? Maybe it’s the start of a new era where we can really experiment in new ways and see what we can take from the past and what we can do with the future.”