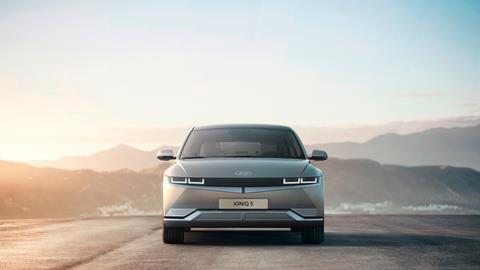 The Hyundai Ioniq 5 emerges as a clear winner in the Production Car of the Year in respected industry journal Car Design Review, as voted for by a panel of expert car designers

The Hyundai Ioniq 5 has been crowned 2021 Production Car of the Year in the prestigious industry design book, Car Design Review. With its distinctively edgy exterior and modern interior, the compact SUV was the clear front runner from the early stages of the competition.

The Ioniq 5 was pitched against a shortlist of cars launched between March 2020-2021 and voted for by an expert panel of designers from rival car makers. Judges included heads of design from Maserati, Volvo and Volkswagen.

“Once in a while a car comes along that creates an impact on the design community. The Ioniq 5 is such a car, and its impact is evident in the sketches of many young student designers,” said Klaus Busse, vice president of design at Maserati. Other judges described the Ioniq 5 as a “gamechanger,” highlighting the “striking surfaces and geometric patterns” on the outside of the vehicle, as well as the comfortable, living room style interior. There were also mentions of the “purity” of its design and its link back to Hyundai’s first ever production vehicle – the Pony.

The Ioniq 5 made its global debut via a digital event held on 23 February 2021. It marked a turning point for Hyundai, as the company has since been on a roll with a flurry of new car launches with captivating designs. The Staria MPV, for example, was also a runner up in the 2021 Production Car of the Year competition.

For a detailed look at the Ioniq 5 and Concept Car Award winner, the Renault 5 Prototype, plus an interview with Lifetime Achievement winner Peter Horbury, order a copy of Car Design Review 8.