When does a ‘New Car’ become an ‘Old Car’ and does it matter? By Peter Stevens

The McLaren F1 is now an old car. It appears on the covers of classic car magazines and is part of McLaren’s history; it is a collectors car and an investment opportunity, but of course it was once a new car and a successful one. This weekend, 13th and 14th of June, marks 20 years since the McLaren F1 GTR won the Le Mans 24 hour race in Central France. McLaren F1s also came 3rd, 4th, and 5th. 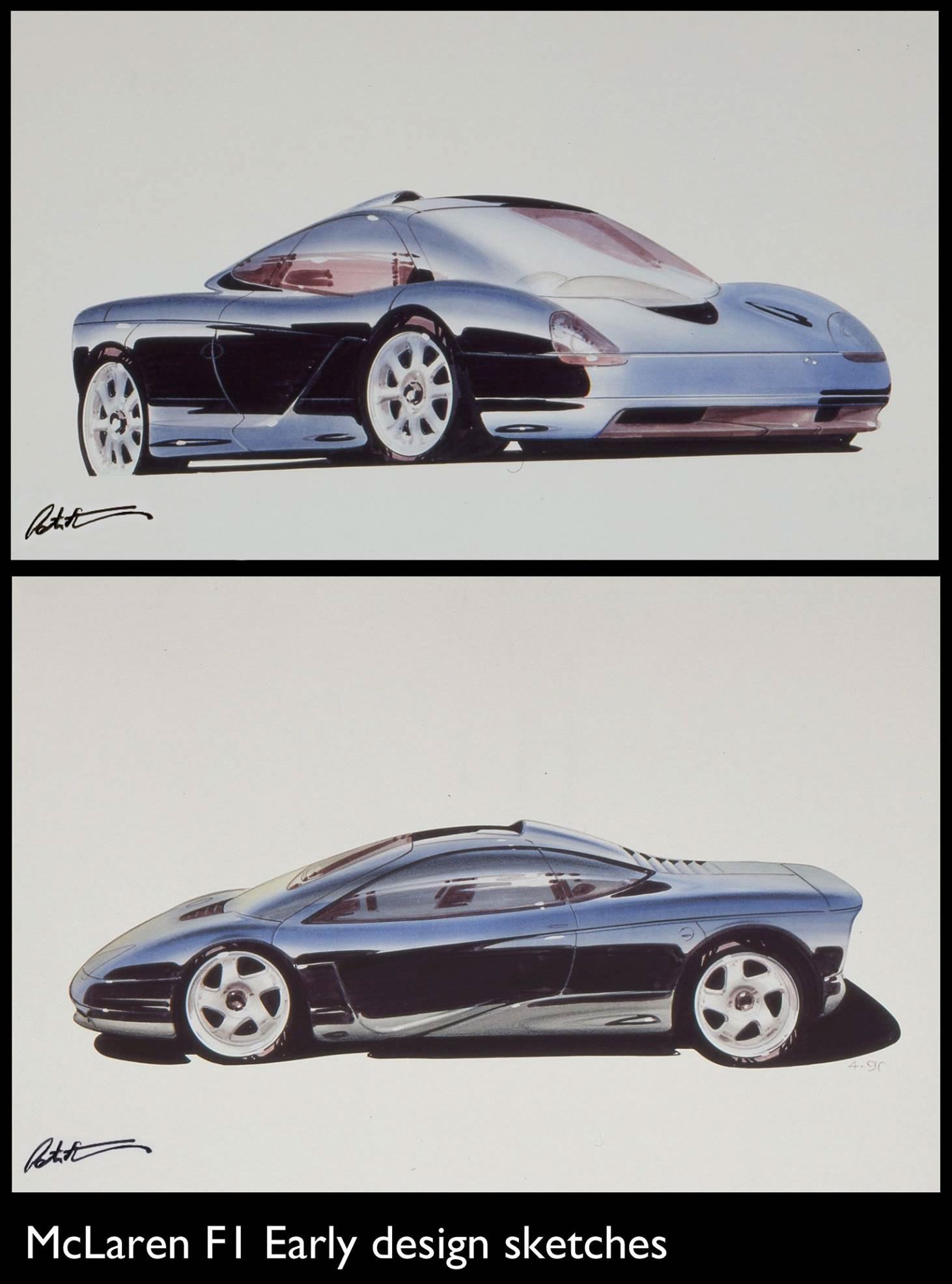 It has often been repeated that the car was not designed to be a race car, but I always thought that with the GT regulations of that time it was clearly well suited to become a competitive racer. The road version had gone from early sketch ideas to a finished design that was expensive, but with a wonderful engine from BMW it was well received by the press, public and customers. Two of those customers, Thomas Bscher and Ray Bellm suggested to McLaren that the F1 would make a good race car for the BPR ‘Karcher’ GT Championship. McLaren quickly developed a race version which by their own admission was little changed from the road car. 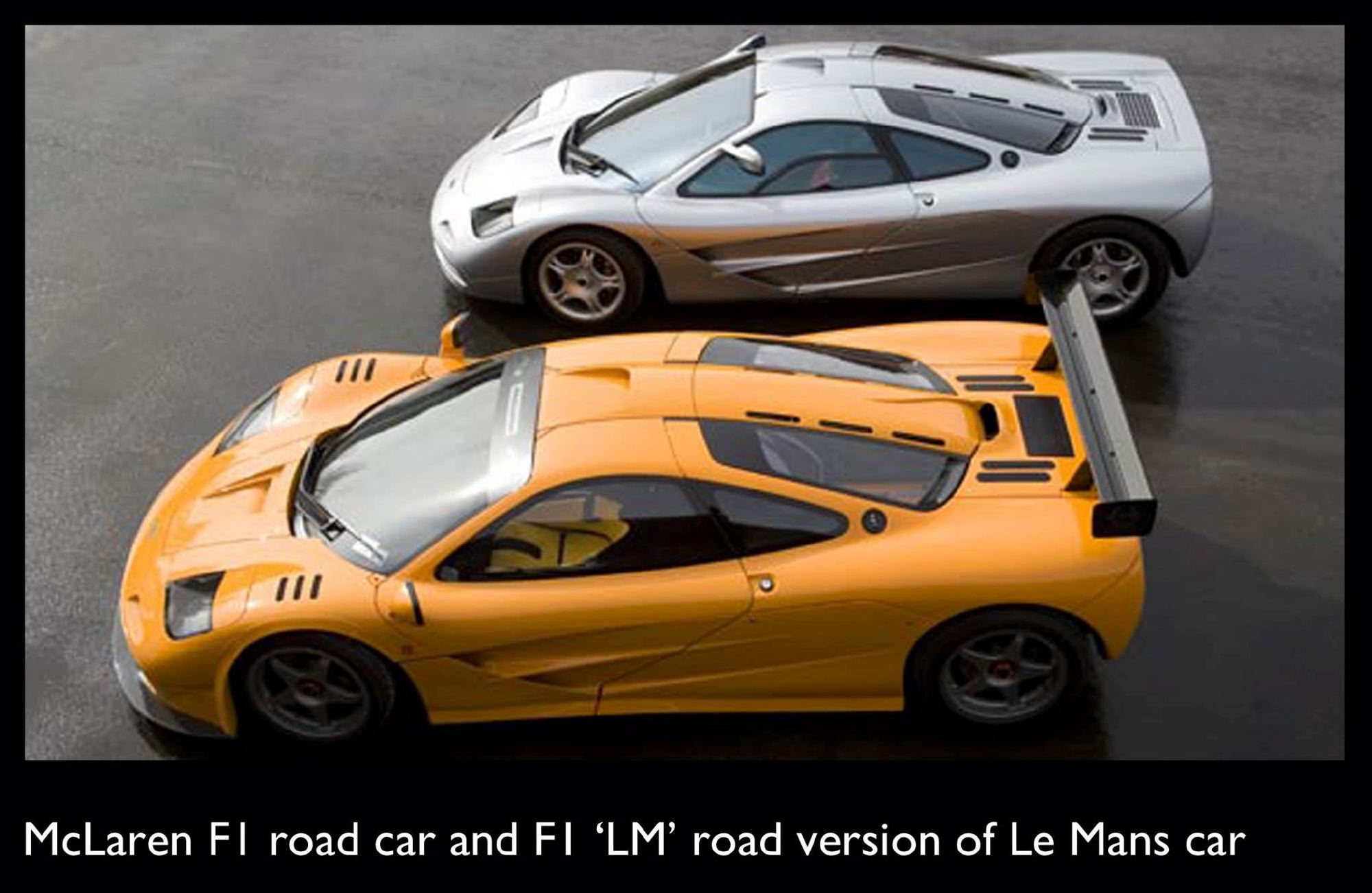 Bscher planned to take his car to a well established race team, DRP, run by one of my best friends, the vastly experienced David Price. This very fortunately meant that I was able to work with the team developing both the ‘West’ sponsored Bscher car but also the ‘Harrods’ sponsored car owned by Moody Fayed. 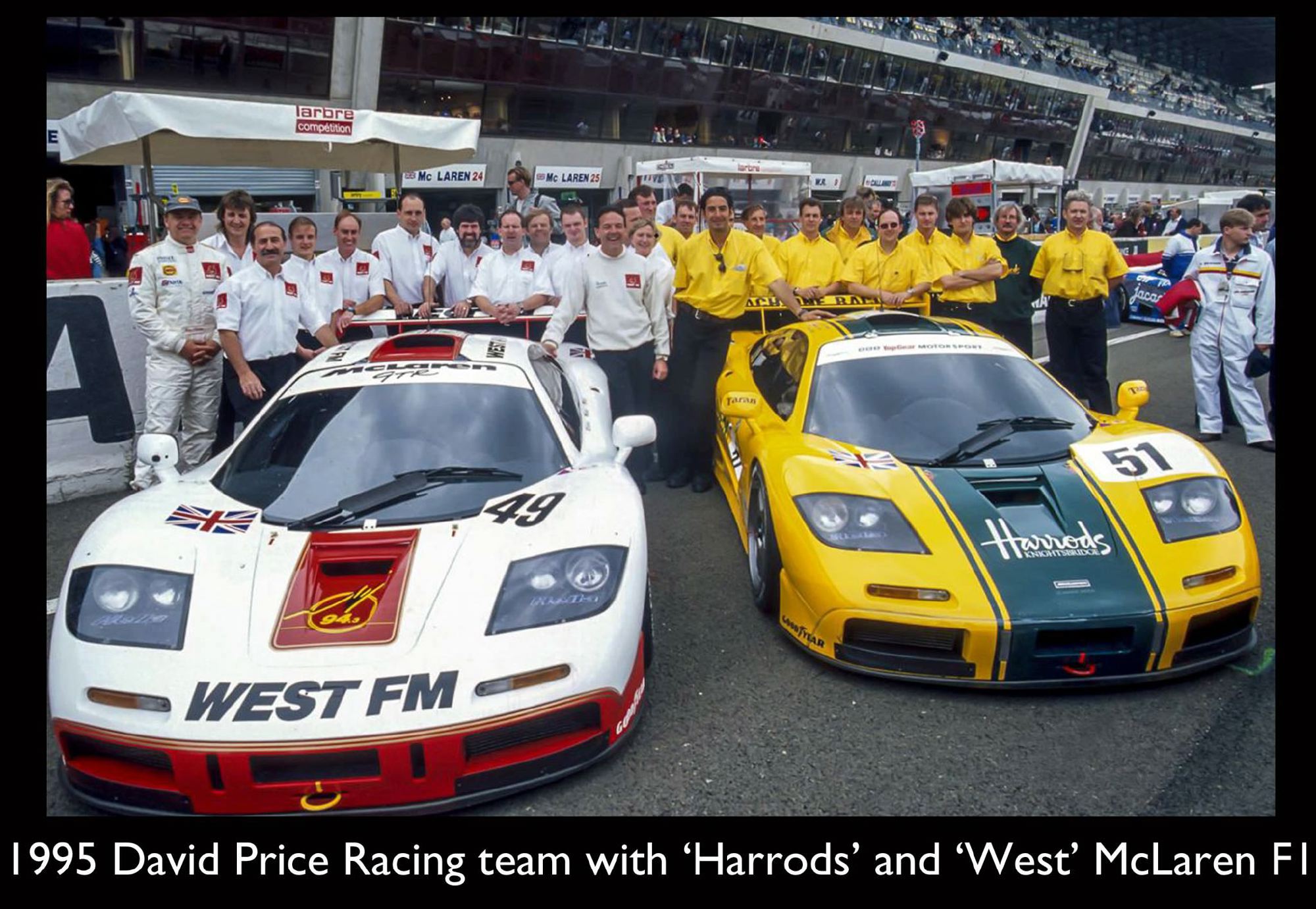 The plan was to compete in both the BPR and the Le Mans 24 hour race. For the championship the West car was to be driven by experienced but amateur driver Dr. Thomas Bscher and Dane, John Nielsen, who was considered by the team to be something of an ‘iron man’. The Harrods car was to be driven by previous Le Mans winner Andy Wallace with the highly experienced Derek Bell or occasionally Olivier Grouillard or Karl Wendlinger.

Nielsen and Bscher won the 1995 championship by a large margin from the Gulf-sponsored car of Ray Bellm; that the car was so successful was down to great driving but also a continuous development programme that saw the cars become very different from what we considered to be the ‘factory cars’ run by Ray Bellm’s team. 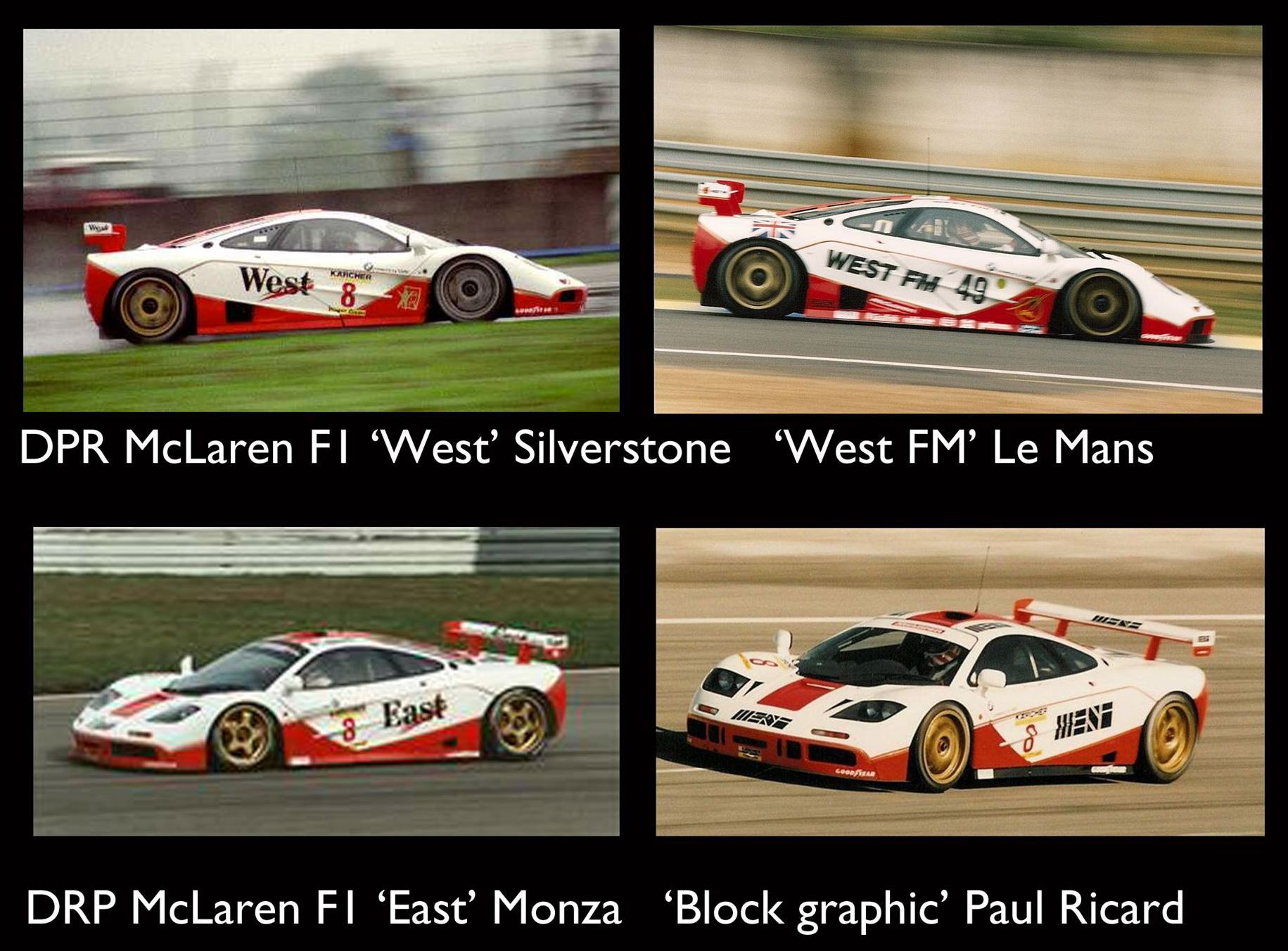 The ‘West’ sponsorship was interesting for the team; at that time cigarette advertising on race cars was allowed in some countries but not in others. Therefore the car appeared at some races with the cunning but legal ‘East’ graphic, at others with a solid block version of ‘West’ which if you half closed your eyes still looked like ‘West’. For Le Mans, Bscher and the team arranged sponsorship from local French radio station ‘West FM’, again perfectly legal but something that kept our true sponsor happy with the chance for exposure at the 24 hour race!

Knowledge gained during the development of the F1 and both Price and Bscher’s enthusiasm for constant improvements kept a competitive edge for the team. By the end of the season the DPR cars were very different in much of their engineering componentry and in their efficiency from what McLaren had first envisaged. Were we popular with the factory? I doubt it. 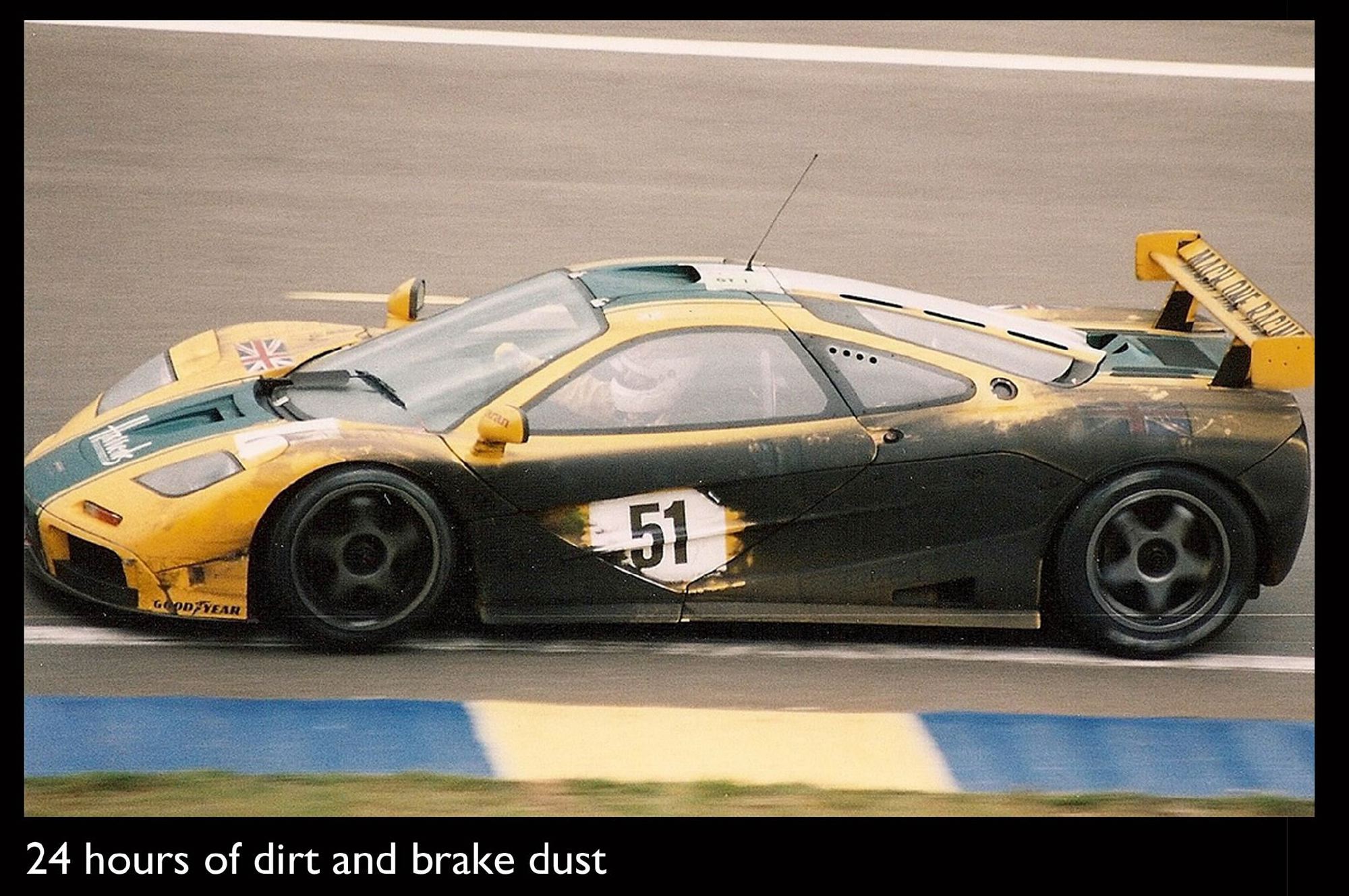 The 24 hour race at Le Mans is the most challenging event for any motor sport team and car, covering more than 2,500 miles in a day (4,000 kms) is endurance racing at its most extreme. 1995 was considered to be one of the wettest years ever at Le Mans; this was both good for all the McLaren teams because suspension and transmission would be less heavily loaded but also bad because the downforce generated by GT cars is considerably less than that of Le Mans Prototype cars. Stability under braking would be particularly difficult, as would visibility on the long straights.

During practice and qualifying on the Wednesday and Thursday prior to the race all the McLaren teams discovered a problem with the clutch withdrawal mechanism, a new component supplied by McLaren was failing on all the cars – well on all the cars except one, and that was the factory development car run as a separate team sponsored by ‘Ueno Clinic’. This car had the original and reliable components used by all the teams prior to Le Mans. 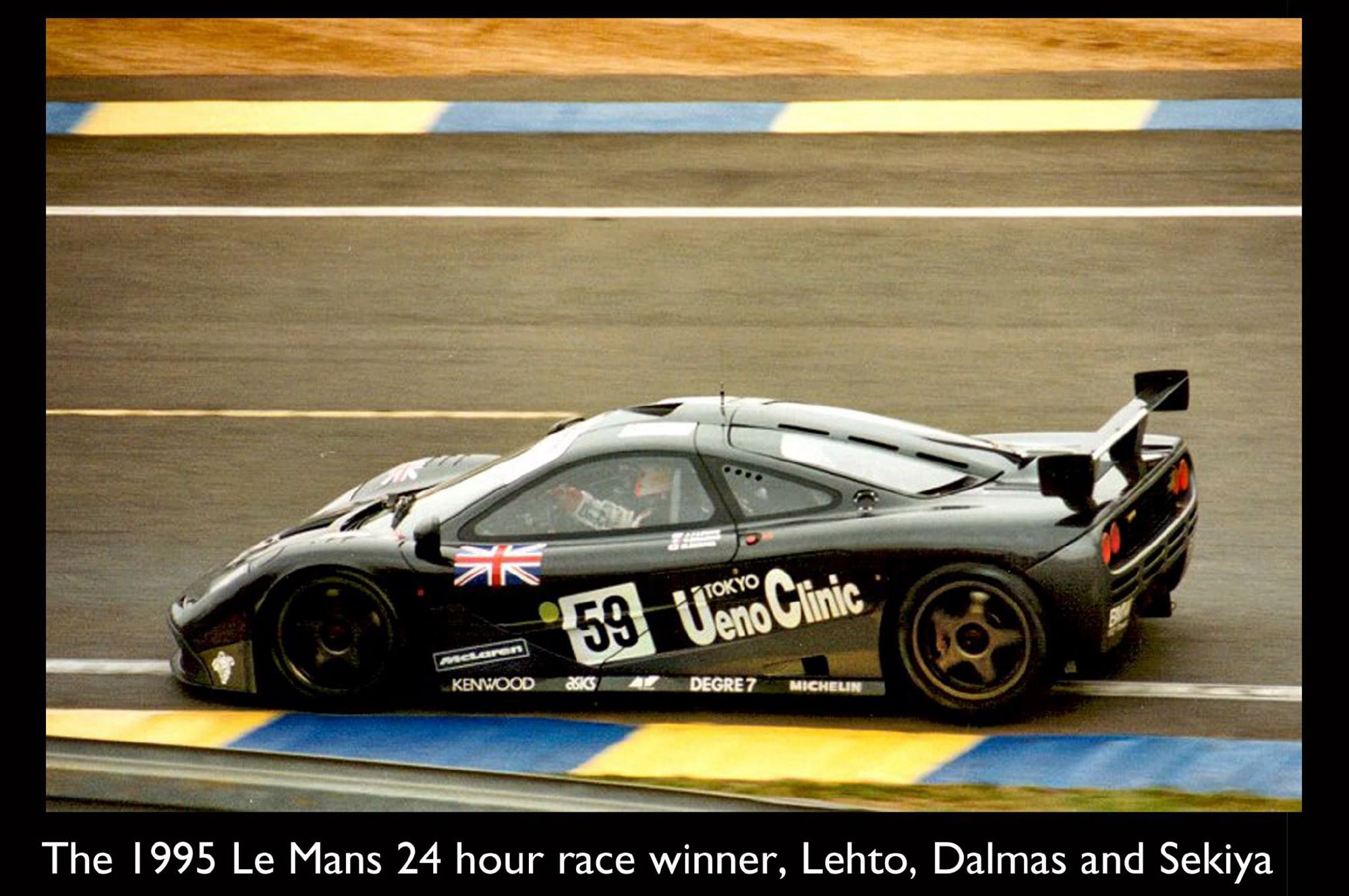 Friday morning and no solution was available from the factory, so David Price gave myself and team engineer John Piper until 5pm to try to source replacement bearings of a type that would not be destroyed by carbon dust in the clutch housing; we were unable to find a suitable alternative. All the teams except Ueno Clinic knew that their mechanism would not last the race, which was not a good way to start a 24 hour event! Just two hours after the start of the race our West car was in the lead with the Harrods car in second place.

The West car led for the next 13 hours until it came into the pits needing the clutch withdrawal bearings replacing, a one hour job at least. During the lengthy stop it was decided to replace the brake pads and unfortunately when Nielsen left the pits with a working clutch he forgot about the new brakes and left the road early on during his first lap. 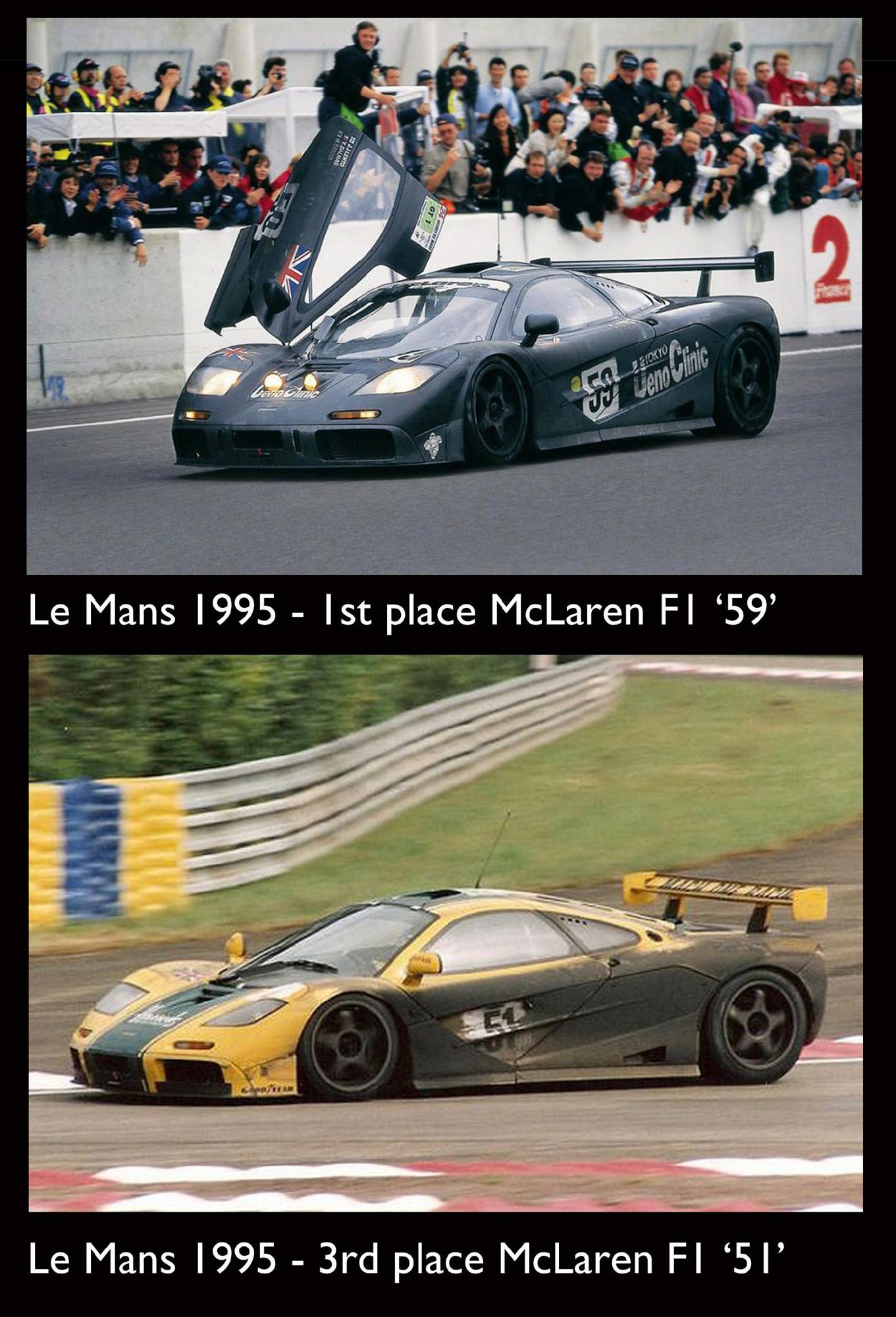 During the night-long torrential rain, the Harrods car had led the race chased hard by JJ Lehto in the Ueno Clinic car. During Justin Bell’s night-time stints in the car he managed to stay ahead of an ever-closing Lehto, the Harrods car continuing to lead for a total of eight hours before Derek Bell encountered the dreaded clutch bearing problem with car. The team tried bleeding the clutch but Wallace found himself unable to select a gear when leaving the pit. Knowing how long a change would take, Andy Wallace and the team chose to continue without using the clutch; something that would inevitably slow the pace of the car. Pit stops were a particular problem but Wallace was simply mighty in his determination not to give up, he drove the last three hours without using the clutch and finished third, just 16 miles (25 kms) behind the winning McLaren.

McLaren later produced a ‘long tail’ version of the car for the 1997 season but the car was little better than the standard bodied version and looked dreadful. Interestingly, Mercedes used an F1 to evaluate their GT racing ‘CLK GTR’ when they became engine suppliers to the McLaren Formula One Team. 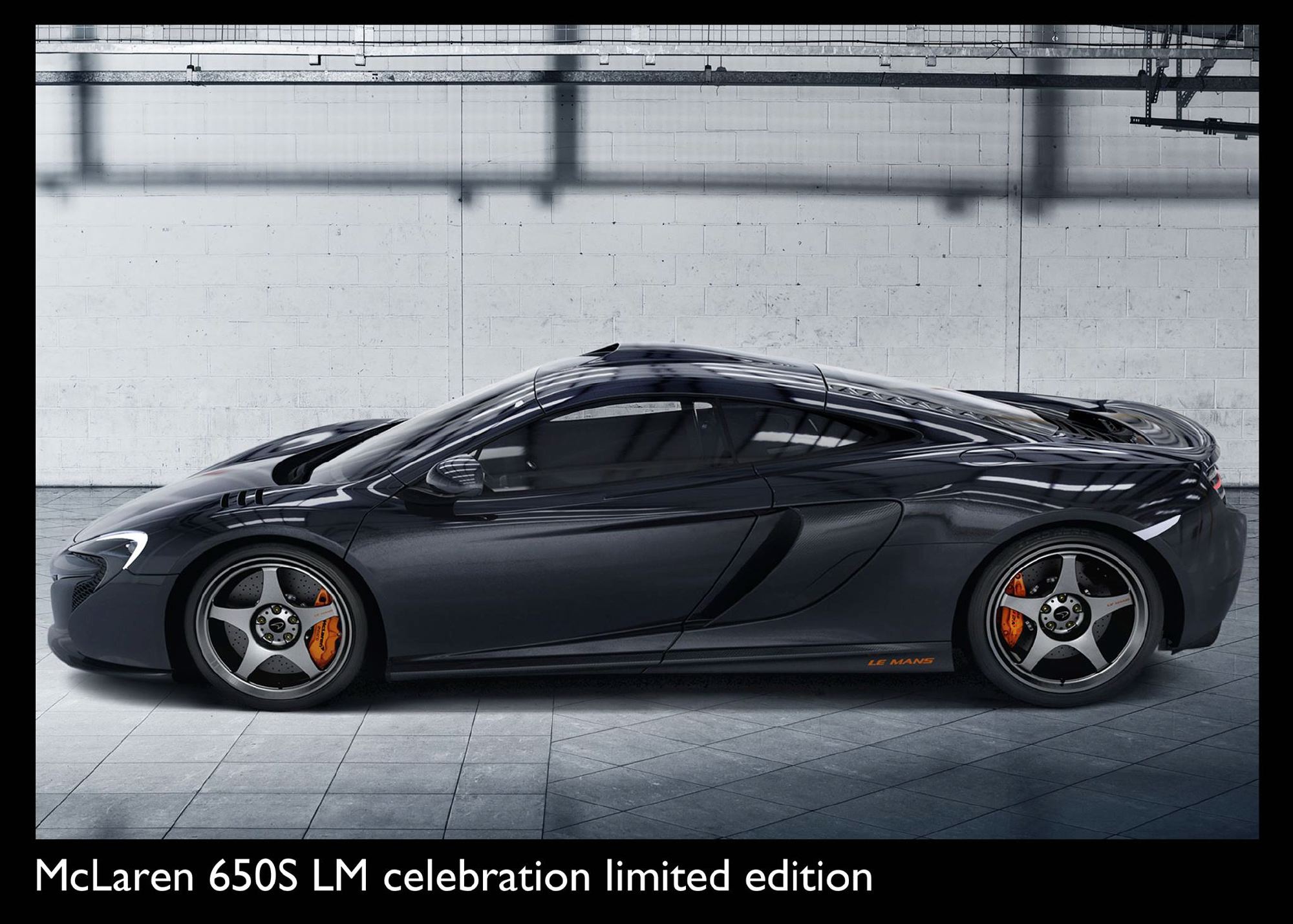 And this year, being the 20th anniversary of that historic ‘first time’ win for McLaren, the Woking based company developed a 650S LM version of their road car to be sold in a limited edition of just 50 cars. I was fortunate enough to have been involved in this programme and so was responsible for the colour, roof air intake and other details both inside and outside the car that pay homage to the winning Ueno Clinic car, but I can’t help thinking how it might have looked in either West or Harrods colours had history been a little different. But that’s old cars for you! 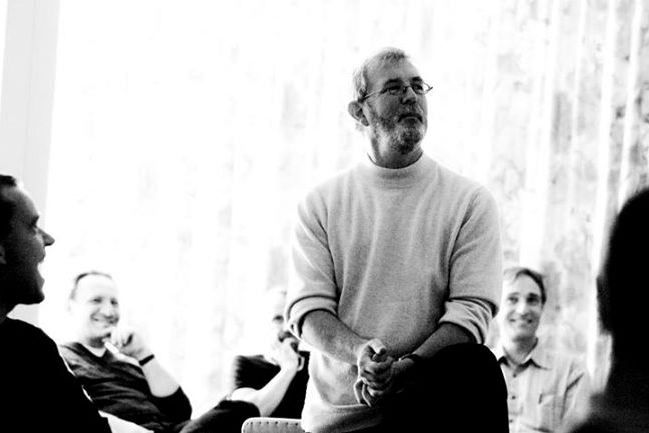 This post was re-published with the kind permission of Peter Stevens, one of Britain's most well-known and sought-after automotive and industrial designers. For more of his insights head over to his Facebook page