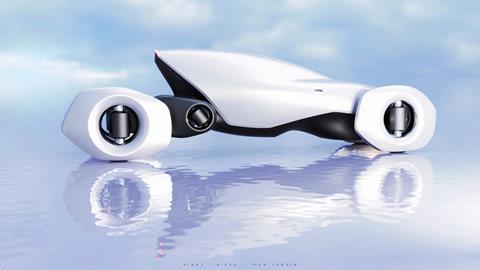 Designers were tasked with producing innovative visions for mobility in the year 2035. This year’s winning design for North America is described as exciting, thoughtful and incredibly well-researched

The North America region winner of the 2022 Magna Global Bold Perspective Award is Daniel Shapiro of the College for Creative Studies, Detroit.

Based in the US, Shaprio takes aim at the bulkiness of modern vehicles with his project, Right-Sized. “It’s finally time for a realistic systemic approach to transition society into smaller, right-sized vehicles,” he says. 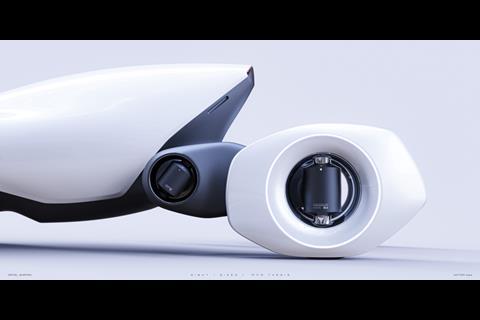 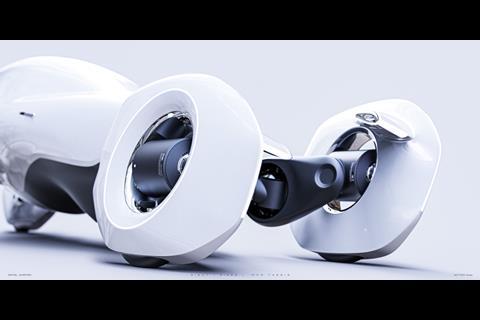 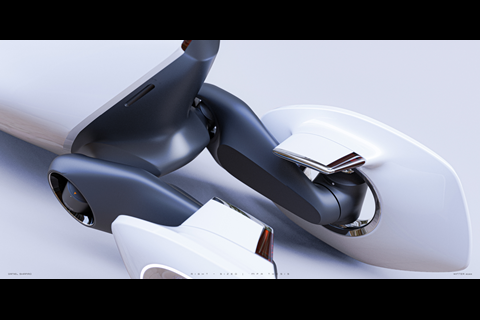 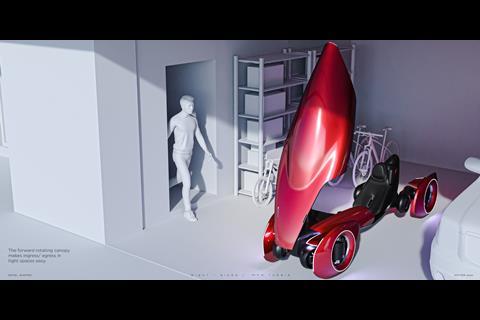 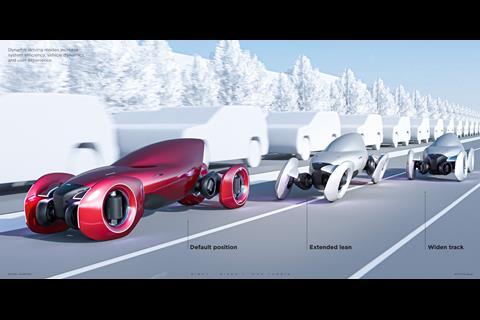 Like many concepts coming out of design schools today, this vehicle is modular and can change its shape for different situations. One mode, Dynamic Track, provides low speed stability, while City Mode offers increased visibility and agility for sharp turns and parking. Based on the premise that ‘micro-lanes’ may appear come 2035, the vehicle also supports an extended wheelbase “long and low” mode for high-speed driving. The roof and bonnet is a single unit and hinged at the front, bringing the entire top half of the car forwards for the driver to enter.

Side-by-side with a badgeless SUV (which looks suspiciously similar to an early noughties Escalade), the concept vehicle is dramatically smaller – about half as tall and half as wide. Drawing from a timeline that stretches back to the 1950s – illustrated by models like the BMW Isetta, Riley XR3 and Sinclair C5 – Shaprio points out how “there has always been a fascination” with microcars and yet they have failed to gain mass popularity due to practicality, perception and performance.

The Right-Sized concept is “excitement on four wheels,” according to awards judge Larry Erickson, global director of exteriors design at Magna Exteriors. It is “dynamic, lean and efficient,” he continues, with drivers able to minimise their carbon footprint while “maximising excitement.”

Jay Shuster, production designer at Pixar Animation Studios, suggests that mass transit might generally be preferable to personal mobility when it comes to reducing congestion, “at my centre I never want the ability to enjoy a single-seater to go away. This concept is nicely thought-out.” He recognises that although “it would require a mammoth infrastructure shift to get everyone onboard, let’s just imagine if people had the imagination to cooperate. One can dream.”

Crystal Windham, executive director, global industrial design at General Motors, describes the concept as “thoughtful” and has “balanced aesthetics well with the mission.” 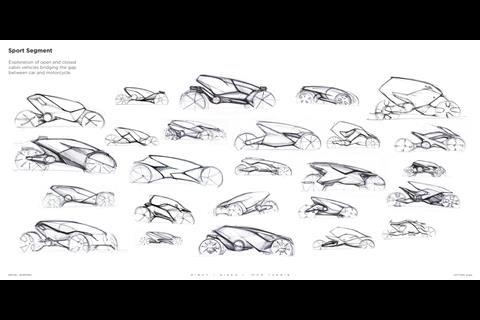 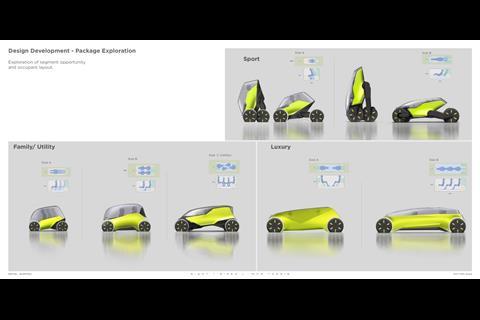 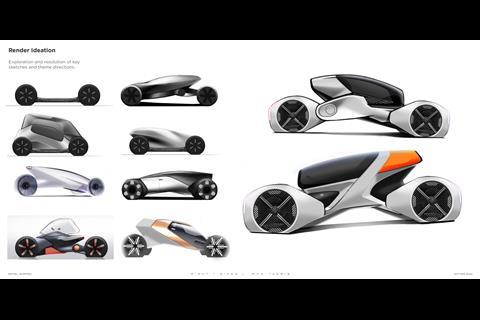 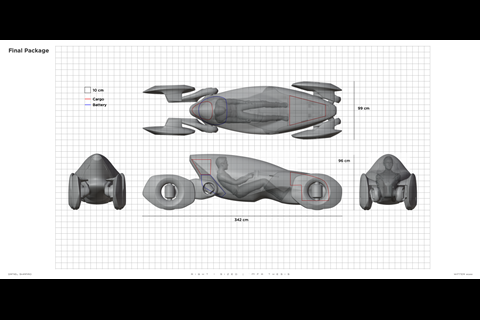 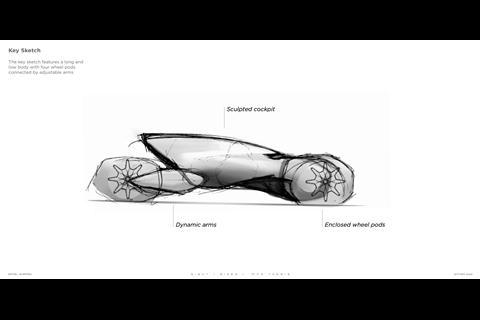 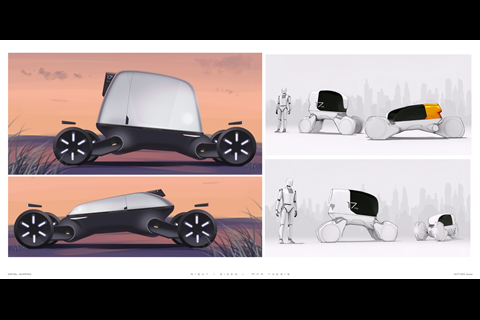 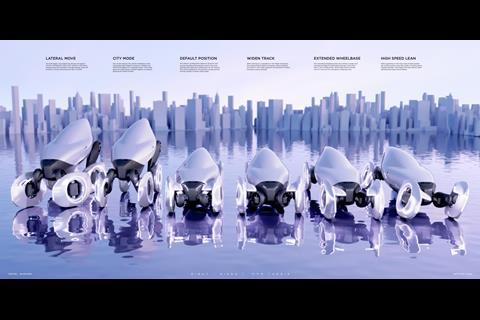 Bjorn Shuster, design manager at Harley-Davidson Motor Company, points to the timeline of microcars – “such a thorough look at the problems and history of previous products in the space” – but is equally impressed by the design itself. “Love this rebellious take on the brief! I was fairly convinced before even getting to the aesthetics of the vehicle, so only more pleased to discover an attractive shape which conveys it singular purpose without feeling cheap and utilitarian.” That being said, getting in and out “might be challenging for some older folks.”

Summing up, Liz Wetzel, co-director, transportation design at the College of Architecture and Design, Lawrence Technological University, notes: “Incredibly researched along with numerous design iterations led to a simple, efficient, and dynamic solution that met the brief.”

Speaking of the brief, designers were asked to present a vision of future mobility in the year 2035. More specifically, it is about creating “the living vehicle”, says Magna’s Erickson. Entrants were urged to consider topics such as sustainability, exterior innovation and electrification, with specific use cases for each vehicle to be outlined. And importantly, vehicles should consider the role they play in the wider environment. “We created this competition to help us understand what the future of mobility holds,” said Erickson ahead of the awards. “The designers of tomorrow play a key role in building that future.”

Alongside an overall winner, three regional finalists have been selected to represent Asia, Europe and North America. Each of the finalists will receive US$6,000 (the overall winner receiving an additional US$5,000). The global winner will be announced live on the stage during the CDN LA Forum on 17 November 2022.