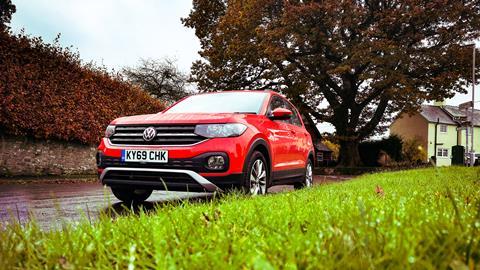 Over the past few years, Volkswagen has been busy making noise about its electric-centric design language. It showcased its ID Space Vizzion at the 2019 LA Auto Show and made a splash with the ID.3 at the 2019 Frankfurt Motor Show. It is also due to launch the production version of the ID. 4 in 2020, which will be based on the Crozz concept shown at Frankfurt back in 2017. But away from the glitz and glamour of electric launches, the company continues to push out petrol and diesel variants.

Dubbed by Volkswagen as a low-cost and practical option for SUV buyers, the T-Cross is made on the same MQB platform as smaller models such as the Polo and bigger models like the Atlas, but shares more DNA with the former. It is the most compact SUV in the company’s line-up, with a length of 4,107mm and height of 1,558mm, and is also made at the same factory as the Polo in Pamplona, Spain. 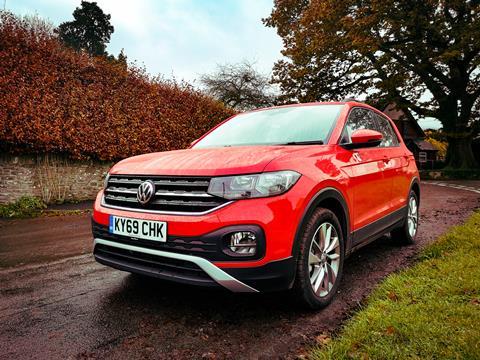 With so much competition in the SUV segment, a striking exterior design is an important means of allowing brands to stand out from the crowd. Although it isn’t revolutionary, the T-Cross does bring some interesting ideas to the table.

Volkswagen describes the compact SUV as having a ‘masculine design’ – not entirely sure what that means, but the model is certainly distinctive. The front grille is split into two sections. The lower part is slim and features at the very bottom of the vehicle. It sits beneath a black strip of bumper that embodies the fog lamps.

The upper and main part of the grille extends to the headlights, which are squashed and stretched, wrapping around to the top of the wheel arches. The lights accentuate the two parallel lines on the bonnet and underpin the vehicle’s squat, muscular appearance.

There are also three lines that run along the side of the vehicle, with the upper line dissecting the door handles before meeting the chunky rear lights. These are connected by a thick reflective band of plastic that dominates the rear, spanning the width of the car beneath the back window.

Certain aspects of the exterior change depending on the trim level. 16-inch wheels are fitted as standard, though there is the option of larger 17-inch with the SE and SEL trims, or 18-inch with the range-topping R-Line. These higher trims also come with roof rails. Furthermore, the R-Line has different front and rear bumpers as well as wheel arch extensions and side skirts.

There are a range of colours to choose from. Urano Grey and Pure White are available at no extra cost, while Dark Petrol Blue, Black and Flash Red will set you back an additional £275. Metallic and pearl effect in Reef Blue, Energetic Orange, Reflex Silver, Limestone Grey and Deep Black cost £575, and finally the metallic signature finishes of Makena Turquoise and Champagne Silver are £750. 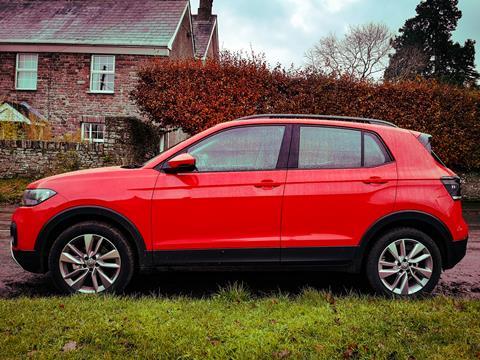 The majority of new cars hitting the market have a minimalist feel to the interior, with large screens displaying all the necessary information and allowing for a reduced number of buttons and dials. But the inside of the T-Cross does not follow suit. In fact, it is very busy.

The eight-inch screen is placed on its own layer of the dash, which is made from a hard plastic. This surface can come decorated in a variety of patterns depending on choice of design pack, one of which is in-your-face orange and black stripes. Directly beneath the screen are two air vents, also sitting on their own dash layer.

The centre console has a cluster of buttons and dials to operate climate control and a few other functions. There are also two clusters of buttons on the steering wheel, and on each of the front door arm rests. 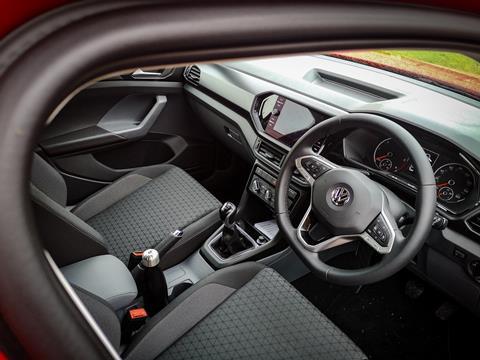 Most of the surfaces are plastic and don’t feel particularly nice to touch. However, there is a sturdiness to the interior. It is put together well, and despite its busyness, each section has been crafted and positioned within the cabin with purpose.

As expected, space is fairly limited due to the vehicle’s dimensions. The boot is relatively small and yet leg room when sitting in the back is at a premium. But all this is configurable. The rear seats can be folded down to create a large flat loading space, and they can be pushed back when in use to increase leg room at the expense of boot space. One must be sacrificed for the other.

Much of the interior is taken from the Polo. The dashboard and its components are positioned in exactly the same way. However, that hard plastic layer with the screen is made from a soft material in the Polo, and is far nicer to touch but perhaps not as functional. This is where the interior of the T-Cross really shines: functionality.

The T-Cross comes with the choice of four engine variants. There are two 1.0-litre three-cylinder petrol engines that generate either 95hp or 115hp, and a 1.5-litre four-cylinder petrol with 150hp. The diesel variant is a 1.6-litre with 95hp. The entry level 95hp petrol comes mated to a five-speed manual gearbox, while there is the option of a six-speed manual or seven-speed dual-clutch automatic when choosing the 115hp petrol or diesel variants.

None of the above generate a great deal of power, but as the T-Cross is small and compact, it feels nimble enough. The chassis is also stiff and the steering is light, making cornering enjoyable. Gear changes are smooth, as you would expect from a VW, and the suspension works well on bumpy country roads. It all feels very safe and controlled. 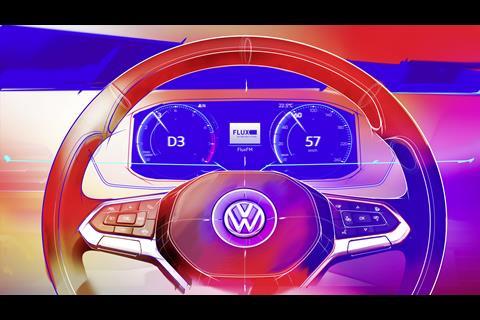 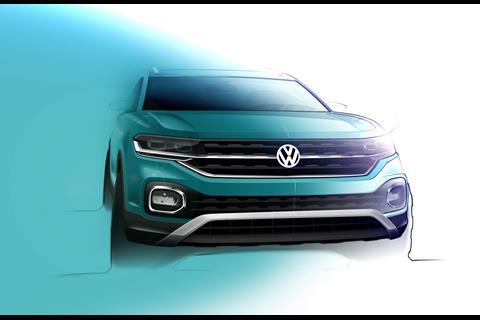 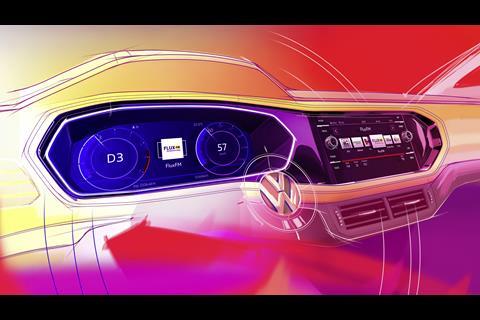 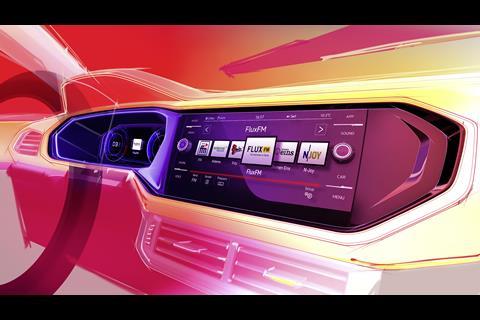 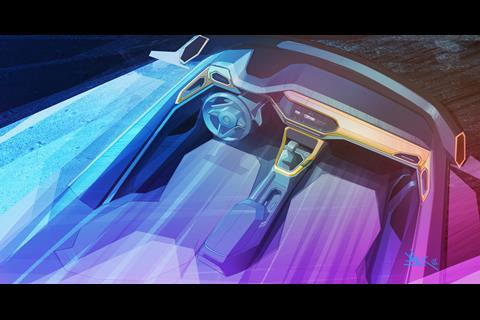 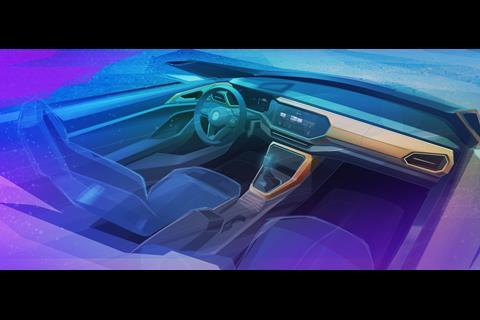 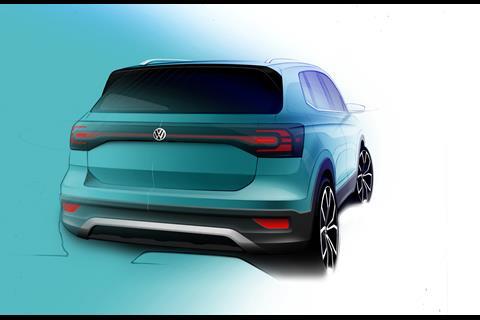 The T-Cross uses VW’s Composition Media System, which is in many of its other models. It is simple to navigate, easy to use, and the graphics are sharp without causing any lag. It can also be controlled by a passenger with a smart phone, though this is only available in the higher trim models.

VW has seemingly played it safe with the T-Cross when it comes to both the user experience and the driving experience. It’s not exciting, but everything functions as it should without any surprises. It is the result of a well thought-out model that is designed to be safe and functional.