April 08, 2003 - It is probably not a deliberate shout-out to Mick Hucknall and the boys of Simply Red, but Saturn has officially tagged the name of the vehicles that fall under its performance-tuned lineup as 'Red Line.' The first of the lineup is the '04 Vue Red Line, which will debut at the upcoming New York Auto Show.

Visually, the small sport ute has an array of plastic go-fast bits that take the form of the rockers, rear fascia, and front fascia (including black air inlets). Of course, the Vue is a polymer-bodied vehicle, so it is only fitting. In addition to which, on the Red Line the exhaust tip is chrome and the mirrors and door handles are painted body color (three colors are available: Black Onyx, Silver Nickel, and Electric Lime). The ride height is lowered by 26 mm compared to a conventional model, and there are stiffer springs for a more tuned ride. The Red Line stands on 18-inch aluminum wheels with P245/50R18 Bridgestone Turanza performance touring tires.

The standard engine for the VUE Red Line is a new V6 with 250 hp and 242 lb-ft of torque – but it should be noted that the engine is not exclusive to the performance version, as it will be offered as an option on other '04 VUEs.

Jill Lajdziak, Saturn VP of Sales, Service and Marketing, said "This specialty vehicle breaks new ground in the small SUV market and is positioned at the intersection of three important industry trends: surging small SUV sales, strong truck personalization and sport tuning." It will be followed by a Red Line ION quad coupe, with the 'quadness' coming from reduced-side suicide doors that first appeared on one side of the Saturn SC coupe. 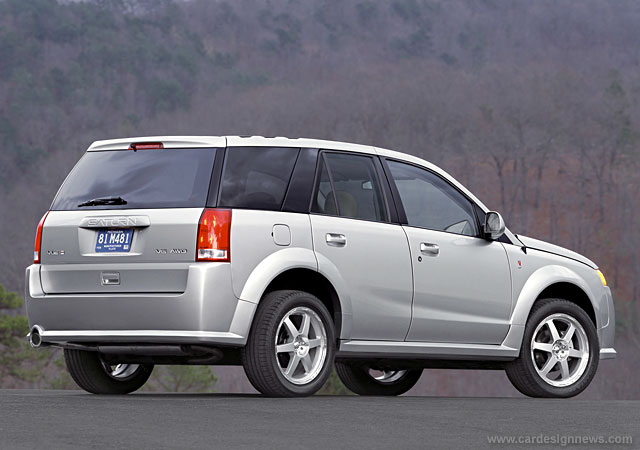