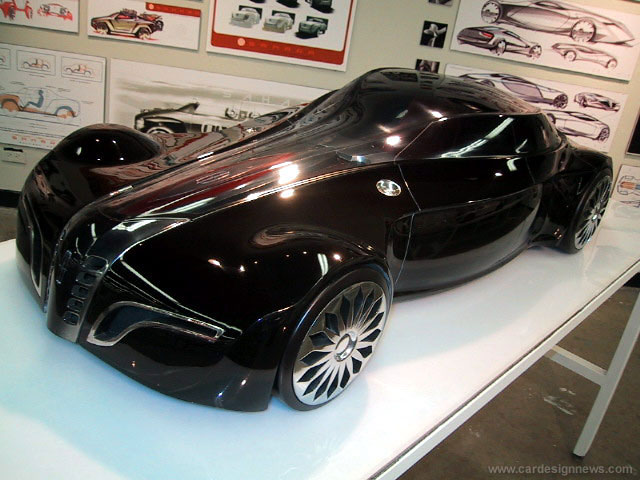 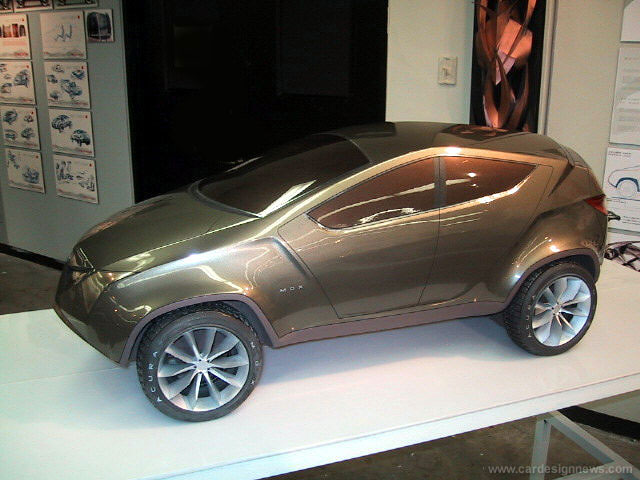 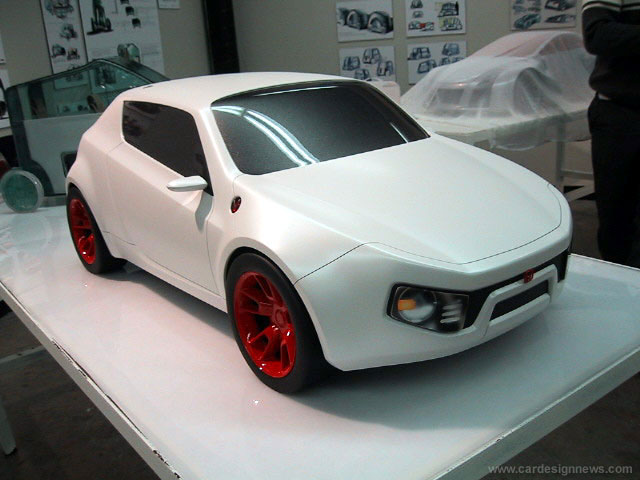 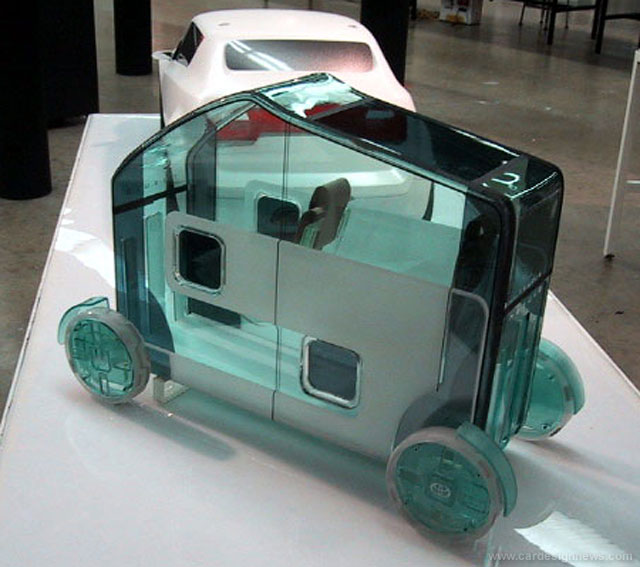 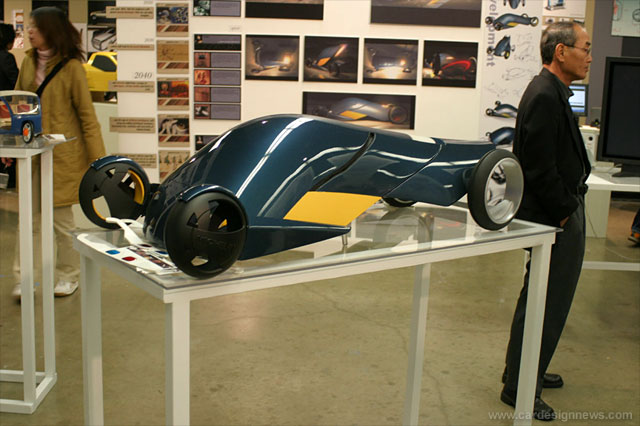 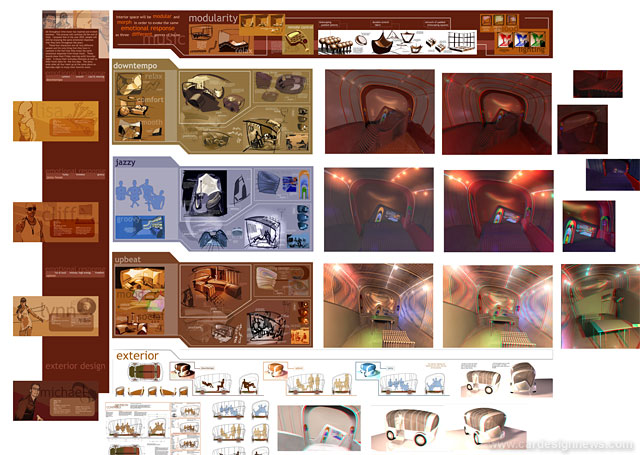 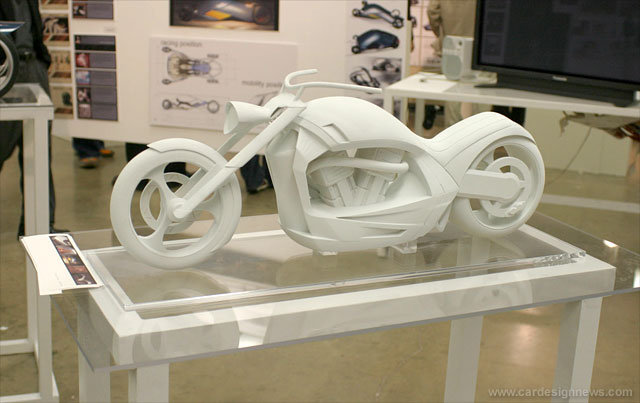 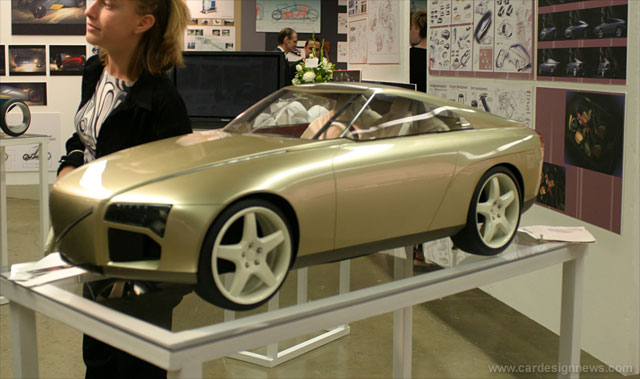 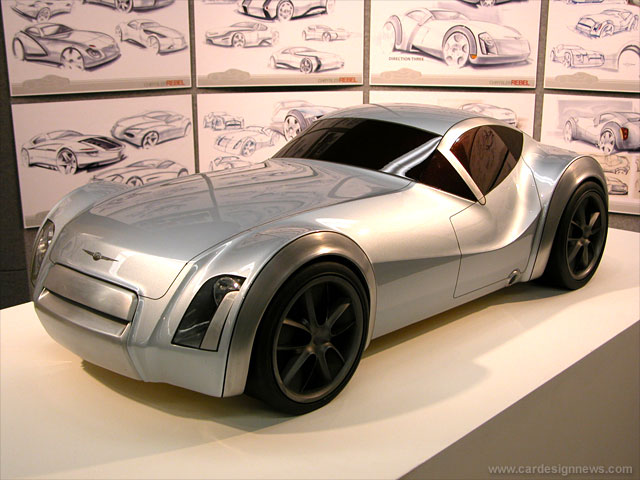 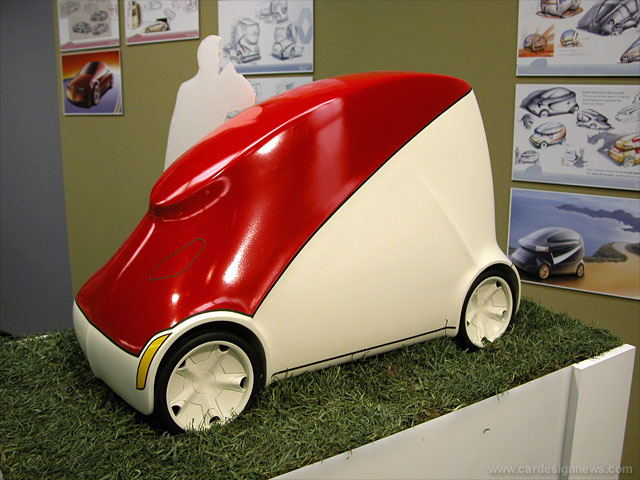 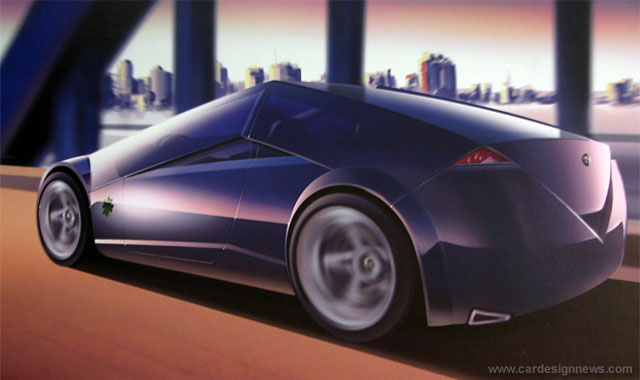 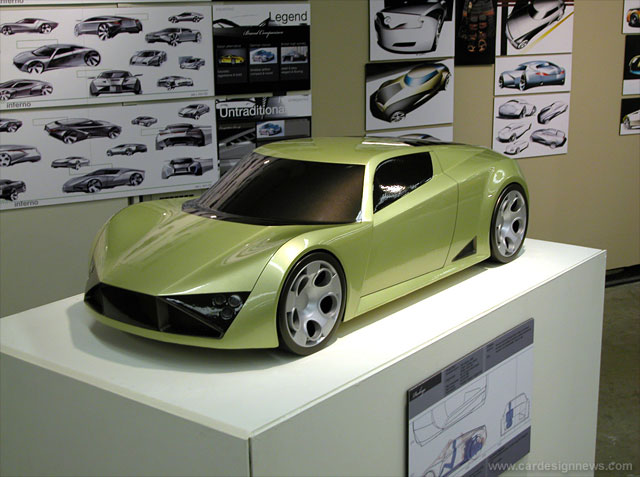 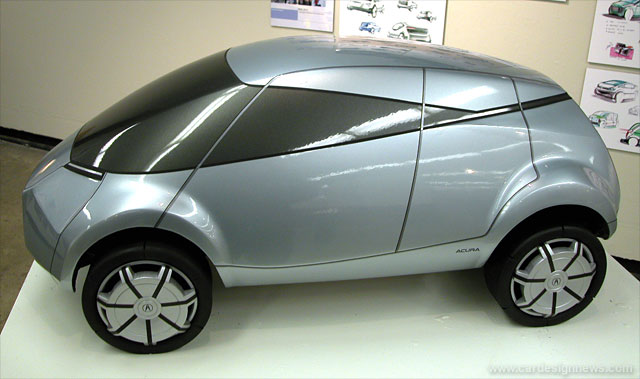 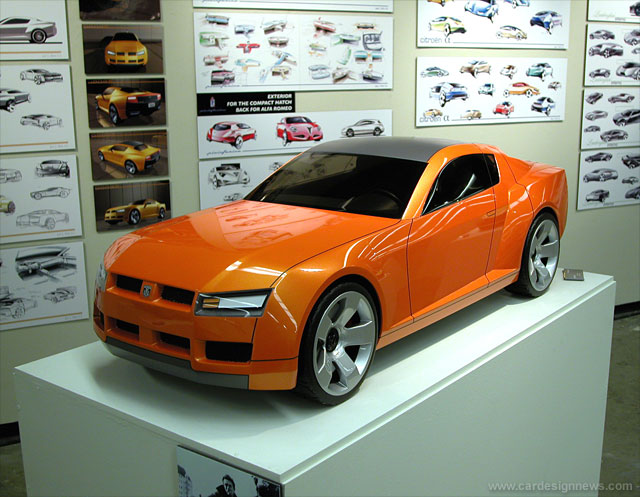 The name 'Eros' was derived from the Greek god of love, the concept behind the project was to create a vehicle for the god of love.

A direct competitor of the Cadillac Sixteen, the Eros aims to combine a feeling of romance and passion with classical elements from Lincoln's history. The Eros features a single driver in the front and comfortable seating for three in the rear. This allows the owner of the Eros to have a commanding position while driving, and also allows for a private chauffeur when the owner would like to travel with his guests in the rear seat.

The Acura MDX concept 'Sculptural Kanji' is based on two-dimensional Japanese Kanji characters that were transformed into 3D surface languages. The shape extrusions were then translated to portray the simplicity and power of the brush strokes. Imai's goal was to create a global look for the Acura brand, yet remain sensitive to the Japanese aesthetic.

'Journey to the Unknown' was the title for this project. The concept behind the Sahara was to combine a truck, rally car, and a dune buggy to create the ultimate lifestyle vehicle. The Sahara was inspired by Baja race trucks and is designed to handle all terrains. Removable polyurethane fenders and roof enable this vehicle to convert from a truck to a dune buggy for beach outings.

The Rocketbox is a small compact car developed especially for the import-minded Gen-Y racer. Designed to be purchased at a low cost, and modified by the owner as their budget allows. The styling image is 'a bulldog on a chain' - leaning forward in an aggressive stance, ready to be unleashed by the owner. The racer features a supercar-style hood for easy engine access, and video-game style buttons for the hood and door handles. Changing the look of the Rocketbox is easy with modular lights, buckets, and room for expansion.

Addressing the horrors of commuting in the Los Angeles area, the Nevula aims to give commuters a new look to the daily hassles of getting from point A to point B and beyond. The Nevula is an automated system that picks up and drops off commuters individually, links up to form high-speed clusters on the freeway, and drives in designated lanes when a common route is shared.

Studying scenarios from three futurologists, Heather mixed the stories together to come up with the story of the future, which turned out to be fairly pessimistic. Heather saw it as an opportunity to design an optimistic future. Noting in 2050 there would be a great need for entertainment, Heather believes the driving experience will come back full circle. Designing for this time period gave her options to solve problems for the future, such as driving as a luxury, and racing as entertainment. The Vita will be for both mobility and racing, with an expandable frame in order to provide for a new racing position on the stomach. The exterior was designed mainly from function, the sport mode looks fast and extremely aerodynamic.

The project was to design the interior of a drive-by-wire vehicle as an environmental space that needed to be furnished. A blue sky project with no limits, Heather developed the space to be modular and morph to evoke the same emotional responses as three different genres of music. The floor changes in order to create a down tempo, upbeat, and jazzy mood, and the interior morphs in order to carry the correct number of people for each tempo, made possible with a network of padded telescoping spheres. 'Jazzy' will have four people relaxing in 'kind of a groovy situation'. The upbeat interior would be very social, loud, and have at least five people. The down-tempo would be very comfortable and mellow with only two people inside. Lighting and color play a large role in the change of modes.

This project was designed on an internship at Kawasaki with design director Mark Knight. It has a 2-liter, liquid cooled engine, with design inspiration from Diesel clothing. The bike package inspiration is from the American Iron Horse Sniper because of the low and fat stance, and this makes the bike look extremely powerful and strong. There is also some sport bike inspiration in the bottom faring as well as the frame. The tank is large and the seat is flush to the edge of the bike. The color and trim of the bike was inspired by some of the furniture and products found in Wallpaper magazine.

Volvo 'Hang on to your image vehicle'

This project was done on an internship at Volvo Monitoring and Concept Center, and was inspired by the 1930s, specifically fashion and cars of the 30s. To create a potential buyer Heather researched a week of the customer's life. The customer is divorced with two kids and is a young parent. She wants a car that can be both for driving with and without the kids. The back seat faces backwards to lower the back and still be able to have people fit comfortably. This also allows the children to have an entertainment center lined on the back of the interior. The exterior is a new interpretation of a sporty Volvo. The hard top convertible closes off the back two seats so that the car can be a sedan as well as a roadster.

The project was to propose a vehicle for Chrysler using an existing package. The concept of Rebel is derived from 50s-60s street and hot rods. James Dean is a good example of the attitude and image the car reflects.

The Apple Mobility was designed for the Los Angeles freeway system, using existing infrastructure and smaller vehicles to help relieve the traffic situation. The vehicle is based on the Apple brand using a 1+1 configuration. The Apple Mobility vehicle is small, inexpensive, safe, fun to drive and uses environmentally friendly fuel-cell technology.

The concept is based on '91 Alfa Romeo SZ. The goal of this project was to design a vehicle for the year 2015. Egyptian pyramids and the Stealth bomber inspired Dmitriy's design. Some consider the '91 SZ unattractive while others absolutely love it. Dmitriy wanted to push that idea even further with the design being bolder and more aggressive. The vehicle became wedge-like, body-colored glass technology was used to reinforce the concept.

The Inferno is an affordable two-seater mid-engine sports car for Lamborghini, similar in size to a Porsche Boxster.The design concept was to create 'the Italian Beauty and The Beast' by blending sculptural and machine-like surfaces together with unique transitions and controlled curves.

Acura CUV is the next generation RDX. It is a compact urban SUV for people who are in creative fields to carry their hi-end gear safely and securely. Featuring a creative territory that stimulates creative professionals to search for ideas and inspirations. The design concept reinforces the artistic and warm aspect of hi-tech design.

The Nemesis is a modern muscle car for Dodge. It is Dodge's answer for people who look for performance cars with true American attitude and practicality. The design features the utility of a four-door car, with complete rear headroom and a sub-door with room for four adults. The design concept was to create an America authentic power machine drawing on themes from the Stealth fighter, with Dodge's Hemi heritage.

The student's projects are largely developed using traditional methodology, taking 2D sketches and drawings to an orthographic 1/5 or 1/4 scale tape drawing, from which a clay model is developed, painted and detailed. Sketches and concept drawings are increasingly generated using computer-based applications such as Alias StudioPaint and Photoshop, while the tape drawing is executed with the help of Adobe Illustrator and the model built and rendered in CAID packages such as Alias AutoStudio. Models are also physically generated from 3D data using the school's rapid prototyping facility, which allows the students to have their models milled out using the 5-axis CNC mill.