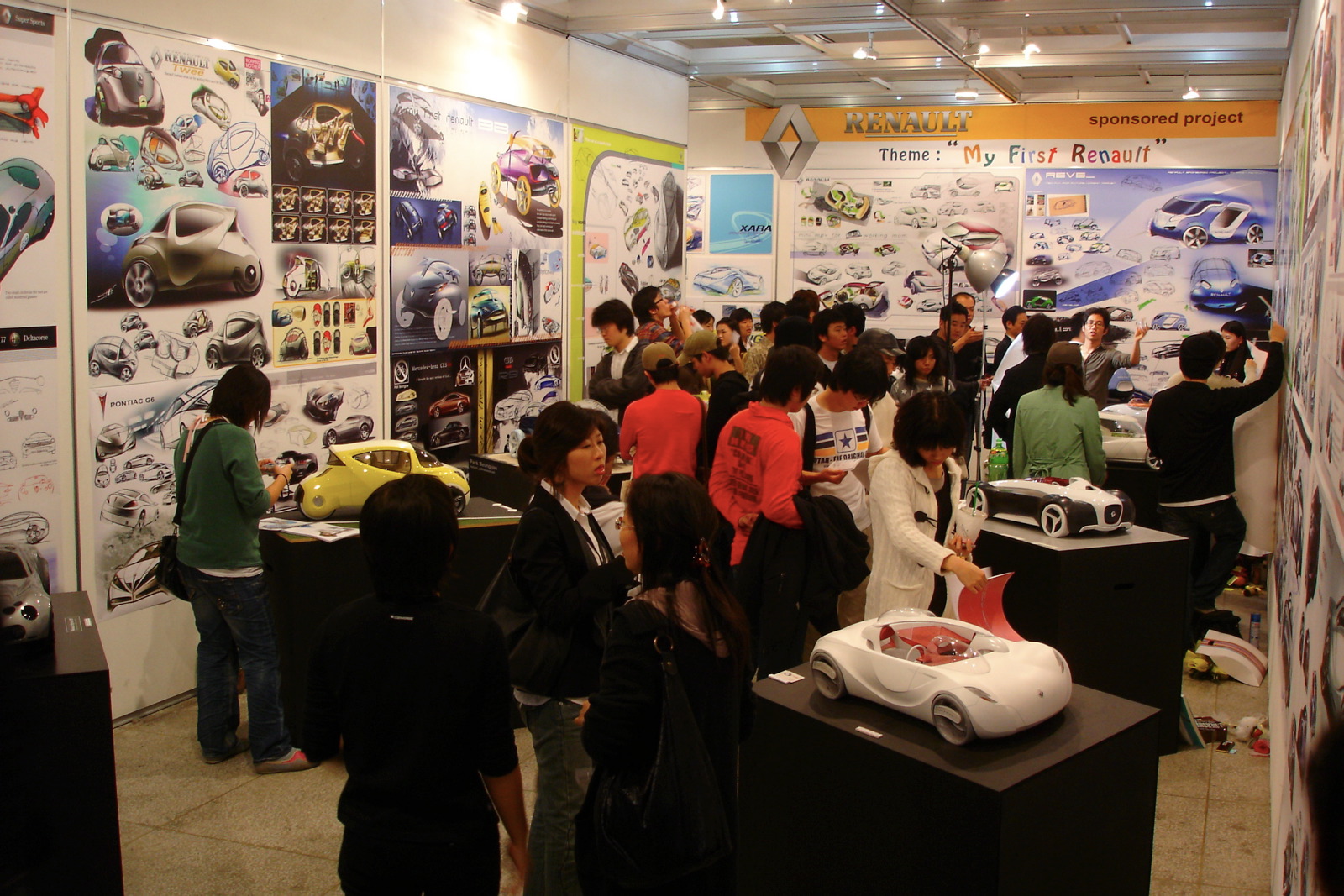 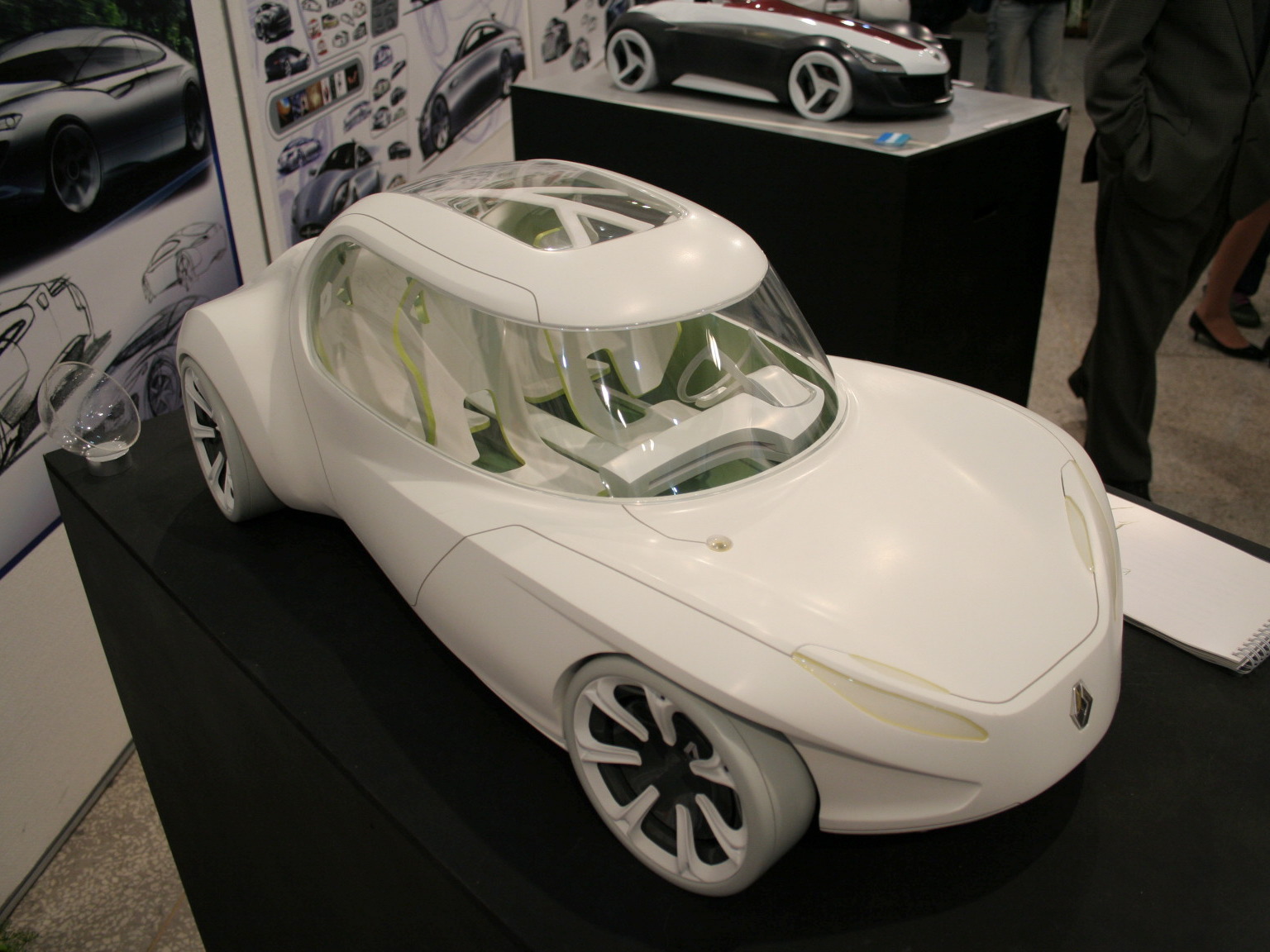 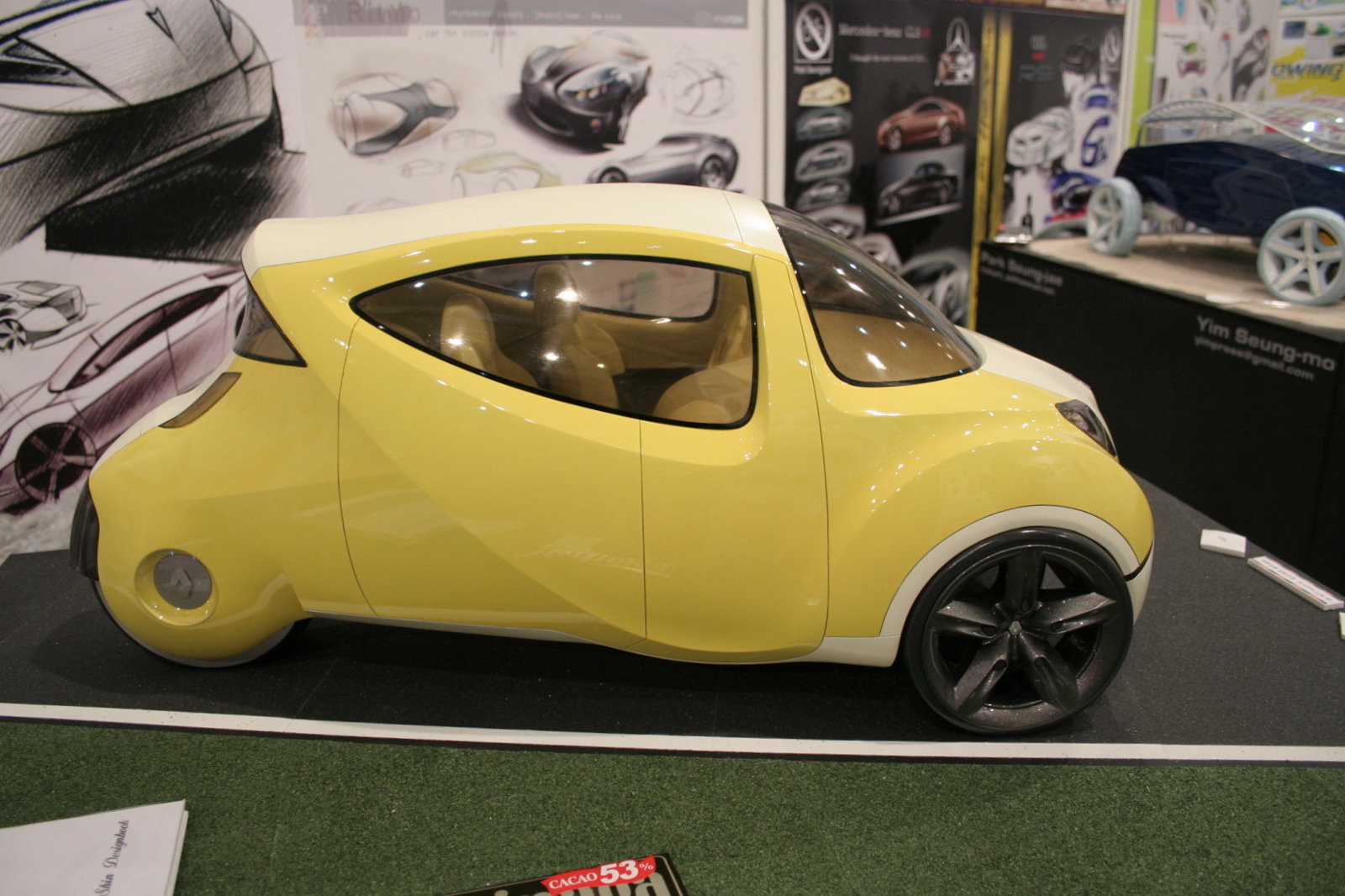 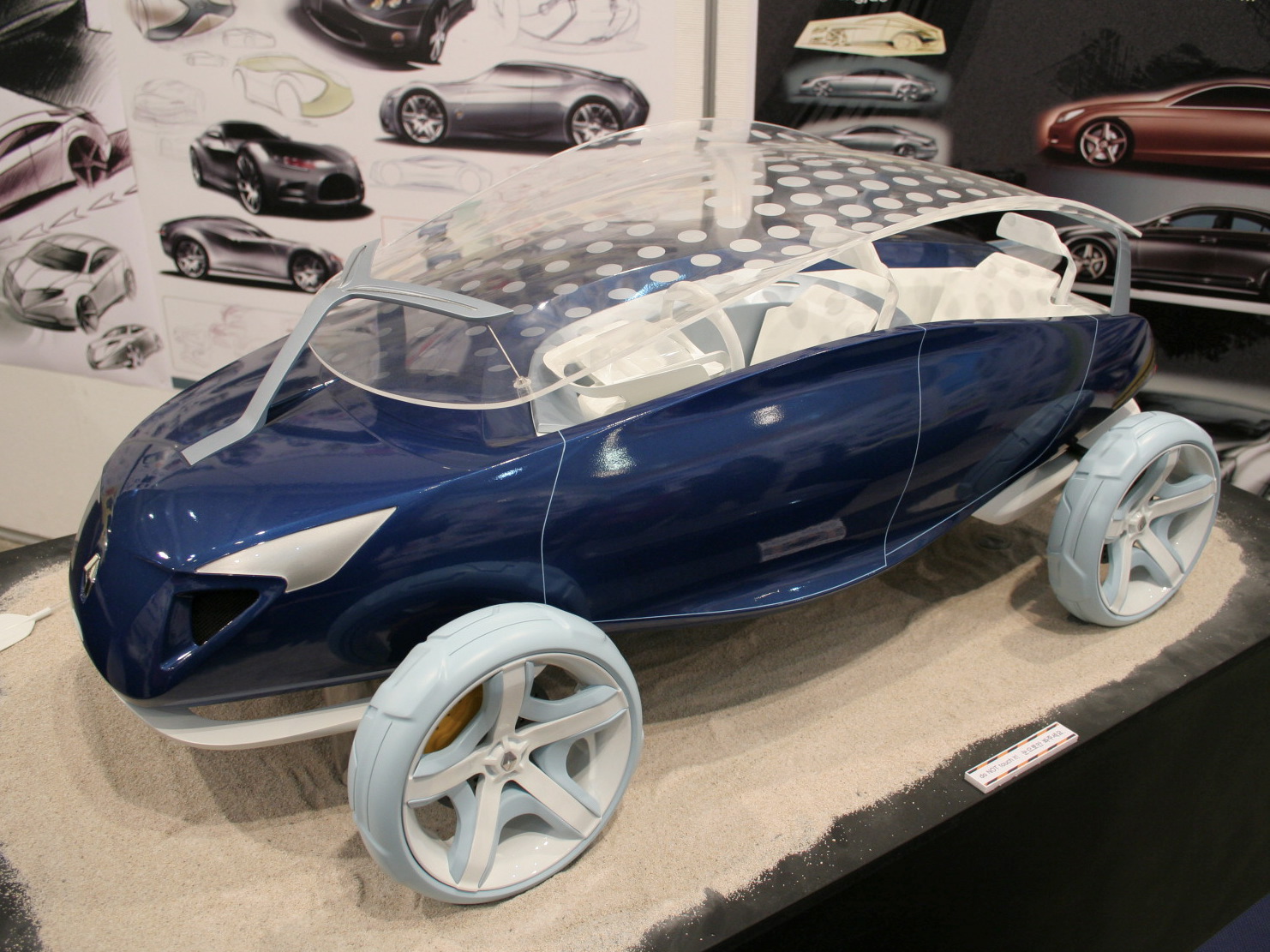 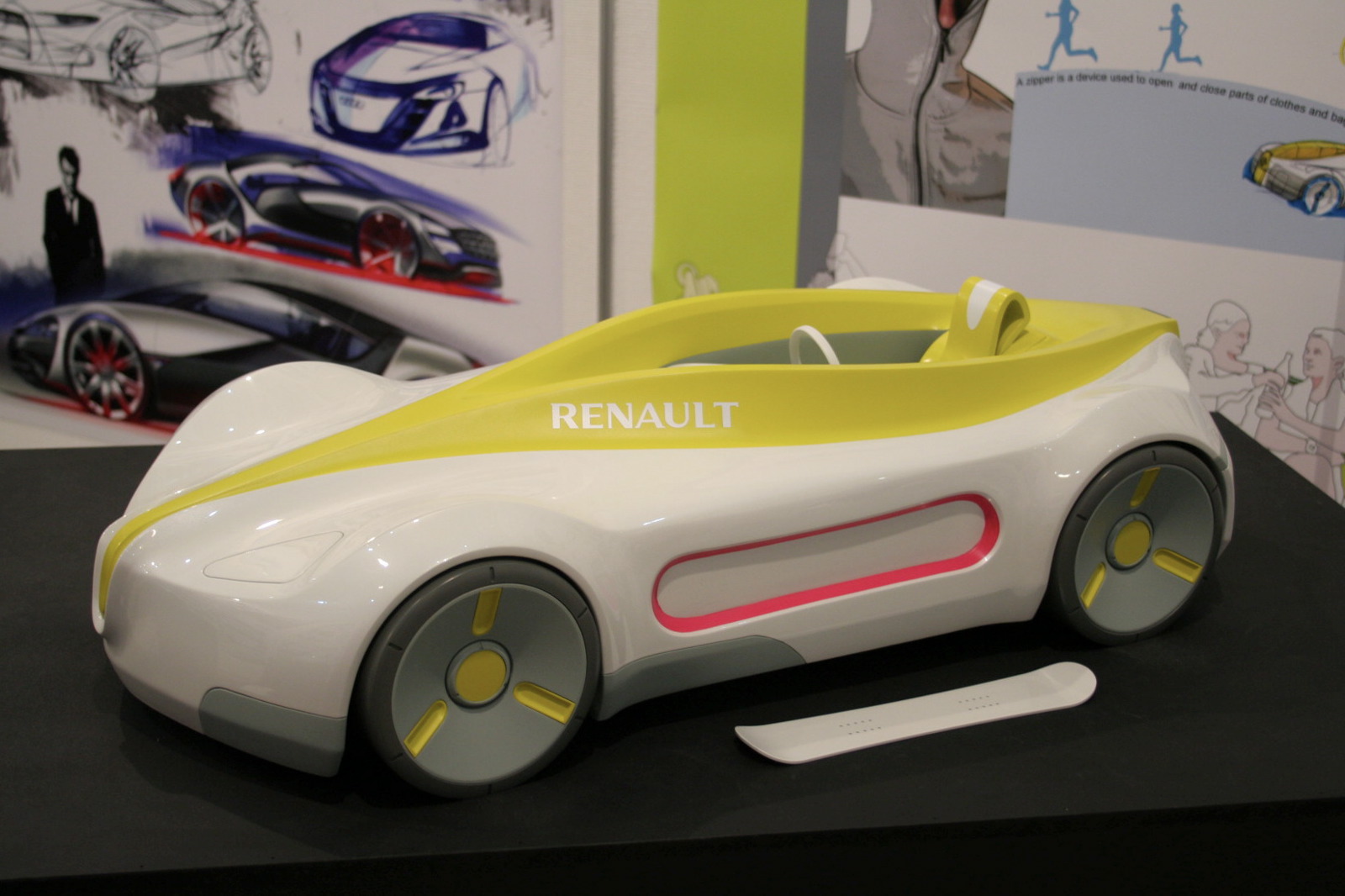 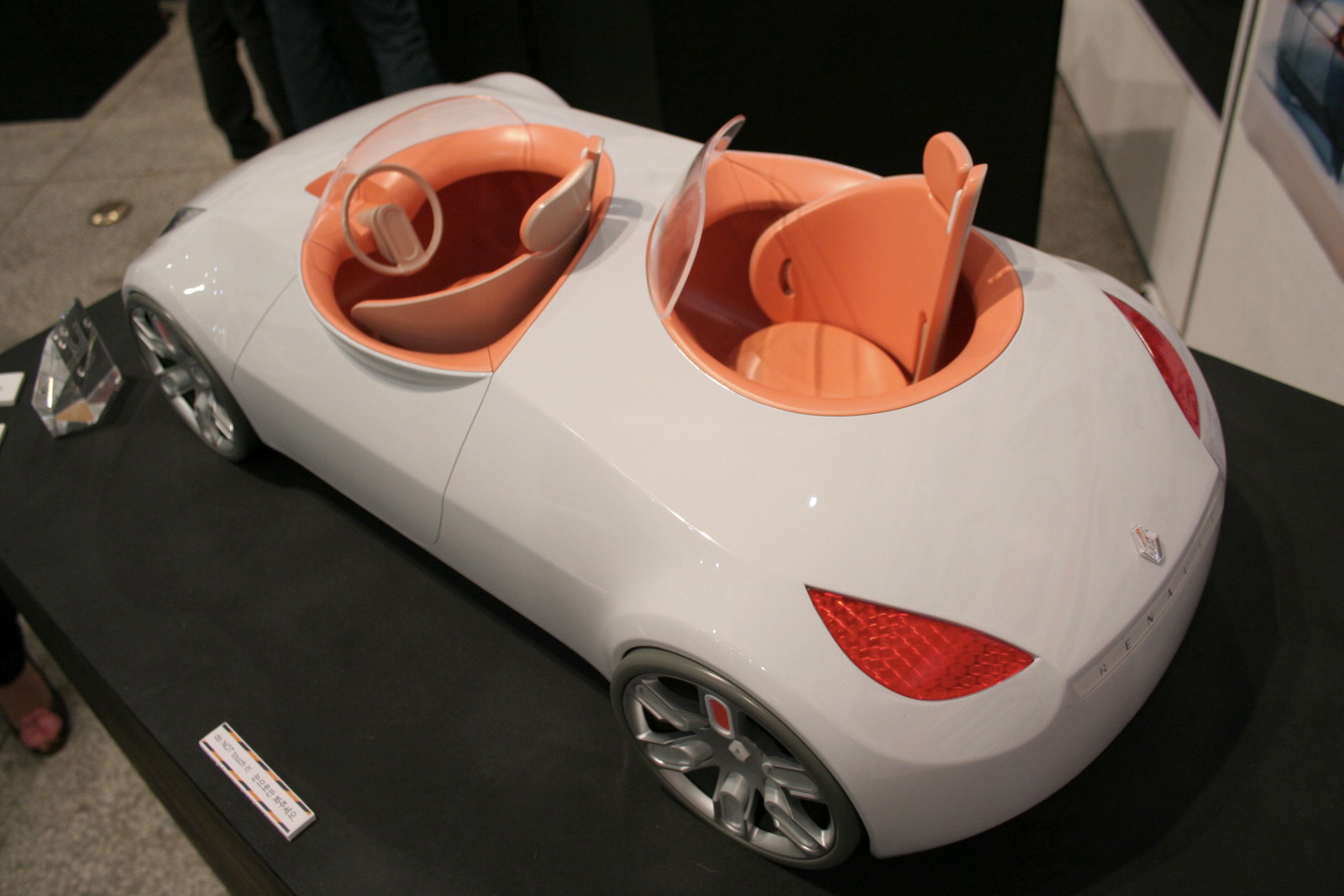 Senior transportation Design students at Korea's Hong-ik University presented their works in the School's Graduate Exhibition 2006 held in October. Running from March 4th to July 10th, the Renault-sponsored project with the theme 'My First Renault', gave the students a fairly open brief to design a personal vision of a Renault vehicle of the near future.

The students also had a presentation with Patrick Le Quement, the Renault senior vice president, corporate design, Anthony Grade (vice president) and Jean-Marie Hurtiger, the executives of Renault-Samsung Motor's in their design center in Gi-heung, Korea in November. 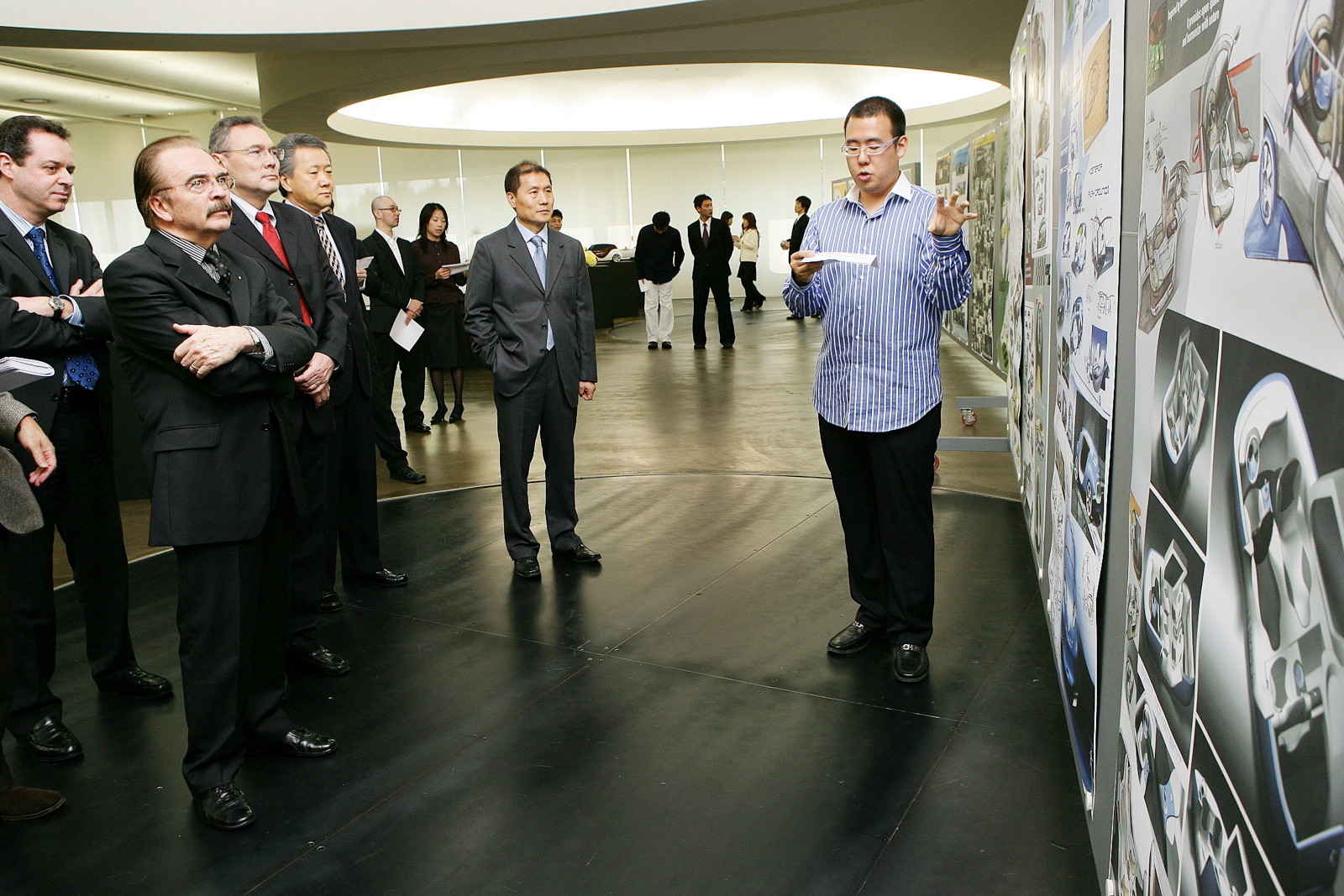 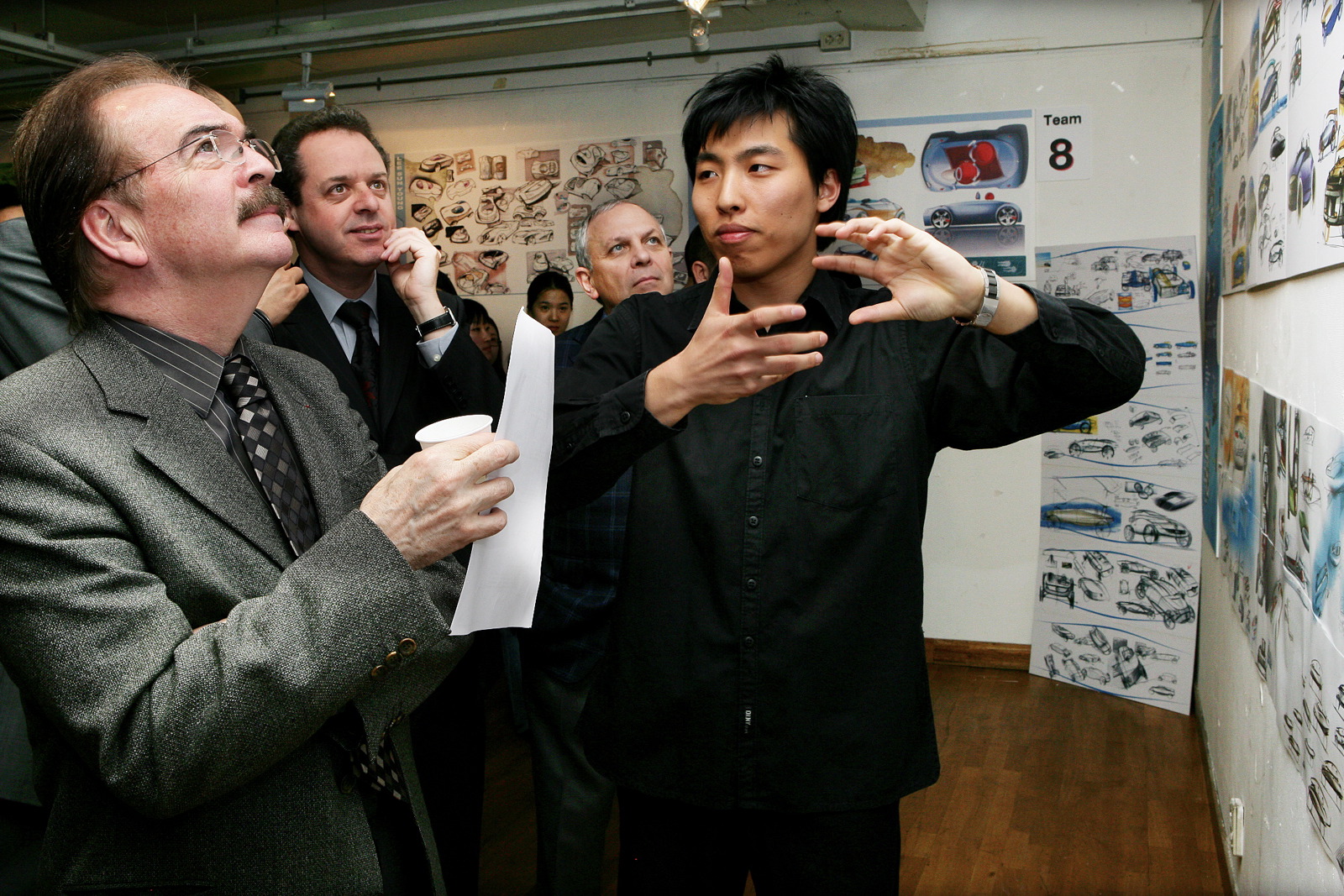 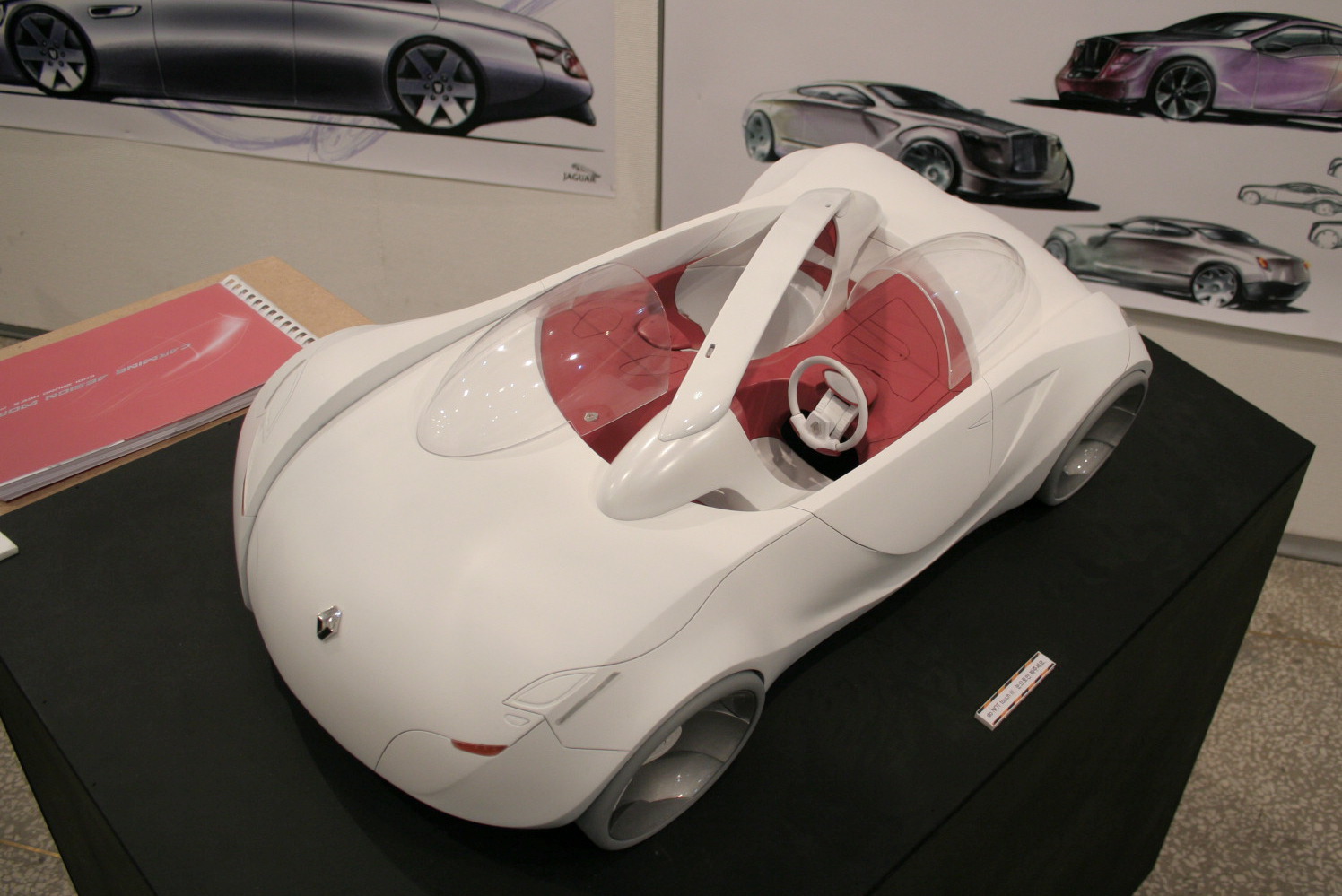 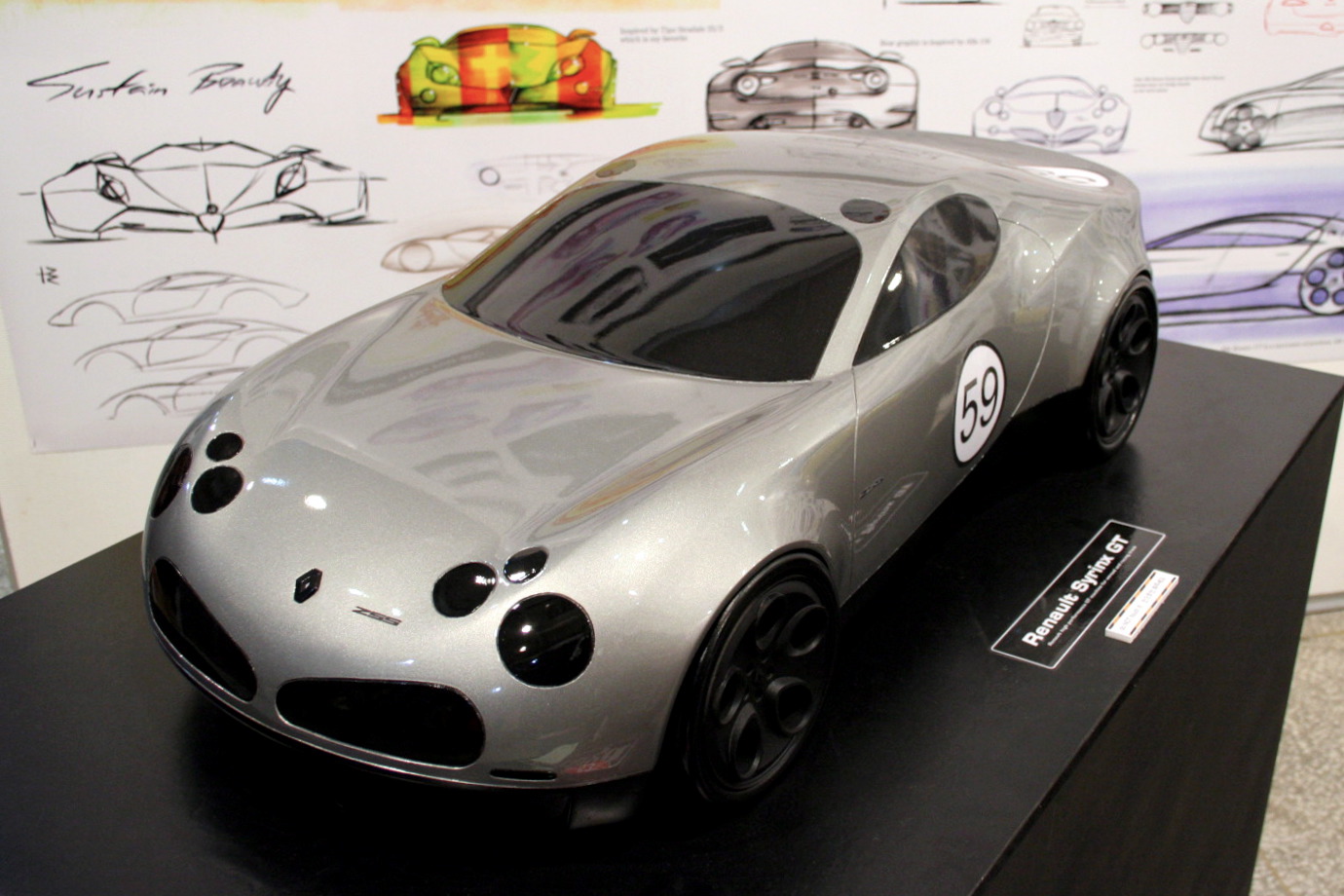 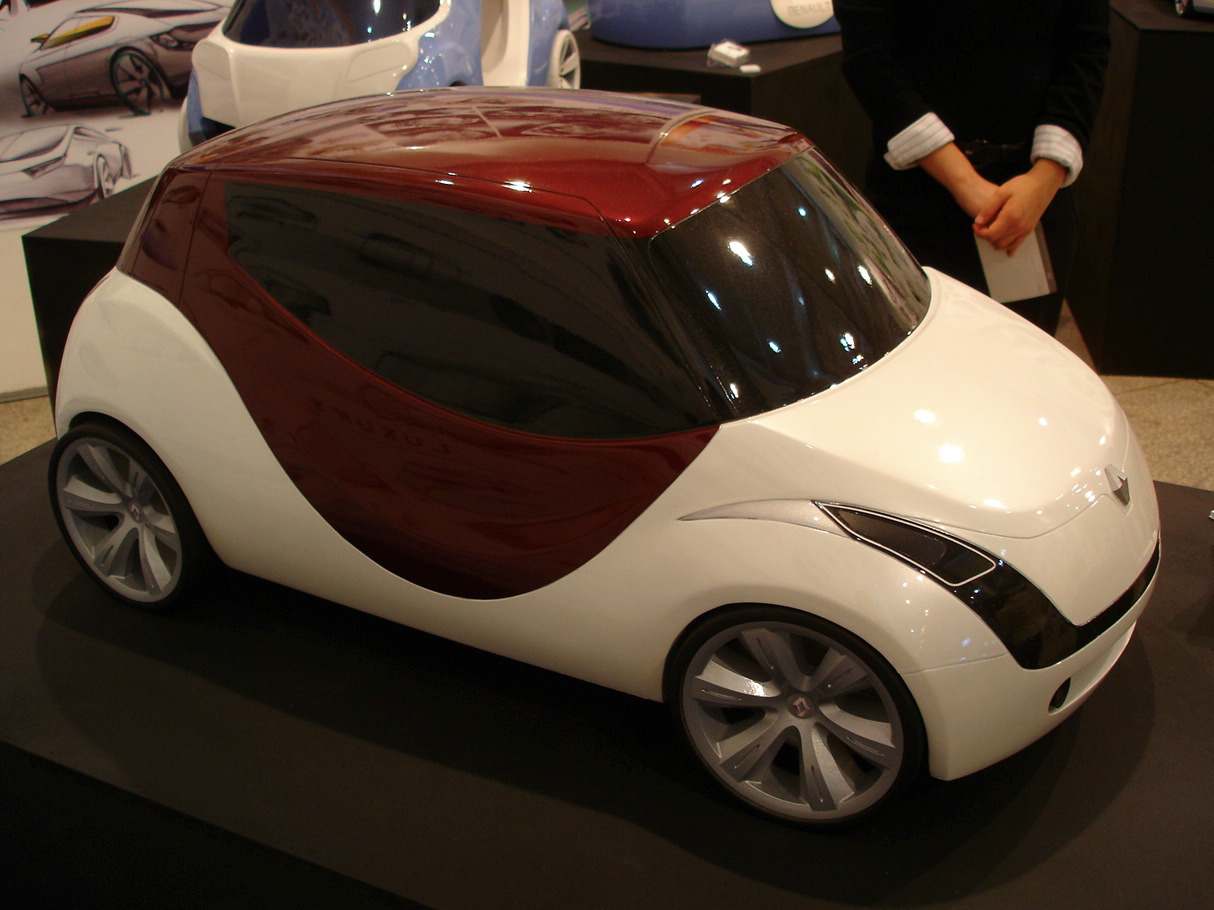 The students were assisted in the project development by Professor Joo-hyun Chung, and two Renault designers every week during the process.

The main purpose of I_eep is to give freshness to the users who inhabit a big city like Seoul. The general concept of the exterior and interior is 'feeling like being under a tree'. For this reason, a motive of entangled branches is used as a structure on the roof. The windshield comprises a large part of the bodywork so that high transparency promotes its openness. Its slightly sporty look and two different colors used on each side expresses lightness and freshness.

The target user of the vehicle is a cohabitated couple. The bi-directional seating position is inspired by the shape of Moebius strip, and of the interactions of man and woman. The exterior shape follows the interior concept, with a face-to-face seating position bringing a bidirectional shape to the car, which ultimately emphasizes the unique style of the car. Multiple colored lamps works differently depending on the side that the car goes. When it goes forward, two lamps works as a head lamp. When the car goes backwards, one lamp disappears into the body, which lets the other one work as a rear lamp.

This is two-seater GT machine in Italian style which will compete with the Alfa Romeo 8C Competizione, Porsche 911 Carrera and Aston Martin AMV8 Vantage in 2007. The overall width of this car is the same as the Ferrari Enzo, while the height is little bit lower than a man's waist. The rear tread is 28 centimeters wider than the front, so the attitude of the car can be spread on the road in very low and sophisticated position similar to many supercars. The ultimate goal of the design was hardcore purity and the beauty which is originated from simplicity.

A three-wheel city car for a working mother who has a small baby and needs to place a baby carriage in the car easily. The tapered rear-end of the car allows better access in busy car parks where ther is little clearance between vehicles. A large dashboard on the right side of the car provides extra safety for the baby, and there is an extra seat under the dashboard. The car follows the form of a water drop in plan view.

With outdoor activates getting more popular, this is a car for people who want to get away from stressful city life and relax through challenges such as water sports. The main keywords for the concept were 'Repose' and 'Expedition'. A couple wearing a swimming suit can enjoy driving on a beach or riverside. They can load a small boat or surf boards in the back of the car as well. Dynamic sportiness was achieved through the streamlined form and geometric Renault design language, with influences from tough-feeling sports gear.

Leisure sports lifestyle is an important part of our whole lives. This concept proposes the car as a sports tool, not just a transportation vehicle. When enjoying outdoor sports, the user can warm up and take a rest inside the car. The center part of the car is made of rubber and is comfortable due to a surface that transforms slowly. On the left side of the car is space for loading equipment such as snow boards and skateboards.

This car is a mini MVP which is specifically designed for young career women who are also a mother of young children. The main characteristic of this car is that the seat which is separated from a baby buggy can be carried in the back seat of the car easily. The motif for the exterior design was achieved from Ban-ga-sa-u sang, a traditional Korean sculpture. Considering the main target users, the young mothers, the overall image is feminine and soft, but the car is also very strong and smart to be safe and convenient for mother and children.

The project focussed on the young generation, people in their twenties. They prefer independent space and time and they want to relax more. According to their characteristics, this is a proposal for a new layout of roadster with a revolutionary seating position. Separate passenger spaces feature rotating seats, where the passengers can enjoy games and communication with friends.