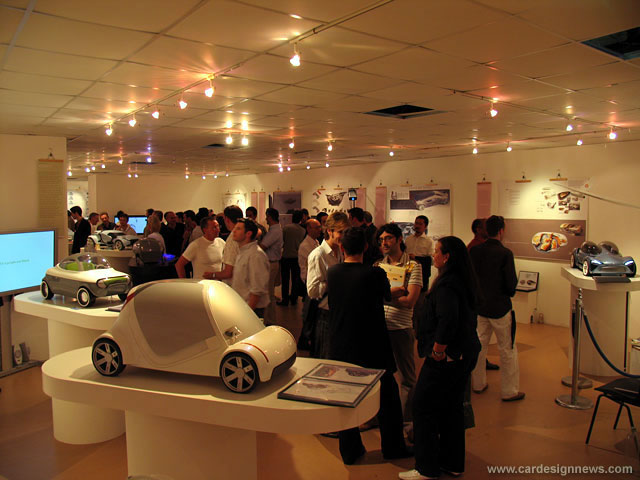 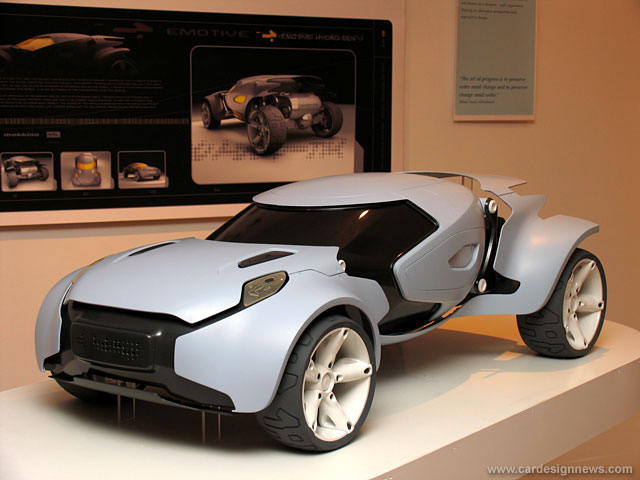 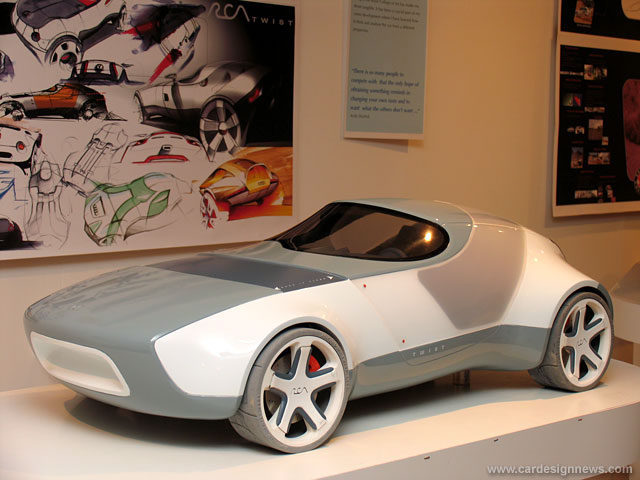 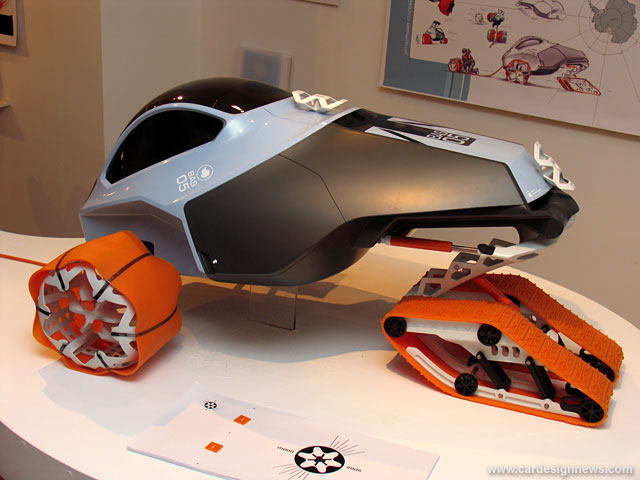 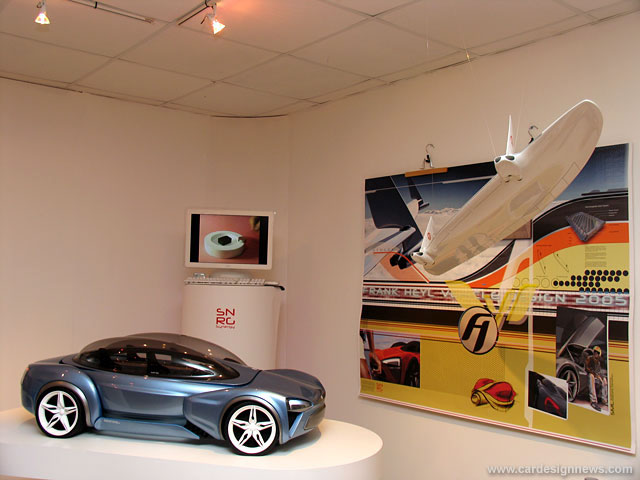 'Synergy' and 'Aeolus' by Frank Heyl 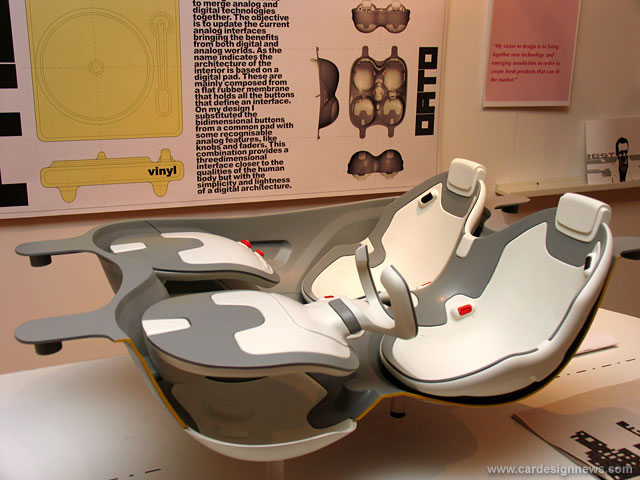 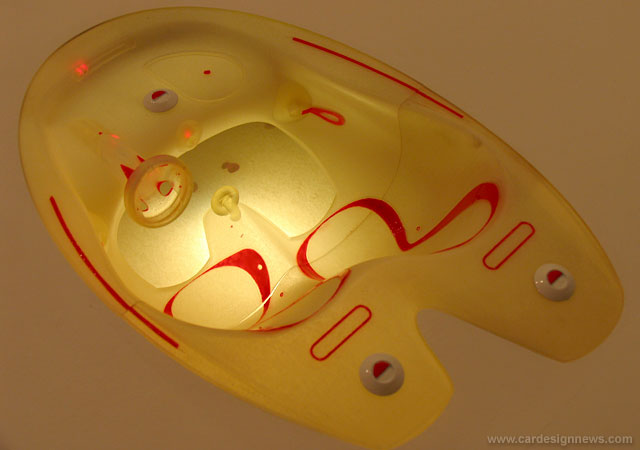 'One Piece' by Ettiene Salome 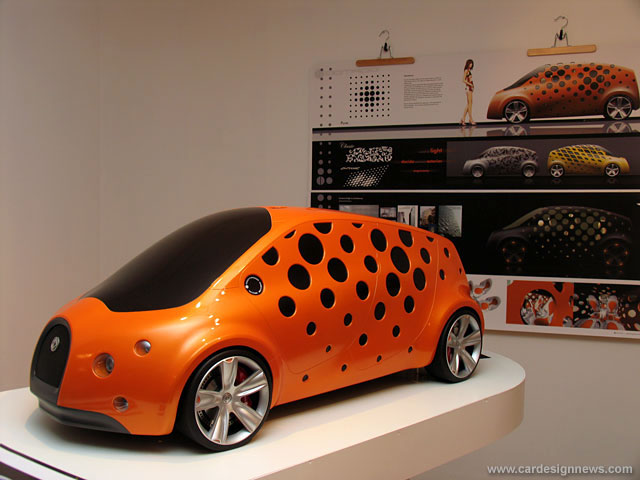 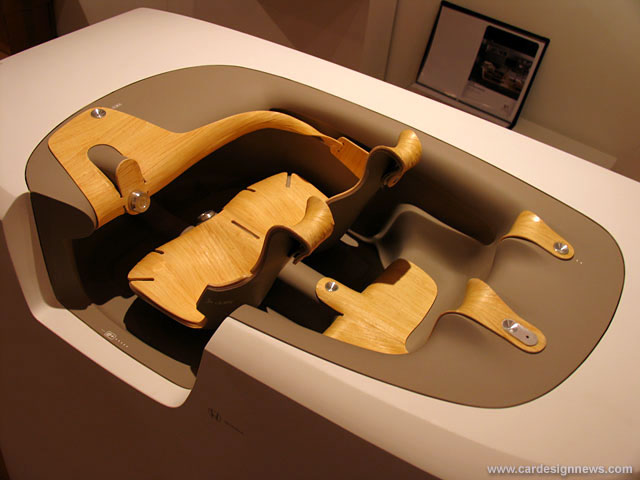 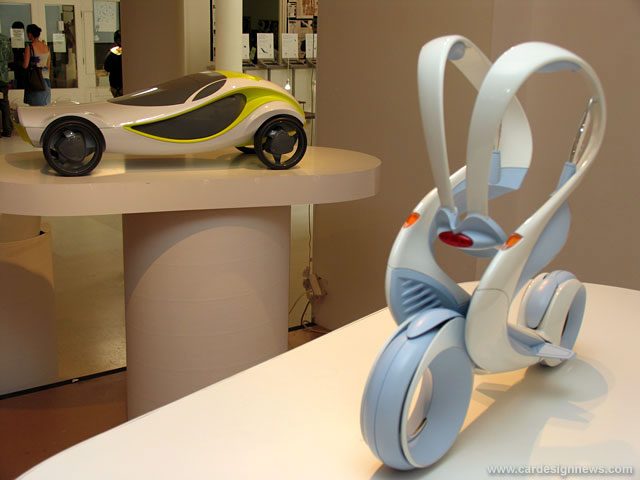 'Getaway' and 'The Button' by Alex J Hung 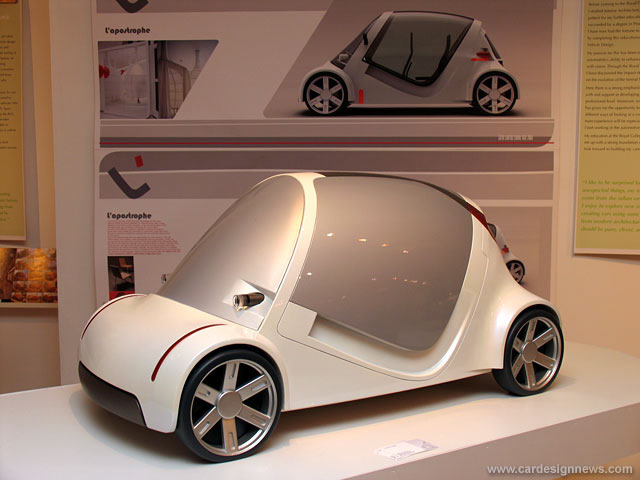 'l'Apostrophe' by Lionel Silva Santos
For the 18th year Pilkington Automotive sponsored the RCA's Vehicle Design Awards. Leslie Lau won the Best Design Interpretation Award for his Emotive-HYDRO:GEN electric vehicle design, a futuristic look at the automobile which retains the spirit of driving passion. Aimed at the single urbanite and powered by a hydrogen fuel cell, the vehicle also seeks to address issues of recyclability through the use of recycled pulp, most commonly found in egg boxes, in the exterior body panels. The design of the vehicle is based on the metaphor of an egg and the eggbox and takes further influence from futuristic elements of Japanese culture and their visions of the future city.

This year's judging panel included Simon Cox from GM, Lance Scott from Toyota and Ken Melville from Renault. Ken Melville explained what made the HYDRO:GEN a winning design: ?Leslie produced an exciting design around the interesting concept of an egg and eggbox - using both the protective and recyclable qualities in his design; it was a beautifully finished model.?

Julio Lozano Benlloch won the award for the most innovative use of glazing for his RCA Twist design.The Twist is a vehicle designed to meet the changing needs of people's lifestyles - a sporty two-seater during the week, changing to a four-seater family car at the weekend. The windscreen, IP, and drivers seats slide forward to reveal rear seating, at the same time altering the character of the car in profile to suit each mode. Simon Cox explained the judges' reasons for choosing RCA Twist: "Julio has cleverly used glazing to enhance his design with an inverse curved windshield and asymmetric shape. He also used translucent areas of glass to create a very simple but modern design with a strong graphic identity".

There were four commendations in the Best Design Interpretation category, to Alex J Hung for his Button scooter, James Moon for his Antarctic vehicle, Frank Heyl for a supersonic airliner and Paul Denton for his Helping H.A.N.D vehicle to de-stigmatise disability.

James Moon presented 'Ninety Degrees South', a vehicle designed to meet the specific requirements, logistical challenges and harsh conditions of the Antarctic environment. Light weight and partial disassembly allows it to be airlifted in Twin Otter aircraft, for use on the Antarctic plateau, a requirement previously satisfied only by snowmobiles. By using a combination of tracks and wheels the vehicle can travel over more varied terrain than other snow-specific vehicles. Intended for scientific use and private expeditions, Ninety Degrees South has a remote pathfinder vehicle for crevasse detection. In the spirit of the Antarctic Treaty, the vehicle is both minimal environmental impact transport, and a scientific tool.

Frank Heyl's project 'Aeolus' is a second-generation supersonic airliner with an Oblique Flying Wing configuration that enables it to sweep the entire wing to reduce drag to one tenth of that of a delta wing. The interchangeable cabins will improve the turnaround time: While the arriving cabins are being unloaded from the aircraft the departing ones are already waiting, fully boarded. From the reduced flight time through optimised turnaround and 'supersonic over dry land capabilities' to the savings in fuel and operation cost Aeolus represents a true revolution in civil aviation. Heyl's second project 'Synergy' utilizes the extreme temperatures in its hydrogen fuel tank to suspend the cabin through superconducting magnetic levitation. A natural banking effect is achieved due to the forces in curves, resulting in an entirely passive suspension and handling system improving on both comfort and ride dynamics.

Oriol Mogas Bartomeu presented 'Analog Pad', an interior concept intended to demonstrate the merging of analog and digital technologies, bringing the benefits from both approaches. As the name indicates the architecture and form language of the interior is based on a digital keypad. These are generally composed from a flat rubber membrane that holds all the buttons that define an interface. Oriol has substituted the bidimensional buttons from a common pad with some recognisable analog features, like knobs and faders. This combination provides a three-dimensional interface closer to the qualities of the human body but with the simplicity and lightness of a digital architecture.
Page 1 of 2/site/process/college_exhibitions/display|