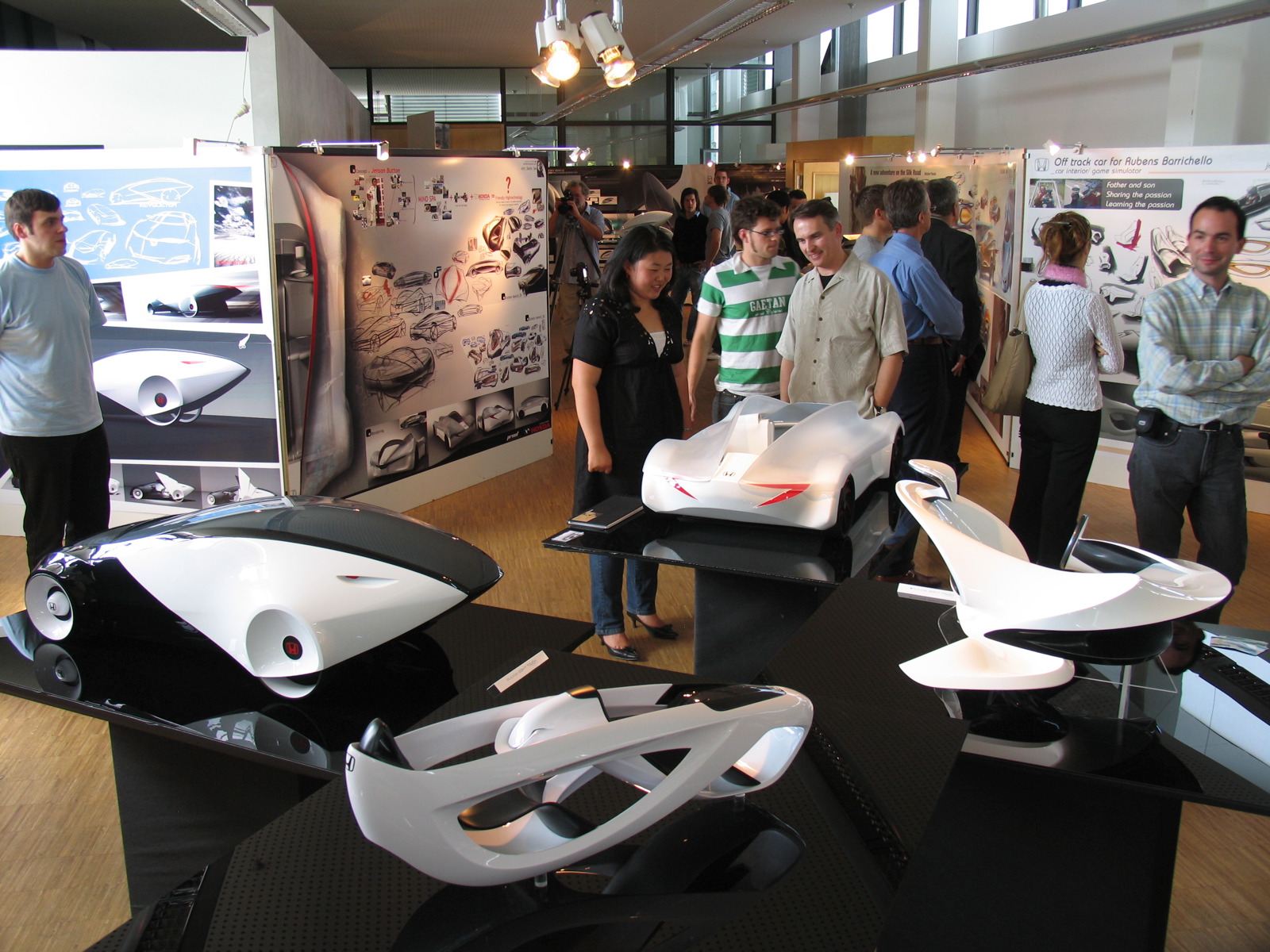 Presentation of the Honda project 'A road car for Jenson Button and Rubens Barrichello' by 1st and 2nd semester Masters students. Click for larger images 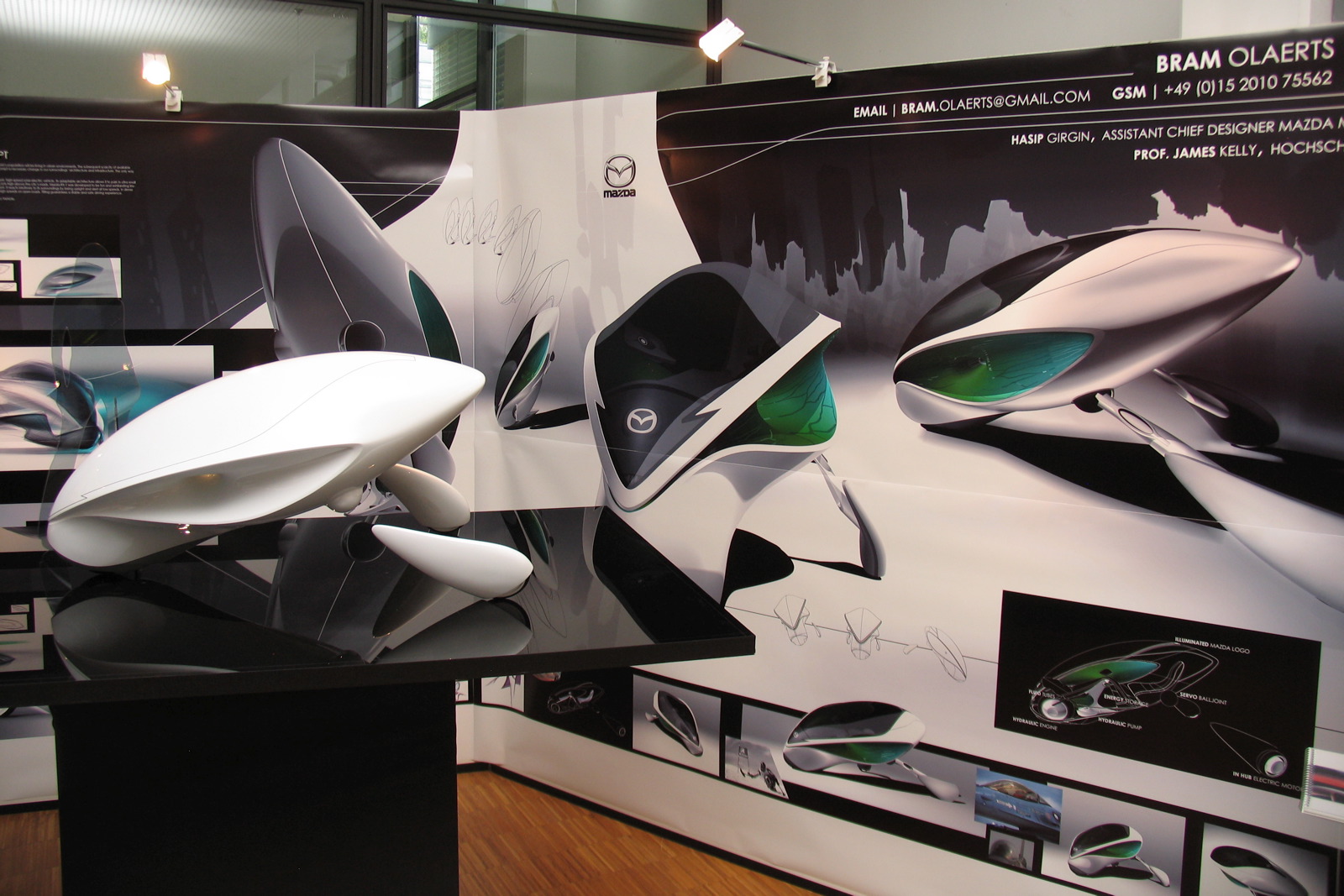 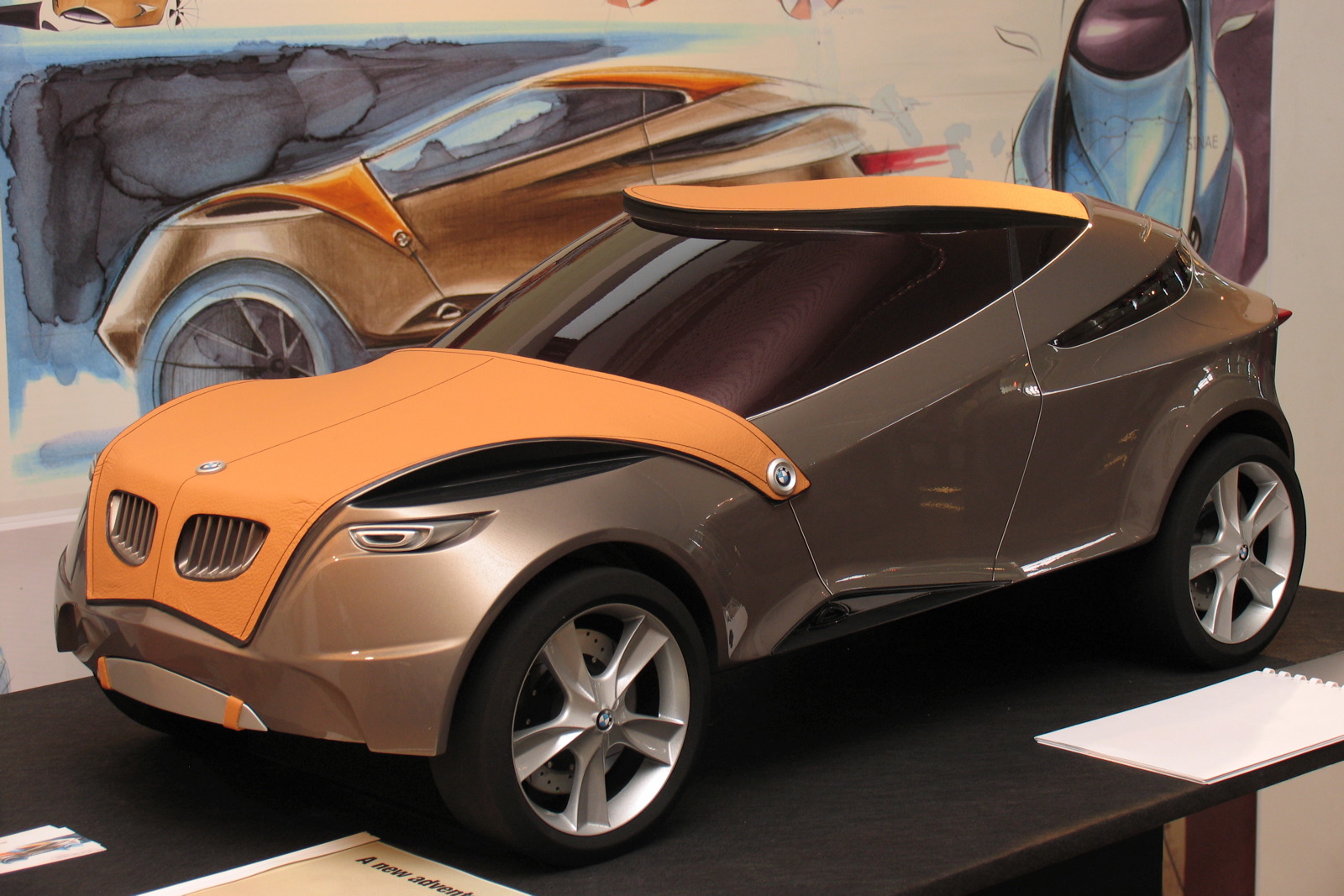 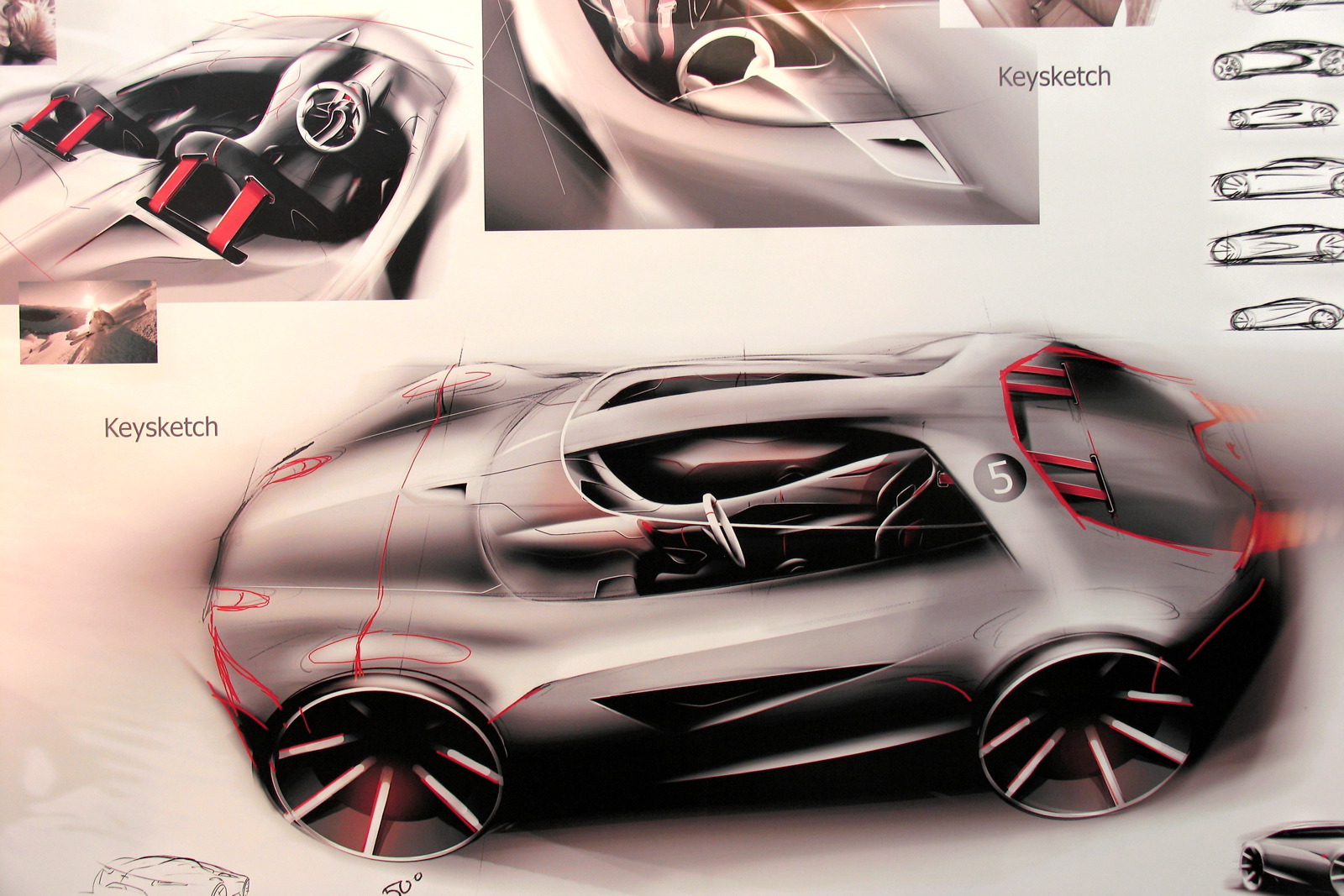 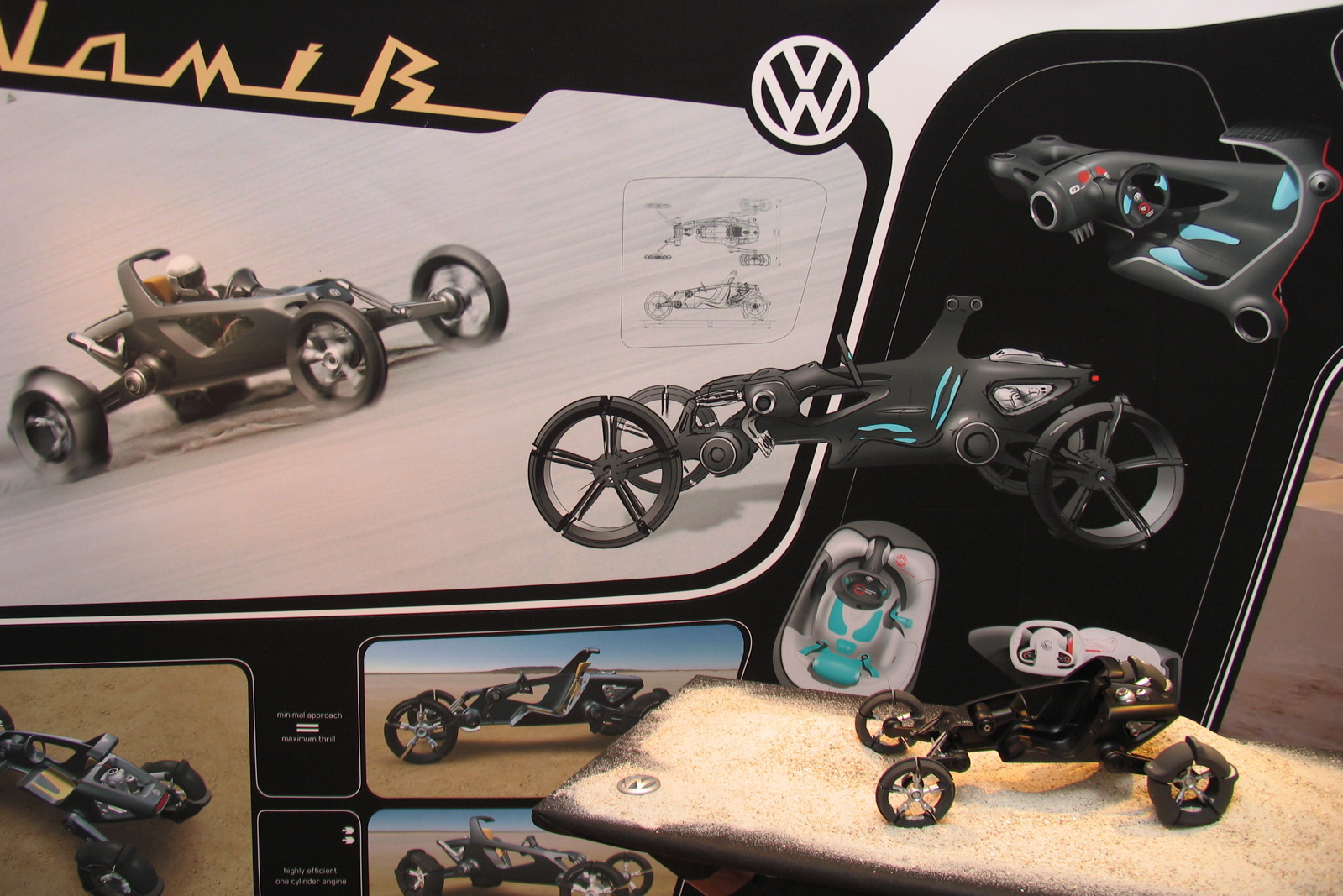 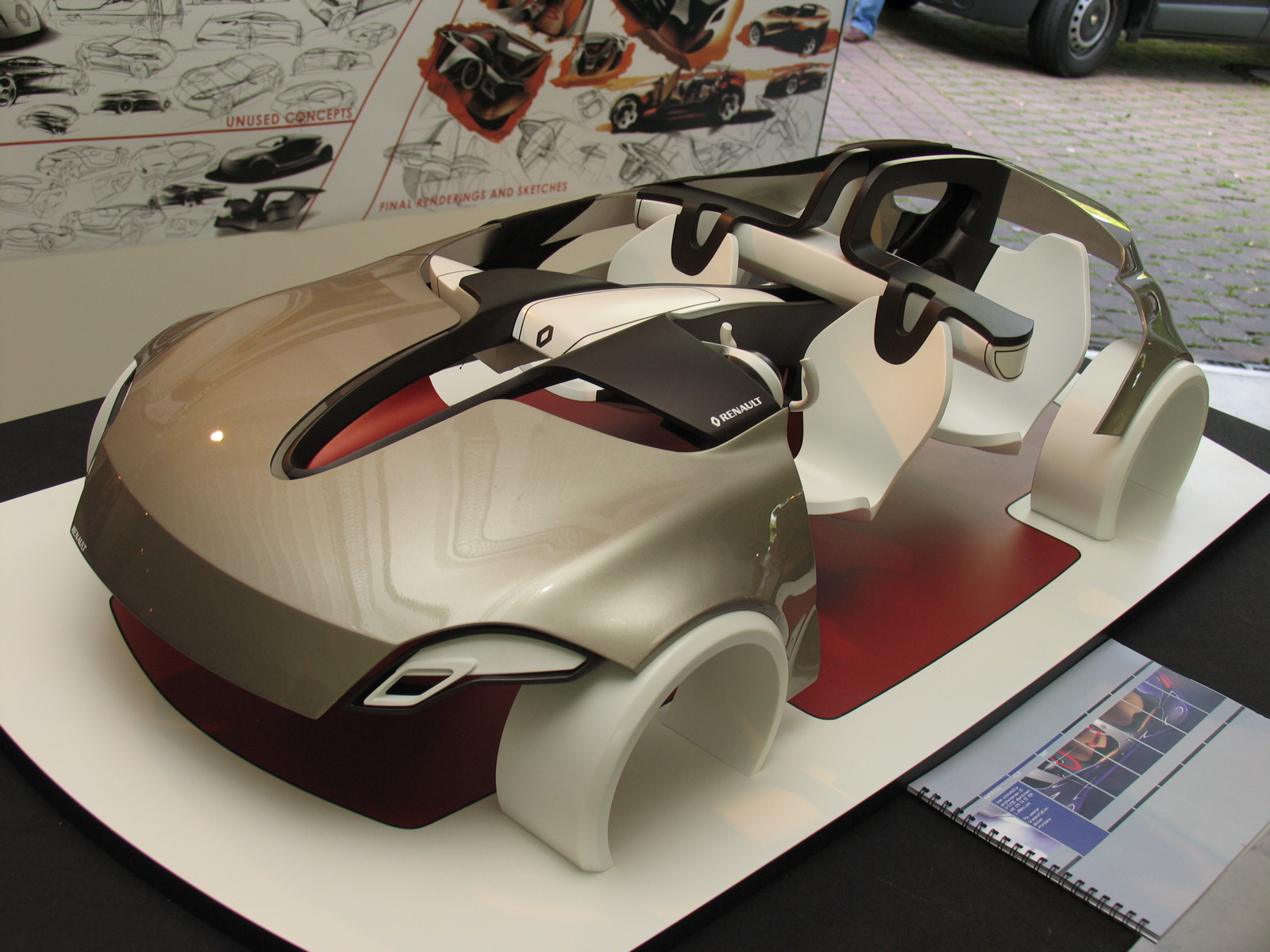 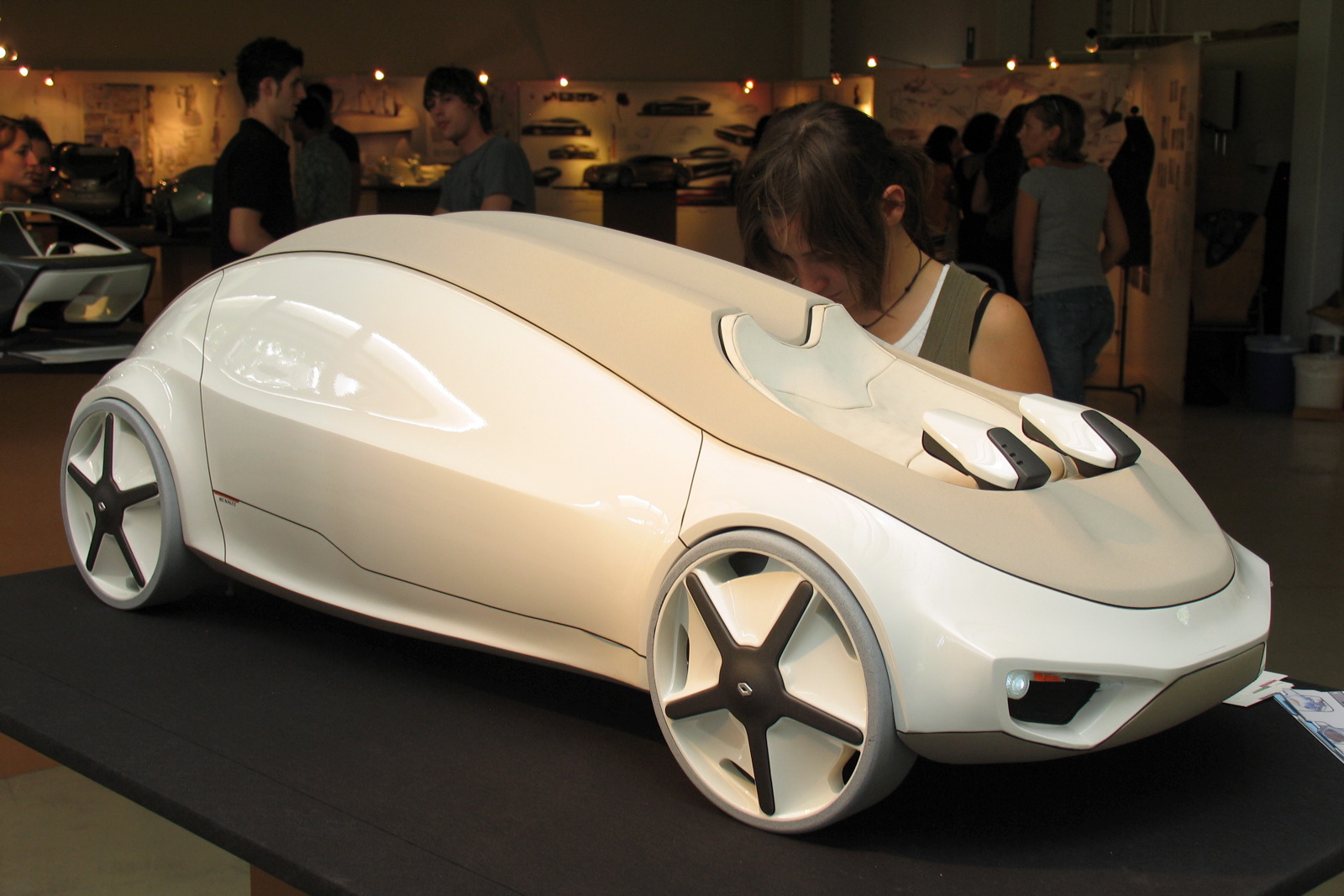 Following the success of this project in previous years by 5th and 7th semester students, the project was redefined this year, with students from the first and second semester of the Masters program creating 'a road car for Jenson Button and Rubens Barrichello'. The proposals were presented as digital model renderings and animations, while four were shown as physical models created from digital data using rapid-prototyping techniques. The models were presented at the German Grand Prix at the Nuerburgring on July 19. Selected projects will also be exhibited at the Frankfurt Motor Show in September. 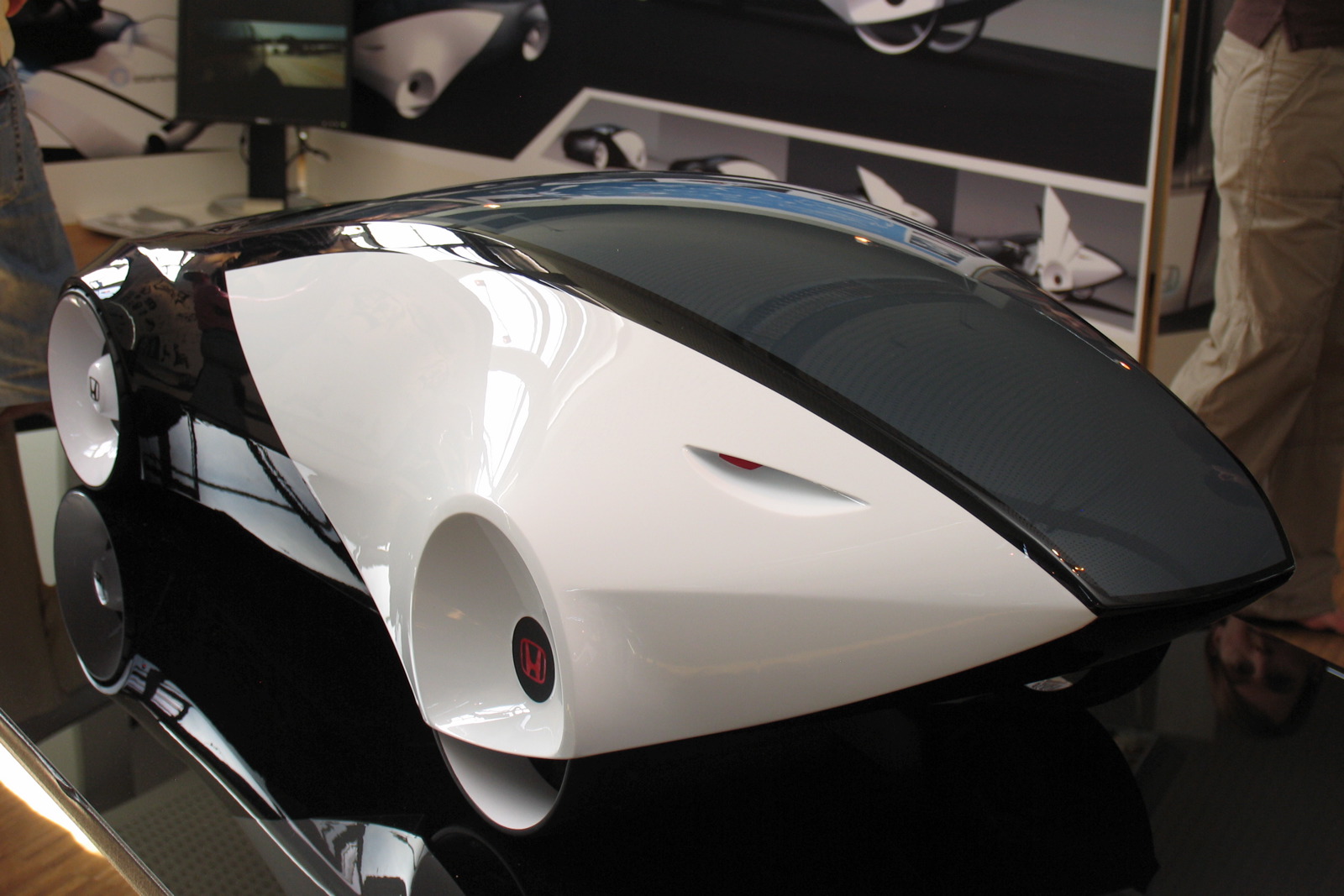 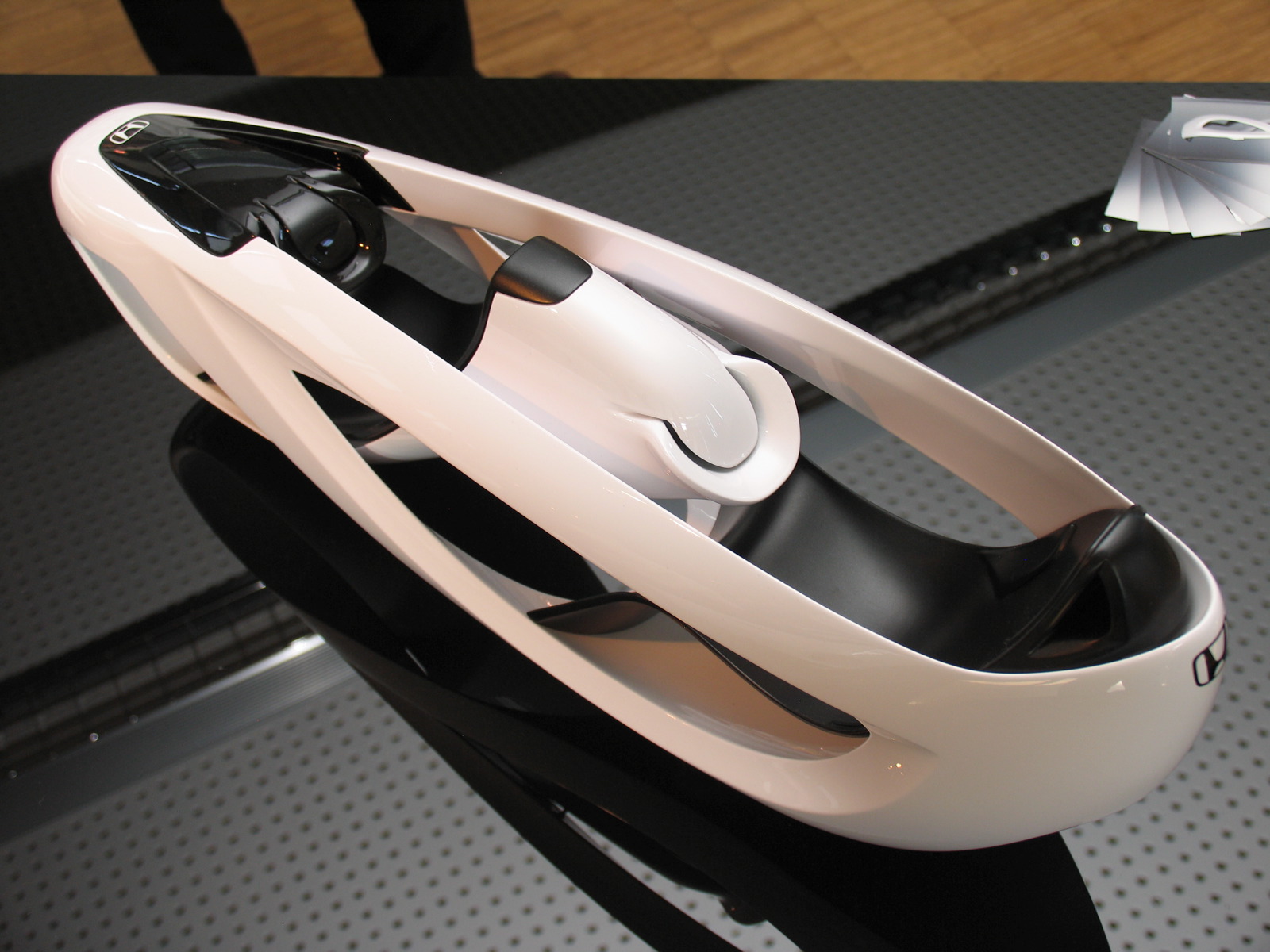 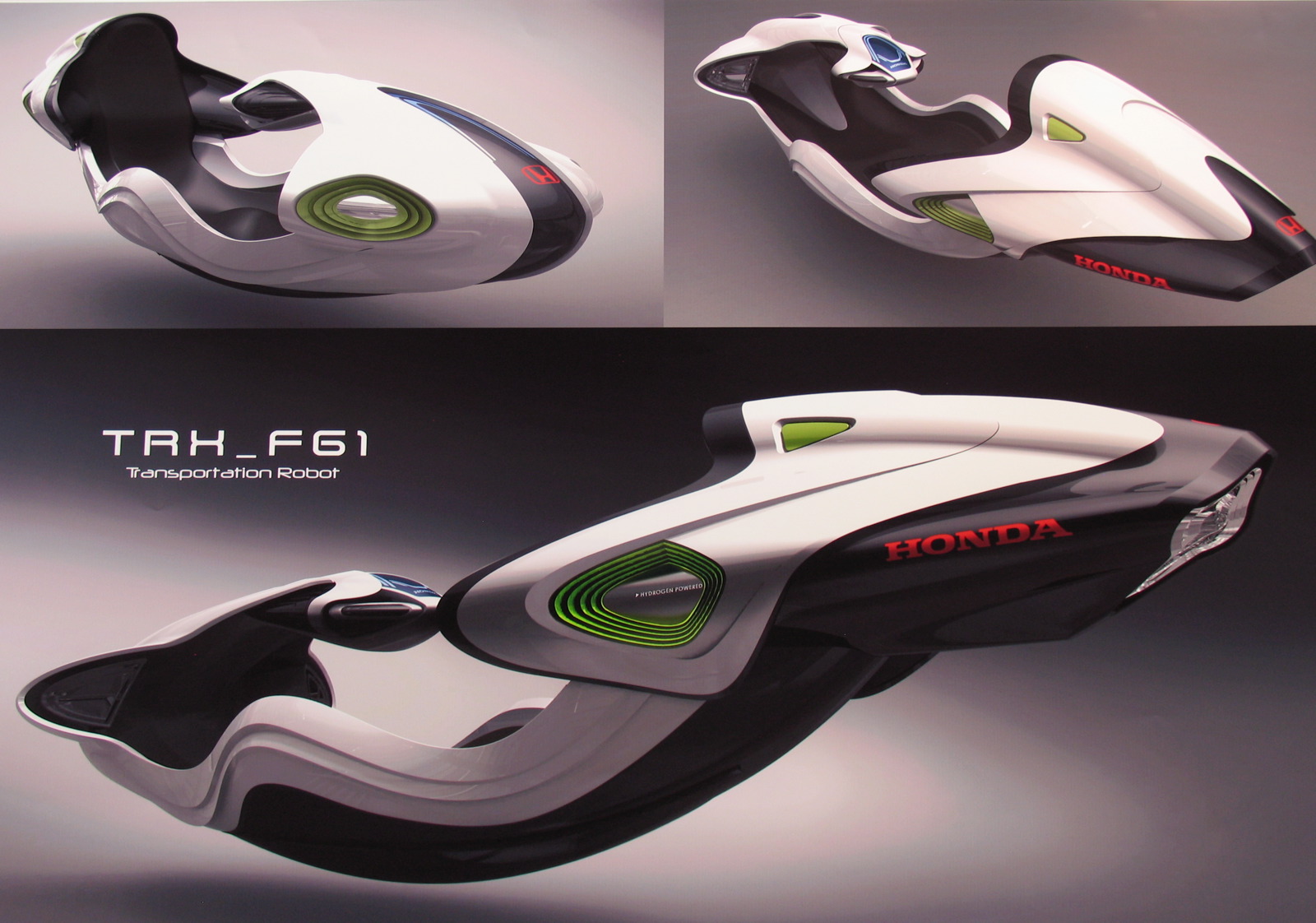 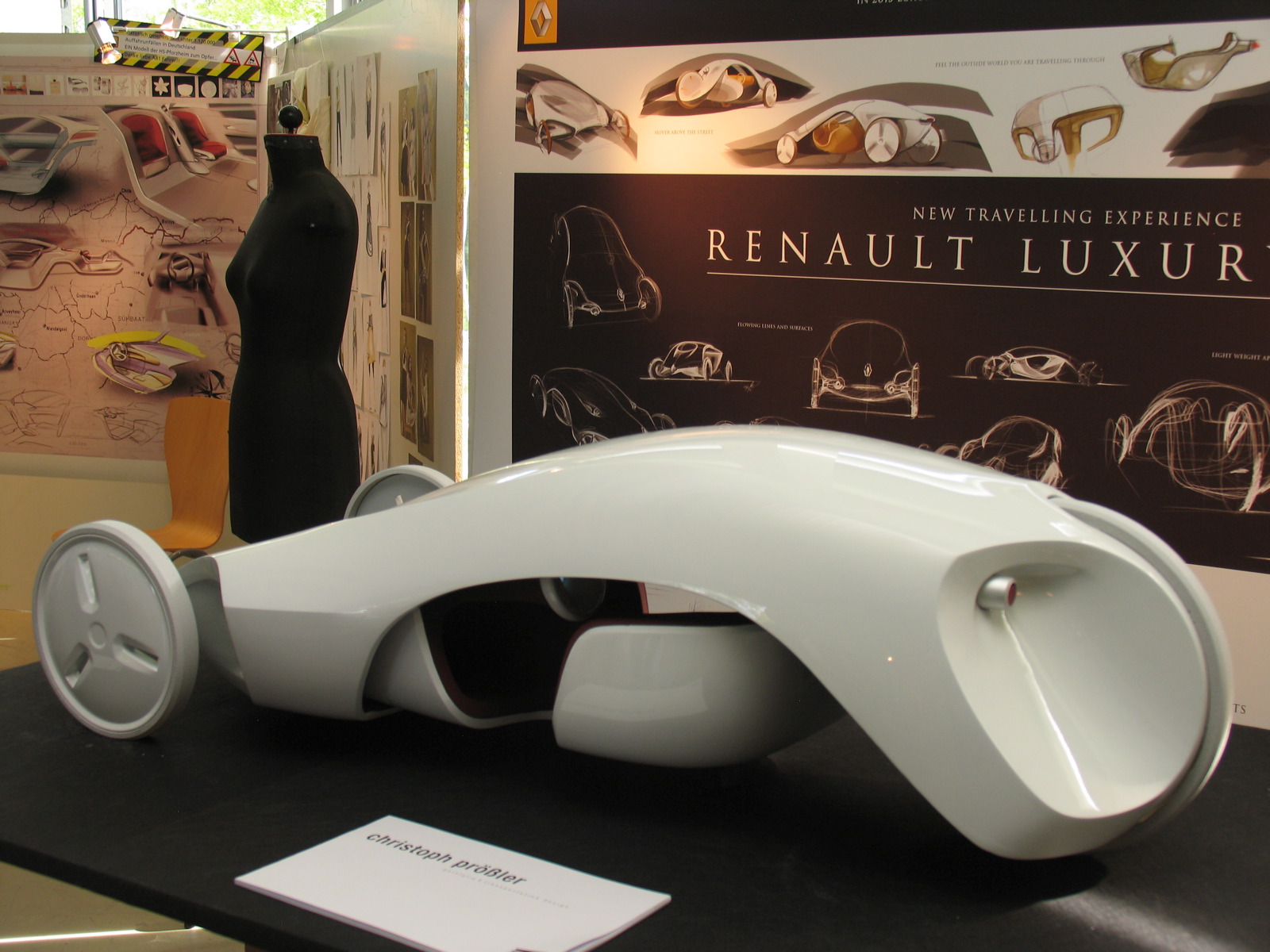 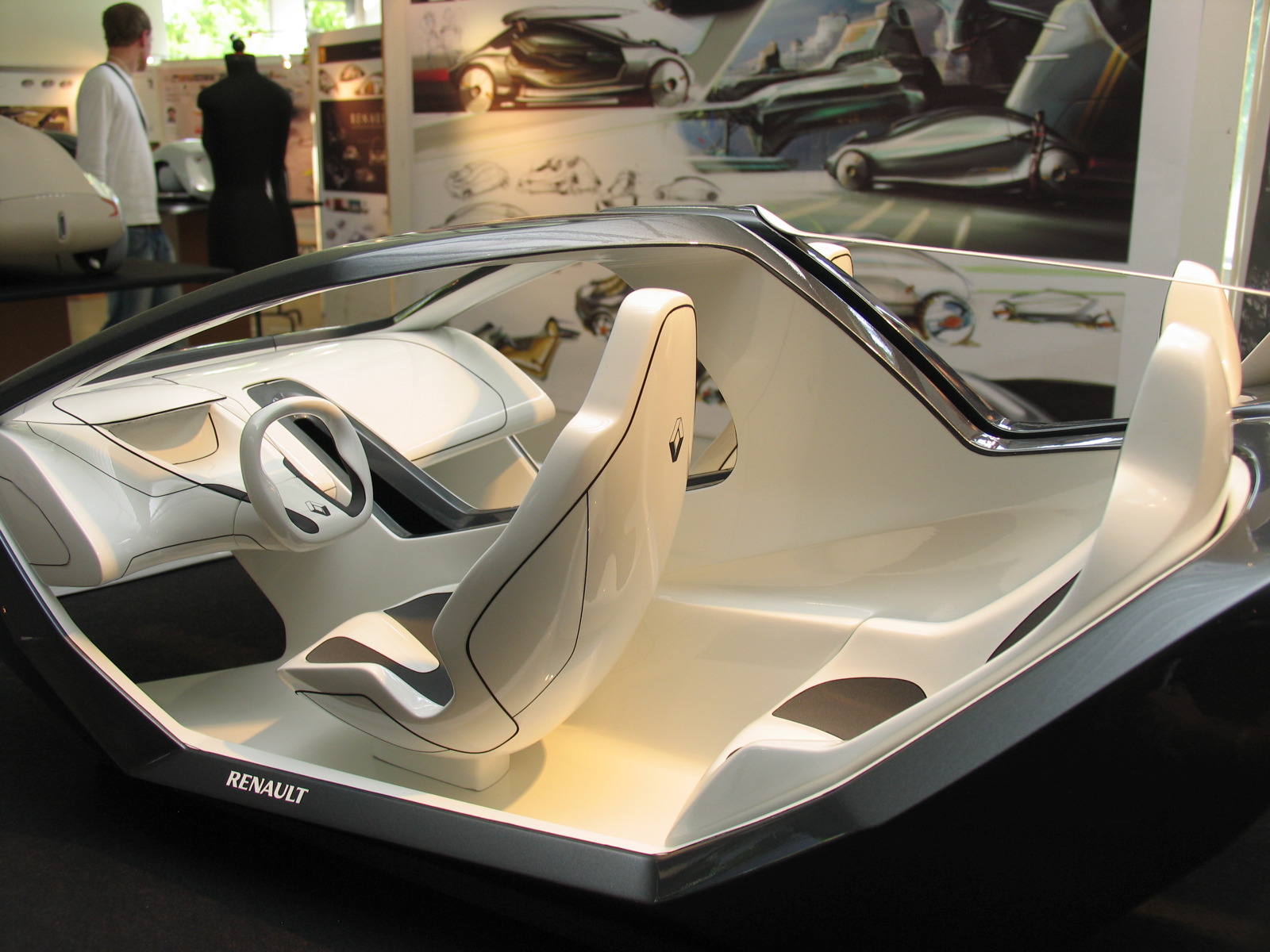 With increasing numbers of the world's population living in urban environments, the scarcity of land in mega cities will prompt a necessary change in architecture and infrastructure - the only way forward will be up. Mazda RX-1 is a closed single-seat, high-speed solar-electric vehicle. Its adaptable architecture allows it to park in ultra-small spaces or in suspended parking lots high above city roads. It was developed to be fun and exhilarating irrespective of its driving environment, reacting intuitively to its surroundings. Upright at low-speeds and in dense traffic giving the driver a birds eye view of the road, it transforms to become ground hugging at high speeds on open stretches. Tilting guarantees a stable and safe driving experience.

inspired by sidecars and asymmetry, this project is aimed at the next generation of Jaguar drivers. The goal for the project was to create a Jaguar that young people would desire. Jaguar tried this with the X-Type but while it may have sold well, it is still generally the older customers who are buying them. This asymmetric, 'entry-level' two seater Jaguar aims to be exclusive, desirable for young people, and true to Jaguar's design philosophy.

SR is a vehicle to be used on the Silk Road, which connects Chinese culture and European culture. Inspiration was taken not only from the Silk Road civilization which was always flowing, changeable, and erratic, but also from the new lifestyle in this region such as camping or outdoor sports. The most expressive element in the design is the use of leather material on the roof and the hood, arousing memories of horseback travel as in Marco Polo's time. The vehicle combines coupe and SUV to meet the needs of different users, whether they are in cities, deserts, grasslands, or mountains.

A large part of the Pforzheim exhibition is made up of industry-sponsored projects from earlier semesters:

4th, 5th and 7th semester students presented exterior and interior proposals for an upper-segment Renault for the year 2015. The project was made in cooperation with Pforzheim University Fashion Design students, who developed collections aimed at the same target group as the vehicle. The point of this collaboration was to explore the similarity in the function of a car, and of fashion, as a deliberate expression and extension of a person's self-image.

4th semester students developed a two-seater roadster, inspired by the Lotus Super Seven. The starting point for the project was an existing research vehicle with electric drivetrain. The project required the students to work with the dual themes of highly emotional sports car and an ecology-friendly drivetrain.

The Pforzheim Transportation Design Department is located on the outskirts of the town of Pforzheim, Germany, between Stuttgart and Karlsruhe. The school has a newly introduced BA course, and a Master of Transportation Design program. A diploma or degree in Industrial design is required for acceptance on the Masters course.