May 6, 2002 – Imagine cars of the future that will soothe road rage with a calming lilac scent, embrace occupants in a single monolithic air bag when needed and roll off assembly lines with infinitely variable seating, electronic and even body configurations.

Ideas like these already grace the drawing boards and design studios at one of the world's top design schools, the College for Creative Studies in Detroit. Staff from the Ford Motor Company Design Center in Dearborn have been working closely with the CCS Transportation Design students since January, and the results of that collaboration will be shown at the annual Student Exhibition, which opens May 10.

With one of the world's leading automotive design programs, CCS draws students from around the globe. For example, Angela Ware, 22, grew up in suburban Farmington Hills, Michigan, while classmate In Yeok Chung, 30, is a law-school graduate and army veteran from Pusan, Korea.

Like most of his CCS classmates, Alikhan Kuljanov, 28, grew up drawing cars. But in his native Tashkent, Uzbekistan, they were the Soviet-mainstay Lada, the commissars’ upscale Volga, “the occasional Fiat” and his introduction to American culture, robot Transformers.

They’re among two dozen graduating seniors to complete thesis projects under the close tutelage of CCS graduate Jim Smithbauer and other Ford designers, who have spent six hours each Thursday afternoon since January advising and guiding the CCS design students. “In addition to the close contact with the Ford staff, this project has provided our students with an important introduction to the corporate culture and how designs are developed in the real world,” said Bryon Fitzpatrick, the CCS chairman of Industrial Design.

The interaction with students is refreshing to Ford participants like Smithbauer, 31, the design manager for the next generation of Ford’s F-Series pickup truck. “The student's creativity is unconstrained by ‘fease’ disease,” says Smithbauer. “That’s the creative block among veteran designers who may find their imagination stifled by feasibility issues like costs, technology or regulations.”

Free from such contraints, the CCS seniors were encouraged by Smithbauer and Fitzpatrick to push the design envelope on their project vehicles. The requirements for the Ford-sponsored project: start with the 'brand DNA' of Ford, Lincoln, Volvo, Jaguar or any other Ford Motor Company line; then design a full interior on computer, with actual material samples; and finally incorporate into their design sketches and exterior clay scale models the flexibility to alter the vehicle’s character by changing up to 25 percent of the exterior sheet metal.

“We had them start with interiors because we’re placing more emphasis on our interiors at Ford,” explains Smithbauer. “Many of today’s vehicles have a certain similarity, so we see interiors as a competitive advantage, an area where we can really stand out. Plus, that’s where our customers interact most with the product, so we see design of the interior components – the steering wheel, entertainment and instrumentation, seats, gear shift and door panels – as increasingly important.

“From an interior design standpoint, that means closer attention to the aesthetics, ergonomics, materials and textures of each item individually and in relation to the interior as a whole.”

The vehicles designed by the CCS students are decidedly futuristic, including one with at least a passing resemblance to George Jetson’s space coupe. Most interiors feature configurable seating arrangements, including one with all four seats supported from a full-length center console. Another, a Ford rally coupe, positions four seats in a diamond array, with the driver alone in front, flanked by two second-row seats, and a single rear-facing 'tail gunner' seat.

Personalized interior touches include the planters in Hong Yeo’s Lincoln luxury coupe and the aroma therapy feature on Ware’s variation of Ford’s Th!nk brand neighborhood electric vehicle. “Aroma therapy is so popular now for its healing, calming effects, so why not make it available in cars, where people spend more and more of the time?”, she says.

Design flexibility is increasingly important because of a growing customer demand for both niche vehicles or mainstream products easily tailored to their individual lifestyles. “It’s no longer one-size-fits, all and we’ve already started moving that way with the current F-Series,” Smithbauer notes. “From the basic XL, which is oriented to contractors and workmen, you can move up to the XLT, which is more family-oriented, and the King Ranch for the guy who wants ultraluxury. And we modify things again on the Harley and SVT versions for customers who want a pickup with more personality, performance and sports-car feel.”

The students at CCS understand the concept. Brian Izard’s Mercury crossover vehicle is a two-seat coupe with a large cargo area that can also be built as a 2+2 variant with a rumble seat. Kuljanov’s 'Sagdiana,' named for an ancient city of central Asia, is a Volvo-based eight-passenger wagon that can also be modified for military use. Kyle Evans offers three versions of his update of the P1800, Volvo’s Italian-styled two-seater Sixties classic. Change two body panels and the luxury touring car can be built as a pickup or sport utility vehicle. 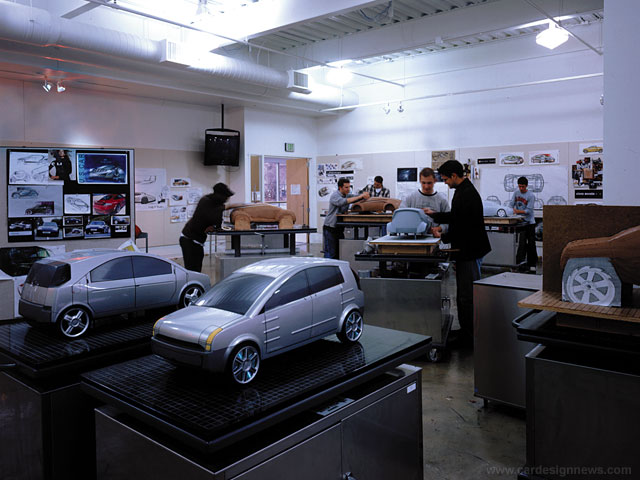 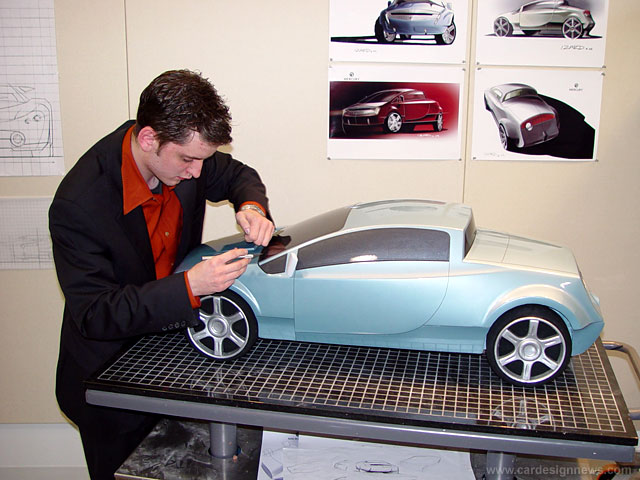 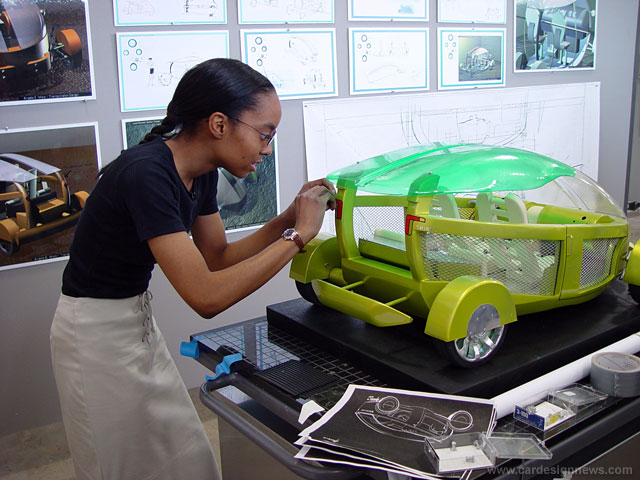 Angela Ware puts the finishing touches on her senior thesis project, an upscale version of the Th!nk. 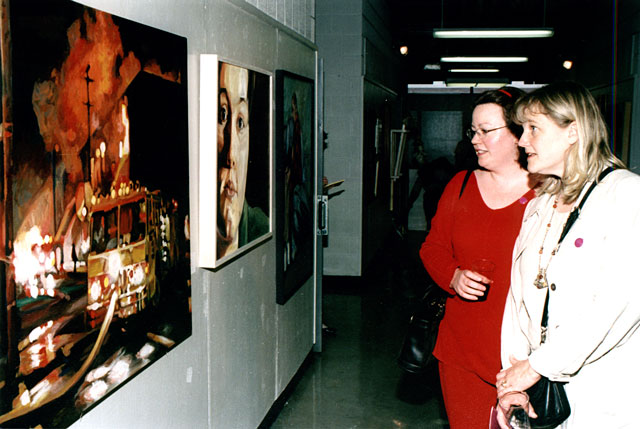 The Student Exhibition includes work from all of the schools courses

The culmination of the academic year at the College for Creative Studies, the Student Exhibition dates back 76 years to shows held at the Detroit Society of Arts and Crafts, the precursor to CCS.

From its modest beginnings, the CCS Student Exhibition has continually grown in reputation and in importance to the metropolitan Detroit community. Last year, more than 2,000 people attended the opening and the two-week exhibition that followed. The show draws recruiters from automotive manufacturers and design companies worldwide.

During the exhibition, the entire CCS campus is transformed into a gallery displaying more than 2,500 works of art by students from the College's departments of Animation and Digital Media, Communication Design, Crafts, Fine Arts, Foundation, Illustration, Industrial Design, Interior Design and Photography.

The Student Exhibition Opening provides art lovers with the first opportunity to view and purchase student work from the show, and most sales occur on opening night. The evening consists of a Patrons' Preview, 5-6:00 p.m. (tickets are $200 each) and a Public Preview, 6-9:00 p.m. (tickets are $40 in advance; $50 the day of the event).

After opening night, the exhibition is open to the public free of charge during the hours of 10 am to 4pm on weekdays and noon to 5 pm on weekends. Students receive 100 percent of the proceeds from the sale of their work.

This year's Student Exhibition Opening will take place on Friday, May 10.