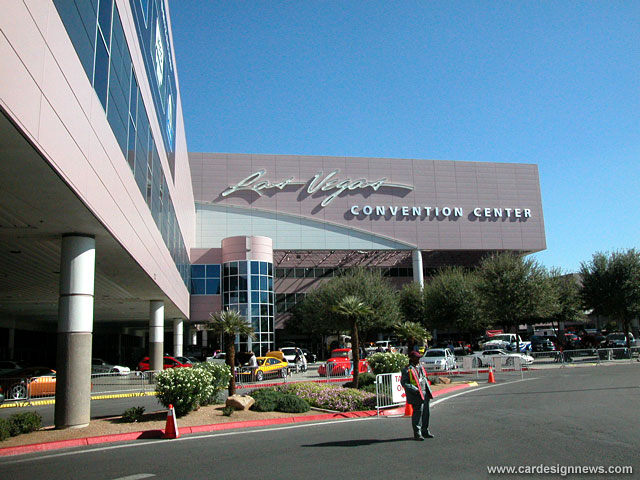 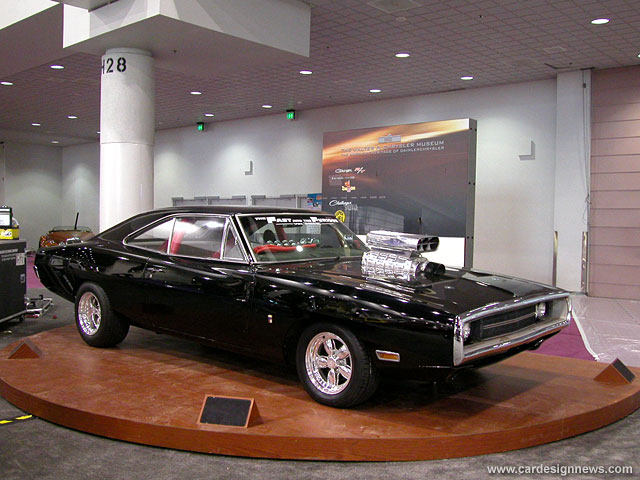 Dodge Charger from the film 'The Fast and the Furious' 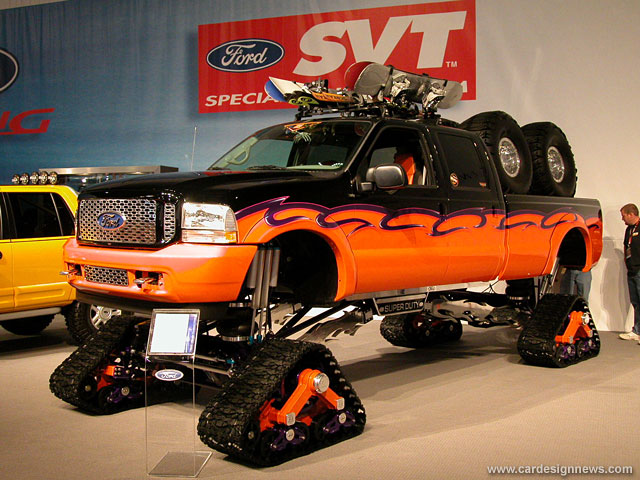 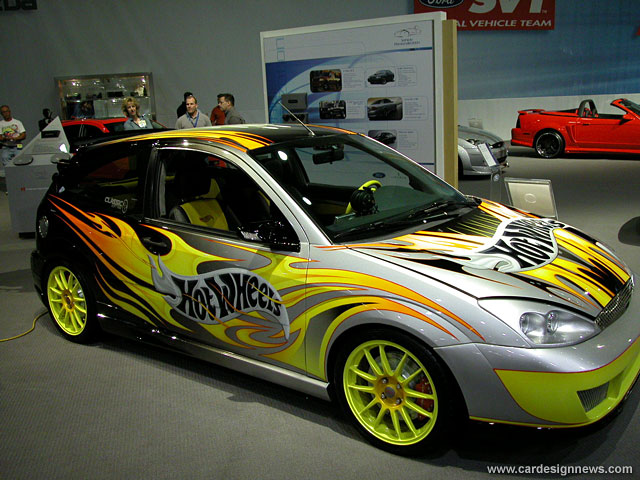 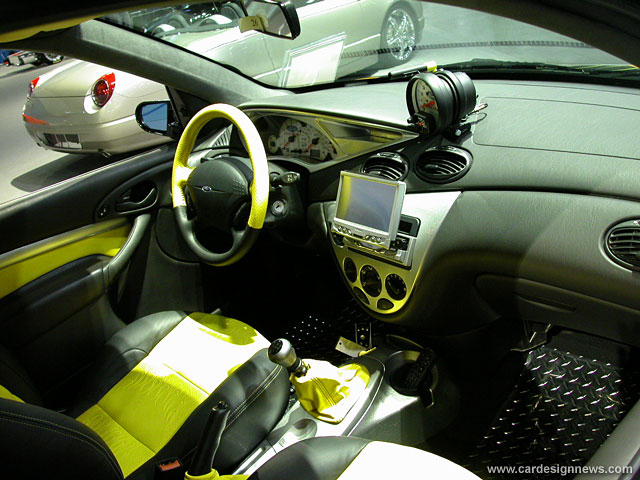 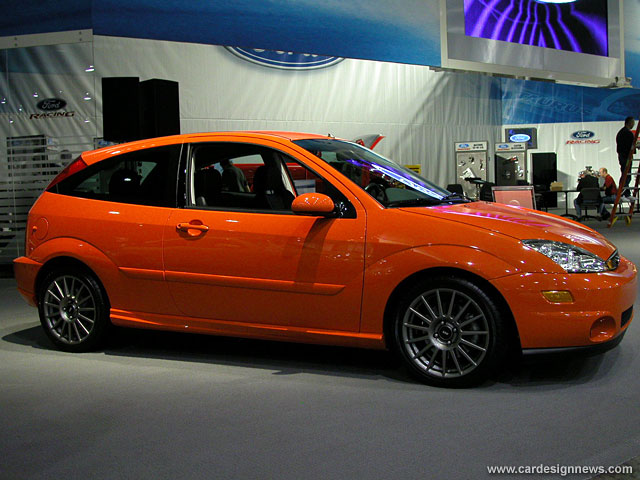 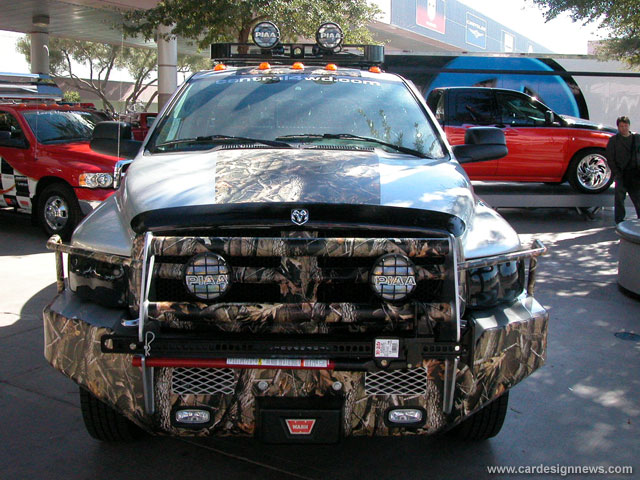 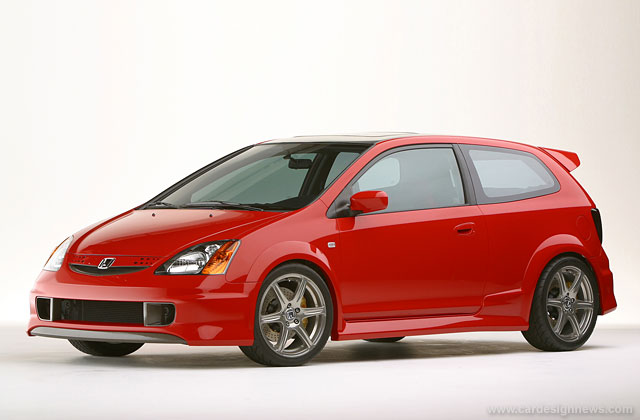 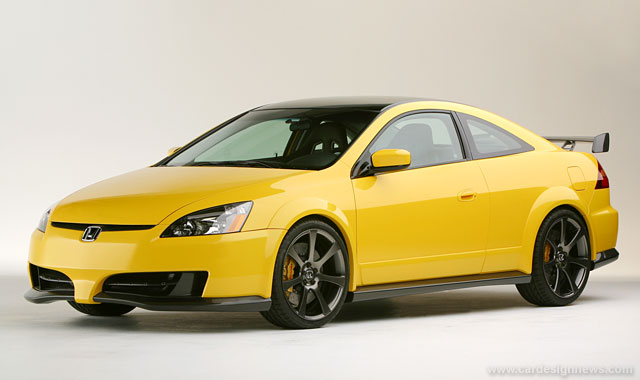 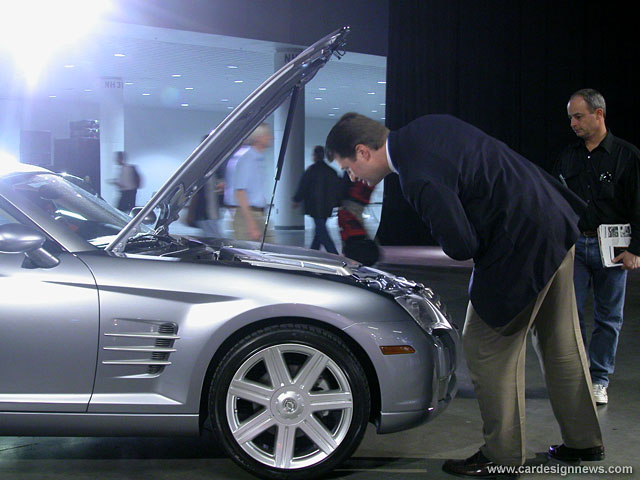 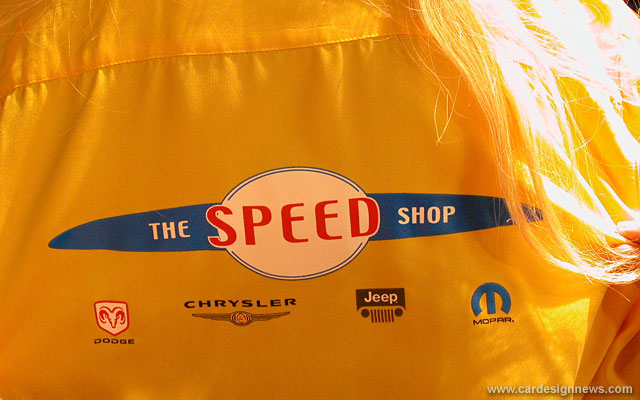 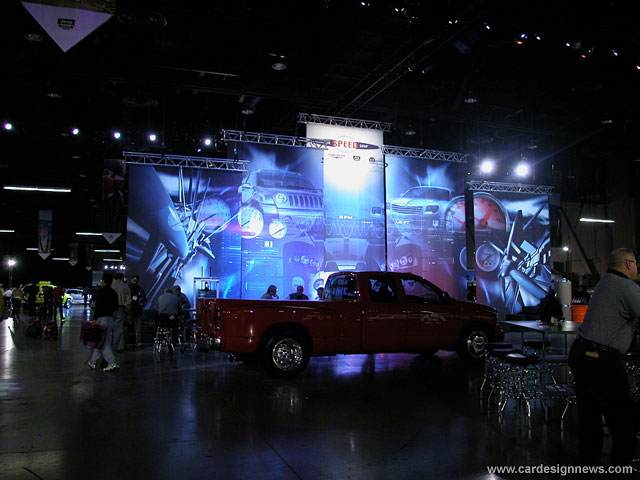 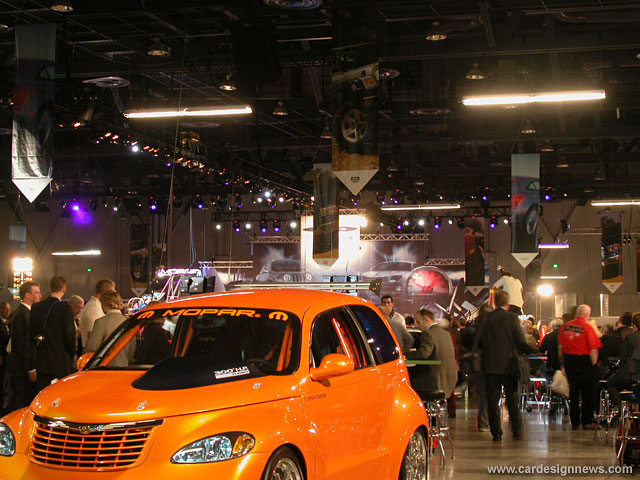 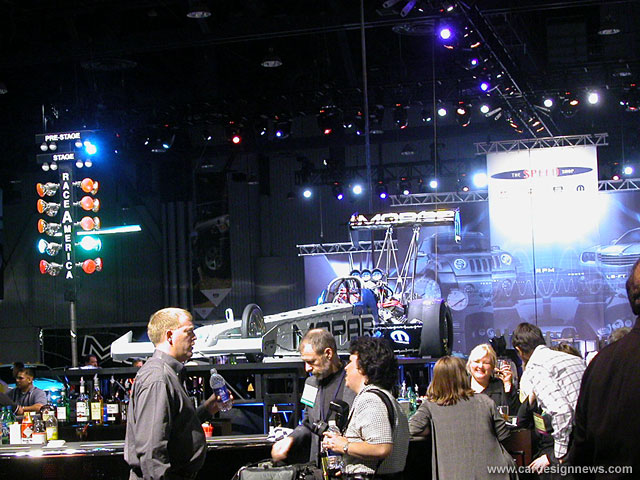 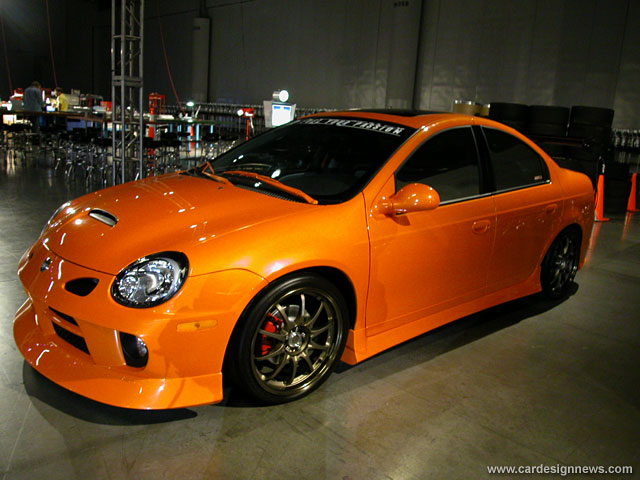 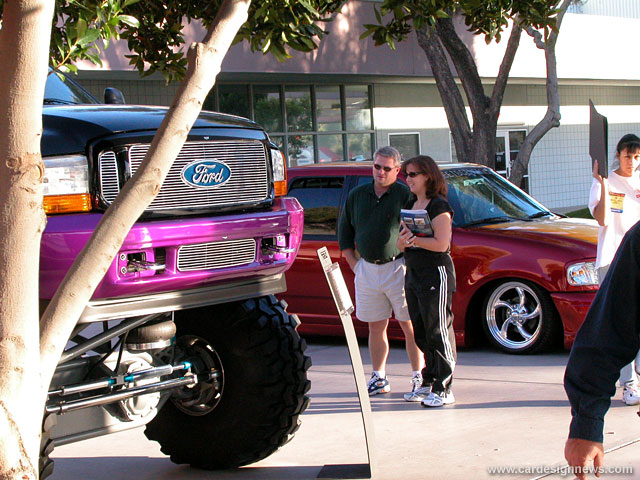 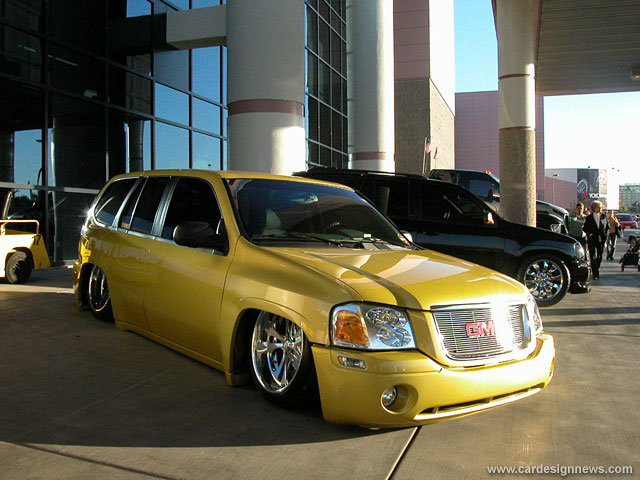 Young customers are the prize every auto manufacturer seeks to capture. Over their lifetimes, youthful buyers represent a greater value than mature clientele, and, according to the U.S. research firm AutoPacific, most of the male of the species plan to dress up their vehicle with high-profit accessories. Seventy percent will add a better audio system, half will upgrade their tires and nearly four out of ten will add new wheels.

Adjacent to the hall housing vehicle and parts manufacturers was a wing devoted to individuals and small groups who have put their dream cars together. This vivid collection of lowered, tuned, rainbow-colored and heavily-altered cars and trucks contained some celebrities, including Vin Diesel's Dodge Charger from the film The Fast and the Furious.

The $140 million boxoffice hit has boosted the accessory business in recent years. According to SEMA spokesperson Rosemary Kitchin, in 2001 people in the U.S. spent more money buying aftermarket auto products than they did on video games and movies on tape and DVD. According to SEMA's own literature, sales of performance and appearance equipment reached nearly $26 billion last year, up four percent over 2000 and outpacing the U.S. economy's anemic one-percent hike in economic output.

Rosemary furtively slips me a pass to the main event, a special announcement sponsored by DaimlerChrysler aimed at 3,000 of its U.S. dealers.

Chrysler? Once a U.S. pioneer in muscle-car performance, its MOPAR Division badly missed the wave of enthusiastic tuners, who now prefer to pilot high-revving, overhead-cam Asian products. The firm had high hopes of attracting a younger crowd with its PT Cruiser and even backed anthropological research to help boost its "reptilian" styling. However, the retro-themed PT Cruiser managed to attract more forty-year-old owners than the desired youthful clientele.

Squeezing past booths selling long-lasting paint protection, tight-fitting racing-themed tank tops and rugged bike racks that strap to the front of $80,000 sport utility vehicles, I encounter the side of SEMA distinctly different from the glitz one normally associates with the event. For the week is also an important showcase for small firms introducing first-time products. Innovators may be designers or engineers, and each is a dreamer.

Visions range from the wildly passionate and inspired to the minutely specific and technical.

The Gifford RAM Recon project began as a rendering among coworkers at an automotive trade magazine. Rather than making their Dodge Hemi pickup truck stand out, their idea was to utilize creative design to help it blend in.

"For all the outdoor folks, we wanted a stealthy appearance and a darker vehicle to help hunters fit into a natural environment," notes chief designer Ron Gifford. Fenders, front and rear fasciae and both rear quarter-panels are covered with strikingly realistic forest camouflage. His motivation?

"It's a pretty cool vehicle, and we like to do these a lot."

Another pioneer, Mitchell Yow of Under/Overdrive, has painstakingly engineered an eight-speed manual transmission that is targeted at one customer: performance-hungry GM executives in charge of powertrains for the Chevrolet Corvette. His firm's booth is dominated by the massive, cylindrical driveshaft that he hopes will catch the attention of his clientele.

"Keeps gears nice and close together, runs more rear-axle ratio, really changes the personality of the car, fast shifts, keeps the engine and power, really improves the acceleration, wakes it up," reels off the engineering-minded innovator.

As the DaimlerChrysler luncheon approaches, word leaks out that the firm may be planning a major announcement concerning its parts and accessories efforts. I reflect on the uphill struggle this represents.

Honda and Acura, preferred brands among tuners and appearance accessorizers, are announcing major new FP (Factory Performance) trim levels for their U.S. Accord and RSX model lines. Ripping away the baton from Chrysler and Pontiac engineers and stylists who staked out Detroit's Woodward Avenue in the 1960s, Asian engineers are learning a lesson from their street-racing clientele.

Moments later, I arrive at the DaimlerChrysler luncheon, packed with vocal U.S. automobile dealers. A simple checkered-flag napkin, playfully stuck into the glassware at each table, provides the only decoration. Some dealers complain that the adornments are less lavish than in any previous year.

DaimlerChrysler executives milling in the crowd politely ignore the critique. As I place myself near the podium where CEO Dieter Zetsche will appear, I notice that a long, black duvatine curtain behind the stand extends the length of the large meeting hall.

"In the next model year, we will introduce 11 new vehicles," predicts Zetsche with his trademark terse precision. "And what kind of new vehicles will you find coming from the Chrysler group? I can tell you that they will be anything but the usual."

"In our Speed Shop, we do all the best work out on the edge where the other guys aren't. That's what we mean by innovation."

"But I am tired of talking to you about our speed shop. I'd rather show it to you... Come on, follow me."

A Hemi engine roars, and, as the massive curtain parts, a Dodge-powered truck whisks Zetsche's platform away from us. The ruse works. Applauding auto dealers race to follow the executive through the false wall into a darkened second hall. Like Faust yanked into a dim, orange-lit underworld, Zetsche plunges us into a prototype of the new Mopar Speed Shop, a performance center to be located at about 100 dealerships by 2003.

The SEMA Speed Shop prototype is carefully designed to promote an image of power and freewheeling innovation. It contains a floor-length bar overlooked by a nitro-powered dragster. Nearby, technicians strip down a Chrysler hemi engine and operate a working dynomometer as stunned dealers begin to wolf down gourmet sandwiches at three fully manned food stations.

"We looked at a recent auto show and ran across a customized vehicle that impressed us," he recalled. "It made us see that we may be stuck in conventional thinking."

Will the Speed Shops and a blitz of new products be sufficient to alter the tide of young owners to Asian makes?

Schroer is candid about the primary challenge of the attracting buyers in the young, technology-driven generation. "Today, these young kids smell b.s. Moreover, they are taking small-displacement engines then going to aftermarket products and tricking them up to 180 horsepower." The Dodge SRT4 is a response with 215 horsepower and zero-to-sixty miles-per hour acceleration of 5.9 seconds.

Like the performance-minded clientele Zetsche and Schroer hope to attract, SEMA is dominated by energy and innovation. The four-day show is a mix of exuberant pioneers, expressive cars, and fans of all ages. At the end of 2002, billions will have changed hands for faster cars, more plush and showy interiors and louder audio systems. For enthusiasts young and old, they bring the promise of accelerated heartbeats and elevated levels of adrenaline.