Driven: a week with a Chevrolet Volt 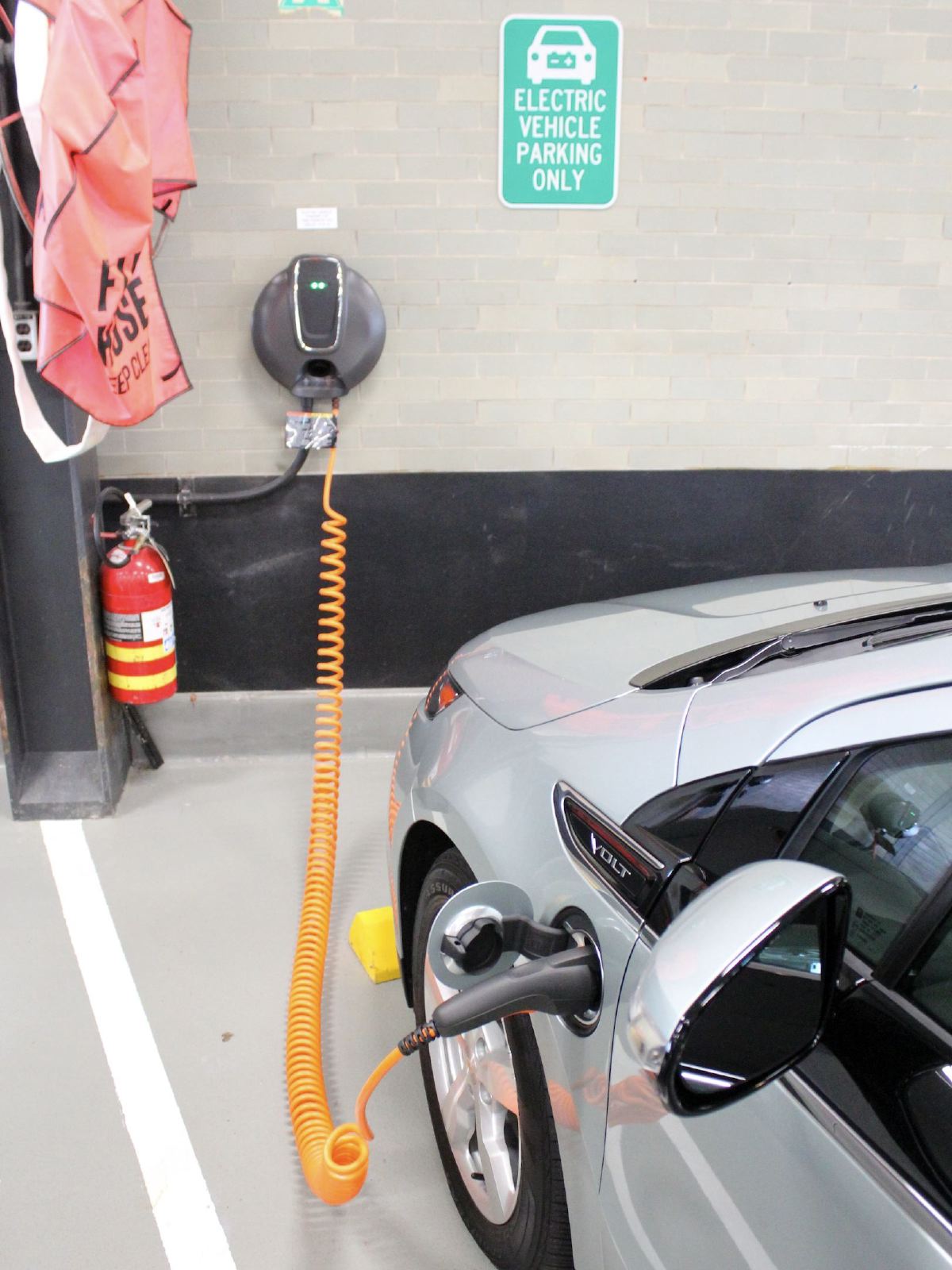 Sole charge of the entire trip: plugged into the 240V unit in a garage at GM. Click for larger images

Video: Dave Lyon talks about the Volt's design and the challenge of designing around a new type of powertrain (click to play) 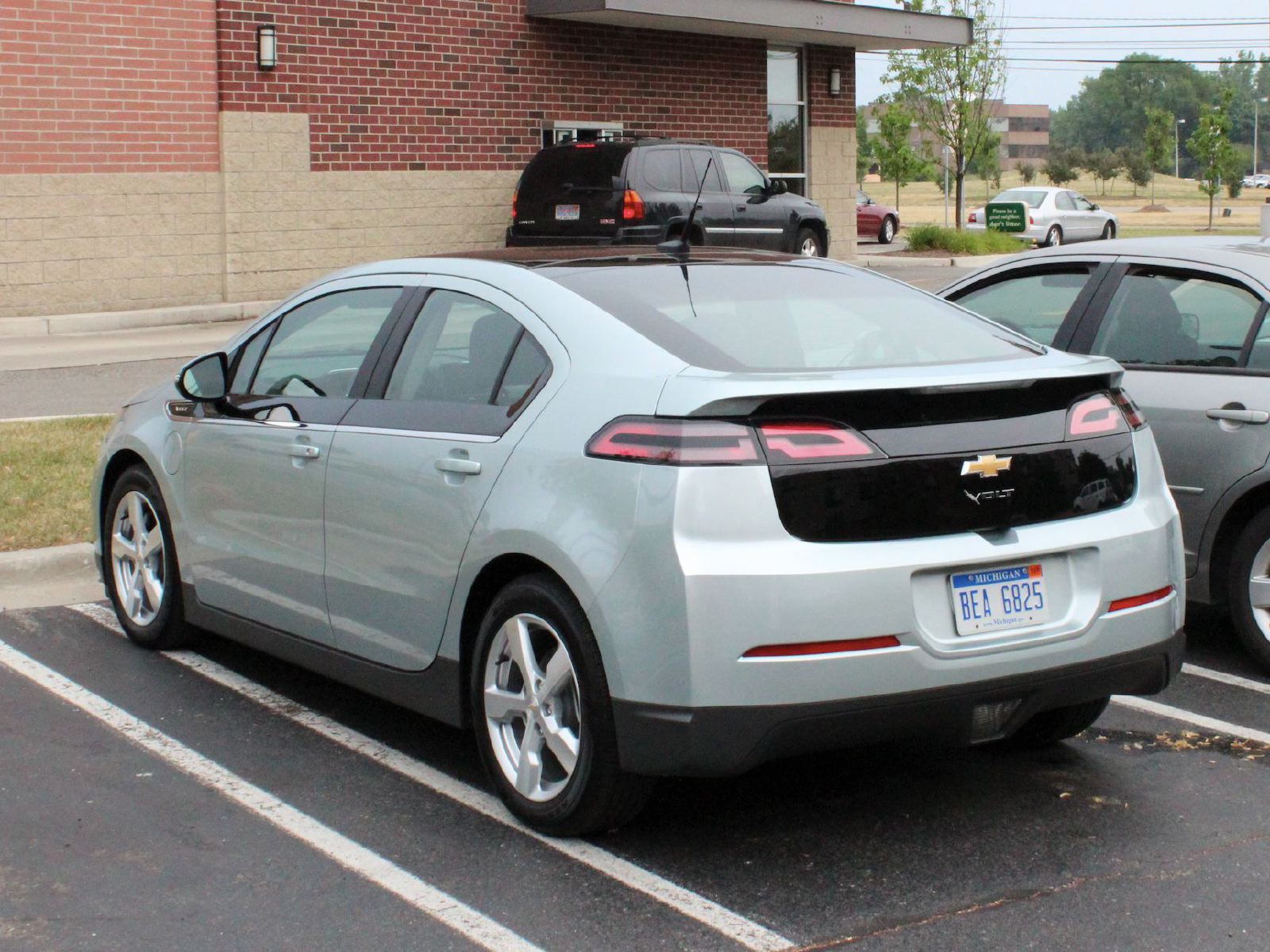 Sorry no room at the inn: Hotel didn't have anywhere to plug-in the Volt and charge it, so most of the driving was done on fuel 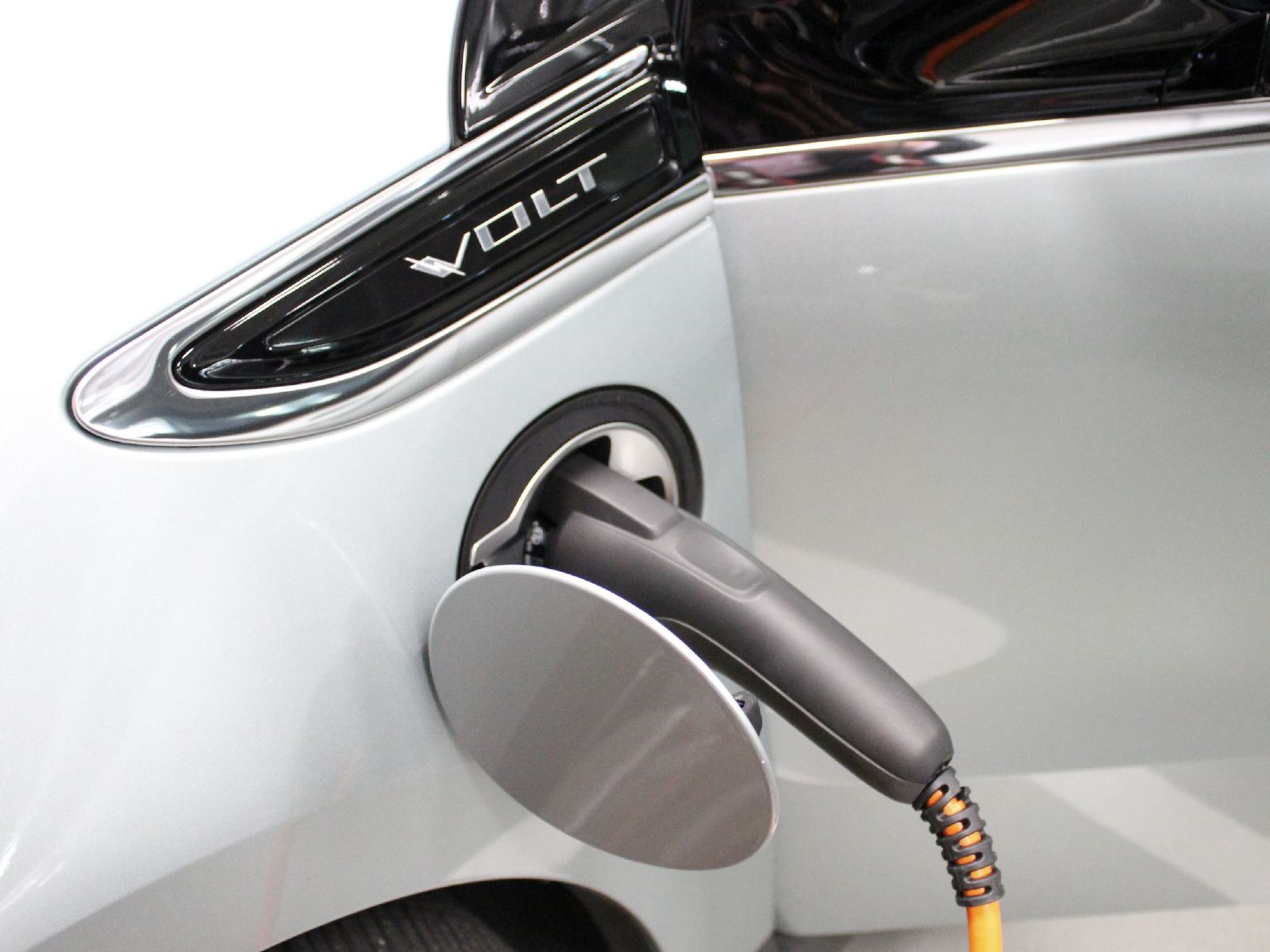 Plugging the car in to charge an easy task 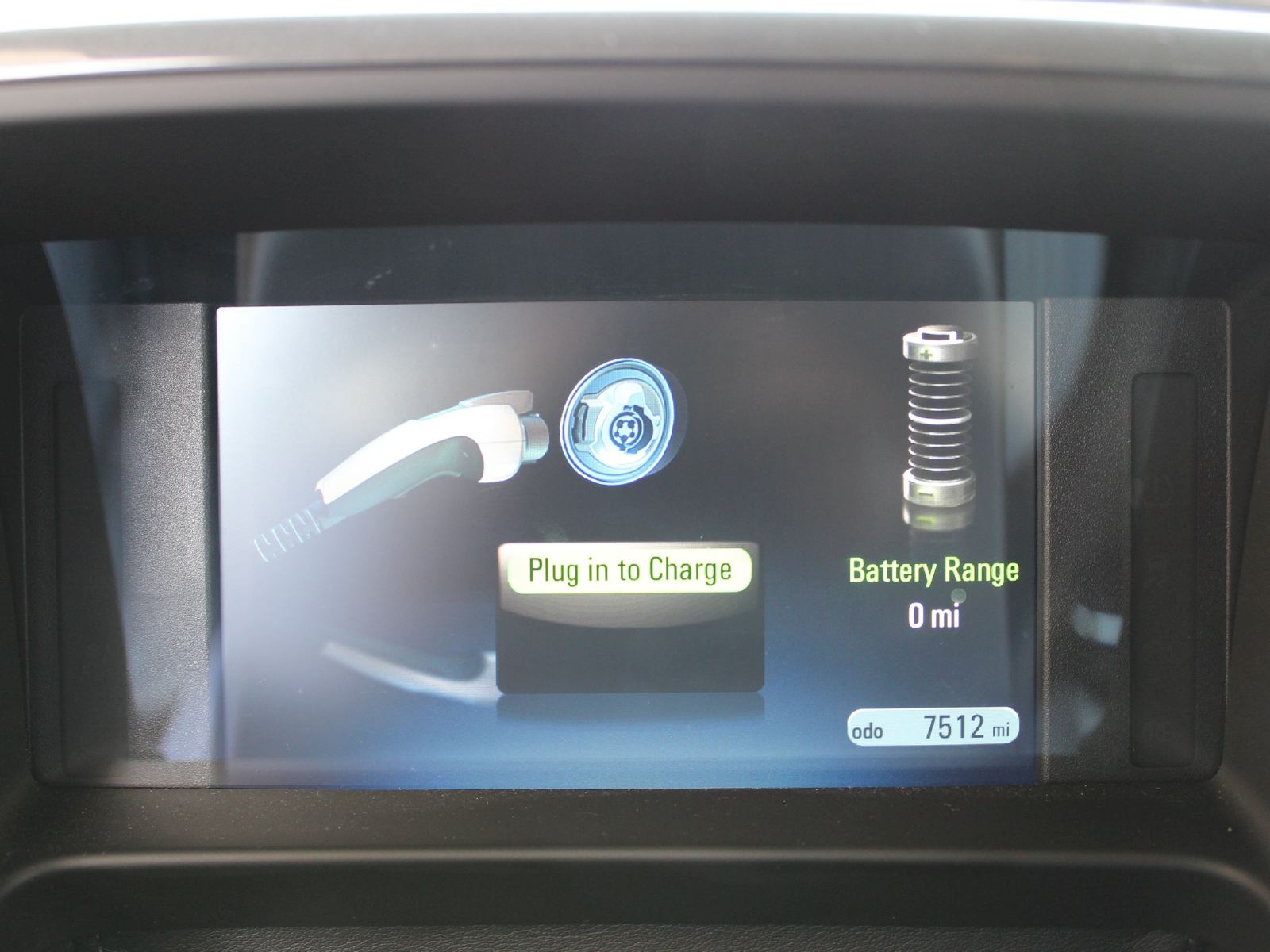 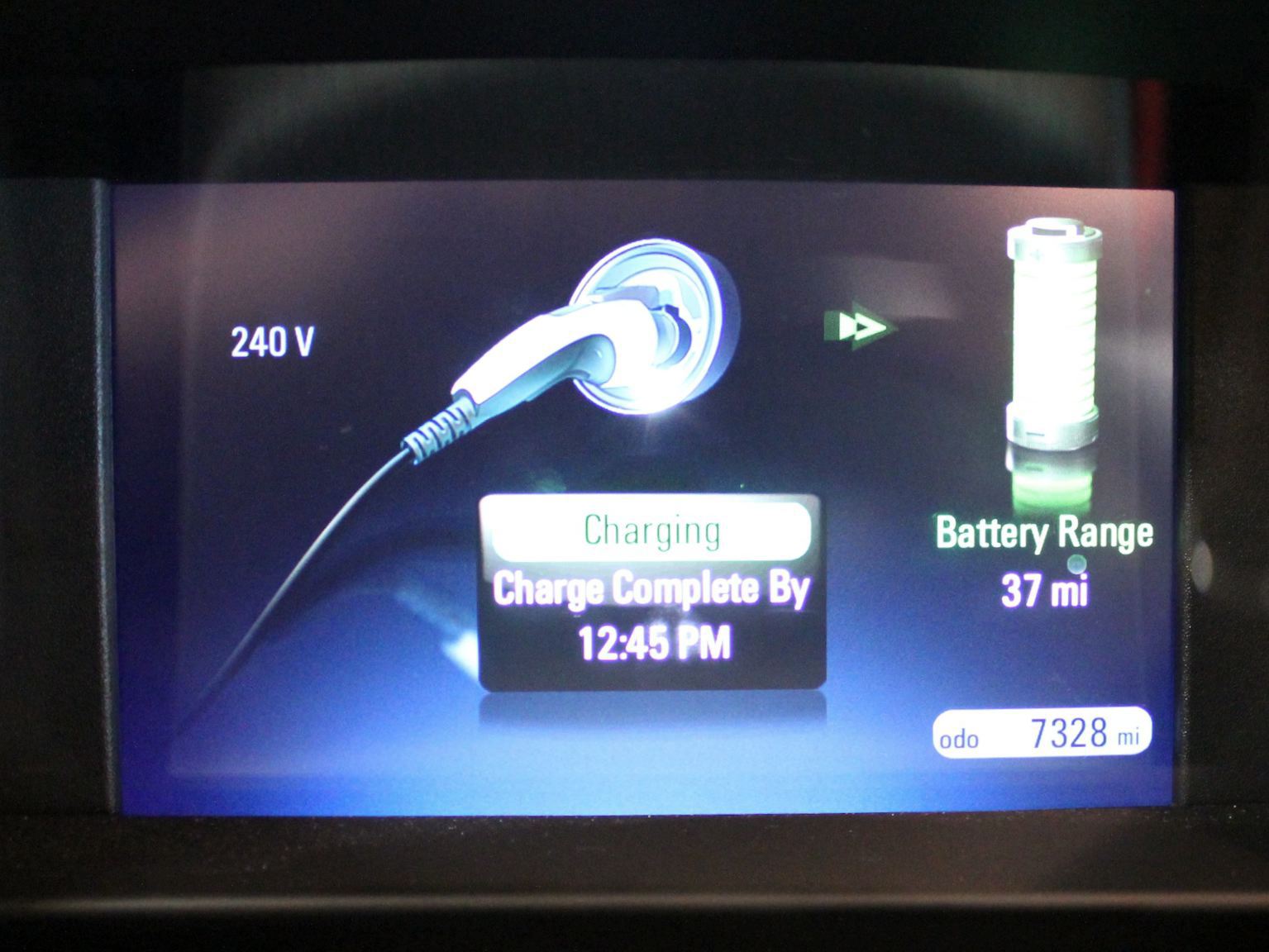 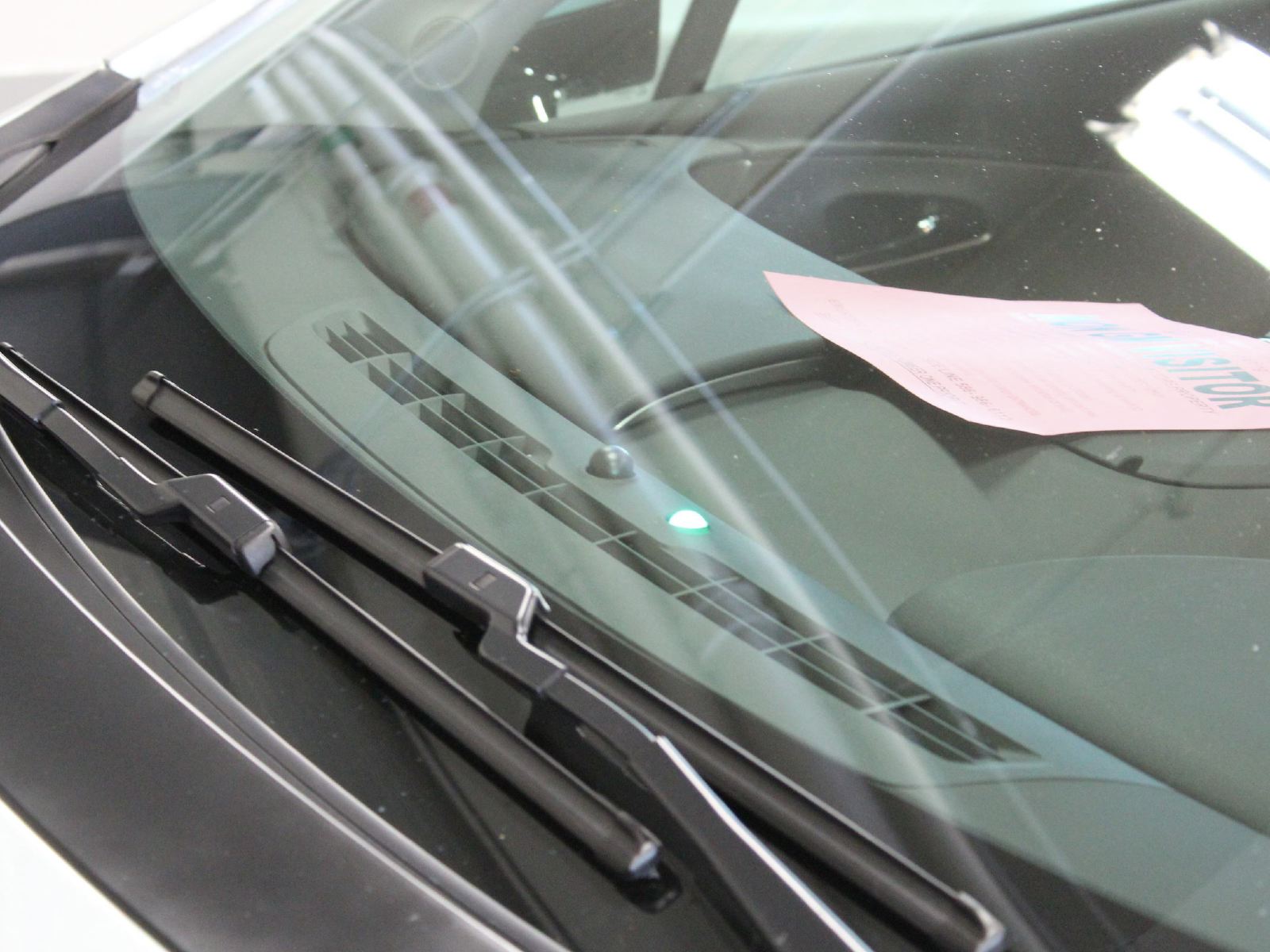 Green light at the base of the windscreen blinks when charging, changes to a solid green light when battery is fully charged

In Fall 2010, before the Volt went on sale in North America, we sampled an early build model and came away so impressed, we declared it the car for the digital age.

Since then the car has received harsh criticism from the press and been outsold by the Nissan Leaf in the North American market. Given the unique powertrain, we felt longer exposure to the Volt was therefore in order, so on a recent trip to Michigan, we lived with one for five days. Would familiarity breed contempt…? 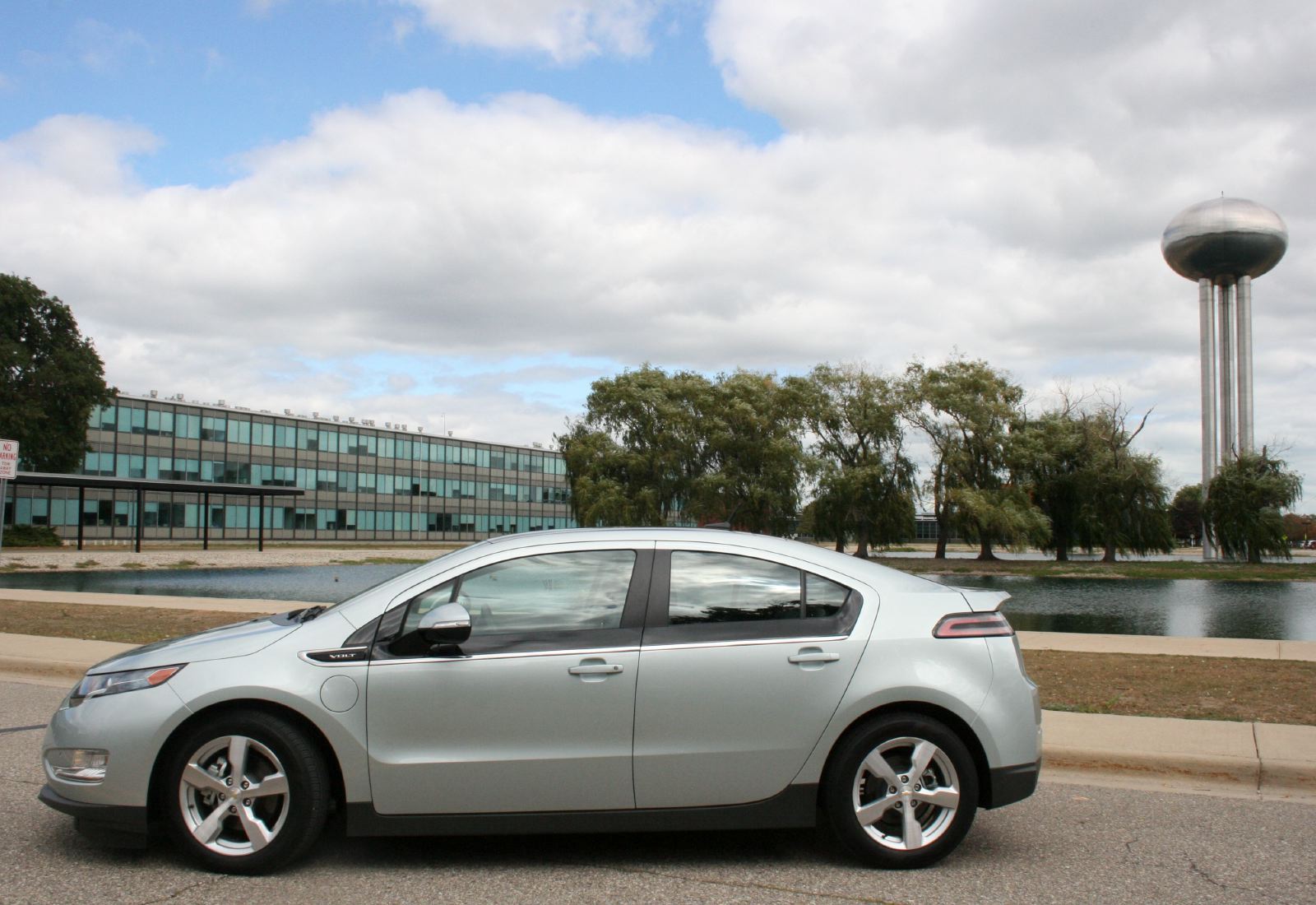 Above and below: The Volt at GM's Warren Technical Center in Michigan 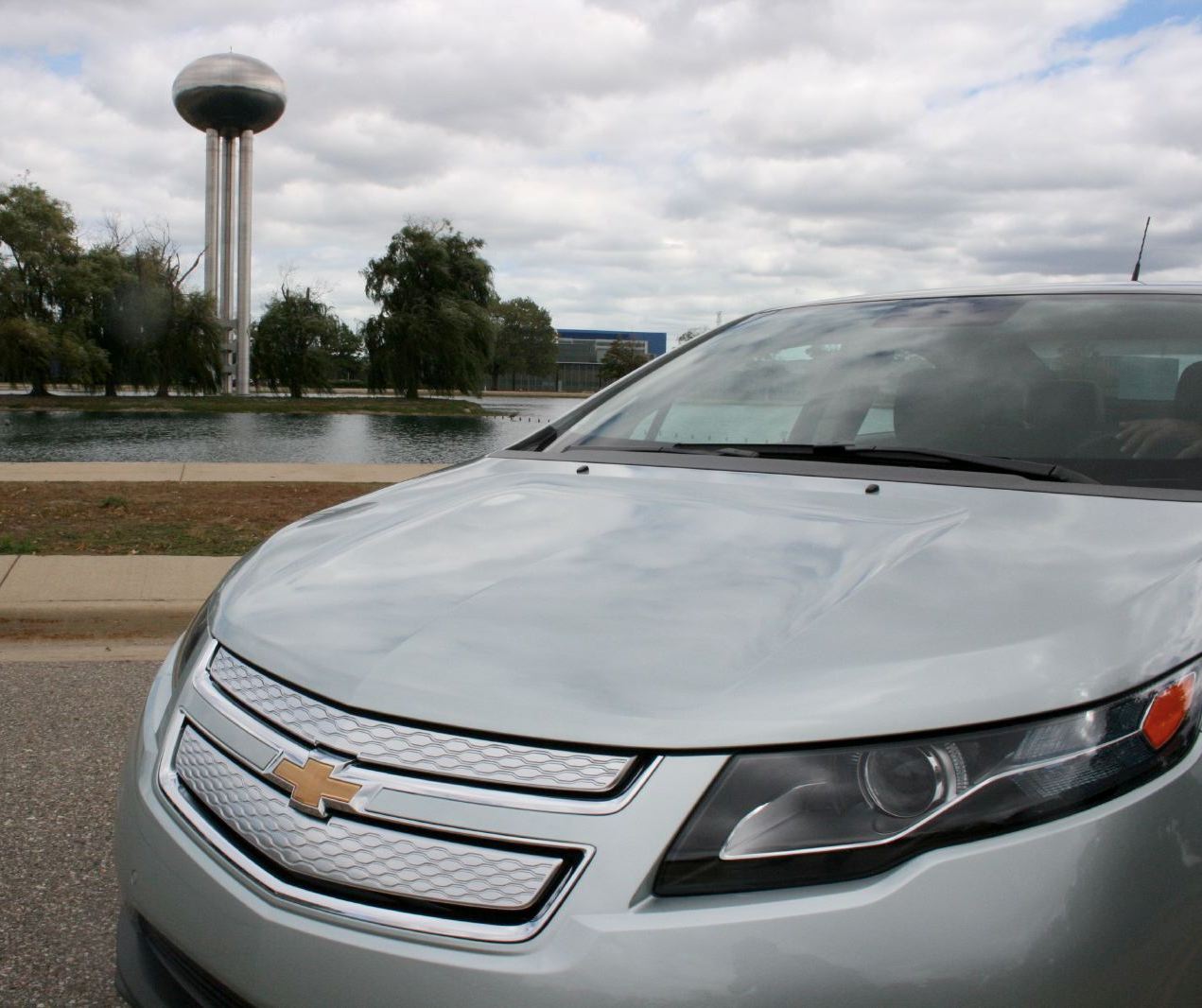 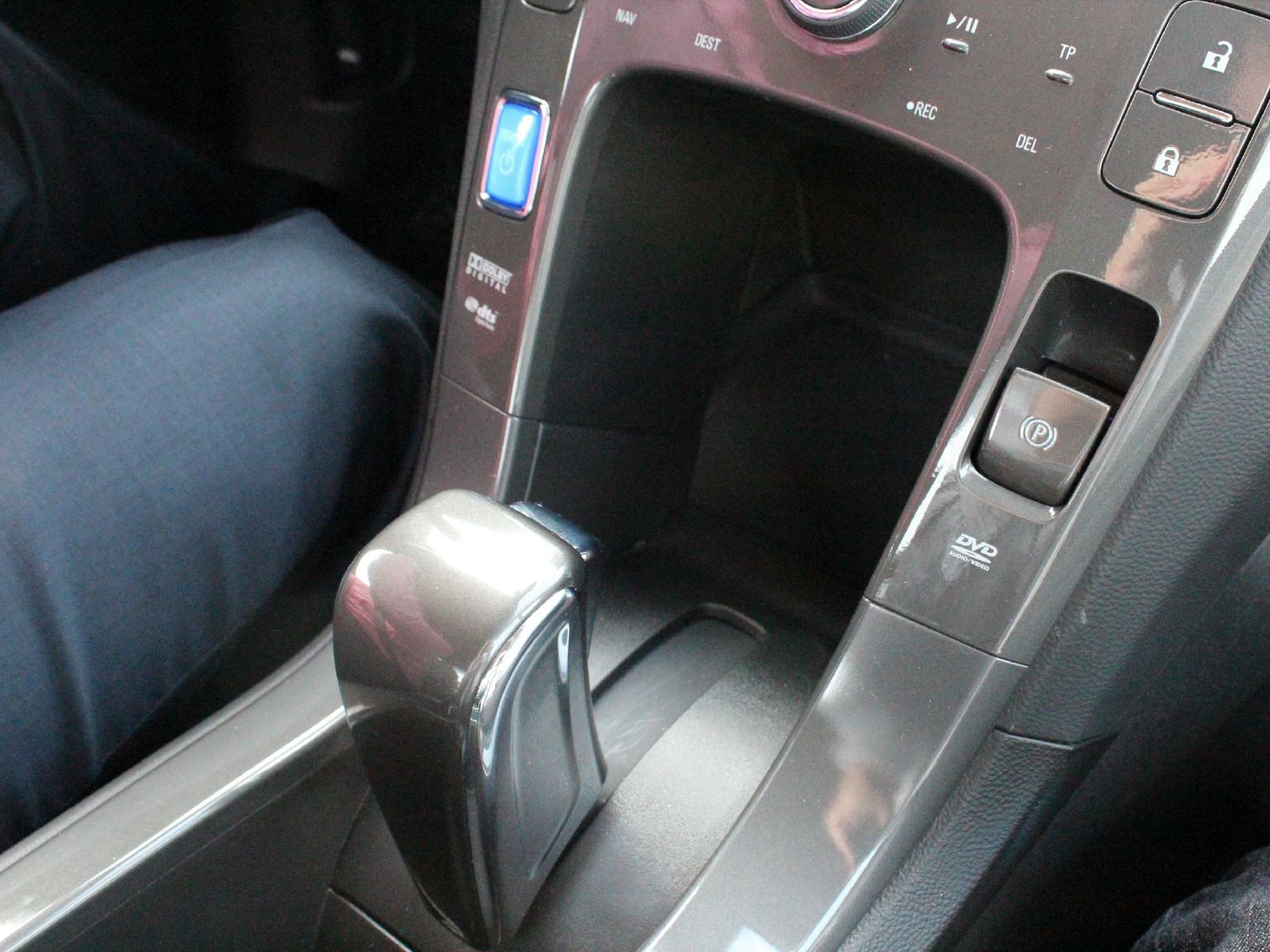 Conventional shifter characterizes GM's approach to the interior design, there's nothing to confuse the first-time driver 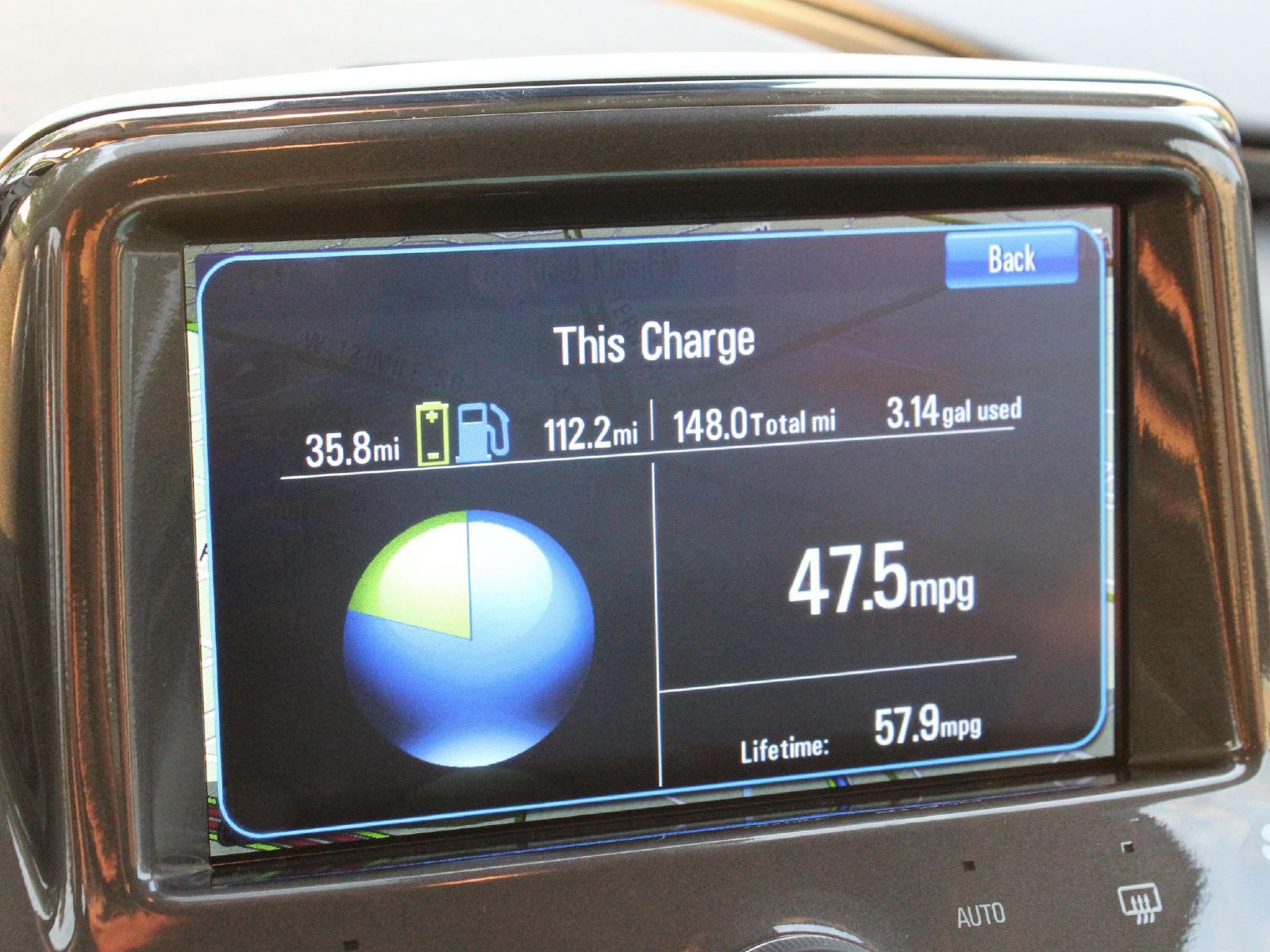 By the end of the first day, fuel consumption was a disappointing 47.5mpg 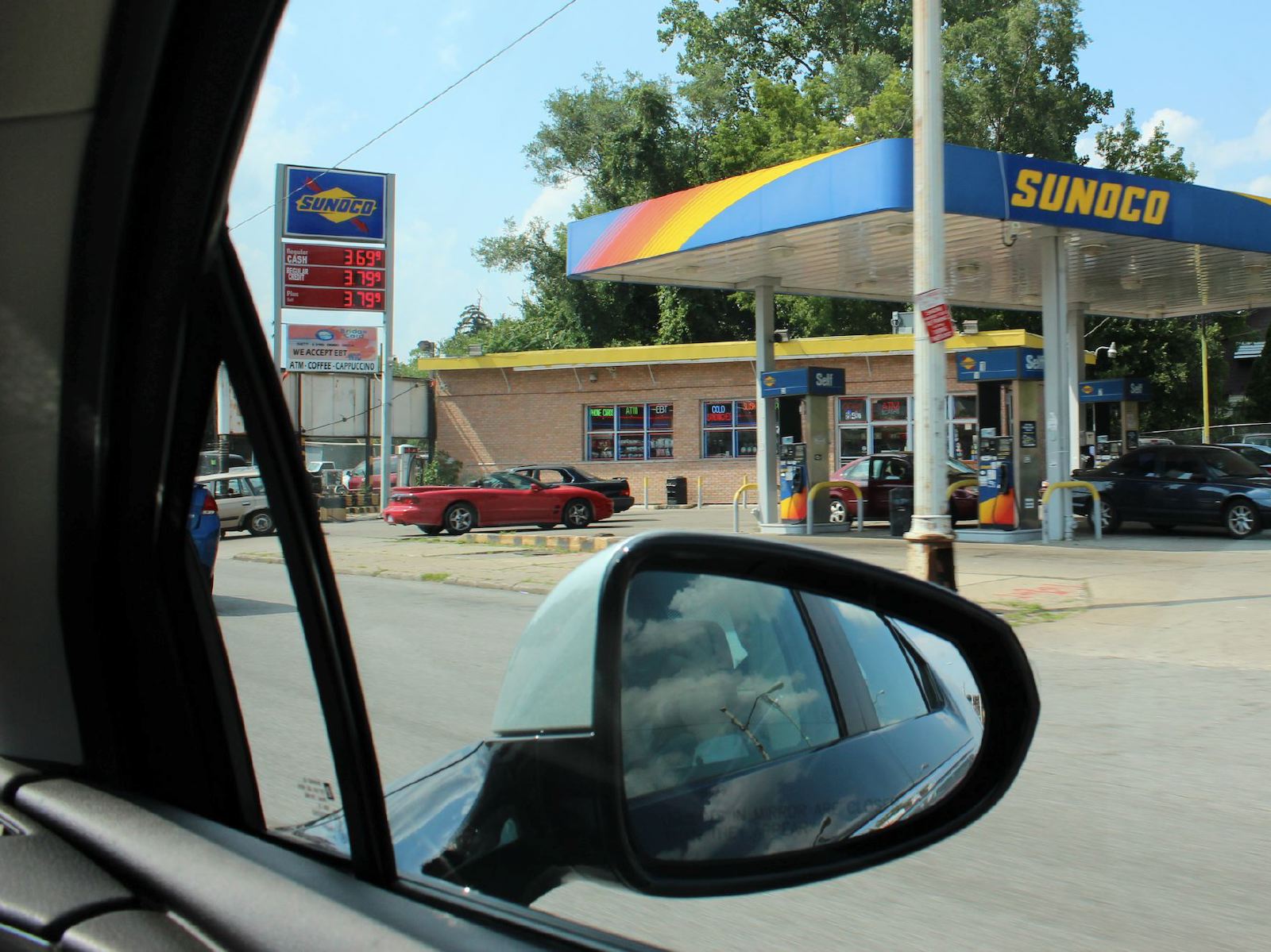 Despite decently sized rear view mirrors, the Volt suffers from a bad blindspot

“The battery’s just depleted as I drove round from the parking lot”, reports Dave, our cheery delivery driver at Detroit Metro Airport. Thus our trip begins in ‘extended range’ mode - the Volt powering us to the hotel on very un-car 2.0 ‘gas’. It also fails to swallow the luggage myself and publisher Abel Sampson have packed for the trip without necessitating folding down the rear seats. Blame the relatively high trunk floor caused by the packaging of the charging equipment below.

Things improve onboard. Fears about the air conditioning not being up to the task of cooling down 105F heat are instantly dismissed (it was re-engineered specifically to stop it gobbling electric range). And it’s easy to simply jump in and drive the Volt, more so than the Toyota Prius - whose bizarre gear selector confuses many a first-time driver. Given GM and Chevrolet’s desire to get Volts into the hands of as many people as possible (including via rental fleets), that’s probably a good thing.

Cruising at freeway speeds, the Volt impresses. It’s refined, even with the engine/generator whirring away. Only a massive over-shoulder blind spot creates an issue, leading to us nearly wiping out the Volt into the path of a passing Ford Pickup.

Checking into the hotel, we begin the first of many conversations that pan out in the same way. Asking “we’ve an electric car and wondered if there’s anywhere we can plug it in?” results in a mixture of amusement and puzzled faces on the other side of the desk. Nearly everywhere we go the answer’s eventually the same. “No, we’re sorry, we don’t have anywhere you can plug it in - and no you can’t trail the extension lead through a window.”

By the end of the day, we’ve covered 148 miles, used 3.14 gallons of fuel and have ‘averaged’ 47.5mpg according to the Volt’s computer. Maybe tomorrow we’ll find somewhere to plug it in.

Ultimately it wouldn’t have looked very good on the company if we’d turned up at GM with one of their plug-in cars and been unable to find a charging point for it. Doing so gives us an opportunity to sample a process that’s ultimately much easier than filling a car with fuel, but clearly still a barrier to some customers.

Popping the power socket door illuminates a new graphic on the main driver binnacle screen, ‘ready to charge’. Then it’s just a matter of hooking the seven-pin plug from the wall into the car’s socket (positioned in front of the driver’s door), which engages with a firm click. A green light begins to flash on the top of the IP, just under the base of the screen. Come back to it solidly illuminated and you know your Volt’s charged.

Later in the day, we spend time with Dave Lyon (see video), Executive Director of Interior Design at GM, who tells us more about the challenges of designing for a new powertrain, while acknowledging that the cost of the powertrain meant there were some compromises in certain areas of the design. He’s adamant however, that the decision to not use soft-feel plastics was primarily about saving weight, not cost.

There is a different style to adopt when driving the Volt. What’s communicated by the two screens ‘coaches’ you into eking out the battery life, and better fuel economy.

It doesn’t offer the ‘geek out’, hyper-miler info splurge of a Prius, nor the multi-customizable, leaf-growing qualities of Ford’s Smart Gauge. Yet the Volt’s compromise between these two feels about right. The spinning ball is all you need to understand how economically you’re driving, at a glance, while a deep drill down on how you’re doing is offered in the deeper system menus. But when driving, you never feel nagged - and consequently don’t end up holding up traffic, by accelerating glacially - in the way many drivers of the Toyota Prius do.