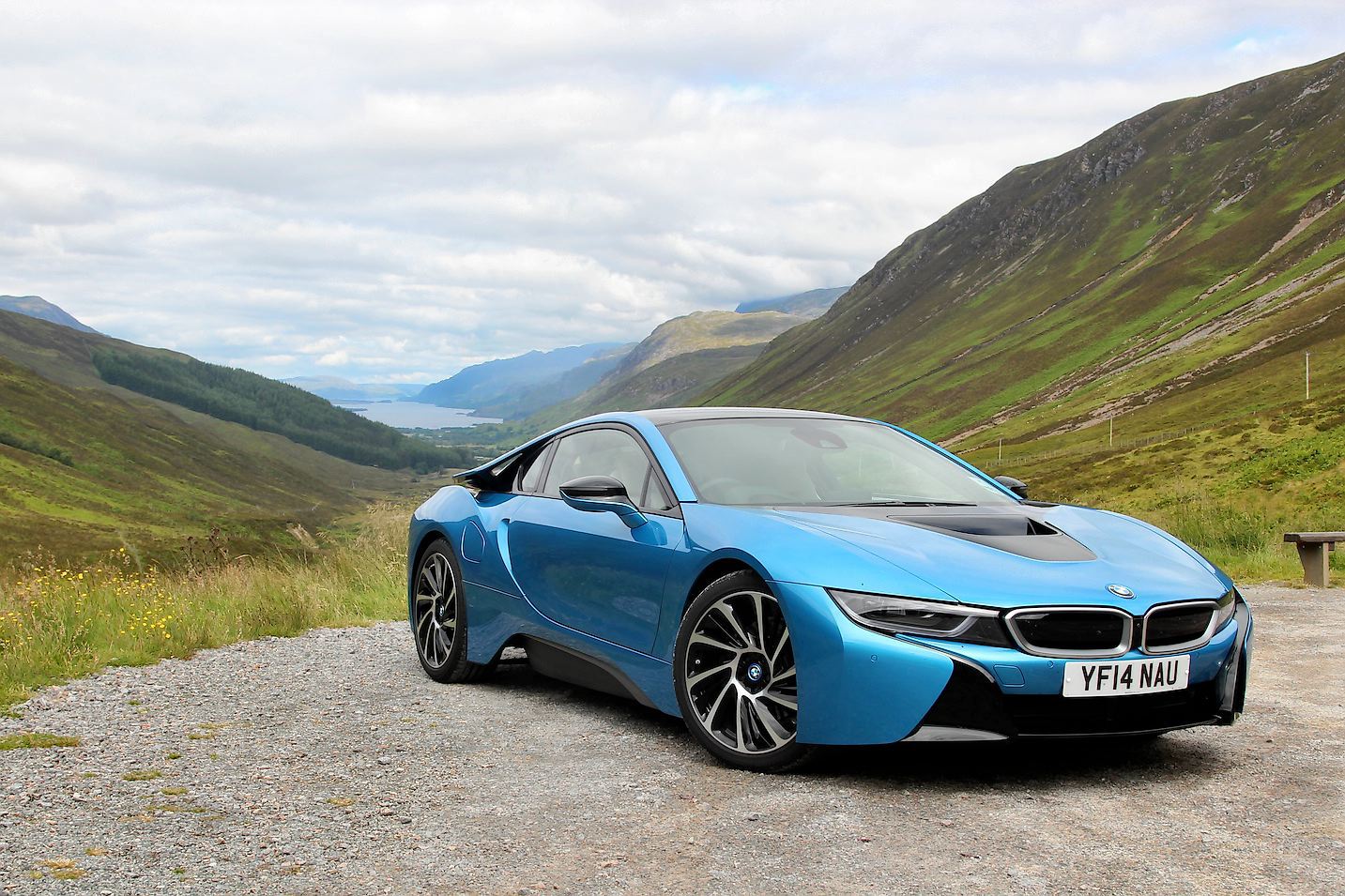 The BMW i8 lands in the Scottish highlands. Click for larger images 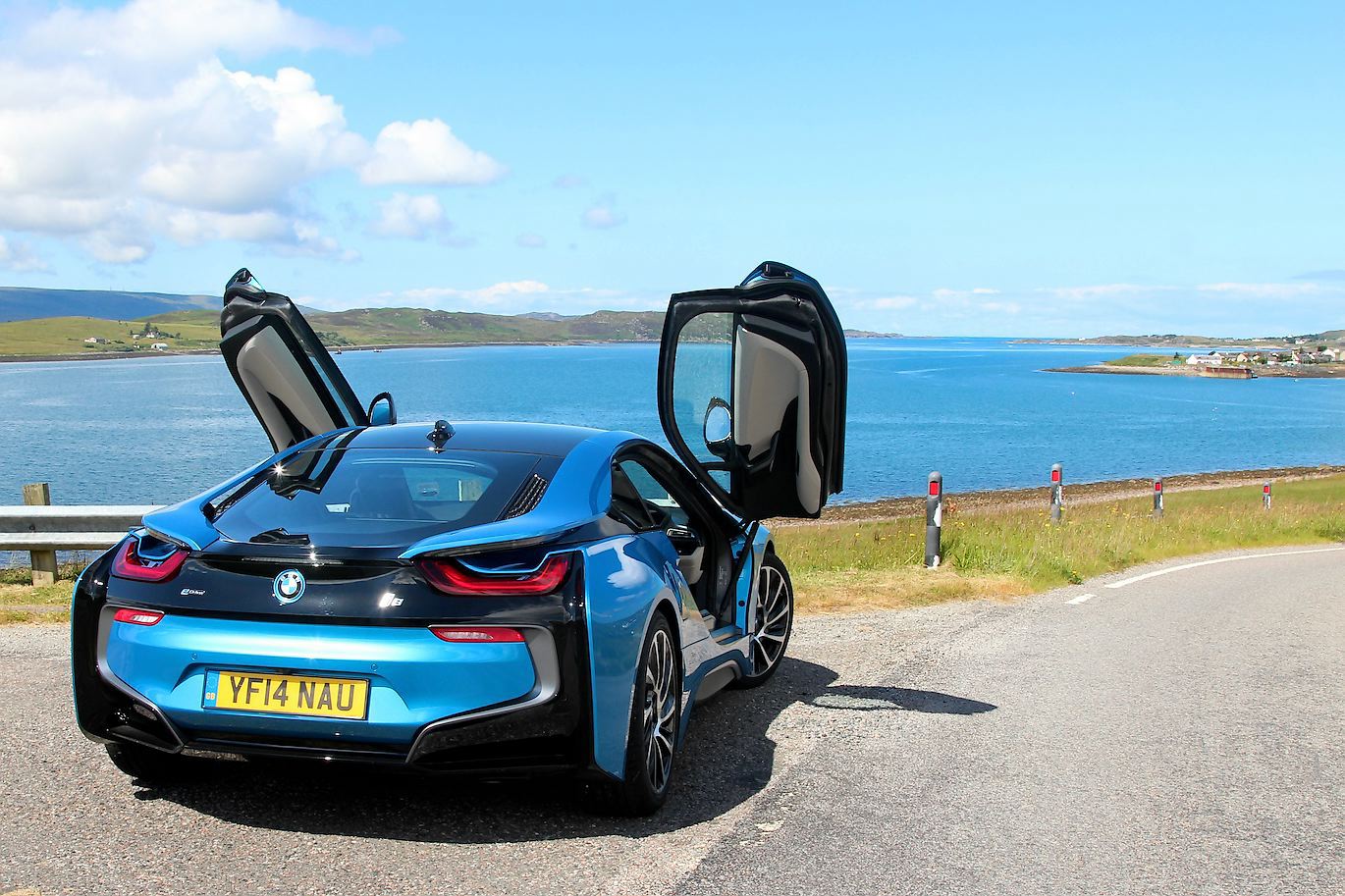 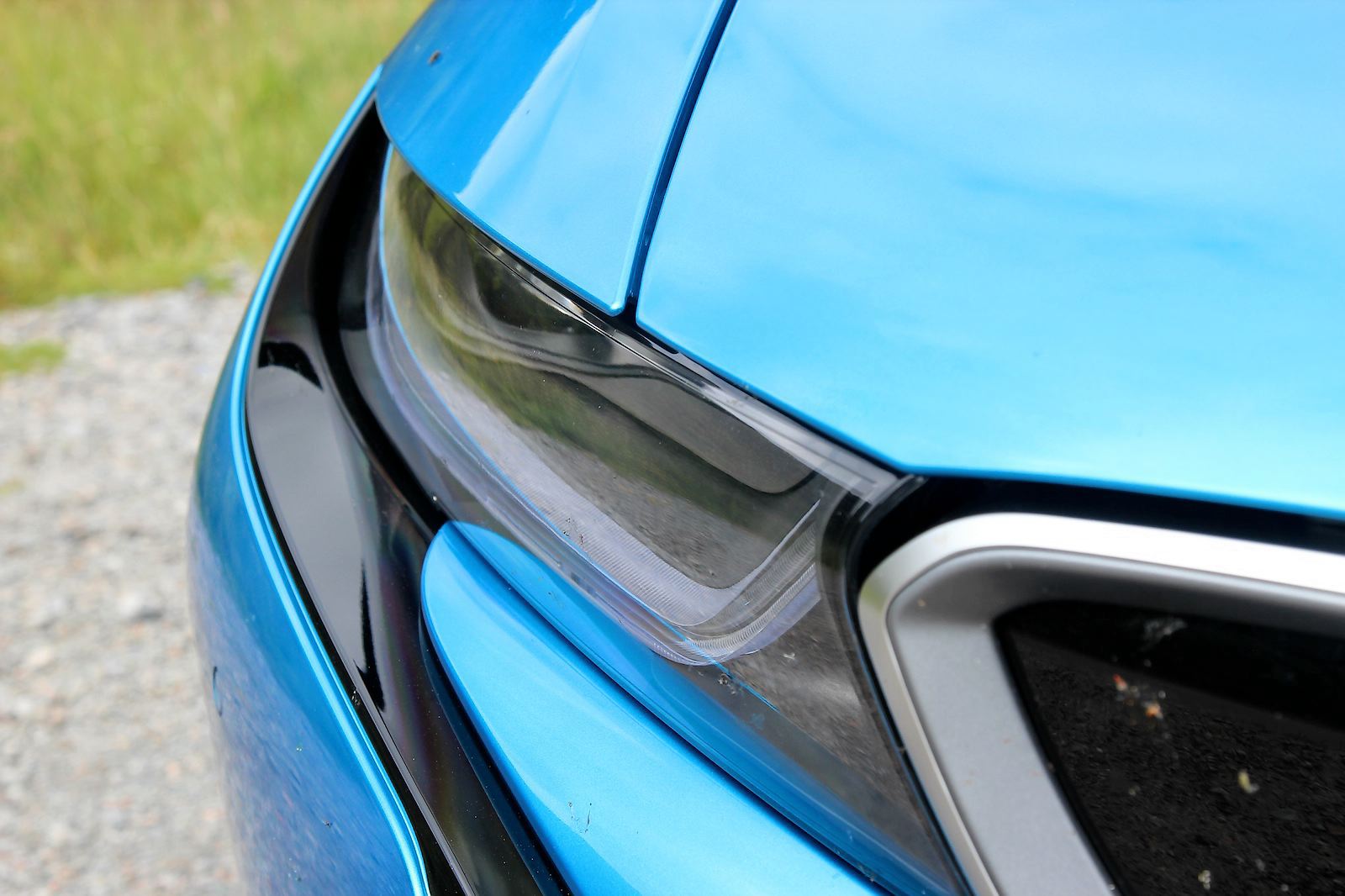 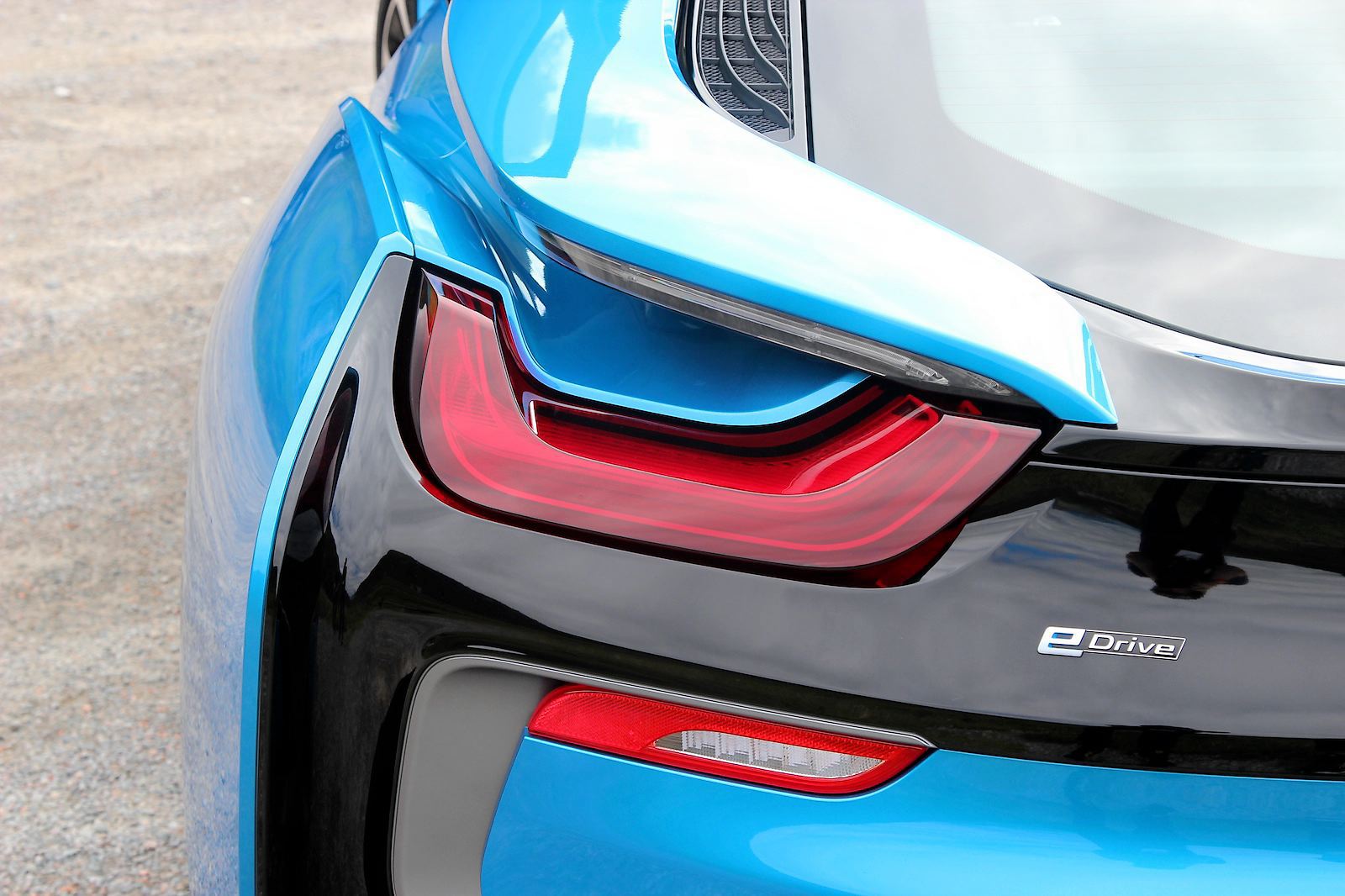 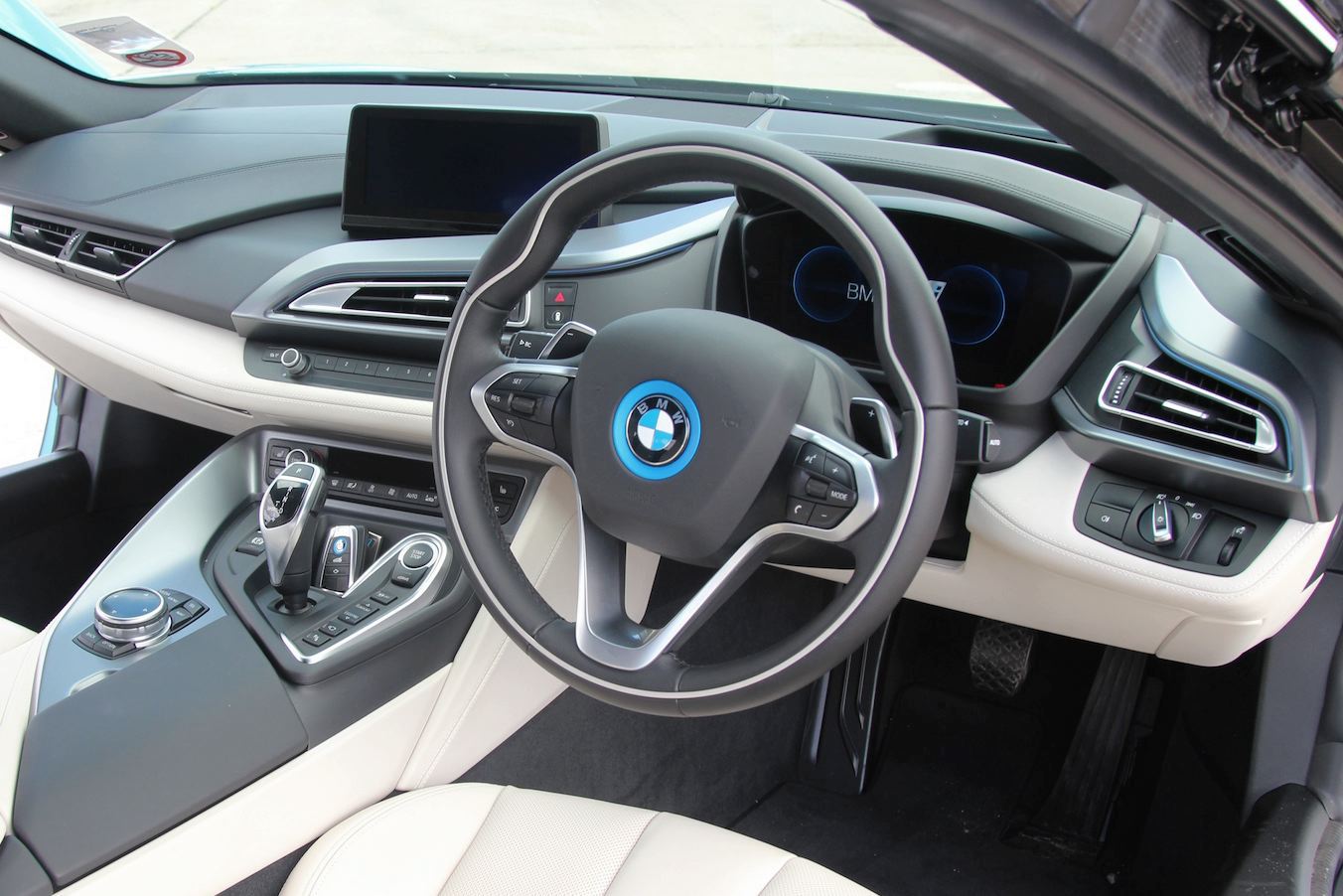 Layered dash continues exterior design themes, but isn't quite as a successful 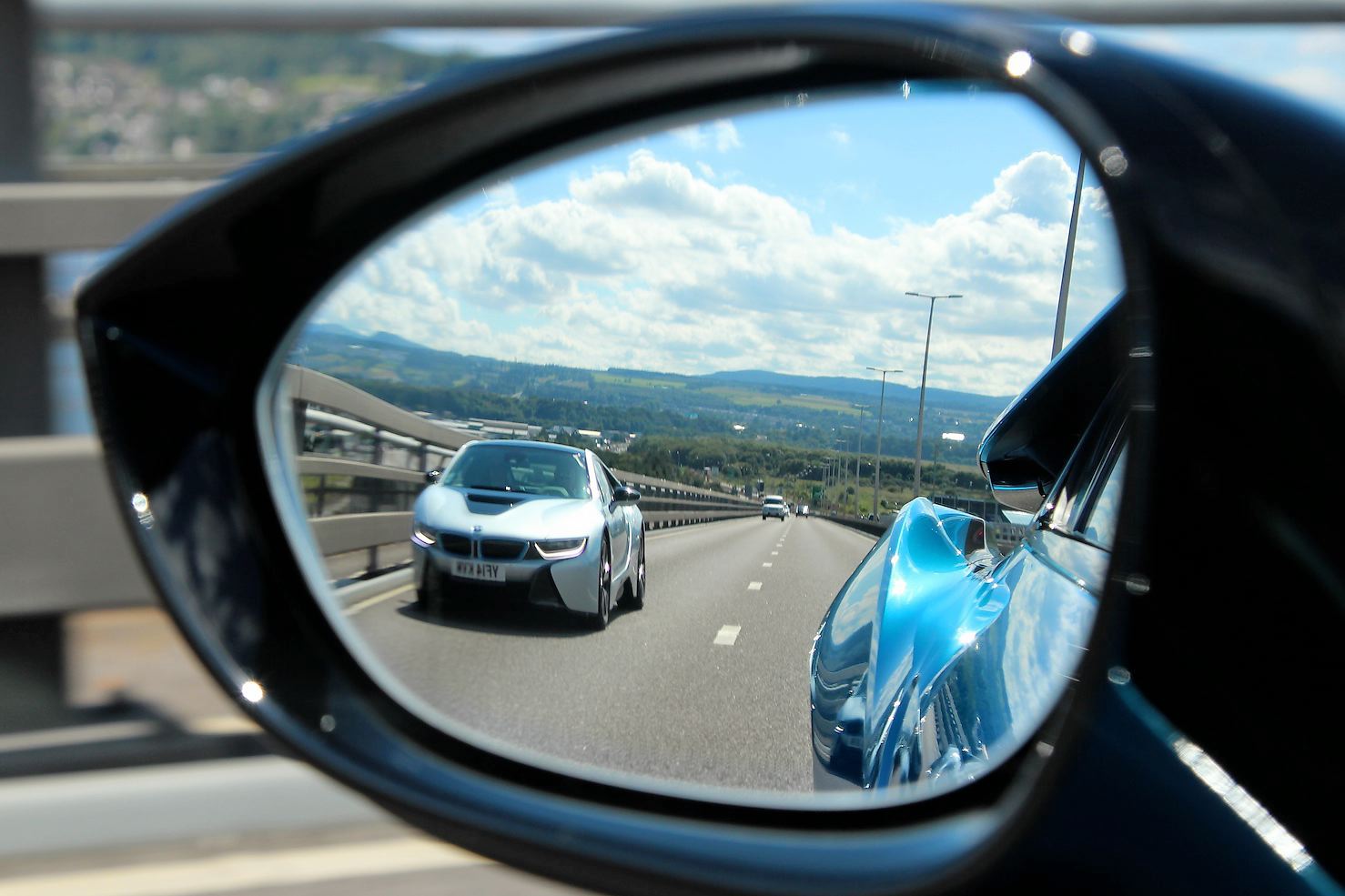 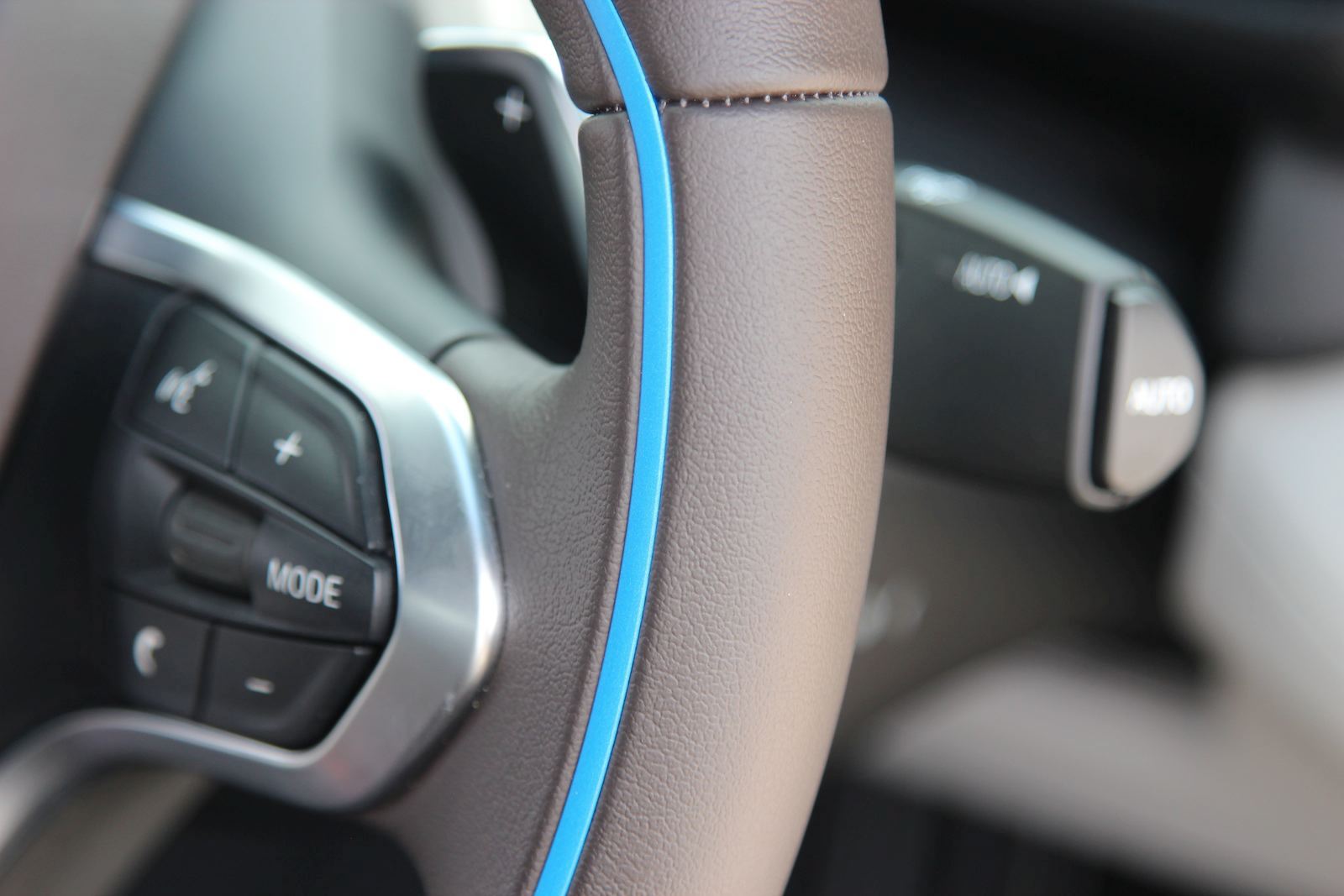 Closer inspection reveals many minor controls shared with other BMWs 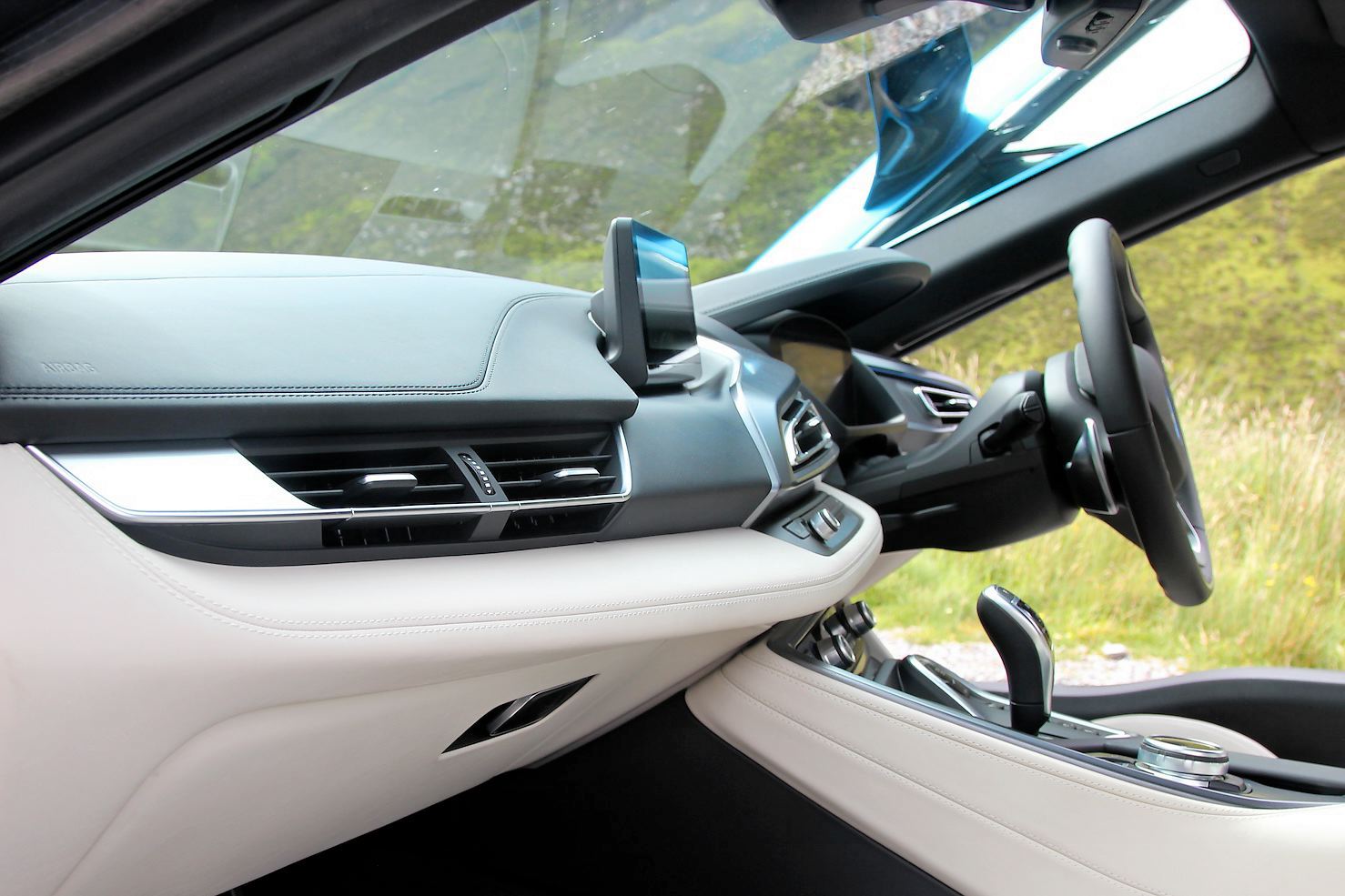 A-pillars are set at a very fast angle 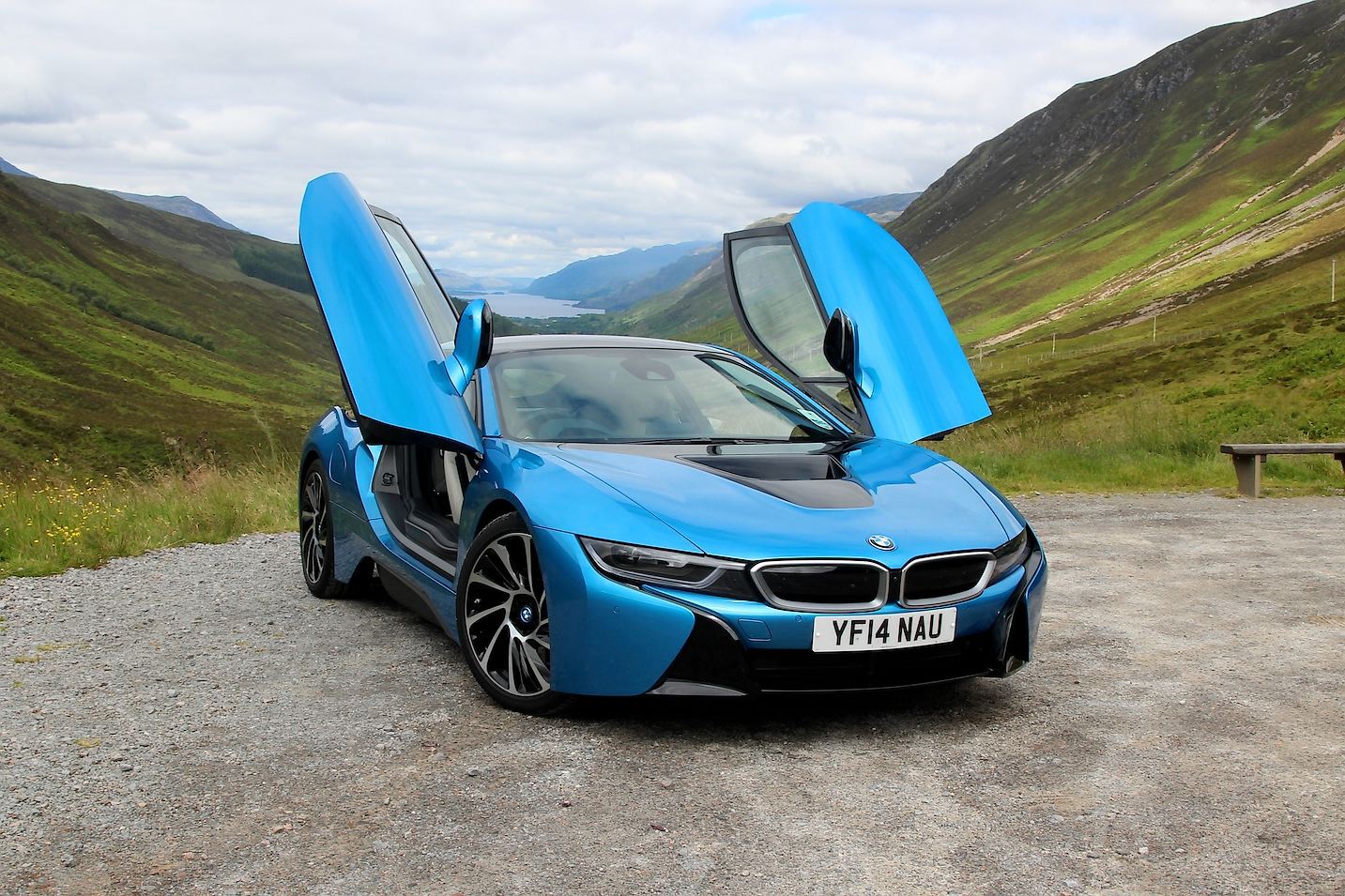 When BMW unveiled the Vision EfficientDynamics concept at the 2009 Frankfurt motor show, we wrote: "for our money, it's the first time a major carmaker has really attempted to communicate ‘green' technology in an aesthetic sense."

Fast-forward five years and we've swapped the show halls of the IAA for a beauty spot on the north-west coast of Scotland. And, while the car's name has changed to i8, our sentiment towards this genre- and era-defining car remains.

Admittedly the production car's design execution hasn't received the universal praise of its concept forebears, but, on a remote outpost of the British Isles, a Protonic Blue i8 couldn't look more exotic. Half of smartphone-wielding Scotland appears to be stalking us, keen to capture a grinning selfie with the car that looks like nothing else on the road. 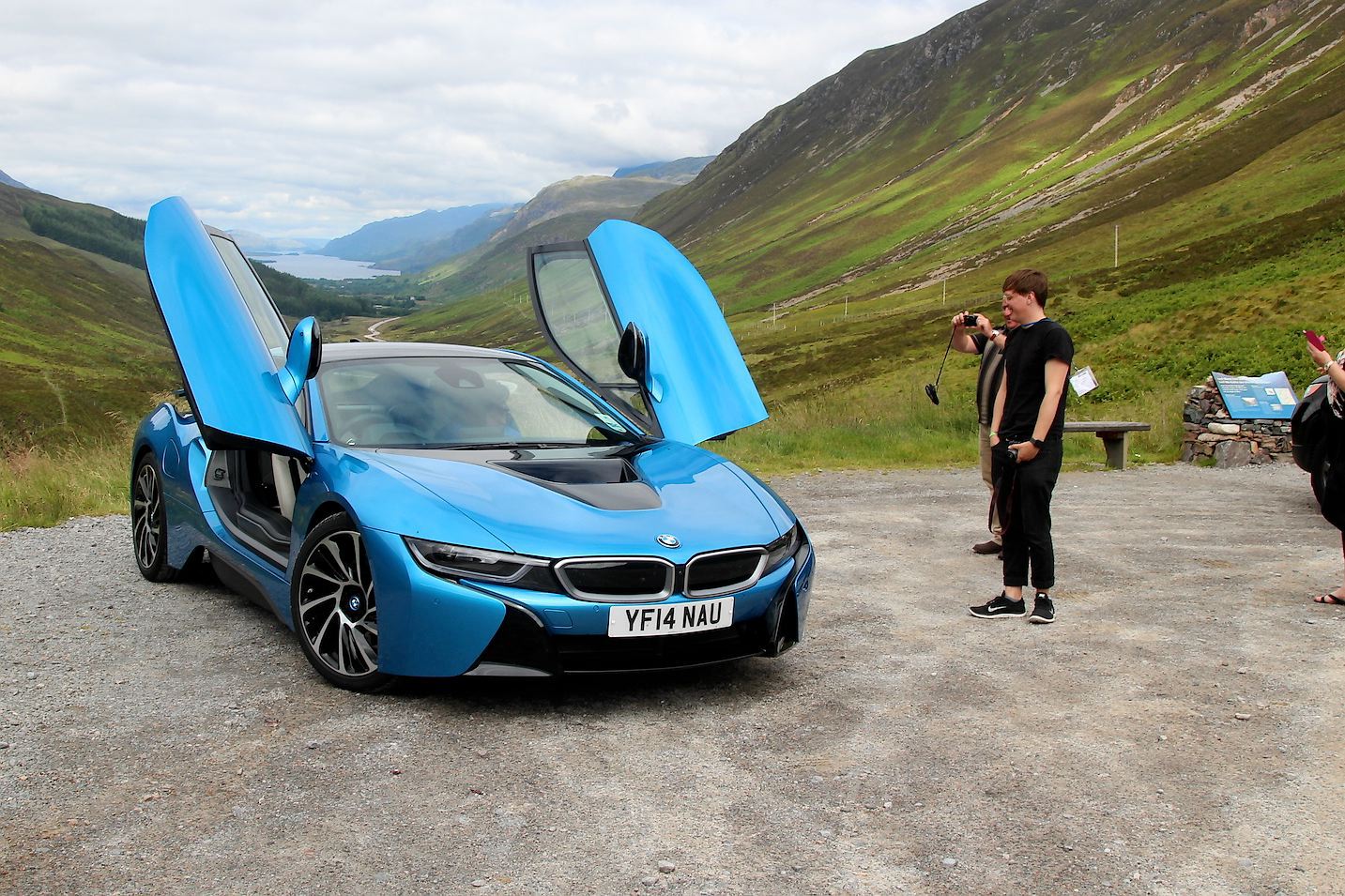 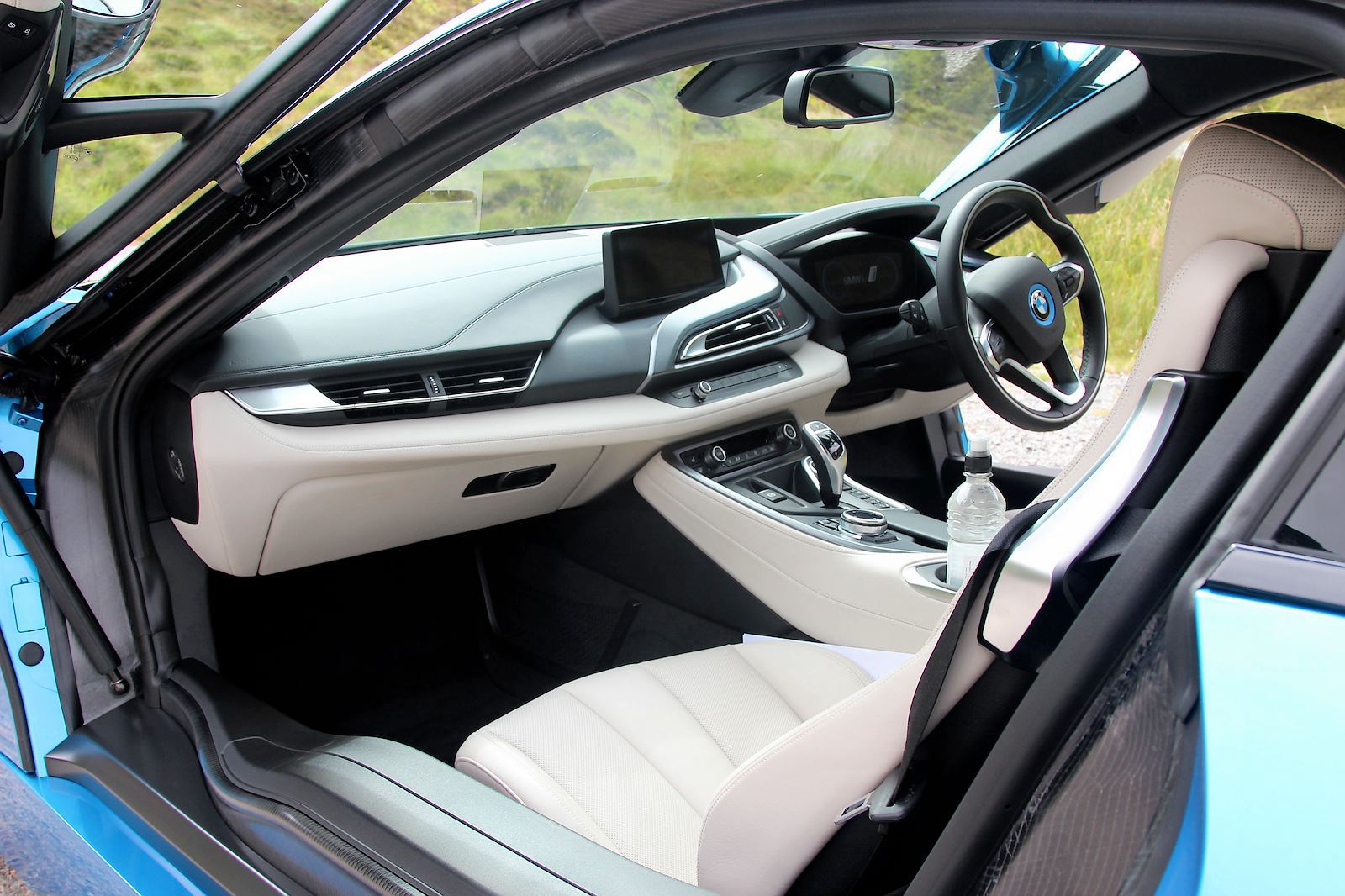 Interior doesn't quite deliver on the exterior's promise 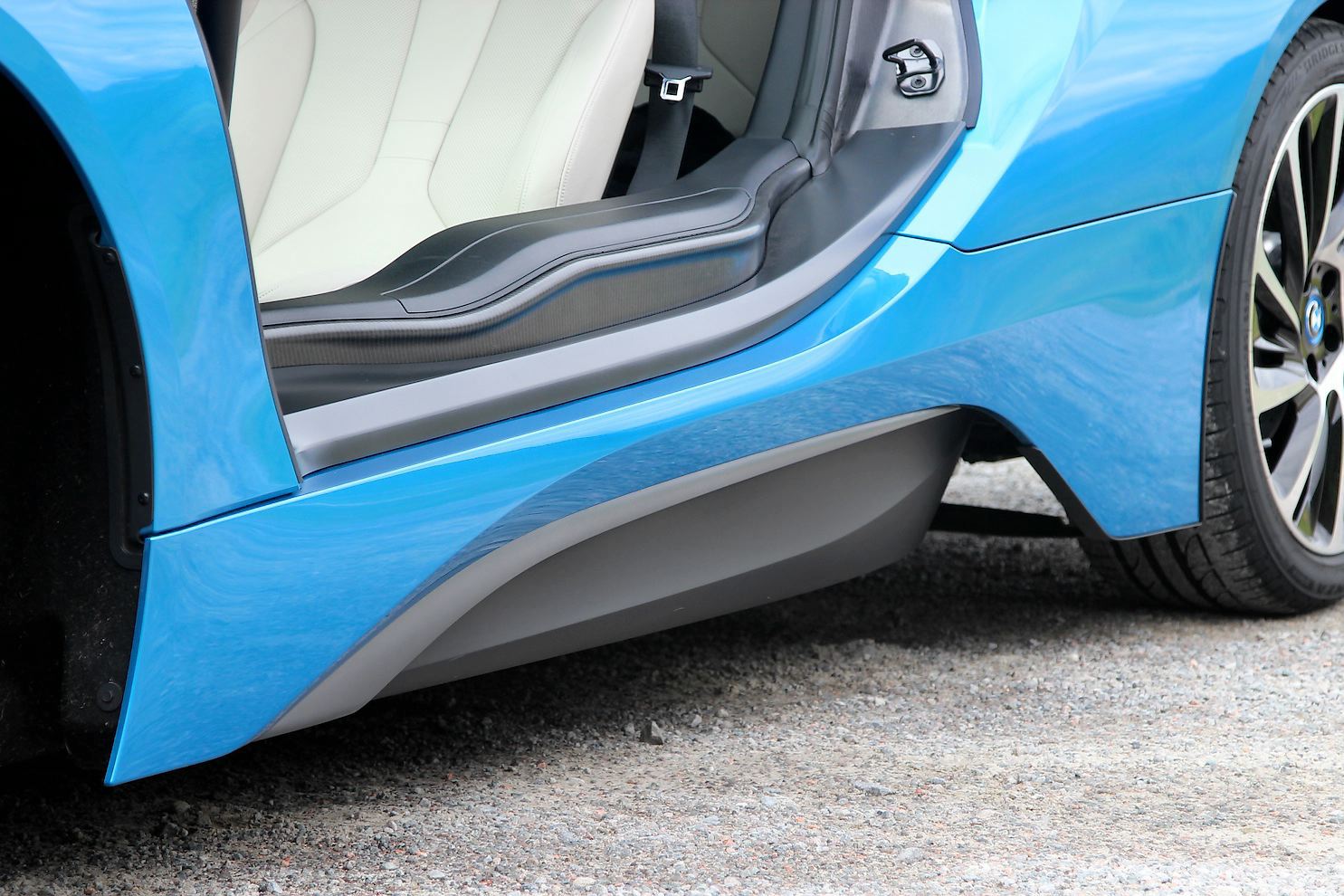 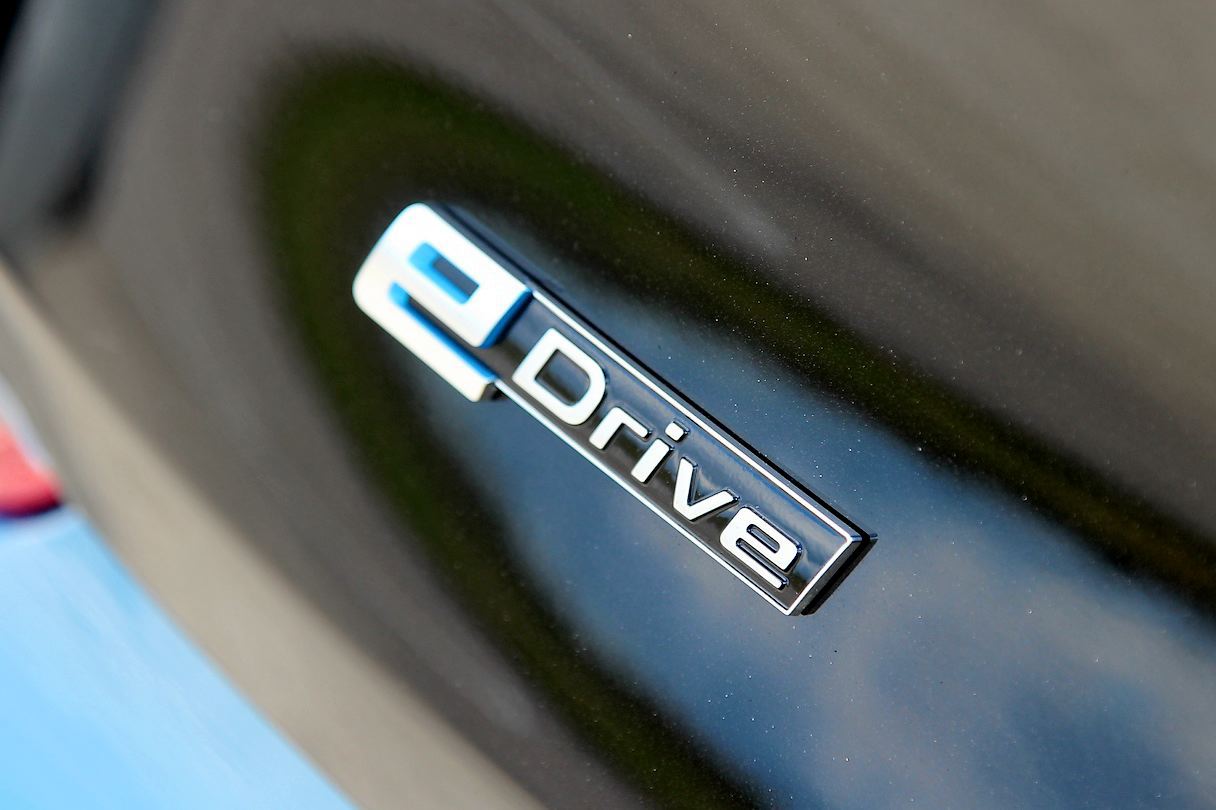 Alt power gets a new aesthetic 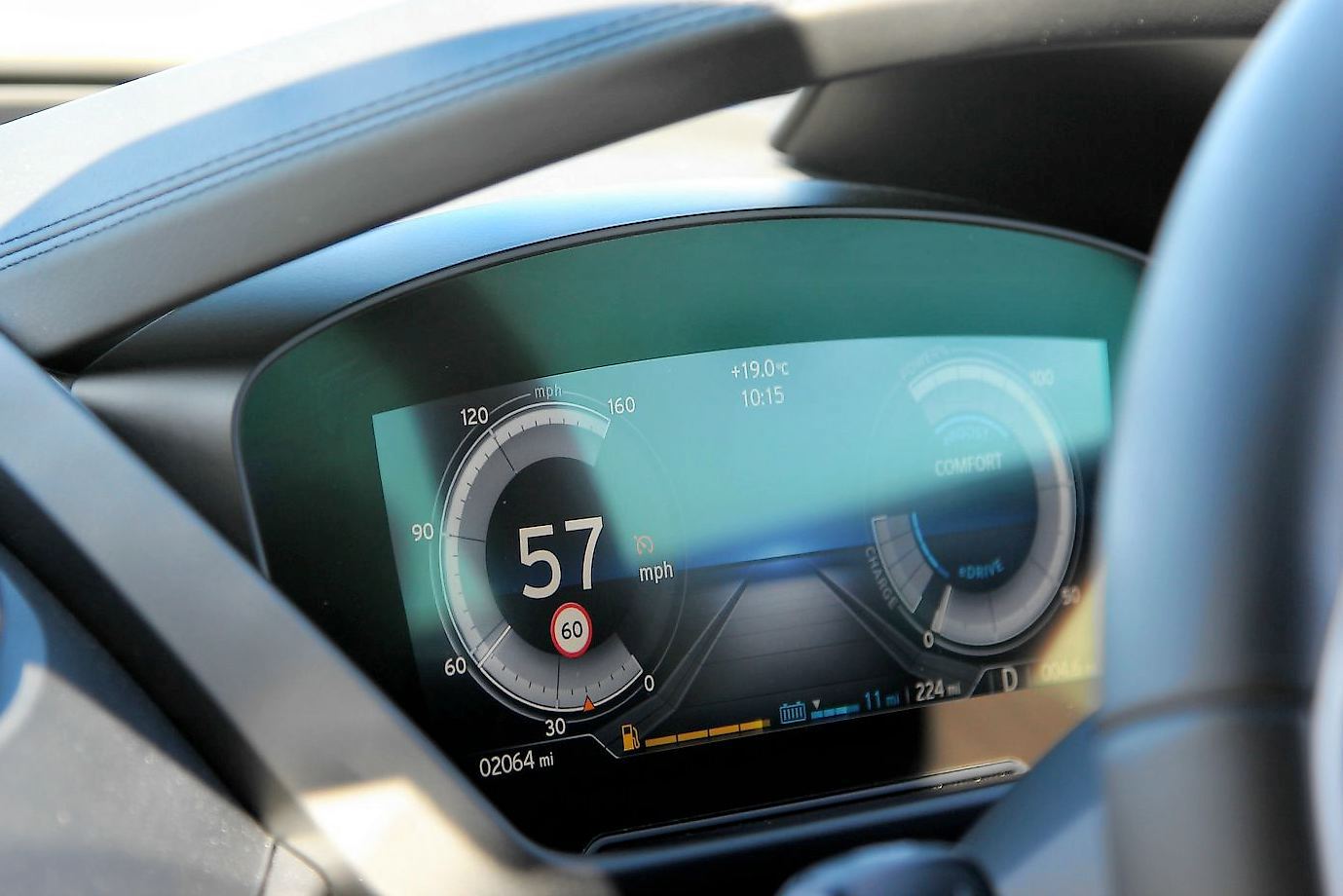 Digital gauges improves on the i3 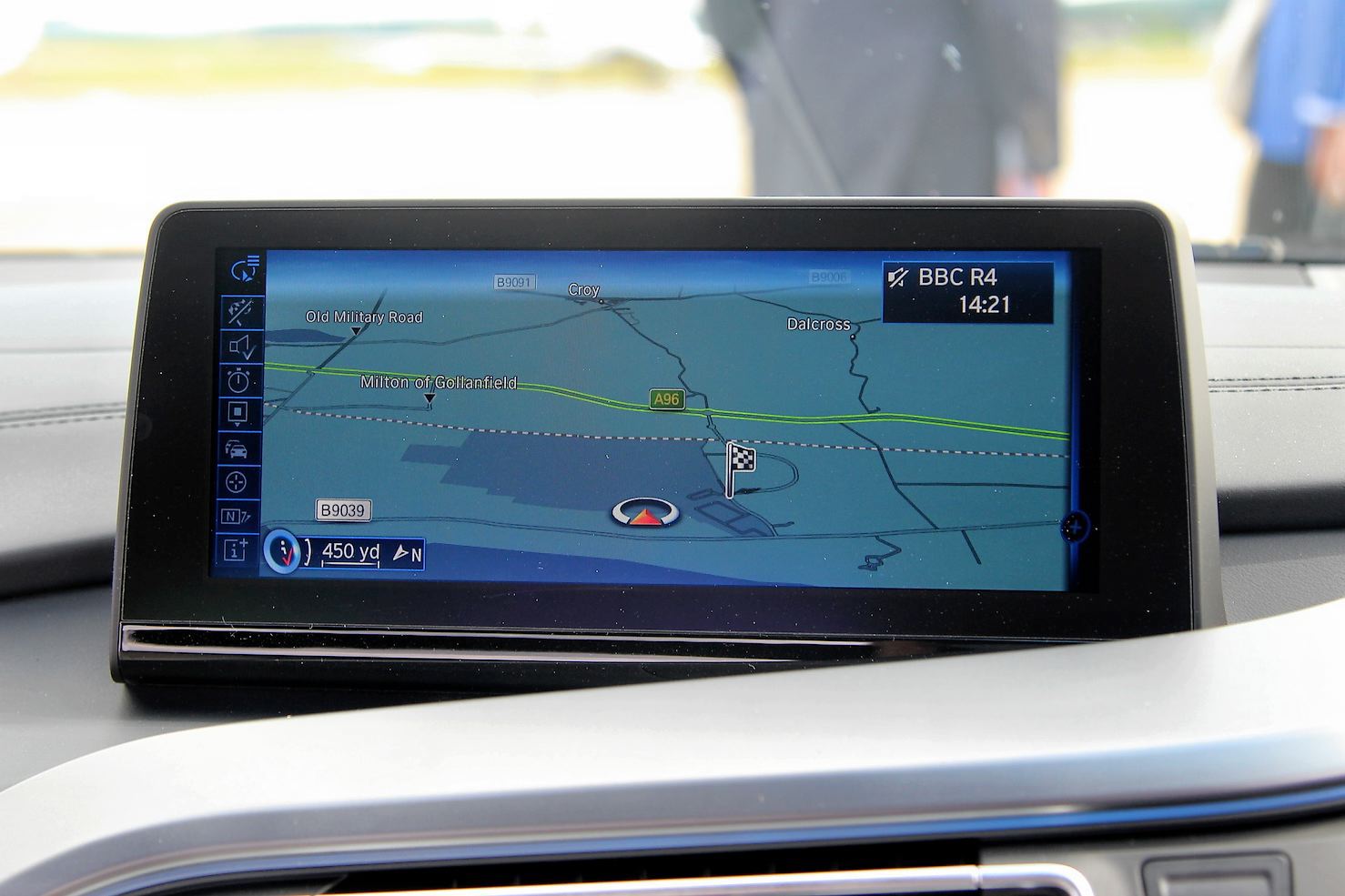 Center screen familiar from other BMWs 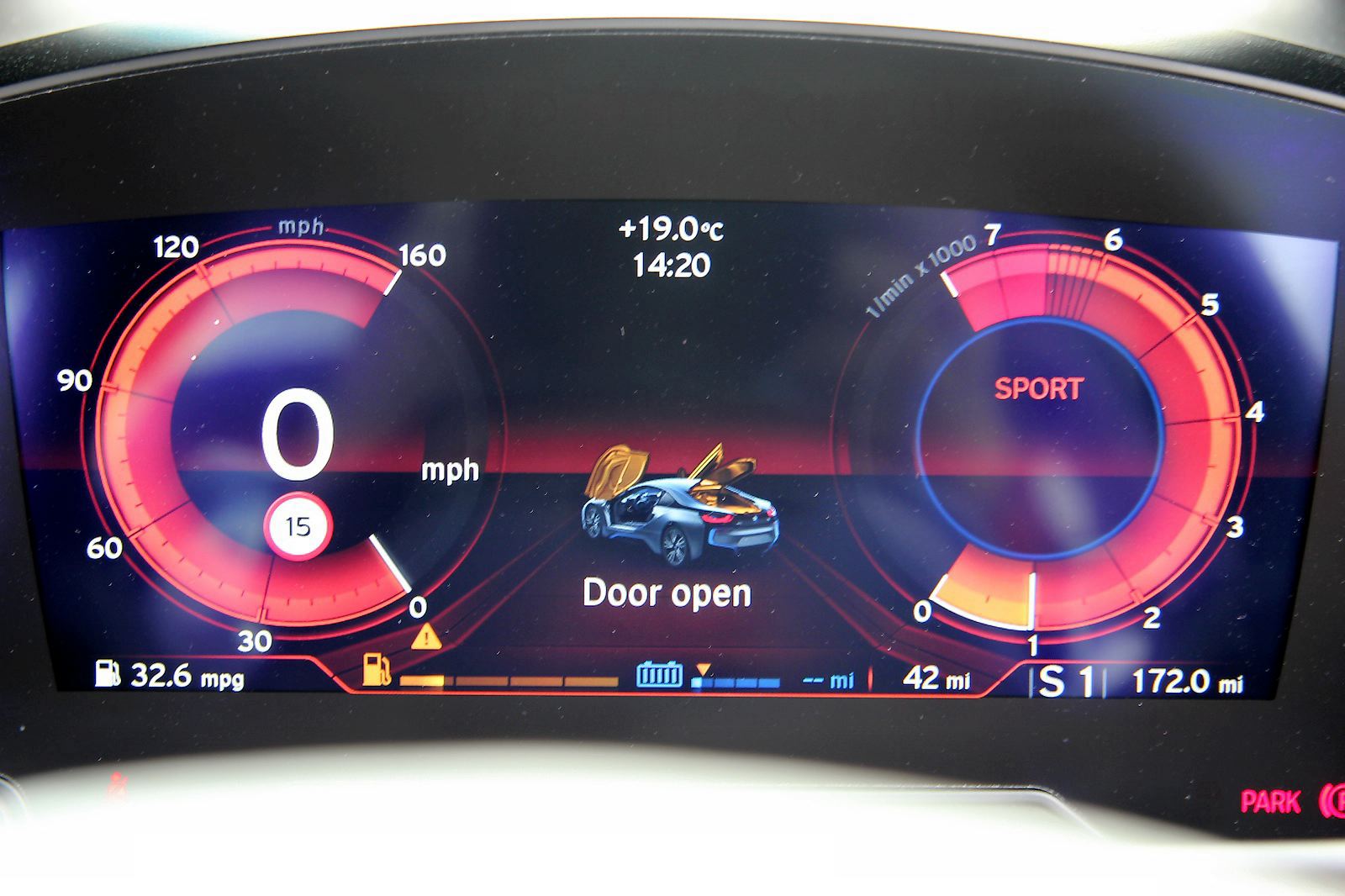 The lightweight dihedral door arcs up and forward to reveal a surprisingly high sill, required to ensure the appropriate stiffness of BMW's aluminum-plus-CFRP LifeDrive structure; Lotus Elise owners will feel at home.

The combination of that sill, an incredibly fast A-pillar and a very low roofline leaves a surprisingly awkward hole through which to post yourself. We found the best way was to scissor step a foot into the footwell, before perching on the sill then sliding down into the seat, giving a an entry and egress process reminiscent of '70s and '80s Lamborghinis.

There's similar levels of potential embarrassment for the wrongly attired or less elastic of limb, too. To drive the future you need to be fit. And ideally wearing trousers.

Sadly, there'll be no Lamborghini-style show-off maneuvering, doors-up, driver perched on sill; the gearbox automatically selects park should you try to move off with either door ajar.

The interior space feels unique; the A-pillar's speed and tumblehome makes the glasshouse feel tight, yet the crown of the roof gives plenty of headroom even for tall drivers. The doors lack pockets, yet the rear seats could be used by small children - something only the Porsche 911 offers, and a point of practical difference that gives the car added left-brain appeal.

That said, the interior design doesn't quite live up to the exterior's promise. The layered, flowing theme continues but in a token manner - there are disappointing, large swathes of plastic simply covered in leather and a number of generic BMW parts that don't quite fit the exotic, futuristic billing. Better to take in the i8 at night, where the (optional) LED strips highlight the nature of the interior's volumes and give the space a much more digital feel.

The twin digital displays may lack the drama of Tesla's 17-inch touchscreen, but here BMW remains true to its roots - the latest iDrive controller and ConnectedDrive suite of functions are far more intuitive to use and faster to respond than any touchscreen. It feels initially odd to be twirling knobs from a 3 Series in a $135,000 flagship, but so ergonomically resolved is BMW's switchgear these days, that it's hard to argue with.

Where the i8 steps beyond other BMWs is with its fully digital gauge cluster, which reconfigures dependent on which of the three primary modes - E-mode, Comfort or Sport - the car is being driven in. Working in conjunction with the standard head-up display, it's much easier to read than the gauges in the i3. However, it's occasionally hard to discern the battery's state of charge or the just how much tolerance the system has before drawing on the petrol engine in what is, ultimately a plug-in hybrid.

Disappointments? The cluster screen doesn't wrap to the edge of the binnacle - and thus looks less modern than the unit in the new Audi TT. The option of something other than a digital approximation of what are essentially still analog dials would be welcome, too. As it is, the technology looks to the future but the display graphics occasionally feel like they have a foot in the past.

Nonetheless, the technology contributes to the theater of the drive. Charging along the right road three-cylinder turbo behind you; electric motor whining up-front - the rev-counter glows with increasing red-ness as engine speeds rise. This is joined by a glowing blue inner ring, as the electric motor ‘e-boosts' its extra power; the i8 feels more fun to drive because of the technology, not in spite of it.

The i8 is the performance car redefined, but the fact it can mix it in the fun-to-drive stakes with the Porsche 911 and Audi R8 misses the point. BMW has created a car pushing the envelope of design, technology and construction methods and materials. Its message is about looking to an exciting future, rather than back at the glory days of motor sport through rose-tinted glasses.

Perhaps most important is the halo of technology-smart progression it will cast across the rest of the BMW range. It puts the firm's rivals distinctly on the back foot and that might be the i8's greatest achievement of all.