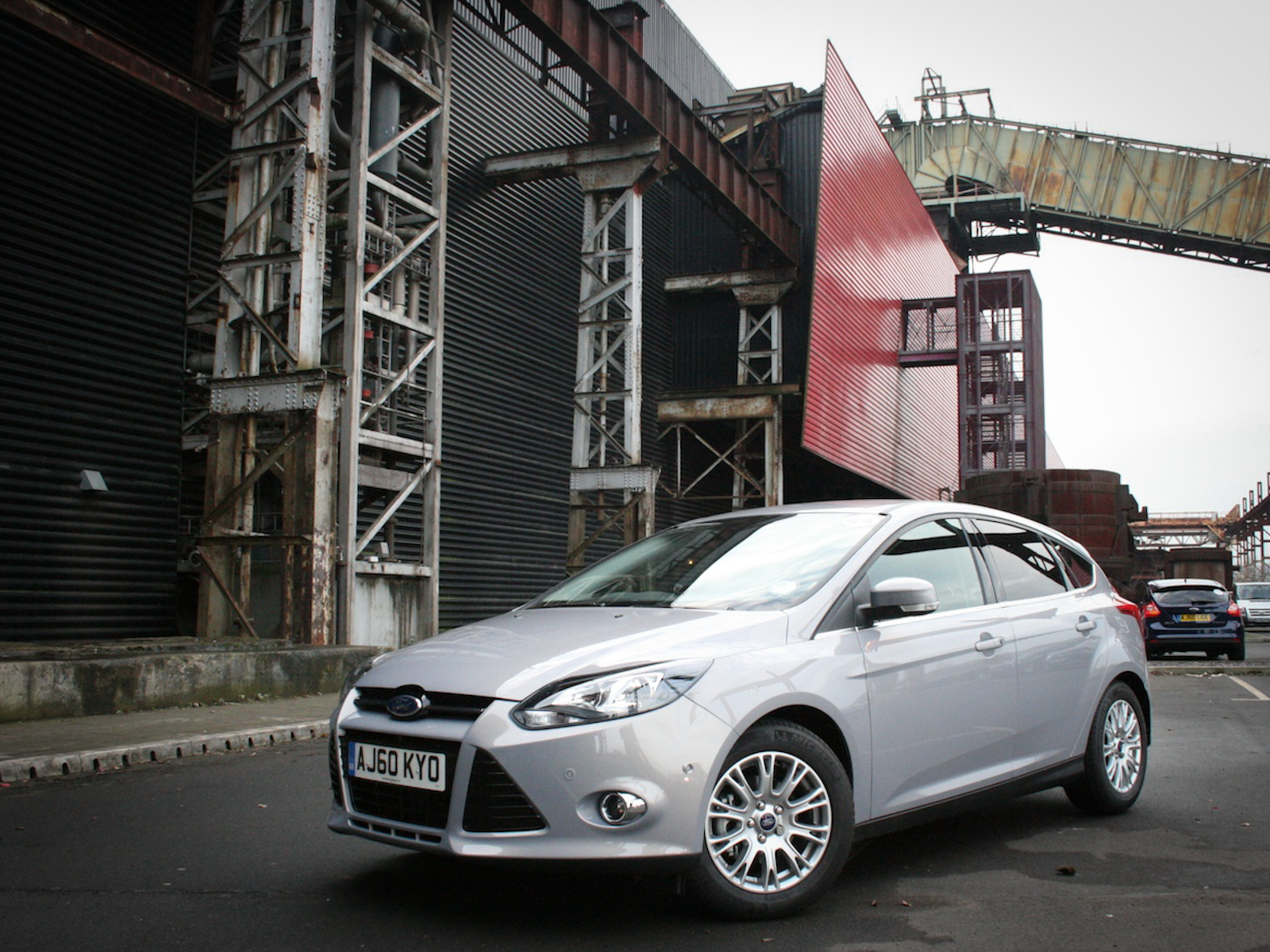 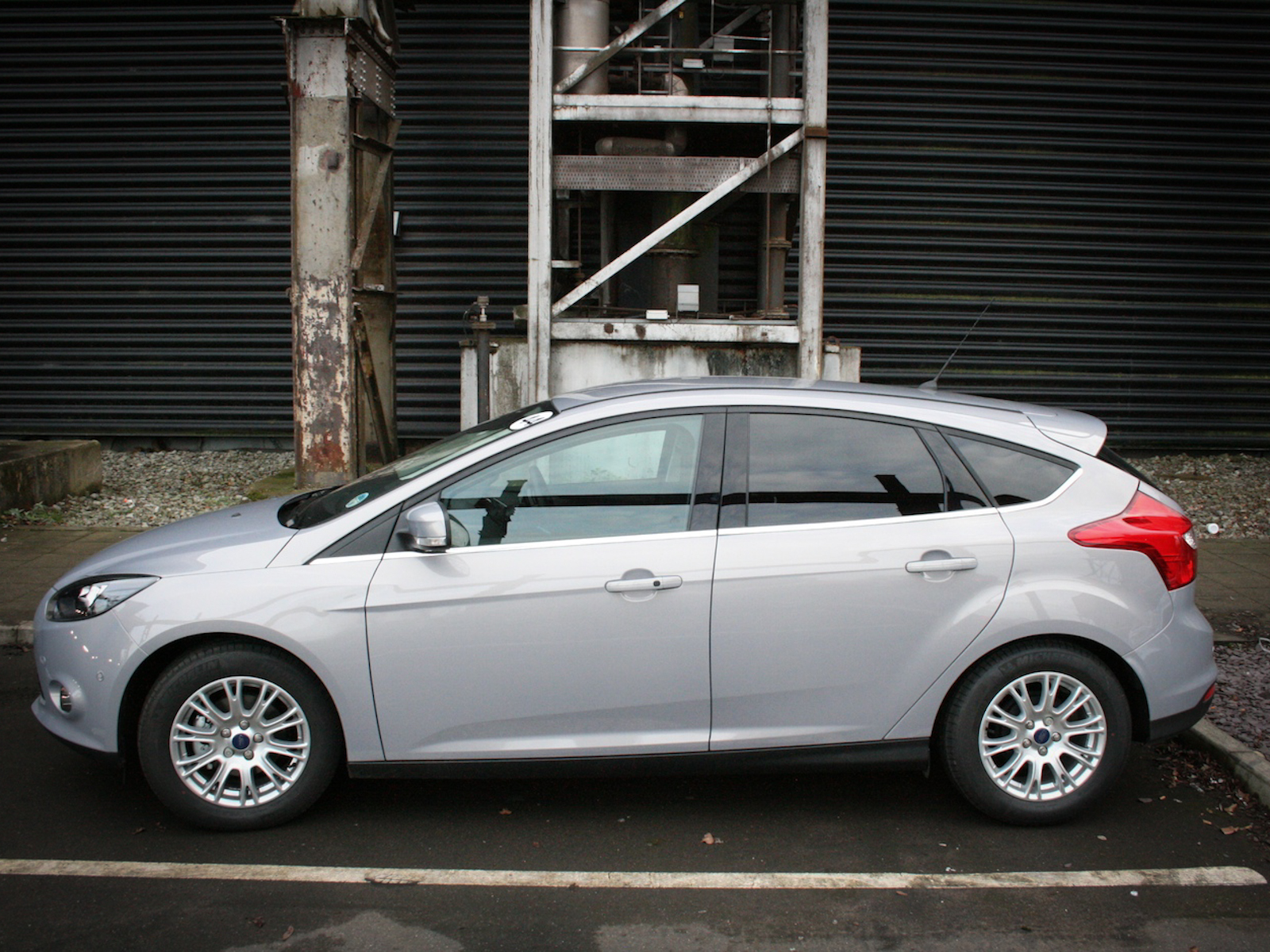 New Focus does away with the plain, simple langauge of the Mk II car which many criticized for being dull 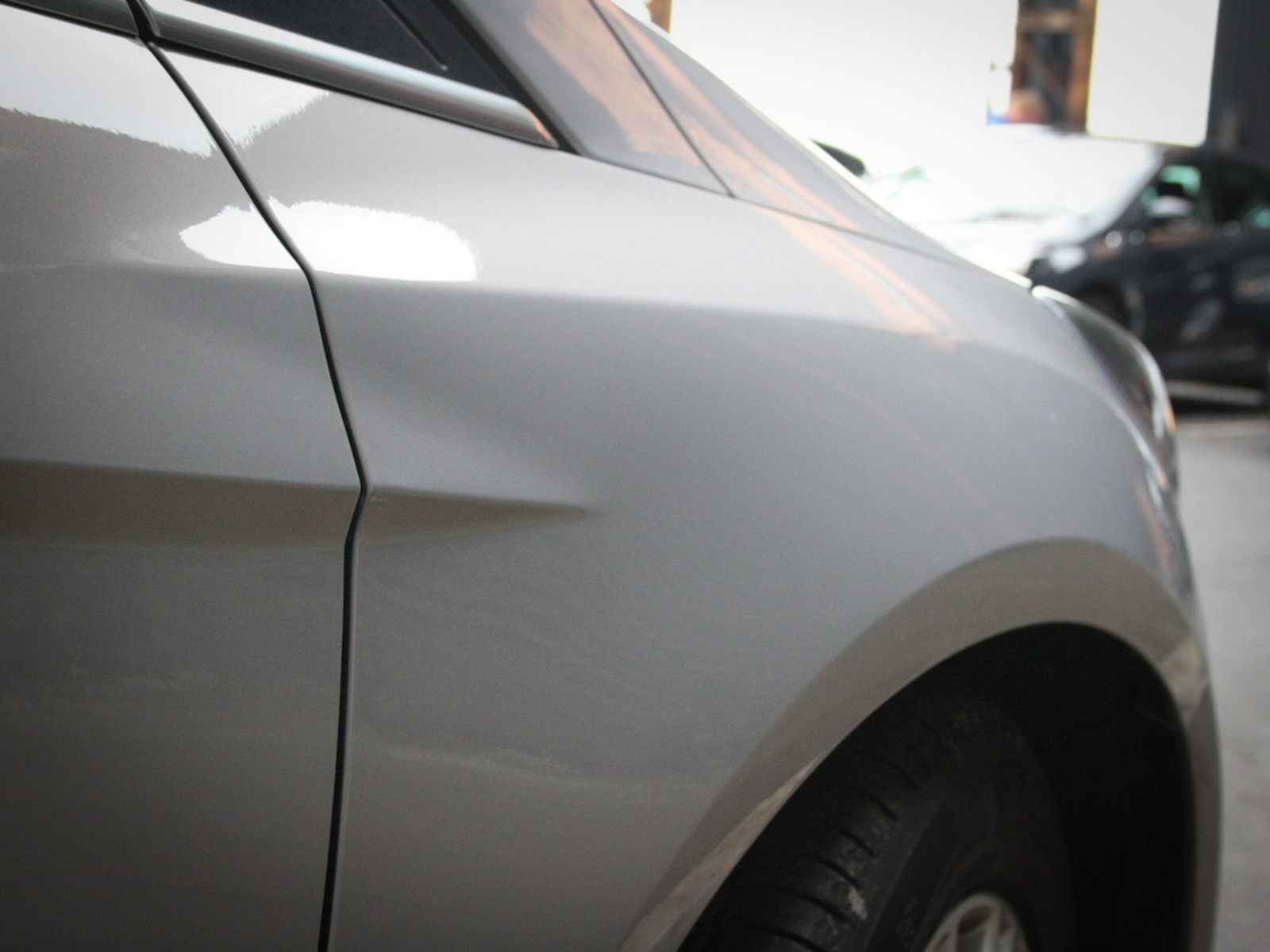 Intersecting bone lines are a major design feature of the new Focus, intersection point creates a 'Z' surface, which the design team apparently refer to as the 'Zorro flip' 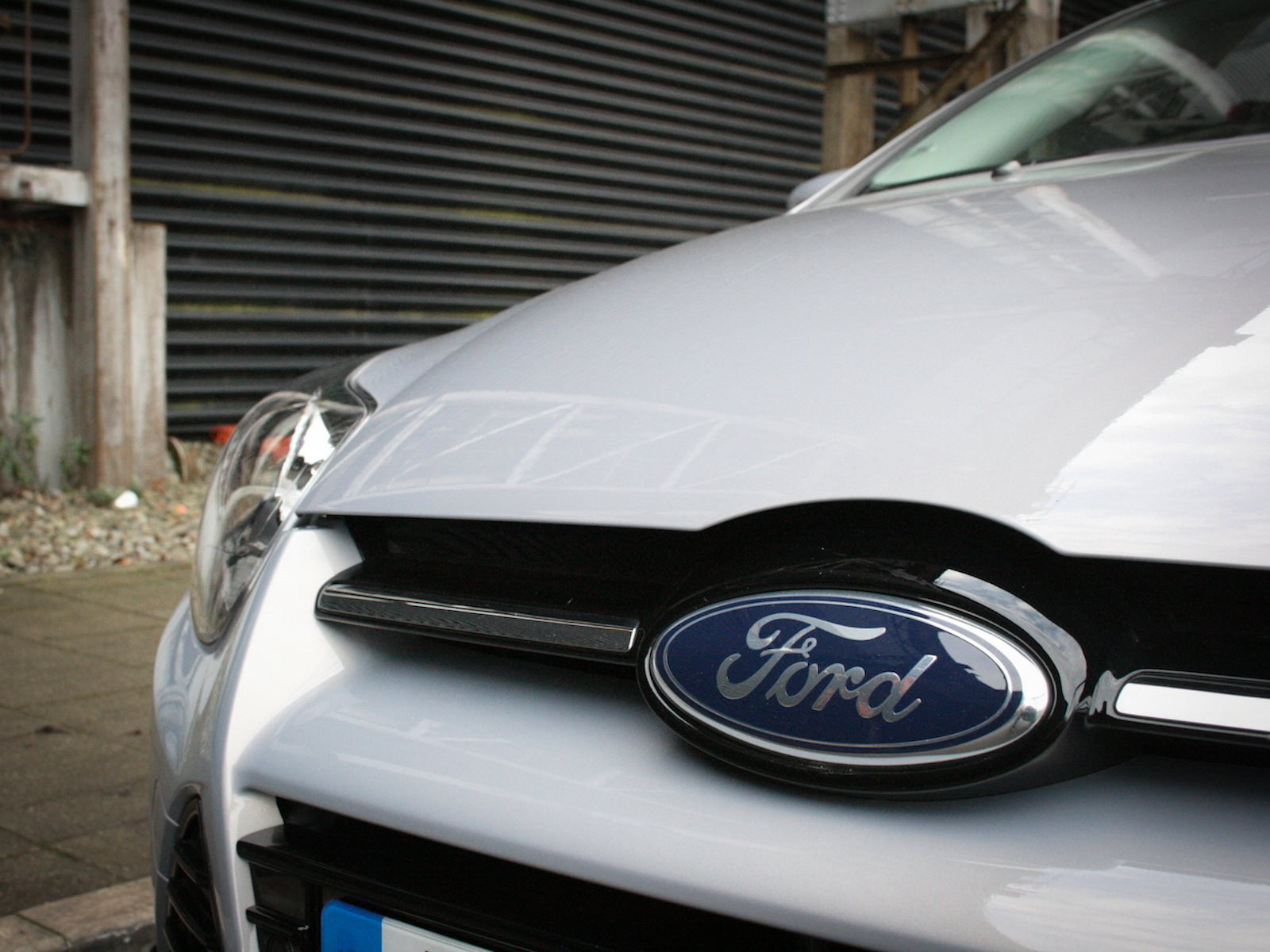 Resolution of hood's leading edge over the Ford badge and grille contrives to make the Focus appear as if its hood is sitting proud, as though it hasn't been shut properly 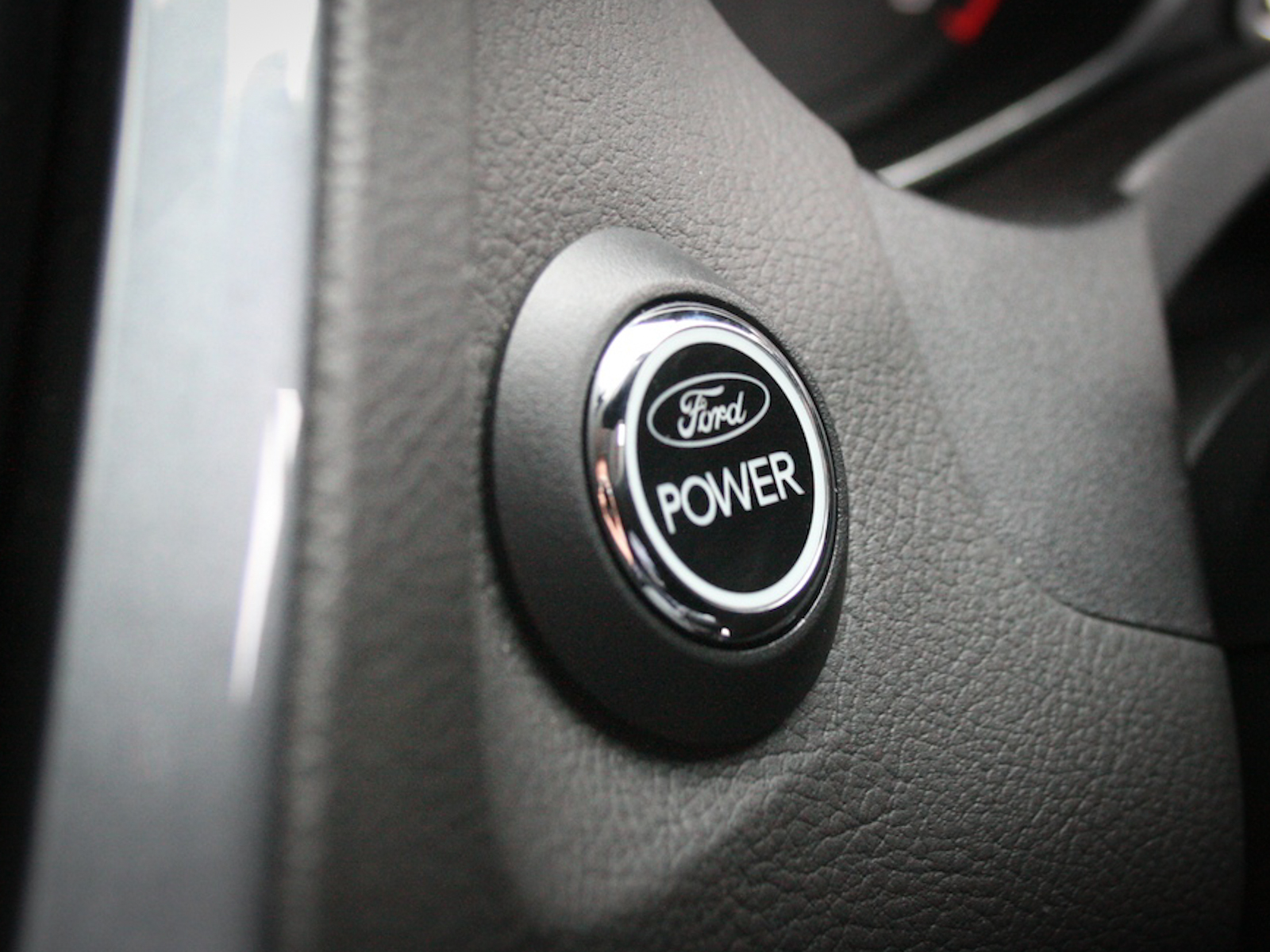 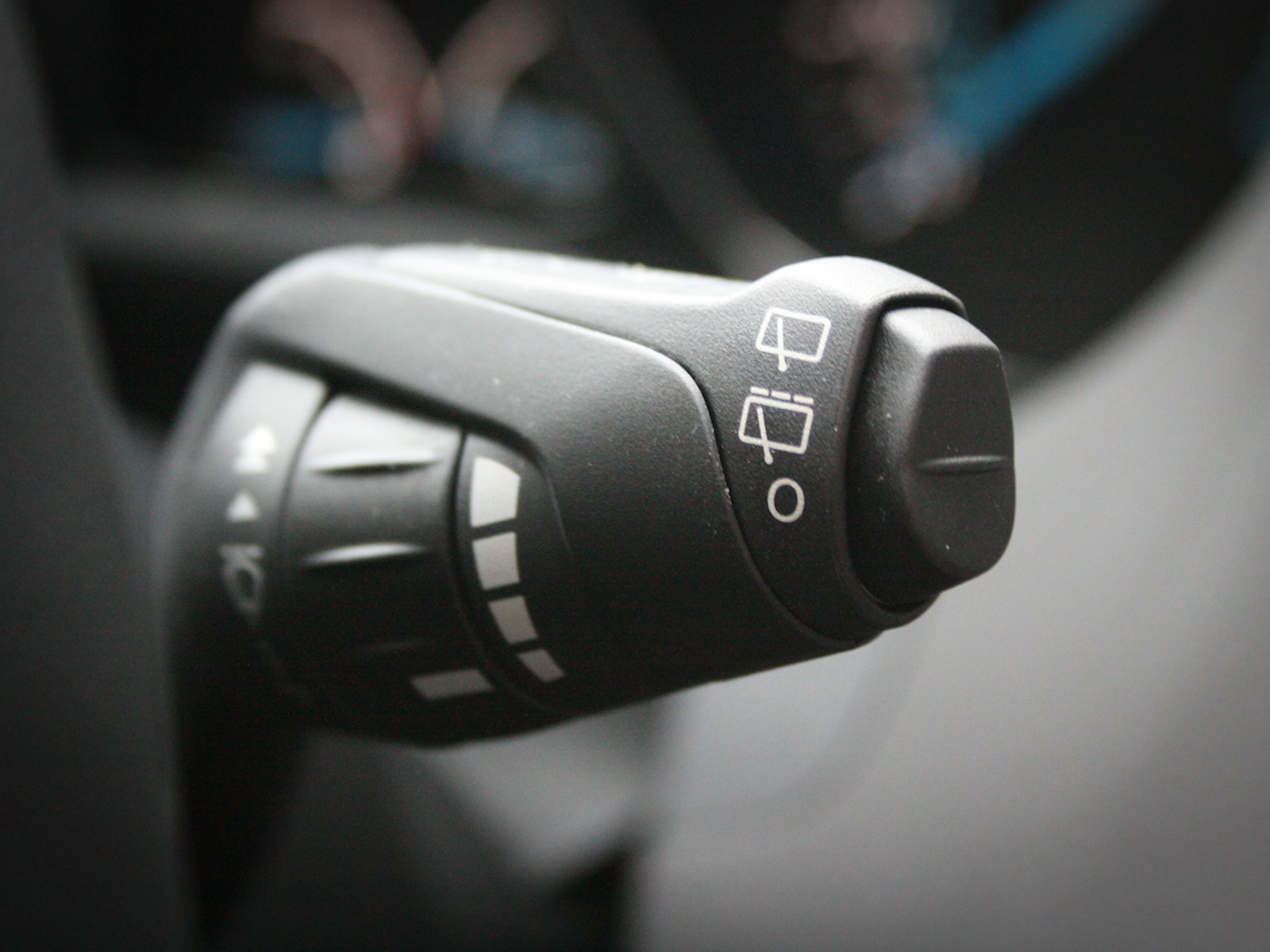 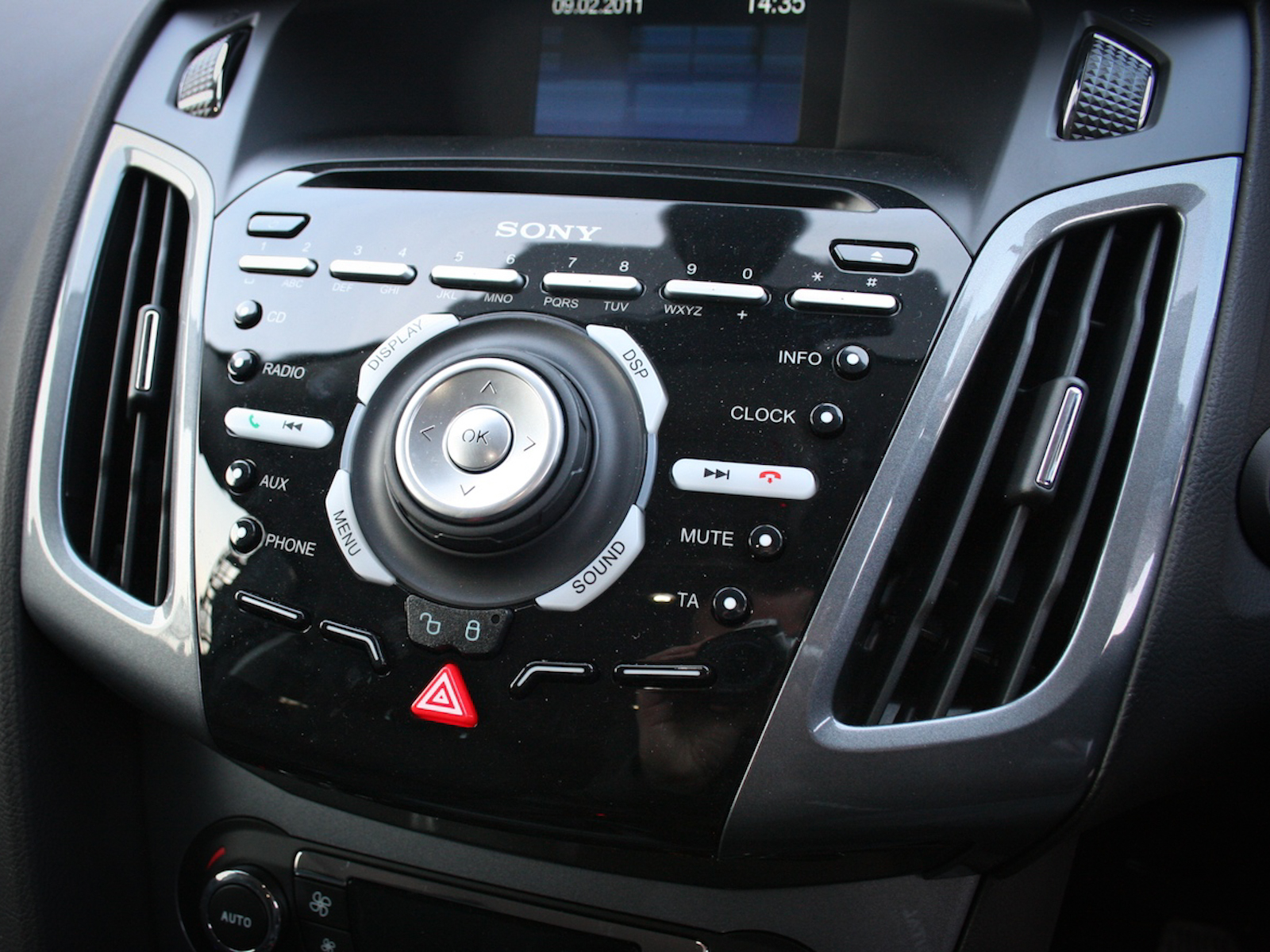 Piano black finish on the Sony audio system. Note the small hazard switch below the main control knob. When operating the knob, the lower edge of your palm falls onto this, operating it inadvertantly 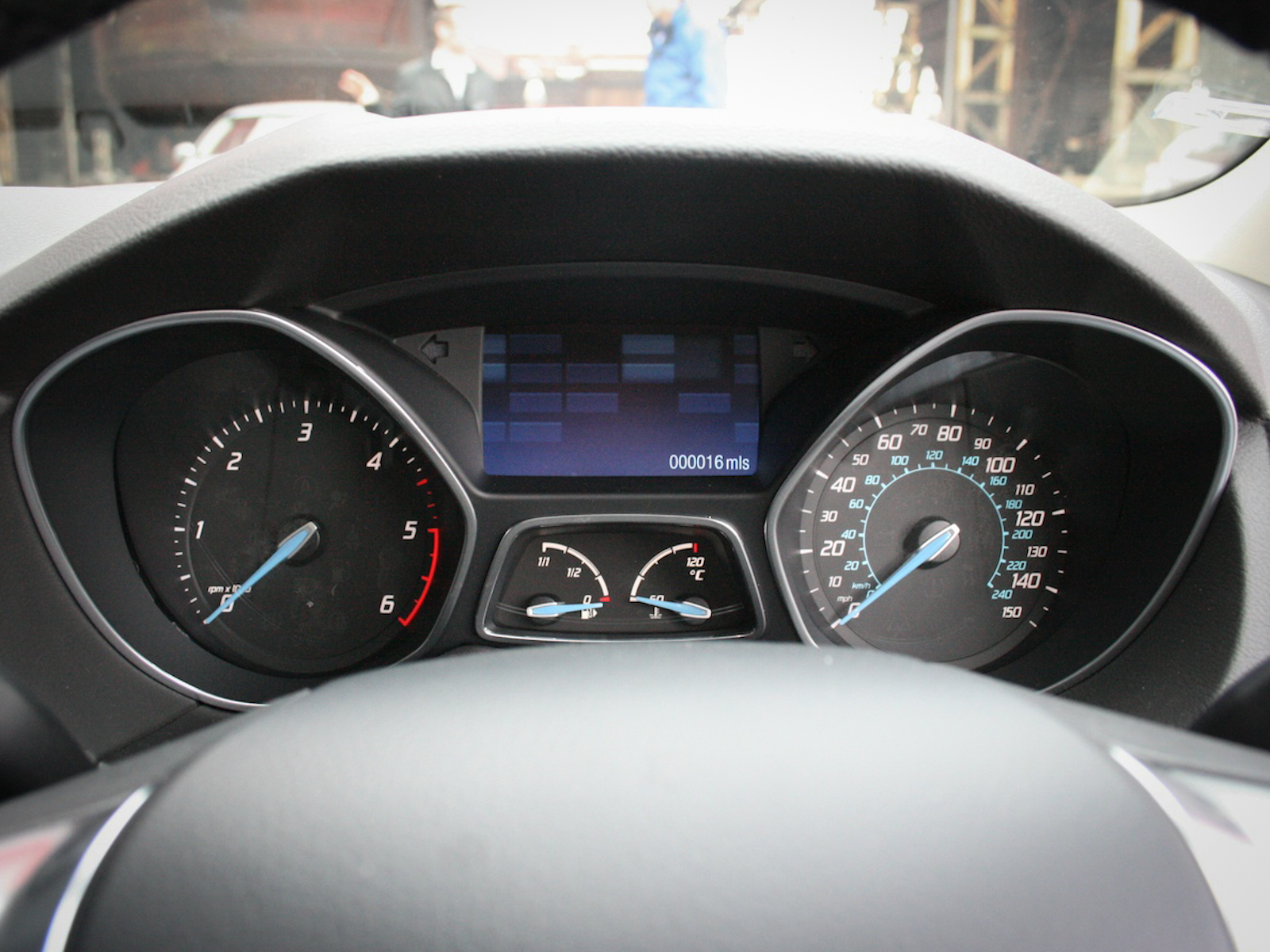 Gauge pack has a degree of similarity to the Fiesta's, which was inspired by ski goggles

The previous two generations of the Ford Focus have consistently been near the top of the European best sellers list over their combined 13-year life spans, but this new car has even greater responsibility. This is the first Focus designed - from the outset - for European, American and Asian markets combined.

The biggest, most pertinent question is whether the global 'One Ford' strategy this car has been designed under can work in practice. Ford has been here before with the first generation Focus and Mondeo (Contour) but later abandoned it. It's a strategy completely at odds with that of VW, which recently unveiled a version of the Passat specifically designed for the North American market. So we grabbed one of the first cars to land in the UK to see how well the Focus stands up in one of its core European markets. 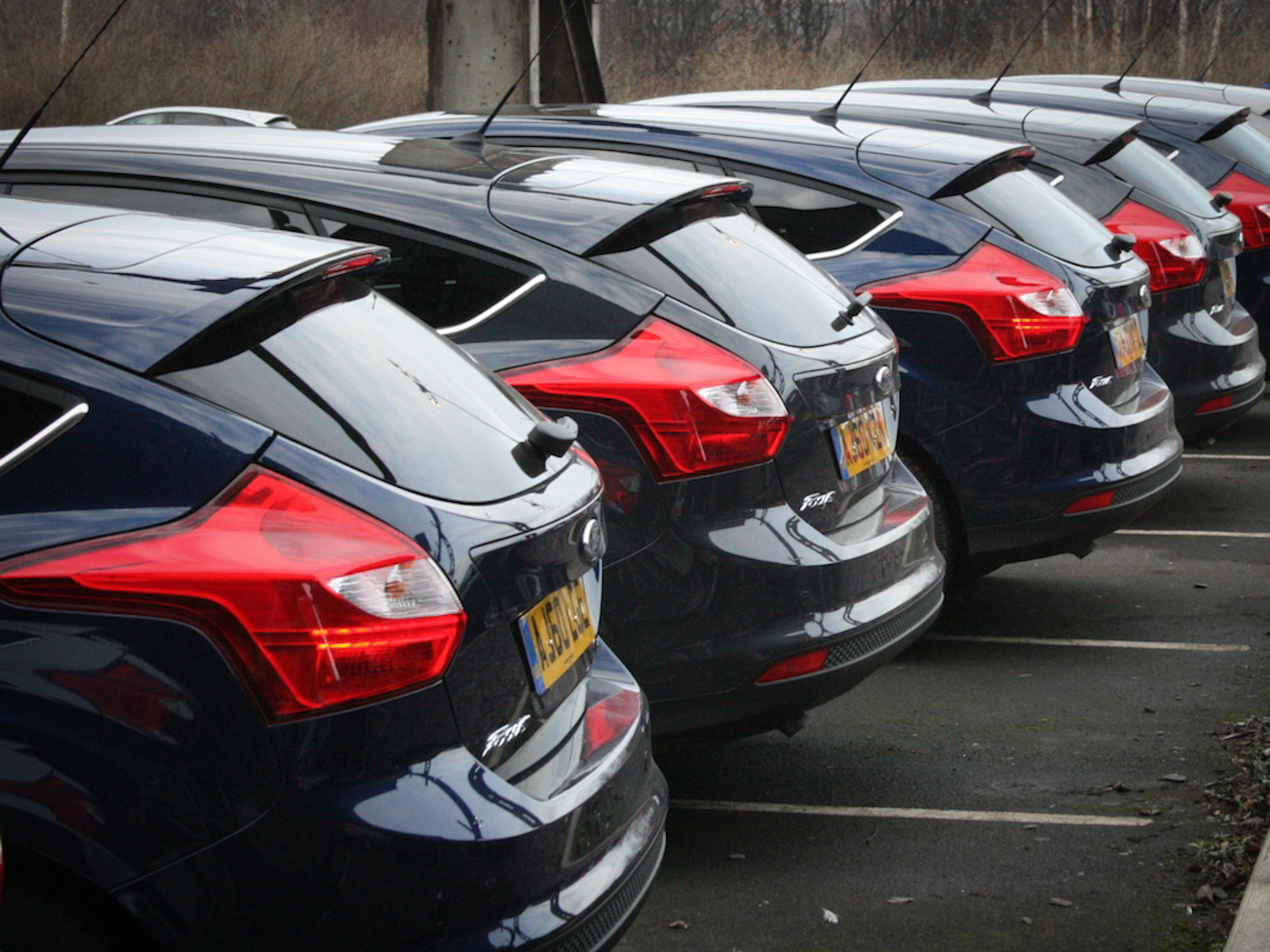 Rear angle of the Focus is one of the most controversial 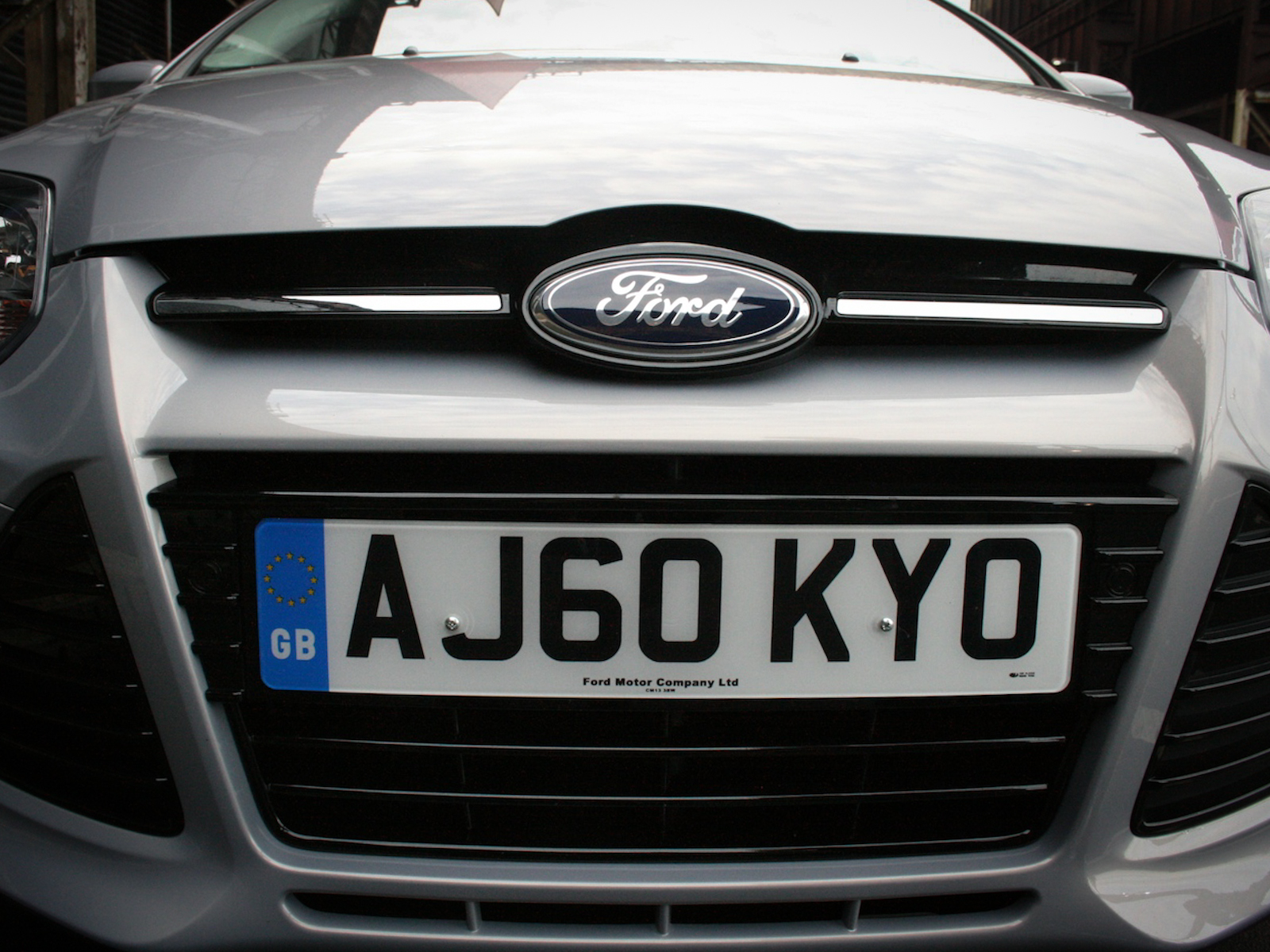 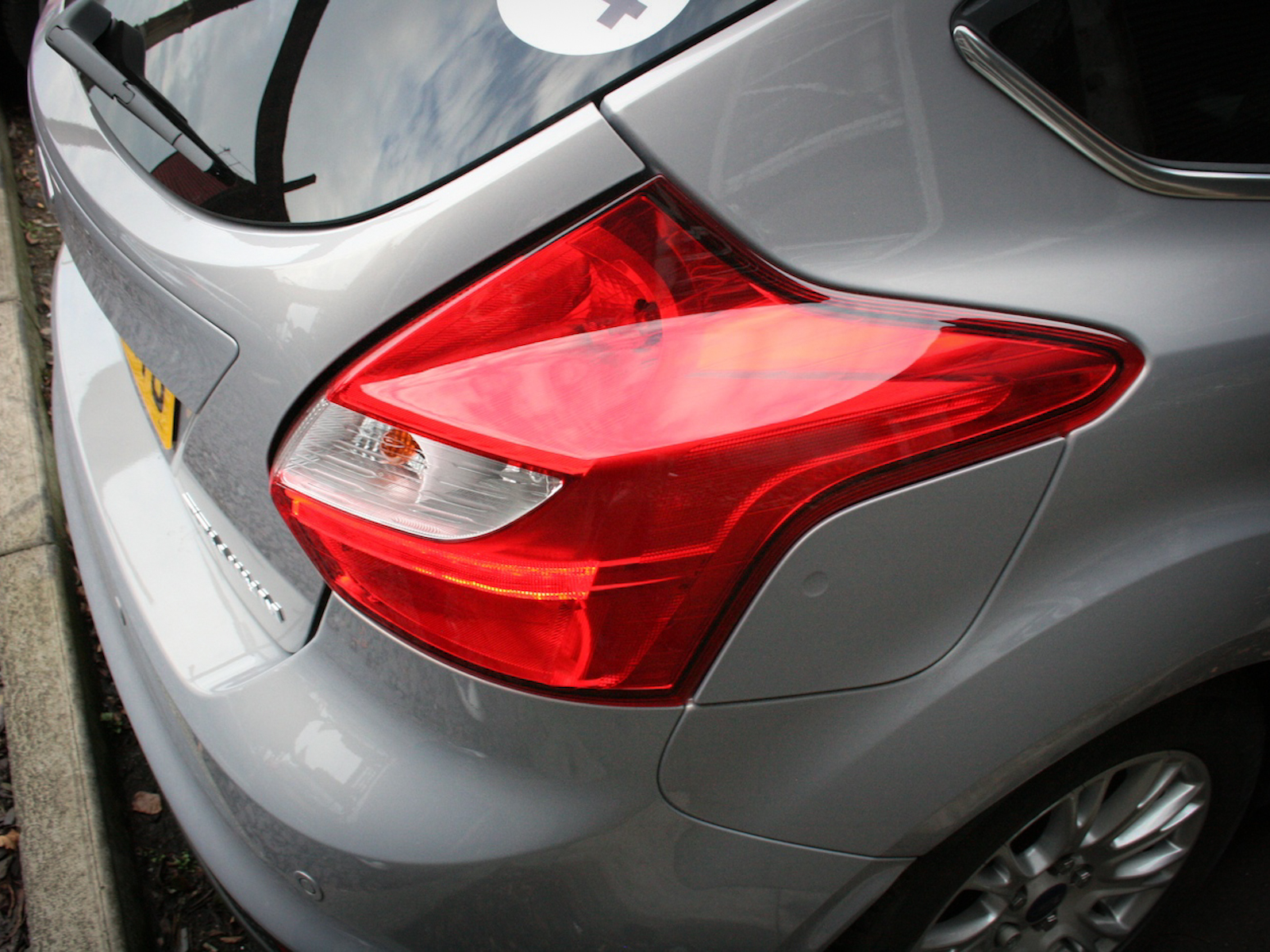 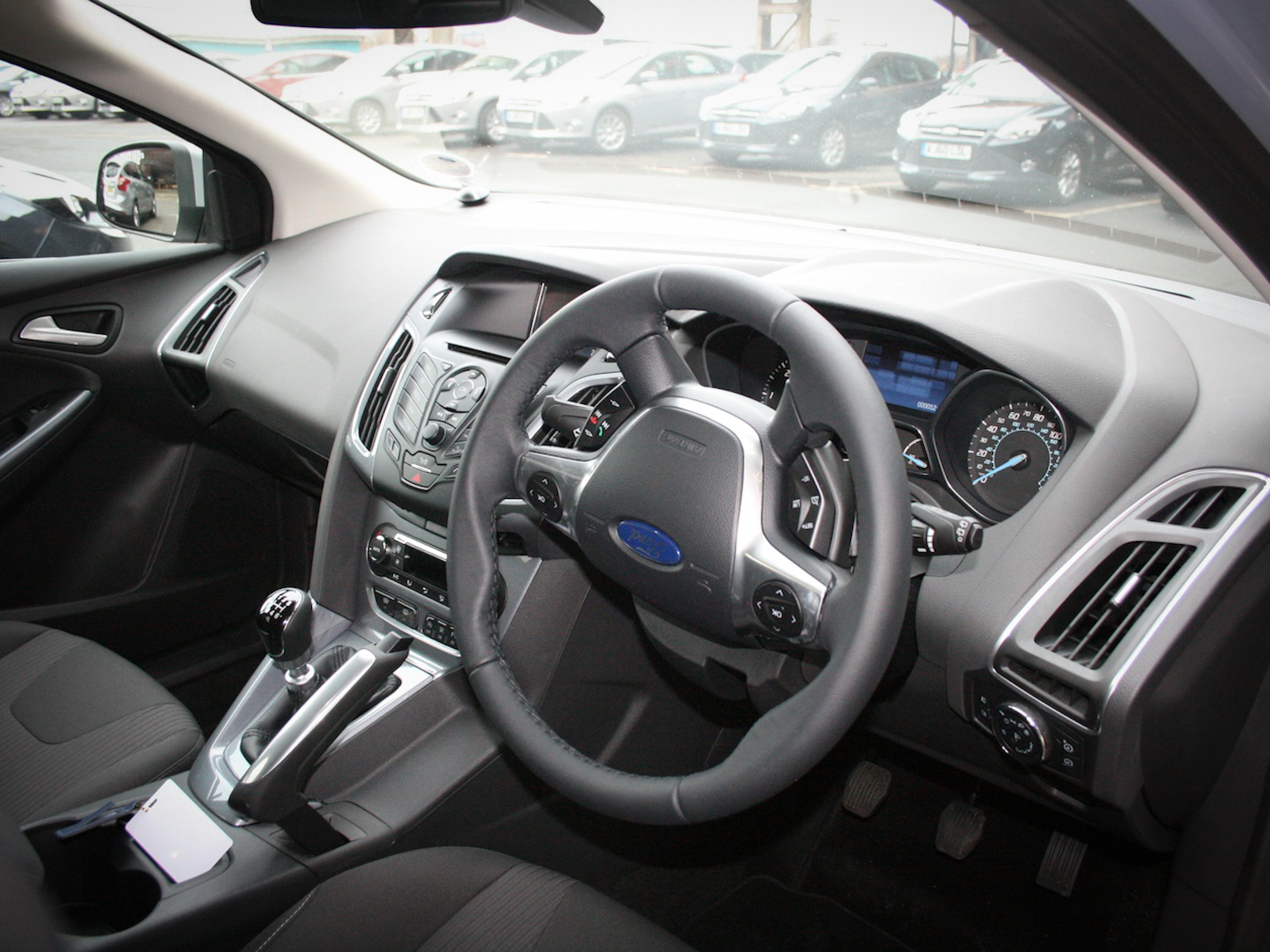 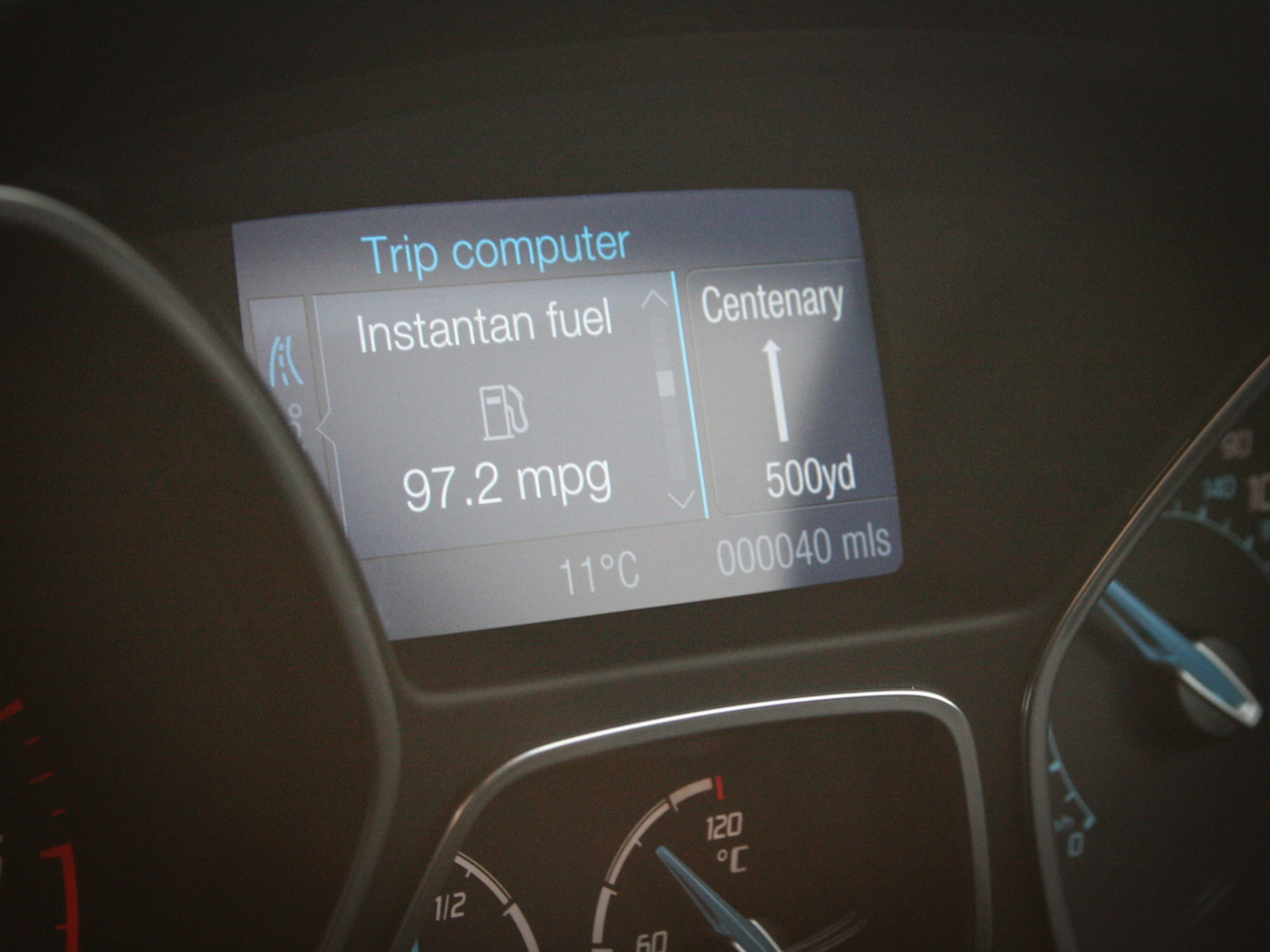 Center screen chops off words; is indicative of some questionable attention to detail 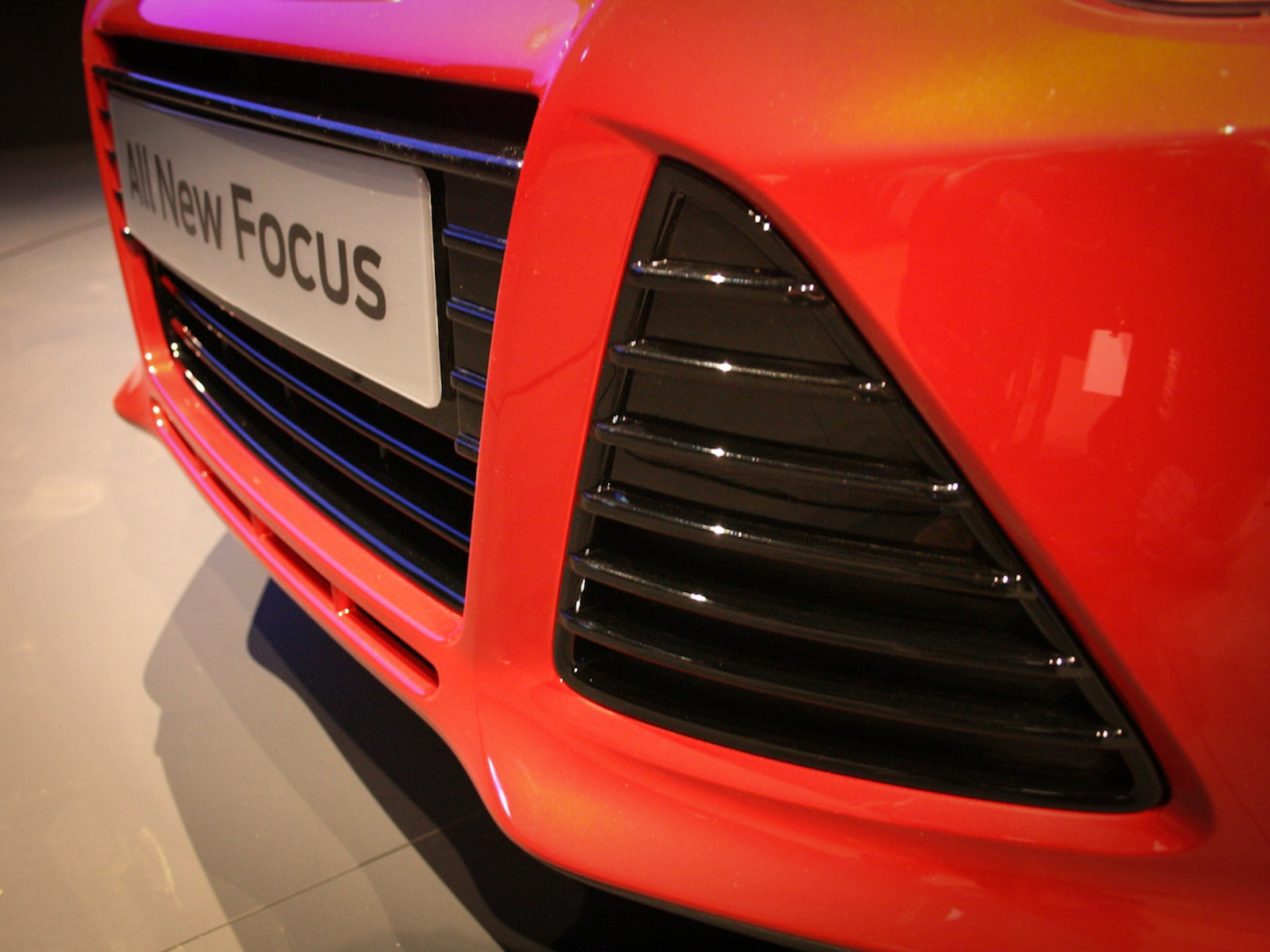 Blanked triangular elements of the lower grille much criticized. Not noticeable from a distance, but up close and particularly against certain colors, they bring a level of cheapness to the Focus's front fascia 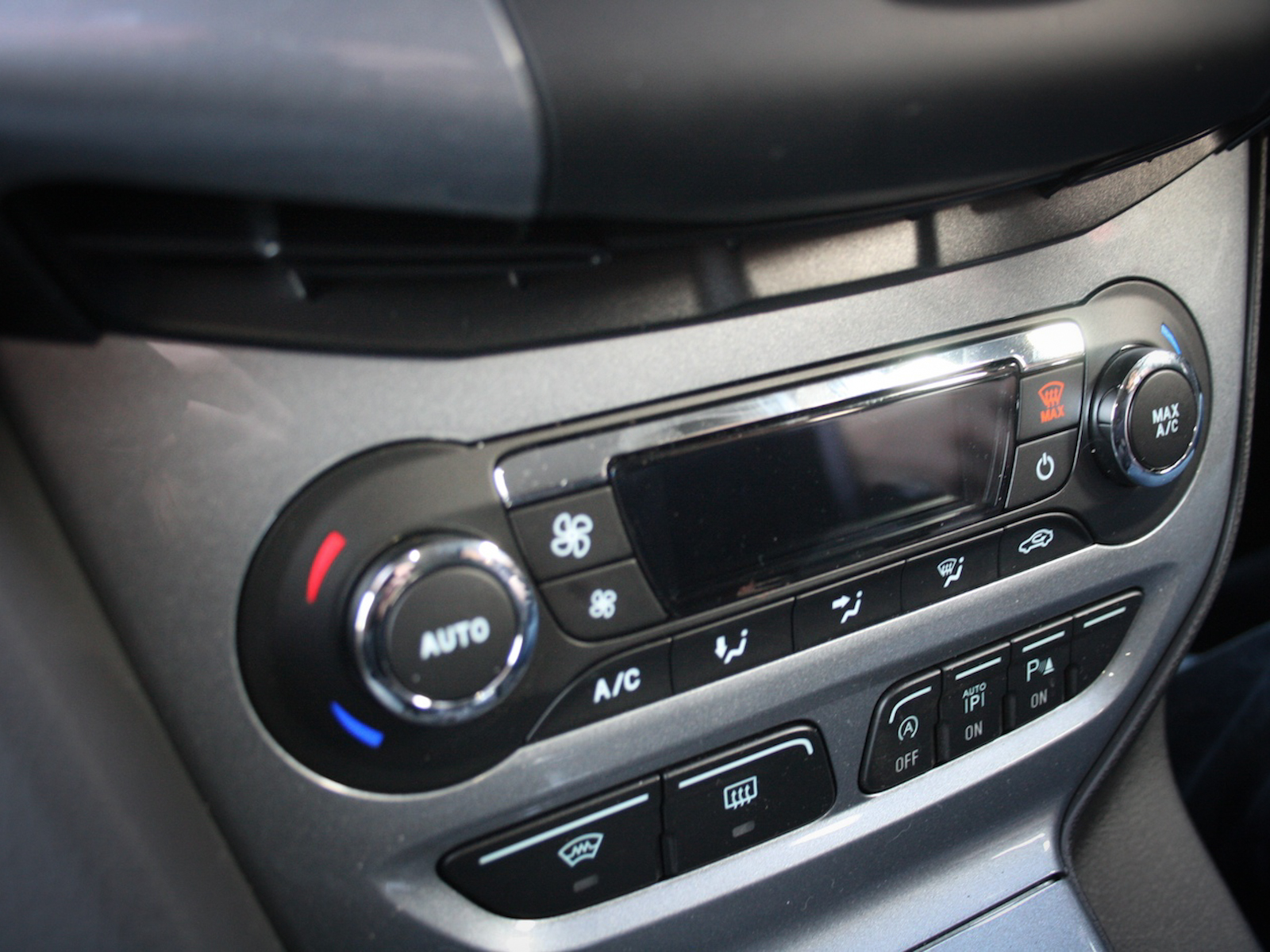 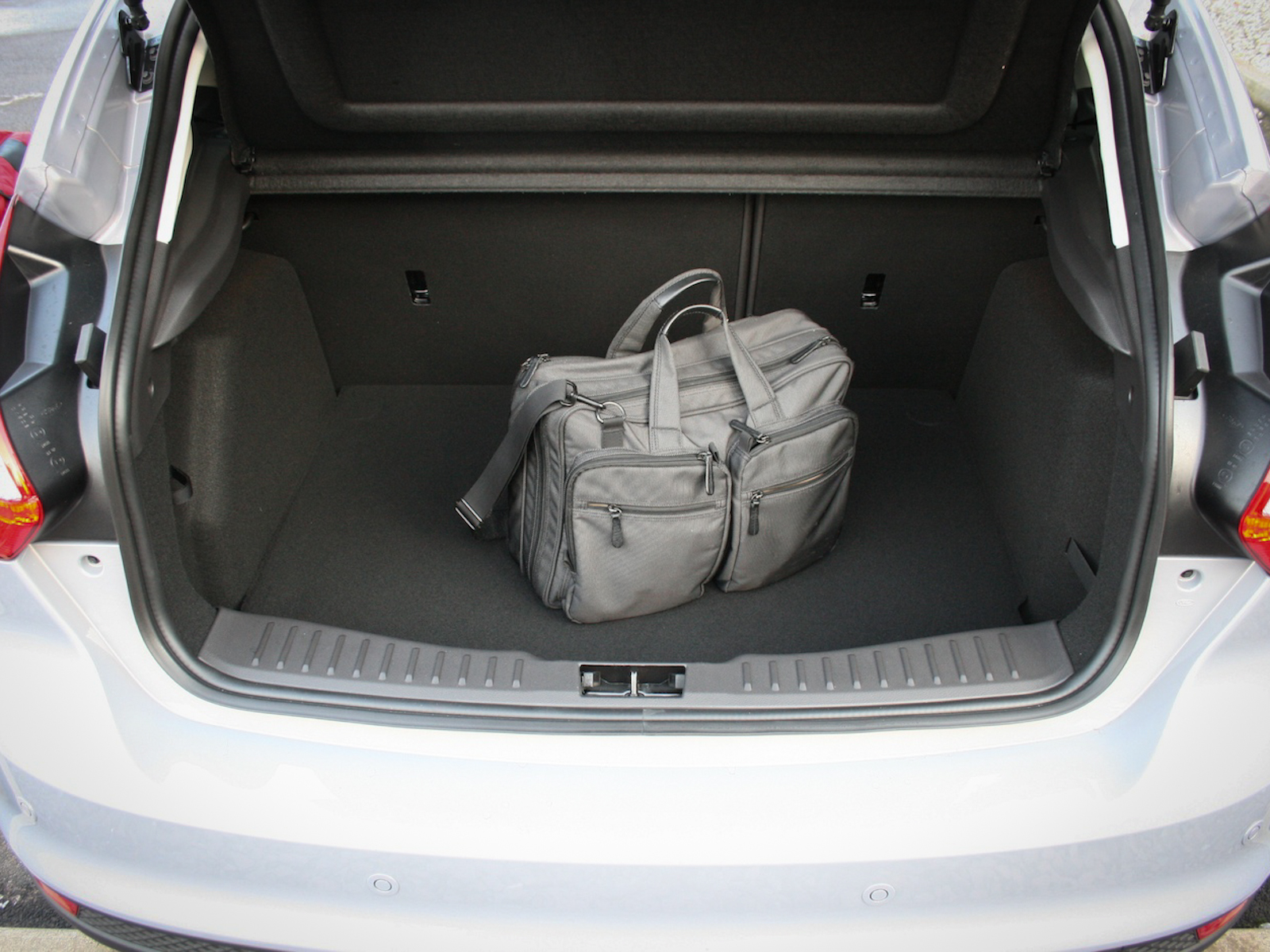 Trunk is well proportioned and square, but slightly smaller than in the previous car

In Detroit recently, J Mays told us the company was in the process of ‘quieting down' Kinetic design, as part of a wider effort to position Ford as a more up-market brand. The Vertrek concept is an exemplar of how the company might begin to achieve this, but the Focus has the hallmarks of a car designed before this strategy was employed.

The detail design - particularly the rear taillights, blanked-off front grille sections, and a shut line over the front logo mark which makes it looklike the hood isn't closed properly - let it down. But the overall design of the Focus, while busy, is now quite distinct and unique in this class.

The Focus presents an extrovert, expressive langauge, which is a useful point of differentiation in a class of me-too cars. Its competition is indistinct, particularly given the new-found design sobriety of the latest Citroen C4 and Renault Megane. It also answers a key criticism of the old car's design, which many viewed as being overly simple, to the point of being dull.

The latest incarnation has grown physically in order to accommodate its broader brief, yet the packaging feels more compromised for a small family car. Trunk space is now slightly smaller than in the previous model and rear legroom is only average for the class. This is in part born from a strategy to place the core Focus as the more sporty, driver-orientated product, within a five-variant model line-up. A small family in a current generation Focus may be pointed in the direction of the C-Max come new car time according to Ford.

The busy-ness of the design language continues inside with a driver-focused IP. An average six foot-tall male will find themselves slightly hemmed in because, on right-hand drive cars, your left (clutch) leg is pushed against the hard plastic of the lower center stack shroud and transmission tunnel, which feels unnecessarily wide for a front-wheel drive car. The lack of a proper clutch-foot rest doesn't help matters.

The IP itself is of much greater tactile quality than the previous-generation car. The shape molding is superficially interesting too, but the overall environment sends mixed messages. There's an obvious desire to match the likes of Audi in perceived quality, but there's a lack of real cohesion in the design. It is a real kaleidoscope of lines and shapes, and in our eyes has none of the calm elegance that speaks of a premium design.

Simple factors, such as the typography, which isn't consistent between gauges and screens and the center digital display in the gauge cluster which chops off long words, are the kind of things that you won't find in a VW Group product. And the upper audio control with either the piano black or mobile-phone keypad-aping design, clash rather than harmonize.

Switchgear and ergonomics are questionable in places too. As in the Fiesta, it's far too easy to operate the hazard lights while adjusting the radio, and the rear wiper and wash function has become a tiny toggle switch on the end of the stalk.

Despite all of this, we suspect the more grown-up nature and focus (if you'll excuse the pun) on technology will prove to be a big draw for potential owners. They're unlikely to care that there's a slight loss of driving enjoyment caused by the move to electric power steering, more likely to be wooed by the fact that this technology means that - with the right option pack specified - the Focus can effectively park itself.

Yet we can't help but wonder whether some of the car's growing pains have been caused by the simple fact that the Focus must now work in so many varied contexts, comply with so many different regulations and appeal to consumers with wildly different tastes and expectations. As such, the Focus has become a car that is a jack-of-all trades, but appears to be master of none.