Progress through re-evaluation of classic concept reinvigorates a genuine icon, the Mazda MX-5

It’s refreshing that Mazda took its brave pills when creating the all-new MX-5. The industry is increasingly keen to apply the ‘icon’ label to anything that proves popular with customers, and with this mindset invariably arrives a creative straightjacket.

Witness the restricted subsequent versions of the BMW Mini or Audi TT – cars that, ironically, attracted customers in their first generations mainly because of their disruptive characters. The MX-5’s legacy is far longer than either of those cars (it’s 26 years since the first one buzzed off the production line in Hiroshima), yet the weight of history has been lifted from this fourth-generation’s lean new shoulders. 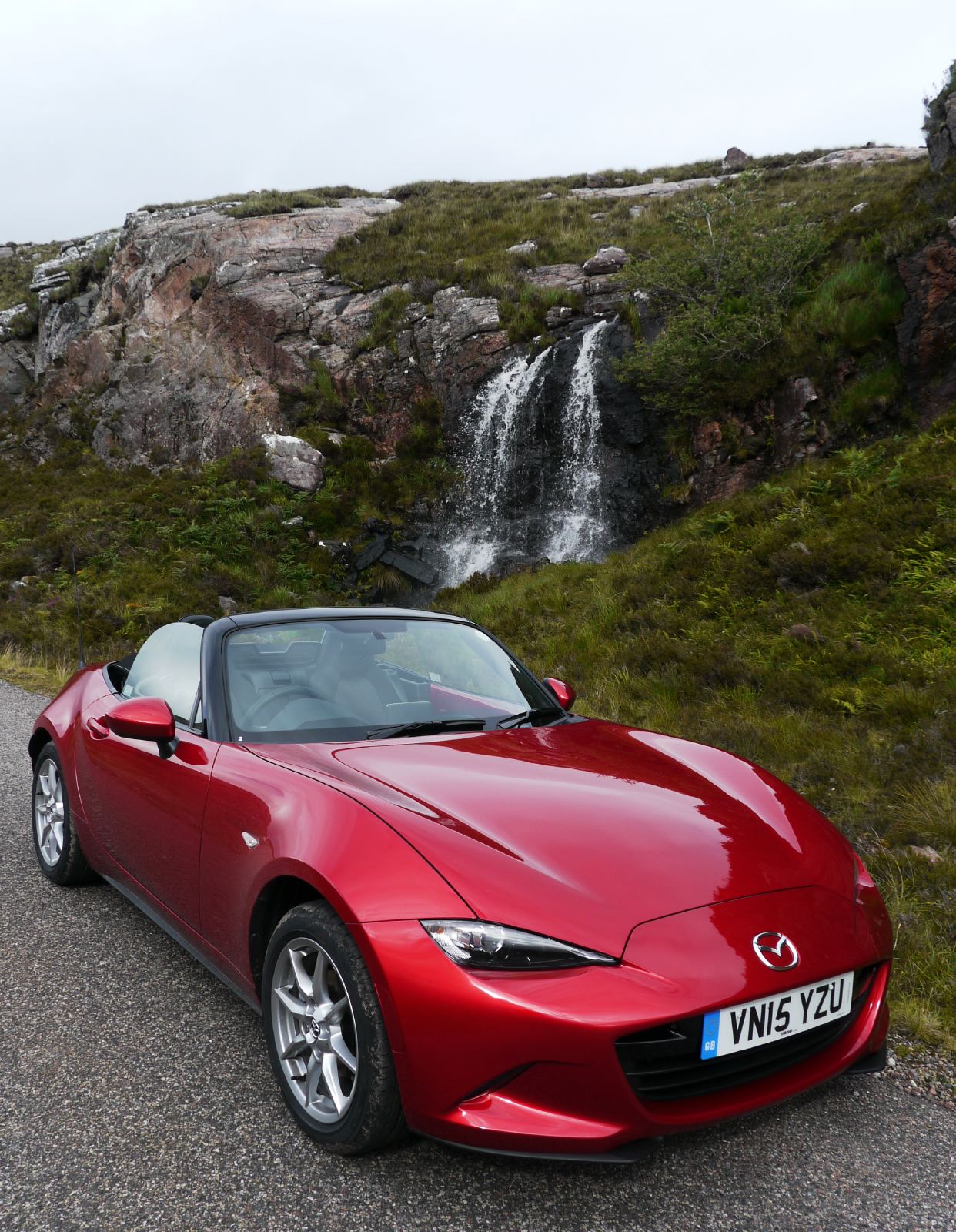 While the second (NB) and third (NC) versions were rather gentle evolutions of the original – the latter in danger of appearing to be a slightly bloated caricature of its 1989 ancestor – the ND’s makers clearly aimed to create their own seam of the model’s history, rather than cling to its coattails.

This is clear every time you walk up to the car. There’s little that directly relates to the past, yet this couldn’t be anything other than an MX-5. It’s a very clever trick. The newfound creative freedom has allowed the designers to visually communicate its lightweighting regime as well as its reduction in physical size. The dropping hoodline with its apex well behind the front axle line and the diagonal surface change behind the cabin may seem awkward in photographs or in the artificial setting of a motor show, but on the street these tricks manage to visually tuck away its extremities and exaggerate its modest rear arches. It looks even smaller than it is, yet retains a superb stance. The execution of most of the detailing doesn’t let it down the closer you get, with one exception. 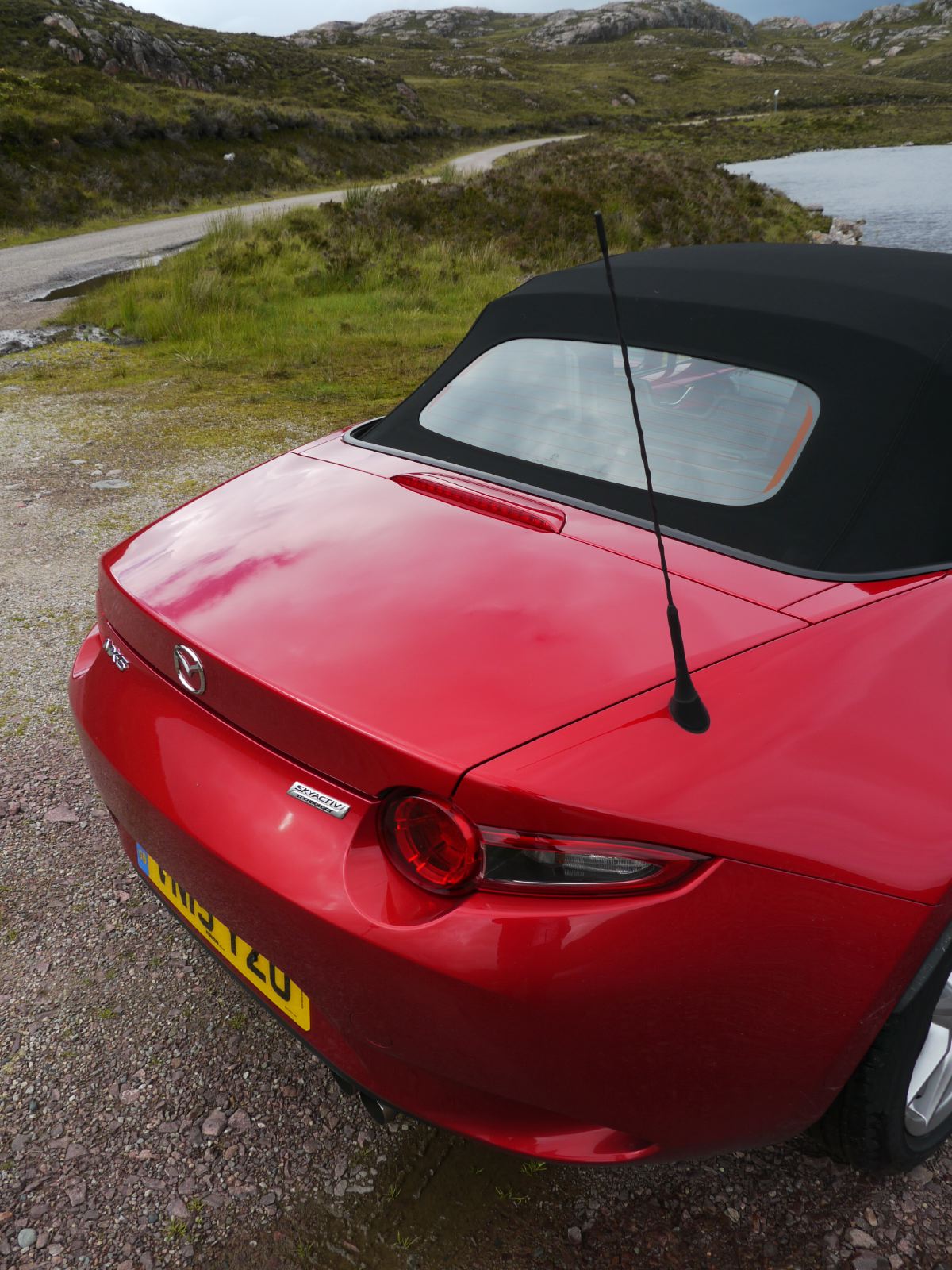 Mazda provided a first-generation MX-5 to drive, proving the point that old cars are, almost universally, far inferior to new ones. However the tactility of its metallic lozenge door release seems one of the few signs of things being better in the past. Not that the MX-5 is alone in this – why have virtually all door handles have become hollow plastic hoops that would feel underwhelming on a refrigerator? 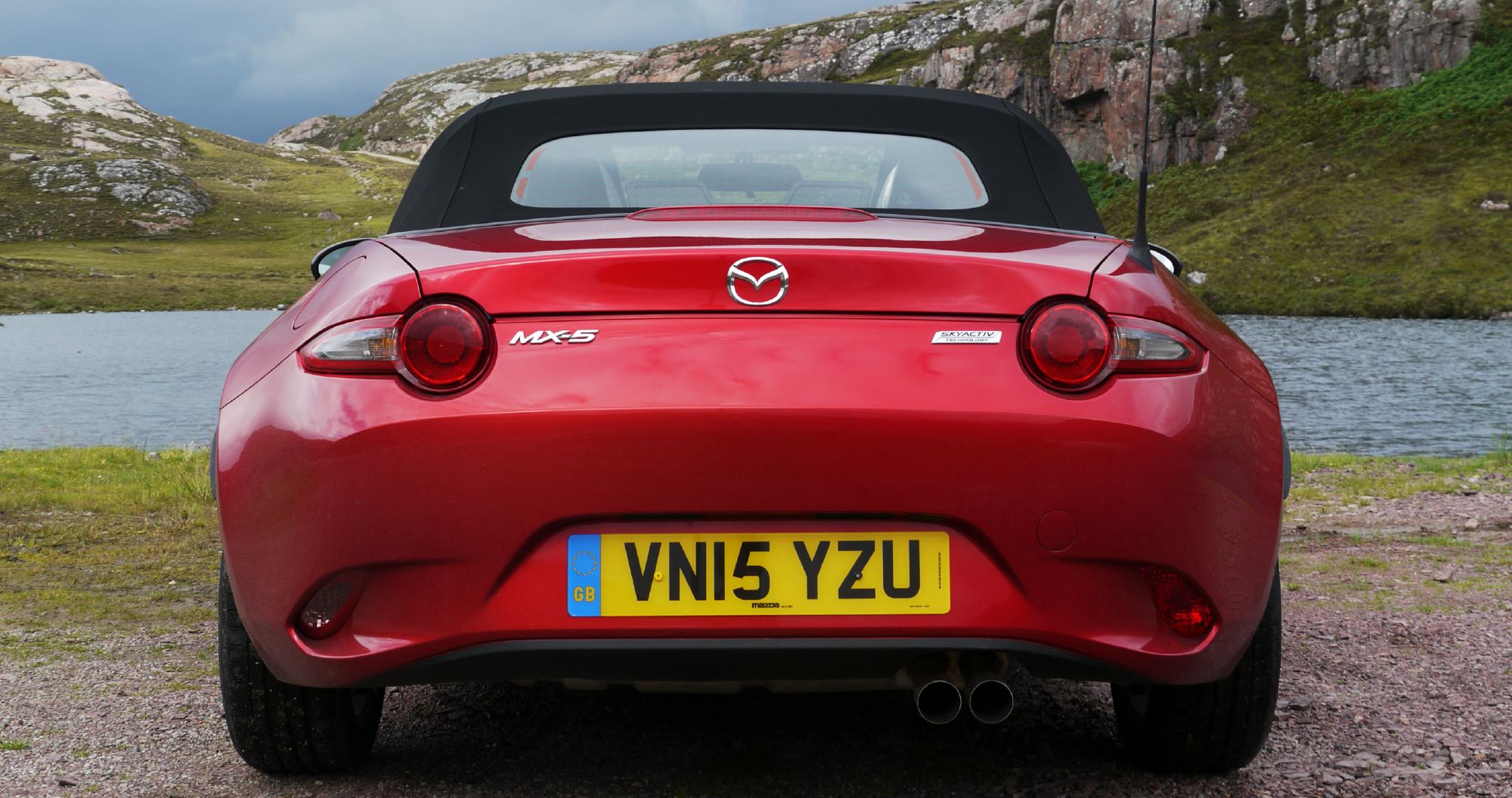 But the new car counters this regression with a boot handle that appears not to exist. Cunningly hidden on the upper surface of the licence plate recess (it stays clean and dry even in foul Scottish weather), a little rubber-covered button pops the rear deck. What you notice is how incredibly light the lid feels. Mazda no doubt reduced the resistance of the hinges and springs to emphasise the point, but when you spot the lack of inner finisher on the bare, double-skinned lid there’s no doubt that someone has really cared about the detail of the much-flaunted ‘SkyActiv’ efficiency programme that makes so much sense in a pared-back sports car. (It is ironic that the SkyActiv badge passed the weight-saving audit and in doing so undid all the good work the hidden boot release does by spoiling the tail’s clean surfaces.) 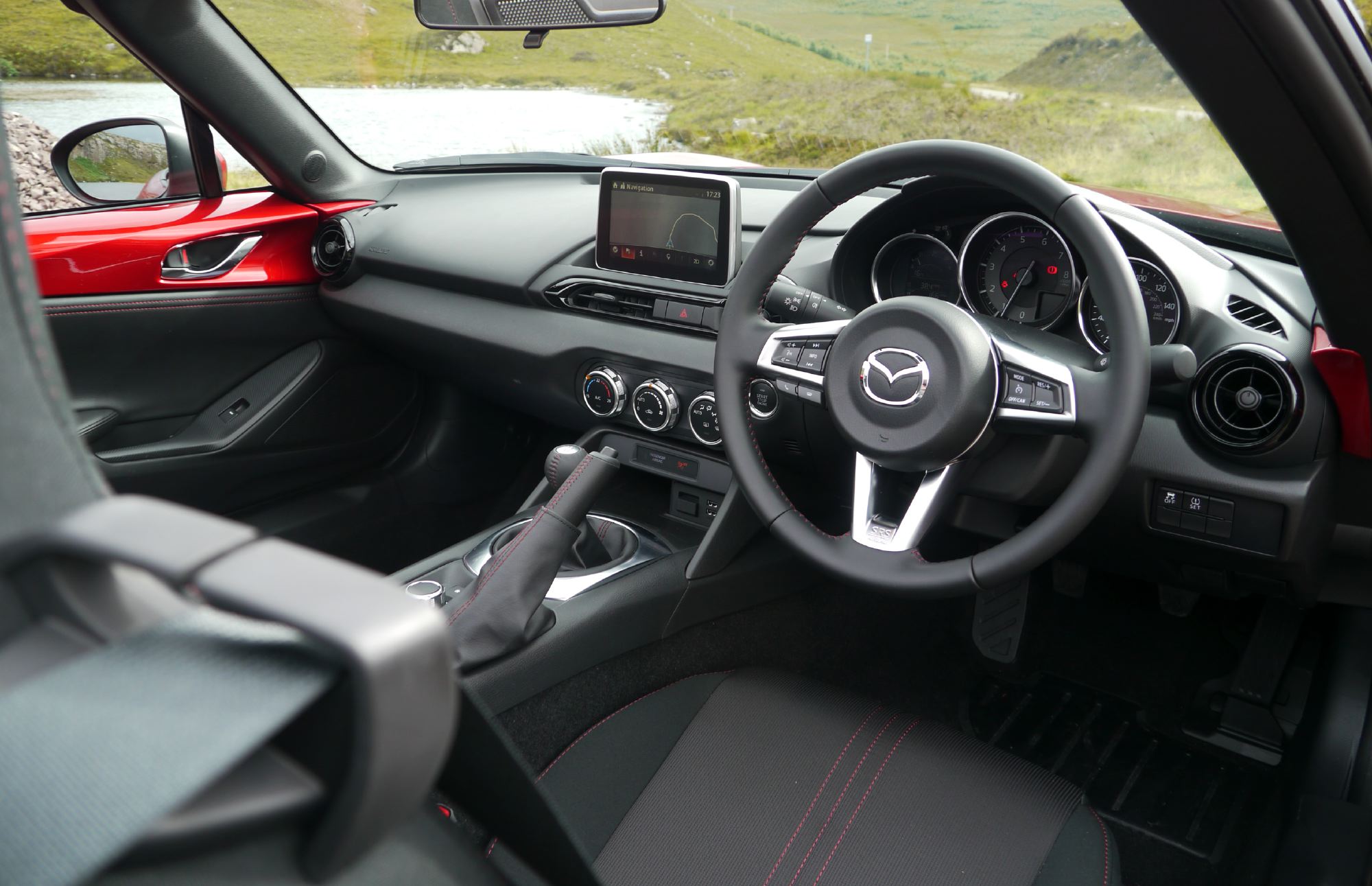 But what’s really smart is that weight has been taken out without removing the feeling of solidity or comfort. There is nothing in the MX-5 – or, more importantly not in it – that feels like convenience has been compromised. Its interior feels extremely solid with impressive materials and is available with almost every convenience you could reasonably want – heated seats to keep your vitals warm, speakers in the headrests to keep your ears entertained and a central ‘infotainment’ screen to keep you heading in the right direction. The mixture of touchscreen interface when stationary and a central rotary controller works reasonably well and the graphics are clear. 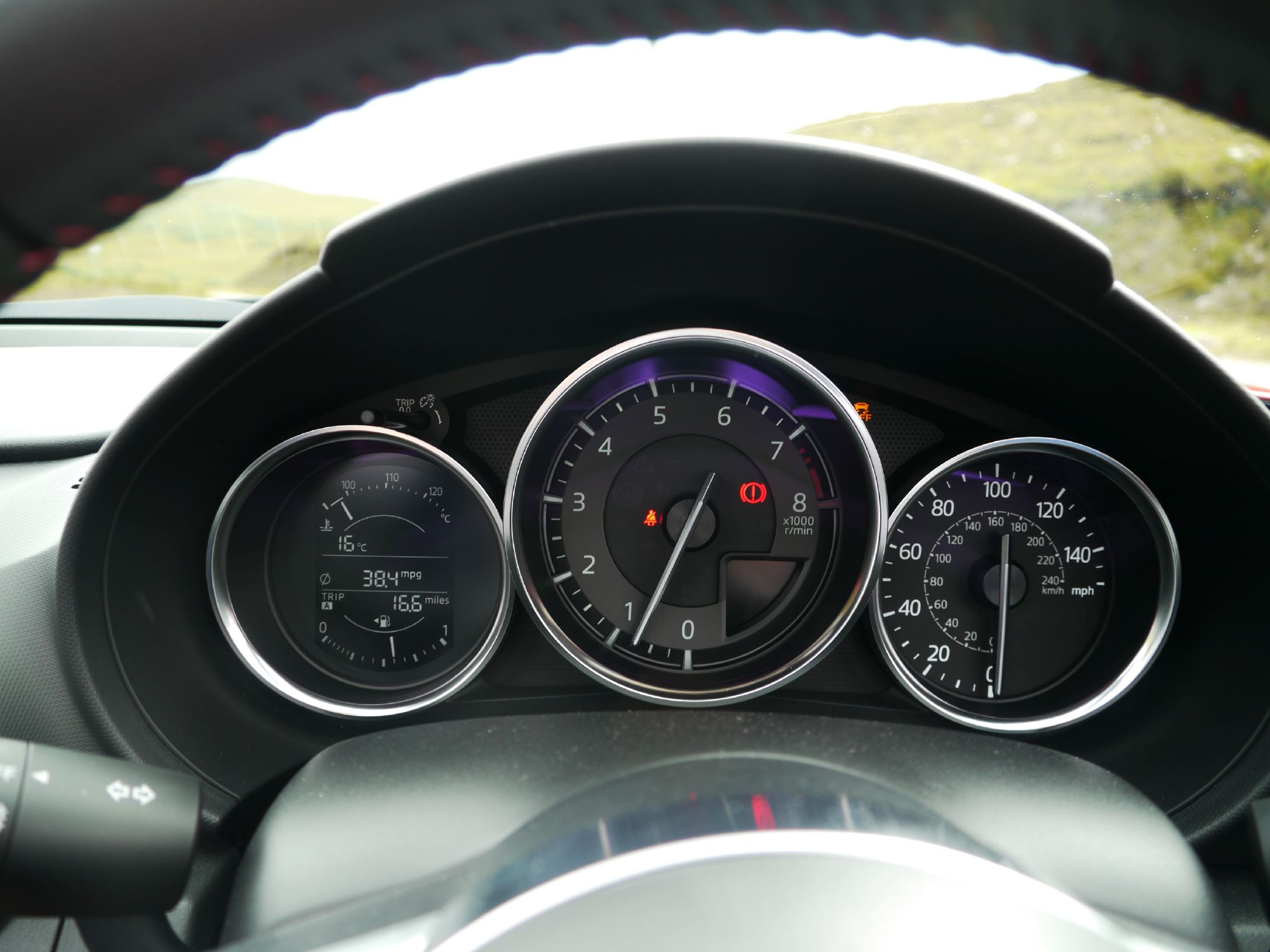 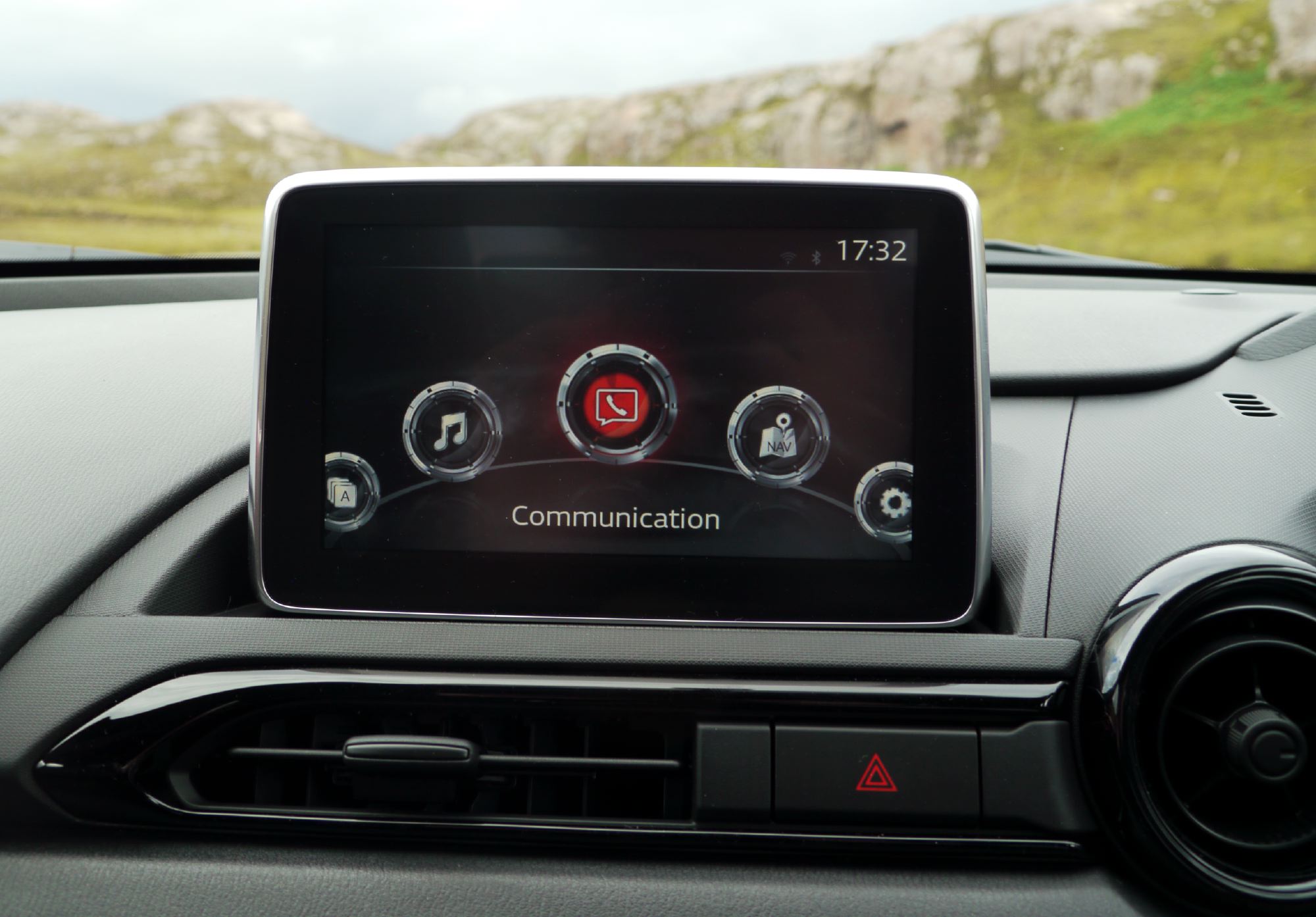 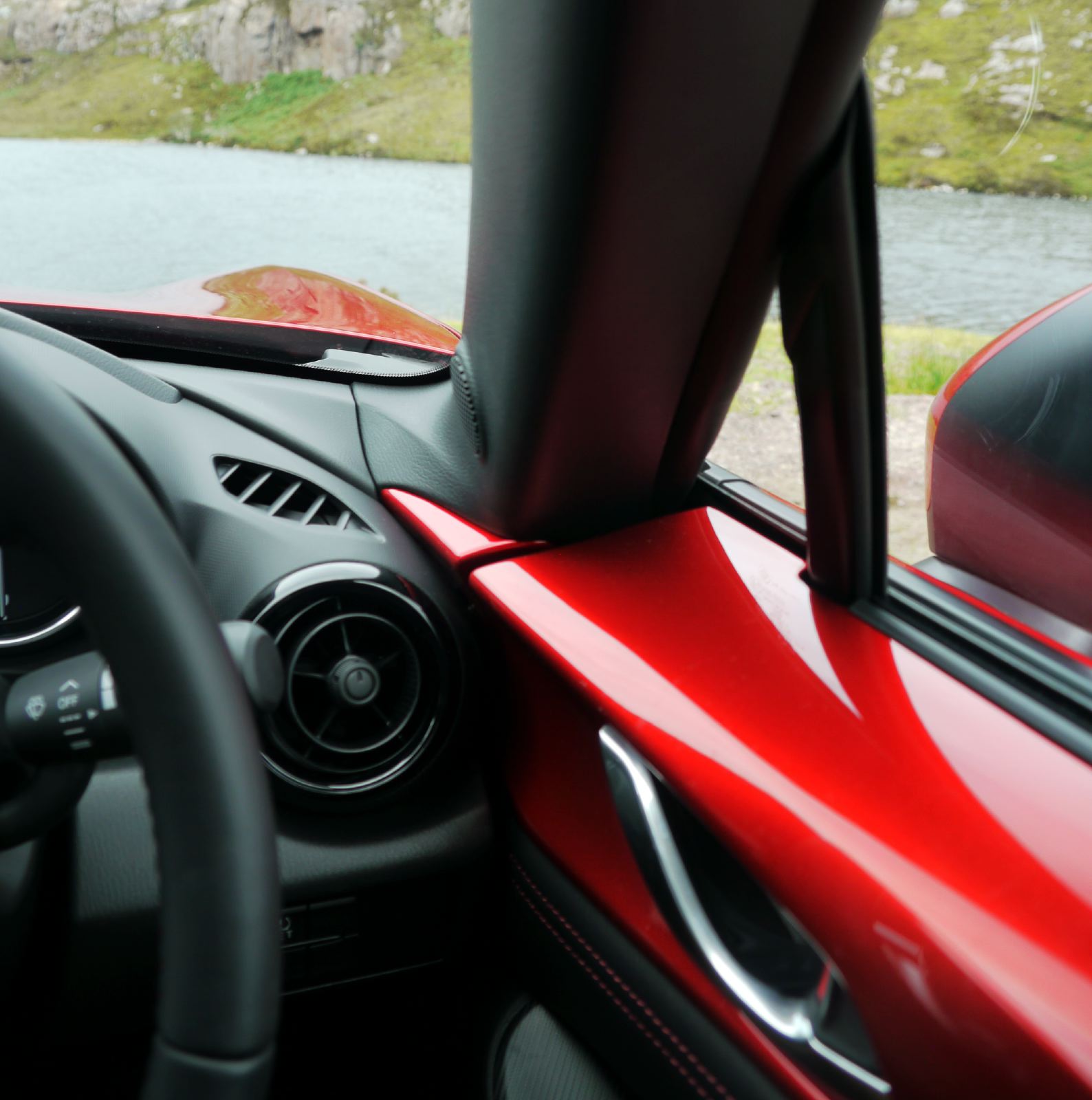 It’s a shame the basic instrumentation is slightly lacking though – the big central rev counter is fine and of course fits the car’s purpose, but it squeezes out the speedo, which is marked in too-wide 20-mph increments that make it very difficult to read at a glance. A secondary digital readout would be a big improvement. Other ergonomic niggles are seats that aren’t height adjustable and are set too high, and a general lack of storage space. The lack of a glovebox isn’t the main concern because it’s replaced by a decent-sized stowage bin between the seats up against the rear bulkhead, but where do you put your phone or indeed the infuriating non-key that ends up catapulting itself around the cabin if you drive it as intended?

These are small niggles though because the basics are so right. The roof, although now a little trickier to lower and raise (slightly less strong springing would help save a few back twinges) is very well insulated from noise and rain. In a horizontal Highlands downpour you’re left with a snug little bunker with a great view over the hood, its outer surfaces rising high from the centreline that skims the top of the engine – thanks to its pyrotechnic hinges to comply with pedestrian regulations – in a way that, probably unintentionally, is reminiscent of the original’s pop-ups. The flow of body colour between the fender tops and door cards adds to the effect.

Many refer to this car as back-to-basics, but that’s a misnomer. It uses the latest design and engineering techniques in such a carefully orchestrated way that they simply leave behind the essence of a modern sports car. It’s an object lesson in how progress though re-evaluation of a concept’s core values is the best way to sustain and reinvigorate an icon. 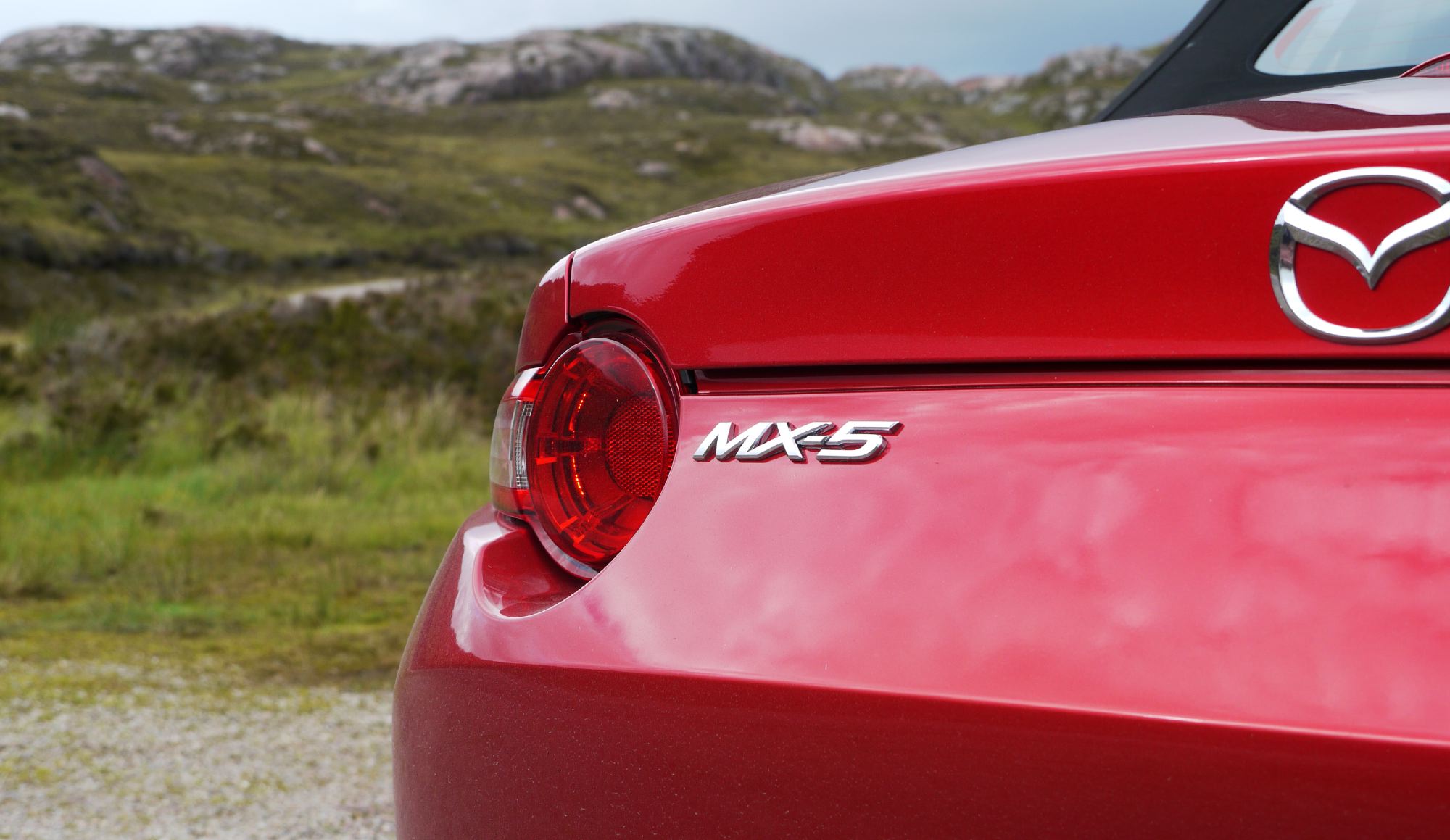