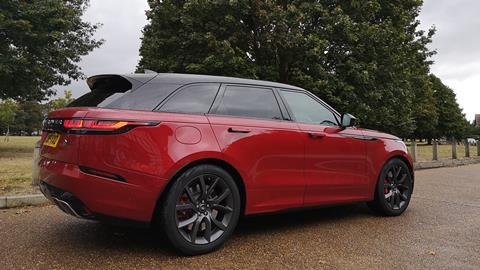 Land Rover’s Special Vehicle Operations has produced a new range-topping version of the Velar, and it’s a delight

Since its launch back in 2017, the Range Rover Velar has received high praise and scores of five star reviews from both consumers and press. It has claimed numerous awards, and has even been described as the “most beautifully designed vehicle on the planet.”

CDN’s initial review of the SUV during our first drive back in 2017 was positive, suggesting that the model was ushering a “new dawn” for the marque. However, our first impression of the user experience was one hindered by too many gauges, gizmos and gadgets, each providing a swarm of information that ultimately lead to confusion.

Two years on, and the new range topping Velar SVAutobiography Dynamic has hit the market. It was developed inside Land Rover’s Special Vehicle Operations (SVO) technical centre – a 20,000sq.m facility located in Warwickshire which was opened back in 2016. Here, a select group of engineers and manufacturing experts work to produce high-performance, highly luxurious, and often highly customised models. So what have the boffins been up to? 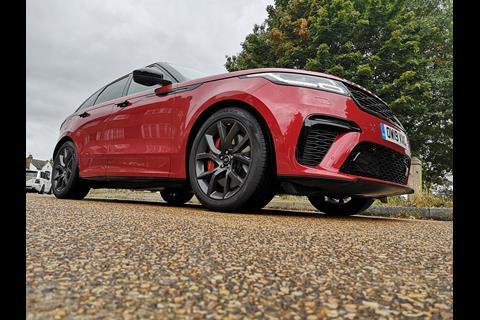 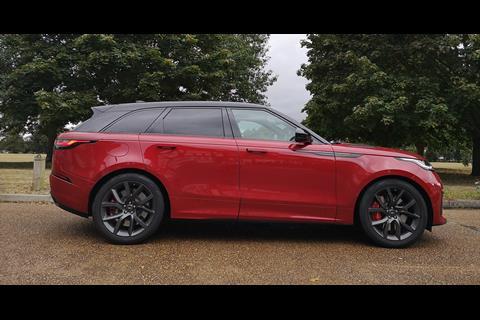 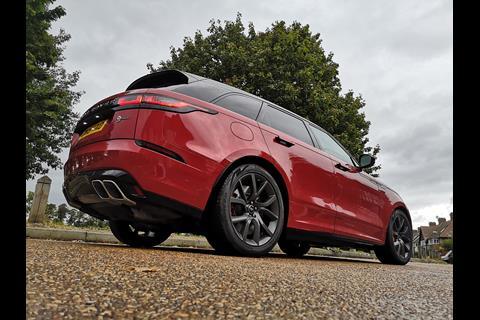 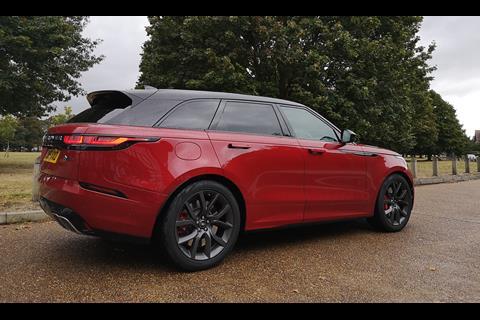 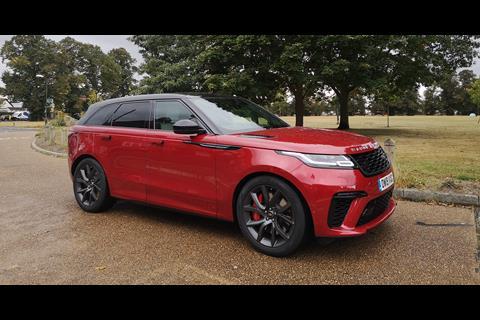 For starters, there is a new front bumper that features larger, functioning grilles, helping to cool the enlarged brakes as well as the 5.0-litre supercharged V8 (borrowed from the Jaguar F-Type).

The rear brake discs feature a two-piece construction to optimise weight and to dissipate heat more effectively. There is also a new grille, lower side mouldings and a new rear bumper, which includes a quad-tailpipe exhaust design that is 7.1kg lighter than standard.

Other exterior visual changes include optional 22-inch wheels with diamond-turned edging. The wheels themselves are 2.5kgs lighter than those on the regular Velar. All of this translates into a lighter, sharper and faster model – 0-62mph takes just 4.5 seconds, and the SUV has a top speed of 170mph. 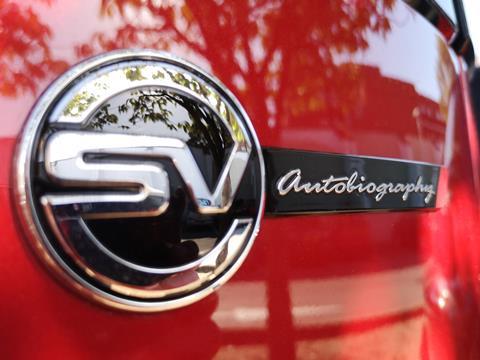 There are also more subtle, finer details added to the SVAutobiography Dynamic. For example, the fender vents have a gloss black outer finish and Graphite Atlas inner finish, designed, says JLR, to “enhance the striking design”.

Exterior changes are fairly minimal when comparing the SVAutobiography Dynamic to the standard Velar, perhaps due to the fact that the initial design of the SUV was highly praised.

Finally, the SVAutobiography is the only Velar that can come in Satin Byron Blue, but that will cost an additional £6,000. 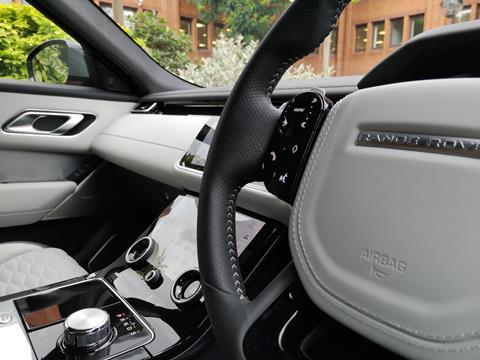 While outer details hint at power, the interior emphasises the luxurious side of the SVAutobiography Dynamic. It’s a great place to sit. The twin-stitched perforated Windsor leather seats feature a unique diamond quilted pattern, creating a slight ripple effect that adds to comfort.

No surface within reach feels cheap to touch. There are elegant details everywhere, such as knurled edging on two of the centre console dials that are used for climate control and stitching that runs along the dash and the doors. 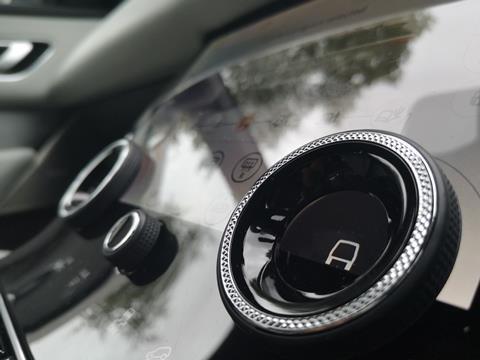 The infotainment system, called Touch Pro Duo, is the same as in the standard Velar. Information is provided via four outlets: the 10-inch touchscreen which sits on the dash above the centre console, the 10-inch screen that is integrated into the glossy centre console, the interactive driver display, and the head-up display. Rear seat passengers are also treated to screens that are mounted inside the front headrests.

On pushing the start button, the 10-inch touchscreen on the dash does the satisfying automatic tilt forwards to make it easier to see for the driver. It’s not new to the SVAutobiography Dynamic, but it’s just great. 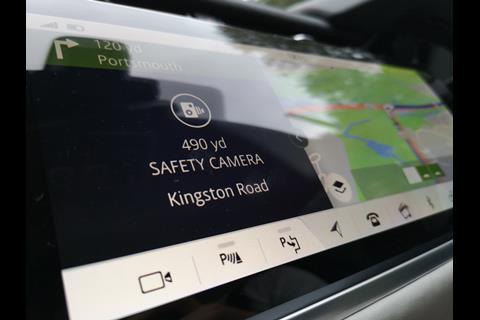 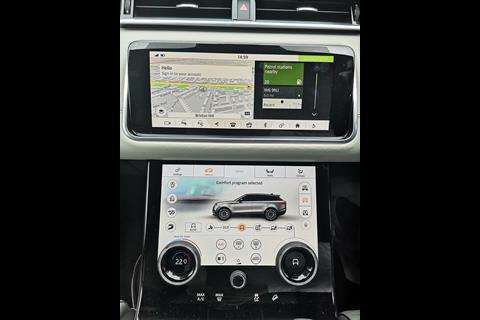 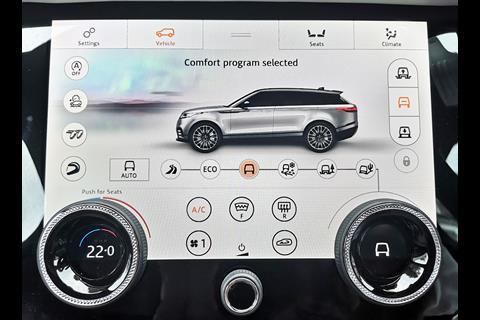 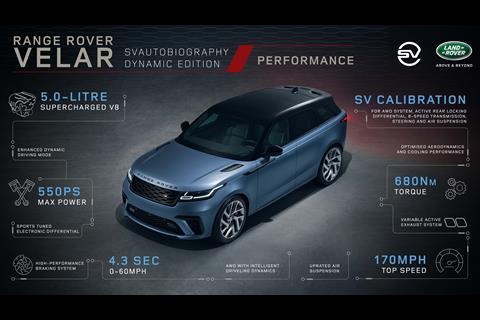 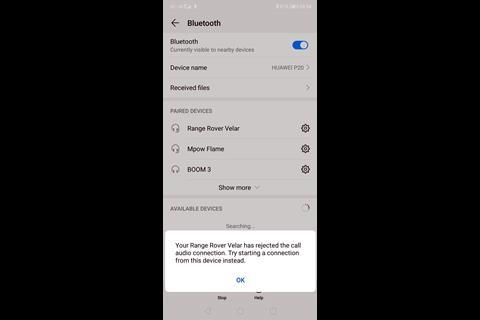 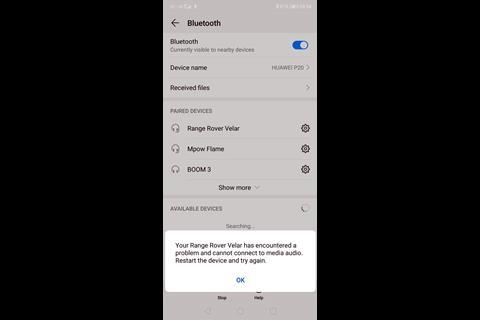 Overall, the infotainment system works as expected and is pretty easy to use. It has sleek graphics, but doesn’t suffer from too much lag and poor loading times, which are far too common in other new cars.

However, there are one or two snags. For example, it sometimes doesn’t like to be connected to Android phones, but seems to accept iPhones without a problem. Also, the screen on the centre console isn’t particularly well positioned, making it difficult for taller drivers to set the temperature without taking eyes off the road.

As well as reducing weight, the team at SVO has enhanced performance by making changes to the chassis and suspension. The damping set-up, damper control system and shock absorbers have all been adapted, and there are new stiffer suspension springs and link bushes.

The all-wheel-drive system has also been tuned, allowing it to deliver 100% of the torque to either the front or rear wheels when required. This has all been done to make the SVAutobiography Dynamic more agile but controlled when driven harder.

This SUV does a bit of everything. Despite its size, it will dig into corners without suffering from too much understeer, and is surprisingly easy to manoeuvre when it comes to city driving. Parking is made simple too with the help of all the cameras and sensors. 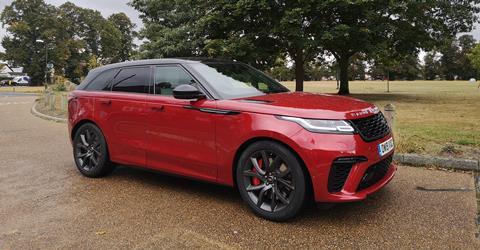 The SVAutobiography Dynamic is almost in a league of its own when it comes to motorway driving. The ride is super smooth, the cabin is ultra comfortable, and the driver assistance systems all function well. It’s a very nice, calm experience… until fuel consumption comes into the equation.

Apparently it will average around 23.9mpg, though more restrained drivers could push over the 25mpg mark. This is about standard for a powerful SUV (though Porsche claims its Cayenne will do over 30mpg). It seems that the combination of power and size results in constant trips to the petrol station.

The team at SVO attempted to combine power with luxury when designing the SVAutobiography Dynamic, and passed with flying colours. Achieving a balance between the two has proved a difficult task for carmakers in the past, particularly when it comes to larger vehicles.

The differences between the range-topping model and the standard Velar are subtle, but if anything, this makes it even more special. The Velar is already a brilliant SUV – it looks great and drives well. Changing too much would have potentially ruined the good parts.