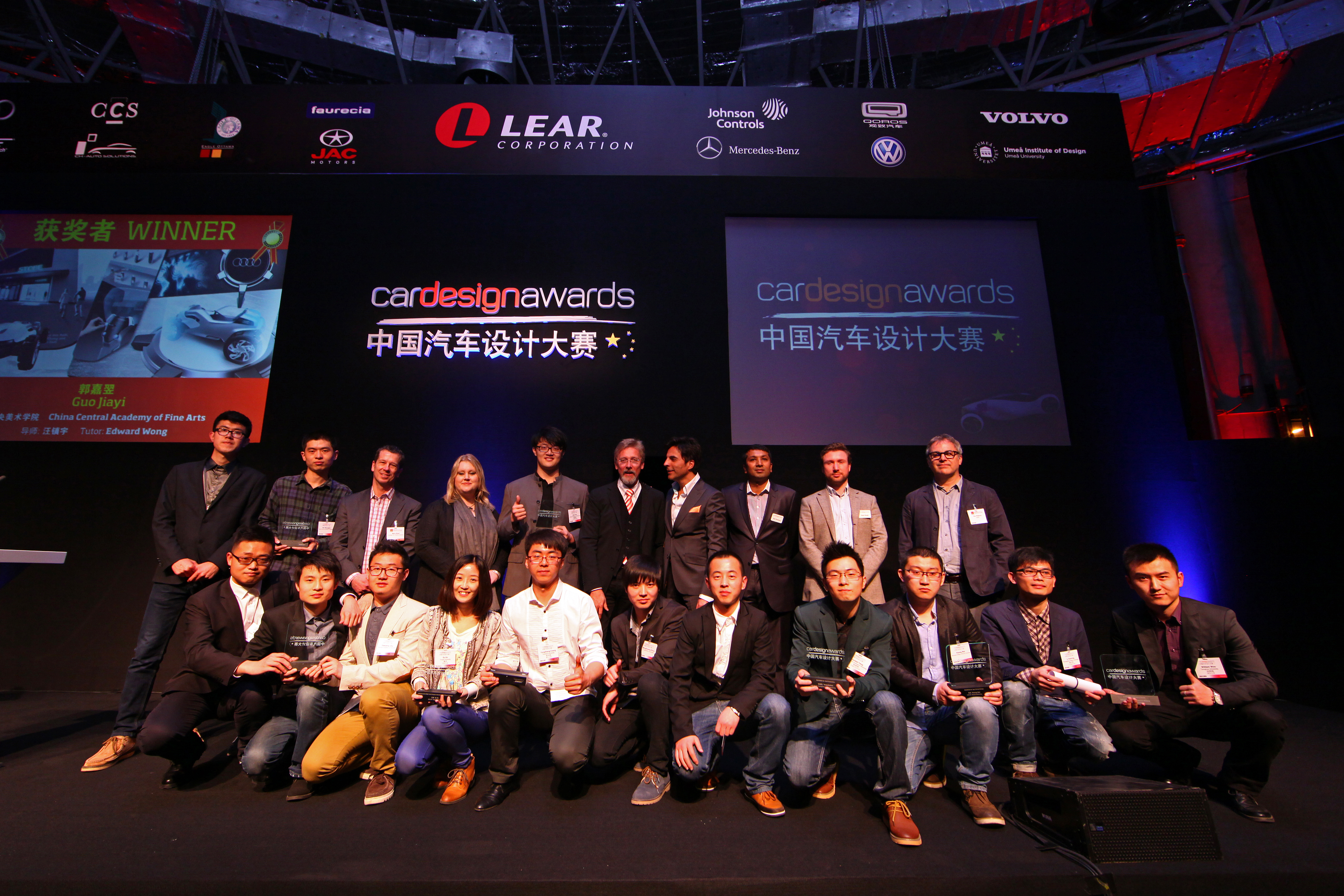 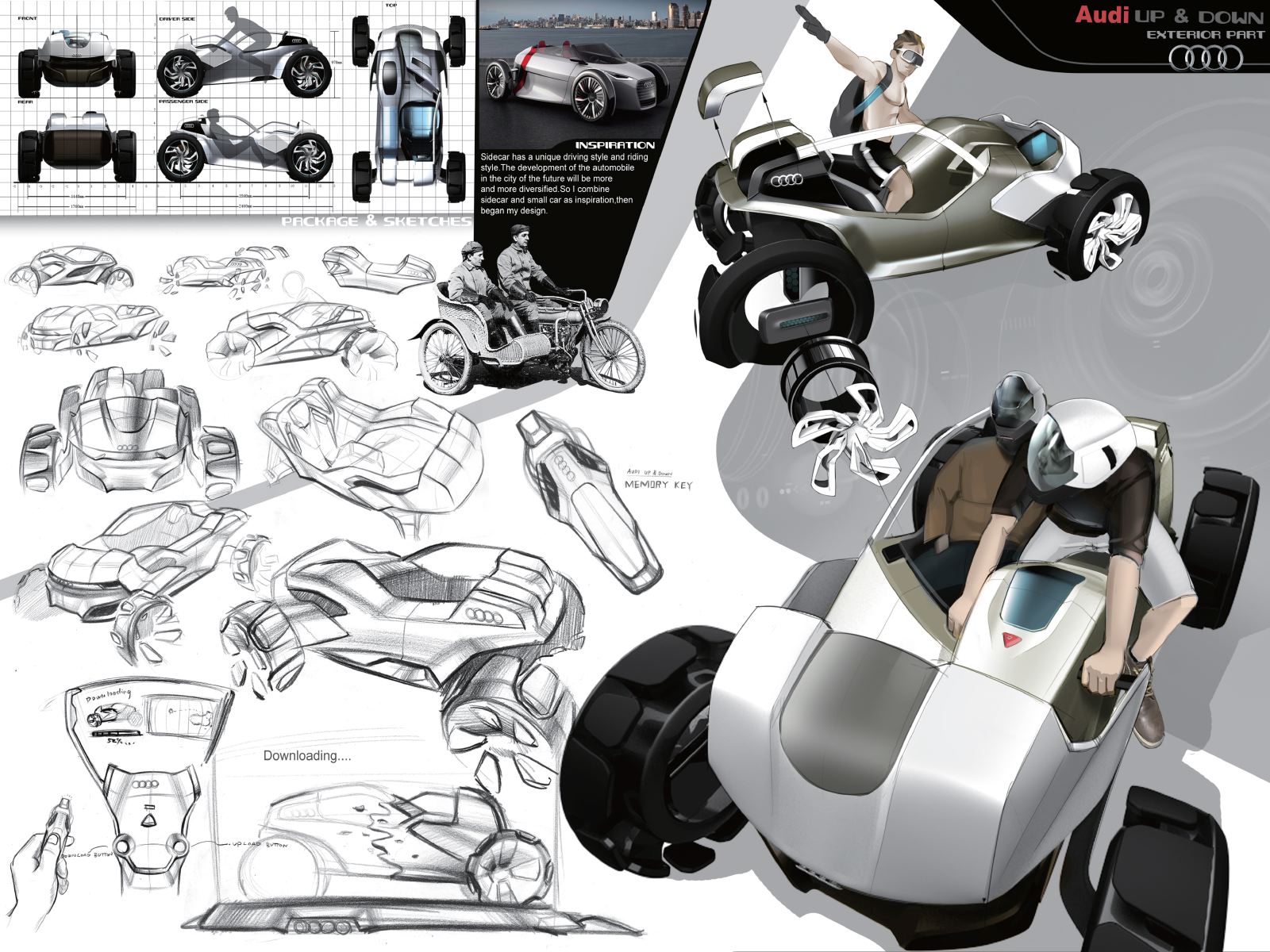 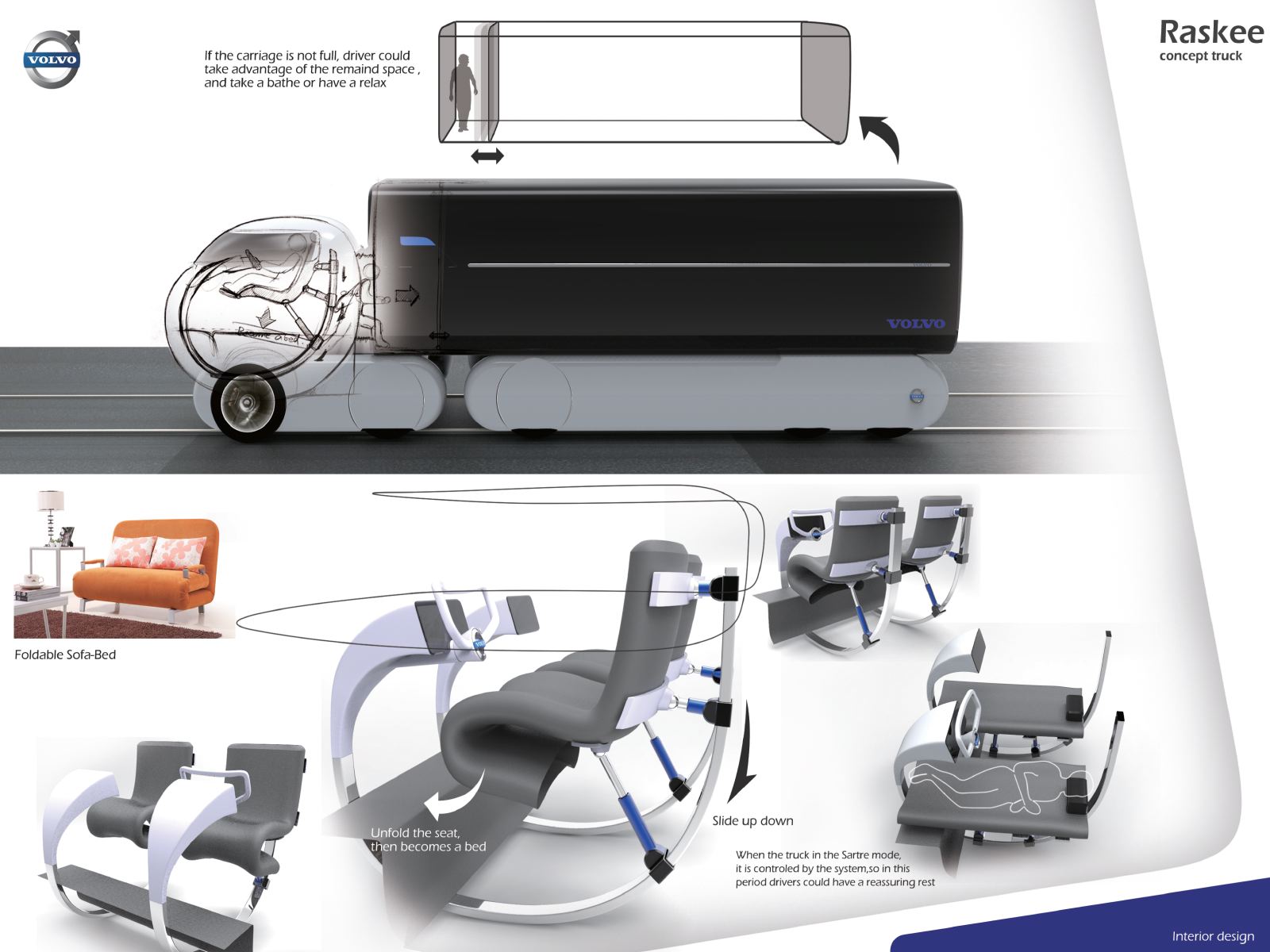 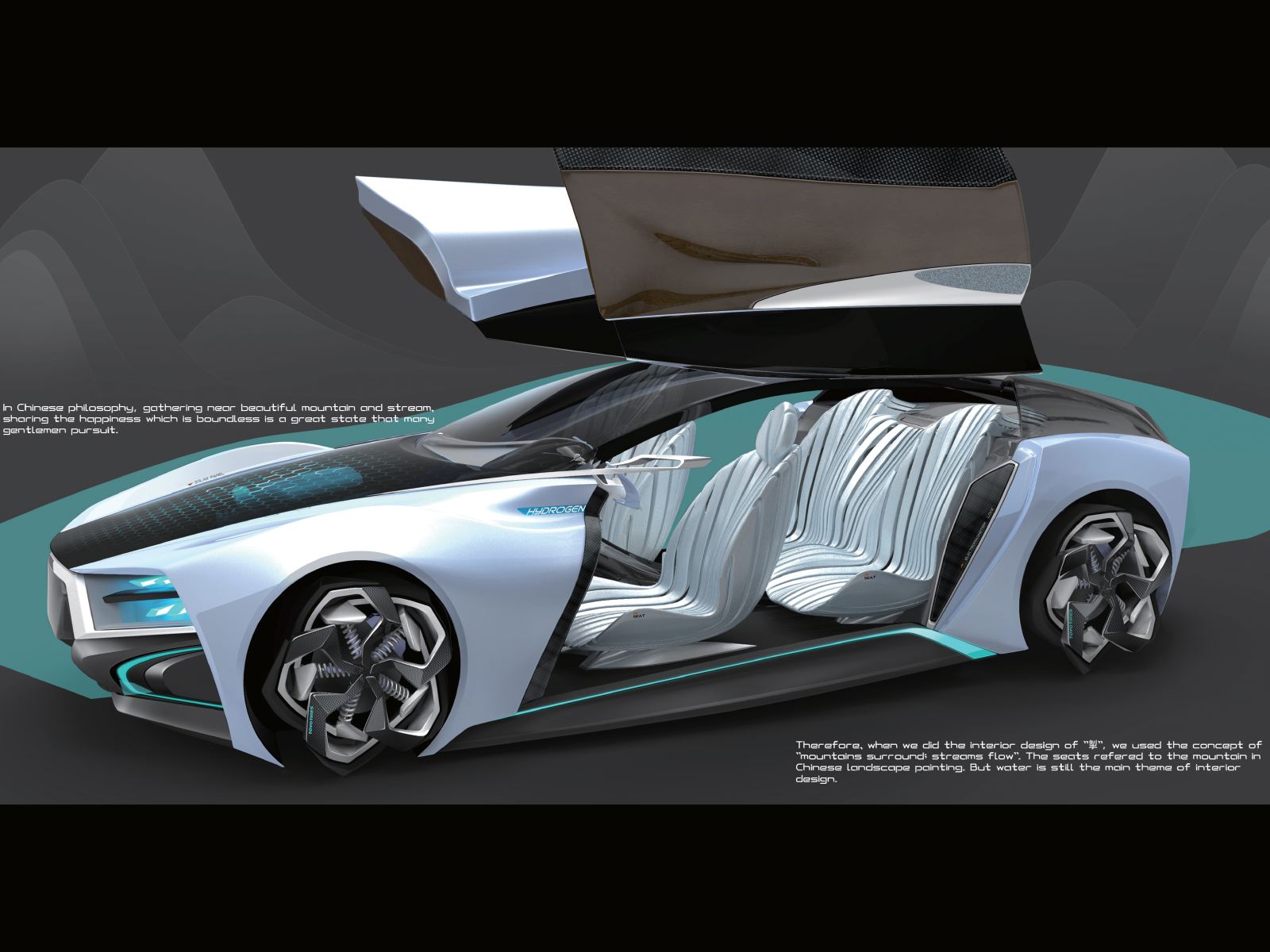 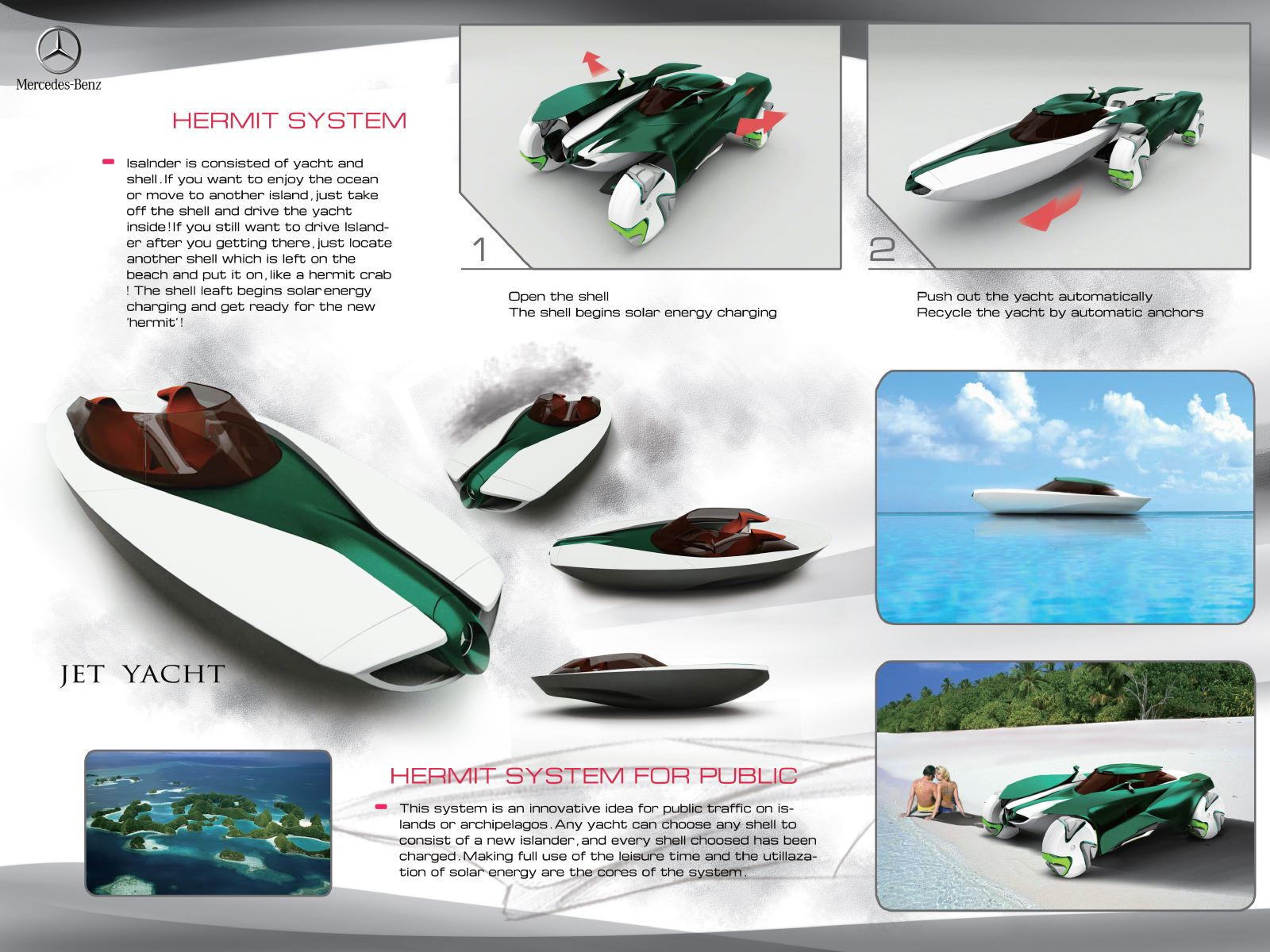 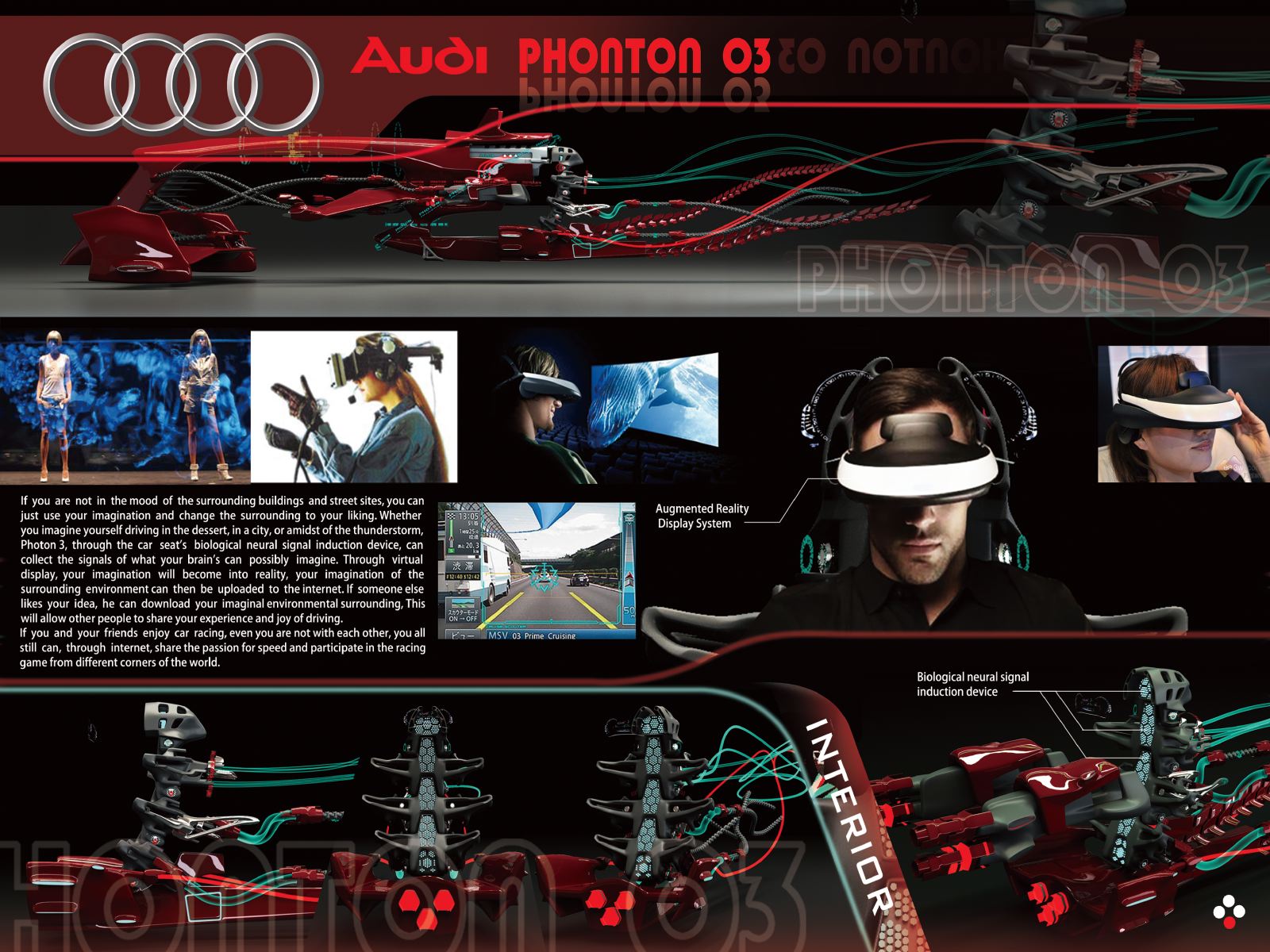 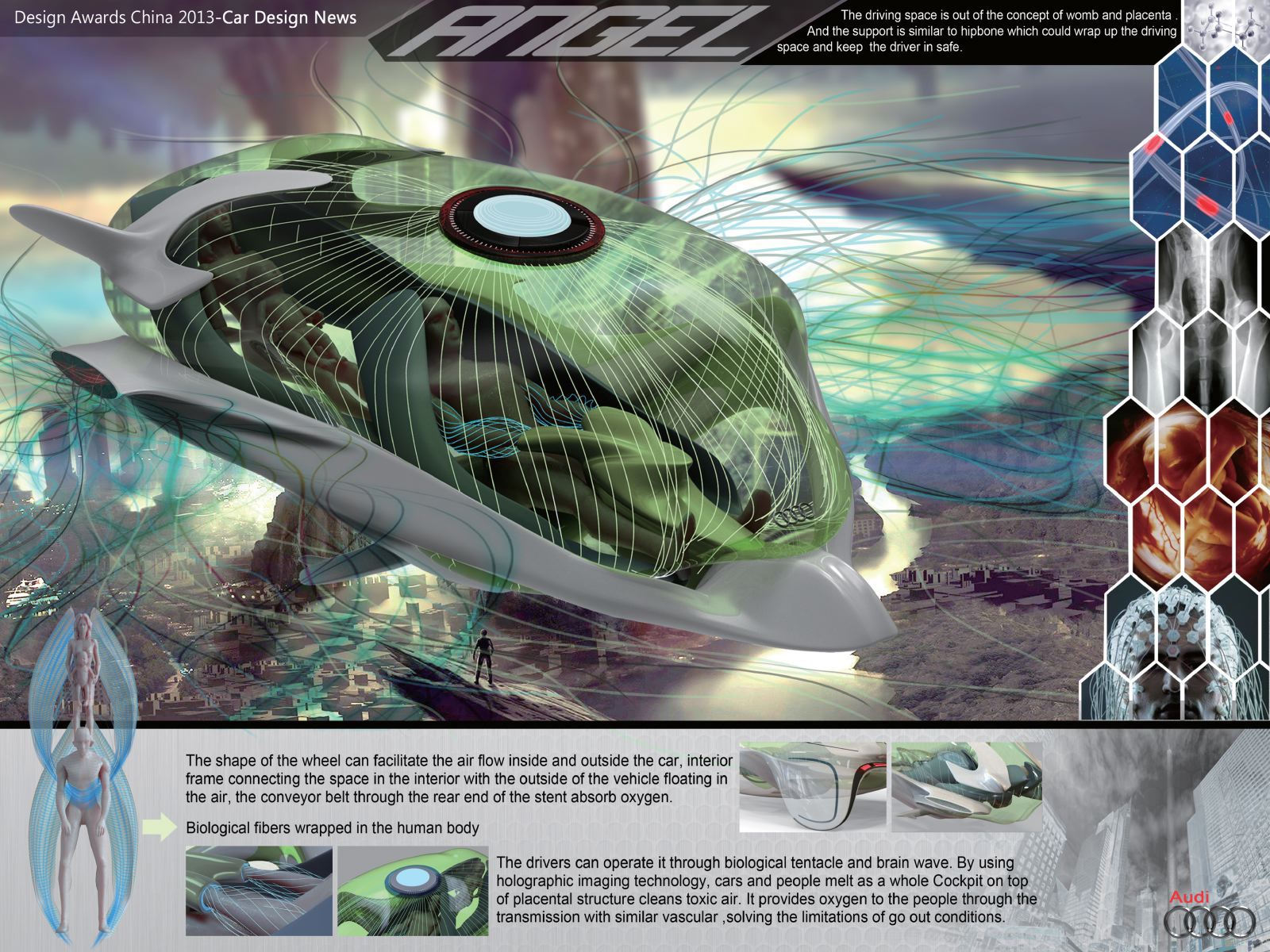 The judges were highly complimentary about the quality of entries and the rapid progress in design terms being seen in student work in China.

Judges comments
“Mature development and beautiful presentation, a most professional submission,” was the comment about one of the leading entries. The students are also expressing themselves more confidently, the judges felt. “Wonderful harmony between all elements. Dreamy and surreal,” was another comment, as was “a liquid form that yearns for the viewer to want it…now.”

The Awards are in their fourth year, and attracted 40 percent more entries than last year from no fewer than 136 design schools. The students designed to one of the briefs set by Audi, Mercedes-Benz, JAC, Qoros. VW and - an innovation this year - Volvo Trucks. Entries were open to students studying any design discipline full time at a school in China.

The 13 judges included a mix of design directors from international OEMs, Chinese OEMs, Tier 1 suppliers and international design schools. Nine awards were made, from which one was chosen as the Student Design of the Year.

The awards ceremony took place on the middle evening of this year’s CDN Interior Motives China conference, and the winning entries were displayed to the domestic and international delegates on the day after the ceremony. 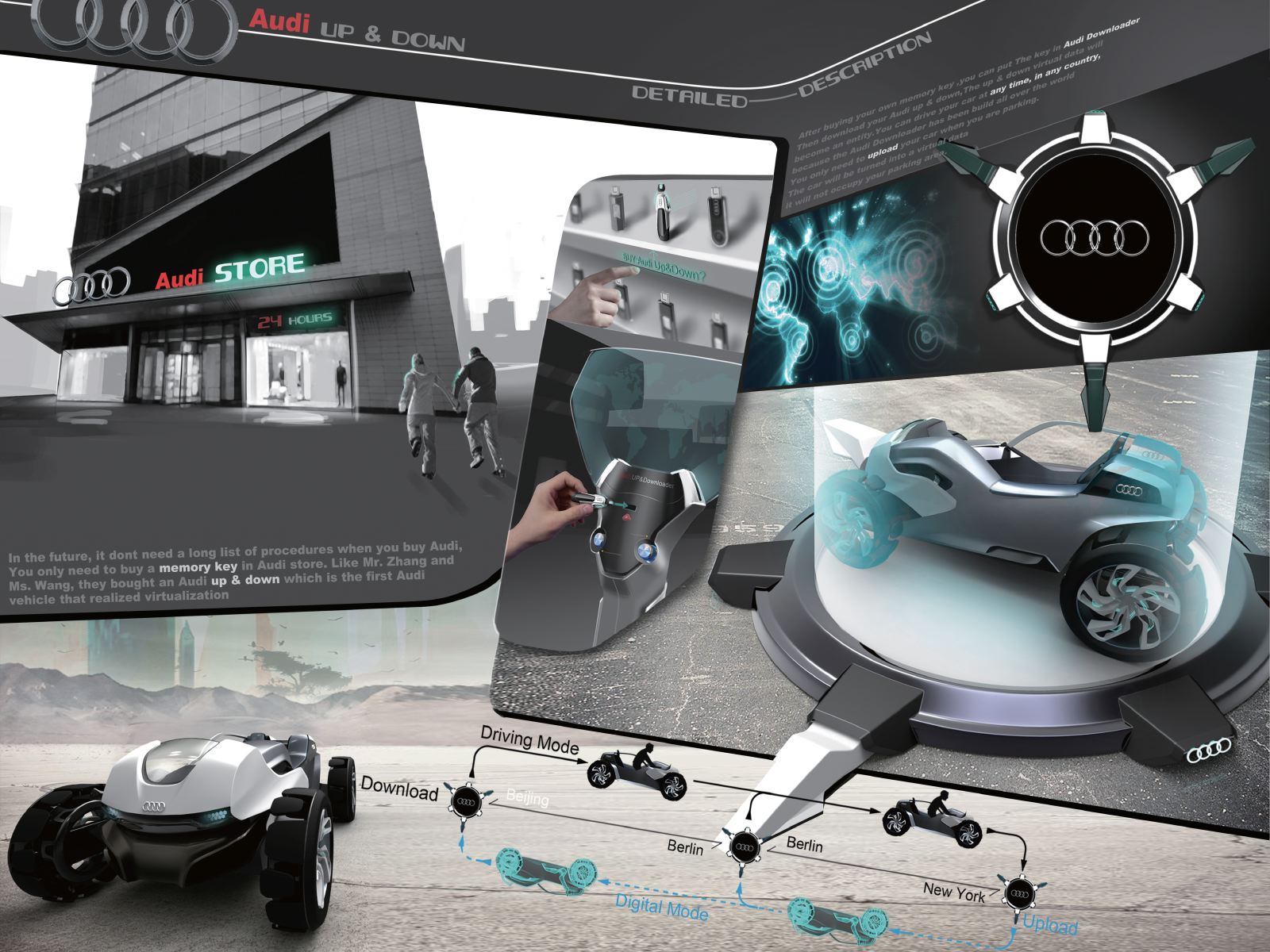 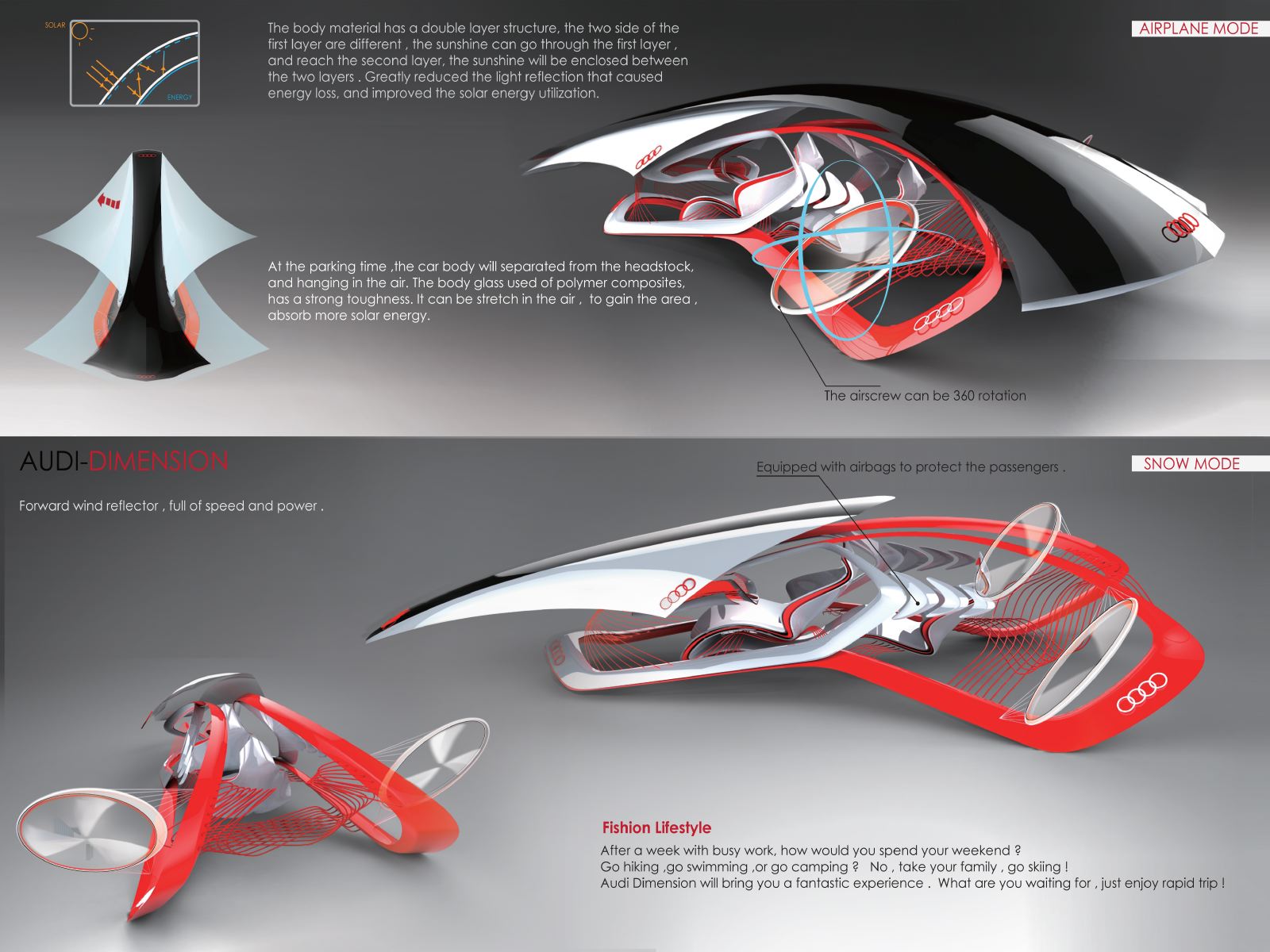 Su Ao, tutored by Liu Long at Tongji University, beat off the competition to be awarded ‘Best Design in Harmony with China’s Heritage,’, a tricky category to judge 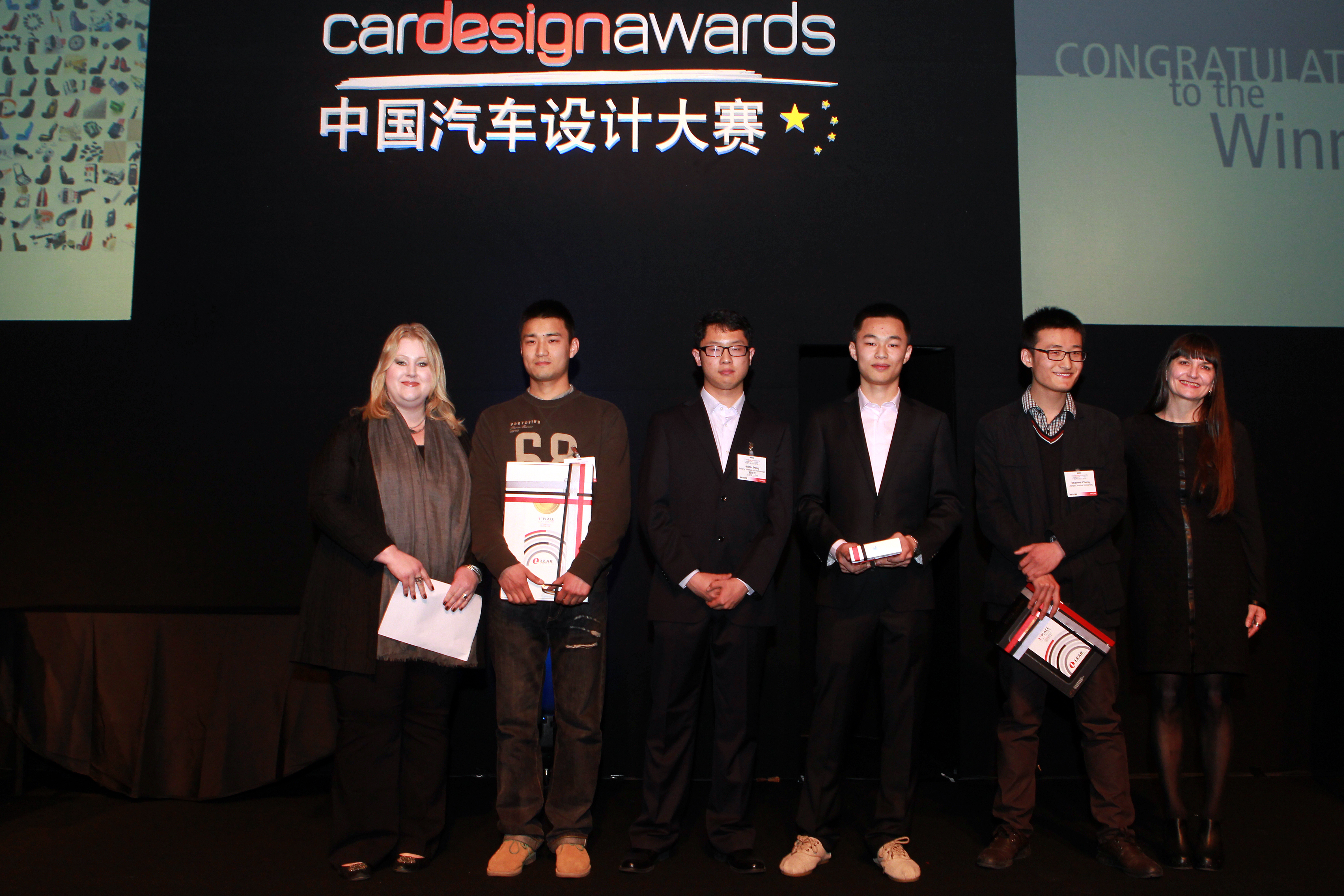 “A modern interpretation of a motorcycle’s sidecar turned into a car. How refreshing!” was the comment of one judge. Another added: “A versatile and cool design concept. Small and ideal.”

After fierce debate at the judges’ conclave in Shanghai, this entry was chosen as the overall Student Design of the Year.

The winning entry was by Zhang Jianyu and Chai Peisen of Yanshan University,
tutored by Chen Guoqiang.

One of the judges put this entry as the first choice because it was a “good interpretation of a future Mercedes-Benz design language.” Another added, “A dramatic design theme, with well-developed forms.”

The award went to He Shengfan, who is being tutored by Jiang Lijun and is studying at the South China University of Technology

“It really solved the project brief,” said one judge about this entry. “It’s a cute and bright idea.” Another commented on its “clever and friendly image, especially for a truck”.

The winners were Wu Yulian and Liu Kefeng, tutored by Yan Yang at Tsinghua University.

One judge said: “It’s fluid and watery - an infinity style”, while another liked the “luxurious innovative wood interior”. A judge who put this entry in first place said simply: “It’s a fully-resolved design, inside and out.”

Best Design in Harmony with China’s Heritage sponsored by Lear

This award requires students to attempt to capture the essence of China within automotive design, and is always a tricky one to judge. The prize went to Su Ao, tutored by Liu Long at Tongji University.

“Chinese silks, calligraphy and opera masks are reflected in the twisting interior frame,” noted one of the judges. “It has a light, intricate feel like a lot of Chinese detailing.”

“I love the concept of the twisting knot that translates into vehicle language,” said another.

A team of three (the maximum size allowed) won this category. They were Cheng Yongsheng, Zhou Mingguang and Zhang Lei, and they carried off the second award to be won by students tutored by Chen Guoqiang at Yanshan University.

One of the judges commented that this is “a car for the survival of the human race. An interesting story with out-of-this-world aesthetics.”

As well as designing and producing the trophies handed to students on the night, awards sponsor Bose also donated one of its headsets to each winning entry.

The award went to Yang Junkai studying at the Changchun University of Technology under the tutelage of Chi Ruifeng.

The judges liked the all-terrain characteristics of this winning design which, said one, solves the need for multiple vehicles. “Practical and well-conceived,” said another.

The winning design was by Yu Shupeng, Chen Rui and Zhu Zhenghao, tutored by Huang Ruiyuan at the Sichuan Fine Arts Institute

One judge liked the fact that “the powertrain is well thought through and integrated with the overall concept,” as well as praising the interior, which might be a home for months in the tough life of a long-distance truck driver in China.

This design is a “considered yet exciting solution,” said another. “A believable future step for Volvo.”

Huang Wei, tutored by Huang Shiqun at Shanxi University, won this award, with one of our judges commenting on “the immersive relationship of man & machine,” in his design, so that “both virtual and real worlds overlap and take on new possibilities.”

Another judge summed it up: “The virtual driving experience.”

Unable to squeeze other excellent entries into their list of winners, the judges wanted to give further acknowledgement to one of the beaten finalists, and presented a Highly Commended certificate to the entry of Li Xiaoxing, who is studying at Guangdong Ocean University and being tutored by Han Weiguo.

The 2014 Car Design Awards China contest will be open for entries in the Fall this year, with presentation of the Awards made in Beijing just prior to next year’s auto show.

Our next awards event will be the CDN Interior Motives global student design awards, which will culminate in an announcement ceremony in Frankfurt on 9 September during the auto show.