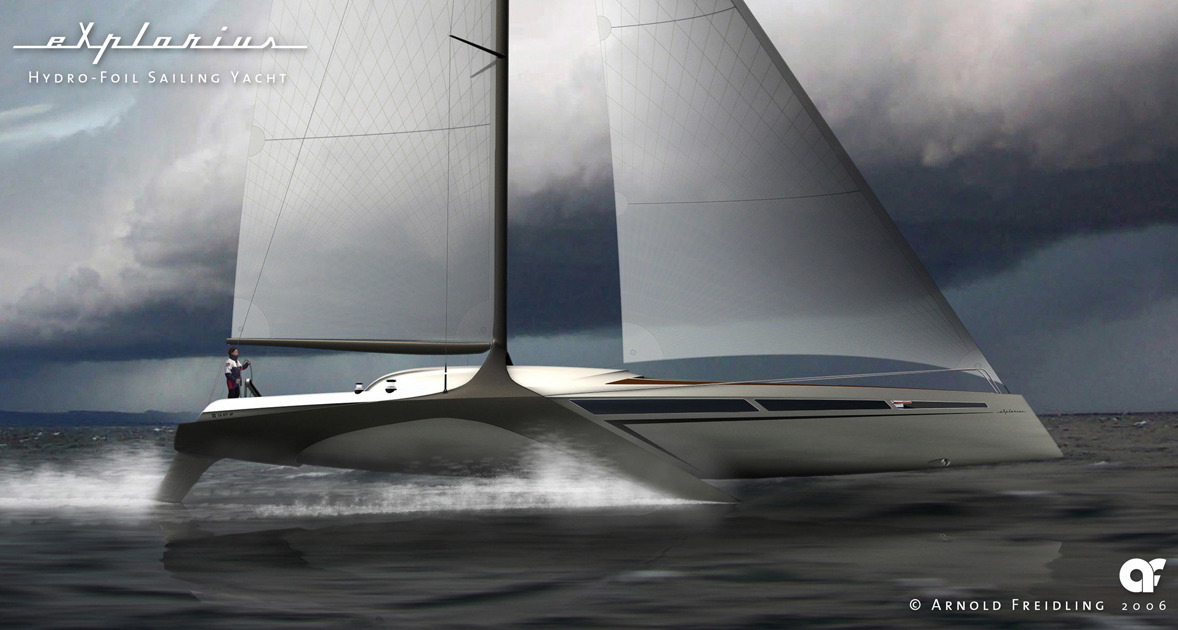 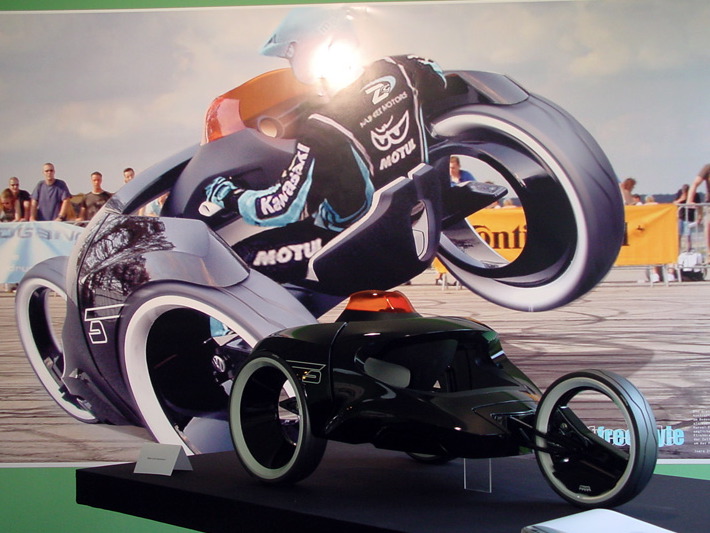 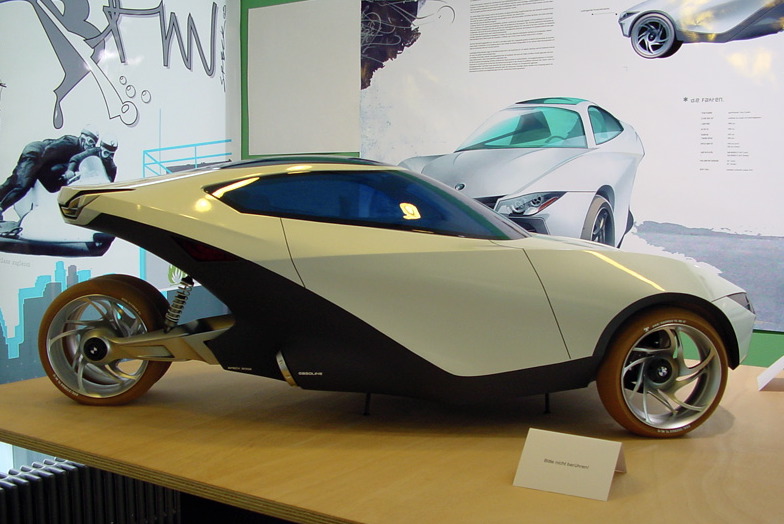 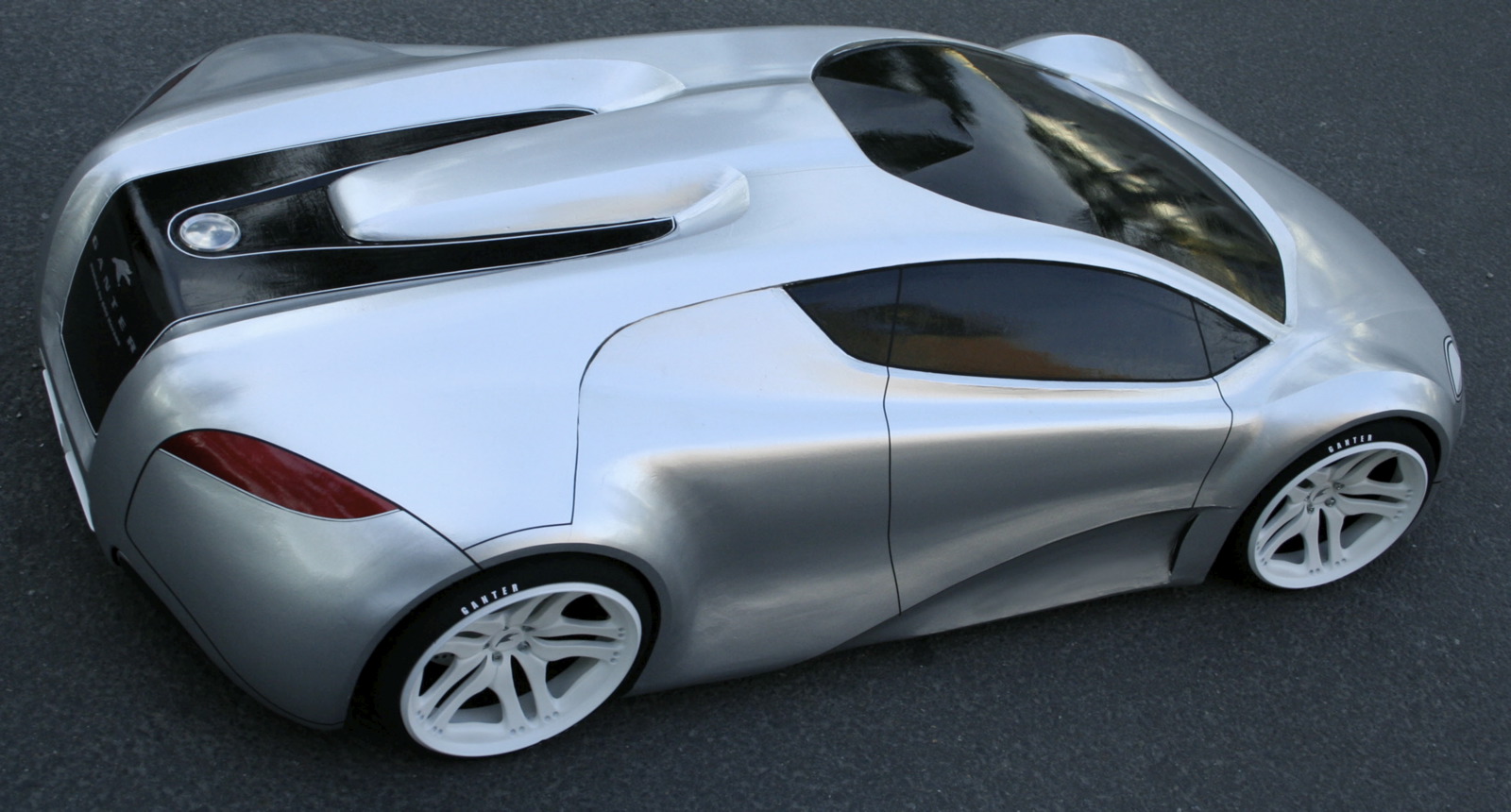 Transportation Design students from Braunschweig University of Art in Germany presented their work at the 2006 graduation show held in July. The show displayed final thesis projects as well as internship and sponsored projects from the last term. 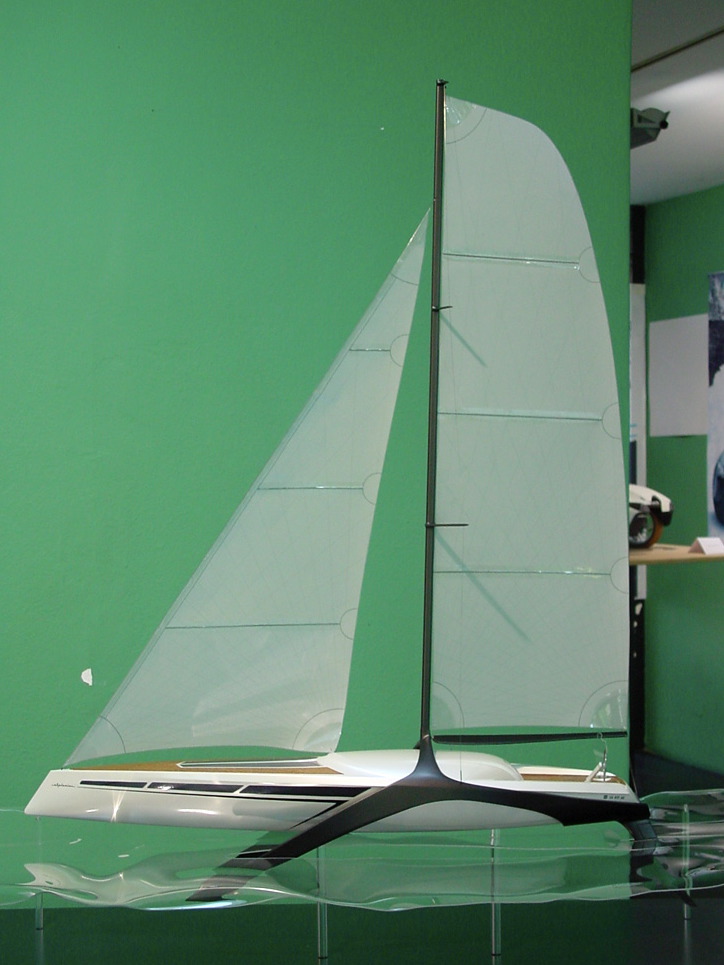 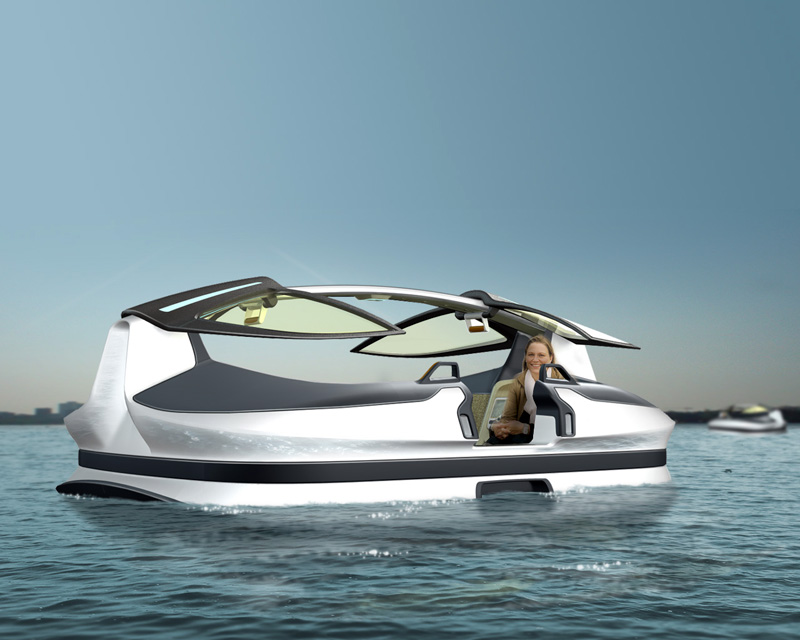 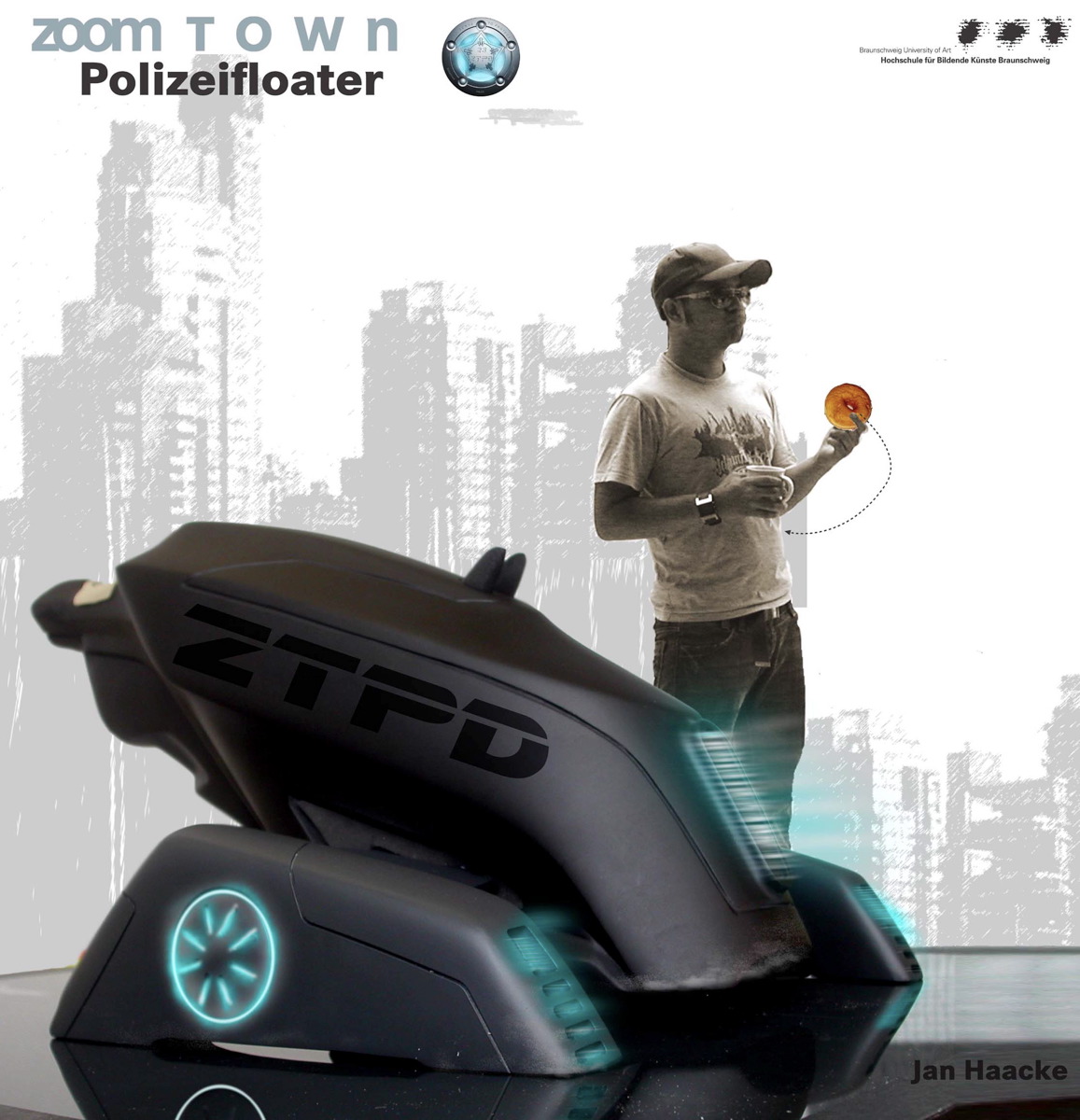 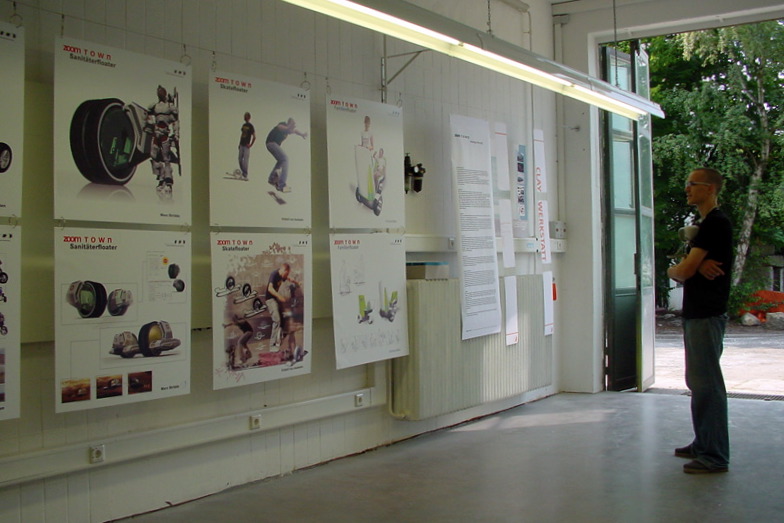 This mobility concept introduces hydrofoil technology into the sailing yacht class and presents an innovative approach within the traditional sailing yacht field. At wind speeds of 10 kn and more the underwater wings lift the hull of the eXplorius yacht out of the water and thereby reduce the friction and displacement to a minimum. By gliding over the waves at sailing speeds of up to 32 kn this yacht makes transatlantic trips for 2-6 'maritime jetsetters' possible.

Joern Zirfass proposed a three-wheeler for drivers who want to enjoy a controlled curve drift. Three wheels stick to the ground while speeding straight on, while only two tires touch the concrete while drifting through sharp curves. The driver shifts himself on a sliding seat-interior-unit from left- to right, trying hard to keep the vehicle on the ground. The lightweight sports vehicle provides driving- and drifting pleasure for skilled drivers, who are interested in 'tricky-to-handle-vehicles' - such as quads or motorbikes. Powered by electric motors located within the wheels, the three-wheeler could enhance Volkswagen's range of models with a prominent fun vehicle, that promotes the brand either in special competition scenarios (as Lupo Cup) or by standing out when quickly moving through the city.

The Urban Jungle Car is an entirely new vehicle concept which was designed as an answer to the new requirements of modern und future mobility, where a car will be more than simply a car. For this reason, the proposed concept does not reflect an automobile in the classical sense, but rather presents itself as a crossover between a city coupe and a sidecar. Starting from an asymmetrical layout of a sidecar, the new concept presents a closed 1 plus 2 seater designed for the urban enviroment. The rediscovery of the sidecar characteristics is seen as an homage to the BMW sidecar-heritage both in the details of the interior and the exterior. Thus, asymmetrical detail solutions are present throughout the concept. The lines of the exterior were inspired by the graffiti art of metropolitan surroundings.

The exhibition also included internship projects, a project made in collaboration with a sports car manufacturer, and an urban transport project.

The Czech Republic has an interesting landscape with a lot of possibilities for hiking, climbing, mountain biking, kayaking and skiing. The concept of this car is a sport-combi which is able to carry the things you need. The side graphic and the 3D shape of the back are like a backpack to reinforce the load-carrying character. it is based on the package of the Skoda Octavia but a little higher to better suit to the street conditions.

In powerboat racing heavy accidents happen very often due to lack of stabilization.This futuristic scenario shows a boat equipped with stabilizing wings.The concept was inspired by the Star Wars Podracer, giving the boat the racing feeling of being pulled,where the ancient race chariot served as an analogy. Two pod engines have the advantage of making the vessel more efficient in fuel consumption and in reducing vibration.

The sports car was developed with a private investor as the client, who is aiming at a limited production of 333 cars a year. A design direction was chosen and had to be worked around the package that had been given. The Audi 4.2L with 650 PS will be the engine and drive train on which the concept will be based. Six designs were developed and modeled in clay. Looking at marine life and other organic forms as an influence, Bjorn Wehrli's concept is a strong muscular looking vehicle, that still has a soft and flowing underlying design theme.

Zoomtown
Visions and design concepts for the future city

Students designed small vehicles for inner city transportation in the future. The projects were based on the vision 'Zoomtown' by Peter Haimerl, which describes a possible future of mobile life in which the european mega-cities keep on growing whereas suburbia and the countryside are in decline. In these cities the traffic is constantly developing a new look. Individual traffic emerges through a variety of different electro-vehicles - the Floaters. The Zoomtown project was supervised by Prof. Dr. S. Rammler and architect Peter Haimerl.