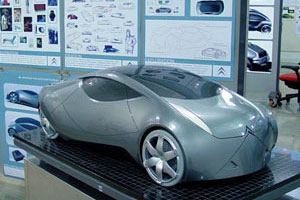 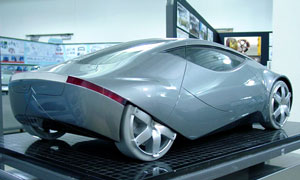 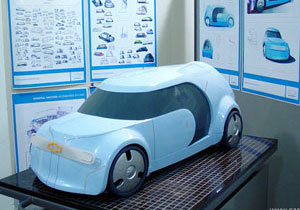 Jul 20, 2004 - On the evening of May 14th, Detroit's College for Creative Studies opened it's 79th Annual Student Exhibition with a patron preview. The entire campus was transformed into a gallery to display works by many of the year's students.

The CCS Student Exhibition is one of Detroit's major cultural community events. Work including jewelry, paintings, photography, sculpture, furniture, ceramics, and textiles was for sale and was available for viewing through the month of May. Proceeds from the sale of art go directly to the students, while ticket sales and sponsorships benefit student scholarships.

In the Transportation Design exhibition, a variety of both sponsored and individual projects were available for viewing. This year's senior class project was sponsored by General Motors and was based on a 'Version 2.0' of the skateboard-like Autonomy chassis. The Junior class was asked by ASC to consider the next generation of 'open top' vehicles, which is where that firm's roots lie. French manufacturer Renault engaged another group of CCS students to design 'The Next Big Thing', a look at the possibilities for transportation in 2010. Also on display were an array of projects from the Industrial Design courses, including packaging, product, furniture and interior design.

The Senior Class project was already introduced to CDN readers in an earlier story: GM Autonomy 2020 , but it's an intriguing project, and definitely worth another look to focus on some of the designs not presented earlier.

Amina Horozic's vehicle has was based on the notion that, 'Parenthood is Evolving'. She designed the vehicle from the inside out, with the idea that the vehicle has replaced the family dining table as a place to converse and interact. She states, "In a category of its own, this family vehicle would provide all the functions of the minivan with a rather unique and individual style. It is aimed at young families who strive to stand out in a crowd and escape the stereotypes and connotations associated with the current minivans and their drivers." The overall proportion of the vehicle is of a panel truck from the 50's modified into a chopped top lowrider, but the forms and detailing tell a much different story. Safety is obviously in mind with tall body mass and lots of sheetmetal giving it a protective feel, but it also has expanses of glass in the rear hatch and in a dramatic swoop on the side that provide both a daring exterior design and unique interior view out into the world. The body shape mixes both organic and geometric forms in a way that feels like skin over bones. Amina reveals, "I looked at a lot of fashion. I wanted to capture that same emotion and feel that like the fashion brings in to, when you see the shows, into a vehicle. So I looked at French houses of design like Yves Saint Laurent, Jean-Paul Gauthier and they have really bold and flamboyant, really extravagant designs of their fashion and I wanted to capture that same feeling in it...the car surfaces look like they are draping over the structure, like cloth drapes over your body." Graphic elements mimic the overall forms in that there are both flowing lines and geometric elements present. The final piece of her effort is the floating light bar at the front, with it's oversized Chevy logo, which puts a modern spin on the way headlights used to be a separate element of a car's overall design.