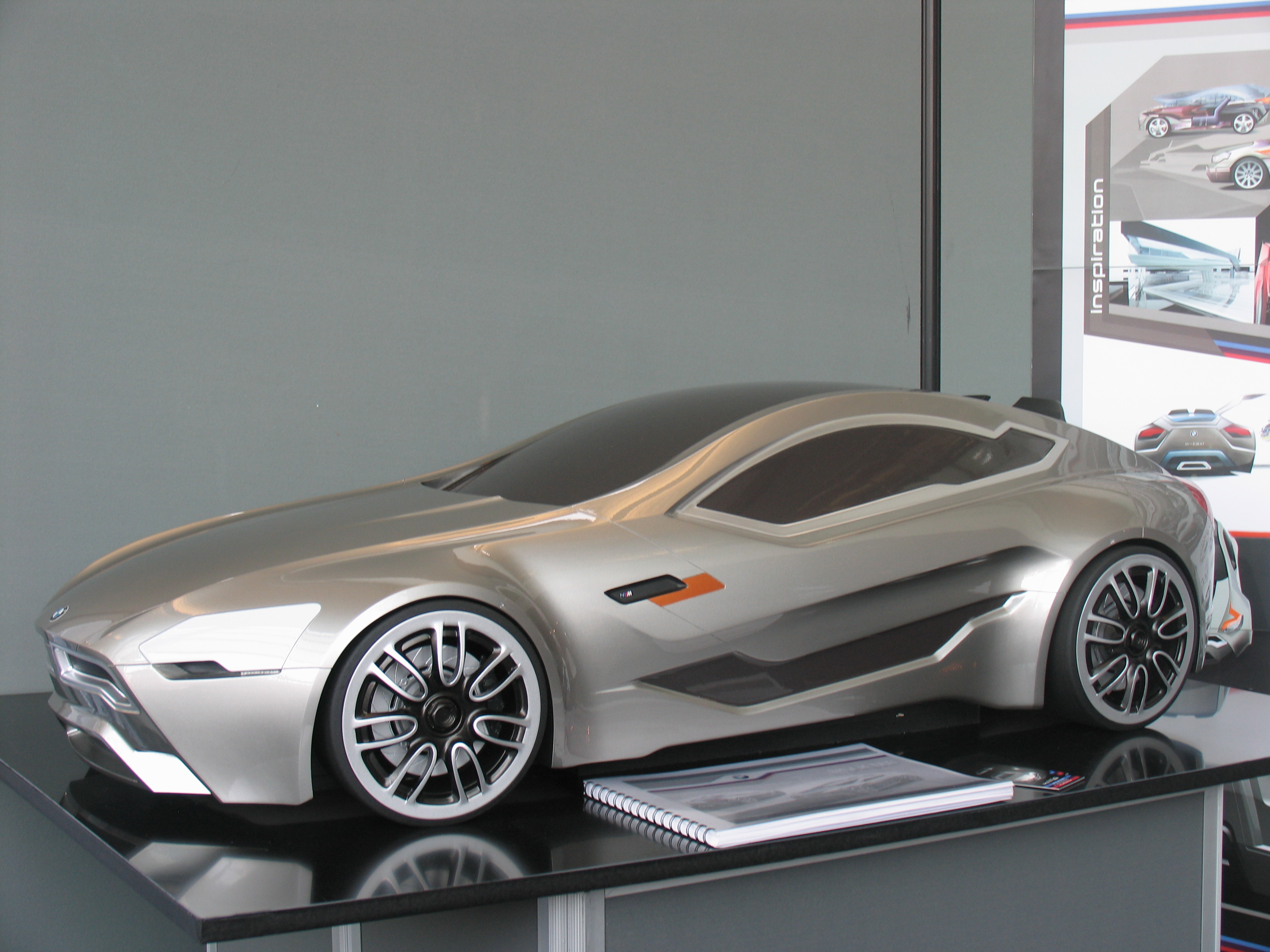 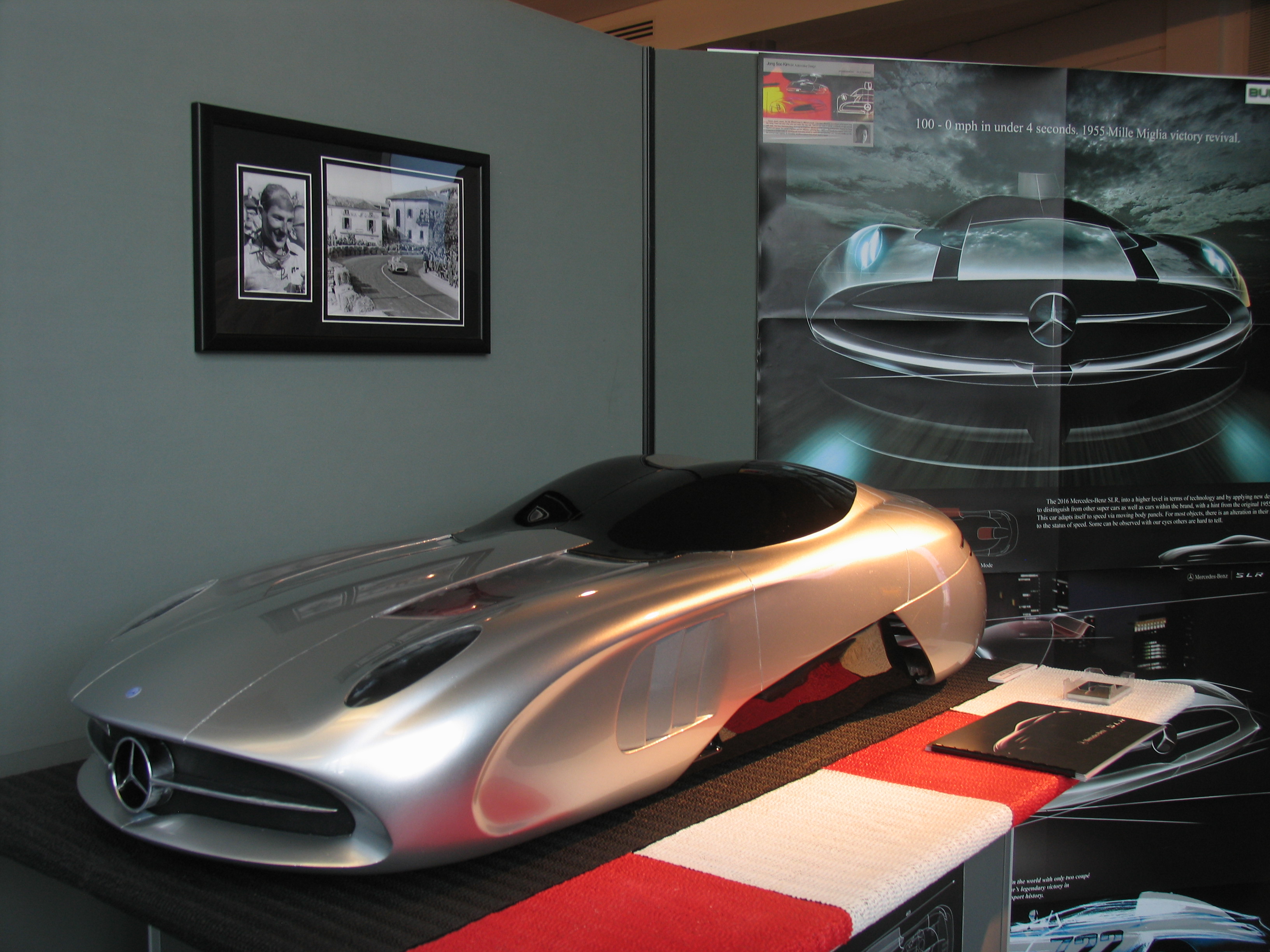 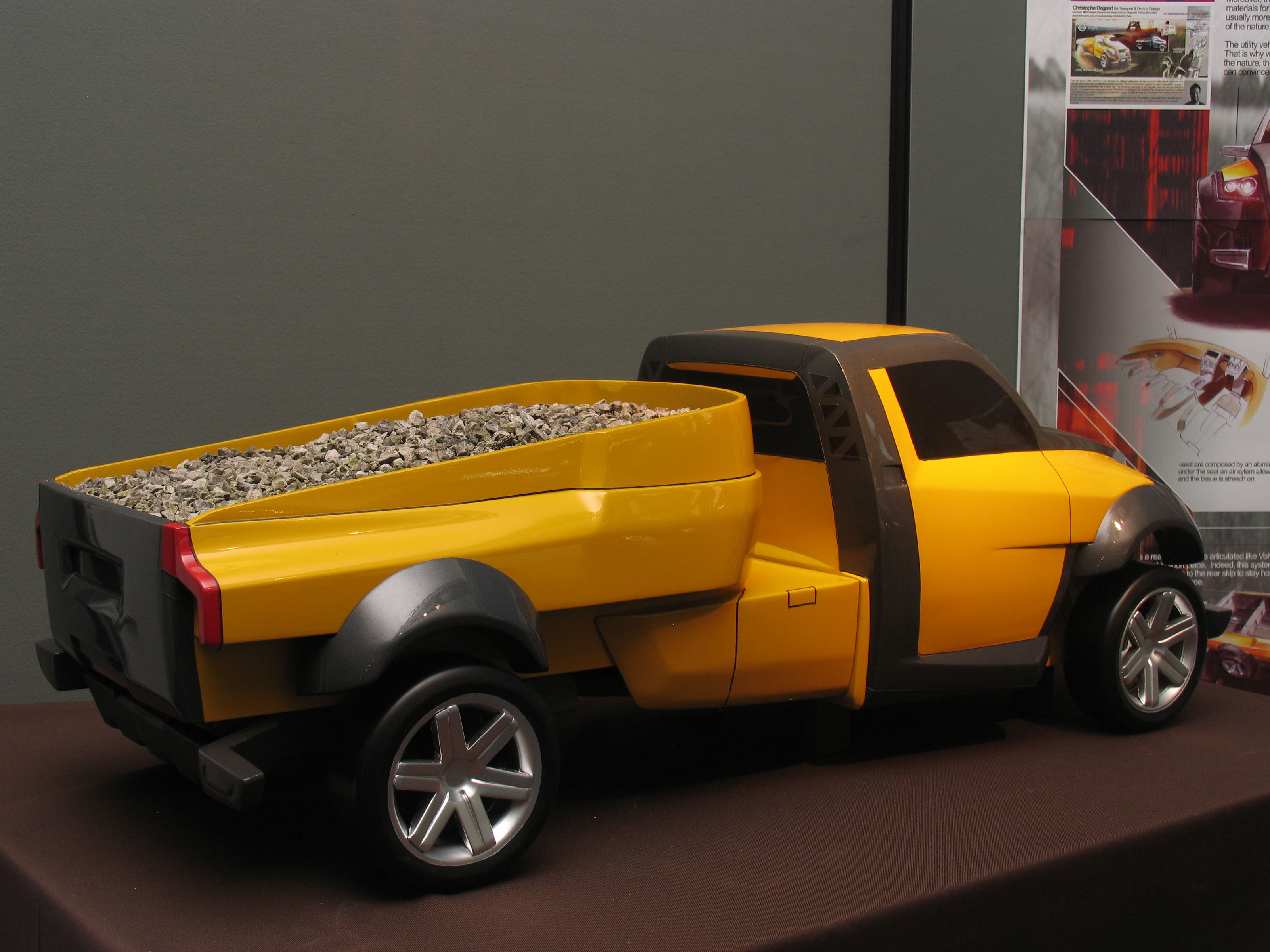 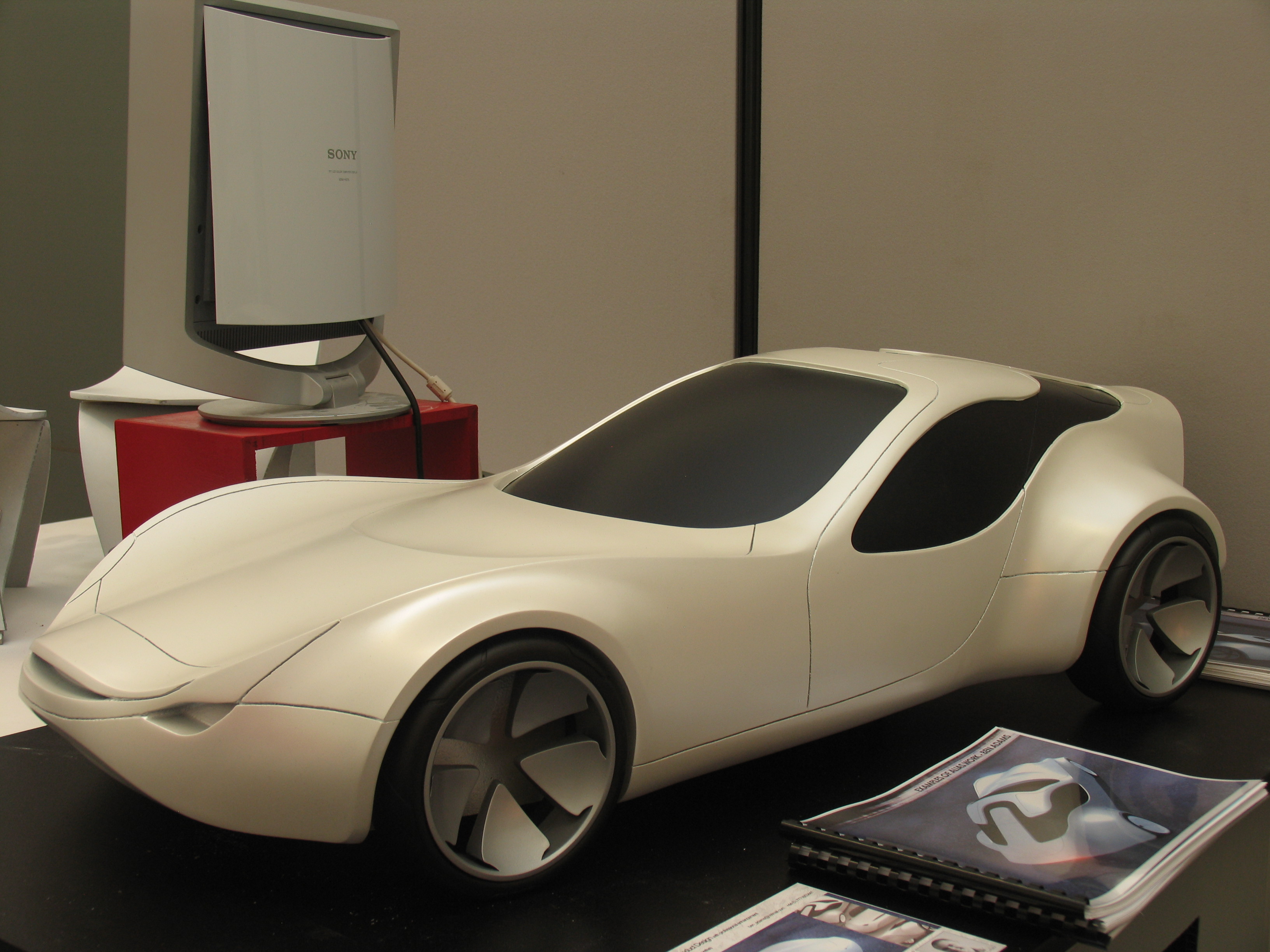 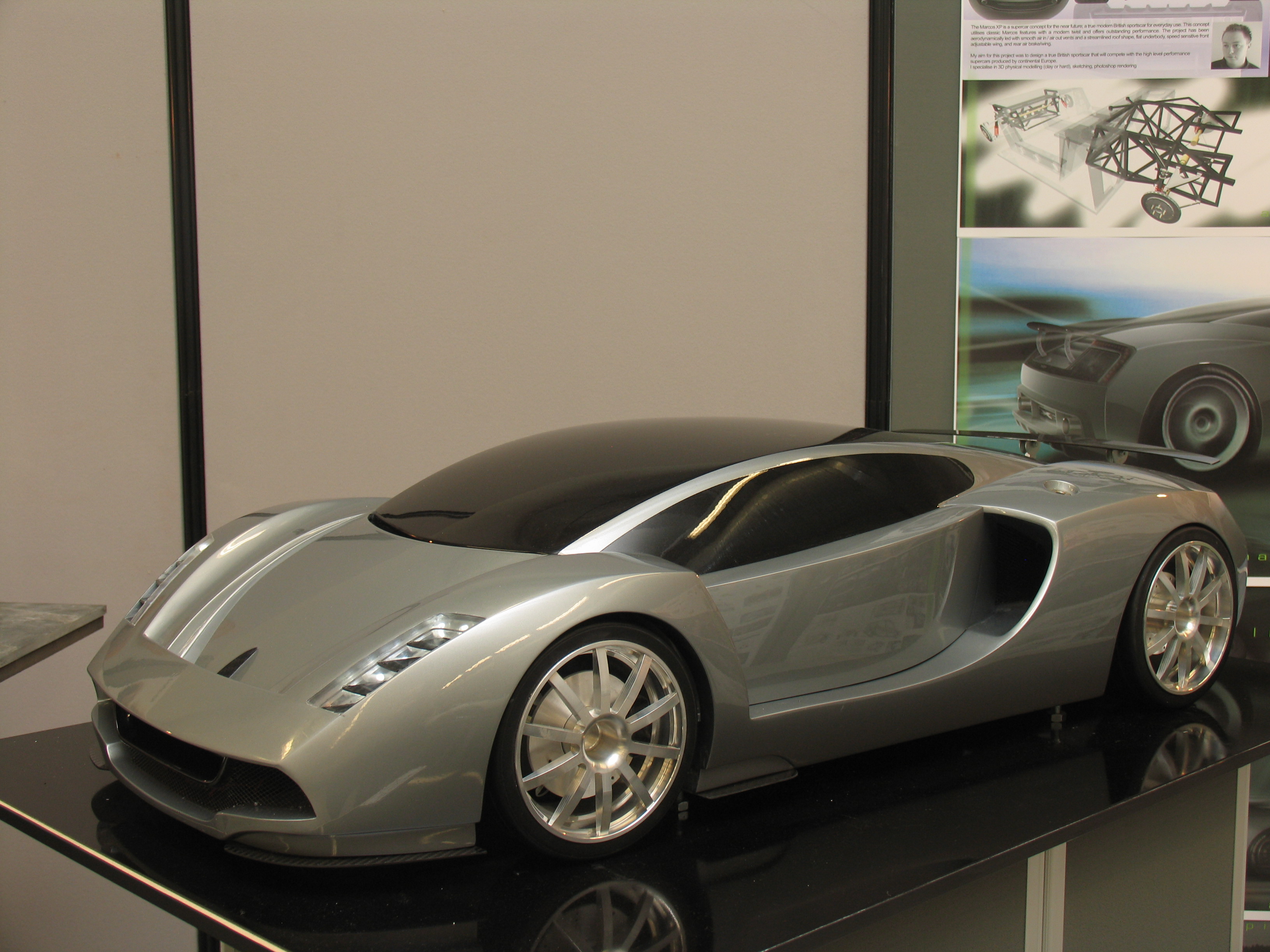 Niki Yau's BMW M-taxi was an interesting counterpart to the recent concept car by Israeli architect Zaha Hadid. It takes a BMW M5 platform and rebodies it as a replacement the current M5 Ring-Taxi which is used on the Nurburgring to entertain clients. The style and graphics are inspired by Hadid, who designed the recent Leipzig factory for BMW. "Zaha Hadid uses dynamic, geometric forms with hard edges and sharp intersections. In essence, this is the opposite of current BMW design direction" explains Yau. The big gullwing doors have a lower glass panel that allows a dramatic view of the track for the four passengers. The idea would be to produce a limited series of corporate event cars to reinforce the 'Freude am Fahren' brand values of BMW. 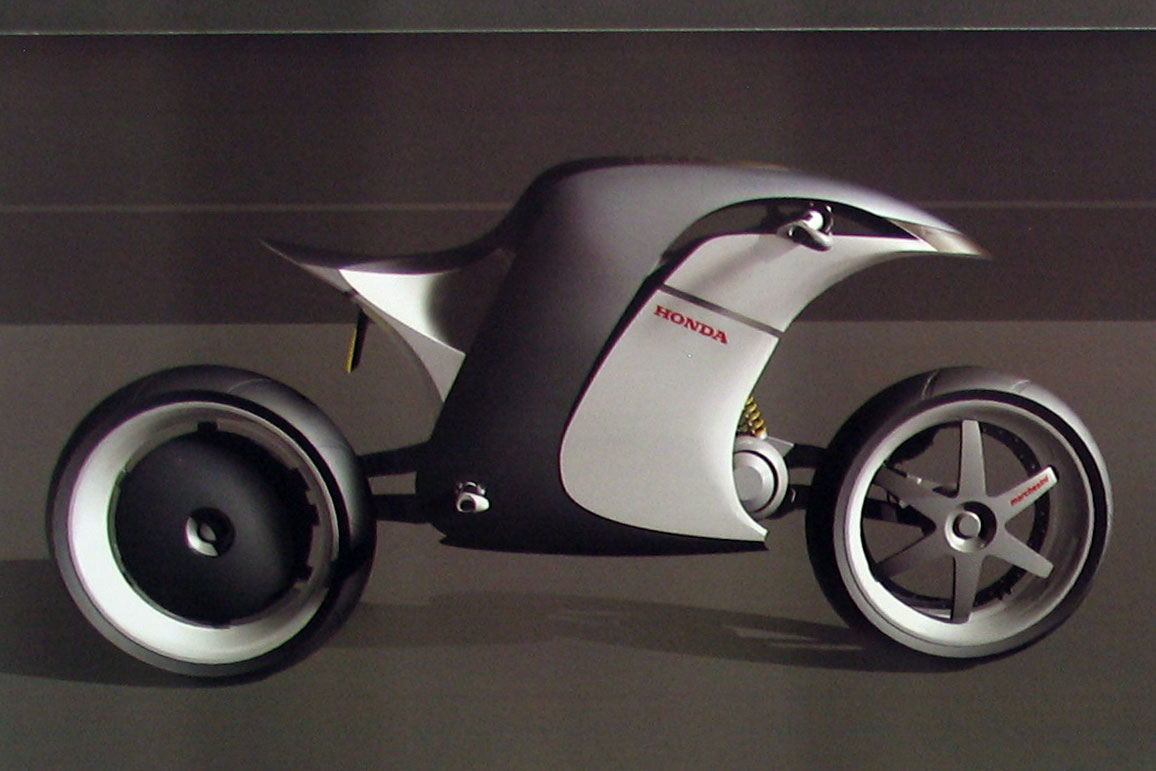 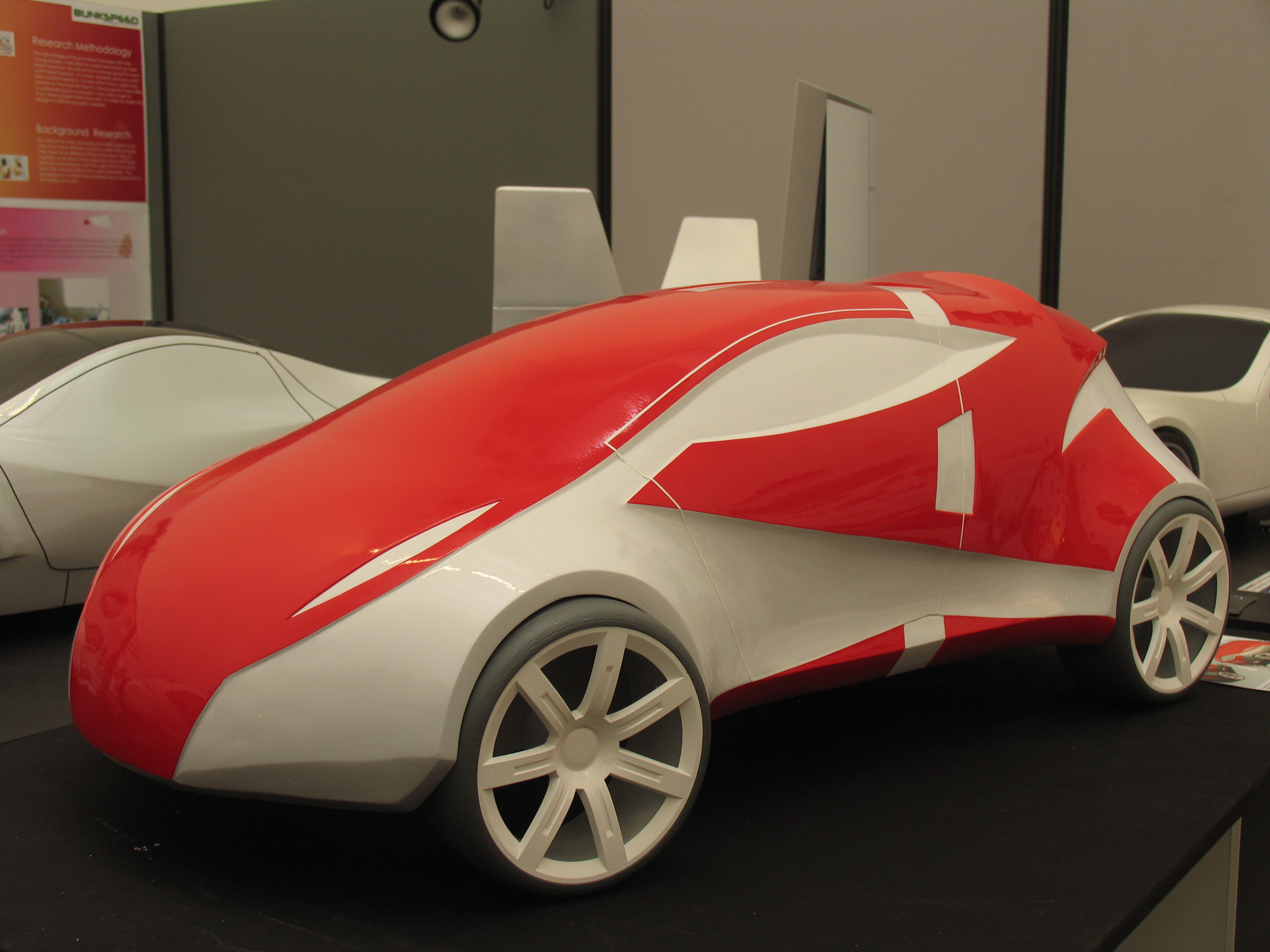 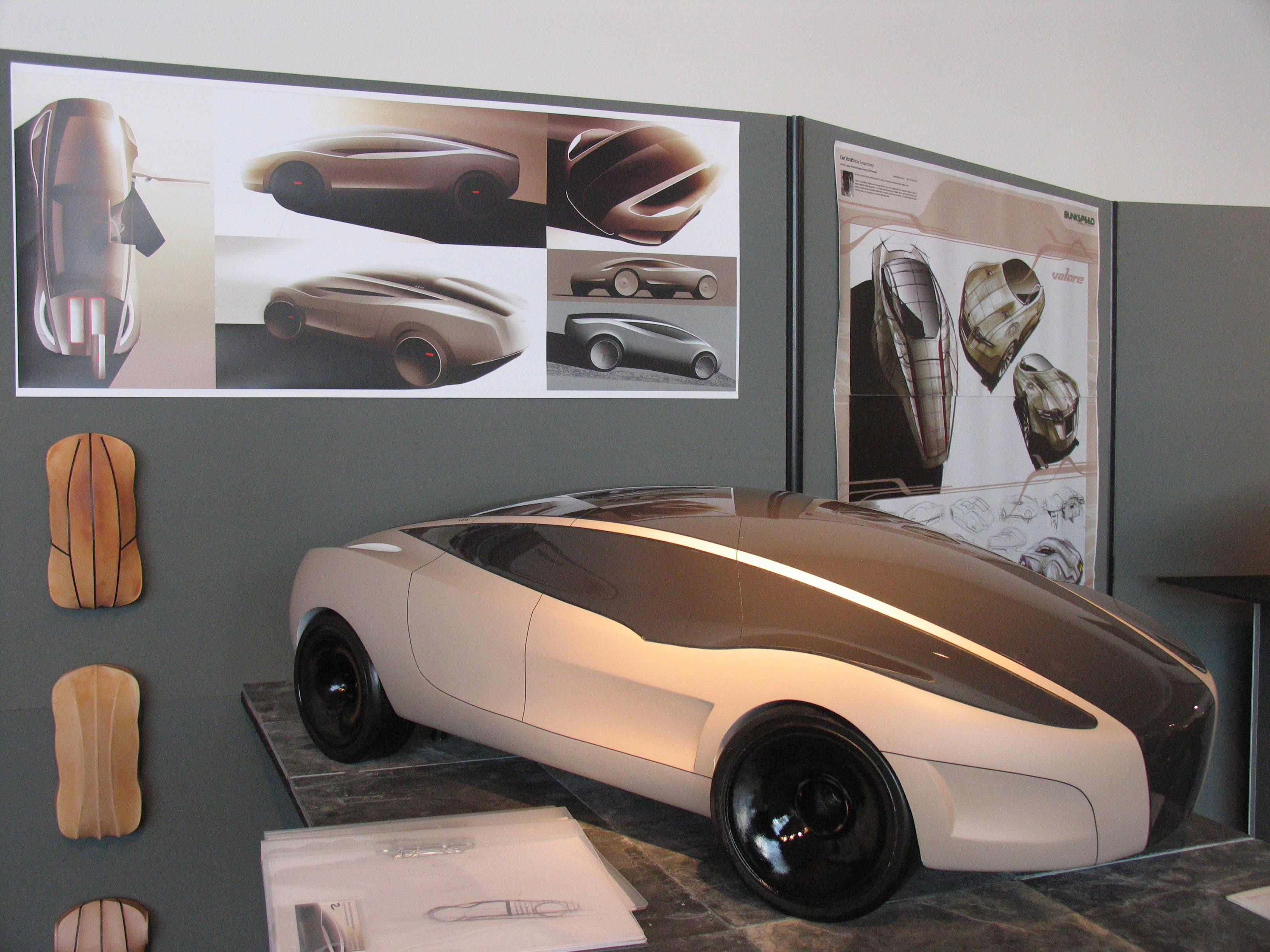 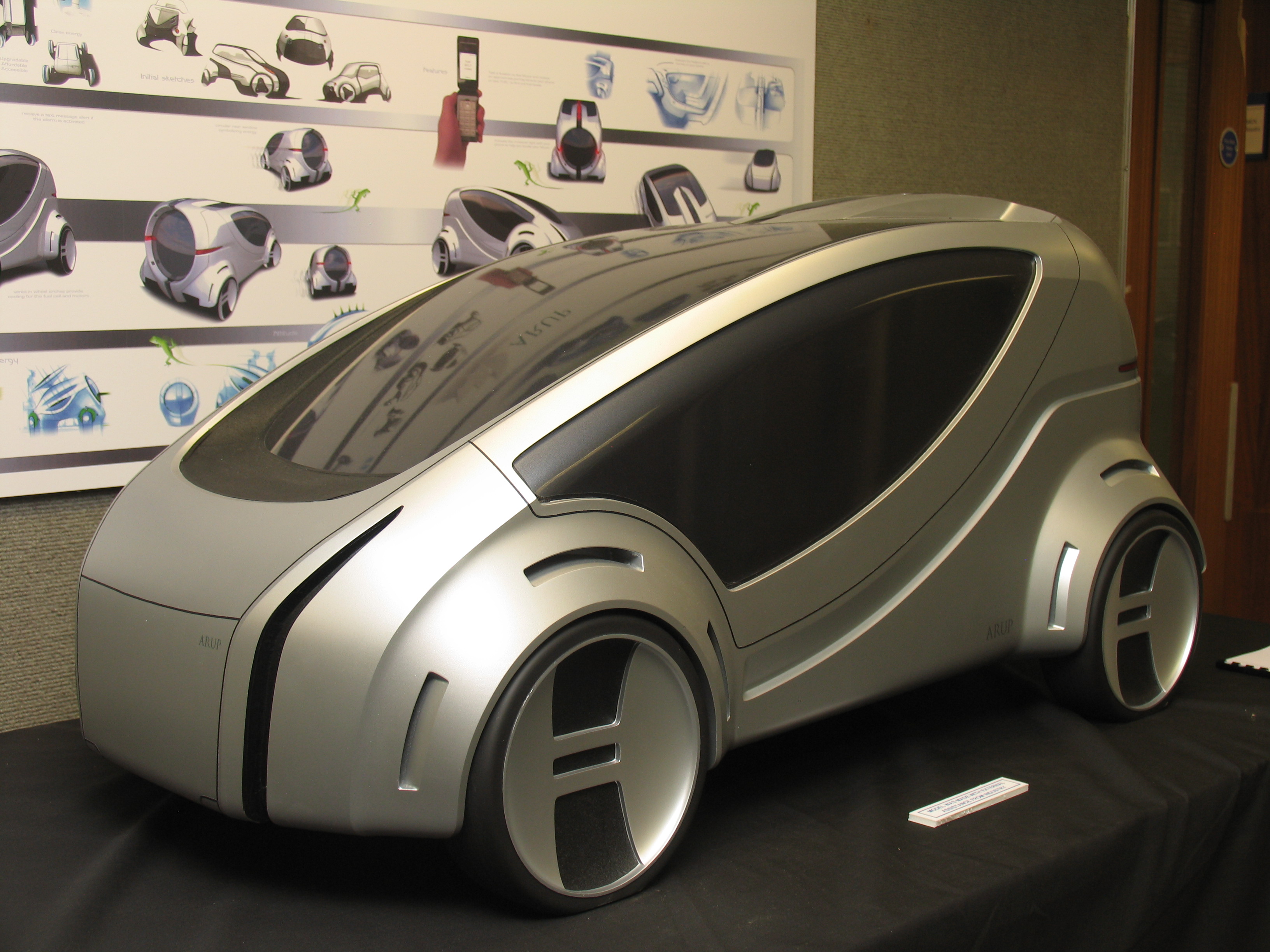 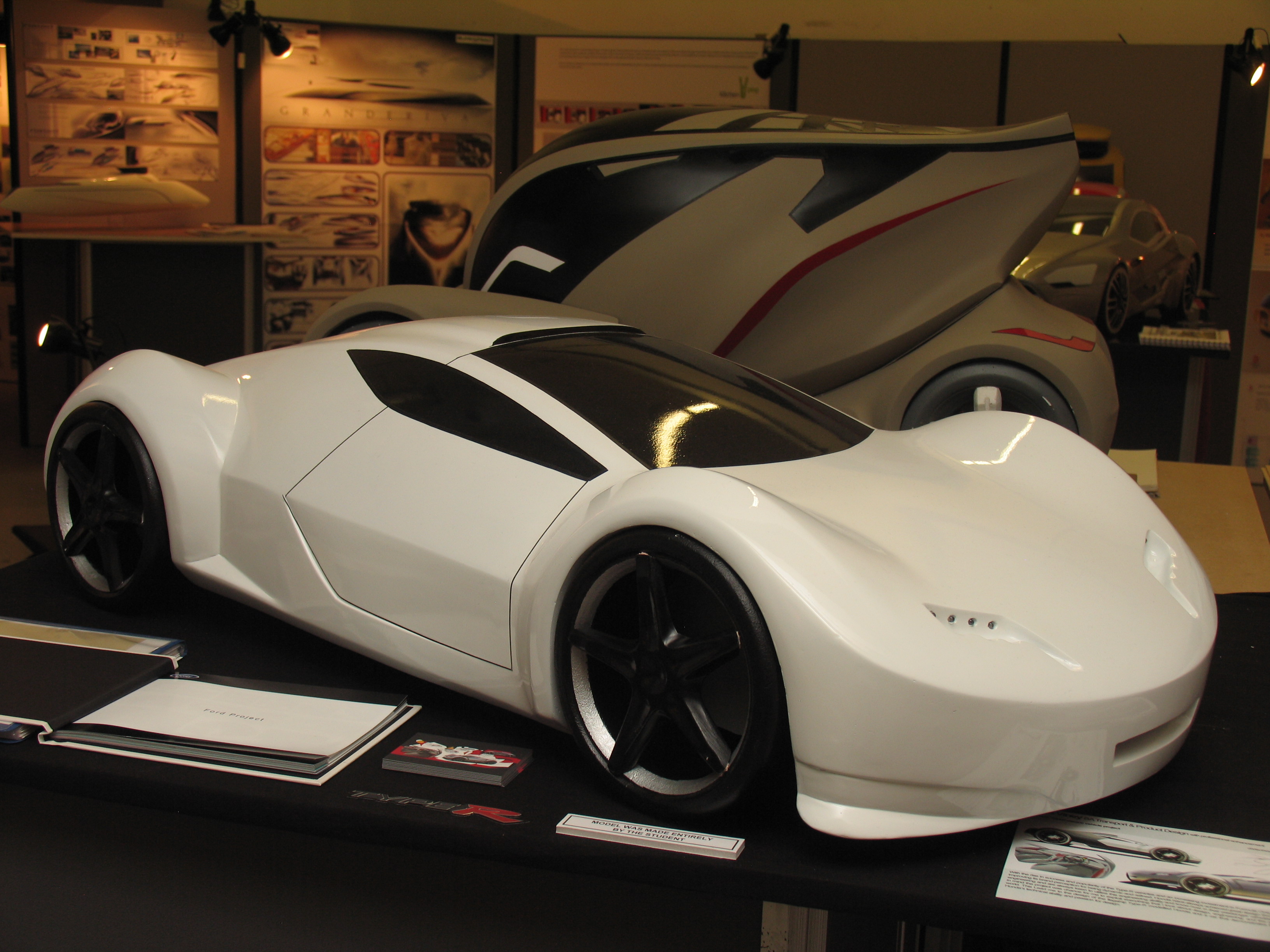 The original 1955 'Uhlenhaut Coupe' Mercedes SLR was the inspiration for Jong Soo Kim's 2016 Mercedes SLR concept. He explains that "this car adapts to speed via moving body panels as, for most natural objects, there's an alteration in shape according to the status of the speed. Here, the front fenders move out 200mm for enhanced cornering and braking control and provide a visual clue as to the car's approaching speed". The 2-seat front midship layout uses soft flowing forms and enclosed wheels to give it an initial retro-look, but offsets this by using black graphics in the lower half of the big gullwing door to visually extend the body down around the wheels to give a more advanced, mysterious look to the car. It's an interesting counterpart to the recent BMW Mille Miglia concept shown in May that harks back to an iconic sports car from the past and reinterprets it for tomorrow.

French-born Christophe Degand's xr150 project was a new type of 3-seater utility vehicle that's a cross between Volvo articulated haulers and a pick-up truck. It merges Volvo car design cues such as the prominent shoulders surfaces and a bluff nose with construction equipment toughness, while the interior makes use of bio materials such as hemp and recycled materials.

Ben Adams research centered on emotional attachments to cars. The bodyforms and soft graphics were inspired by seashells, fossil patterns and bone structures. With cab rearwards proportions not unlike an early Marcos or Datsun 240Z, the concept uses a GM-type skateboard chassis powered by fuel-cells. The interior features reclining seats and a vast cinema-type HUD display on the windscreen.

Another Marcos-inspired project was that of Ryan Ennion. His Marcos XP is a proposal for a larger midship sportscar following an internship with the company last year. Although the result is conventional in form, the model was very professionally finished and the design was aerodynamically-led, with a flat underbody, smoothed airflow into ducts and a rear airbrake. The big extended front fenders feature an outlet airfeed to the rear intakes, smoothing air past the inset center tub of the car.

The school has a great deal of support from the car industry through sponsored projects and regular visiting lectures, particularly from alumni designers now working within the various fields of Transportation Design, such as the local design studios of Jaguar, Land Rover and the GM advanced studio. In addition, the existence of many specialist sports car companies such as Aston Martin, Marcos, Noble, Ascari, GTM, Prodrive, and automotive prototype companies within the Coventry area means there is a wide range of possible internships and project collaborations available for students.

Further projects can be seen at the degree show website: www.covdesignshow.com