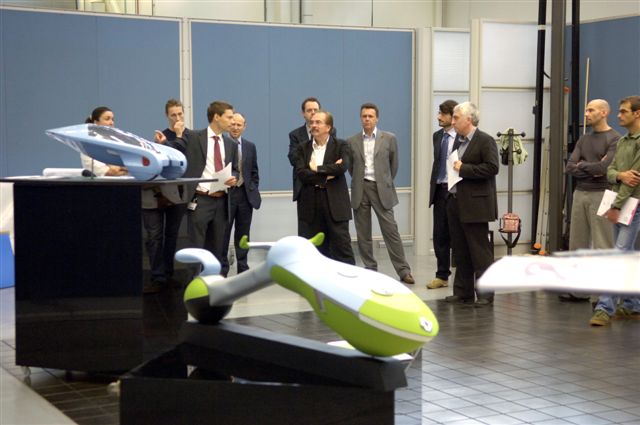 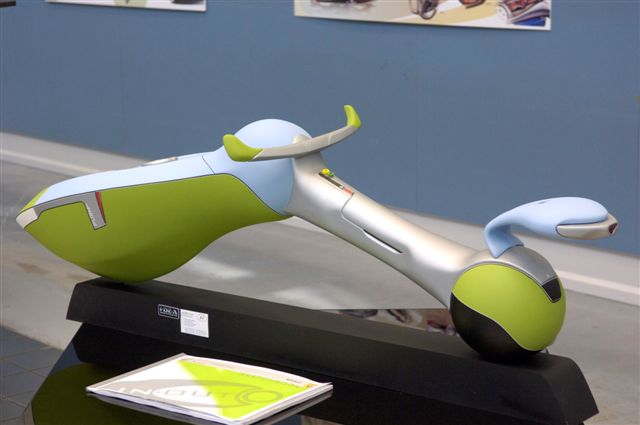 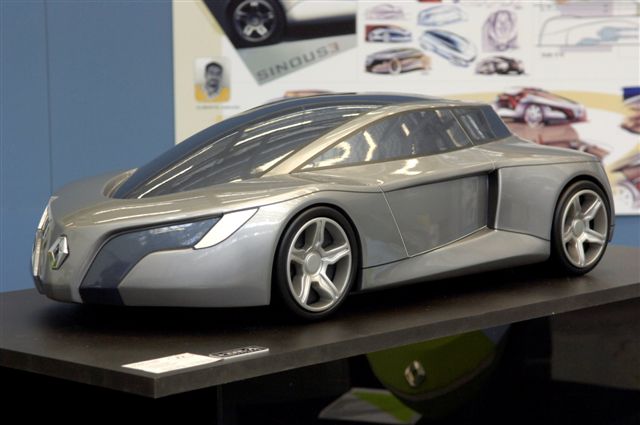 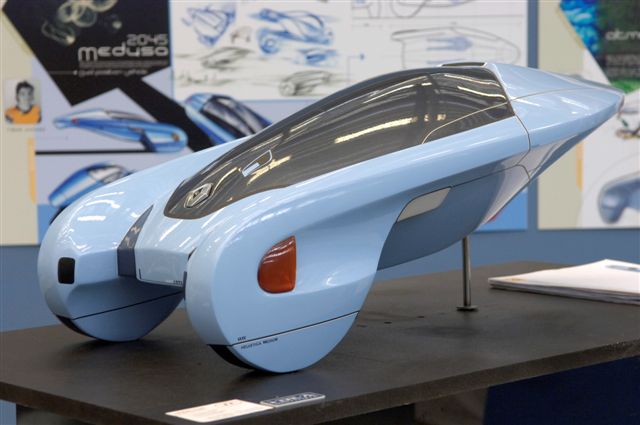 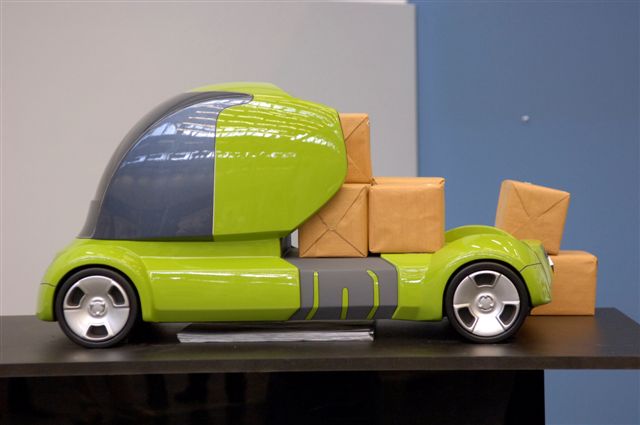 Transportation Design students at Istituto d'Arte Applicata e Design (IAAD) in Turin presented the results of a Renault-sponsored project with the theme 'My First Renault' in July. The students were given a fairly open brief to design a personal vision of a Renault vehicle of the near future. In addition to an exhibition in Turin, selected project work was presented at the Renault Technocentre to the directors of Renault Design. The students were assisted in the project development by Renault designers Louis Morasse (Design Director of Light Commercial Vehicles and Trucks), and Luciano Bove (Espace Design Manager), Massimo Barbieri and Stephane Maiore, along with Simon Grand, coordinator of the IAAD Transportation Design department. 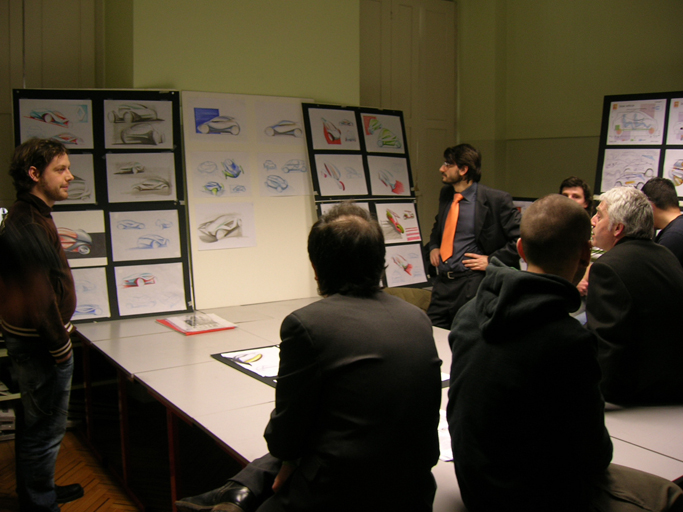 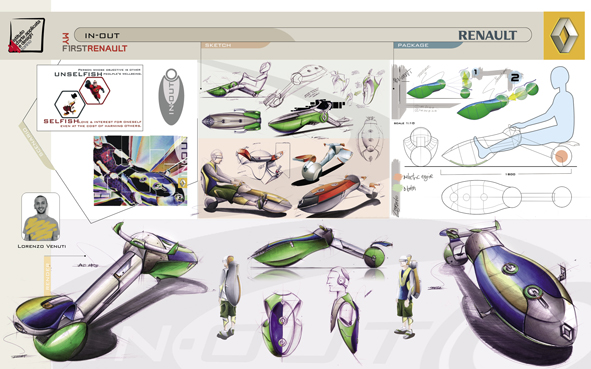 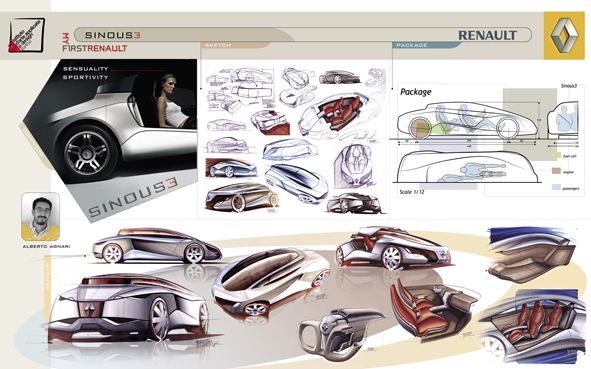 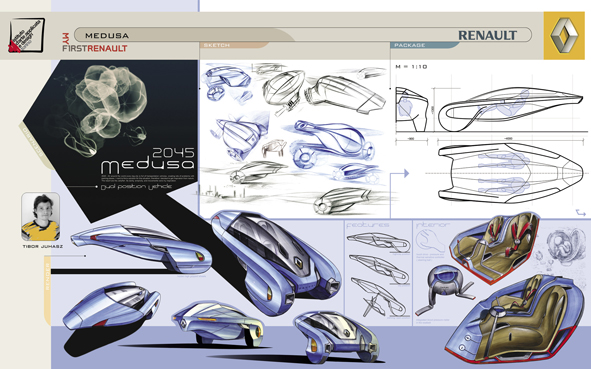 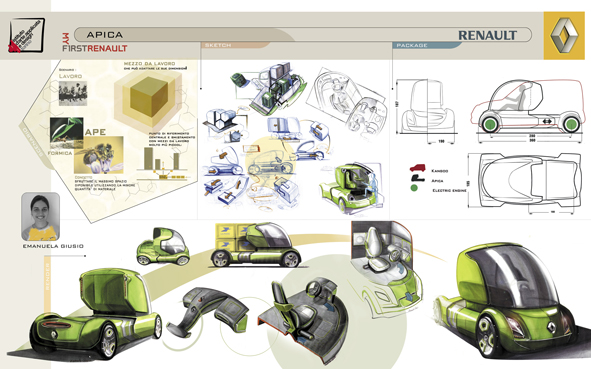 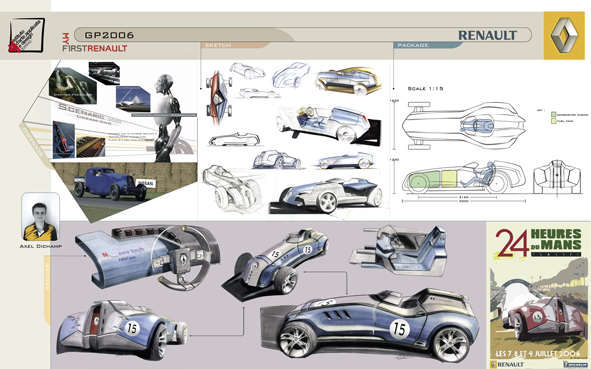 The projects presented at the Renault Technocentre included:

Thinking about a future when city centres will be closed to the car traffic, Lorenzo designed this personal mean of transport called 'In-Out'. With its electric engine, it does not pollute and allows for a light body, very easy to move and drive. When not in use, the rear part can be closed and pushed inside the main body, the handles taken off, so that you can carry it as a rucksack.

'Sinous3' is an elegant three-seat car. Alberto designed a car for a young target buyer, a sculpture that communicates elegance and style. A glass line runs all around the body of the car, creating a sort of light embrace on a strong but graceful structure. The side doors open like a pair of wings, leading to a comfortable interior that is linked to the sinuous lines of the exterior itself, made easier by the glass roof.

'Medusa' is Tibor's concept for 2045, inspired by the movements of a jellyfish. This is a two-seat future car, thought to be used in two different modes. In the motorway mode the car runs in the horizontal position, while in the city mode it runs in the vertical position, decreasing the speed. The door opens from the belly of the car to touch the ground. The seat is very comfortable and follows the movement of the car, in order to give the driver the sensation of floating on the road.

'Apica' derives its name from the bee and the ant ('ape' and 'formica' in Italian). Emanuela took these two insects as inspiration for this commercial vehicle. In the future, goods would be transported longer distances using an underground system, but on the surface Apica will deliver them locally. When the vehicle is parked it becomes shorter, while when it works it becomes longer to place all the goods, stored in magnetic packages designed specifically for the vehicle.

The Istituto d'Arte Applicata e Design Turin was founded in 1978. Over the last six years the school has been developing stronger links with industry. Companies that have recently collaborated for the final year thesis development include Fiat, Alfa Romeo, Lancia, Honda Europe, Renault, Ducati, Aprilia and Yamaha. Courses are European Bachelor and European Master of Science in Design (EABHES), as well as shorter enhancement courses for professionals.