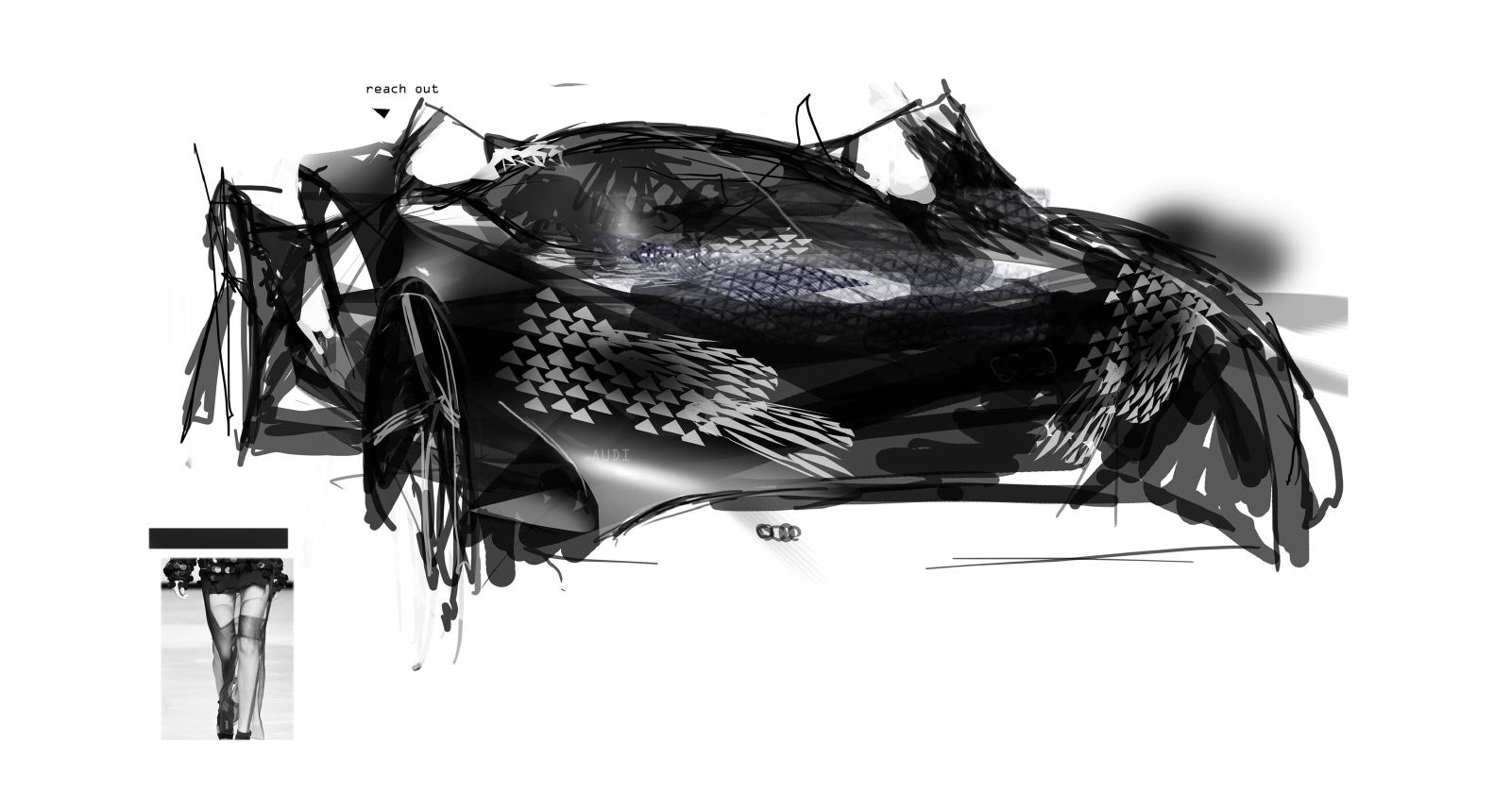 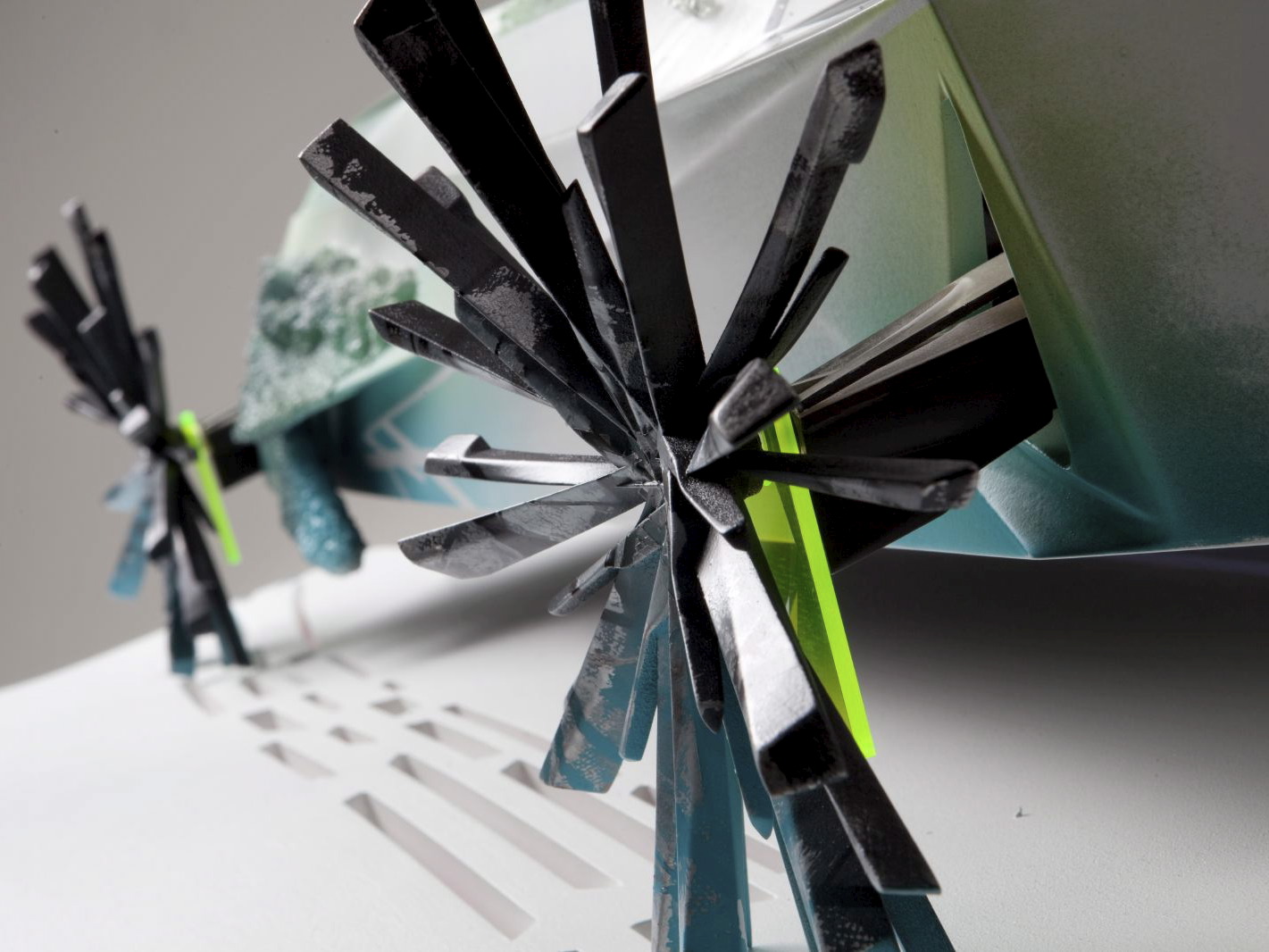 Etienne Giuga's work can be described best as artwork 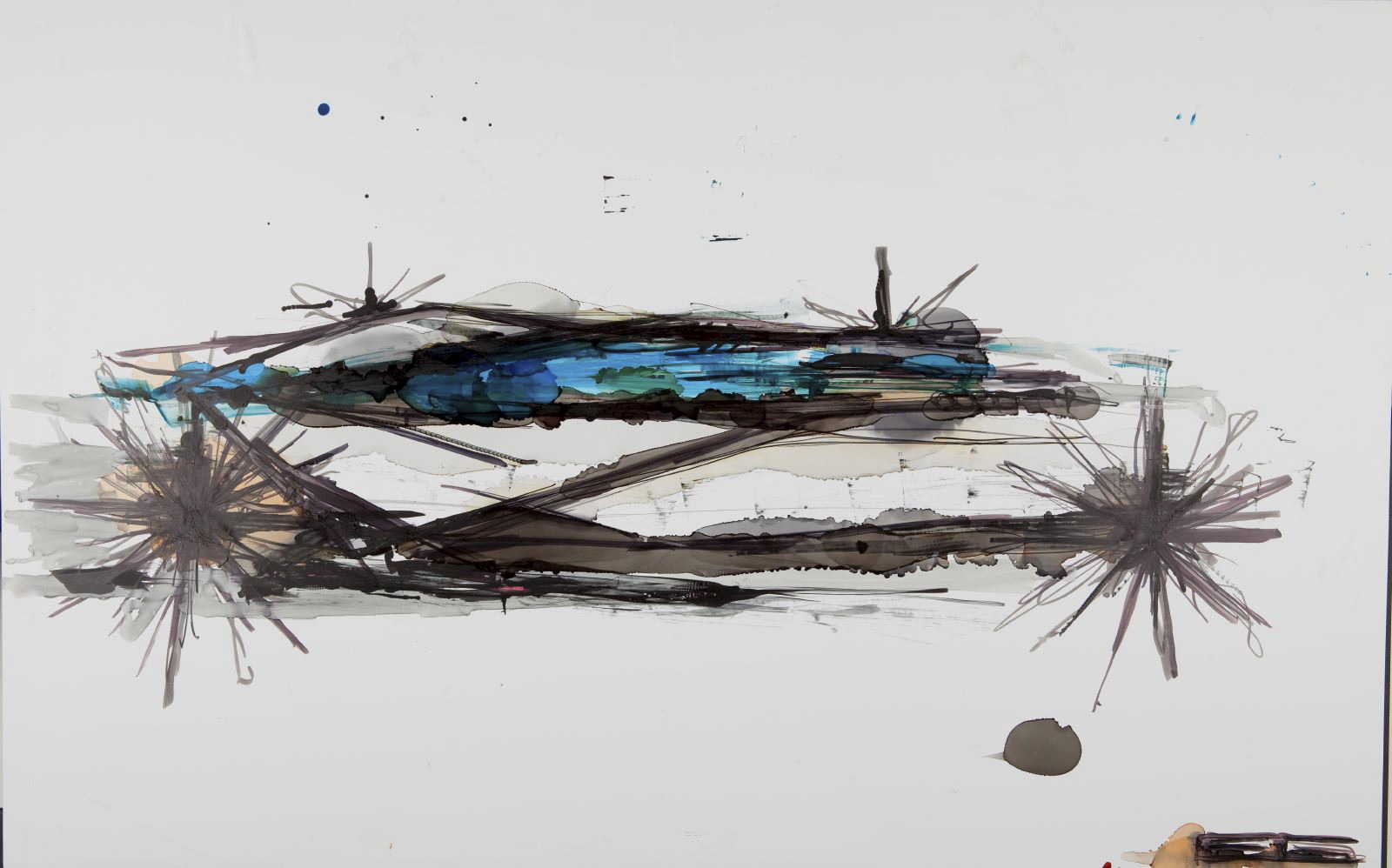 "The model keeps its history, it's not just washed off at the end of the race," according to Guiga 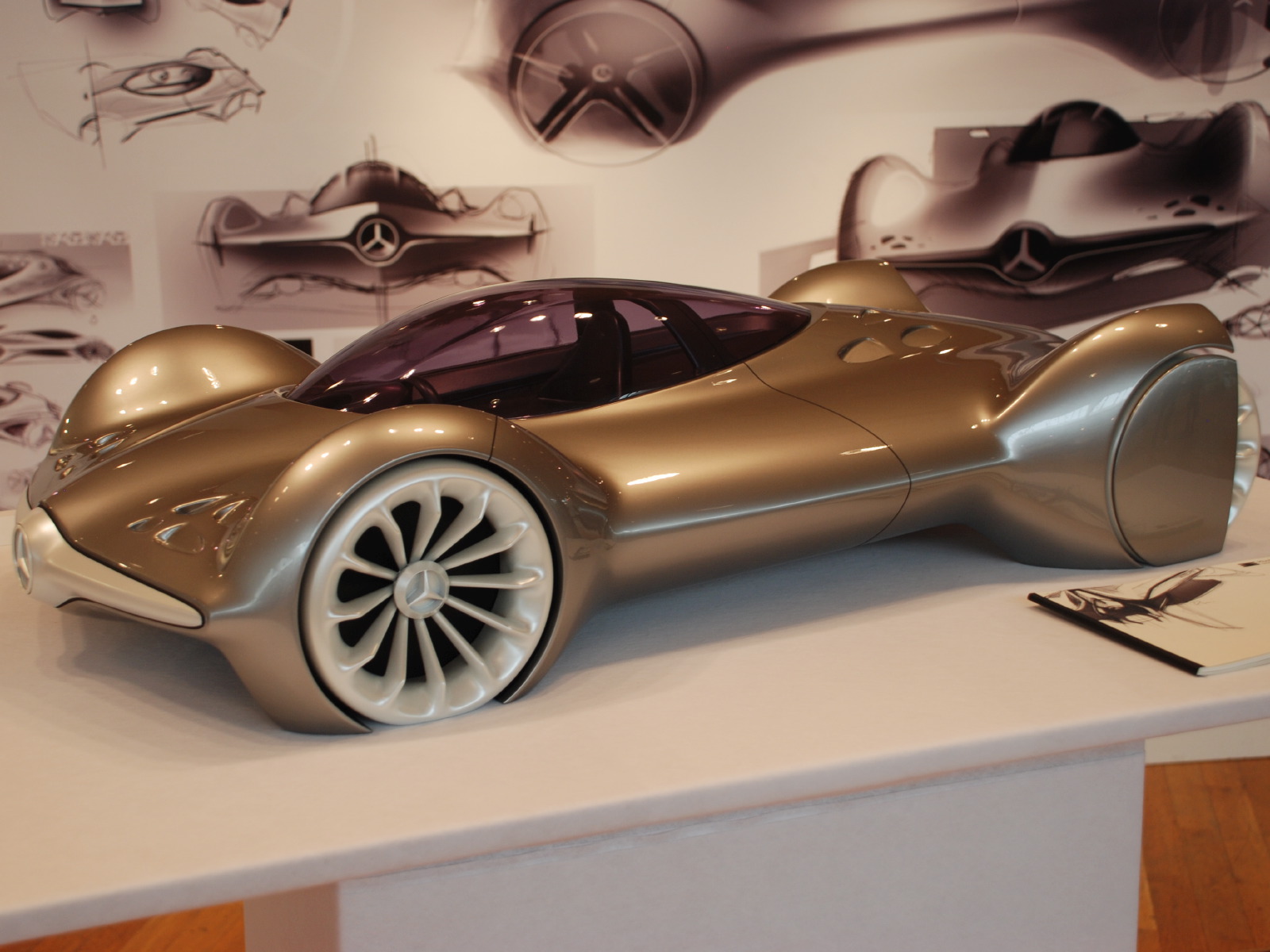 Project is influenced by Schlapp's time spent in Tokyo 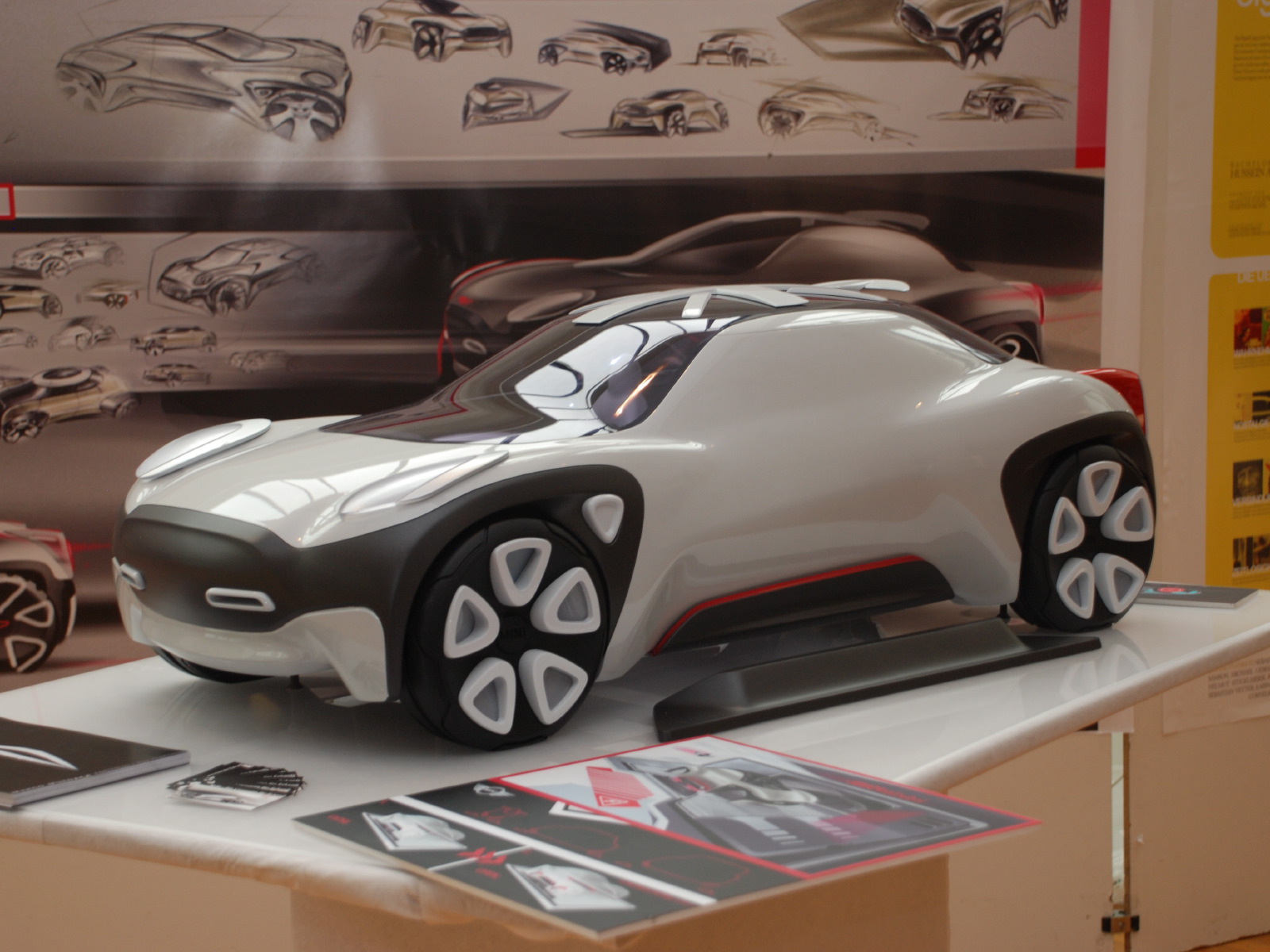 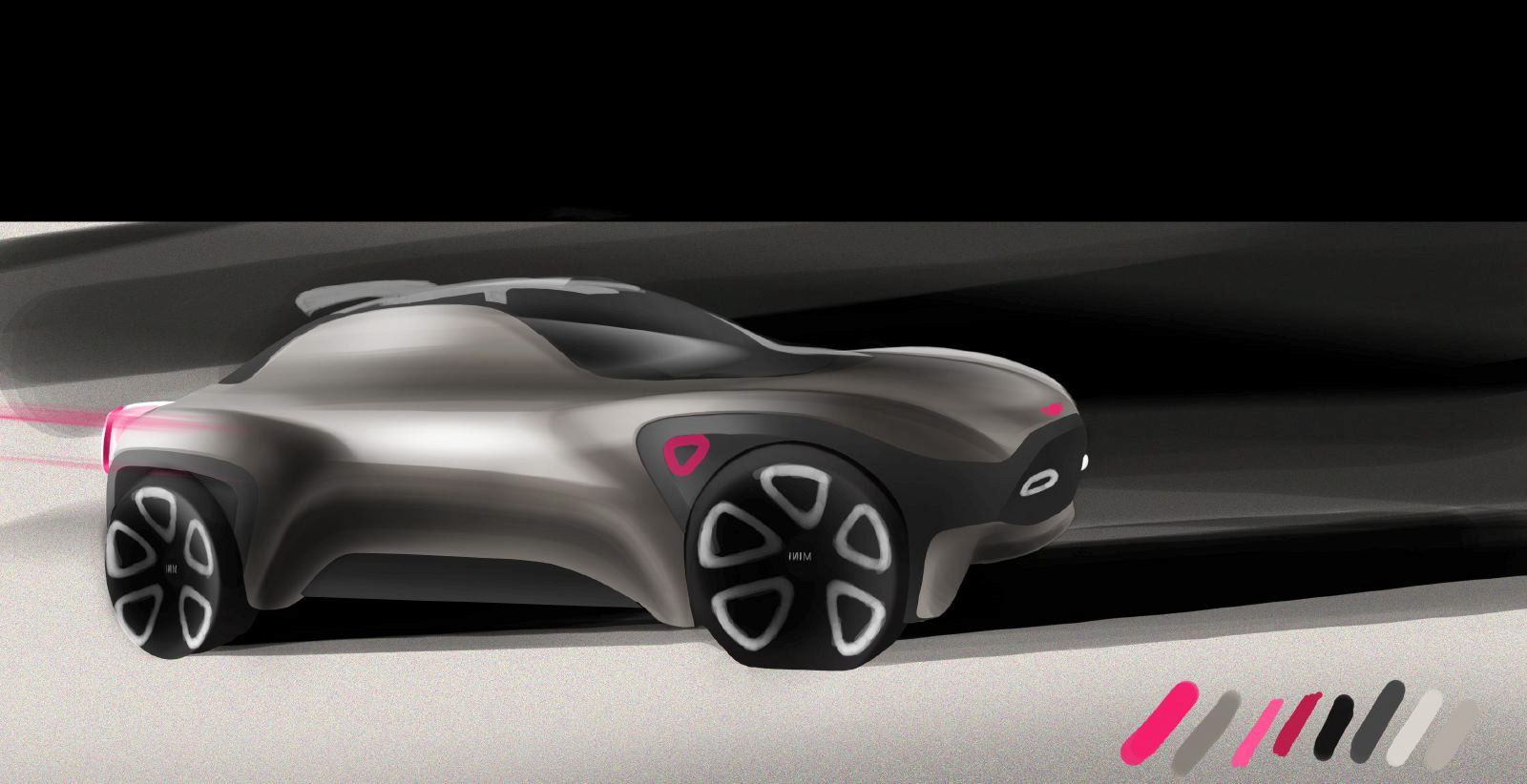 Interior stretches to front axle, thanks to in wheel electric motors

Audi Glitch
Stephan Jubt Rasmussen
Rasmussen questioned the future of super sports cars for his final thesis project, creating a vehicle that would alter its shape and evoke different emotions for both user and passerby. Inspired by Glitch-style paintings and the Phare Tower created by the Morphious agency, the vehicle adapts to its surroundings. In city mode the vehicle's body moves up and forward slightly to give the car a shorter wheelbase and an elevated stance, with which the front wings also elevate, creating a sculptural character for the automobile. When the car moves out of the city and is driven on the open road it assumes a more aerodynamic aesthetic - a functional performance aesthetic that is visible only when necessary. The seats are made of compacted dust, which is then glued together, and rapid prototyping is used to create the intricate latticework on the seats, interior and rear-mounted battery. 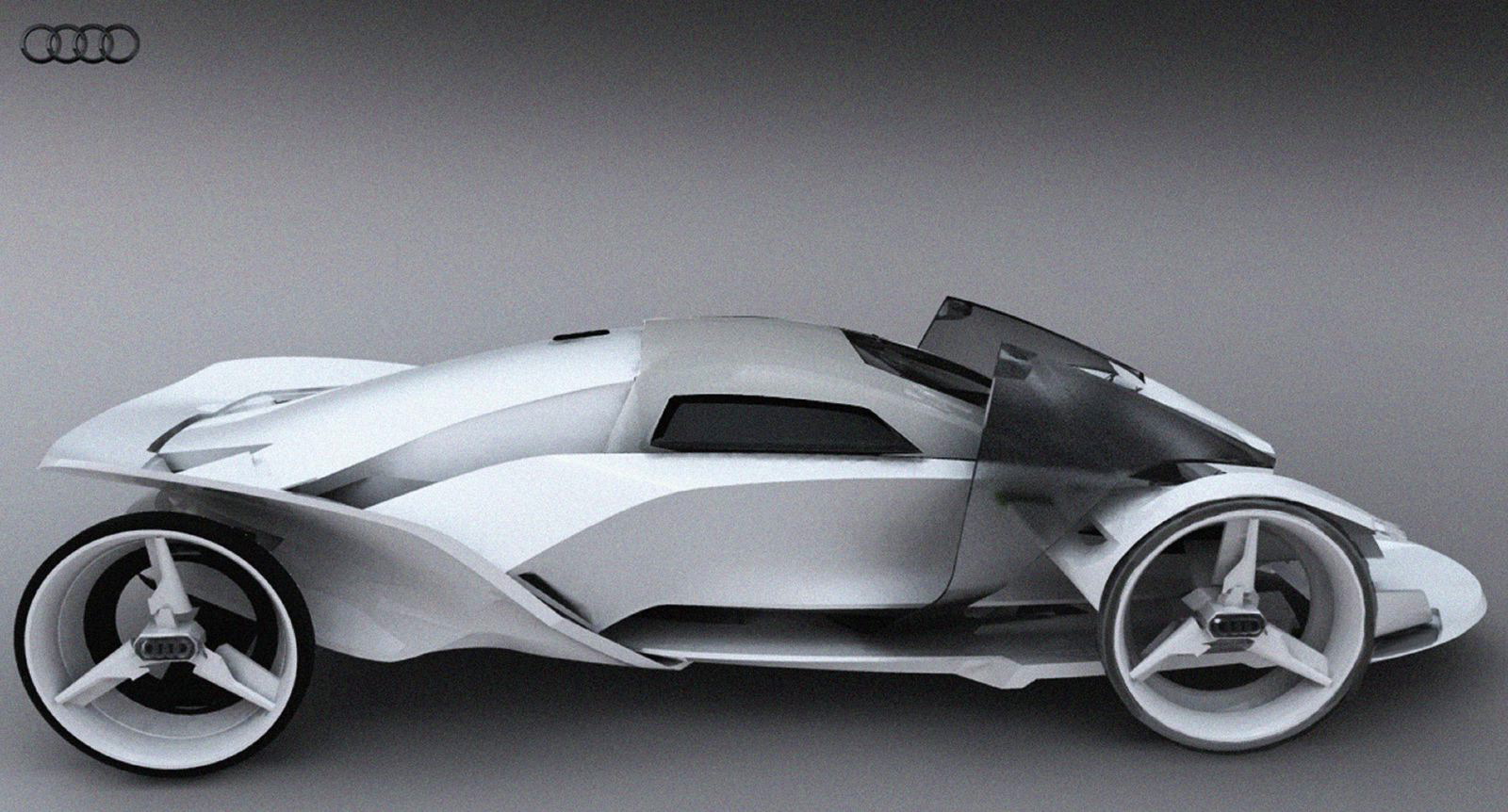 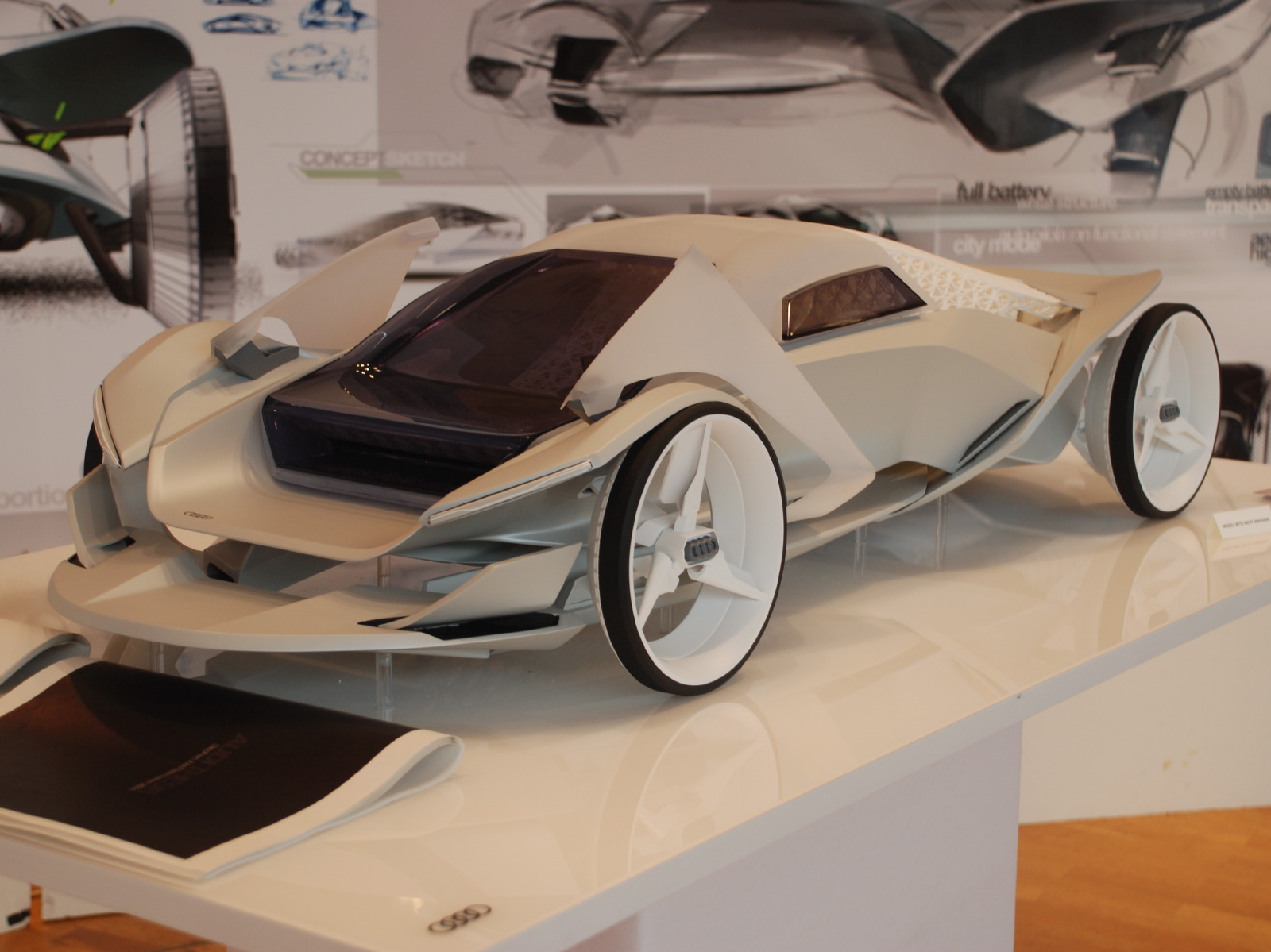 When driven out of town, Glitch adopts a more aerodynamic aesthetic 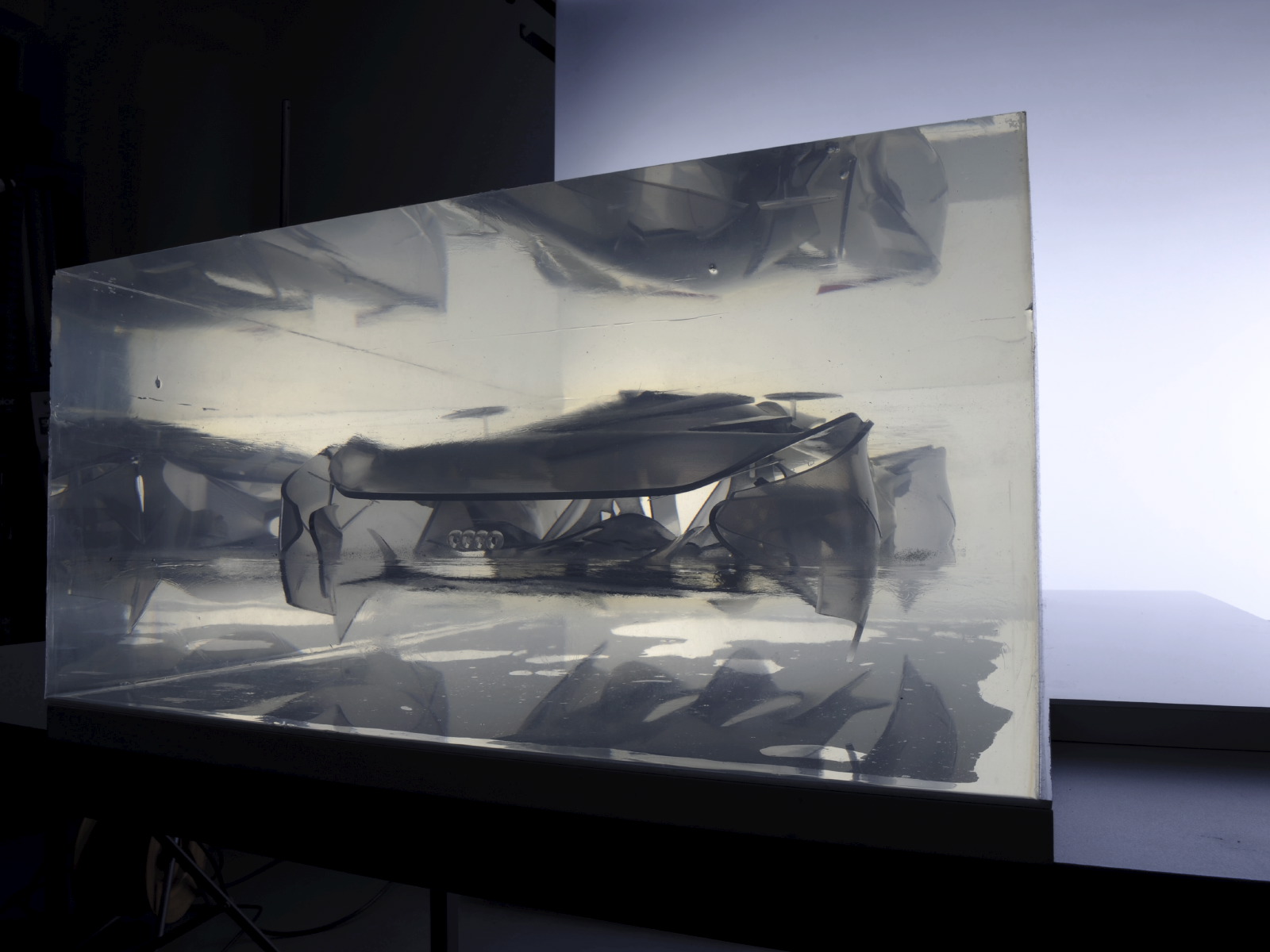 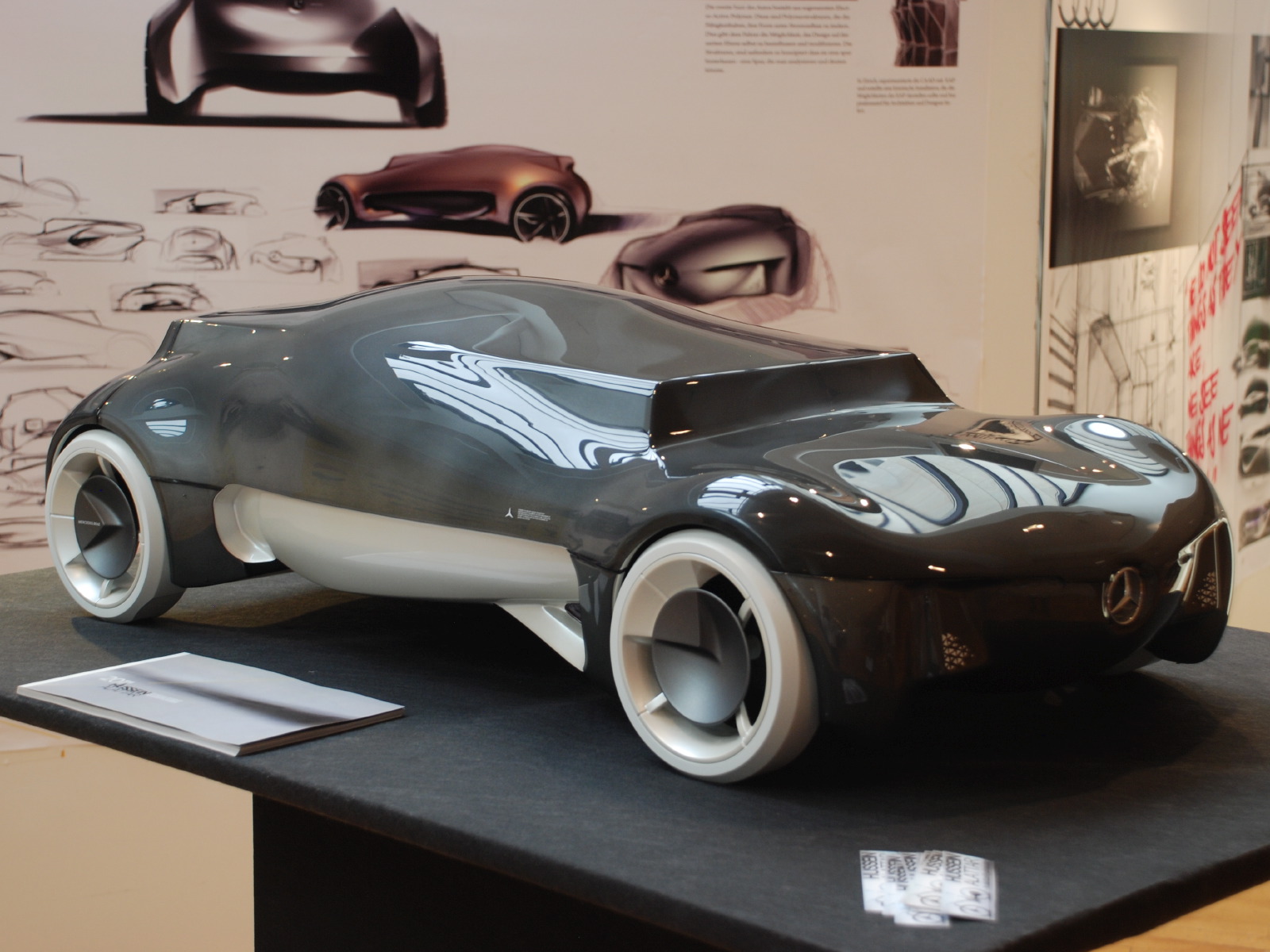 Eigen Zelt by Hussen Alattar plays to feelings of nostalgia 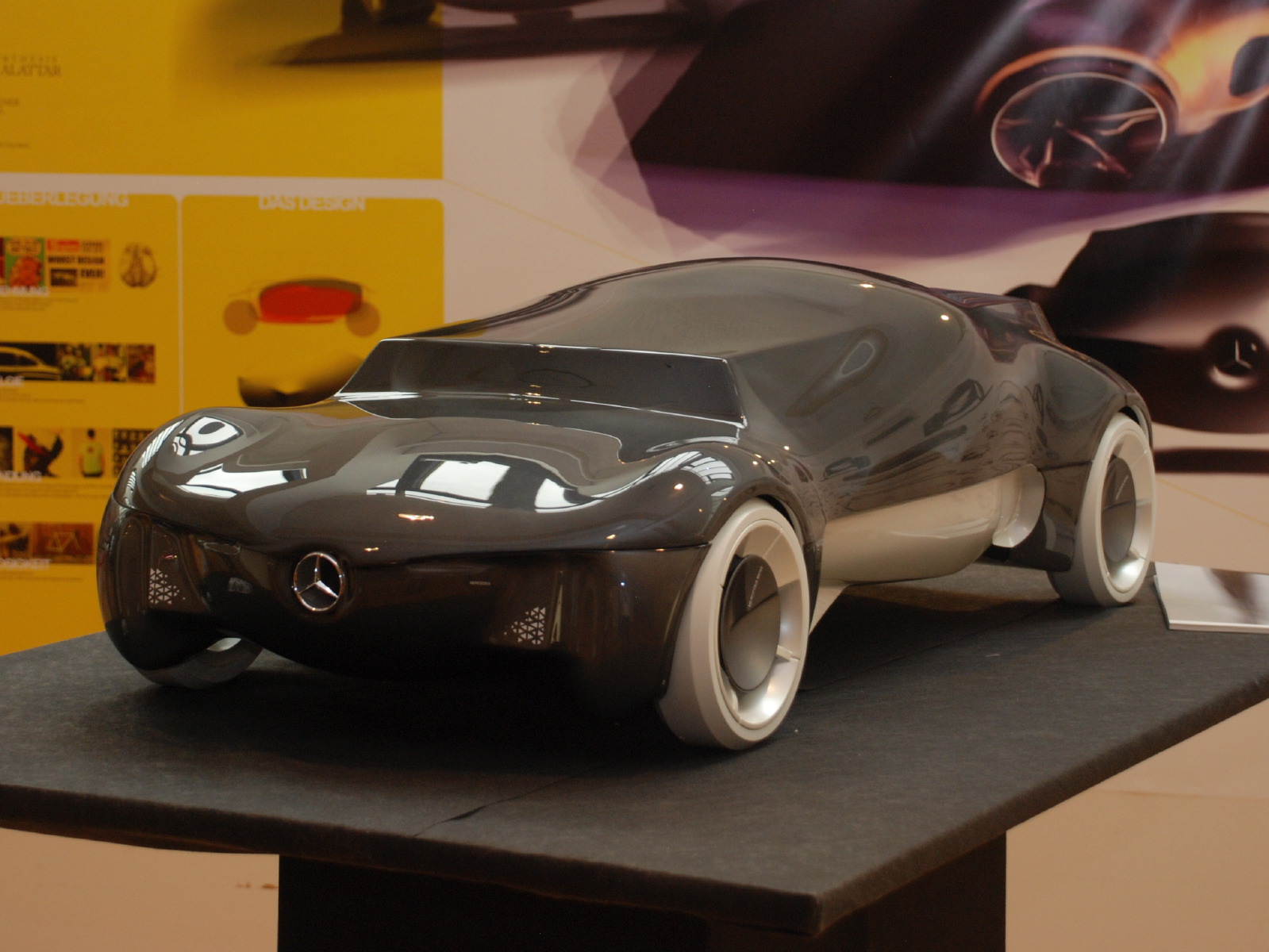 Concept isn't modular, but features an inner and outer 'skin' 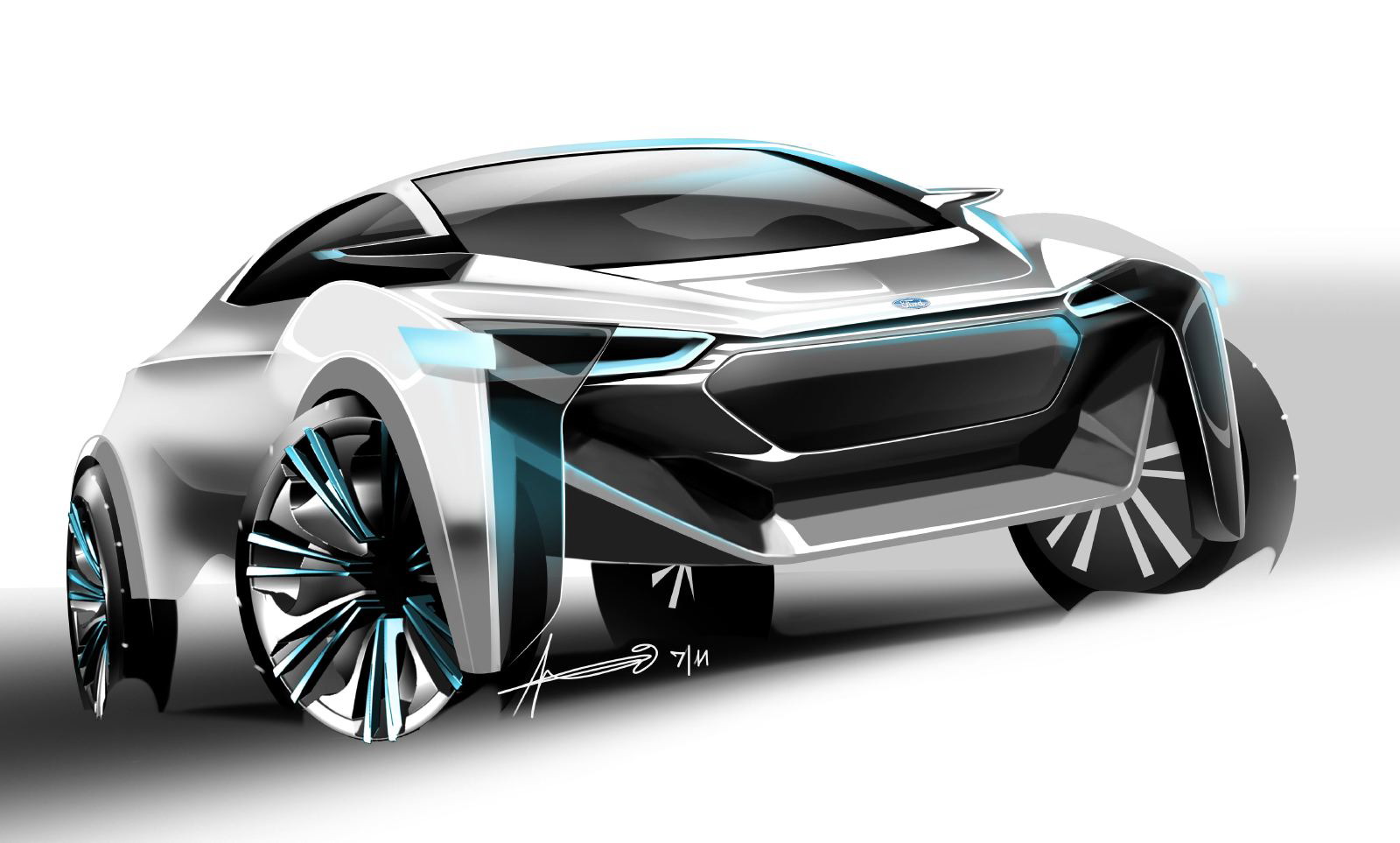 W.I.R.E is powered remotely via a modem

Double row of seats inside, allows for seating for six

Audi - What is the future was yesterday?
Etienne Giuga
Both of the concepts Giuga can best be described as artwork. Inspired by a quote by Kazimir Malevic, who said: "Square is the basis of all for forms and links humans to nature," one of his projects was a pure square which, through the use of an anathema system, sources power from a grid. A projection of a design devoid of wheels (crosses give the feeling of proportion) is displayed within it. Looking into the next step for the future, Giuga forsees a new, simple and clean aesthetic with the engine separate from the car.

The second project Giuga exhibited was a vehicle inspired by Audi's quattro system, which celebrated its 30th anniversary while he was an intern at the company. In his scenario, 2140 will see Audi enter a new race around the world through all four seasons. The abstract shape, which references Audi's surface treatments, has a malleable exterior skin that reacts to the different weather and road conditions the car has encountered. "The model keeps its history, it's not just washed off at the end of the race," said Guiga.

Shape-Shifting Architecture
Daniel Schlapp
This concept was a new concept created for the growing population that chooses to live in the world's megacities. Shlapp contends that there is an untapped market for these urban areas, and he has therefore created a vehicle inspired not only from the time he spent in Tokyo, but also by folded paper, the Hoberman sphere and pop-out books. The concept started from the base concept of unfolding and eventually gave way to a vehicle that would consist of two different stages. In the first stage the vehicle is not a car, but a sculpture. It stands on its own but is effectively a one-dimensional shape. When it comes time to use the car, it unfolds on a central axis, revealing a single-seater or a two-passenger capsule where occupants ride in tandem. This solution would be a huge advantage for parking.

Eigen Zeit
Hussen Alattar
Alattar wrote down questions of interest and the theme of timelessness was born. Working from the premise that people often have feelings of nostalgia for experiences that they have not lived, his main idea was to create a car that would accompany a user of the span of their lives, adapting to different needs and wants. The concept is not modular, instead it features two different ‘skins': an inner, autobiographical skin that is the creation of the owner, and an outer skin, which is created by a designer. The interior features electro-active polymers, which influences the tension of the surface and its form.

Mini of the Future
Marco Murdaca
This project set out to reinterpret Mini in light of current technical and social change. Its creator also researched the future of mobility, particularly in growing megacities. The resulting concept is a vehicle with short exterior proportions and a large interior, thanks to in-wheel electric motors and an interior that stretches all the way to the front axle. The aim of the project was to keep a three-box design but to develop the proportions and plan surfacing of a typical Mini - and fitting larger wheels, a lower waistline, higher fenders and a higher roof. The car features an induction system in the car's rocker panels to charge the batteries and a number of aerodynamic elements, such as the 3D shape of the rear lamps and the roof graphic

Porsche interior (Unseen)
Roland Pretkau
Pretkau created a 1:1 scale interior for Porsche during his internship with the company. Unfortunately for him, they liked the concept so much that they decided to keep it, and prevented him from showing it at the annual exhibition. Instead he showed a concept he worked on last year while in the 6th term of his Bachelor program, and an orange colored Renault Alpine project he created for his 4th semester sponsored project.

W.I.R.E
Igor Vishnesky
The W.I.R.E. (Wireless Intelligence Resonance Energy) concept is devoid of an engine or batteries, it features a modem which sources energy from a satellite to propel the vehicle. The lightweight concept, intended for use in the world's densely populated megacities, is 200mm longer than a Ford Fiesta and 40mm higher. The entire exterior design has been optimized for airflow, and a free-floating layer above the glasshouse redirects air for downforce. Inside, the vehicle can accommodate up to six passengers across two rows of seats