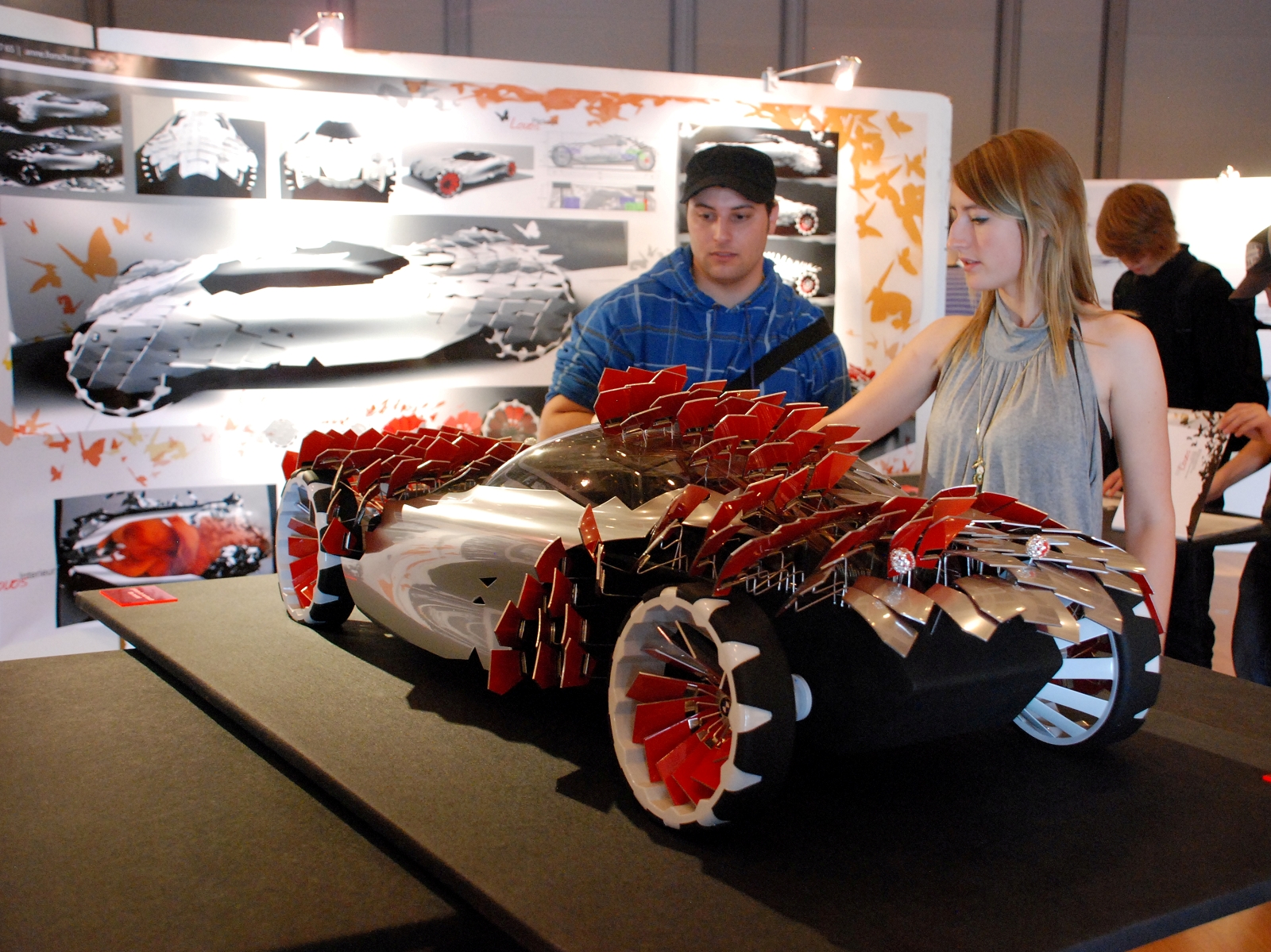 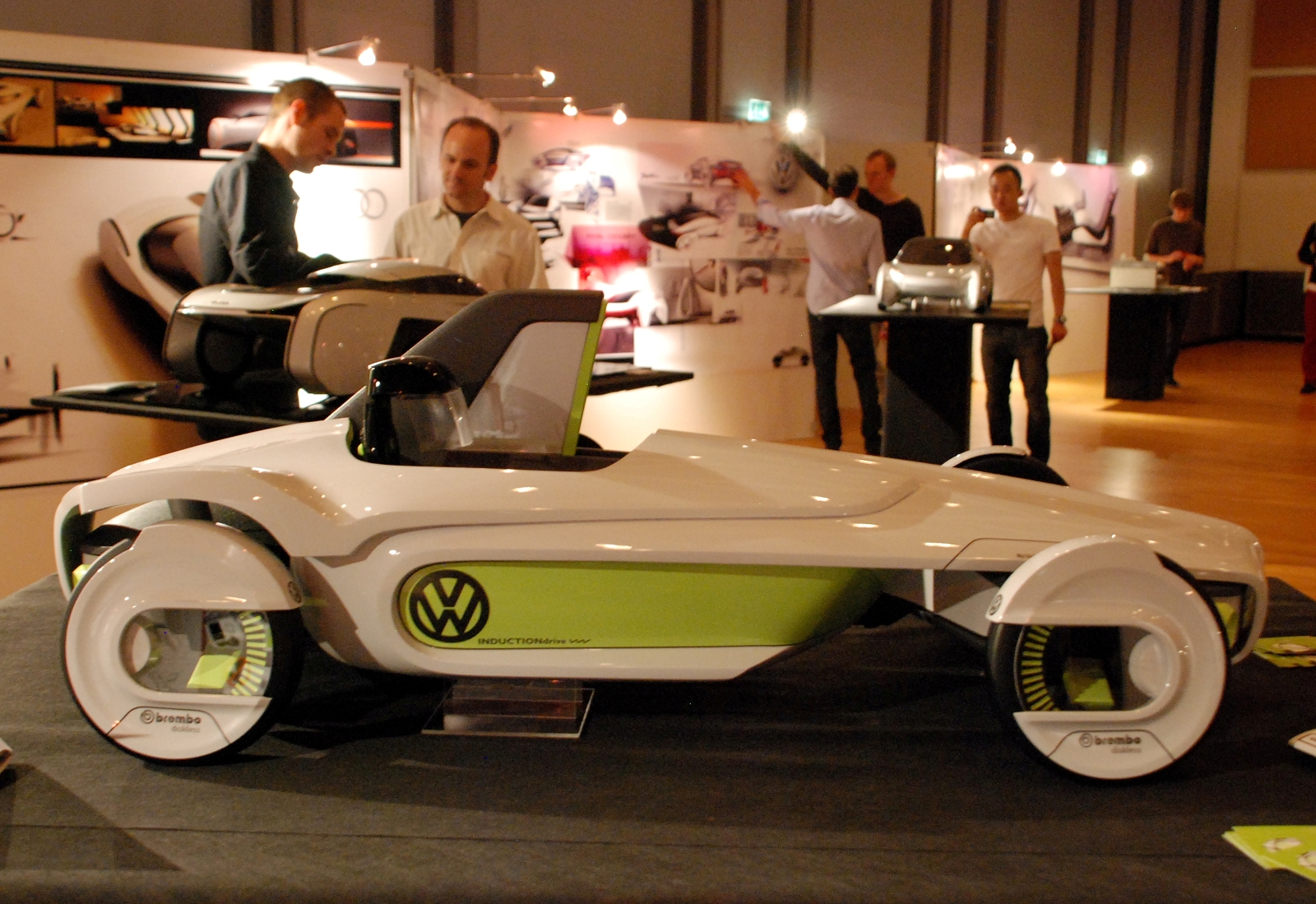 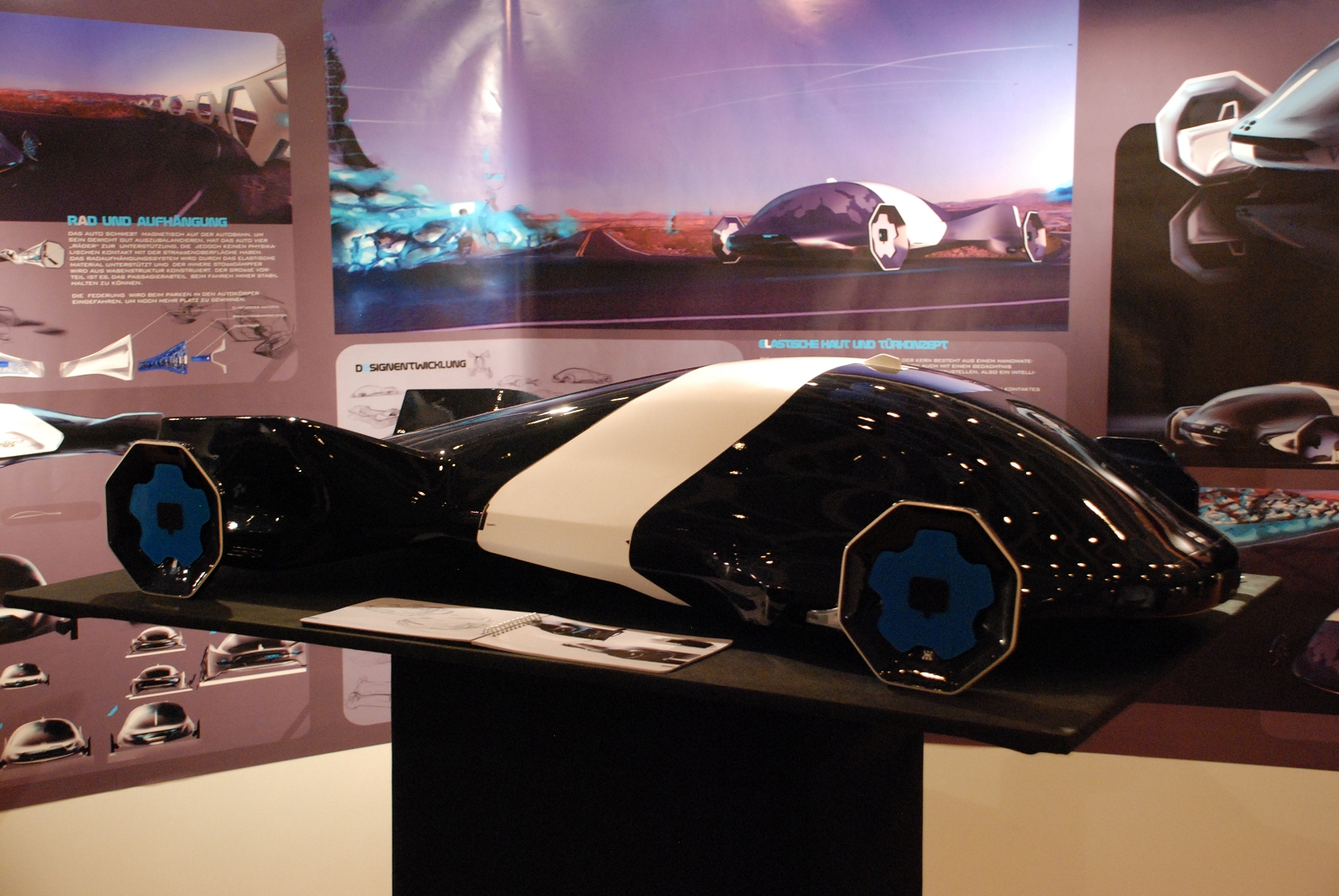 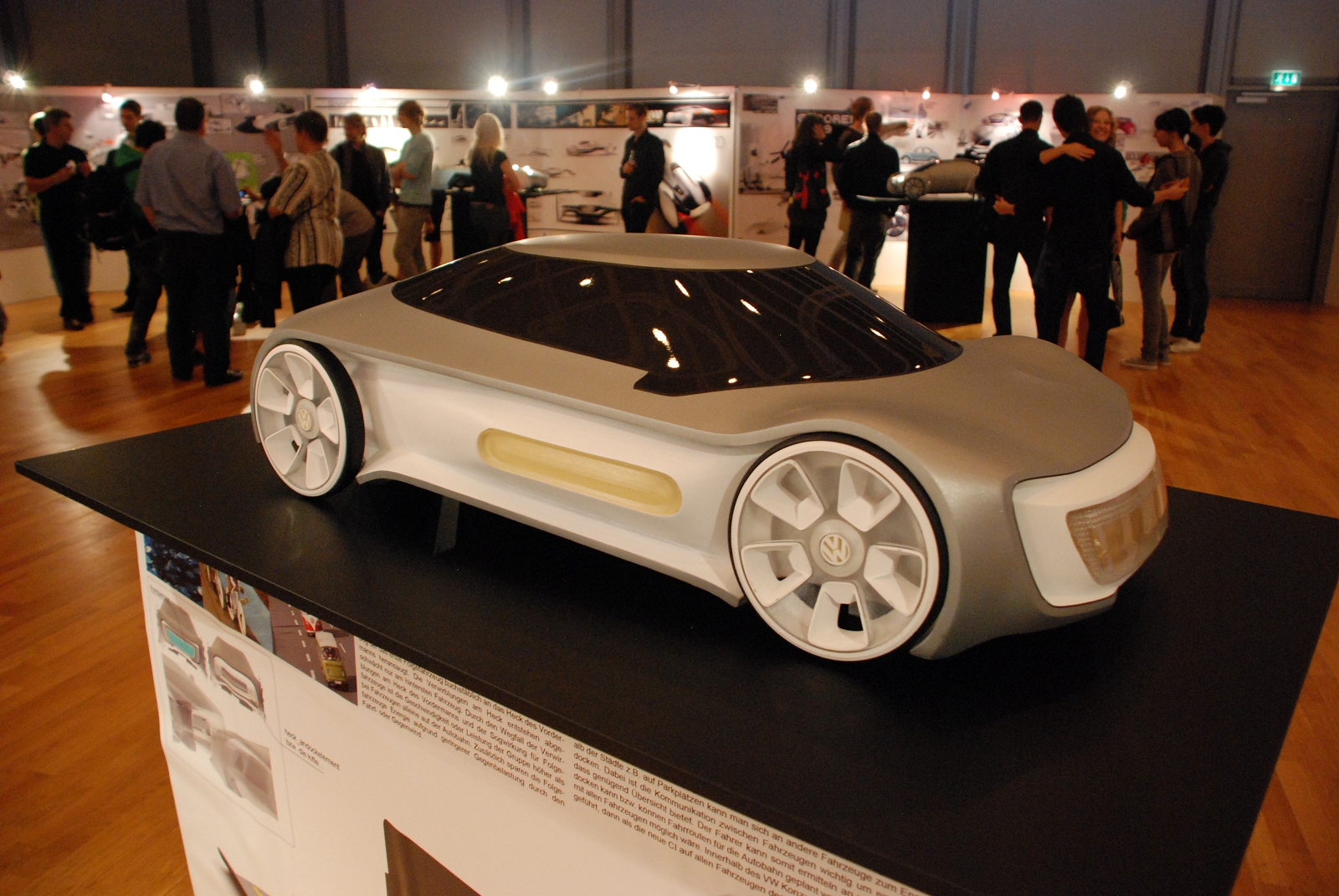 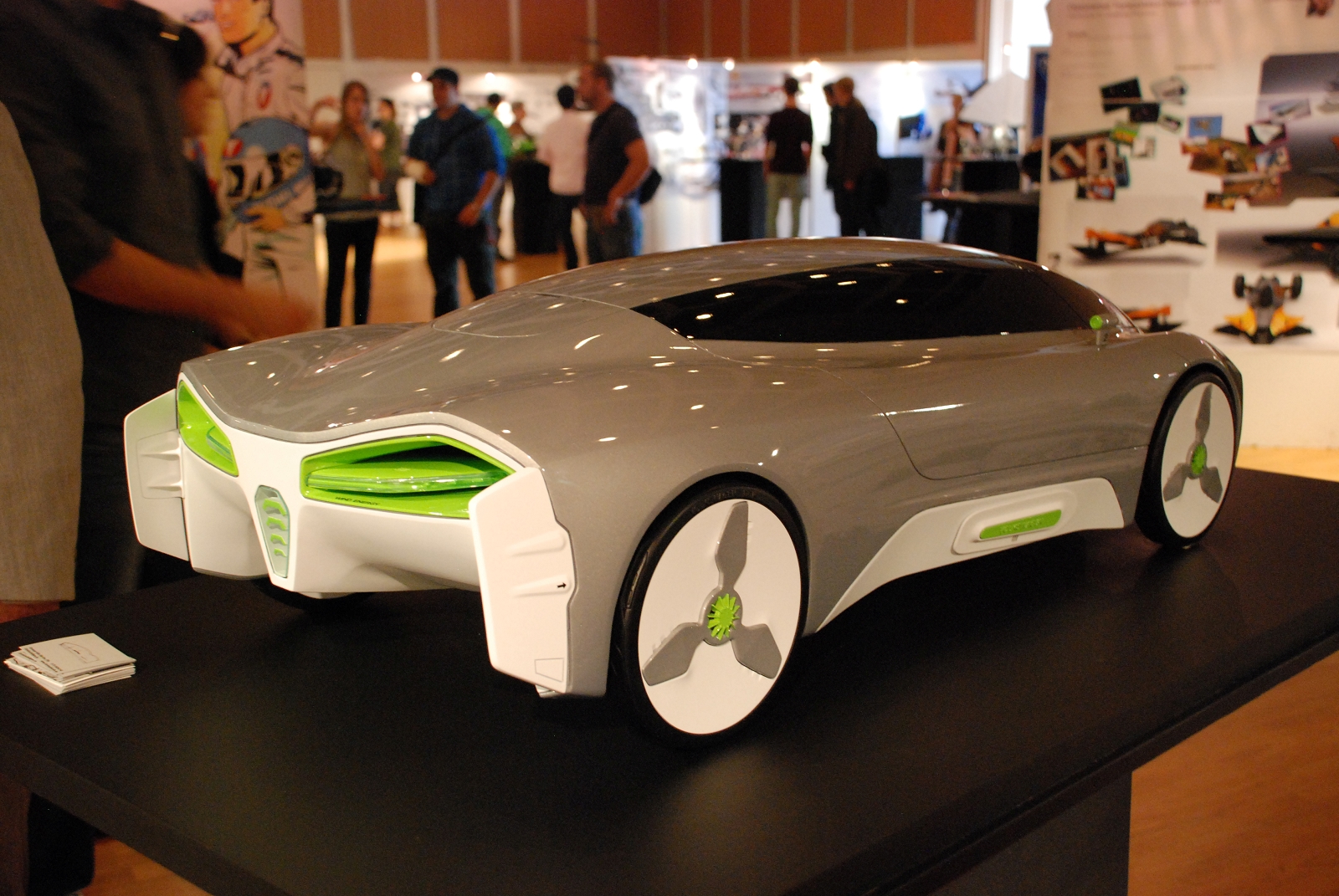 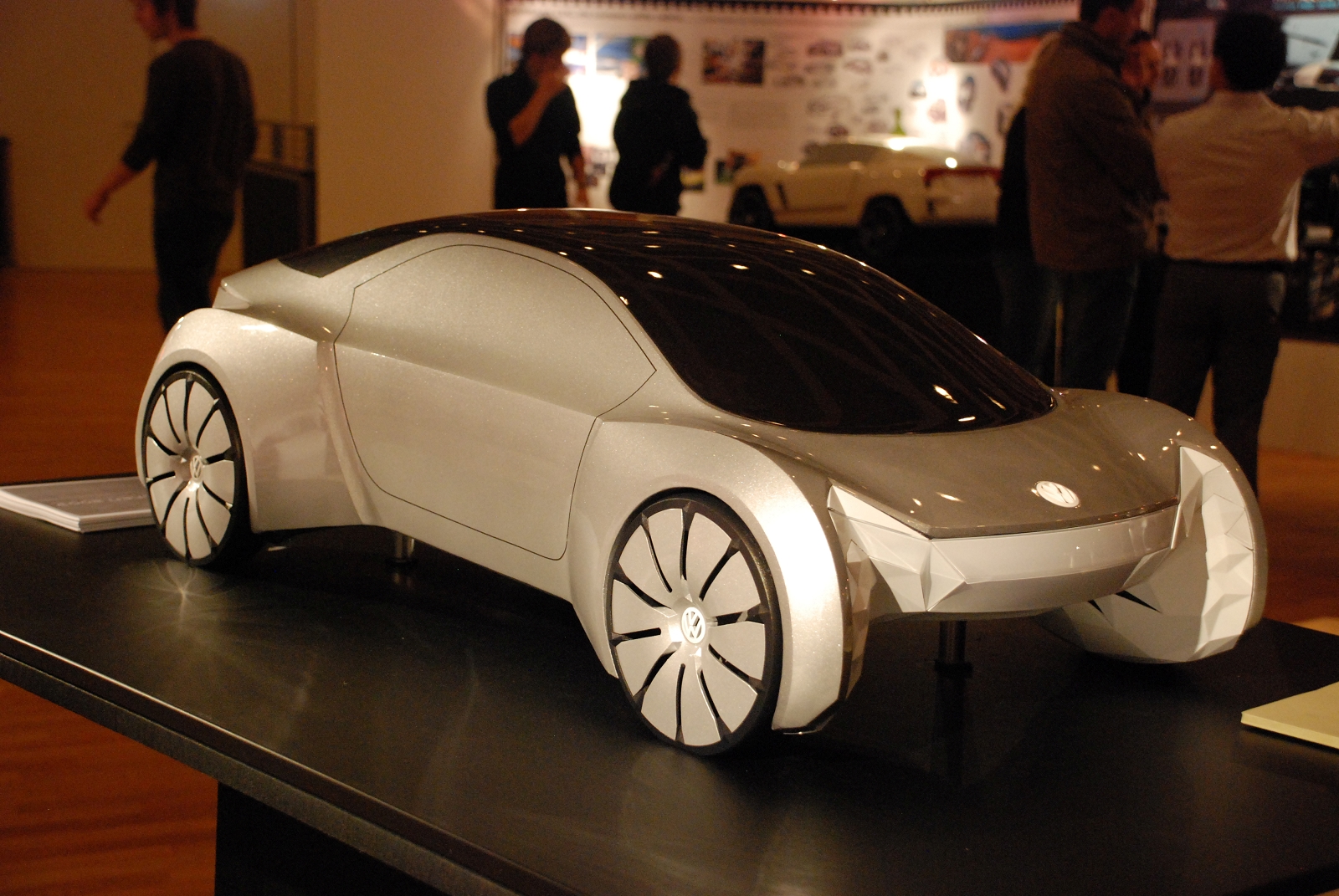 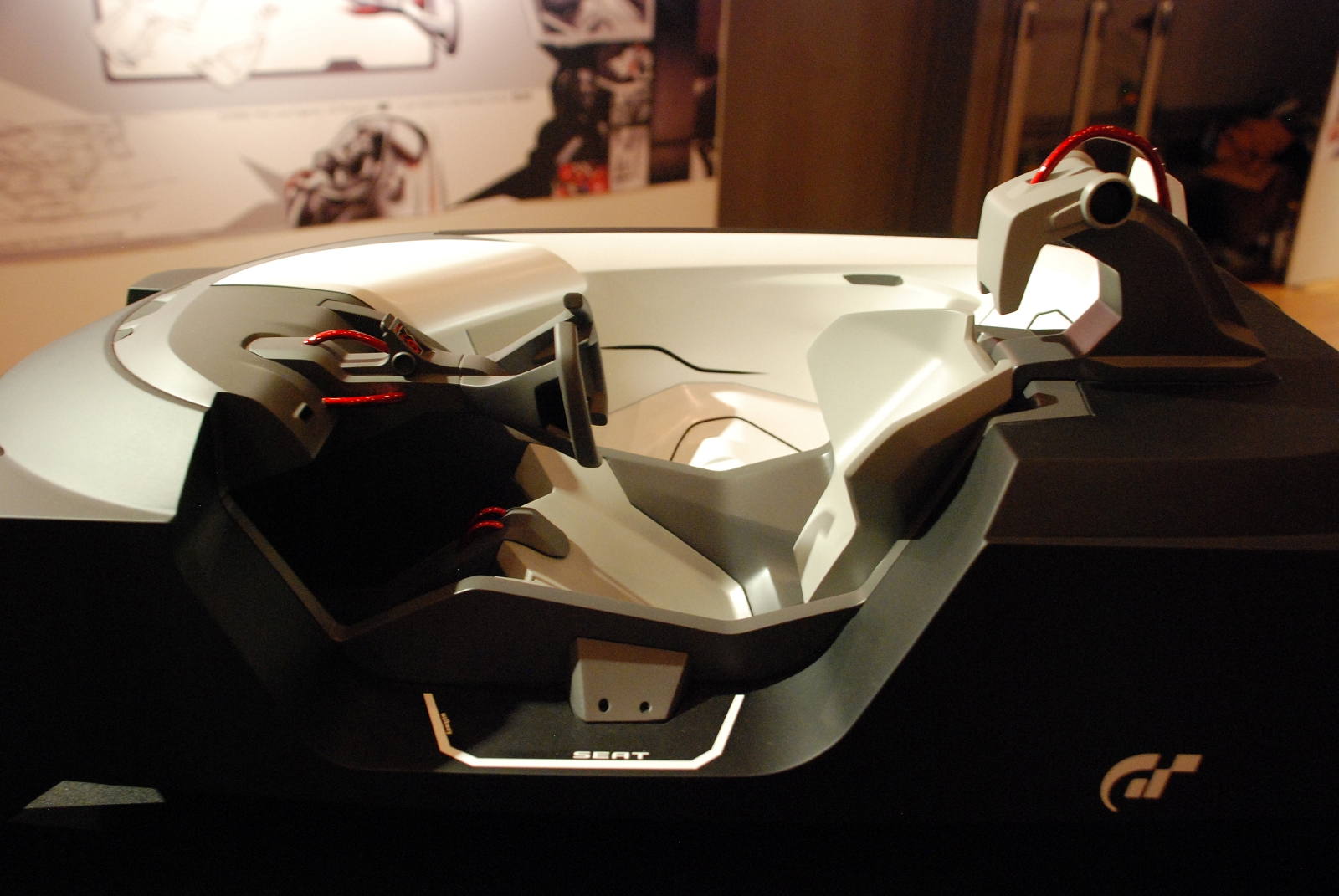 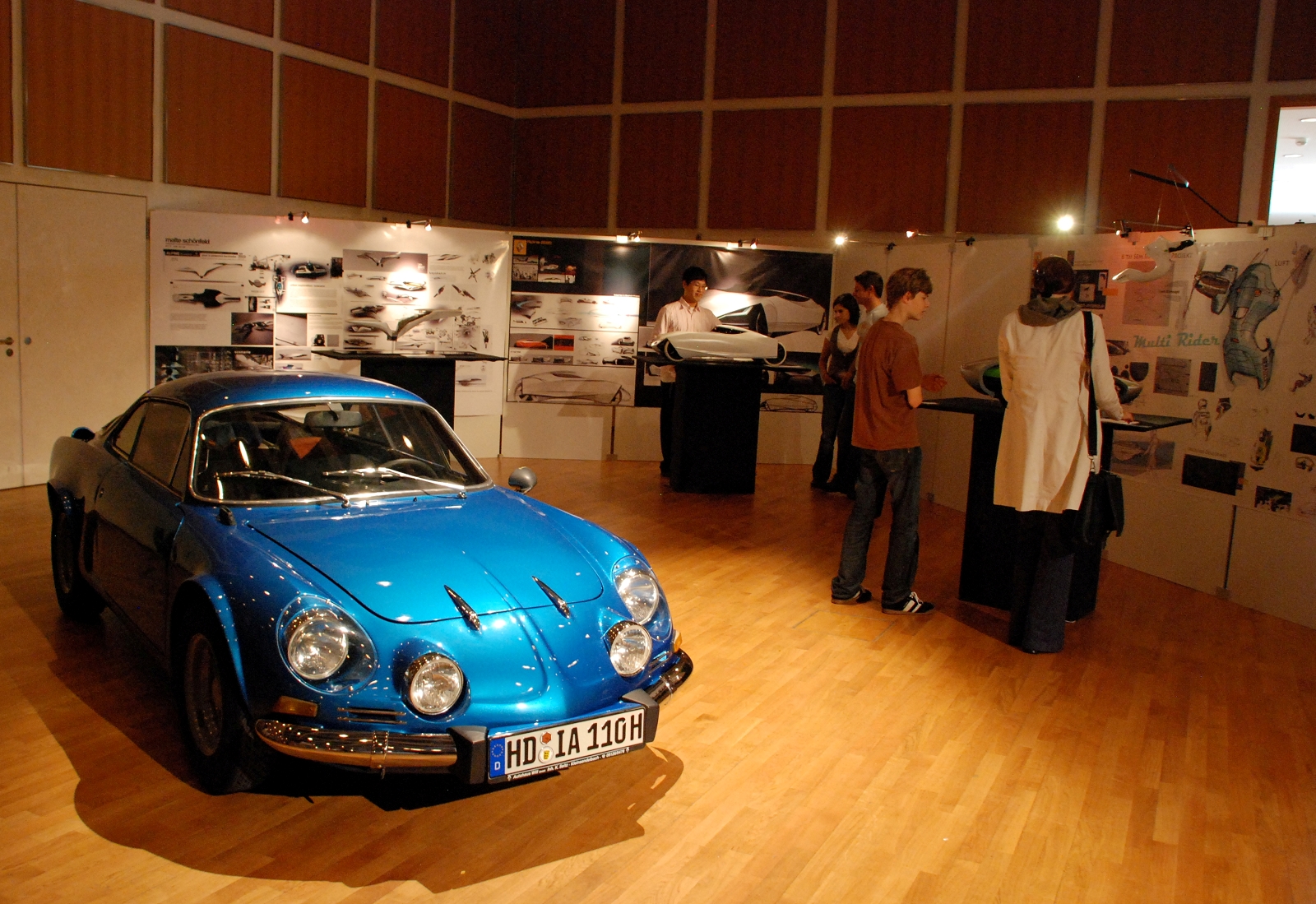 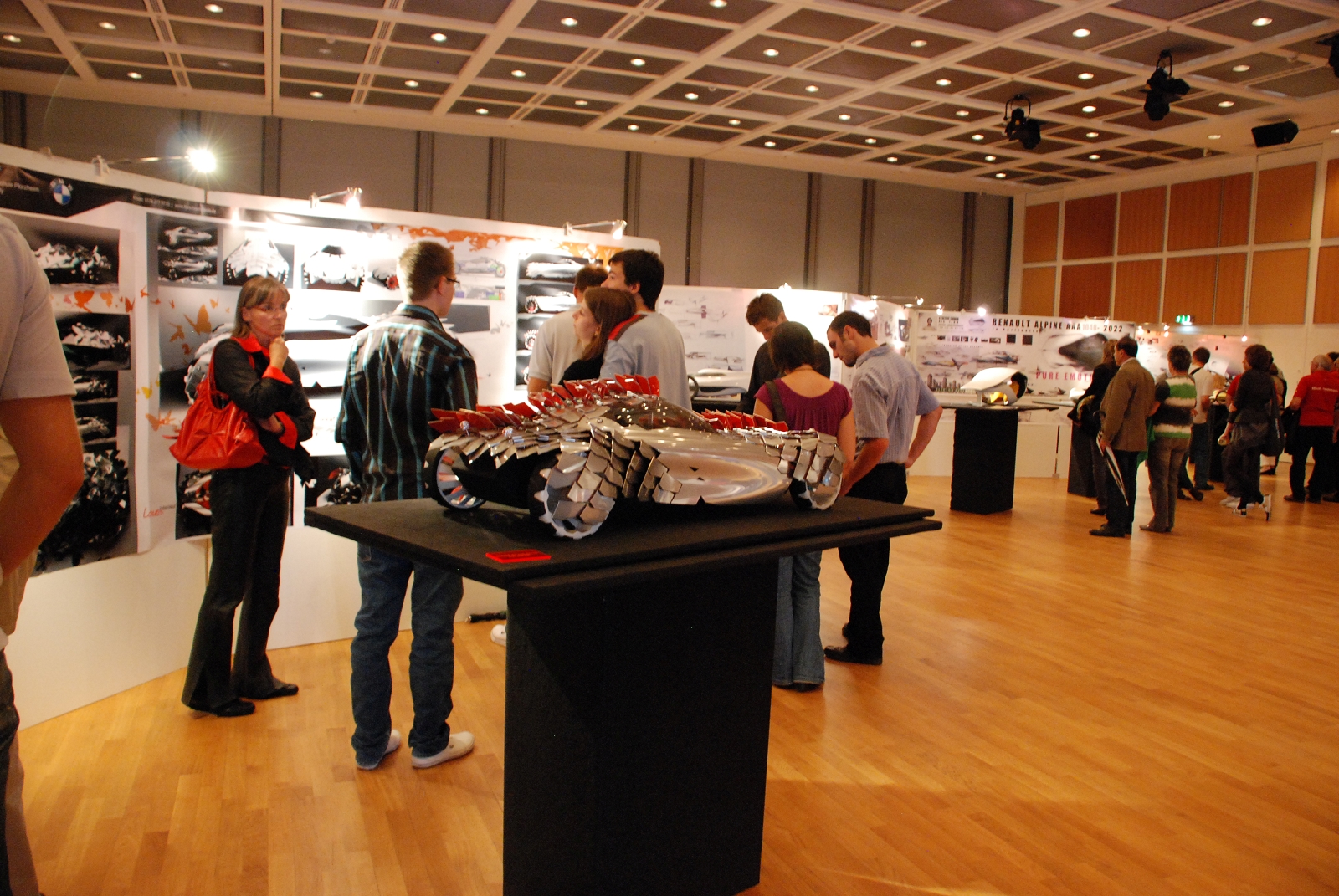 The exhbition space spanned two levels of the Congress Center 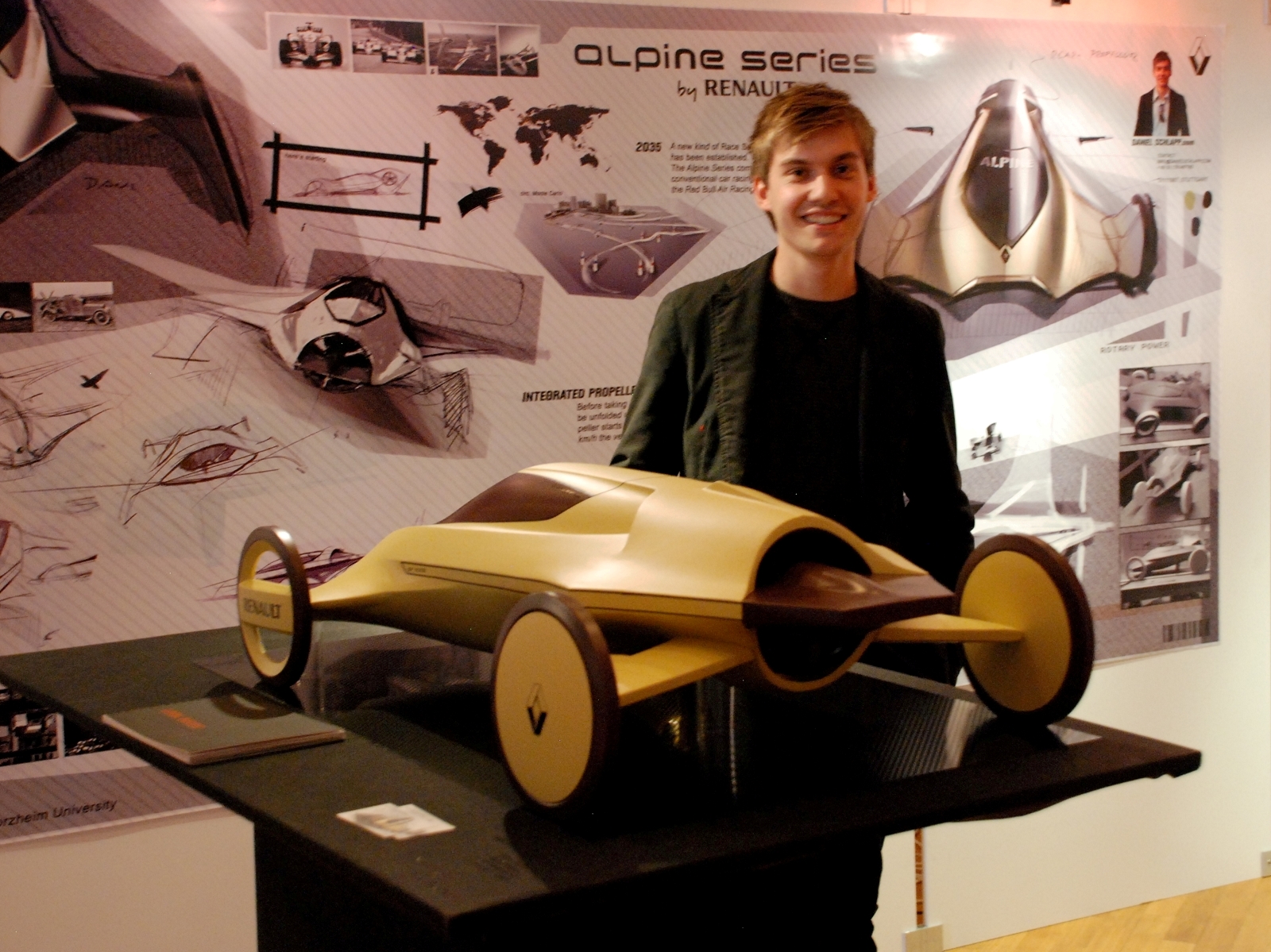 BMW Lovos
Anne Forschner
One of the more eye catching physical projects on show was this BMW Lovos (Lifestyle of Voluntary Simplicity) by Forschner. The concept is based on a philosophical background and asks critical questions about life, the architecture of a vehicle and designer's habits in creating a car. Through experiments concentrated on a 'surface' theme, the Lovos becomes a new sculptural interpretation of a vehicle exterior, breaking traditional rules and providing a wide spectrum of new ideas and solutions for the future. Provocation and emotion are the main themes in the design - movable individual pieces and the resulting high contrast let the viewer stop and rethink established systems in the car industry. 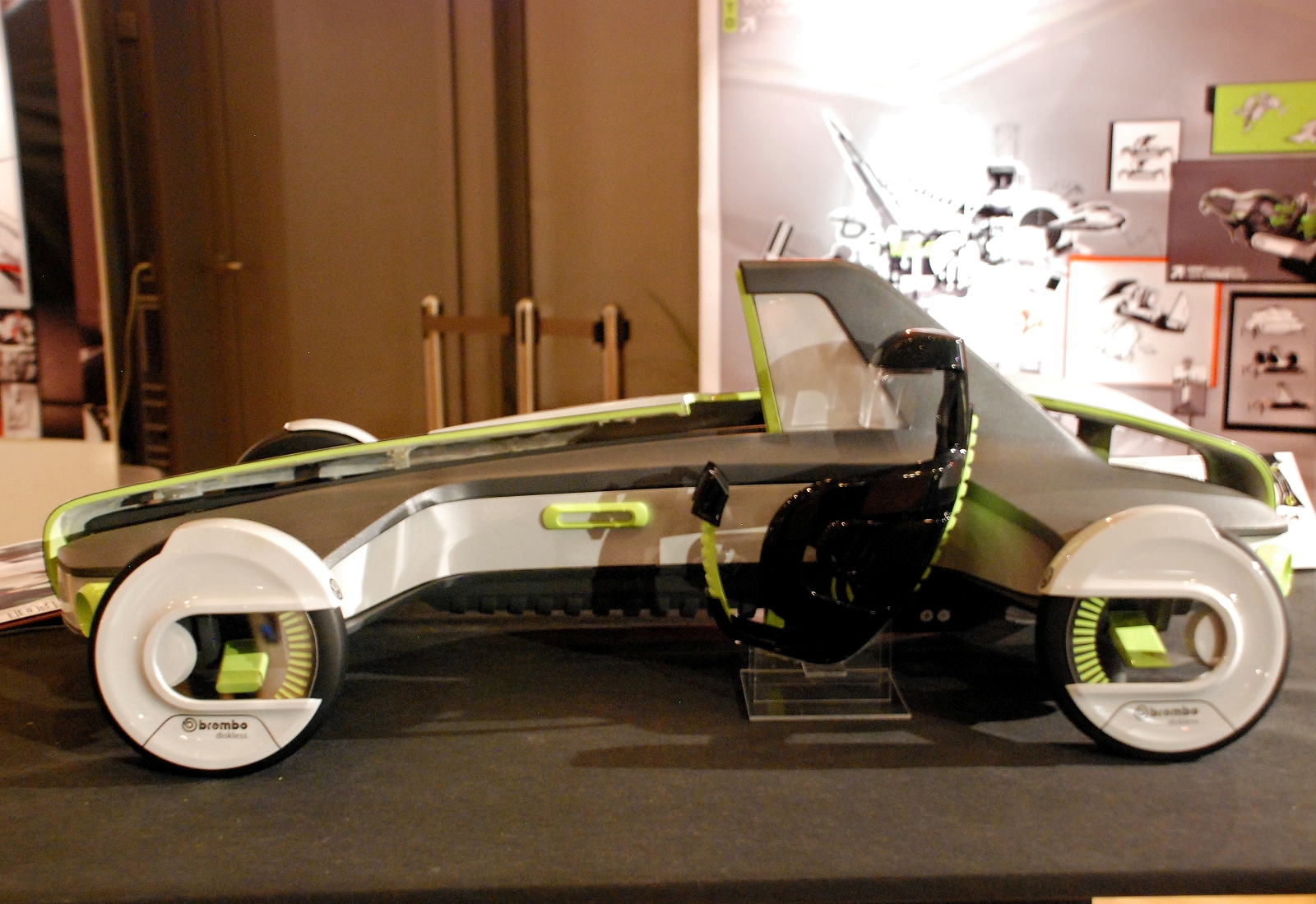 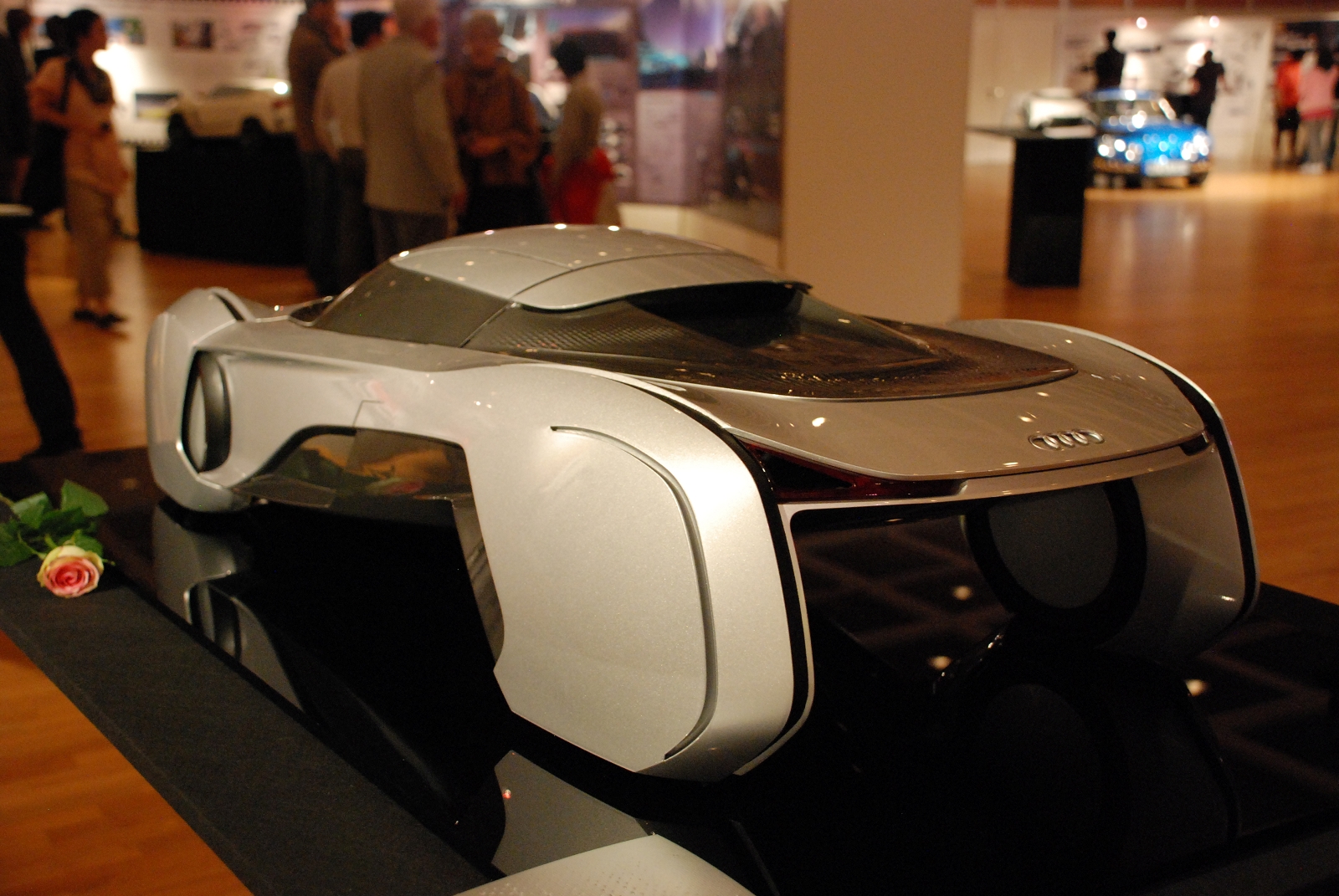 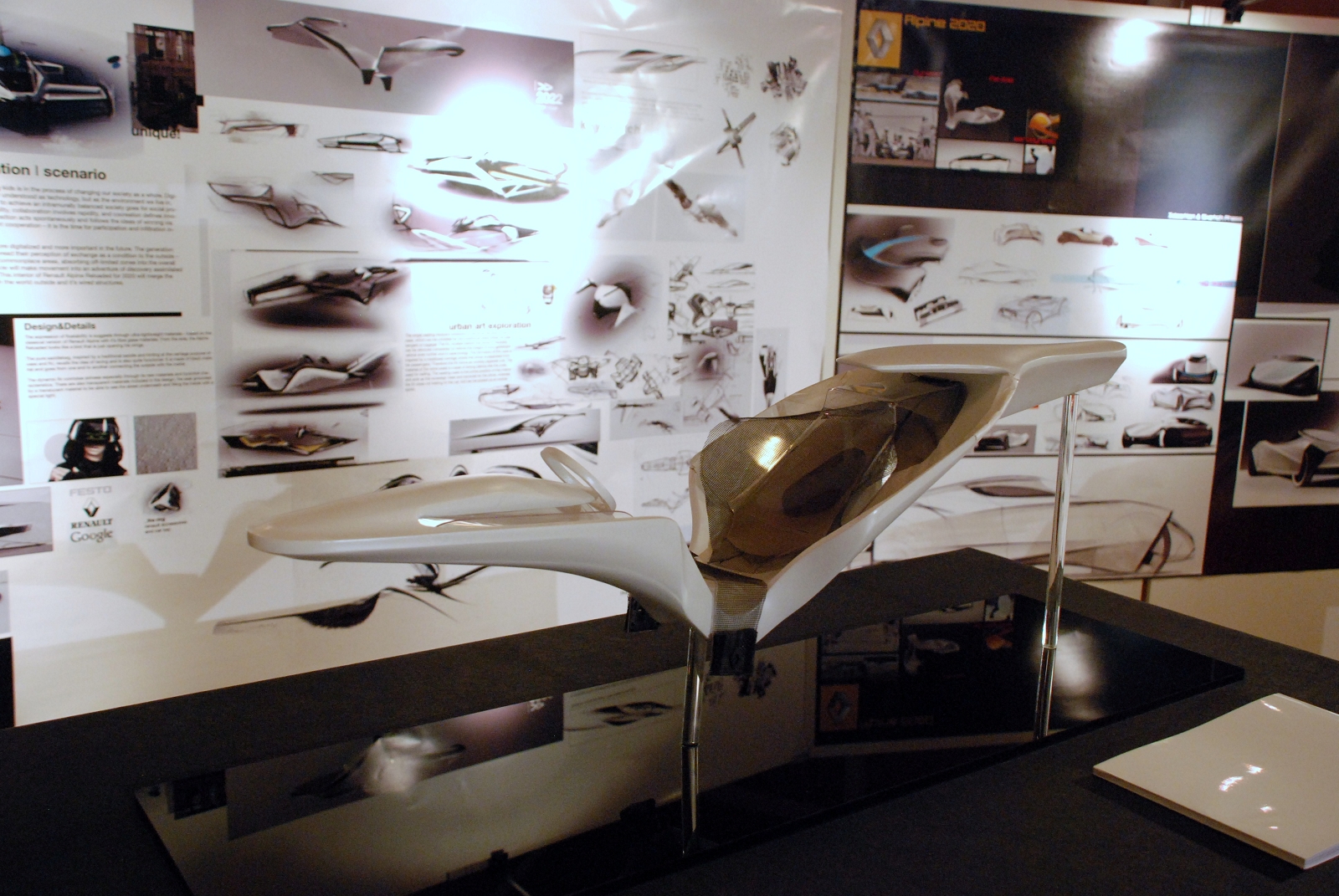 Vision VW
Stefan Goeppel
Goeppel had two concepts on show, the Offsport concept created during his internship at Ford, and his main project, the Vision VW. Sponsored by Volkswagen, the concept was inspired by the principle of a wet shaver - you keep the handle and receive a new product just by changing the blade. By employing a platform that integrated all of the vehicle's core functions - safety, mechanicals, electrics - users are free to change the exterior shell of the car and the number of seats while the underlying structure of the vehicle remains the same. To illustrate the concept, Goeppel developed a model devoid of A-, B- and C-pillars, but with a central pillar and an integrated helmet in the seat. The concept communicates VW's product style through its clean design and basic shapes, but the low-cost vacuum-formed interchangeable body panels can take the shape of a Golf or a bus if users require.

Limousine concept
Qian Zhao
Envisaged for the year 2040, this electric car concept features an active elastic body, which consists of an active-memory material stretched over a nanostructure. Influenced by the BMW Gina concept, the four-seat vehicle features underlying 'ribs', which are able to bend and move beneath the seamless 'skin', altering the vehicle's form depending on the number of passengers on board, the cargo load or aerodynamic requirements at speed. Different from conventional metal car bodies, this allows cars to be built in a unified whole, resulting in a great deal of new possibilities for design.

Volkswagen Slipstream
Adis Ragipovic
One of three projects sponsored and supervised by Volkswagen Design Wolfsburg, the Slipstream project was created to combat the problems of individual mobility in the future. Inspired by trains and other mass transport systems, the concept can dock together with other vehicles and travel in the konvoi-modus on highways. This will alleviate traffic jams, environmental problems and curtail further inefficiencies on the road while increasing energy savings through the ‘slipstreaming' aerodynamic ability of the car, an effect similar to that used in the NASCAR-racing series. The cars are also able to trade energy to power their electric engines.

Seat interior
Jan Schmid
Schmid created this Seat interior for the ‘creative class', people who live in diverse urban areas, but who don't typically use their cars everyday. Inspired by Sony's PlayStation driving games, Schmid developed a cabin that uses existing technologies like force feedback, active steering and a videogame-style interface, while giving the driver a unique position within the car. The driver focused interior layout was designed to accentuate the driving experience on an emotional level, while the passenger seat is slightly offset to the rear, in an all passive role. The result is something radical and emotional, which is fun to drive and is used for recreational purposes.

Undergraduate students in their fourth and sixth semesters worked on a Renault Alpine-sponsored project, which asked students to create the future vision of the Renault Alpine brand.