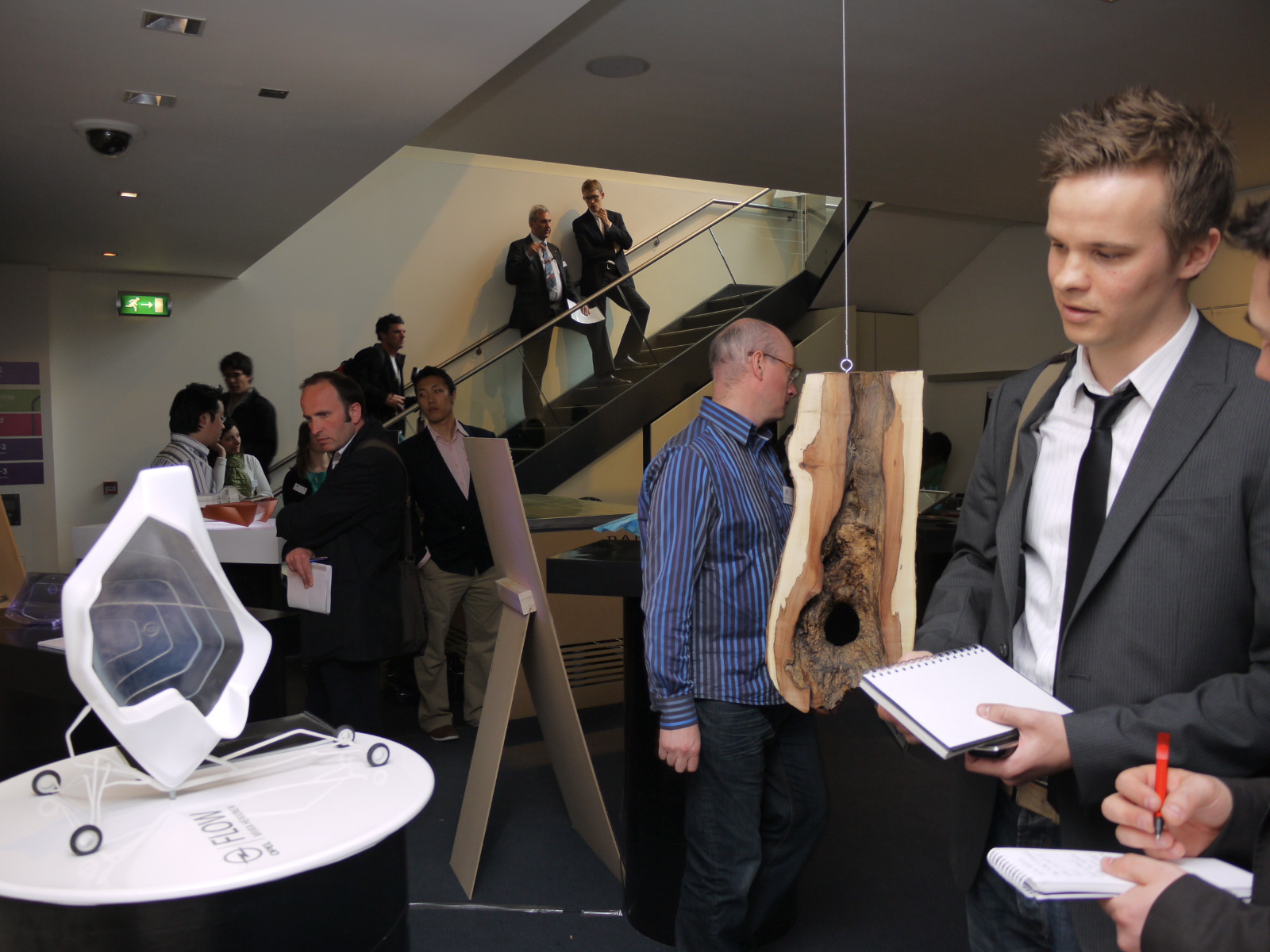 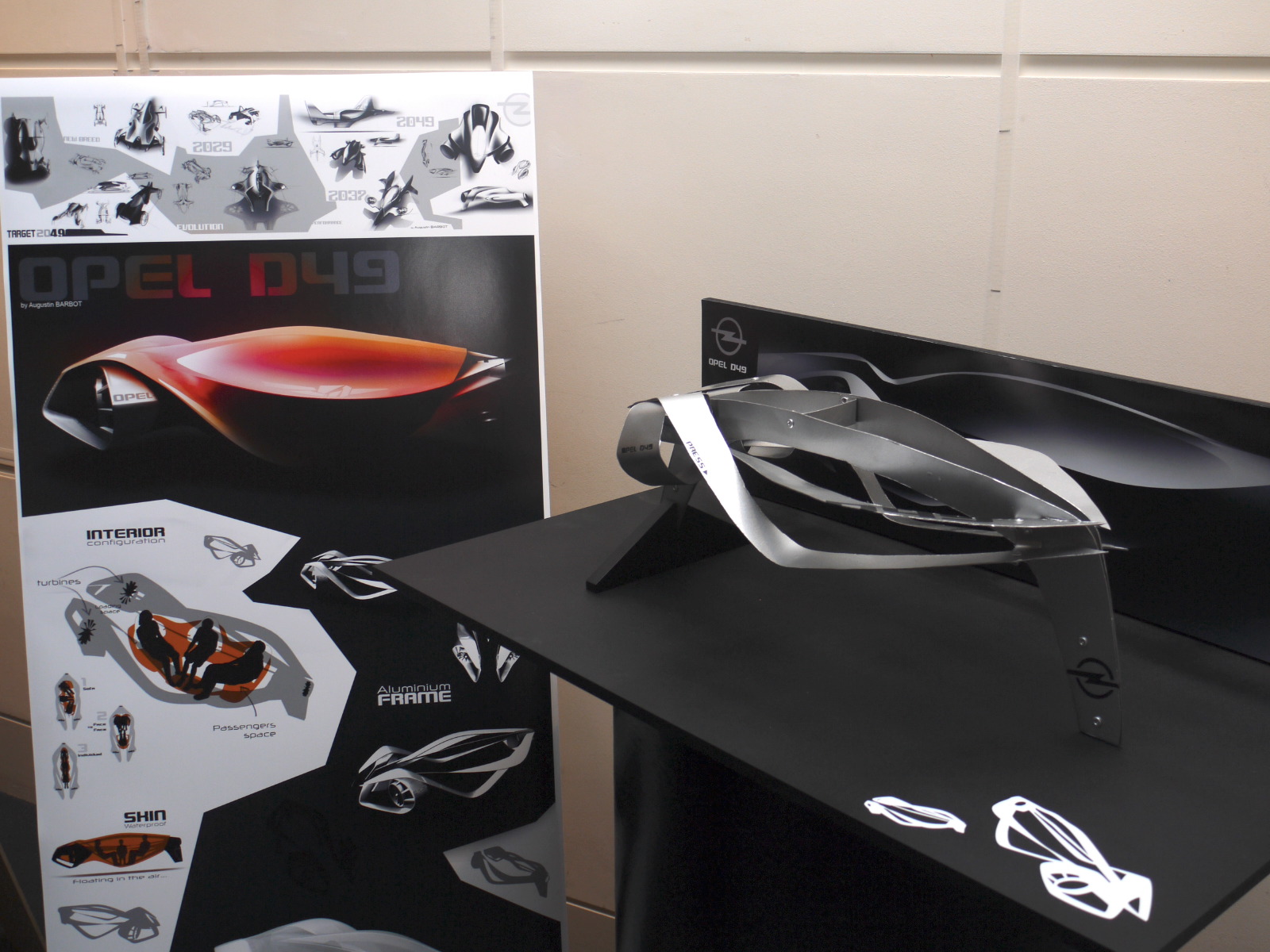 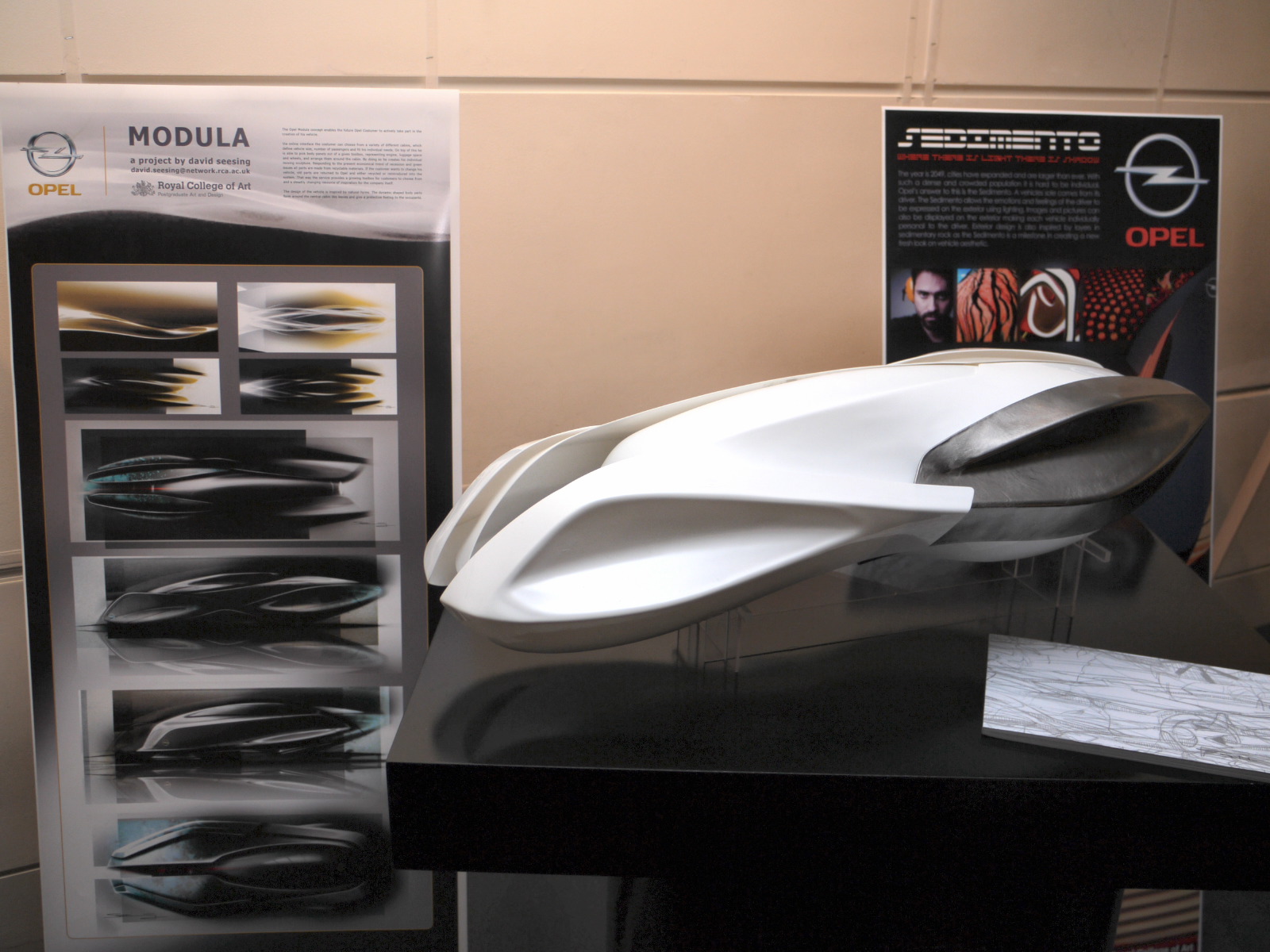 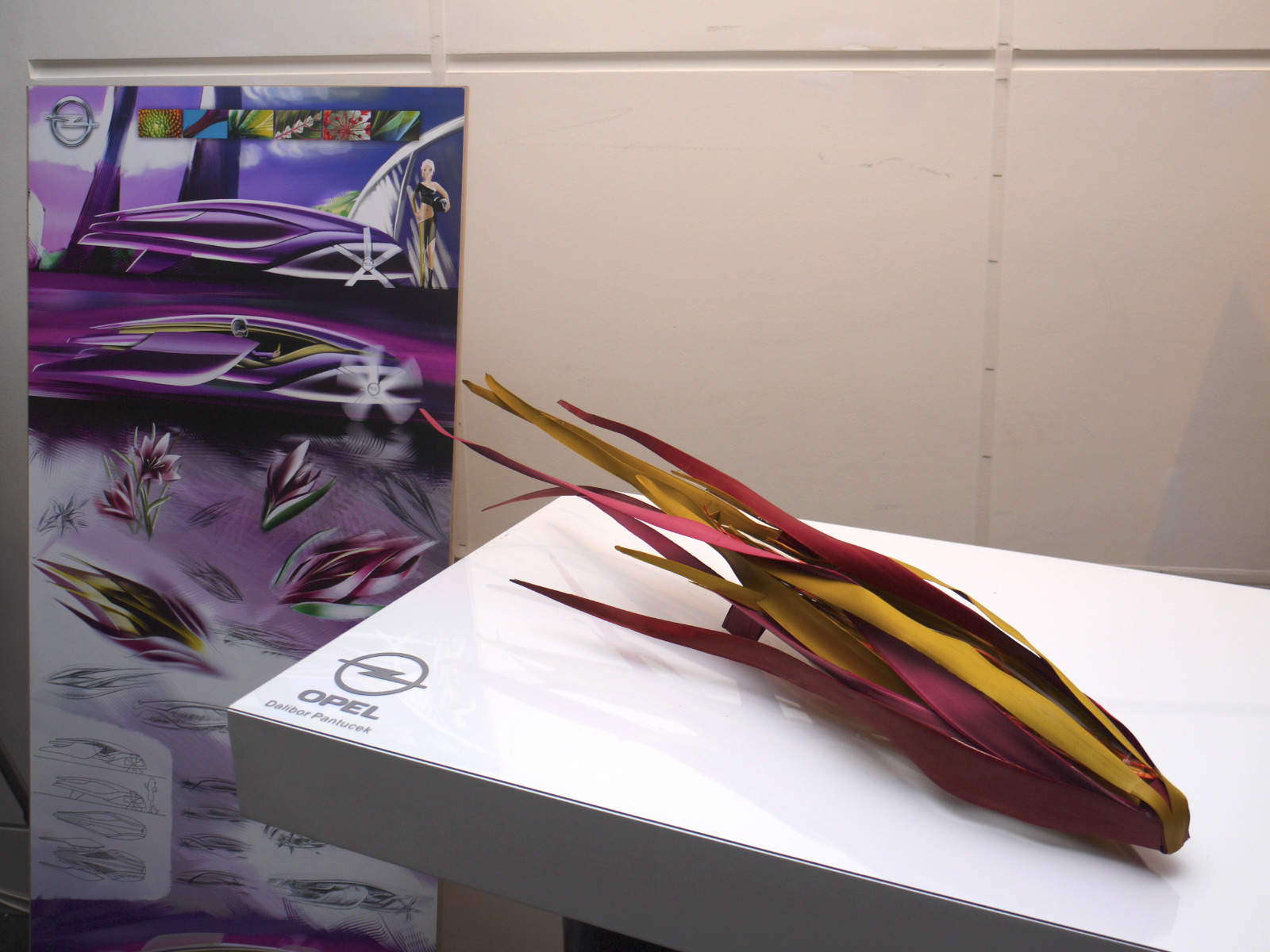 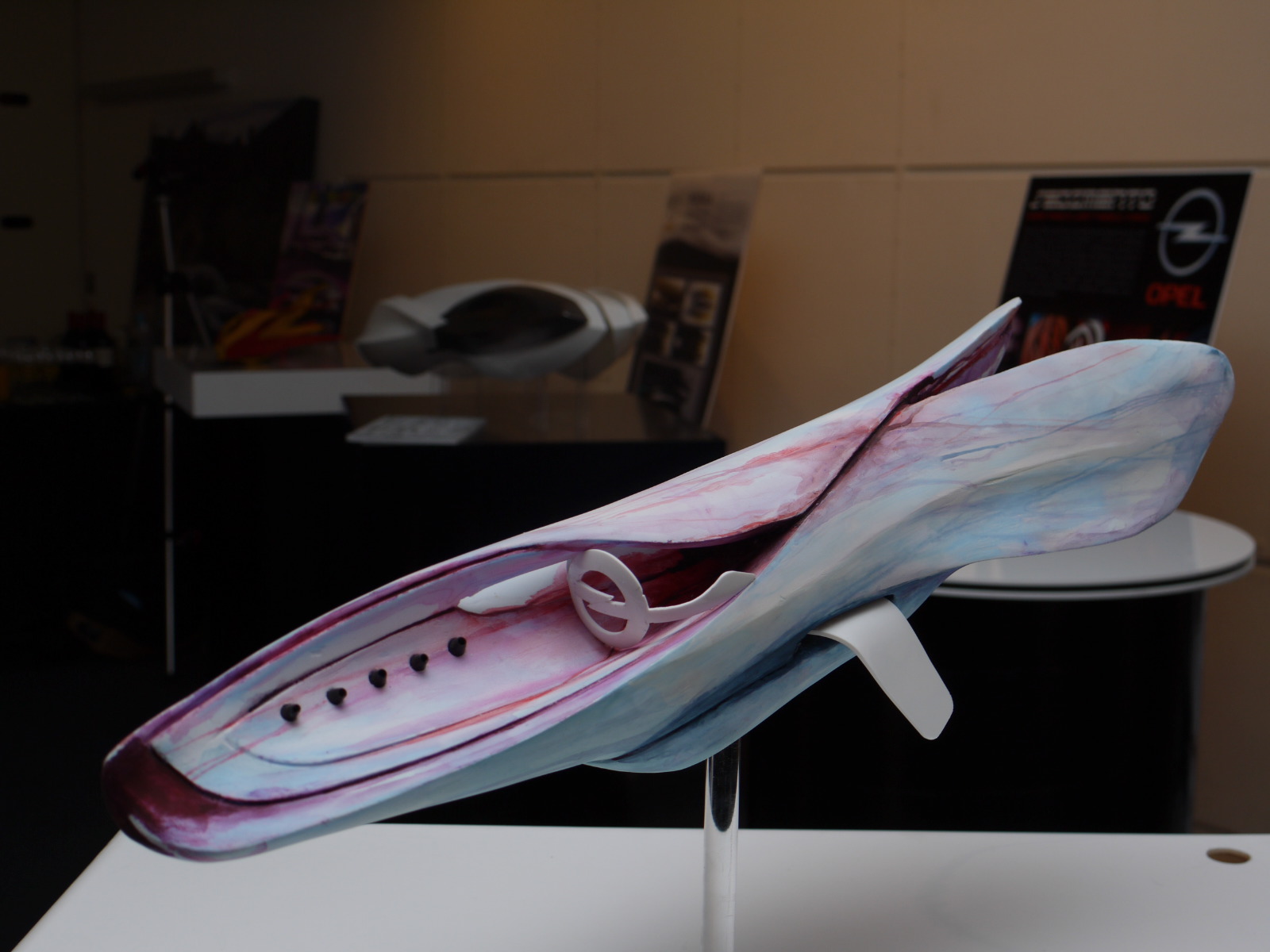 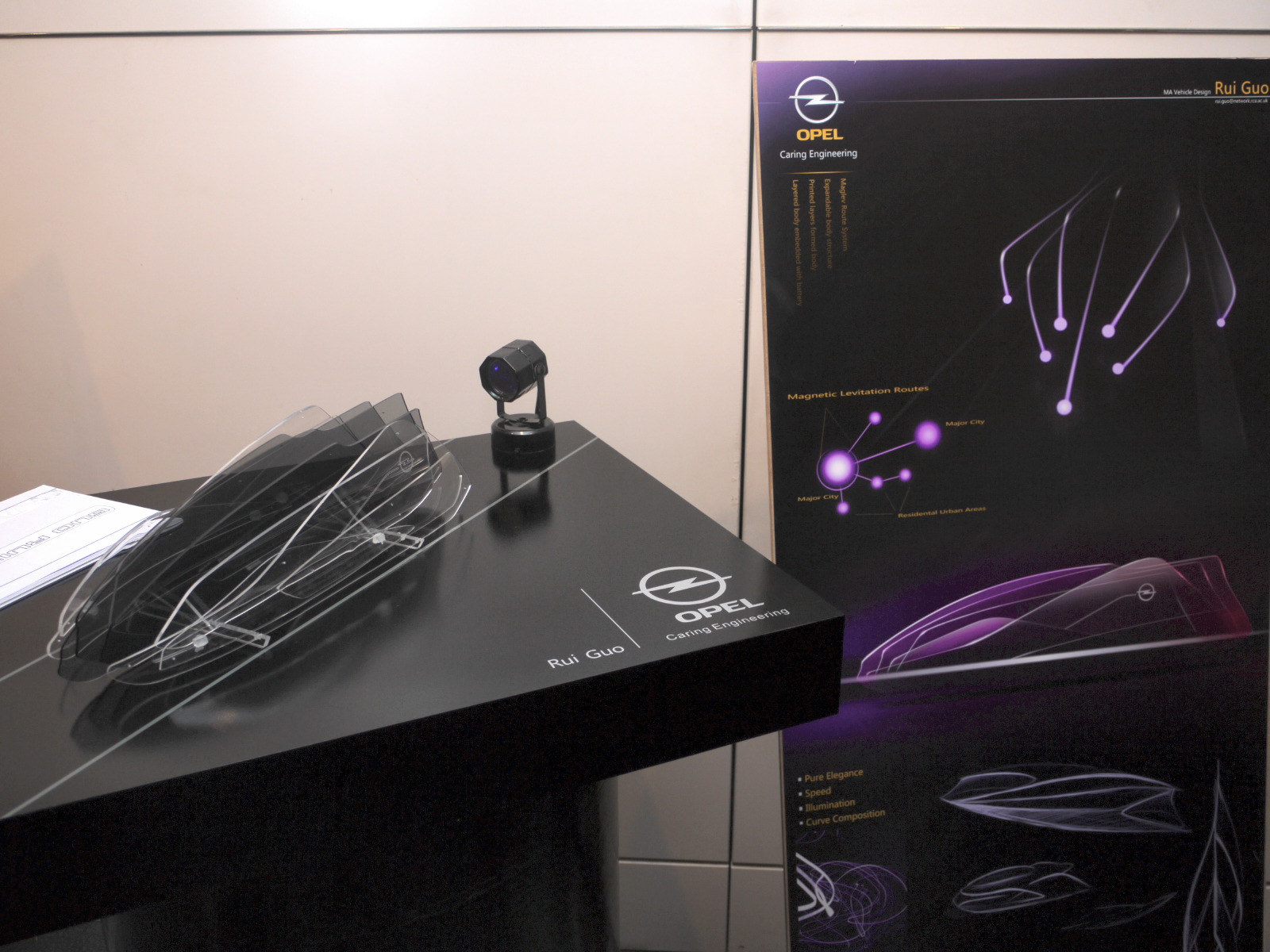 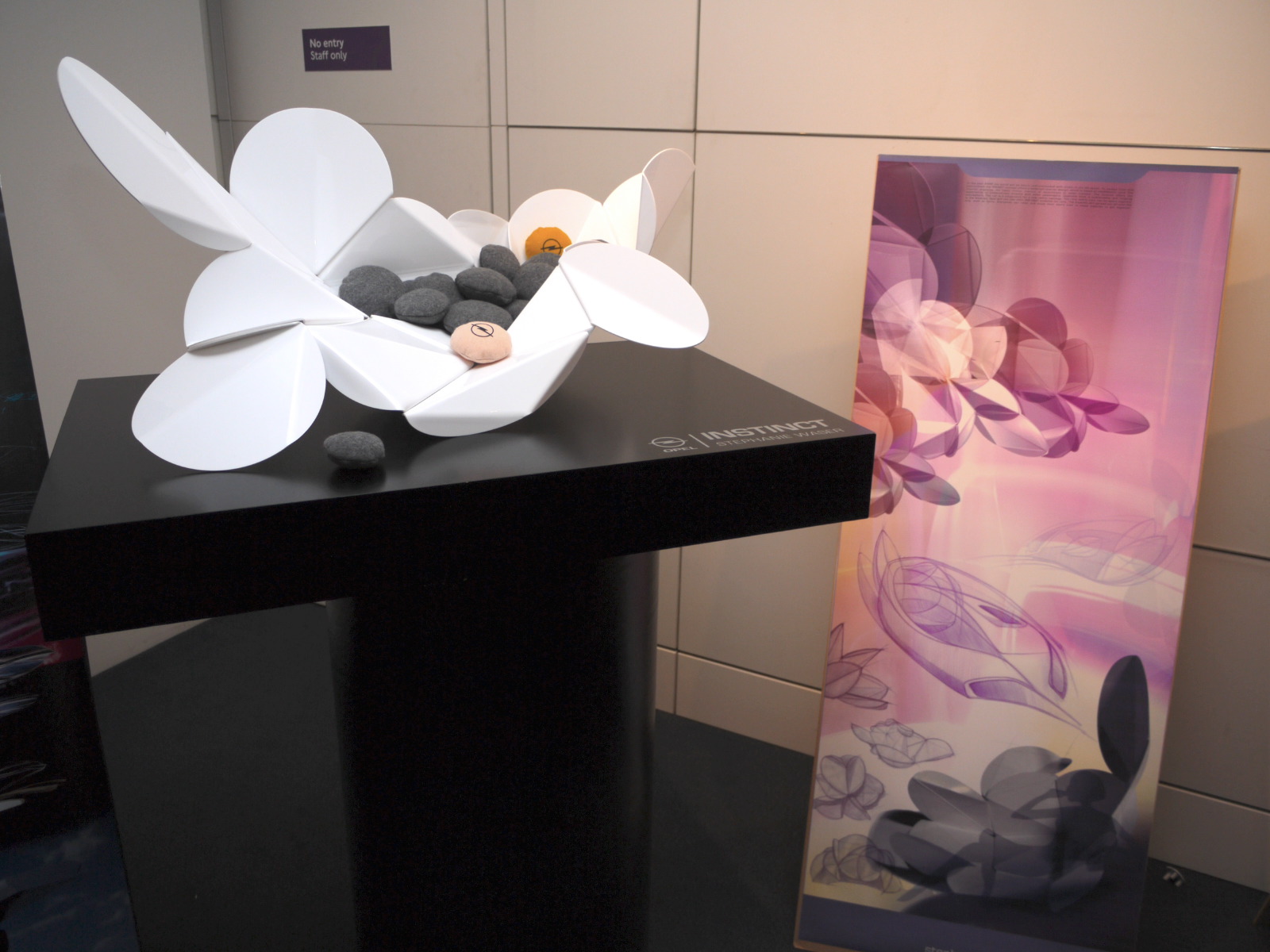 First year students at the Royal College of Art recently held an exhibition at the London Transport Museum commemorating the 40th anniversary of the school's vehicle design course. Sponsored by GM's Opel/Vauxhall division, 19 students responded to a brief that called for them to ‘Fast Forward into the Future'. Divided into three groups - Inside Out, Urban Flow and Automark - the students devised their own notions of vehicles for the year 2049, and in some cases entirely reinvented Opel brand values and aesthetics. Here is an overview of their projects: 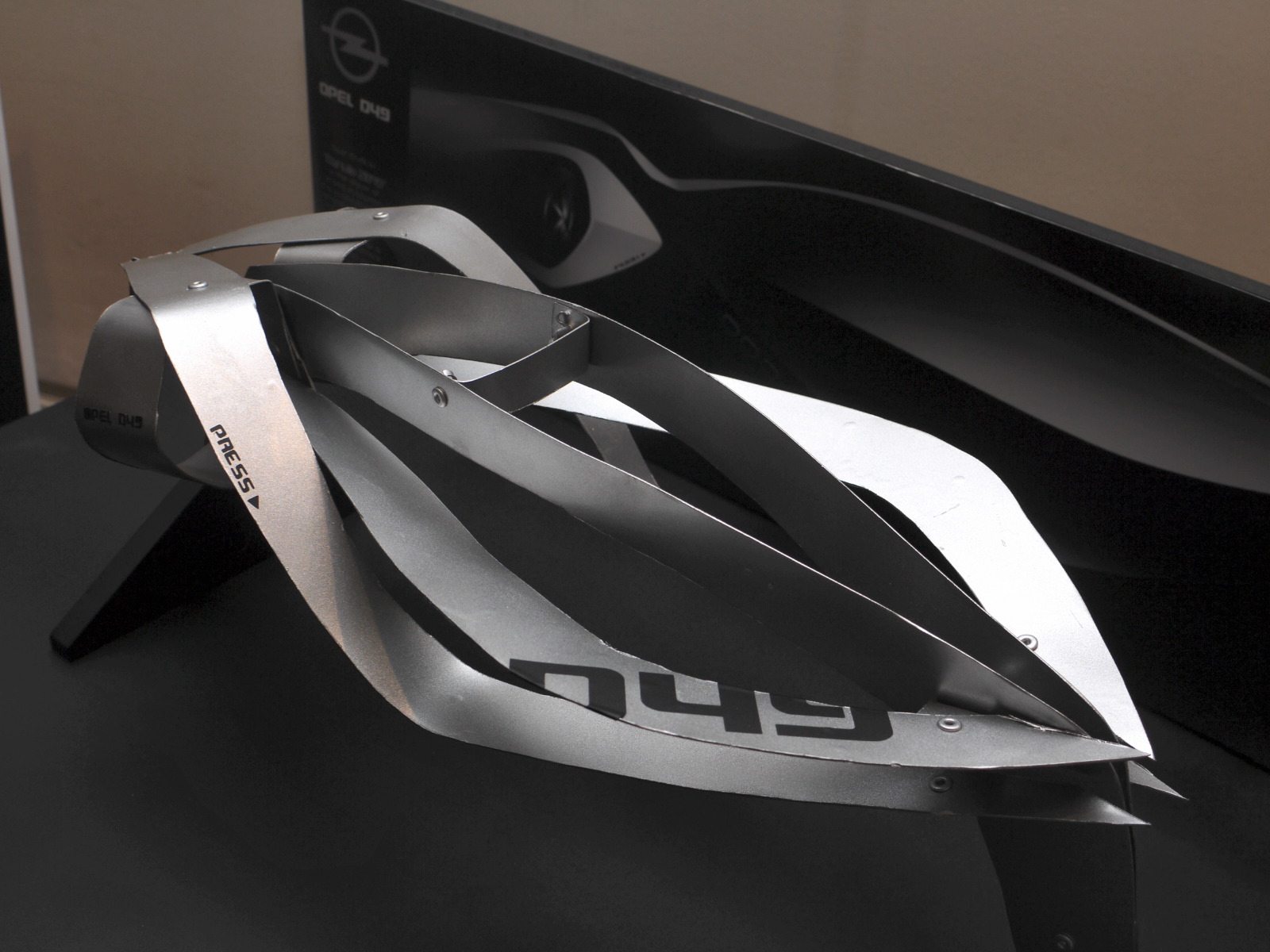 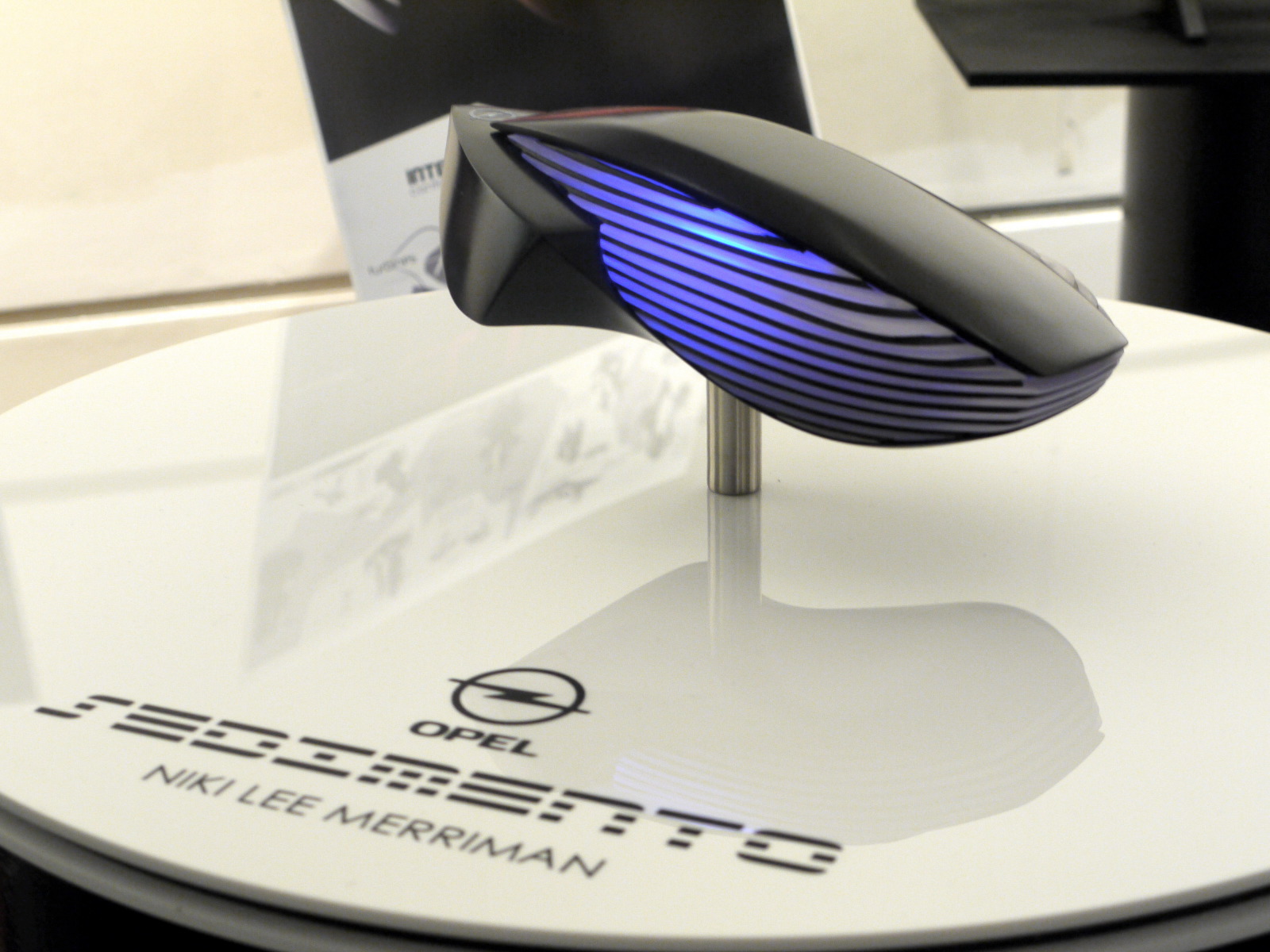 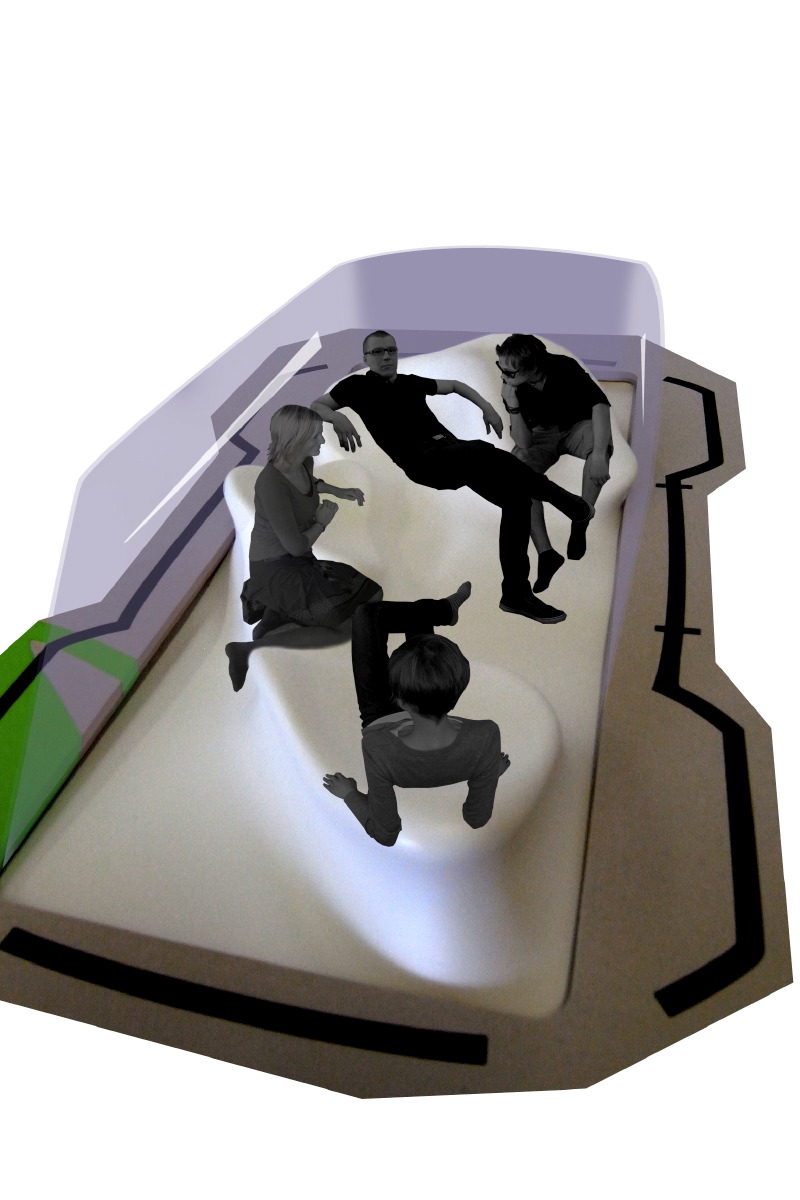 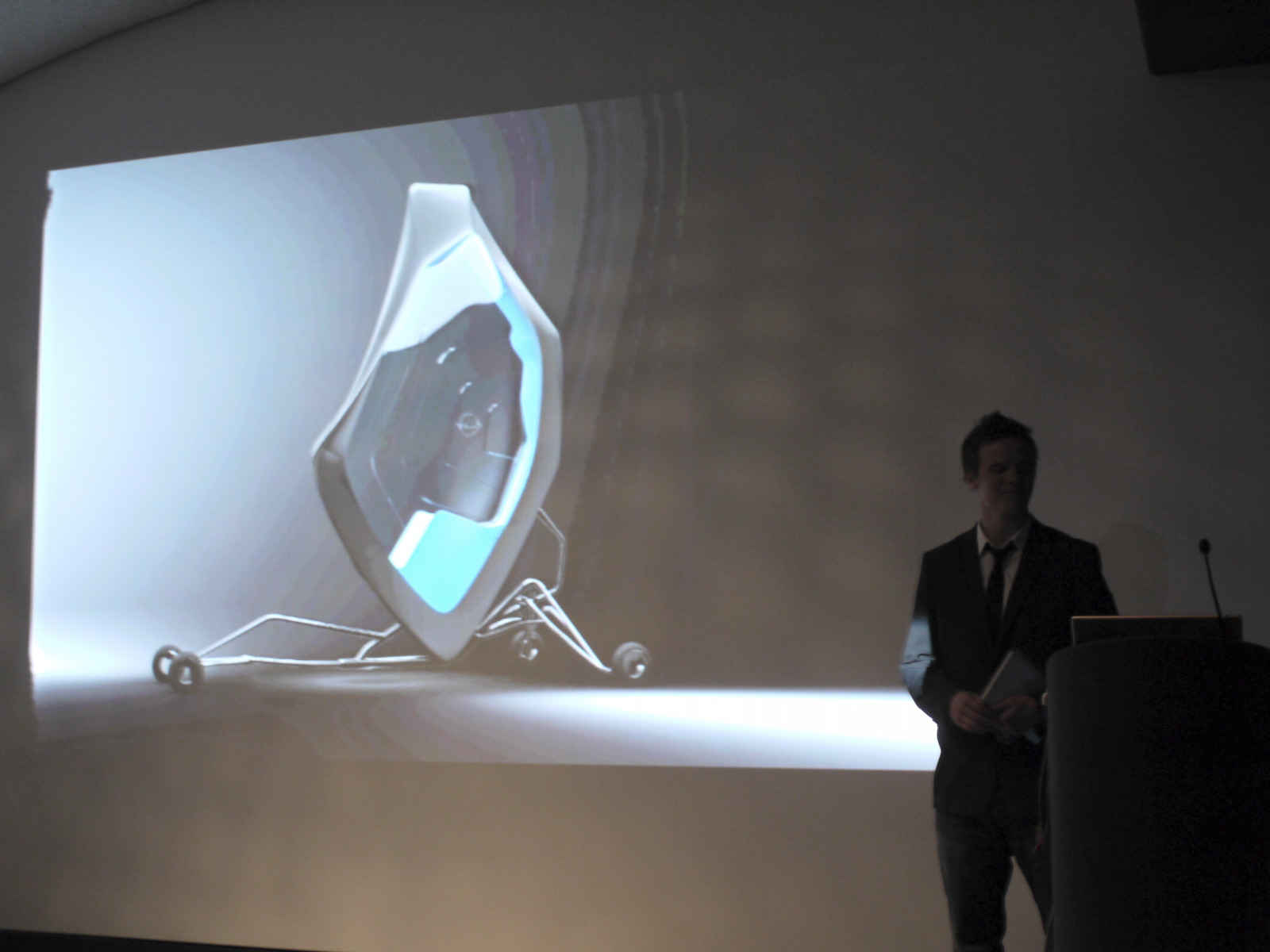 Opel D49
Augustin Barbot
Barbot won the coveted three month internship at General Motors' European Design Centre in Rüsselsheim thanks to his innovative Opel D49 (or Darwin 2049) concept. Devoid of wheels, the vehicle hovers 10cm above the ground by electro-magnetic power or in the sea like a submarine. "It's an evolution to another transportation system," Barbot told CDN. The frame, made of aluminum and covered by a semi-flexible clear, waterproof resin, is an essential part of elegant and atypical design, influenced by aerodynamic and organic shapes.

Sedimento
Niki Merriman
Based around a family oriented end-user named Ethan Blake, Merriman created a concept that was predominantly influenced by sedimentary layers in rocks. The emotional, pure and clean vision for a two-seater vehicle features transparent body layers that reflect the mood and feelings of the user through color. Personalized images can be displayed on the exterior via fiber-optic light communicating the user's own style. Themed for use in urban centers, the aerodynamic vehicle is powered by MAGLEV technology and has no wheels, running instead on designated tracks around the city.

Opel Modula
David Seesing
The Opel Modula concept enables future Opel customers to actively take part in the creation of their vehicle. Via a ‘modular editor' online interface, the customer can create a vehicle to suit their individual needs. Users choose from a variety of cabins, which defines the vehicle size and number of passengers. The body panels - made from 100 percent recyclable bio-resin - offer infinite personalized possibilities and, should the customer wish to change the vehicle, old parts are returned to Opel and either recycled or reintroduced into the system.

Interior concept
Anna Geiger
Greiger devised a concept that is a departure from current 'antiquated' car interiors. Using a form experiment method of putting plaster in bottles, three interior variations were born, enabling "a playground for social interaction". Using autonomous vehicles as the premise for her design, traditional seating arrangements make way for a new architecture, which allows all passengers a more flexible way to spend their time inside a vehicle.

Opel Lillia
Dalibor Pantucek
Inspired by nature and blooming flowers, the Opel Lillia has two front wheels while the rear end floats. "I was trying to develop a new way of transport," Pantucek told us. The rear ‘wings' cover the interior of the vehicle when parked, creating an artistic sculpture. When the vehicle starts, the wings open to form a multicolored sculptural shape.

Opel Icarus
Anand Krishnan
Inspired by birds in a flock formation, the Opel Icarus glides through the air like a flute, creating a new sound for electric vehicles. Its overall aesthetic was inspired by feathers that show different color as they move and it features wings and a lightweight hollow structure inspired by bird skulls. Propelled by MAGLEV technology the concept also uses the principles of slipstreaming, which results in a collective aesthetic where every vehicle is seen flowing with each other in pattern formations.

Caring Engineering
Rui Guo
With its wheels hidden inside the body when being driven on MAGLEV tracks, Guo's proposal is for an electric vehicle inspired by illumination movements. His goal was to create "a vision of purity and elegance displayed by curves," with an expandable body structure that allows the car to morph from a two to four passenger vehicle. The composition of lines and layers implies different possibilities for shaping future vehicles.

Flow concept
Miika Heikkinen
Coined an 'organic-mechanic' design by its maker, the zero-emission Flow concept is a vehicle created for use in urban centers. One of two highly commended projects, the single seat vehicle was inspired by the marine creature nautilus and light patterns on images taken at long shutter speeds. It features high contrast design elements that adapt to the environment, becoming part of the infrastructure when not in use. The ability to personalize the structure and ergonomics also enables a different travel experience.

Instinct
Stephanie Waser
Inspired by philosophers Harry Harlow and Archimedes, the Insinct concept is a proposal for different modules encompassing the brand values of Opel. With an underlying theme of service, Wasser's goal was to create "a whole brand of a whole image" for Opel. As such, her concept could be used in the city, train, car or home, as an escape from the overload of media in 3D space. The Instinct concept offers a balanced interior design, which is based on mathematic rules; supporting the basic human instinct of attachment to other humans. The cushions form a comfortable and relaxing atmosphere for a new form of family in the year 2049.