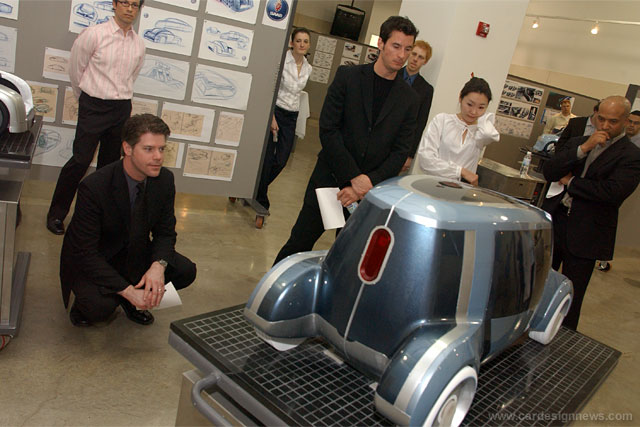 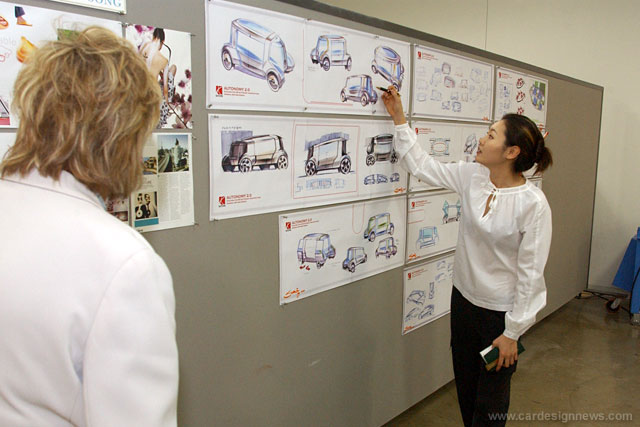 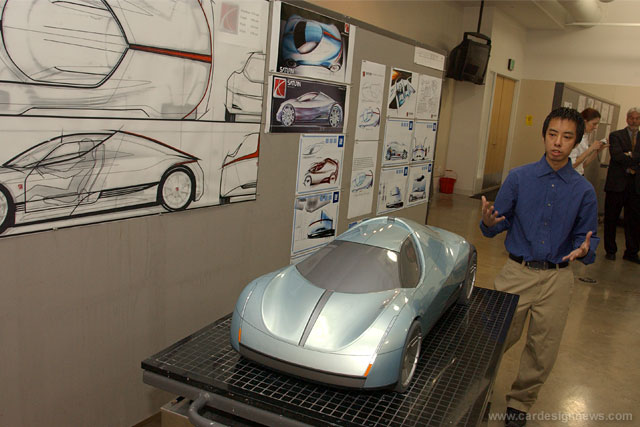 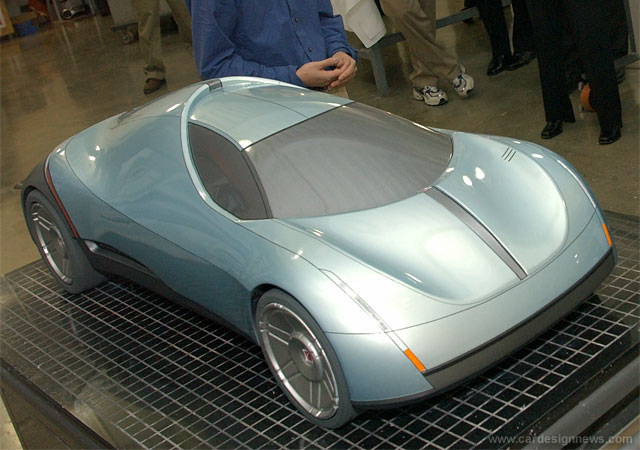 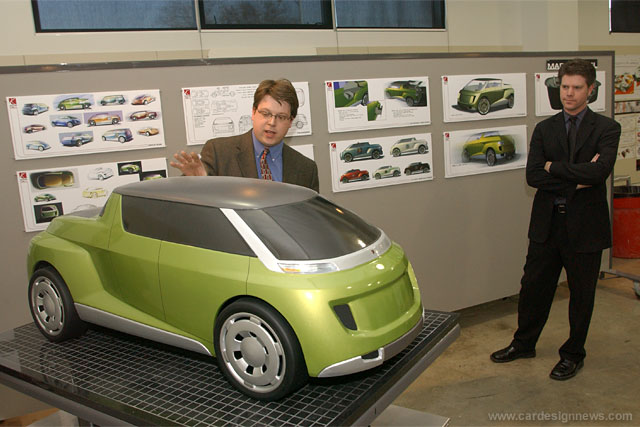 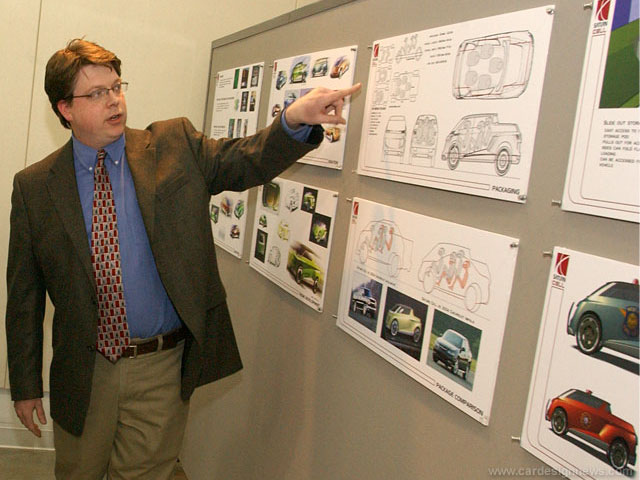 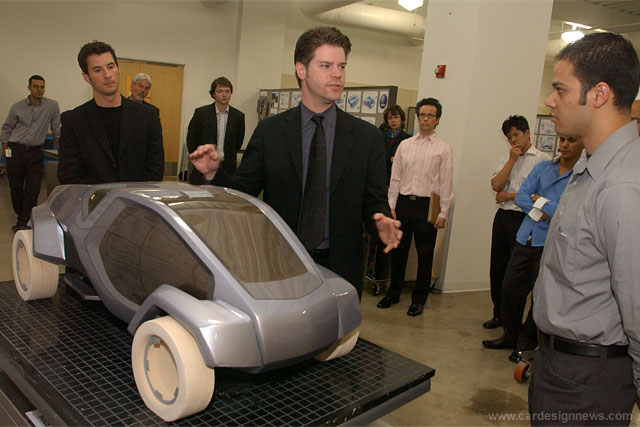 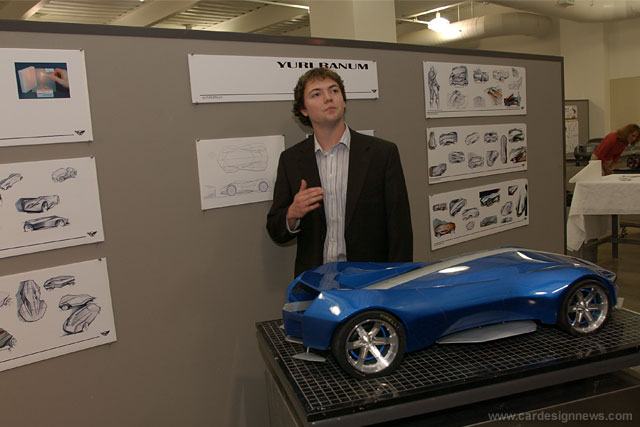 Yuri Ranum
Final year Transportation Design students at Detroit's College for Creative Studies have presented the results of a GM-sponsored project, to design a GM vehicle for the year 2020. The proposals were to be based on the skateboard-shaped chassis of the Autonomy fuel cell concept shown at the 2002 Detroit Auto Show. This was one of several manufacturer-sponsored projects that were presented in the lead-up to the annual CCS Student Exhibition, which opens this Friday May 14.

The Autonomy concept features a 20-year chassis life expectancy, drive-by-wire vehicle controls, and allows for a wide range of body styles to be fitted. The students were to determine the purpose of the design, identify the target customer, develop the vehicle for one of the GM brands, determining the appropriate body style, and creating a basic package of the design.

Sung-yeah Song's proposal targets single people between 27 and 35, who meet and travel together in their leisure time. The design concept offers a comfortable place for a social group to meet, travel and socialise. The interior is designed to hold 5-6 people, with the seats on a revolving rail. Each seat has an extra area connected to it for the passengers gear: shopping bags, phones, laptops, or digital music players, giving each passenger their own personal space. The seats revolve to allow easier access to the car. The exterior of the car has an oval shape when seen from the top, which relates to the interior design.

Lawrence Yeung presented Saturn Retract, an open-air and closed hardtop roadster looking at fighter jet design with a retracting canopy. The vehicle features a retracting roof that slides in the rear of the vehicle without comprimising interior storage unlike mechanical folding roof convertibles. The roof runs on a center spine that incorporates a T-bar design for structural strength. The roof panels can also be retracted individually. Saturn's signature upswept lines define the exterior. A distinctive sweeping tail light design is integrated into the flow of lines and runs down the center spine. The interior continues Saturn's sweeping curve with a 'split design' theme on the seats and IP. The interior is packaged tightly and uses a small steering wheel for a sporty cockpit feel. The IP would feature LCD information screen and navigational systems. Wheelarch vents direct air into the body for drive motor cooling, and the side skirts expose the autonomy's heat sink chassis cooling.

Mark Surel, who worked as a clay modeler at Ford before entering the CCS design course, presented Saturn Cell, a five-passenger vehicle featuring a distinct occupant and a storage cell. Mark approached the design problem as a sculpture, focussing on the interaction of the forms as much as the forms themselves. The passenger and storage cell set up the dramatic plan view of the vehicle, which leads to the main graphic theme of the vehicle, the zig-zag that is then created between the upper hull and the lower platform pieces. The Saturn 'swoosh' on the bodyside incorporates the platform. The rear features side, top and rear access to the storage cell.

Rudy Ghaly's truck concept took advantage of the absence of an engine and suspension in the traditional manner. "I decided that the overall proportions and shape of the vehicle was the first to be redefined by trying not to break-up the vehicle in the traditional truck manner by having a massive hood, a defined passenger cabin and a long truck bed that extends from behind the cabin." Encapsulating the bed of the truck between the Autonomy platform and the main body compartment, results in the lack of a main body break that is normally found between the cabin and the bed of current trucks. This enhanced the unified form vocabulary and the overall balance of the design. Since there is no engine in the front of the vehicle, access is through a front hatch opening, along with a secondary hatch at the rear.

Yuri Ranum's proposal focused on the consumer that has an Autonomy-based minivan or SUV, yet also wants something fun to drive for enjoyment or track use. To make the vehicle as low as possible despite the relatively thick platform, the driver has been positioned so that they lay on their stomach in a head-first street luge position. A new type of transparent aluminum is used for the body. This allows the driver a good view while driving. The form vocabulary draws inspiration from the guitarfish, with soft edged angular forms that taper in triangular patterns. Active aerodynamic pieces extend and retract for high speed stability. The large rear spoiler and small secondary rear air vanes are also used as airbrakes to slow and stabilize the car at high speed. Headlights and taillights are hidden beneath the colored transparent aluminum, appearing only when lit. The center panel is replacable with one with a more convential canopy, and the seat is reconfigurable to a convential seating position.

The CCS students benefit from a wide range of support from the automotive industry. While the seniors worked on the GM project, juniors in the studio next door worked on an assignment from specialty vehicle maker ASC to create the next-generation of open-top vehicles. Another group worked on a project assigned by Renault, and another project had students designing vehicles that make extensive use of aluminum, sponsored by aluminum maker Alcan.

In addition to the support from visiting GM, Ford and Chrysler designers, CCS's transportation design program has associations with foreign car companies and their designers. Toyota is supporting a visiting speakers program, and many foreign makers have Detroit-area design operations that lend their support to the school.

For 79 years, the College for Creative Studies Student Exhibition has been one of Detroit's major and cultural community events. On Friday, May 14th the 79th Annual College for Creative Studies Student Exhibition will open with a patron preview from 5:30 until 10pm, and a public preview 7pm-10pm. Tickets for both events can be purchased by calling 313 664 7464.

From May 15th through May 28th, the exhibition is free and open to the public,10am-4pm Saturday through Wednesday, and 10am-8pm Thursday & Friday. The College for Creative Studies is located at 201 East Kirby in the Cultural Center in Detroit.