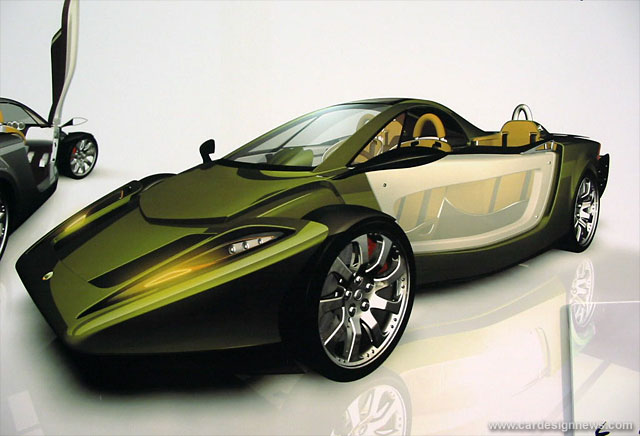 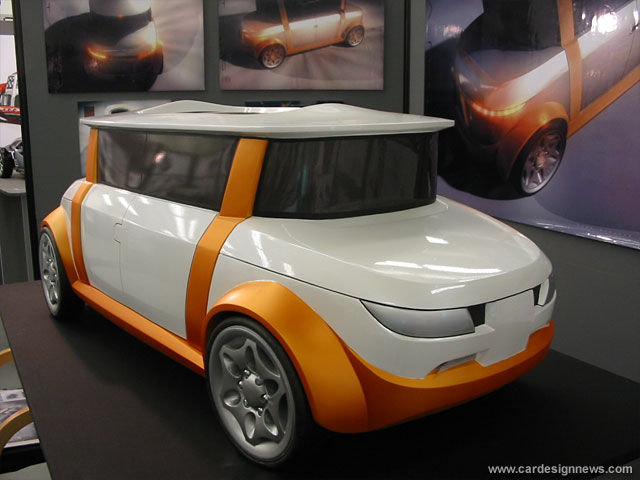 'Drive back to the Tang Dynasty' by Chenwei Gao 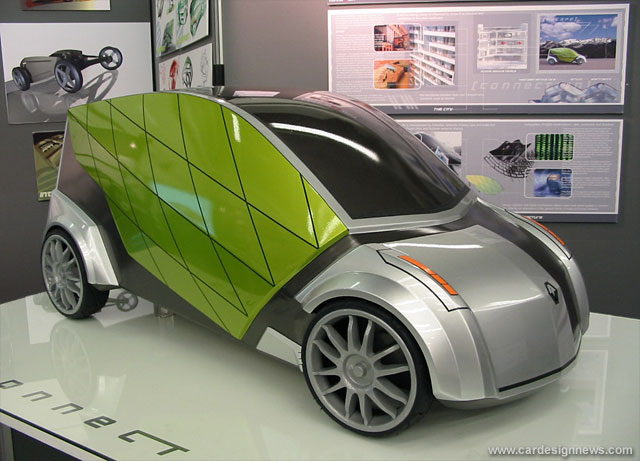 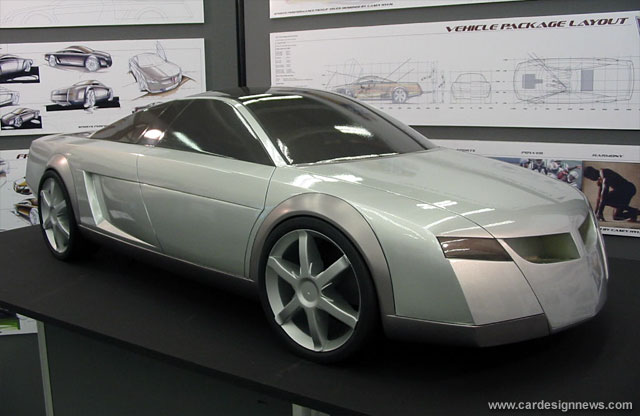 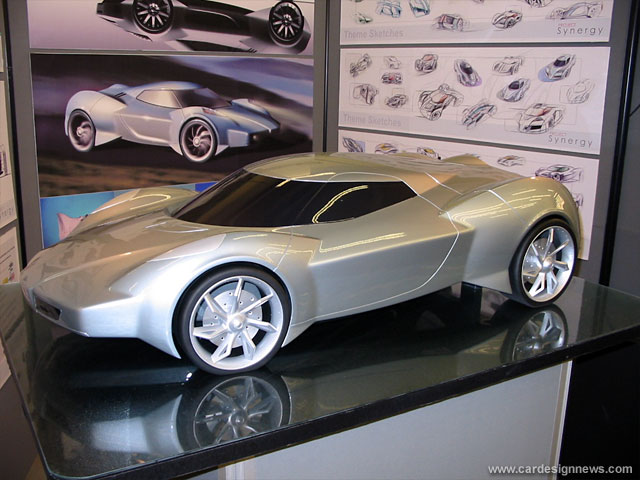 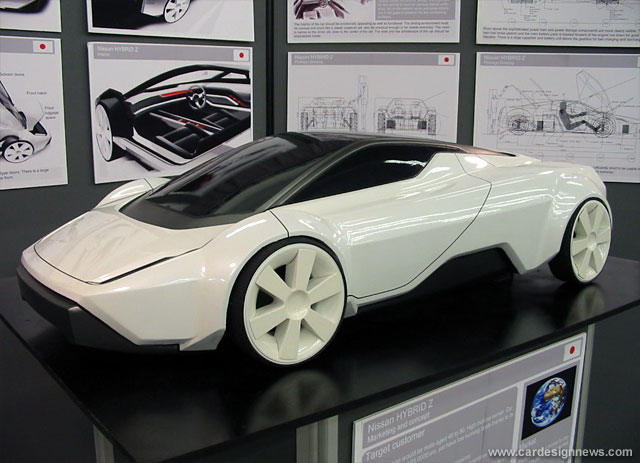 The show presented 26 students work and was one of the first exhibitions to be staged in the new Bugatti Building, a recently completed £2 million full-size vehicle modelling studio next to the main School of Art and Design. 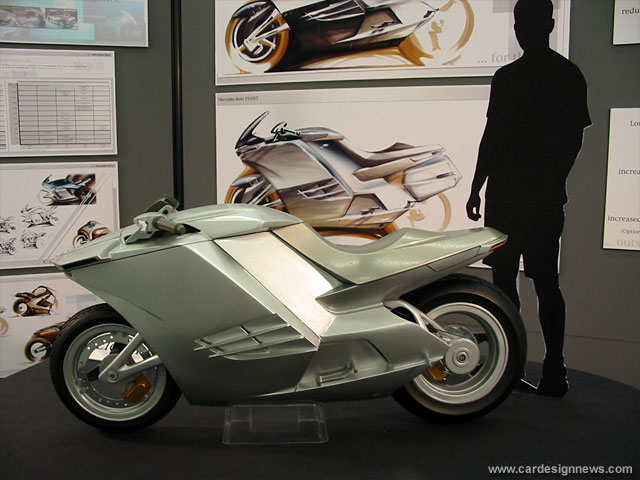 The projects on show cover the full spectrum of vehicle concepts. Particular topics this year were environmentally friendly hybrid supercars, urban microcars and future cars for China. The course has a strong international presence, with students from Brazil, Belgium, China, Taiwan, Finland and Australia among this year's graduates and this contributed to the wide variety of work on display.

An industry seminar, sponsored by Corus, was also hosted on the opening evening at the University's TechnoCentre with Jon King, Director of Corus Automotive, presenting the awards for Best Vehicle Design to the following students:

Meng Feng Hsieh showed a Lotus 2x2 midship racing car targeted for China, which could accommodate a driver and three passengers so that the experience may be shared among groups of enthusiasts. The concept takes the idea of 2-seater F1 cars a stage further, enabling track skills to be learned more quickly and at much less cost than at present and to kick-start a strong following for motorsport in China. The design was modelled and animated entirely using Alias software and was commended by the judges as a fine example of creative thinking and virtual modelling techniques.

Chenwei Gao's second place concept was called 'Drive back to the Tang Dynasty'. Using the forms, colours and architecture of the famous Chinese period, Chenwei produced a concept that deliberately sets out to appeal to the new car buyers in China whom, he feels, increasingly want a vehicle with an inherently Chinese character rather than an imported western or Japanese one.

Tom Webster's design, entitled 'Connection', was for a mobile fuel cell room, which could be used to power homes and offices at either end of a journey. A former architecture graduate, Tom also designed the interior to act as an additional relaxation space for new home apartment blocks, where the vehicle is parked and attached to the side of the building. To show the concept to full effect he included a scale model of the whole building showing how the vehicles would add to the visual excitement of the architecture.

Australian student, Casey Hyun chose a sporty Pontiac pick-up influenced by European design for his final project. The design harks back to former car-based models such as the El-Camino, rather than using a current truck or SUV platform, to achieve a low-slung, sporty proportion. The cab-forward stance, long rear deck and chiselled body surfaces all emphasise the horizontal aspect of the design. A two-piece rigid panel covers the loadbed to complete the sleek look.

Darren Jones showed an environmentally-friendly supercar which takes inspiration from aquatic forms such as killer whales and dolphins. The concept aims to change attitudes to supercars by repositioning them as more friendly status symbols that achieve stunning performance through using experimental, cutting edge technology. The form language takes a simple dihedral form and adds muscular wheelarches and sill fins in a similar way to some former GM concepts from the 1950's.

Continuing the supercar theme, a Nissan hybrid supercar was displayed by Jonathan Bowen. The styling was inspired by Japanese youth culture, and splits the form into two parts with an outer layer that acts as visual armour to add strength to the design and an inner, mechanical layer which is less dominant. This is most apparent from the rear view where the facetted surfaces and use of high contrast colours emphasise this split form.

A Mercedes F500ST motorcycle design was shown by Stavros Melabiotis from Crete. His aim was to see if Mercedes brand could be expanded below SMART and to design a motorcycle that embraces the heritage of a luxury automobile brand, while introducing a fresh elegance to motorcycle design. The styling clearly relates to Mercedes F1 and SLR cars and uses simpler and more solid surfaces than current motorcycle architecture, echoing Mercedes form language.