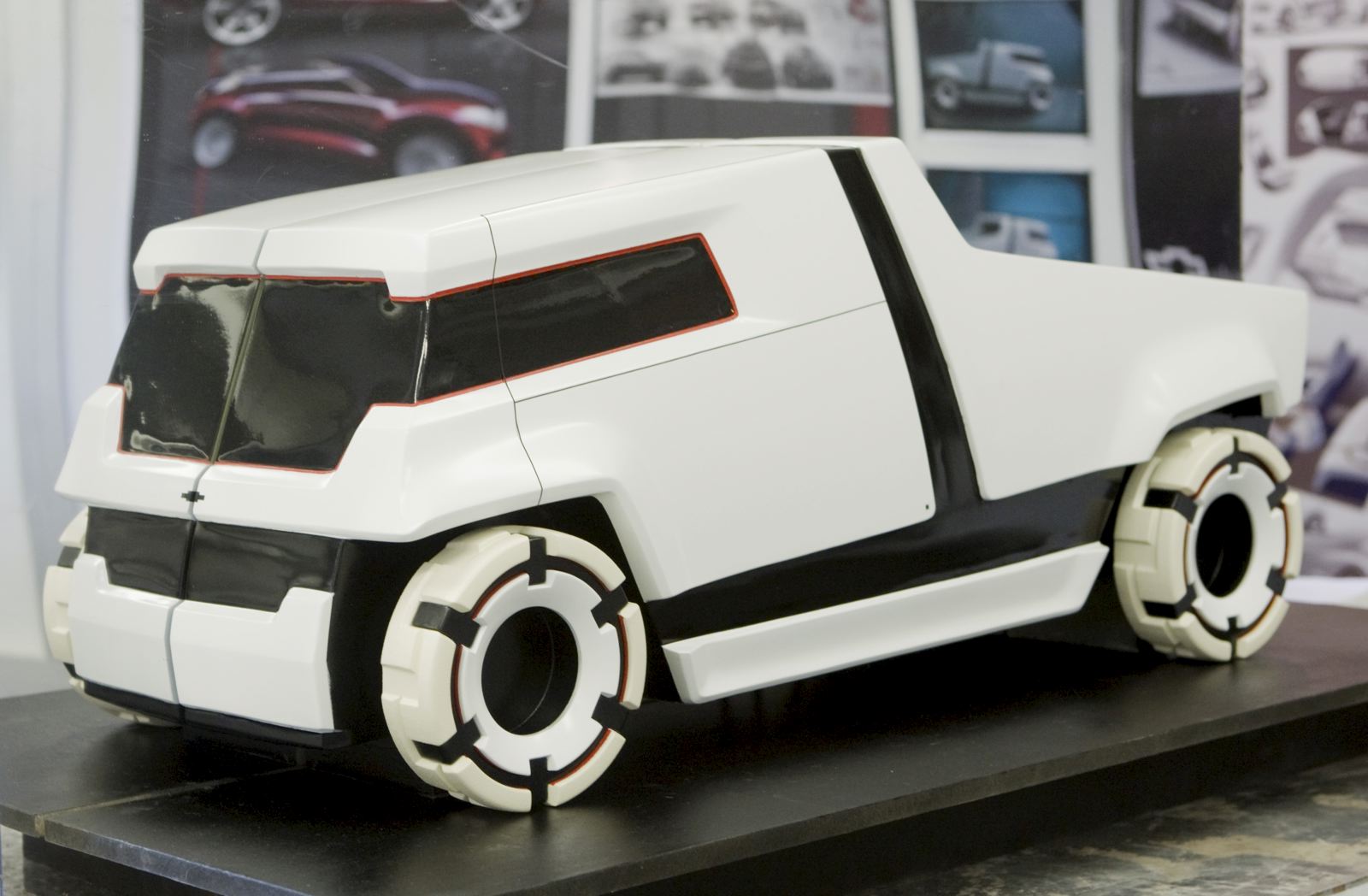 "Steadfast in 2030" by Jonny Wicks. Click for larger images 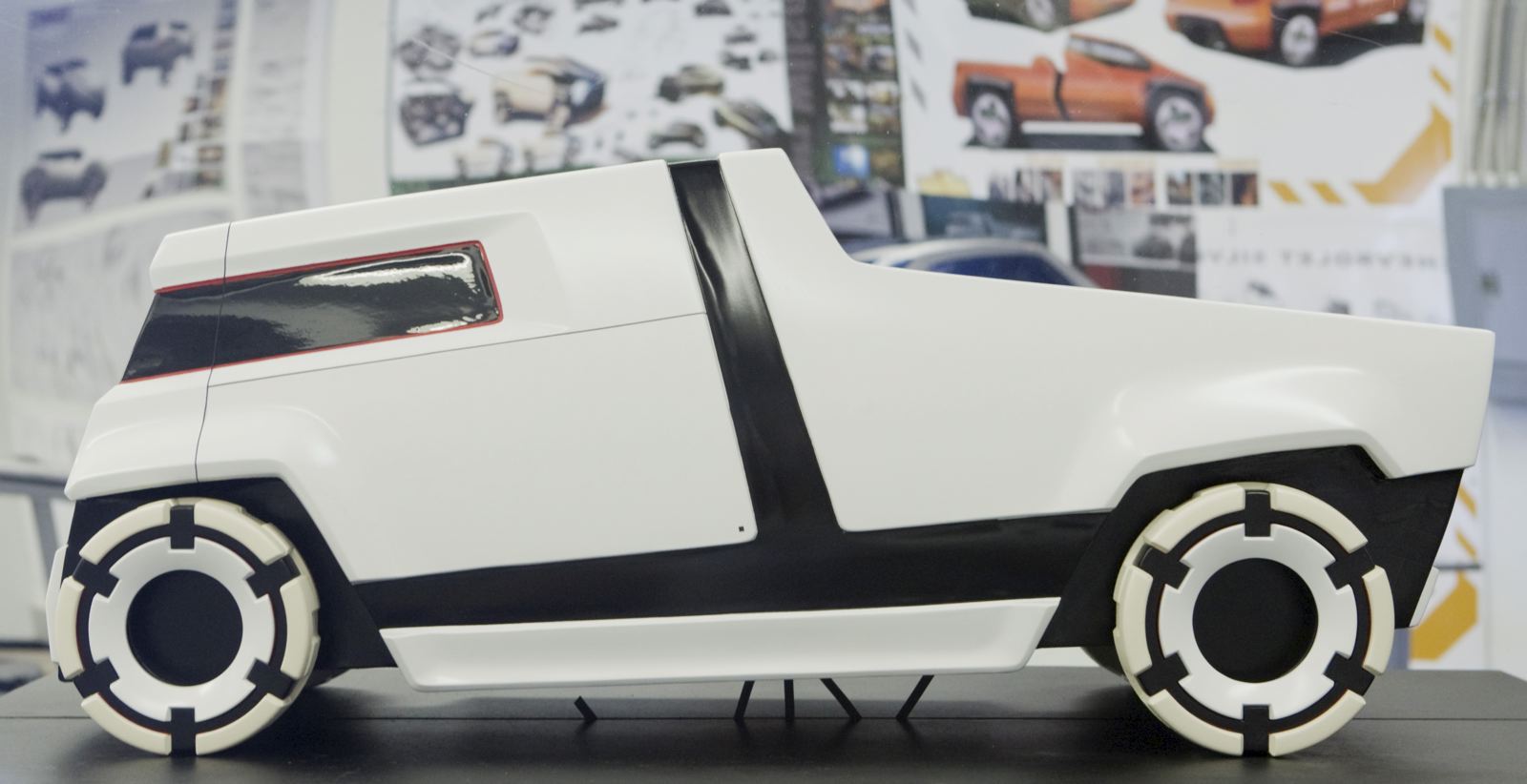 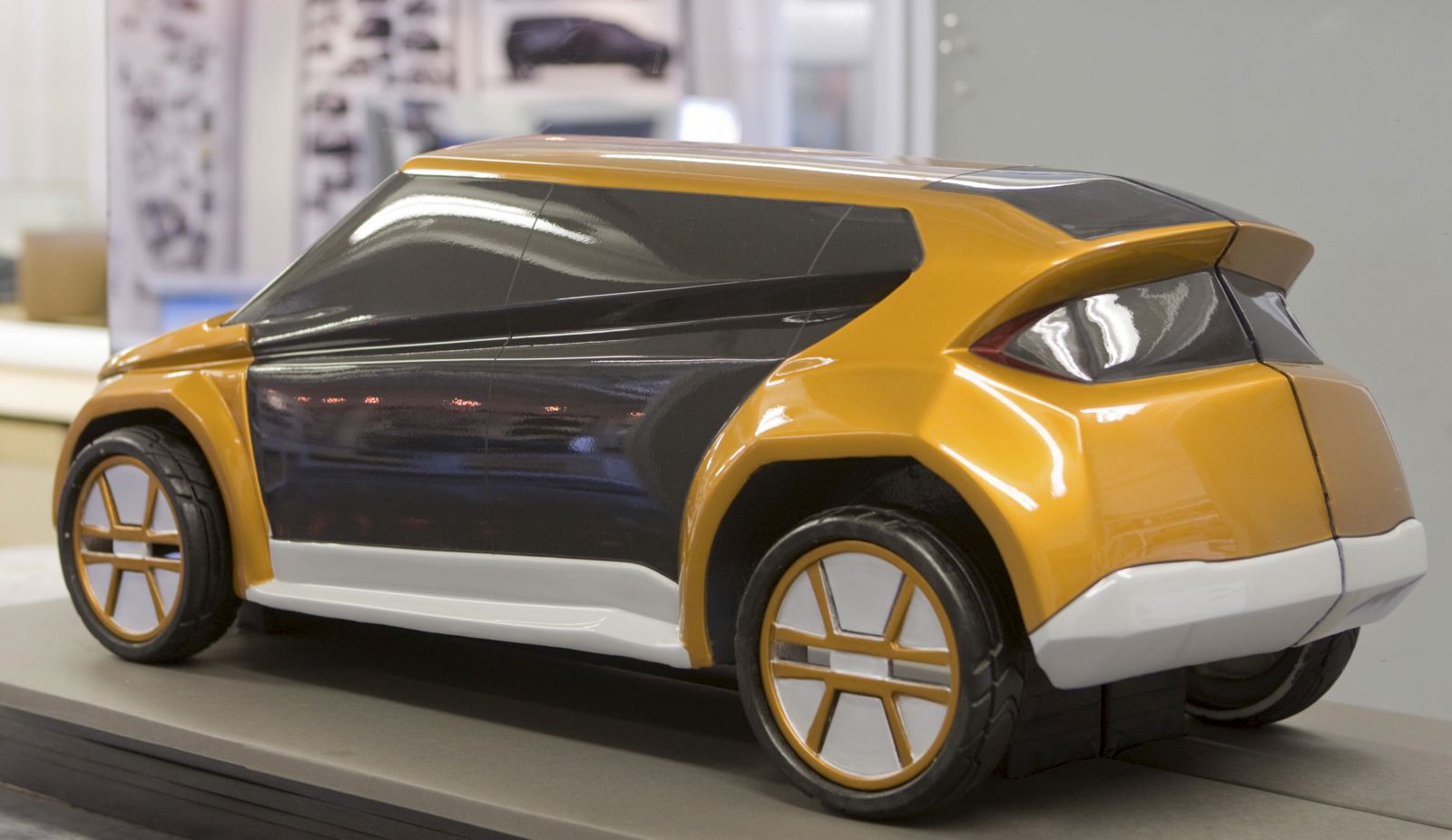 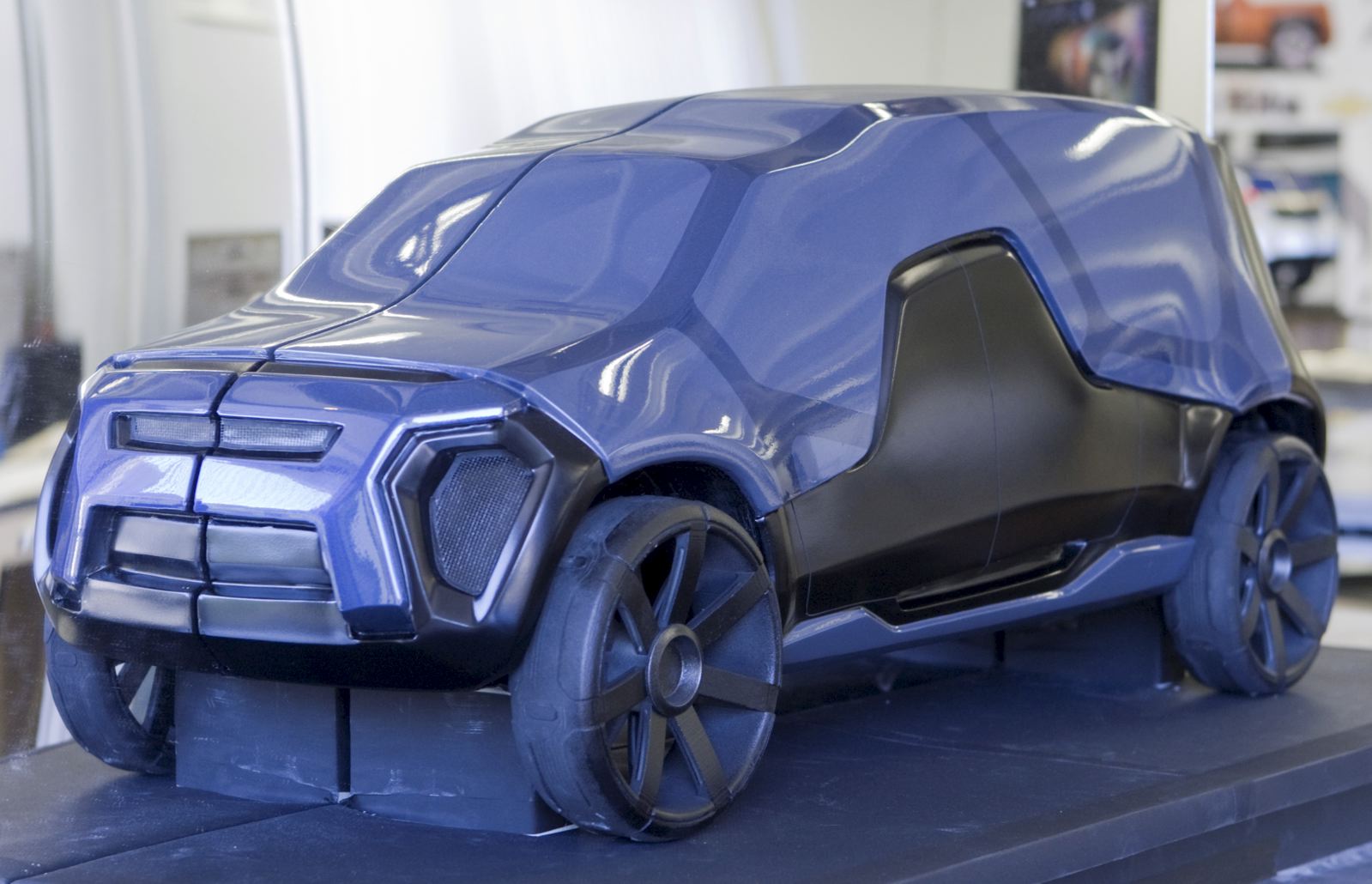 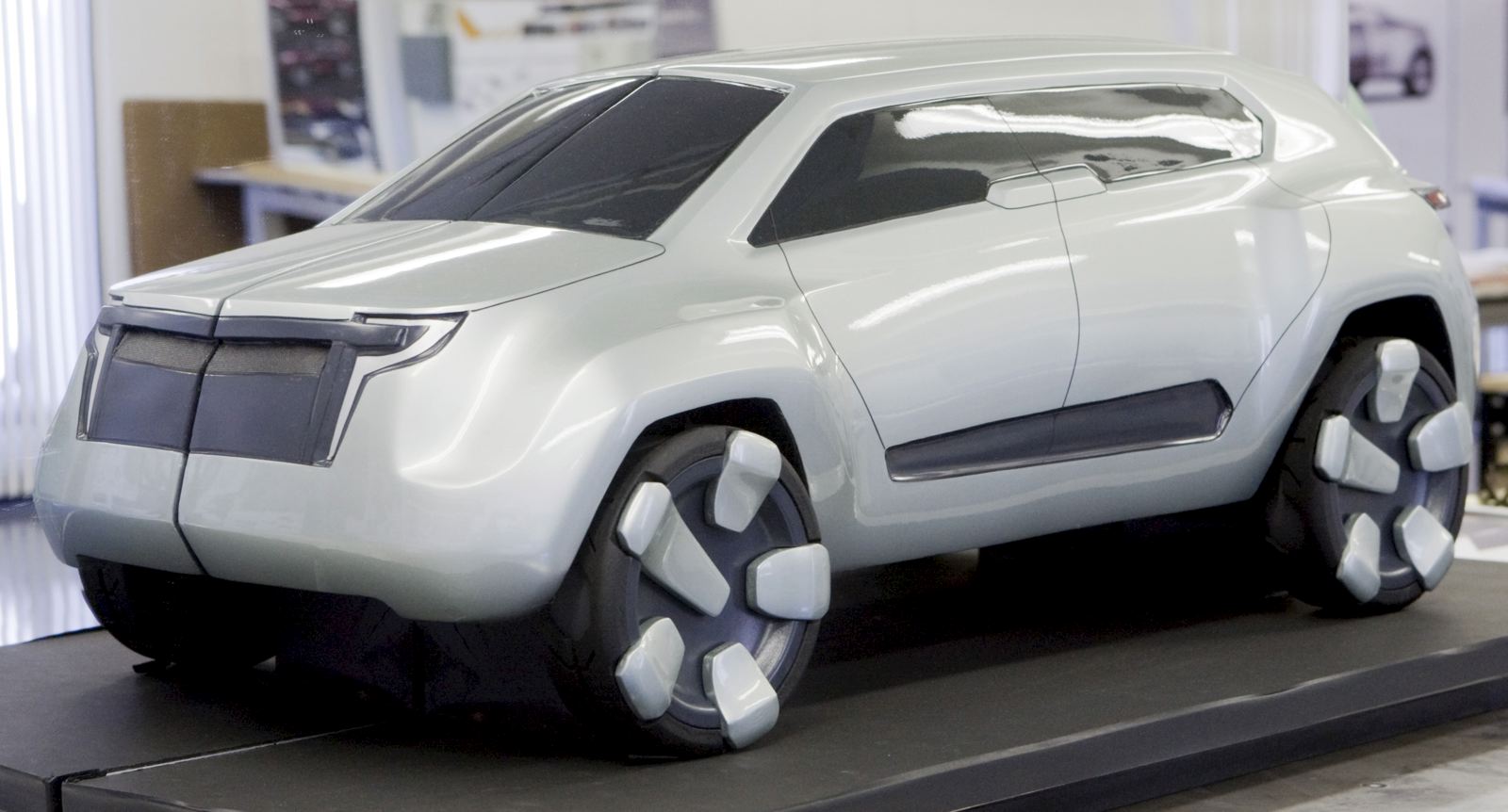 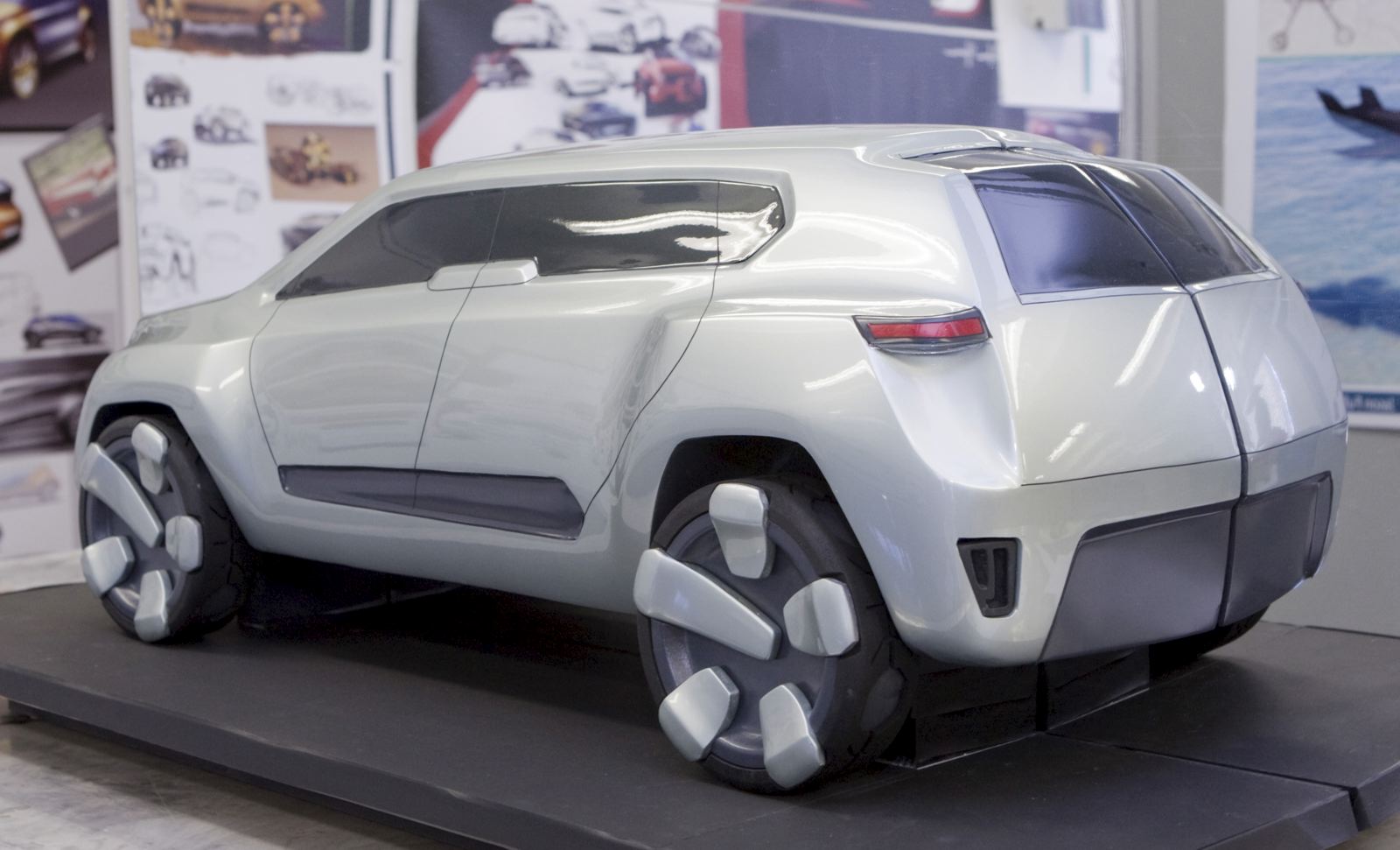 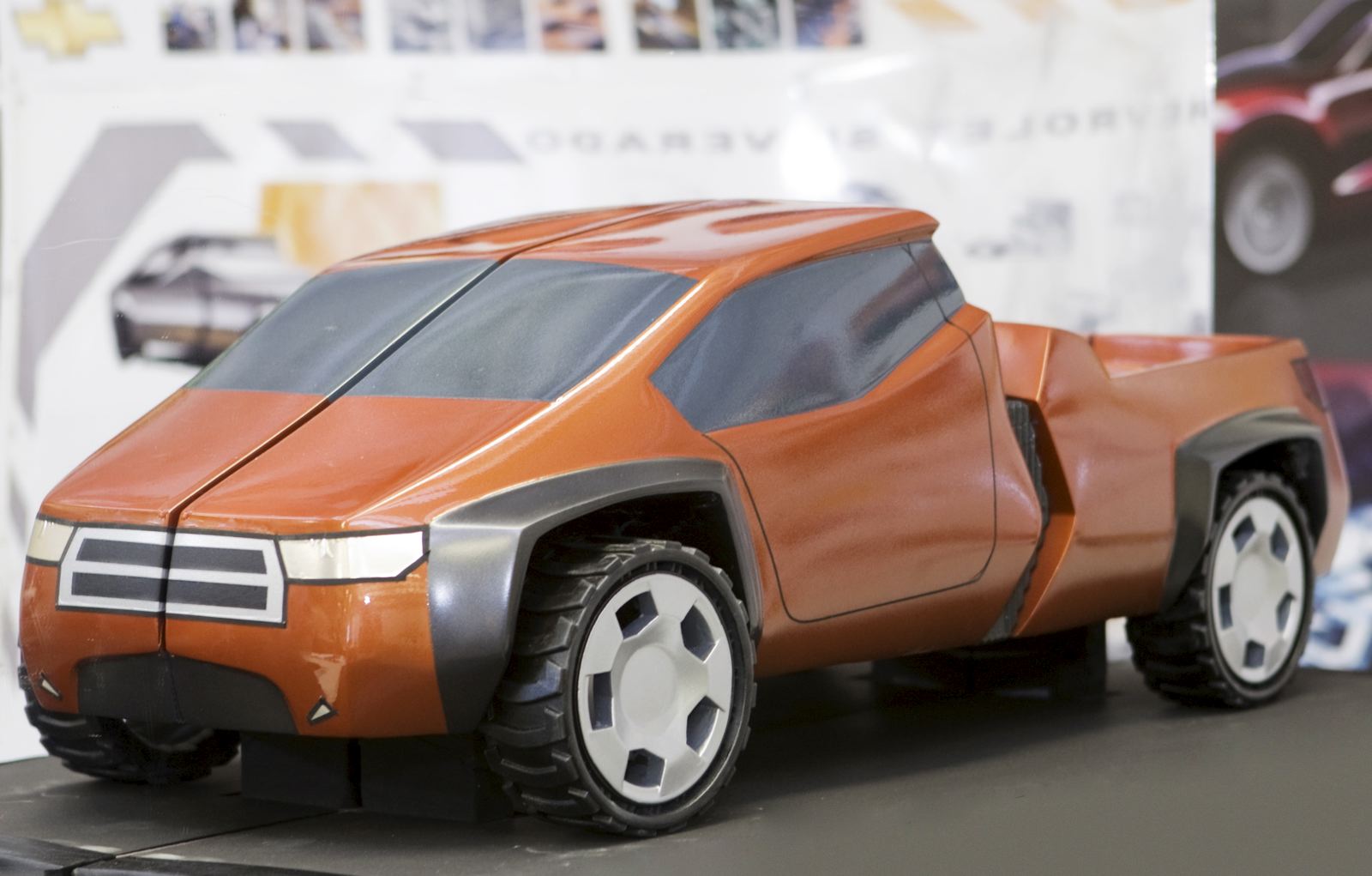 Students in the Transportation Design track at the University of Cincinnati recently presented their visions for the future of transport. Most of the students were asked to envision a vehicle for use in the year 2030 in a studio course sponsored by General Motors; a brief which asked students to push the design potential of the Chevy Silverado/GMC Sierra pickup truck or the Chevy Tahoe/GMC Yukon SUVs. Two graduating students also presented their visions for the automotive future, using the Volkswagen and Saturn brands as their launching pad. Here are the details of their projects: 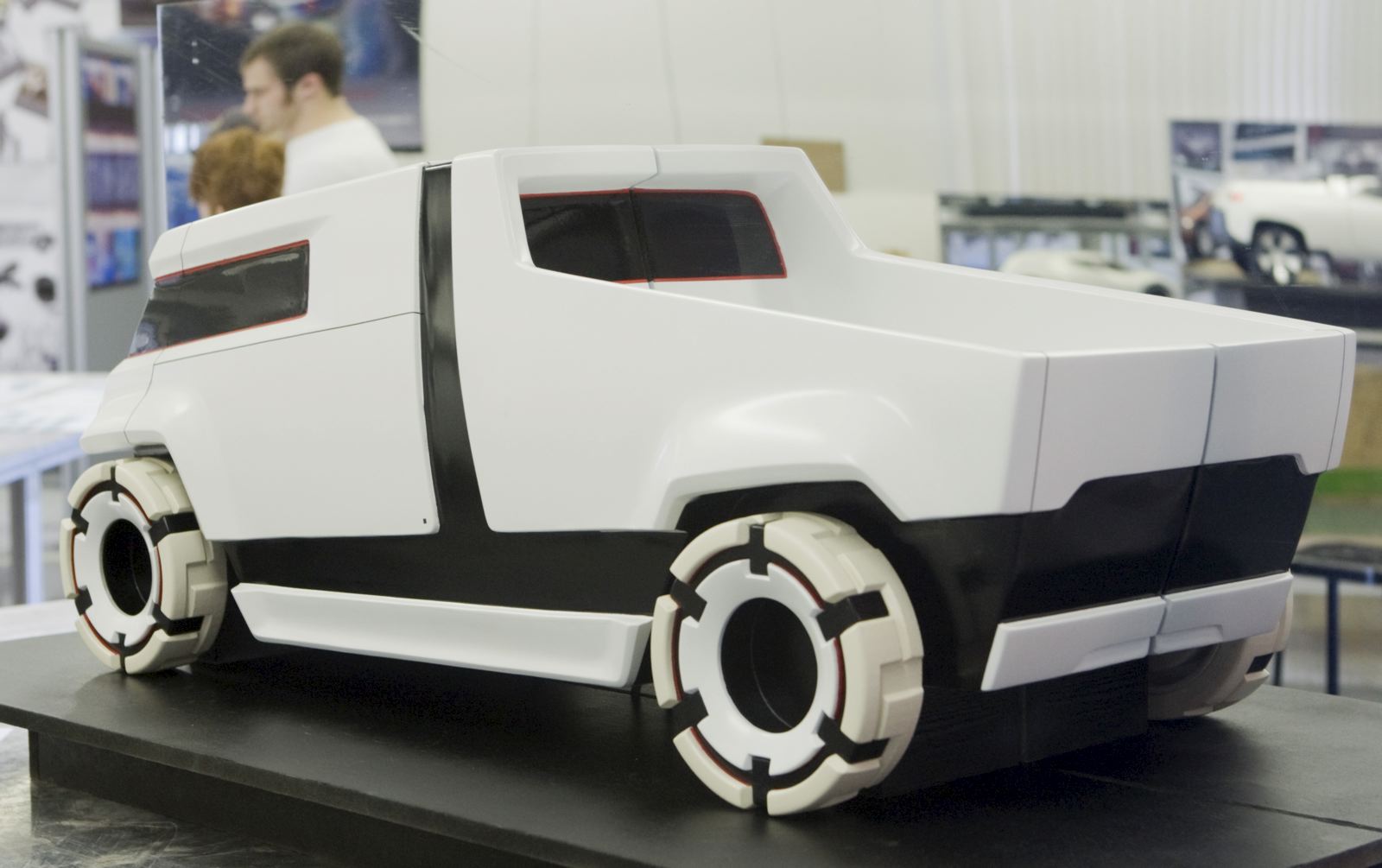 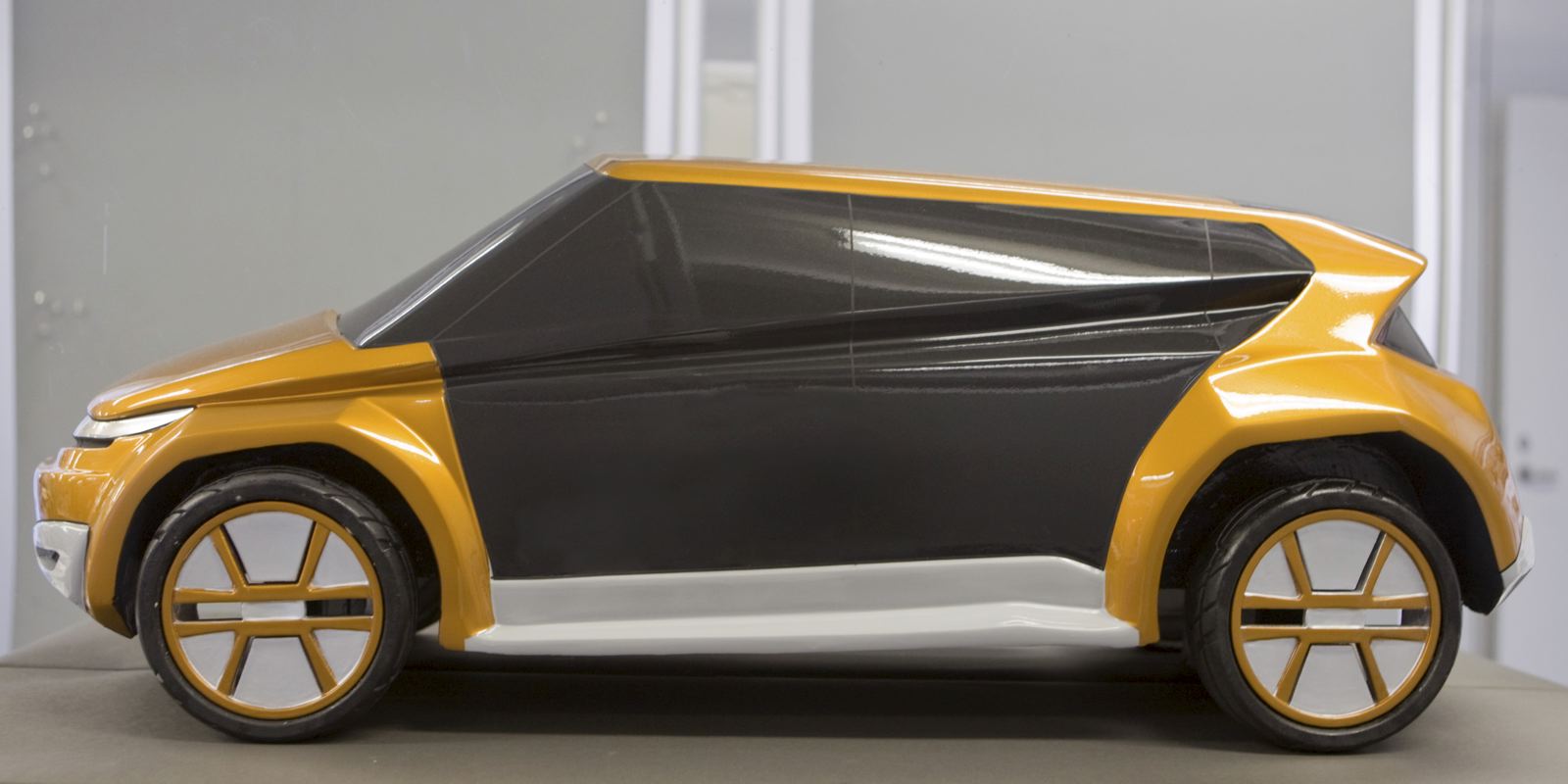 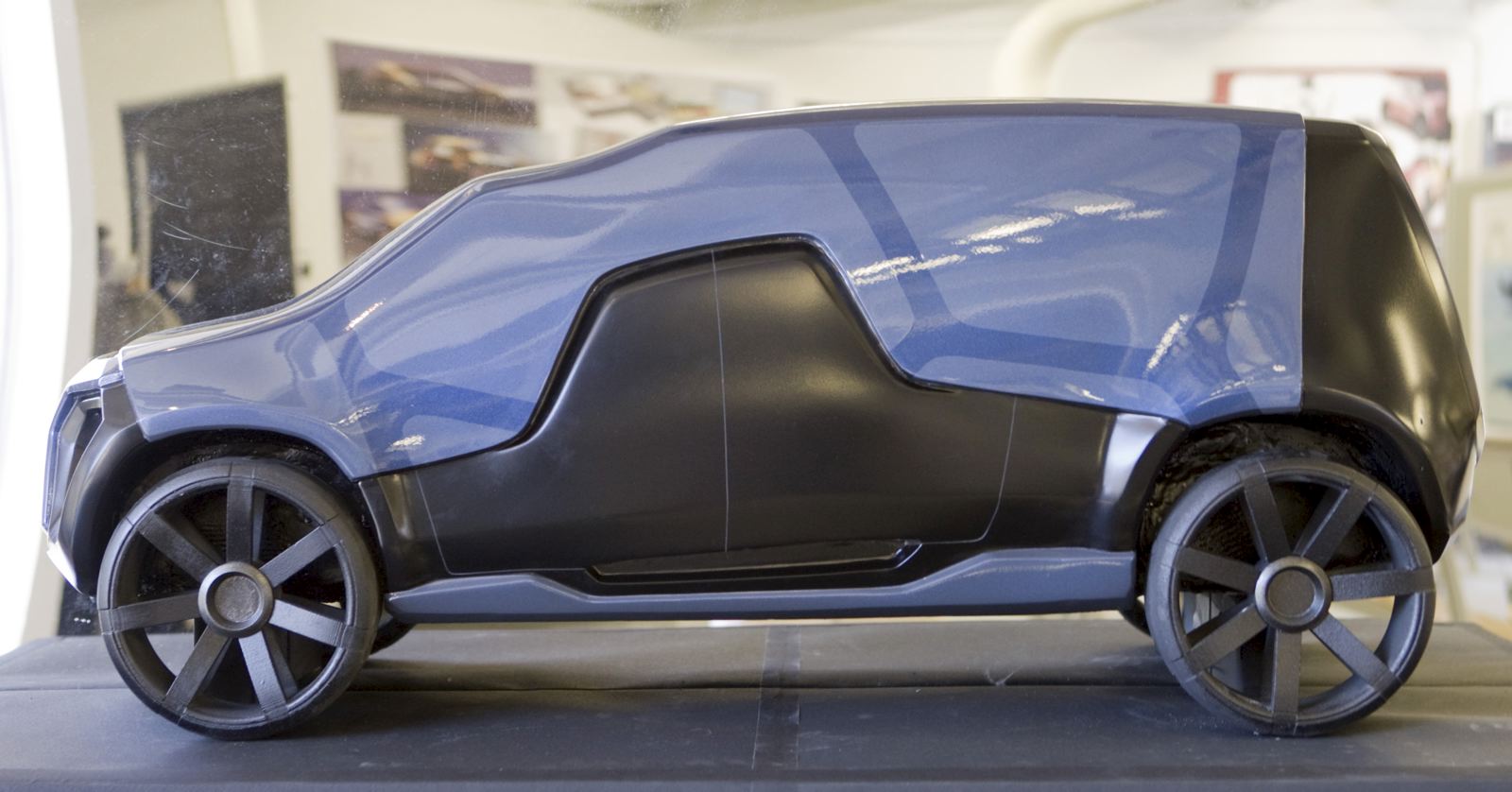 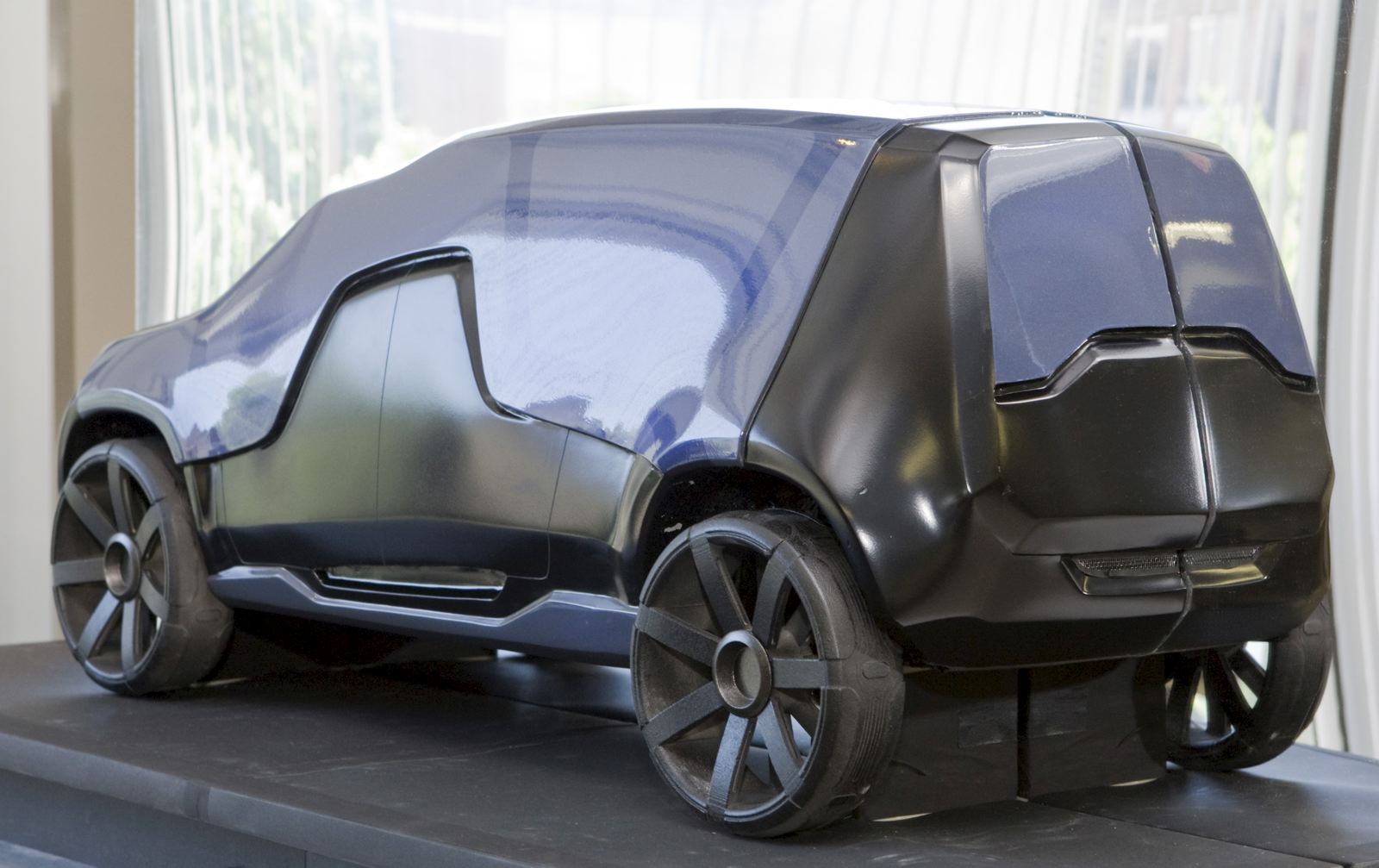 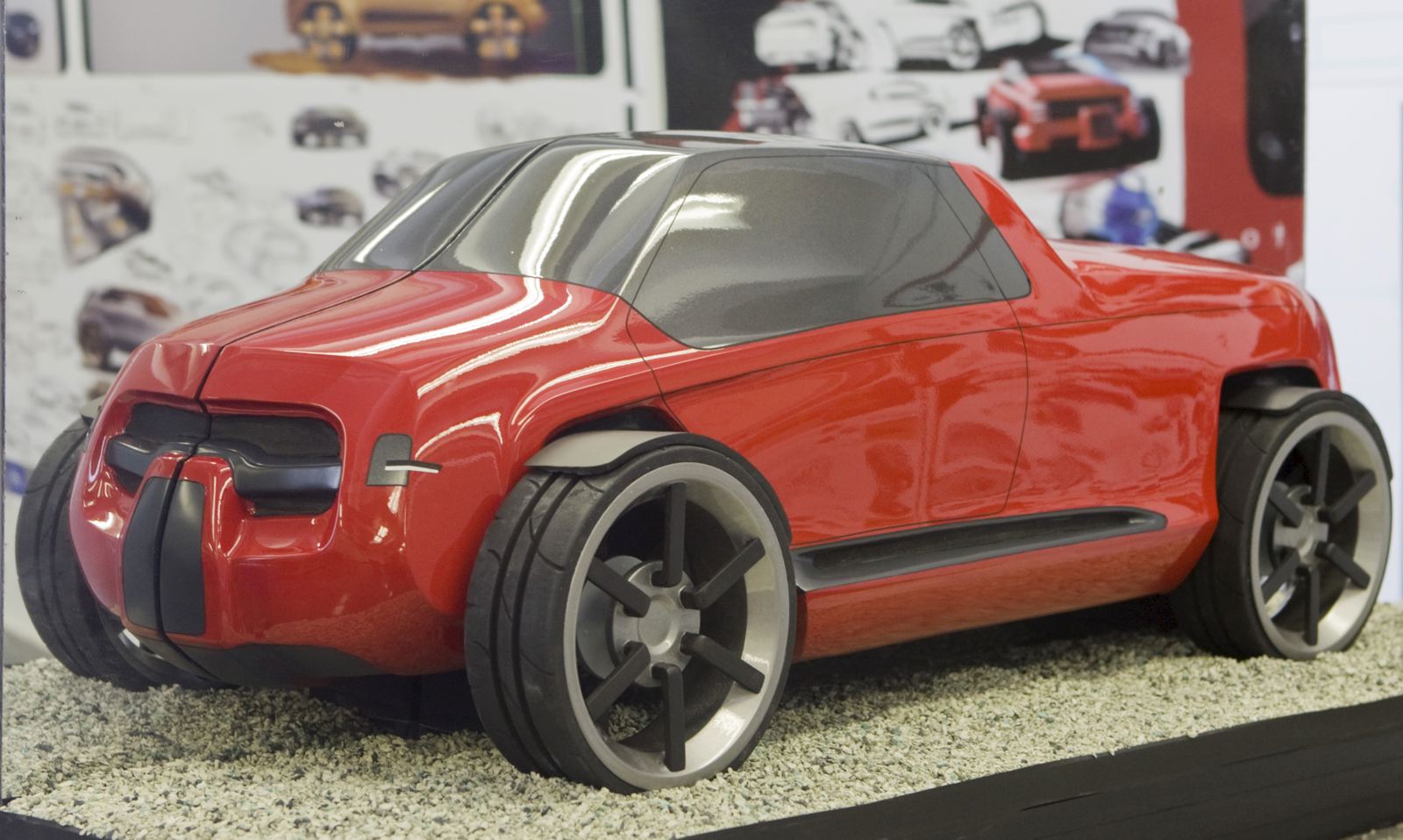 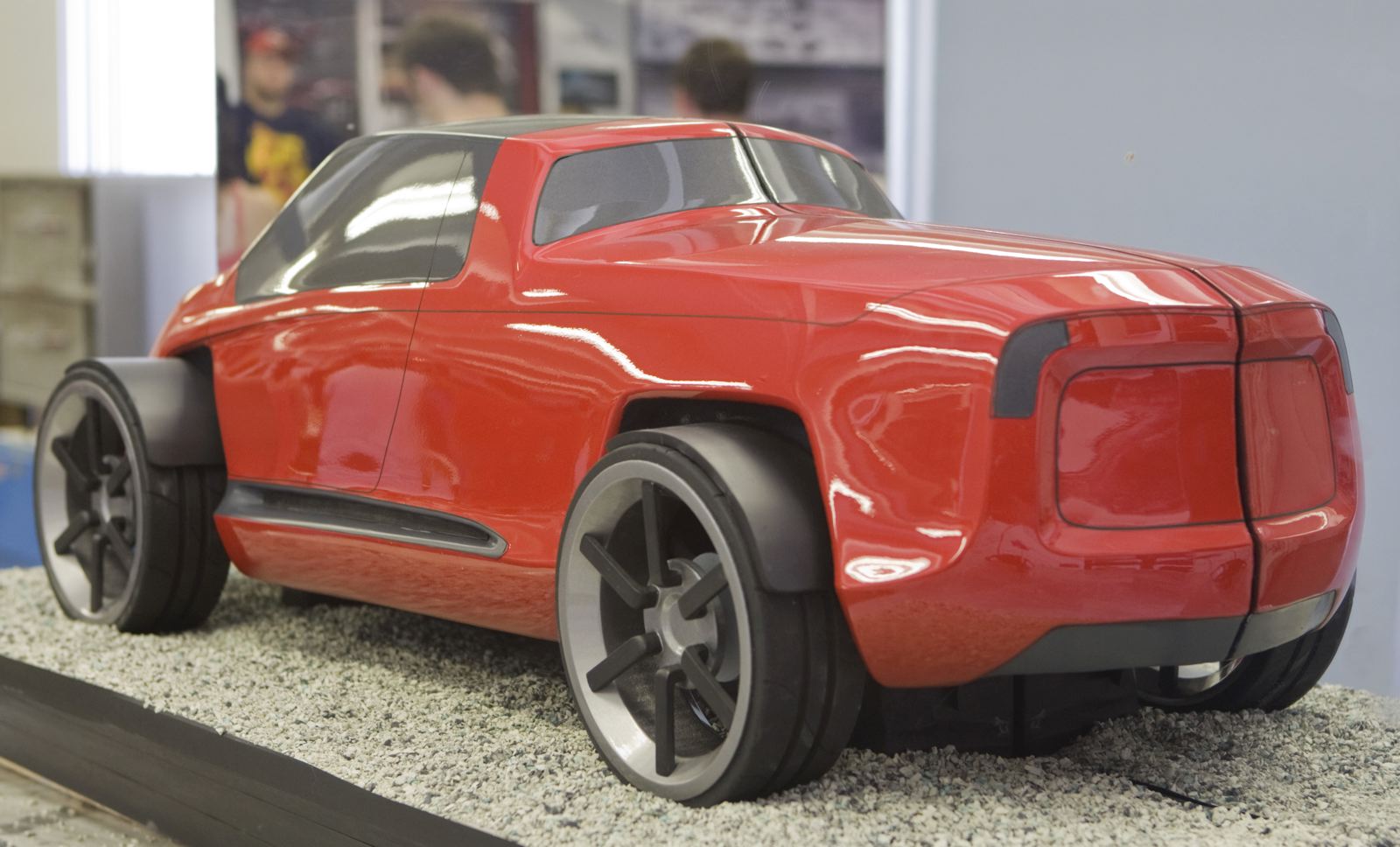 "Steadfast in 2030"
Jonny Wicks
Wicks drew inspiration from the heritage of Chevy trucks and the design direction the vehicles would take in the future in creating the theme for this project: "Steadfast in 2030". In addition to heritage, this design was inspired by two main images, the Chevy logo and the keystone in an arch, such as in the Brooklyn Bridge. The two halves of the truck are separate but unified, with all the trucks drivetrain components housed under the bed and rear of the cabin. This allows increased passenger and cargo space. With an overall footprint much smaller than the current Silverado, but with a larger cab and bed, the improvements keep the design simple, clean and functional.

2030 Chevy Tahoe
Laura Reilly
This vehicle was created with current and future mothers in mind. Recognizing that children are paramount to any mother, this concept features safety, storage, accessibility, style and visibility in its design. The vehicle maintains a high ground clearance for improved visibility, being only slightly lower than the current car. Reilly expects full-size sports utility vehicles to be smaller in the future, so the proportions of this new design are overall smaller then the current Tahoe.

2030 Chevrolet Tahoe
Clay Mastin
Mastin fused two ideal goals in the creation of this concept. The first was to create a strong and powerful vehicle that could accomplish any task, and the second was to design an eco-friendly vehicle with low environmental impact. The body of this vehicle is made up of a thermoplastic resin, which is as strong as regular steel body but significantly lighter. A carbon nano-tube reinforced aluminum frame, which also reduces weight, runs throughout the entire body for structural support. Though the concept is an eco-friendly vehicle, Mastin did not want the vehicle to appear underpowered. An aggressive stance accentuates its rugged appeal.

2030 GMC Yukon
Brad Smith
This 2030 GMC Yukon is designed to be custom tailored to the driver's needs. Aimed at the white-collar customer with blue-collar roots who are looking for a fashionable SUV that can provide utility, the vehicle can be outfitted in bespoke manner. Construction foremen, plant managers and middle managers have needs and aesthetics that are custom to their car buying requests. This SUV is intended to have a powerful stance while still being passively fashionable and fulfilling buyer's utility needs.

2030 SUT
Lukas Yates
"We Americans want a little bit of everything in our trucks" says Lukas, the creator of the open-wheeled 2030 SUT (Sport Utility Truck). The clean facets of modern-day hand tools inspired the subtle body surfacing, and the truck features all-wheel drive and an adjustable suspension, which enables the vehicle to be set up for on- or off-road driving at the push of a button. Opening up the wheel wells of the truck ties the driver to the mechanical motion of the vehicle, making it a more involving driving experience.

2030 Chevy Silverado
Andrew Kreyenhagen
The design solution for this 2030 Chevy Silverado centers on the themes of strength, power and utility. It is designed for those individuals who demand the power and comforts of a 2030 modern society. These people may be construction workers, contractors or simply Home Depot ‘do it your selfers' who require a truck to get the materials for the hobbies they enjoy.  The largest design feature is the mid-body suspension, which allows the front cabin and the rear bed to move independently from one another allowing for a comfortable ride for passengers and a more rugged ride for the cargo.