Italian design company Icona have sent us some advance images and details of their Geneva concept car, due to be unveiled next week. The Nucleus is an asymmetrical, aerodynamically-efficient one-box autonomous vehicle with a major focus on its six-person living-room-style interior, designed from the outset as an “executive lounge”  rather than a drivers’ car. 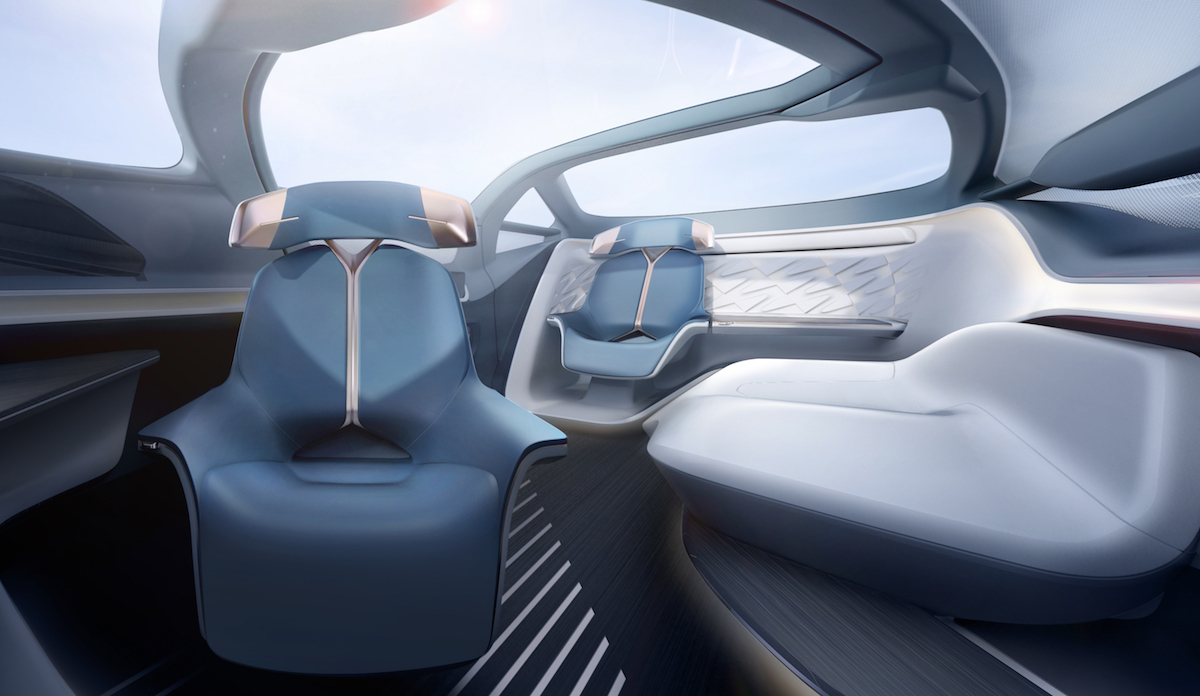 It’s an interesting version of the AV idea which many manufacturers are experimenting with, and takes luxury into the autonomous space in a very polished and thoughtful way. There are many more details on the company’s press release, which is below, and we look forward to seeing the concept in reality at the Geneva show. 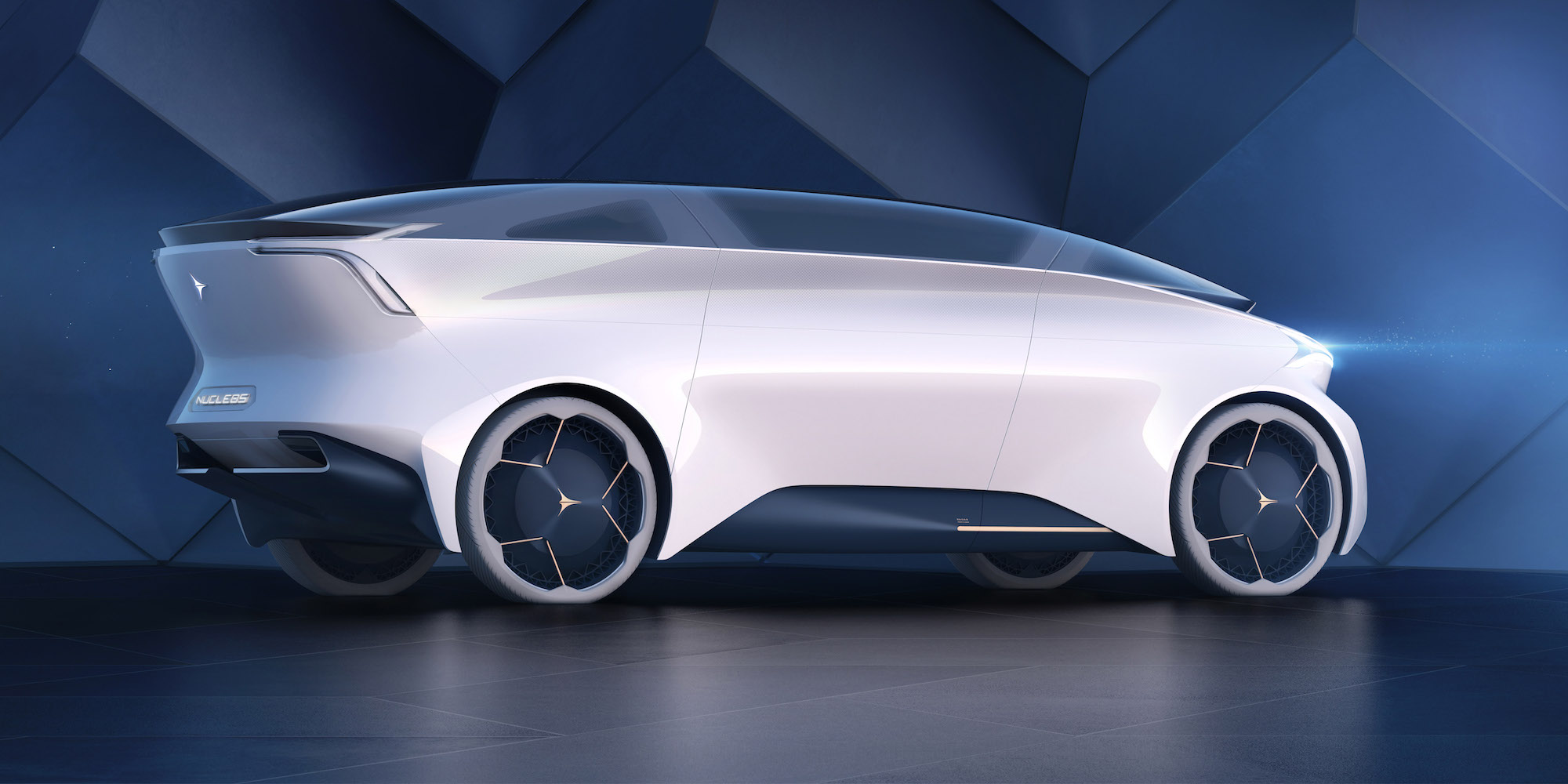 Nucleus represents the synthesis of futurism and a human-centered mindset. It takes the Icona Neo Concept one step further by reconsidering the very way that we use a vehicle.

Neo introduced us to tomorrow, Nucleus will introduce us to after-tomorrow.

The Icona Nucleus embodies Icona’s vision for the future of mobility. First seen in 2015, the Icona Neo concept demonstrated a very tangible tomorrow for the electric vehicle. With its fully autonomous driving level five, the Nucleus jumps two generations ahead. Inside the vehicle, the absence of a driver does not only mean the absence of a steering wheel and a dashboard, but the opportunity for a new understanding of mobile living spaces, where the focus is no longer the road but the destination.

Technology should be felt but not seen and so a “less is more approach” has been used, resulting in a fluid and sculptural body that combines the needs of both aerodynamics and ergonomics. Beyond its technological innovation, Nucleus also shows us the future for the next generation of cars. A generation that aspires to be socially responsible through respect not only for the natural environment but also for the human environment.

Mobility in after-tomorrow will be very different from today, with a large number of shared, self- driving, electric vehicles which will serve as individual or small group shuttles between mass mobility infrastructure and large hub destinations. Yet, the future will remain multi-faceted and cars will continue to express our individuality as much as our clothing does (and as our mobile phones used to until the iPhone). With a fully autonomous self-driving car, we can make so much more use of it than the current family car: it will take you to the airport, come back to pick up the kids from school then later take the grandparents to a doctor’s appointment. The car will spend much less time parked, and will be much more usefully employed on the road. One car will replace several cars, and by nature will be an excellent place to be: its use and versatility will be directly reflected in the multiple possibilities of its interior design.

The mono-volume exterior is unlike any vehicle you have ever seen. The shape looks purposeful and beautiful. The profile and surfacing look as though the vehicle was shaped to move efficiently and quietly through the air. Being fully autonomous, there is no side glass in the traditional sense, rather semi-transparent bodycolor panels that allow the occupants to see out from the vehicle but remain shrouded for privacy while traveling. The upper glass from windscreen to the complete roof is asymmetrical, divided into fully transparent and semi-transparent glass, giving a distinct visual cue that this vehicle is something truly different.

The Icona Nucleus looks like a self-moving executive lounge, characterized by a long curvy side line which emphasizes the cell nature of the vehicle. Like a protective bubble, the Nucleus protects and embraces its passengers, at the same time offering a stunning view to the outside, thanks to an extremely wide glass surface which constitutes the majority of the upper body.

The glass is partly transparent and partly semi-transparent, and the two portions are marked by a diagonal line which crosses the roof from front right to back left. In effect, the body is asymmetrical, with just one door on the right side and therefore two very different sides.

With a length of 5.25 meters and a width of 2.12 meters, the Nucleus stands at 1.75 meters high on 26 inches wheels. Its slick aerodynamic design with full underbody diffuser and wheel arch aerodynamic blade extensions bring the CX to just under 0.25, a very good number that definitely helps its rolling resistance and energy consumption.

Now that all occupants are passengers, their interaction and the individuality of their personal space become a priority. The Nucleus can easily accommodate six people. Seats can be moved with flexibility, even transforming into a couch. One large seat in the front and one in the back make it as comfortable and cozy as a luxury living room. If you are heading to a five star hotel, sitting in the Nucleus will make it seem as if you are already in your room. A small table and all necessary spaces and connections for a laptop are available, so that even the shortest trip can be effectively used for business or leisure.

Nucleus reconsiders the way we access and live in our car, pushing the boundaries of interior space-driven design with an airplane-inspired interior simplified to its most pure form. No longer should we be compelled to sit in a line, with the windscreen and the road ahead as our only focus.

With an asymmetrical approach and different seat designs and configurations, spending time together inside Nucleus means more freedom and flexibility; people enjoying their time together and configuring the space according to their mood and preferences that day.